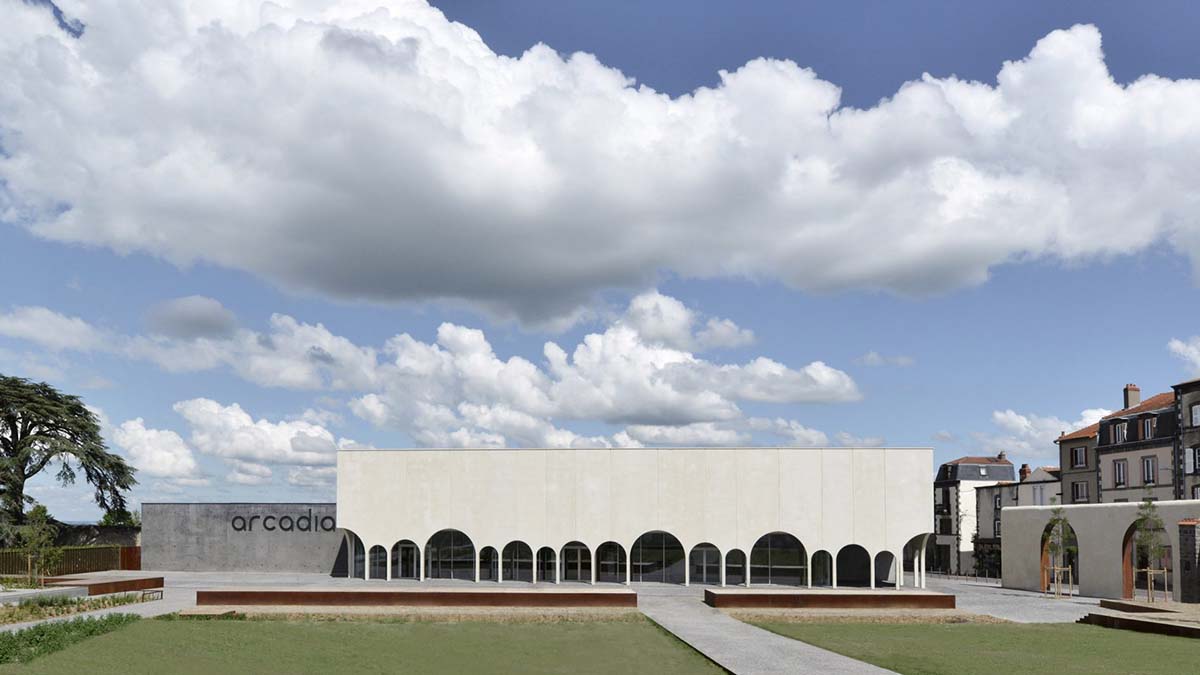 Paris-based architecture practice TRACKS has used an existing wall of a convent to create an irregularly-arranged colonnaded cinema in Riom, France.

The project, called Cinema de Riom, was transformed from the old Redemptoristine convent into a new multi-cinema project, which was redeveloped as part of Jardin de la Culture project near the historic centre of the town.

In the new version of the building, the new program offers: a multimedia library project, a music school (reconversion of old convent) and the cinema project. 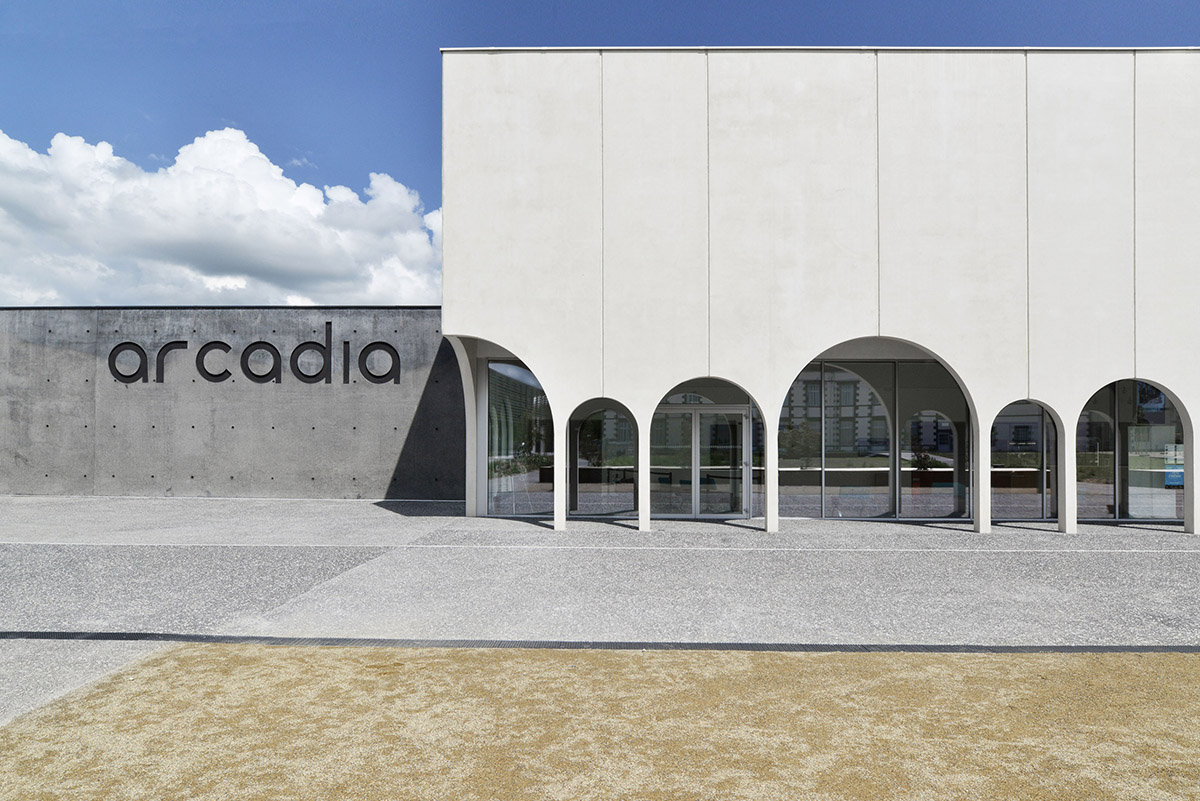 A white colonnaded arches wrap the building and create a secondary element in which it forms a hidden passageway inside. A visitor can circulate around this white-colored shelter.

"For this project, we have worked in collaboration with the communes’s community of Riom Limagne et Volcans and Frédéric Emile, the operator. This project consists in 3 cinema’s room with 543 seats and a 112 seats conference room," said TRACKS. 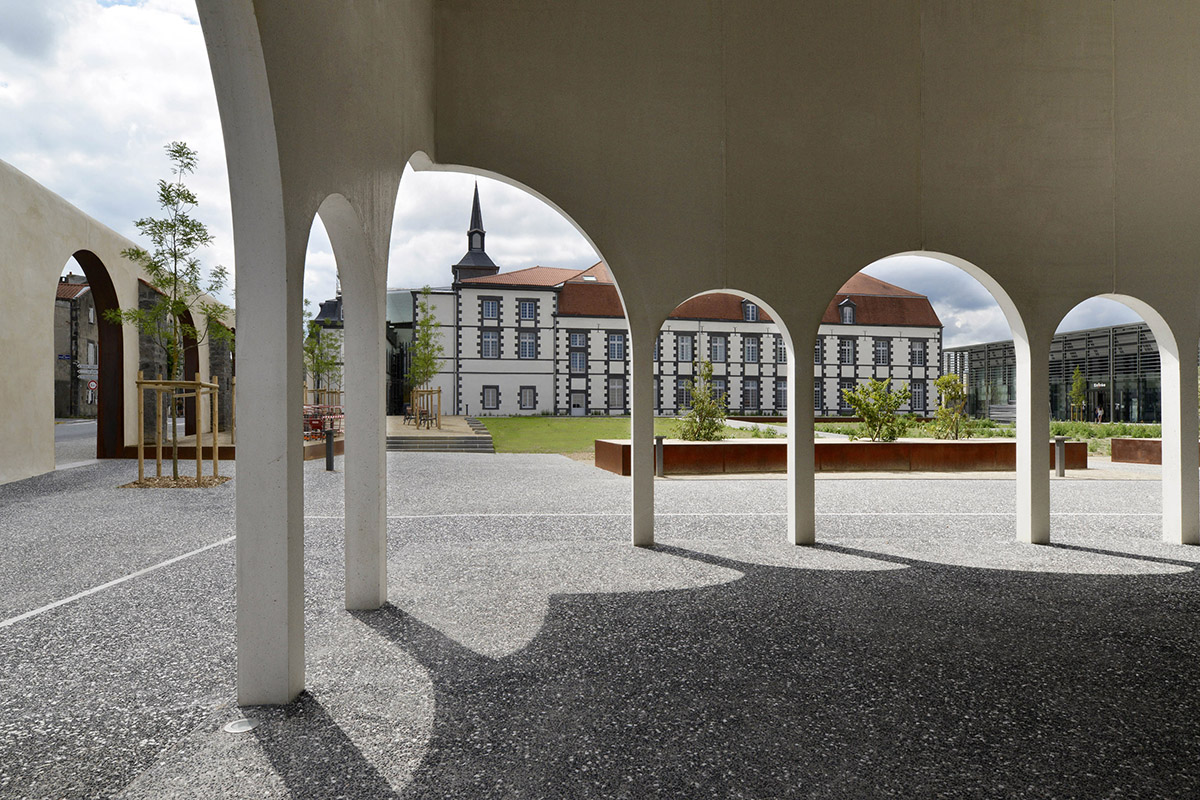 In the first volume, the architects borrow the new height from the wall of the existing building. Constitutive of the existing wall, "Volvic stone" offers a material available to be reused as large aggregates for the concrete of the outer sails of the first low volume.

Treated in a dark hue, the facade will be finally bushed partially, at variable heights letting reappear in his mass, the stone fragments of the old wall evoking traditional masonry. 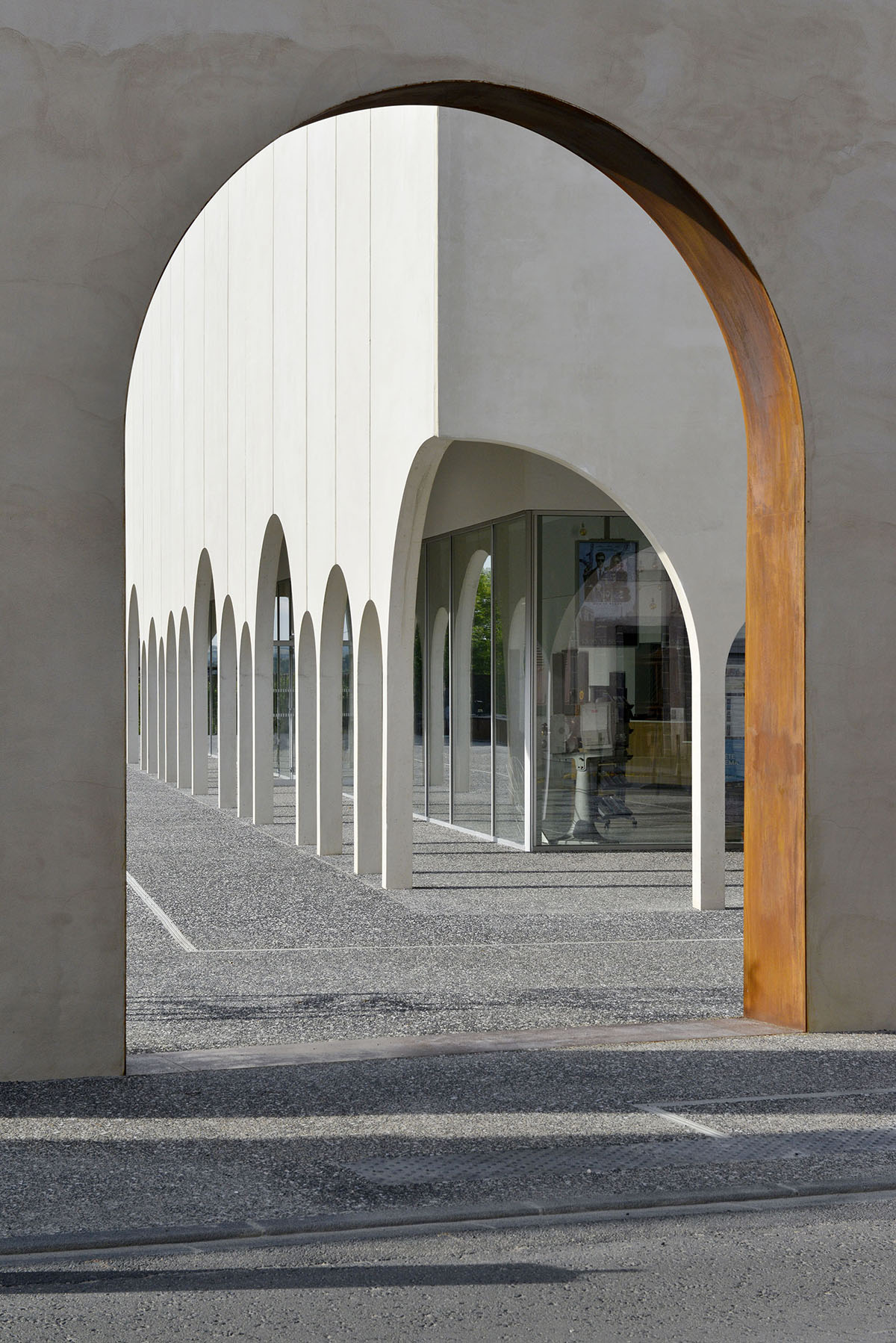 "The facade thus marks the footprints of a new history of the place and reinterprets in a contemporary way the use of a local identity material, by having their aesthetic dialogue," added the firm. 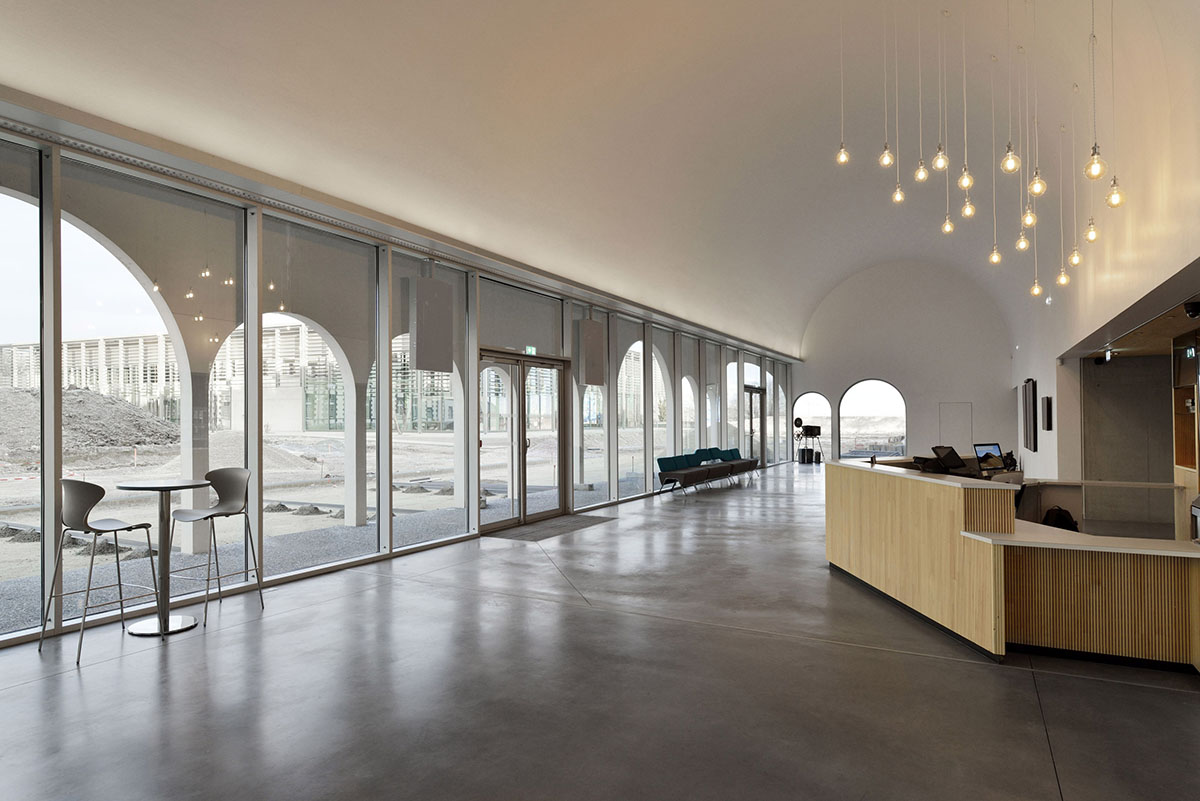 A second volume with marked scale and proportions, imposes itself as an urban signal above the seat orchestrated by the wall.

A concrete white monolith dyed in the mass comes to take support on the ground, by an apparent fragility, on a succession of arches, in front of the "Jardin de la Culture" and the "couvent des Redemptoristines". 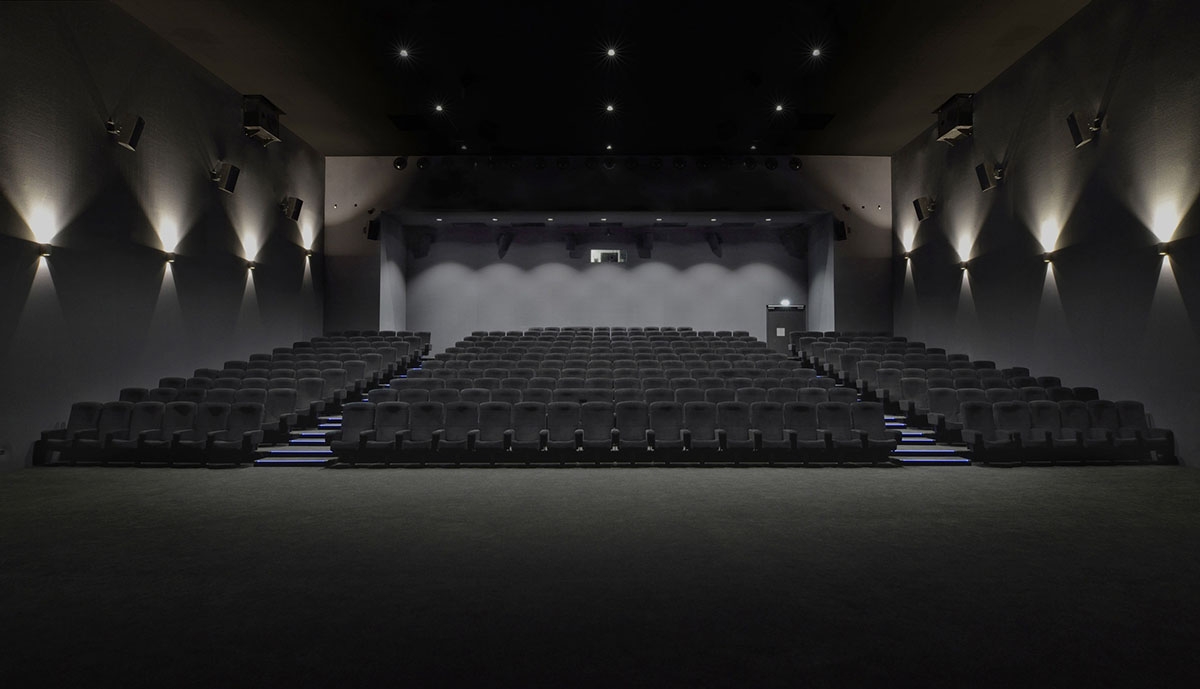 This identity strengthens the fantasized image of a cloister around the large plant parvis. This volumetric division in foot opens generously the large gallery of the cinema hall to the outside. The invitation is made: Go through these monumental doors, bathing this living space with light. 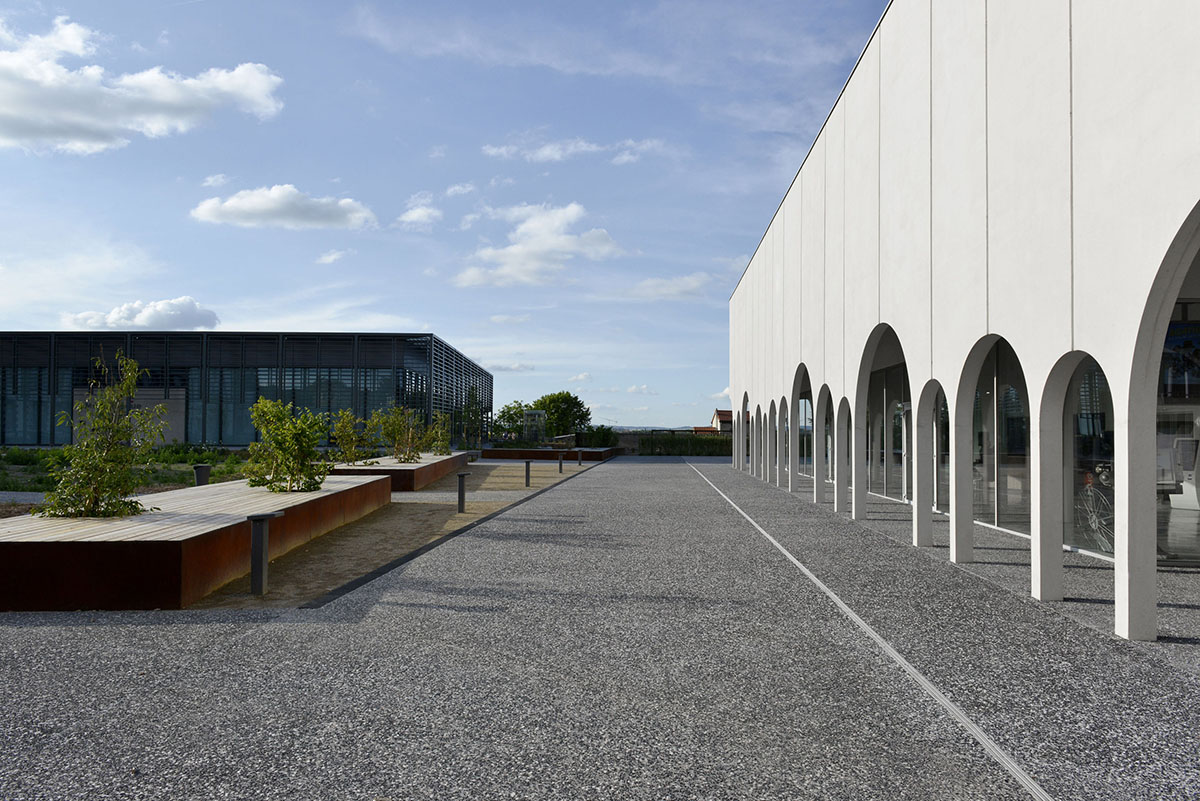 A large exhibition hall, offers a majestic input volume. This one opens very largely on the "Jardin de la Culture". This generous and continuous space is extended by a covered outdoor gallery perforated by the arches.

To access at movie theater, the spectator borrows a hallway, which is articulated around the conference room. This plan’s organization manage viewers flows by proposing a quality path around the topic of the cinema’s world. 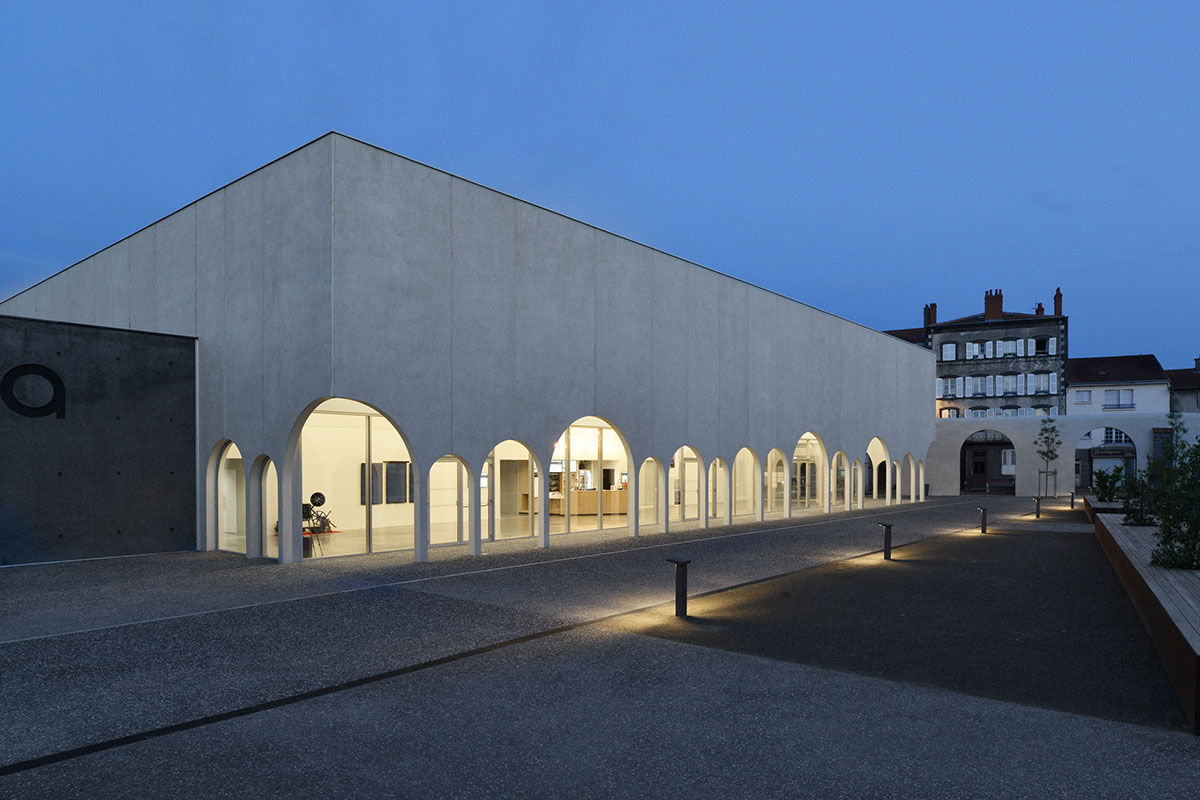 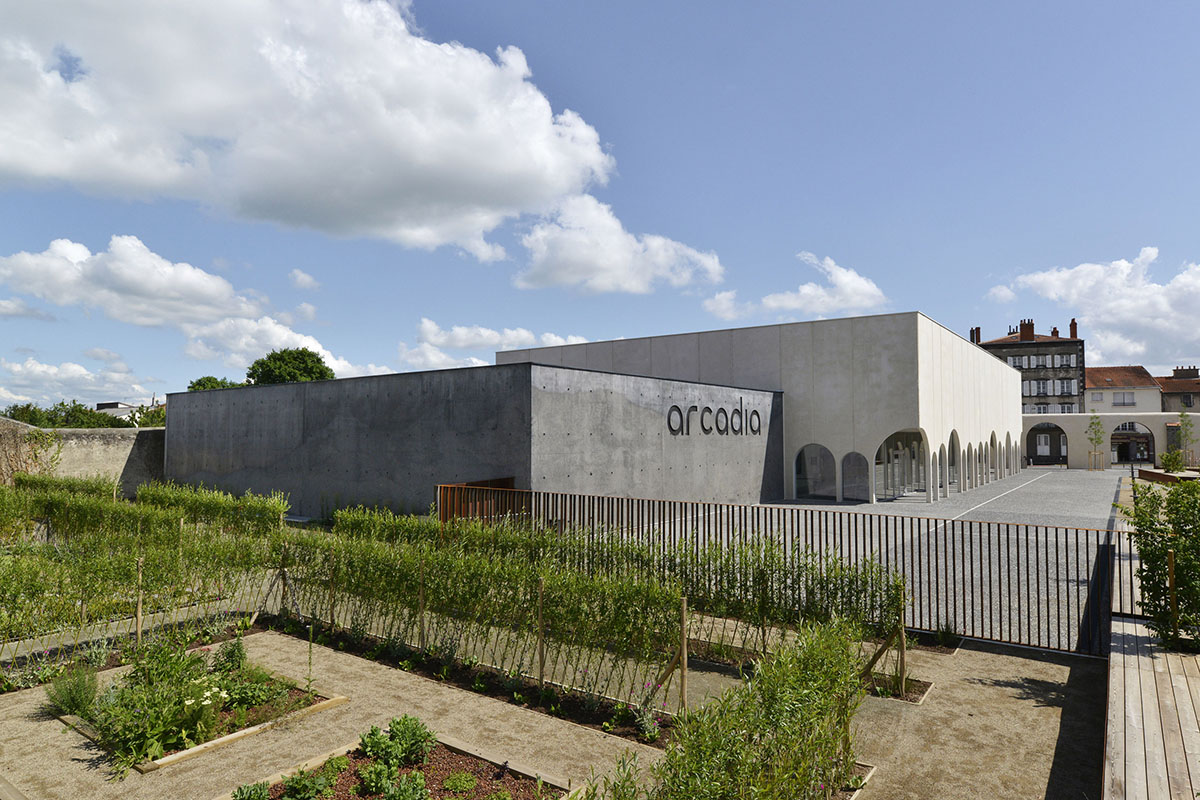 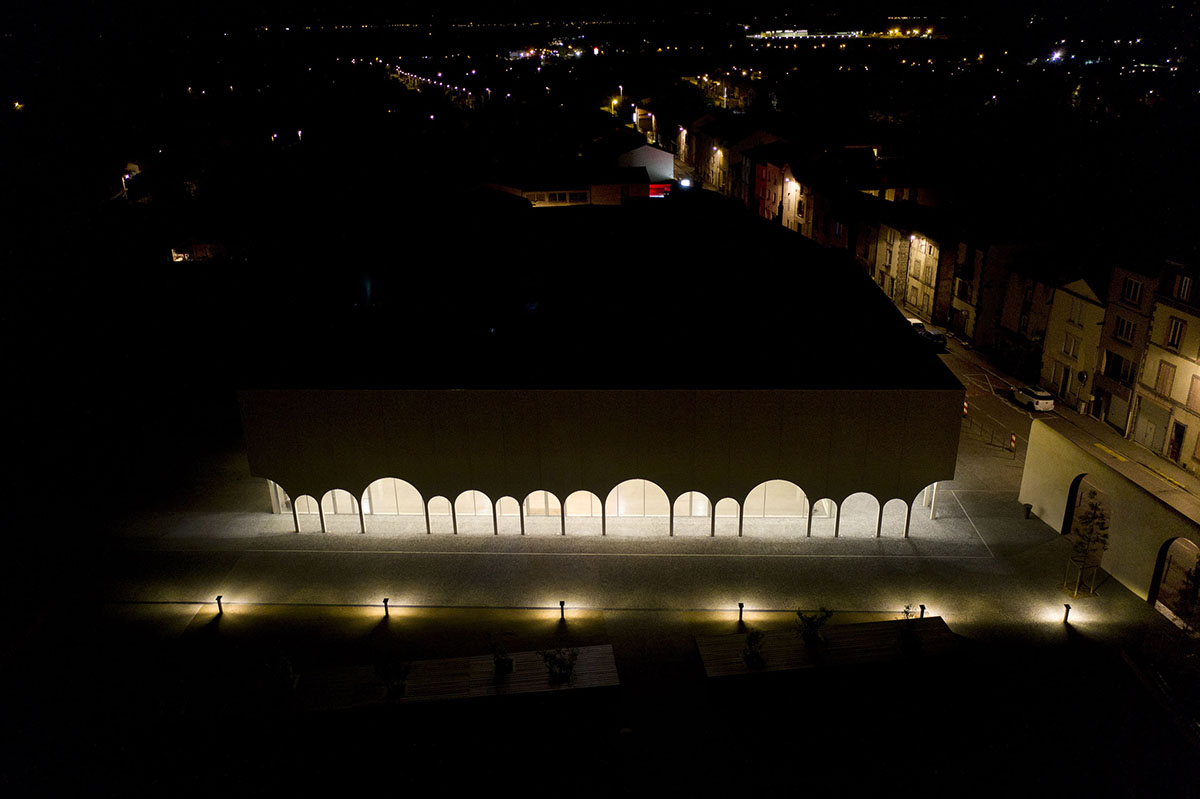 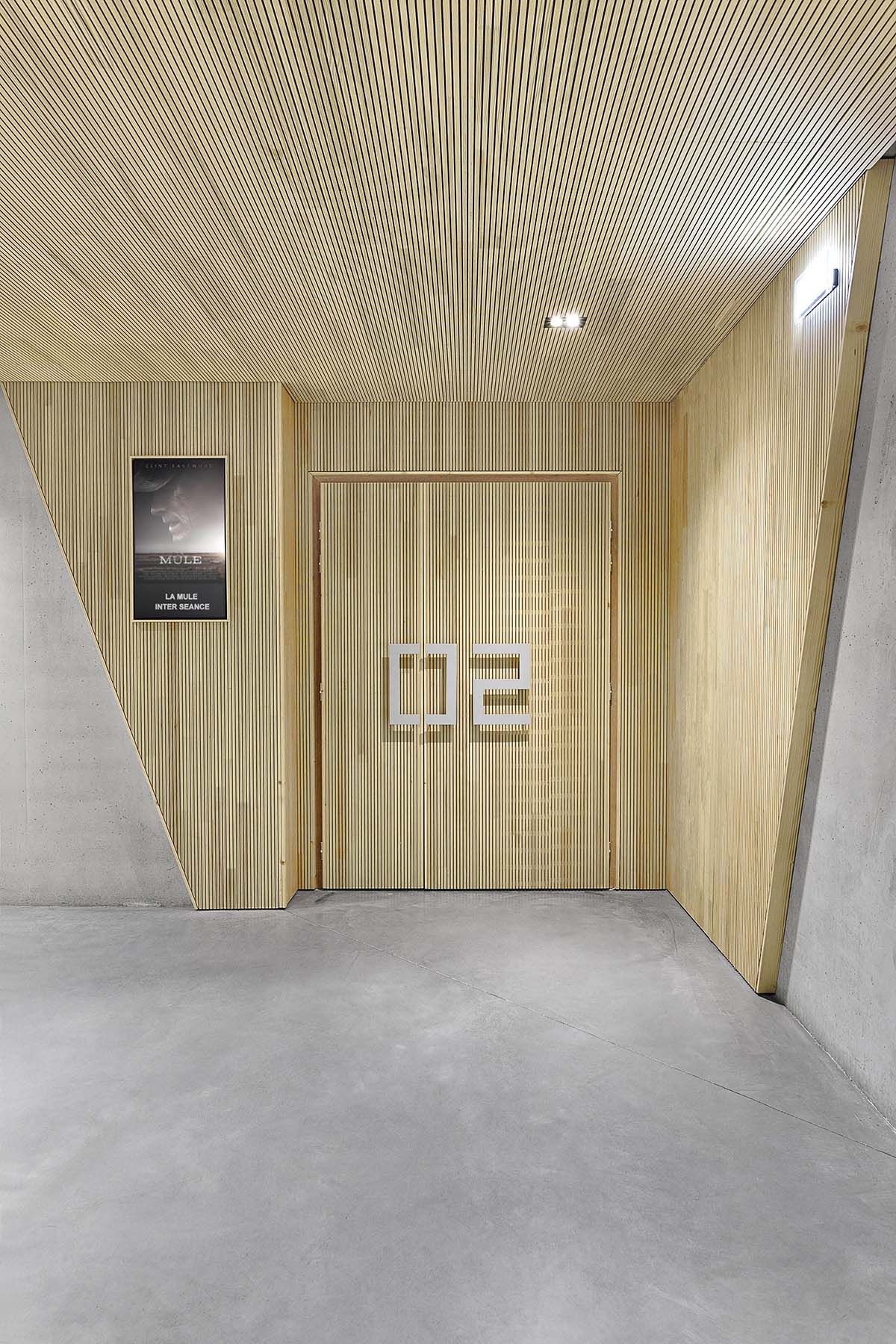 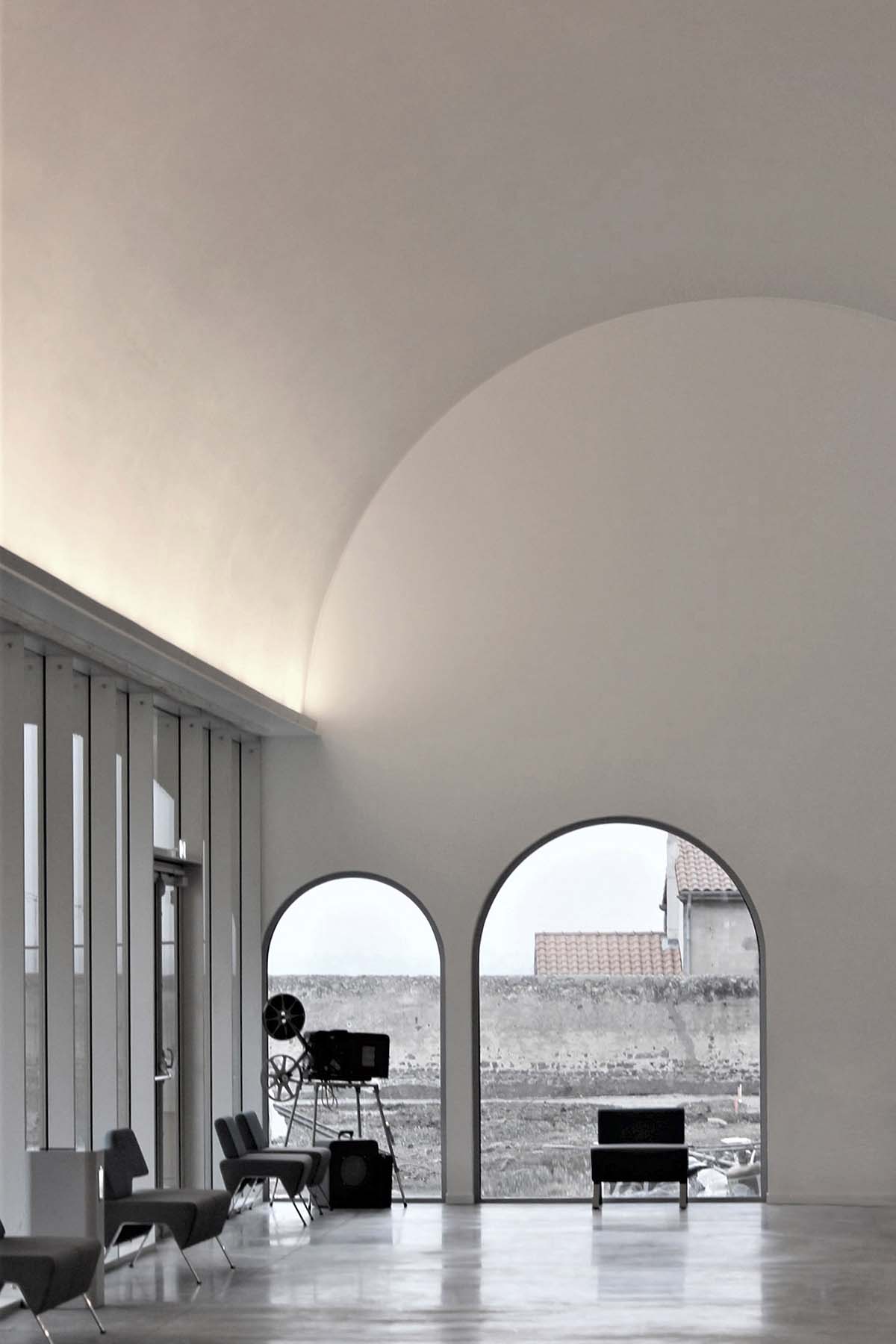 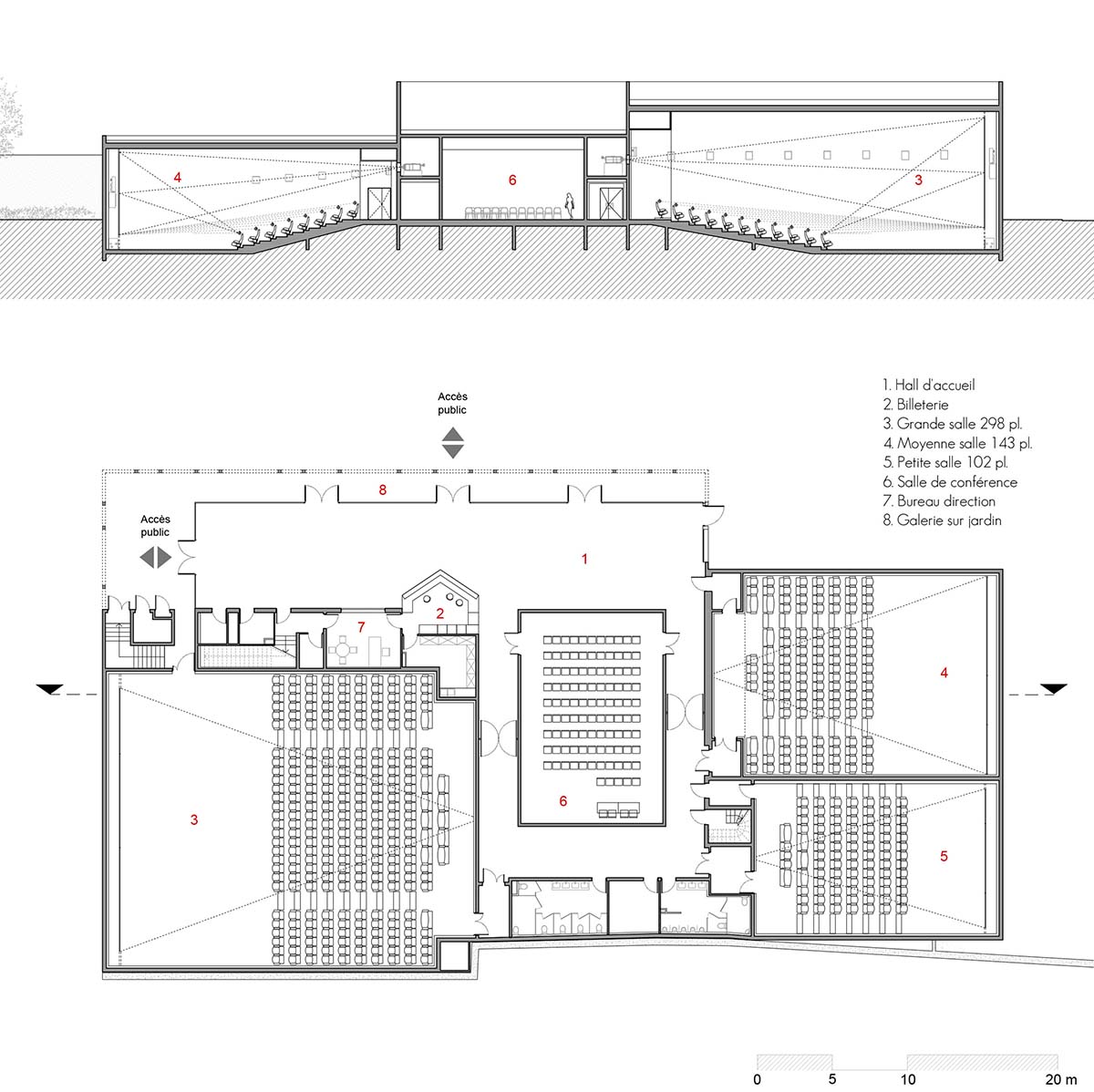