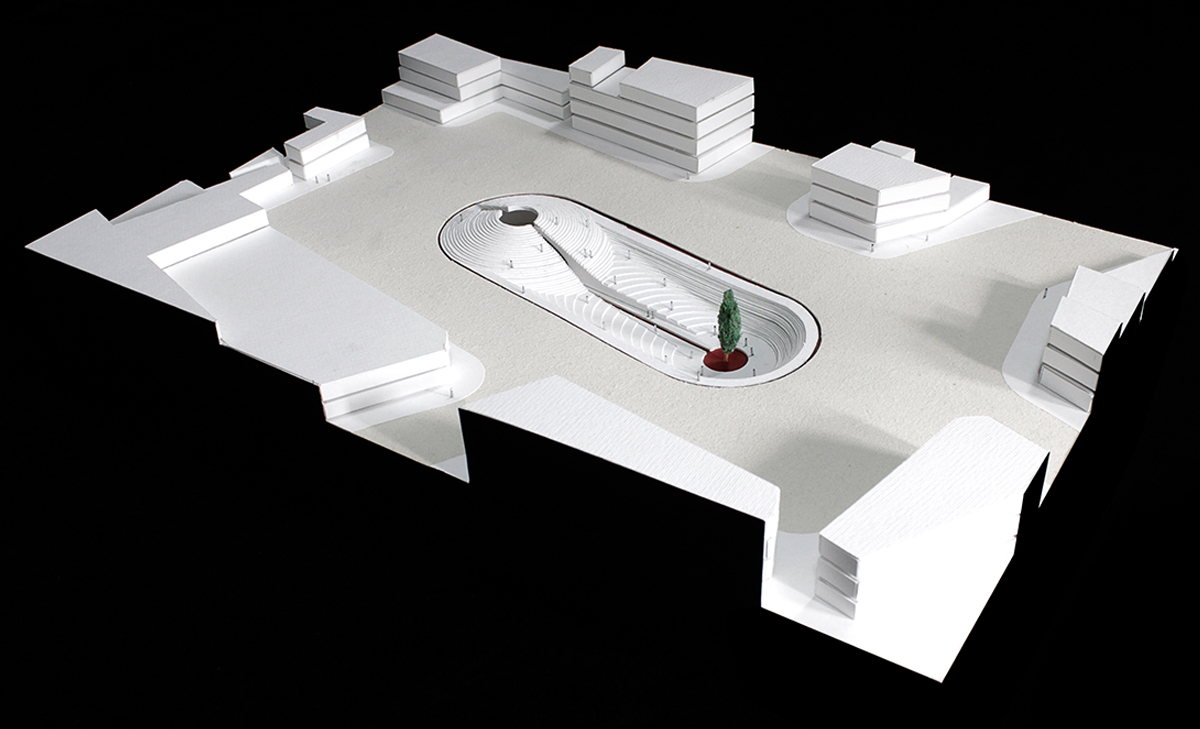 The Iraqi imposed war against Iran is one of the wars of the modern era, which lasted for eight years (1367-1799). On September 31, 1359, a national attack began with the use of maximum military power and crossing international borders and invading Iran. During this unequal war imposed upon the people of Iran, many of our compatriots came to martyrdom, a testimony that has long been associated with the flesh and blood of people of this country and there aren’t many Iranian families who haven’t had any martyrs in them. The Martyrs’ square of Arak, which is the main square of the city of Arak, also reminds that the people of this nation never forget the anonymous compatriots who sacrificed their lives for the preservation of the religion and security of dear Iranians. 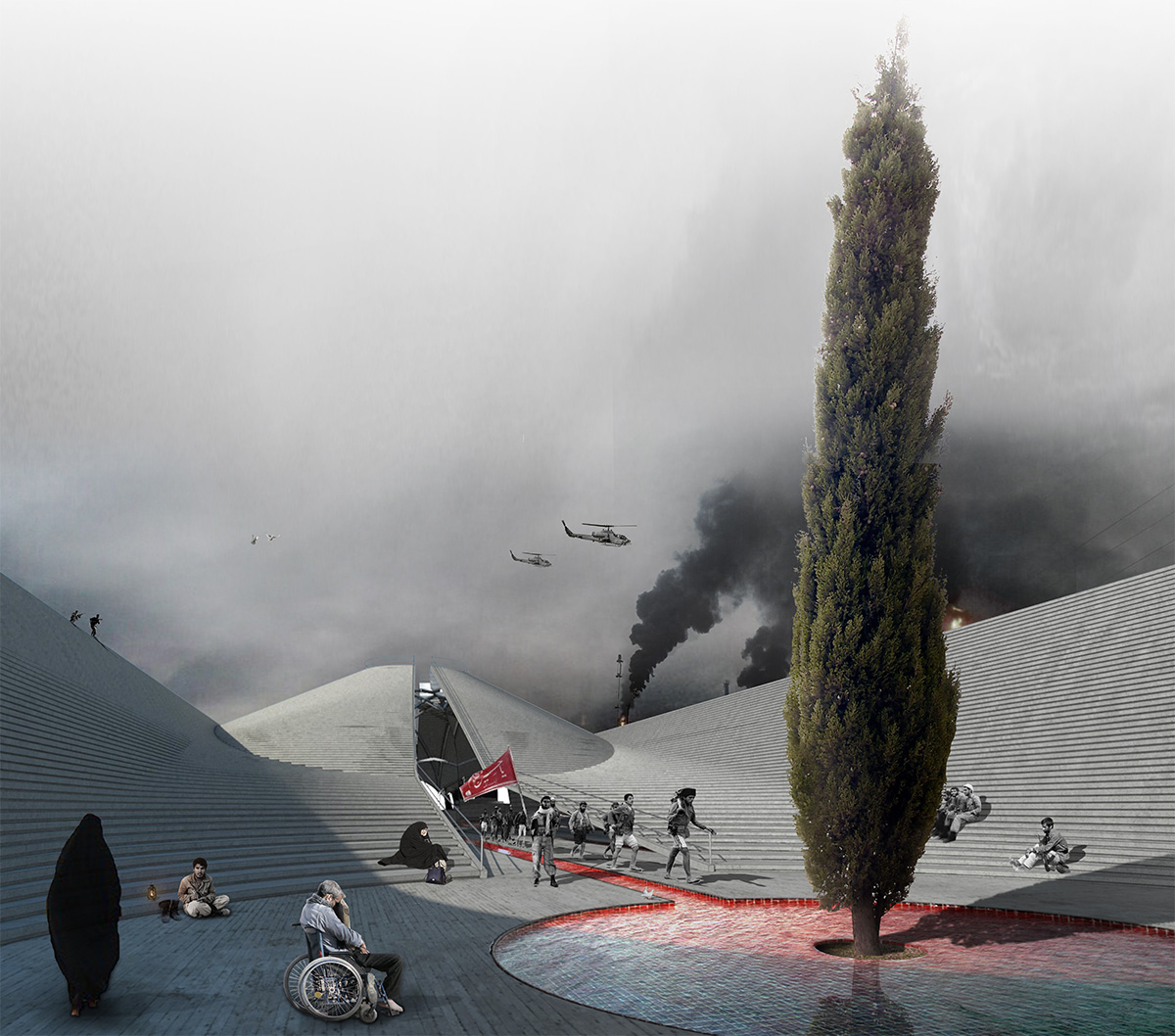 In the past, Arak has been fenced and dug. Due to the fact that in the design process, the city, and its history should be considered, we consider the project of the Martyr's square of Arak as a city and the runway is a symbolic sign of the existing ditch in the city where water flows. Water is a sacred element in Iranian architecture, the source of life and existence, as well as purity and wellness in the center and around the square. But due to the name of the square which is taken from the martyr's status, it is created in a red metaphor that refers to the martyr and martyrdom. 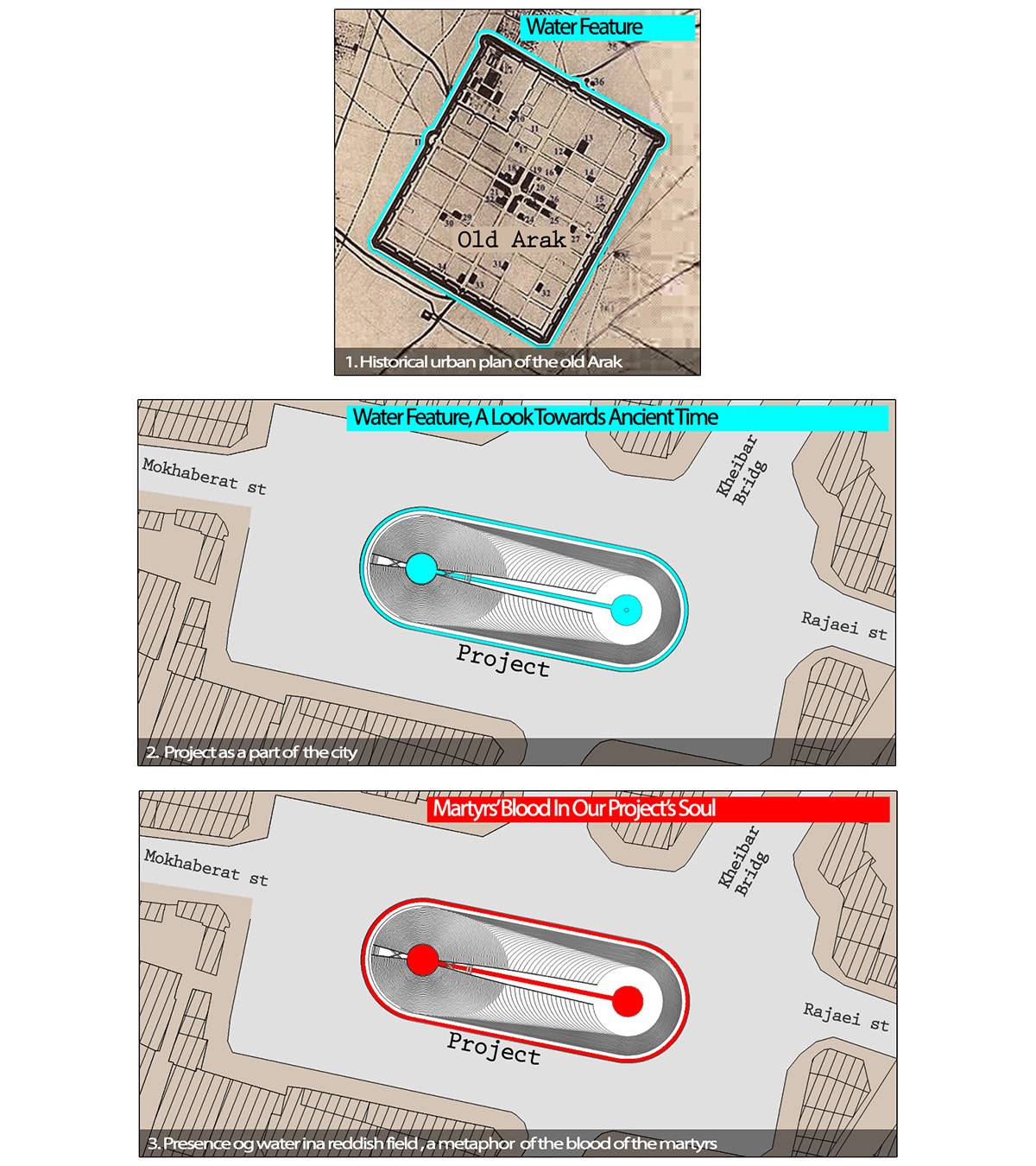 As it was said, in the design of the Shohada Square project, "square as the city", is the purpose of the project.

To achieve this goal, the effective factors and grids on the project were analyzed, resulting in obtaining some directions in the project. The east-west axis of the square is of great importance due to the stretching quality of the square for designing urban plaza. 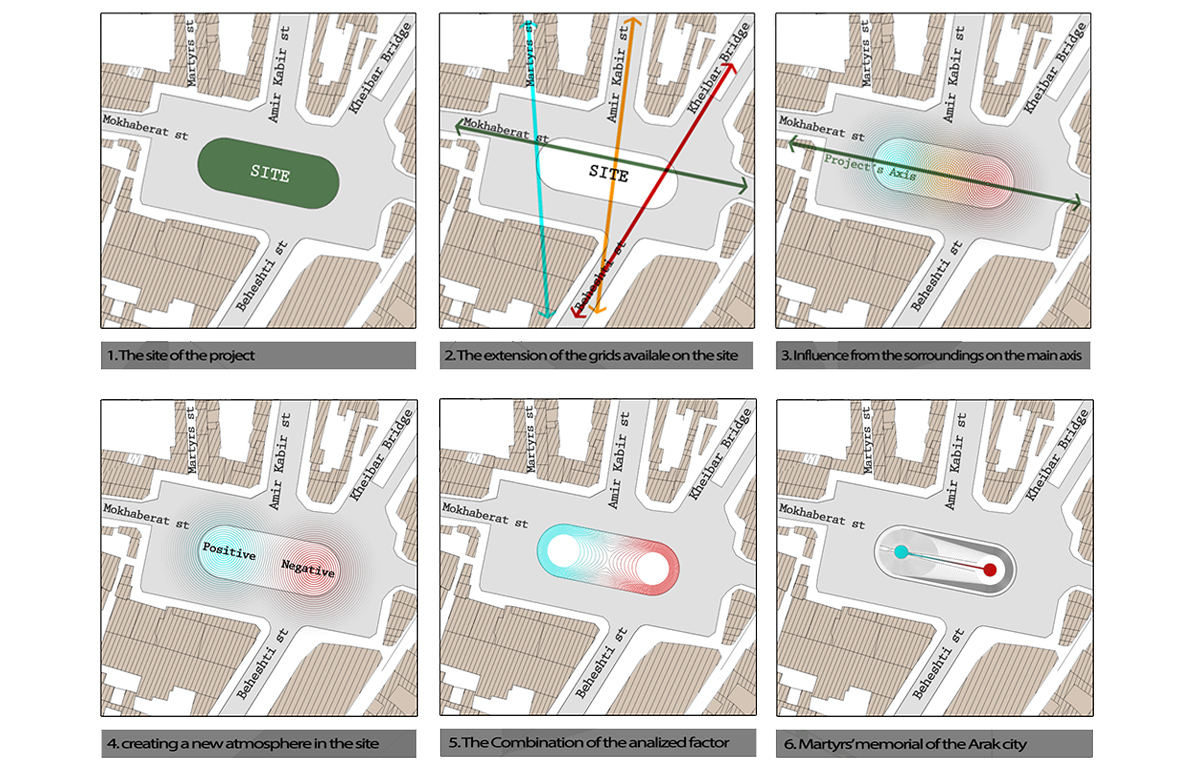 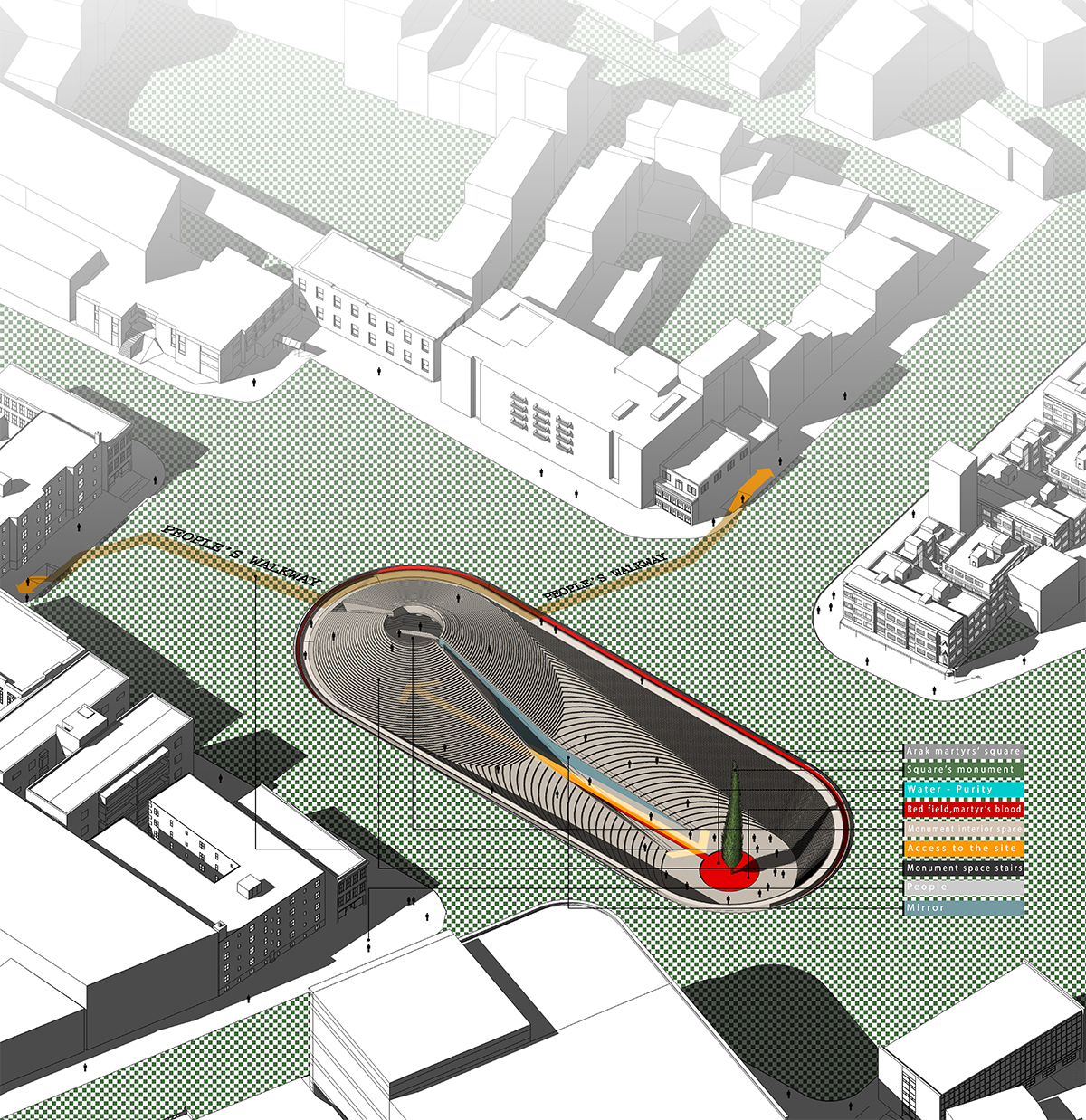 To continue the presence of people in this project, it is suggested that in one or two existing acres, we can design a subway to create a trade center for people who have been existed in the past Iranian architecture which also easily connects pedestrians to the project site. 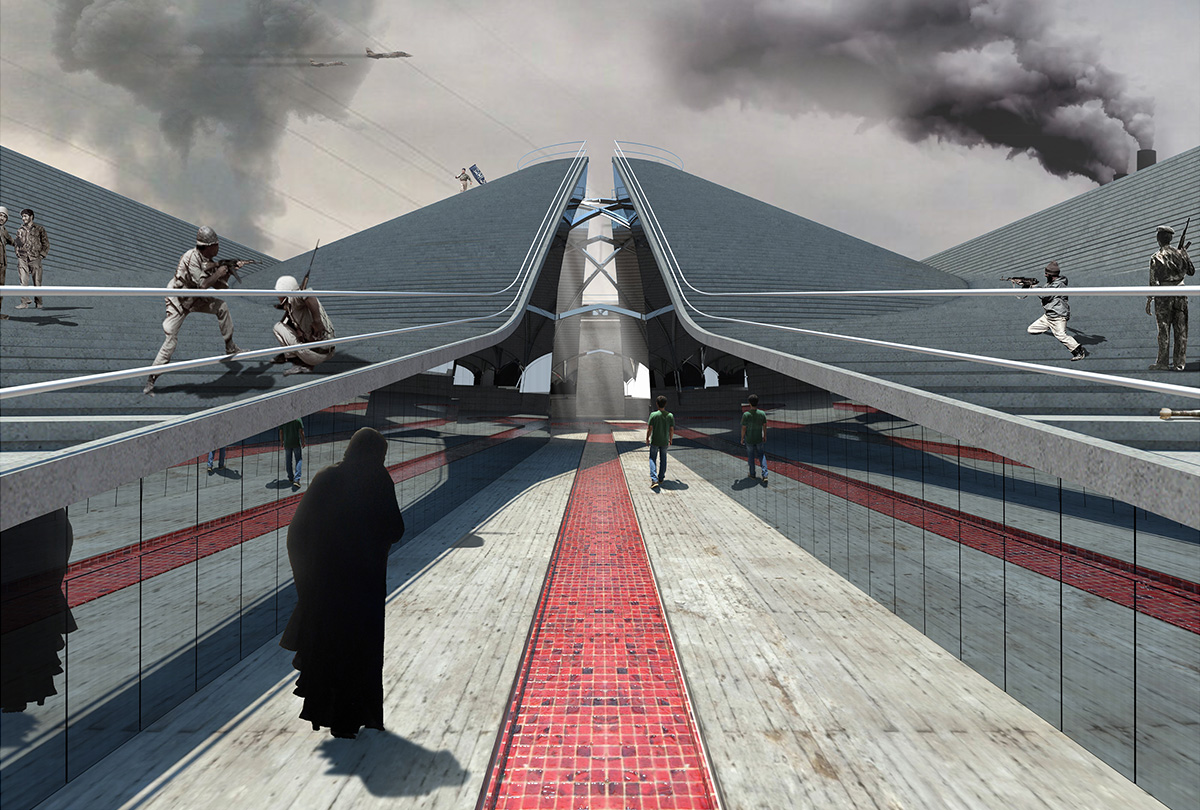 Other results from the study of axes are the two important points in the two extreme fields, both of which are created for the presence of people, but with two different approaches.

At first, the eastern point is due to its location along the north-south street, as well as the presence of memorials (in a lower position than the ground level) and in contrast to the dome-shaped space which negative space is the image of the eastern atmosphere. In such a way, it would be possible to stir up a sense of belonging to the past. The water axis, which is considered as one of the most important elements in Persian gardens, in this project also gives the color and odor of the garden a different kind of expression, indicating the flow of life in the city, with the difference that it has a metaphor of the martyrs' blood by the selection of red color.

The project space has been designed and constructed in a way that the audience who travels from the urban space to the project feels changes slowly but tangibly. In fact, the project has a contemporary space, an interdisciplinary space, and a past space of Iranian architecture. The exterior shell of the square indicates contemporary architecture and on the inside, it expresses the function of past Iranian architecture. The audience travels from the present day of the city to its history and returns to the present place of the city again.

Cedar; our memorial is not made by human hands, but we have tried to create a suitable space for our memories to grow, memories to breathe; to live; to shake in the wind; to speak to the people in the contemporary language. 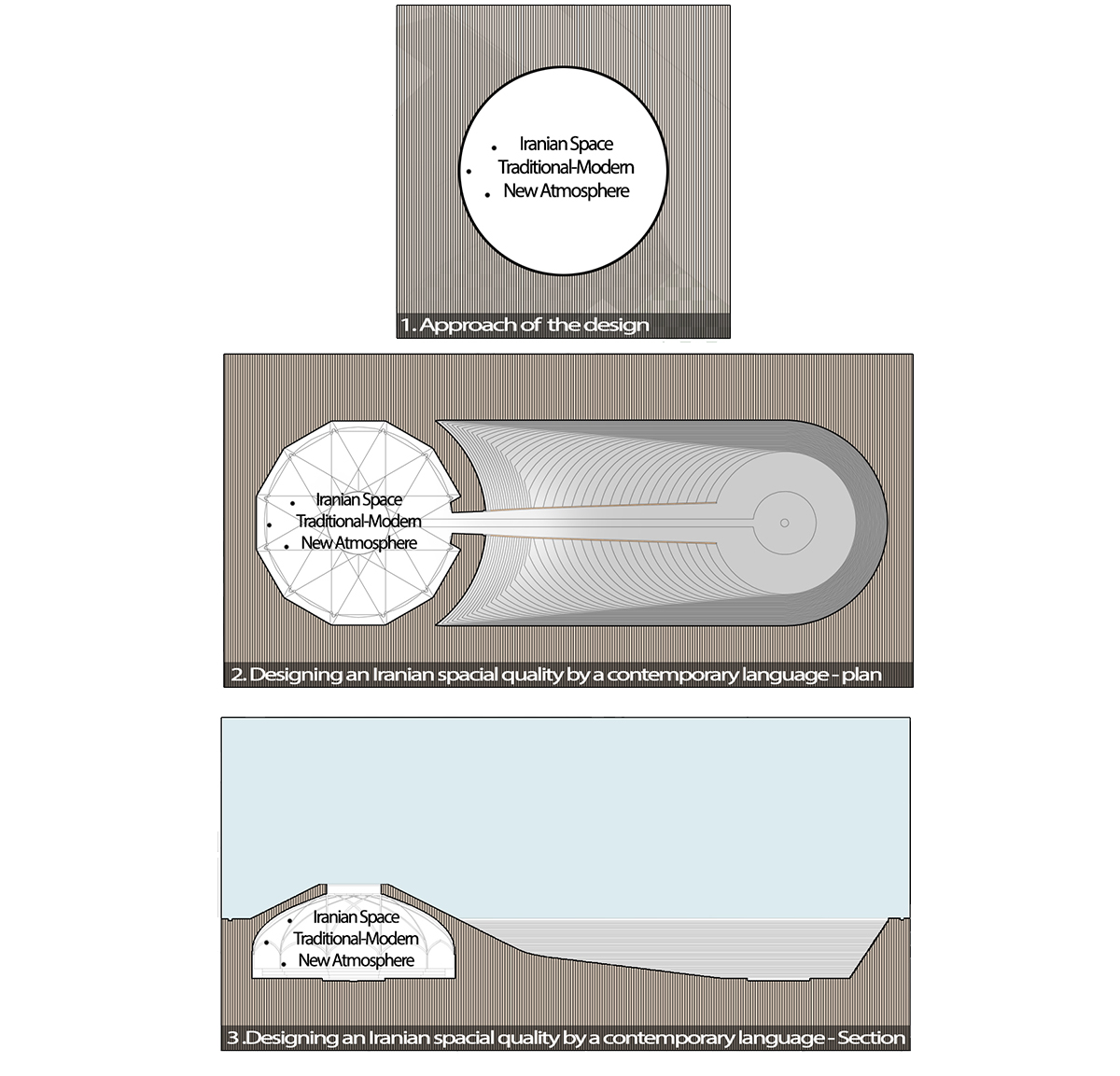 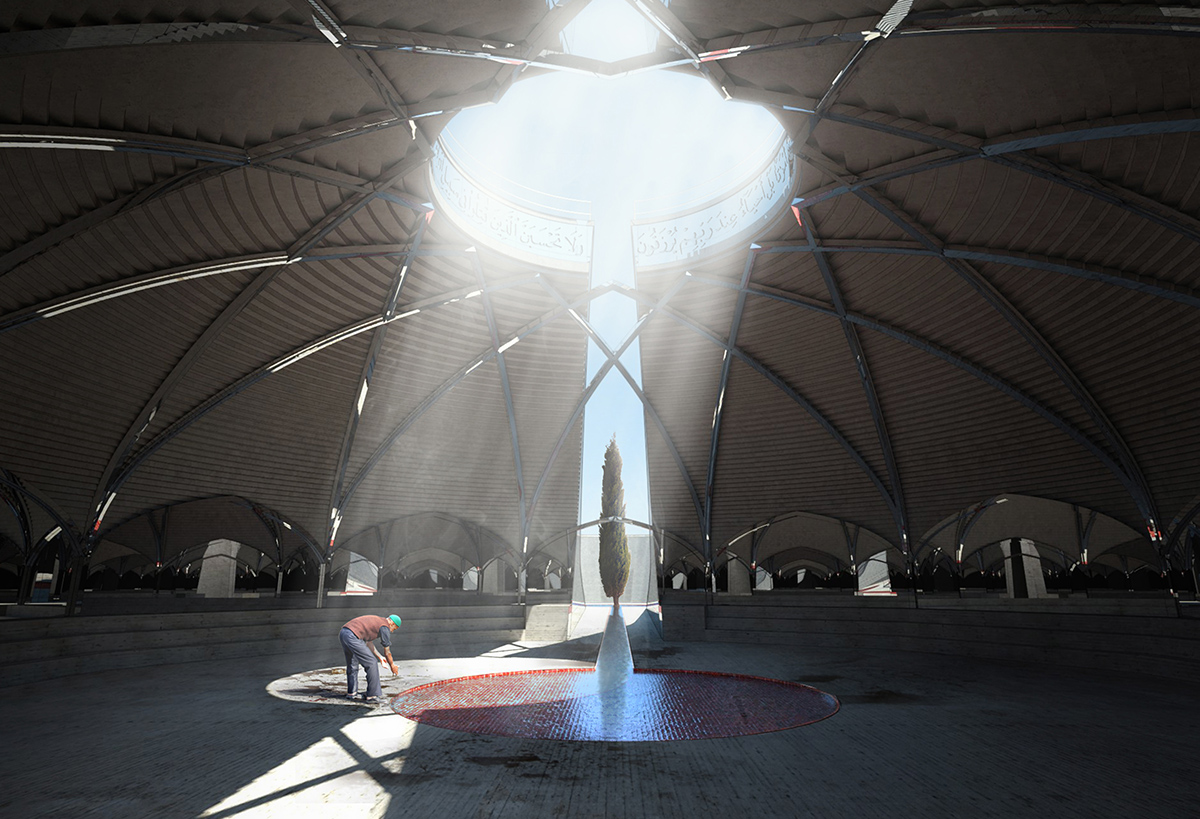 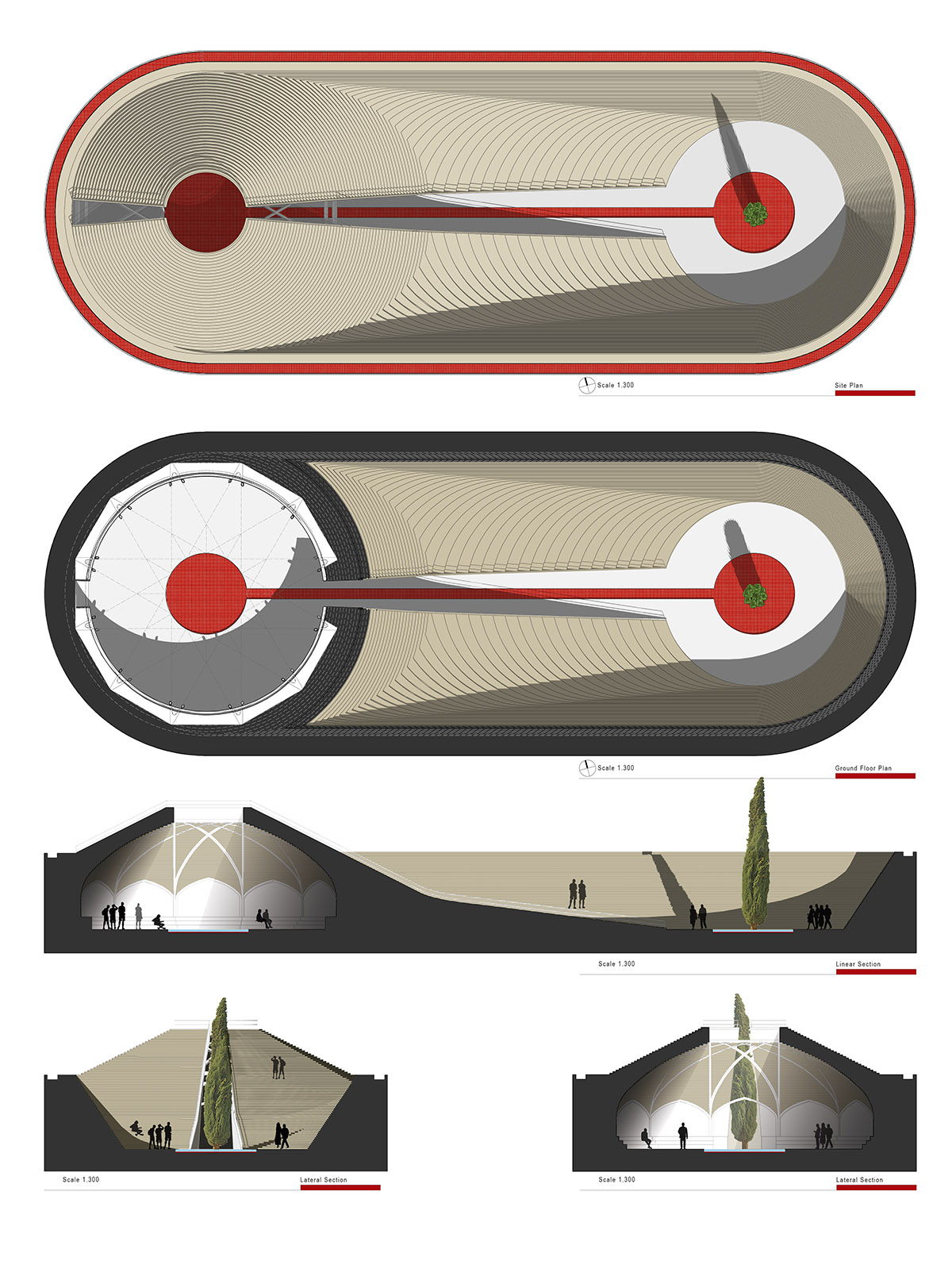