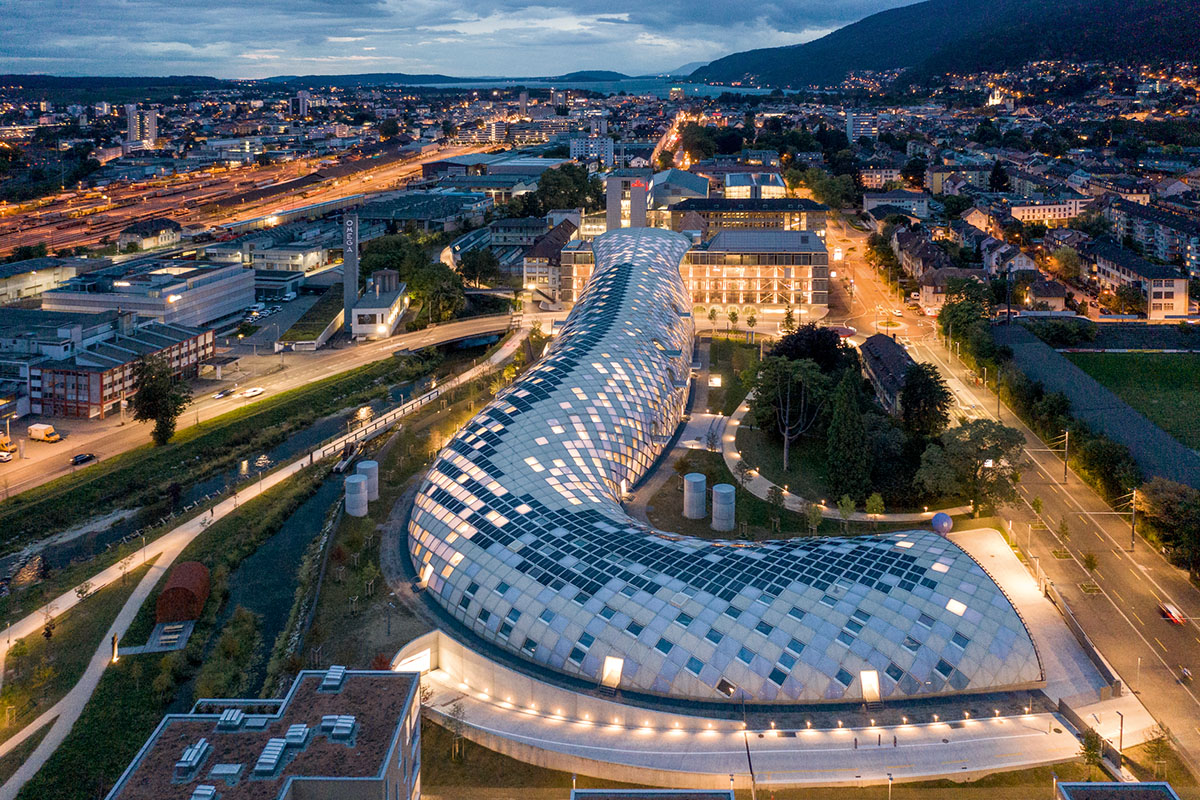 Pritzker Prize-winning Japanese architect Shigeru Ban has completed the new headquarters of Swatch, a renowned Swiss watchmaker in 1983 by Nicolas Hayek and a subsidiary of The Swatch Group.

The new Swatch headquarters has been completed in Biel, Switzerland - after a construction period of almost five years, the shimmering, curved silhouette of the new Swatch building is described as one of the world’s largest timber structures to date. 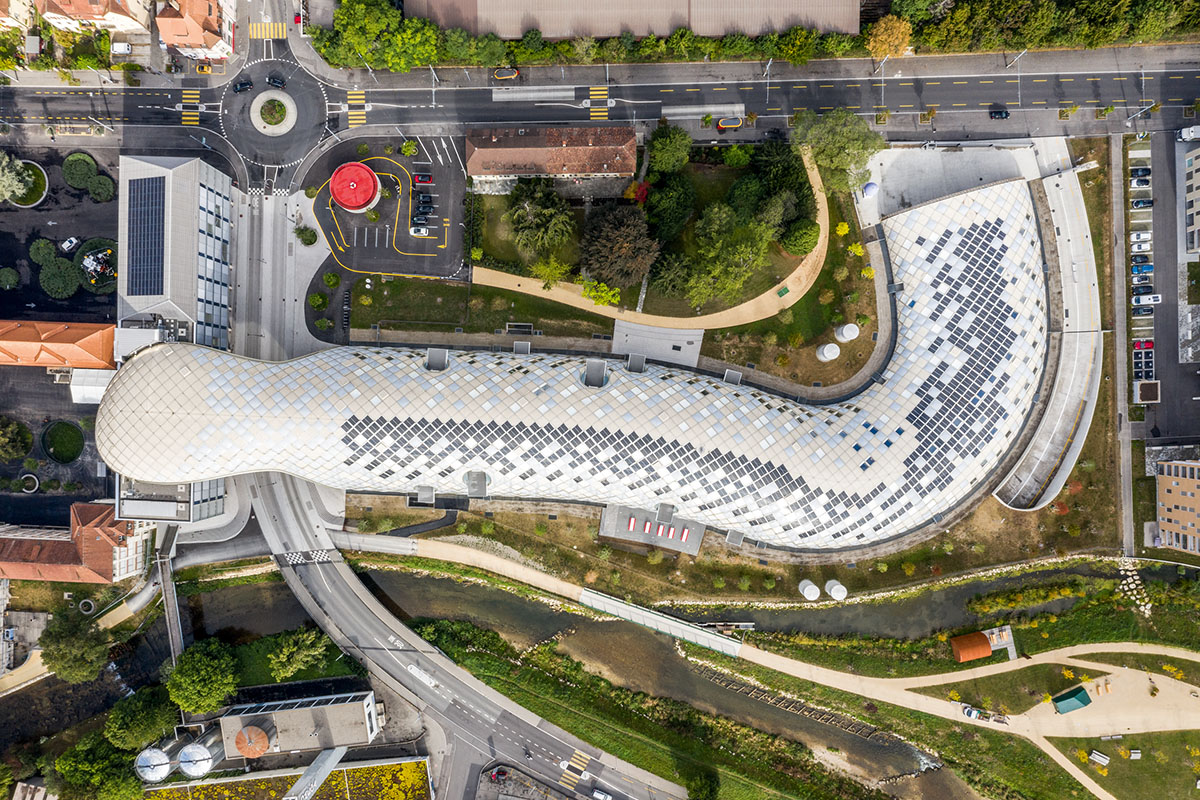 Swatch Group collaborated with the architect for the first time on the Nicolas G. Hayek Center in Tokyo that opened in 2007. In 2011, his design won the Swatch Group’s architectural competition for the construction of the new Swatch Headquarters, the new Omega Manufacture, and the Cité du Temps, particularly convincing with its original yet pragmatic concept as well as the ability to respect the brand-specific spirit for each of these buildings. 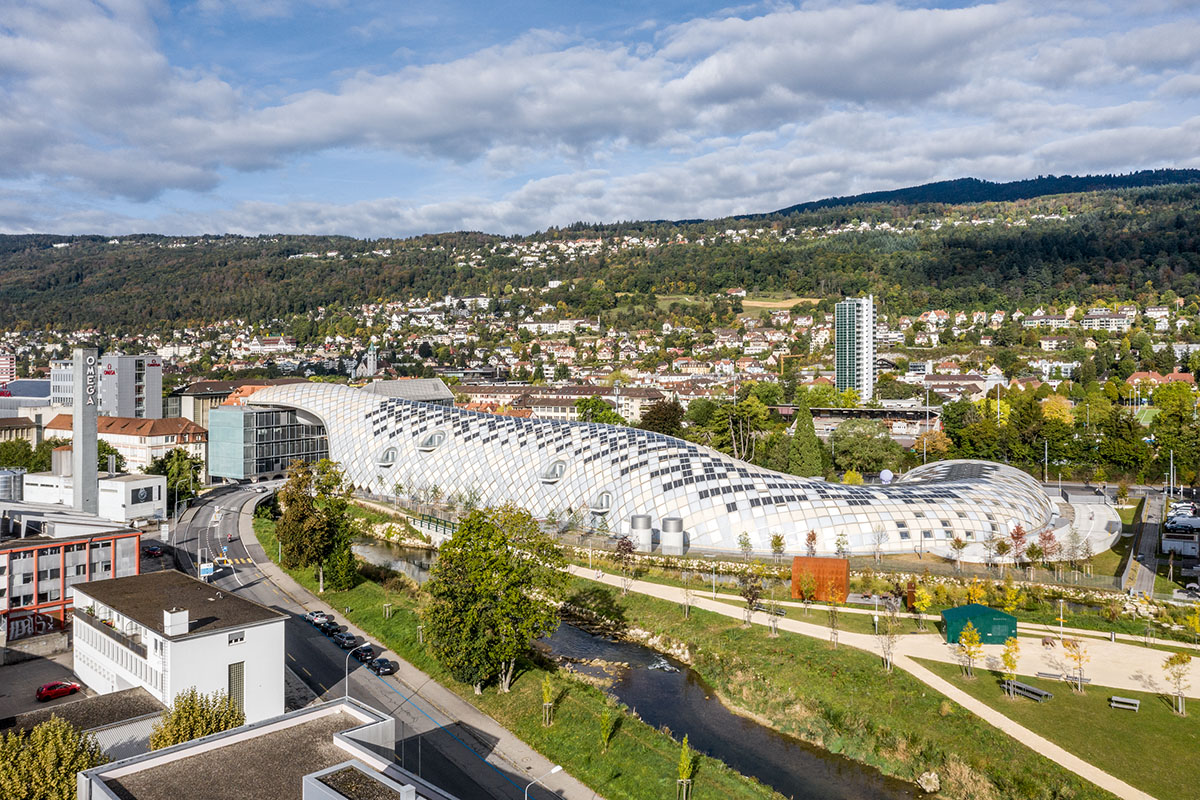 The new Swatch building extends over a total length of 240 meters and a width of 35 meters. At its highest point, the façade measures 27 meters.

The unusual design breaks with the conventions of classic office building architecture and blends harmoniously into the urban environment. The building’s forms awaken the imagination – like a work of art, the interpretation lies in the eye of the beholder. 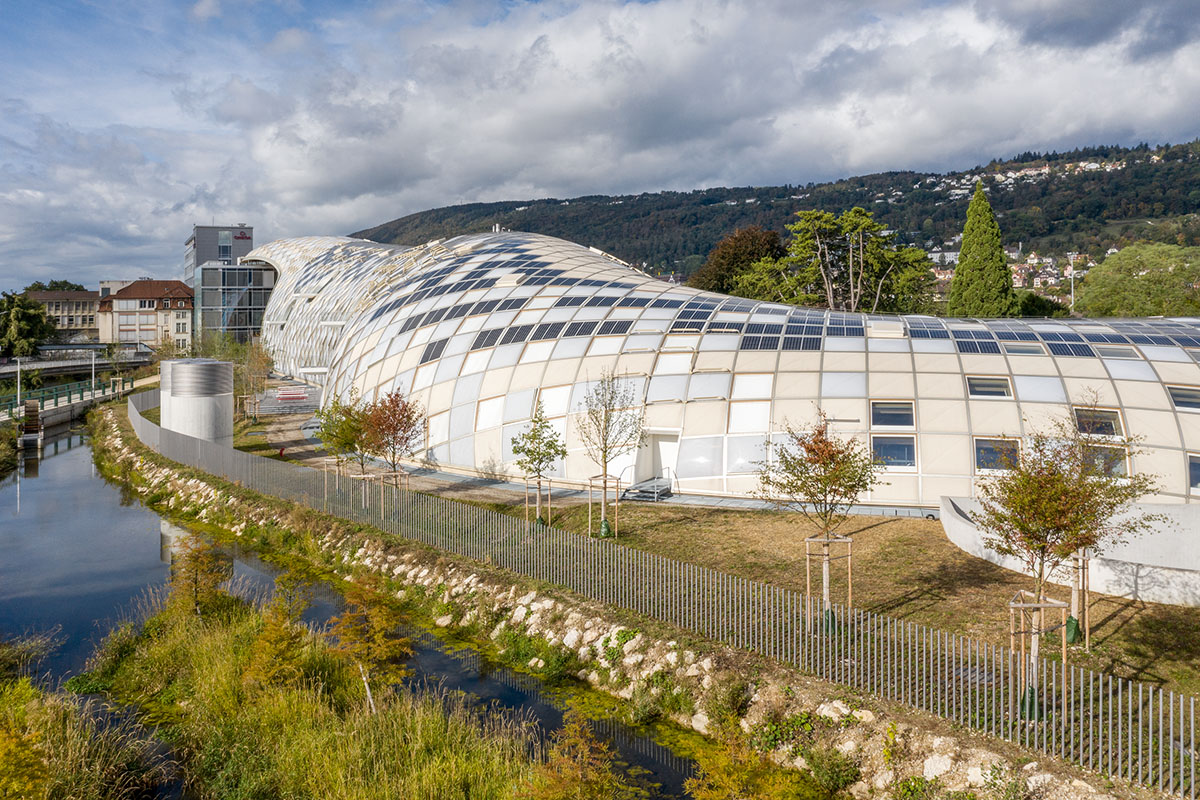 "The aim of Shigeru was to give all three buildings something in common which is related to the local context of the site. Then wood, was the optimum choice from two aspects," stated in a project description.

"From the construction point of view, it is the best structural material because of its high precision which allows extremely quick and quiet erection process, and above all, wood is the only renewable structural, material."

"From a contextual point of view,wood was also the only choice because Biel / Bienne is known for its timber engineering school which leads the timber technology of Switzerland." 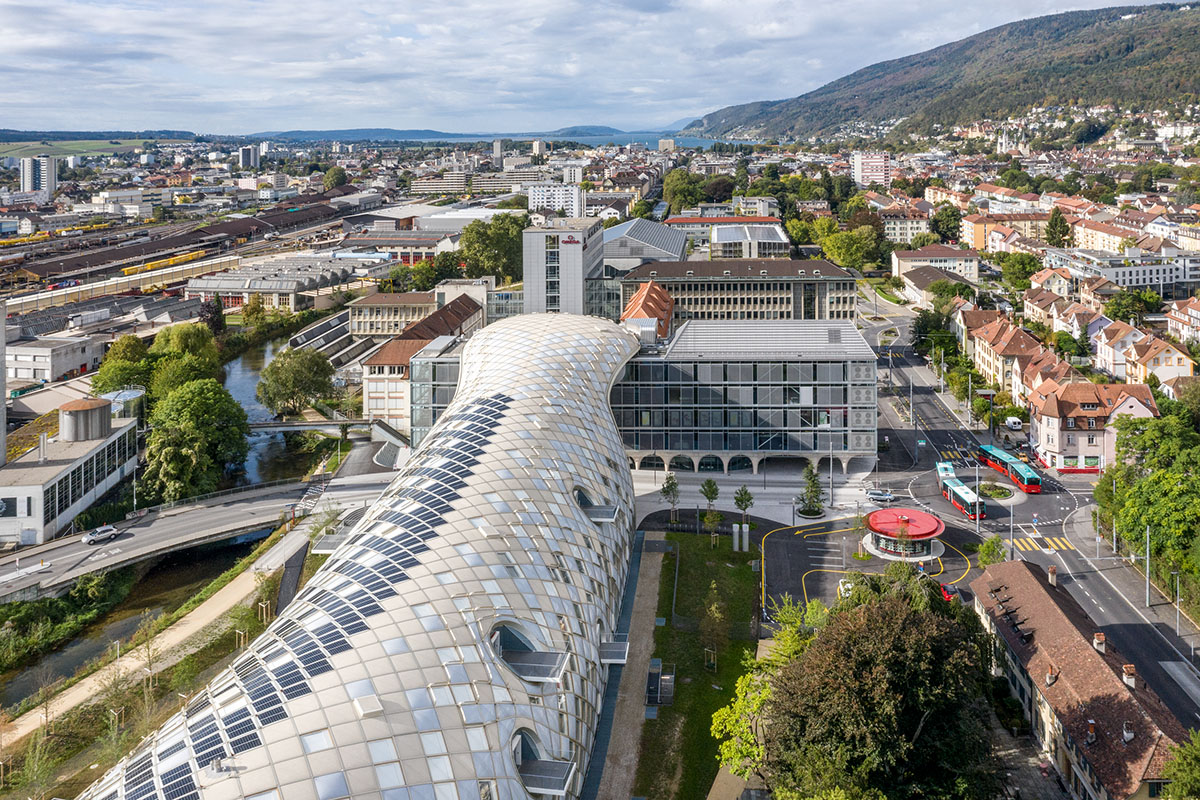 The vaulted façade with an area of over 11,000 square meters rises gently towards the entrance and transitions to the Cité du Temps. Both exterior and interior of the building are interspersed with a variety of leitmotifs, with curved shapes, colors and transparency, as well as with the unusual use of classic materials and building elements. A timber grid shell construction forms the basic structure of the large-area façade. The traditional material was chosen for its ecological and sustainable properties.

Wood can also be processed flexibly and cut to extremely precise sizes – important properties for a construction where every millimeter is important. During the planning phase, modern 3D technology helped to define the exact shape and positioning of the approximately 4,600 beams of the timber grid shell. 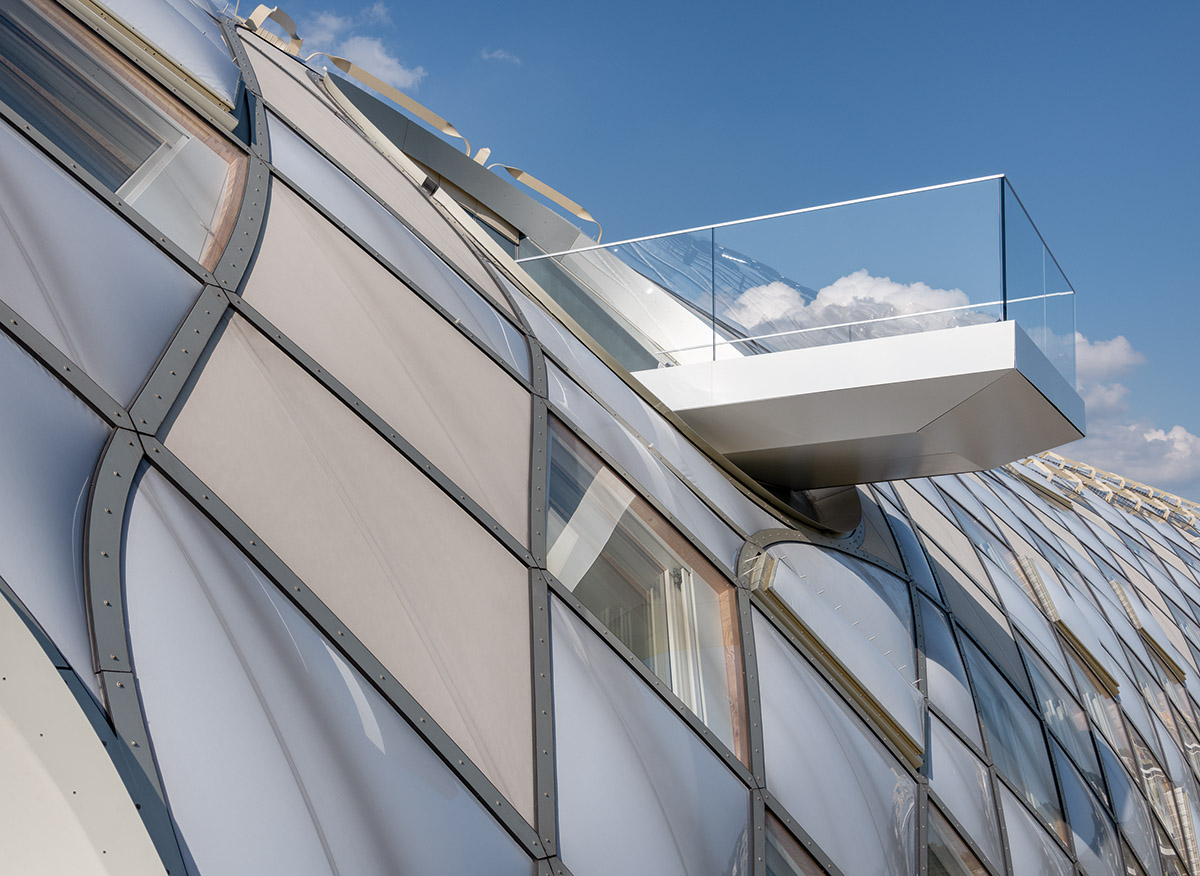 Using a sophisticated plug-in principle, the individual beams were fitted to each other perfectly. Since the timber grid shell of the Swatch building serves as a large office façade, it also had to meet various technical requirements. A complex network of cables is discreetly integrated into its structure. 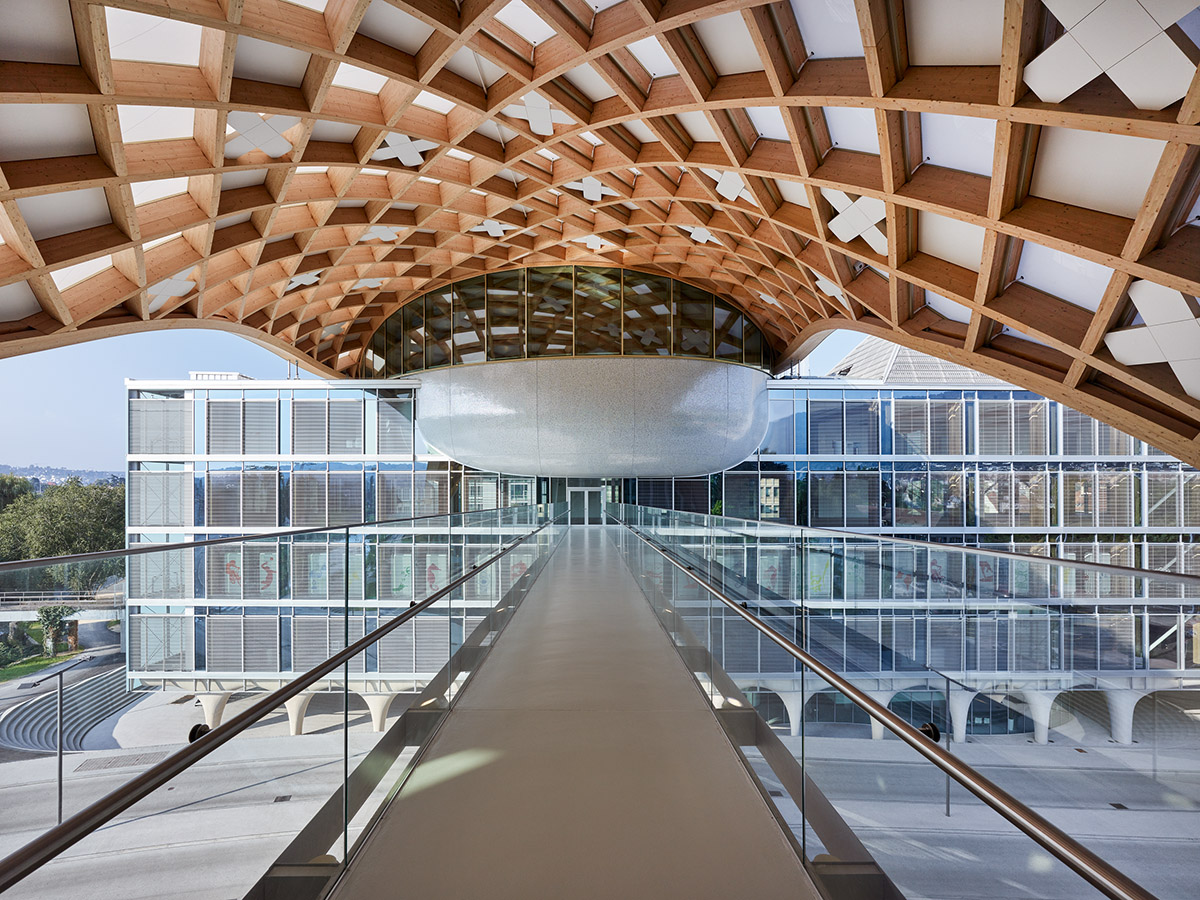 While the wooden structure was still being erected, the installation of around 2,800 honeycomb timber grid shell elements, which make up most of the façade, began. Each element was meticulously tailored from up to 50 individual parts and adapted to its individual function and position. Three basic types of honeycomb can be distinguished: the opaque, the translucent and the transparent element. 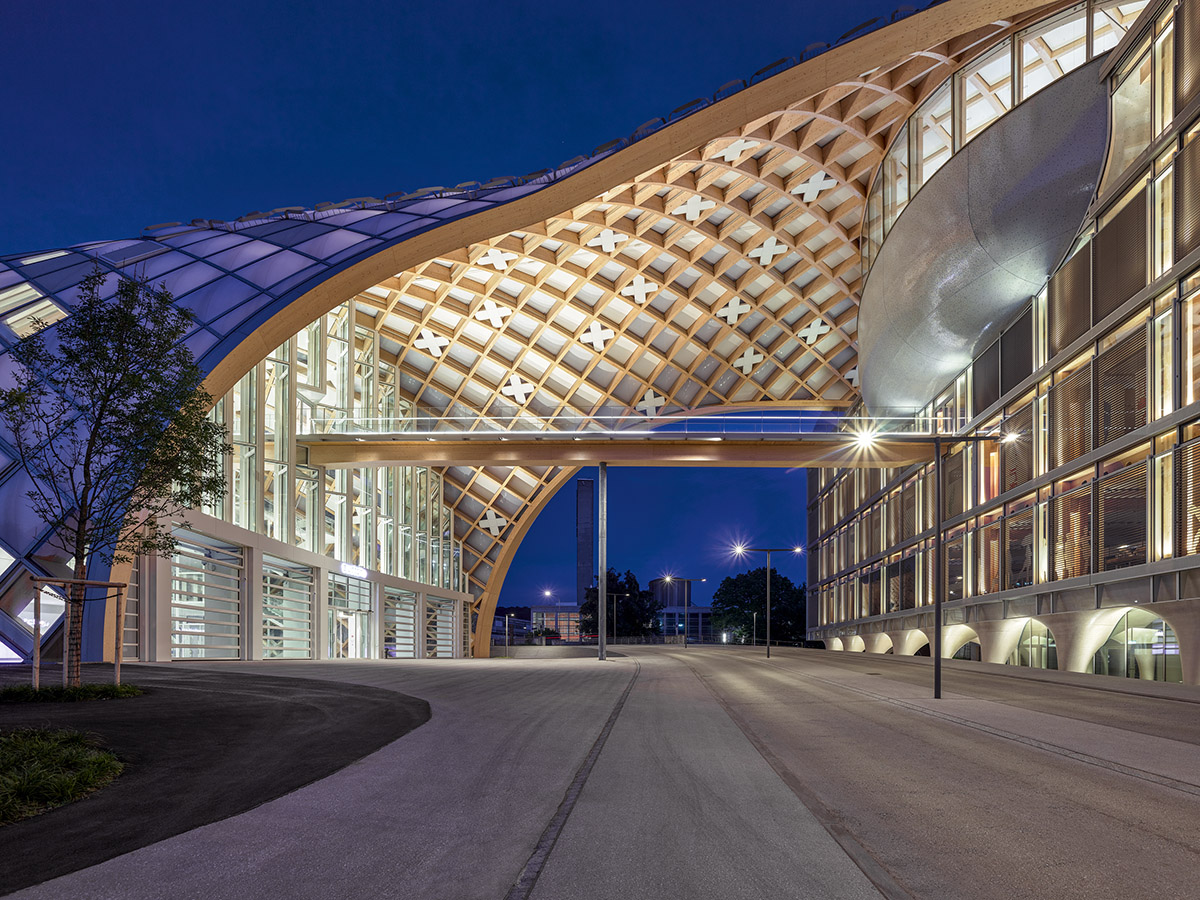 The regular opaque element represents the majority of the combs. It is a closed element with an extremely weather-resistant and opaque outer film, which serves primarily as sun protection.

Some of these elements can be opened for smoke extraction, while others are equipped with photovoltaic cells. The translucent cushion element, on the other hand, is inflated with air and fitted with translucent polycarbonate sheets in the middle for thermal insulation. 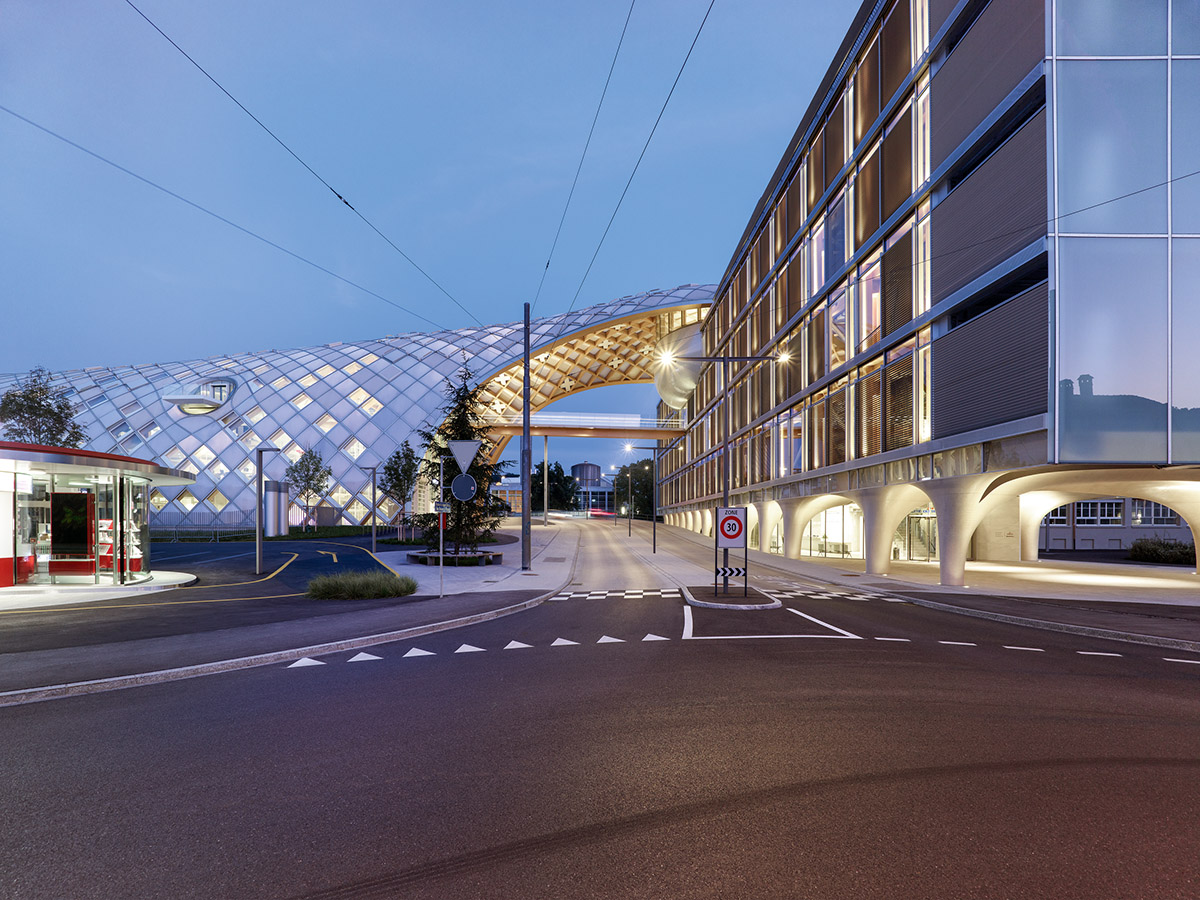 The cushions, which are also able to withstand the weight of snow or ice, are constantly lightly ventilated so that they are permanently under tension. The transparent element is made of glass.

A total of four glass panes were used for thermal insulation, between which a white roller blind is embedded. These elements are as well always lightly ventilated to prevent condensation from forming. 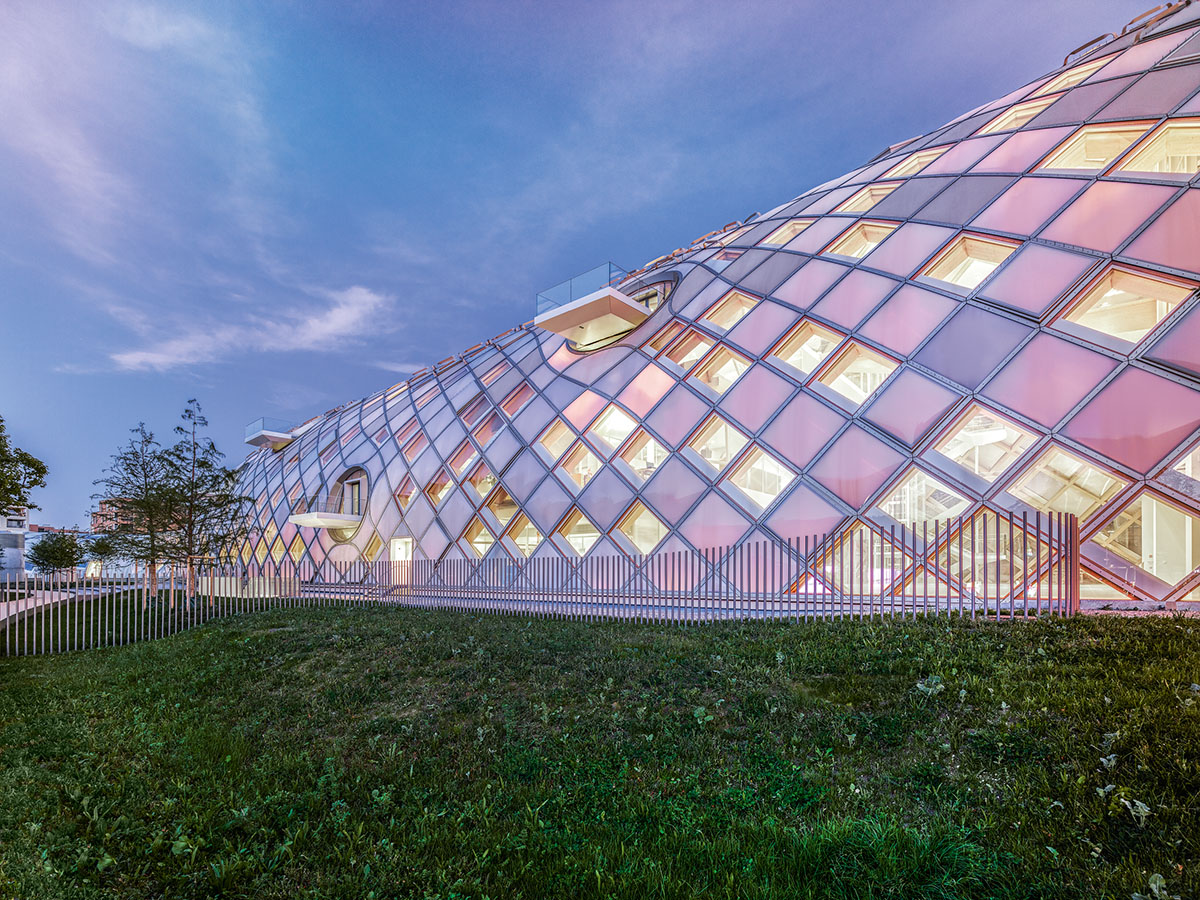 Inside the building, 25,000-square-metre of floor space is spread over five floors for all departments of Swatch International and Swatch Switzerland. The surface area of the four upper floors decreases successively from floor to floor, while galleries with glass balustrades provide a view of the lower floors.

In addition to the regular workplaces, various common areas are distributed throughout the building: a cafeteria on the ground floor, which is open to all Swatch employees and their visitors; small rest areas at various locations in the building. 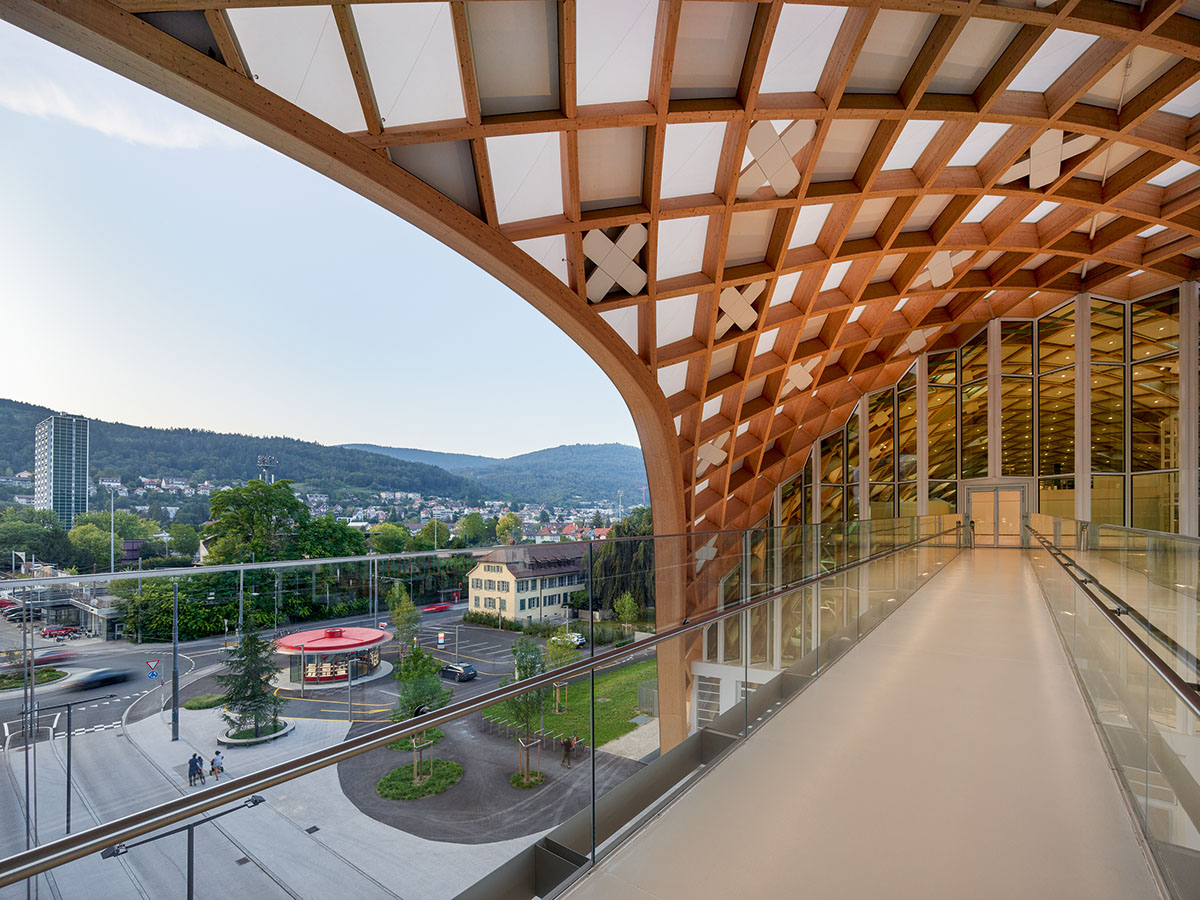 For moments when privacy is necessary, separate “Alcove Cabins” accommodate up to six employees for telephone calls or work requiring particular concentration. An especially unusual installation is located at the very rear of the second floor: a staircase that leads to nowhere – the so-called “Reading Stairs” – whose steps and views encourage brainstorming among colleagues during creative breaks.

Five black olive trees extend up to two stories in height. The evergreen Bucida buceras feels very comfortable at room temperature and keeps its fine leaves all year round. 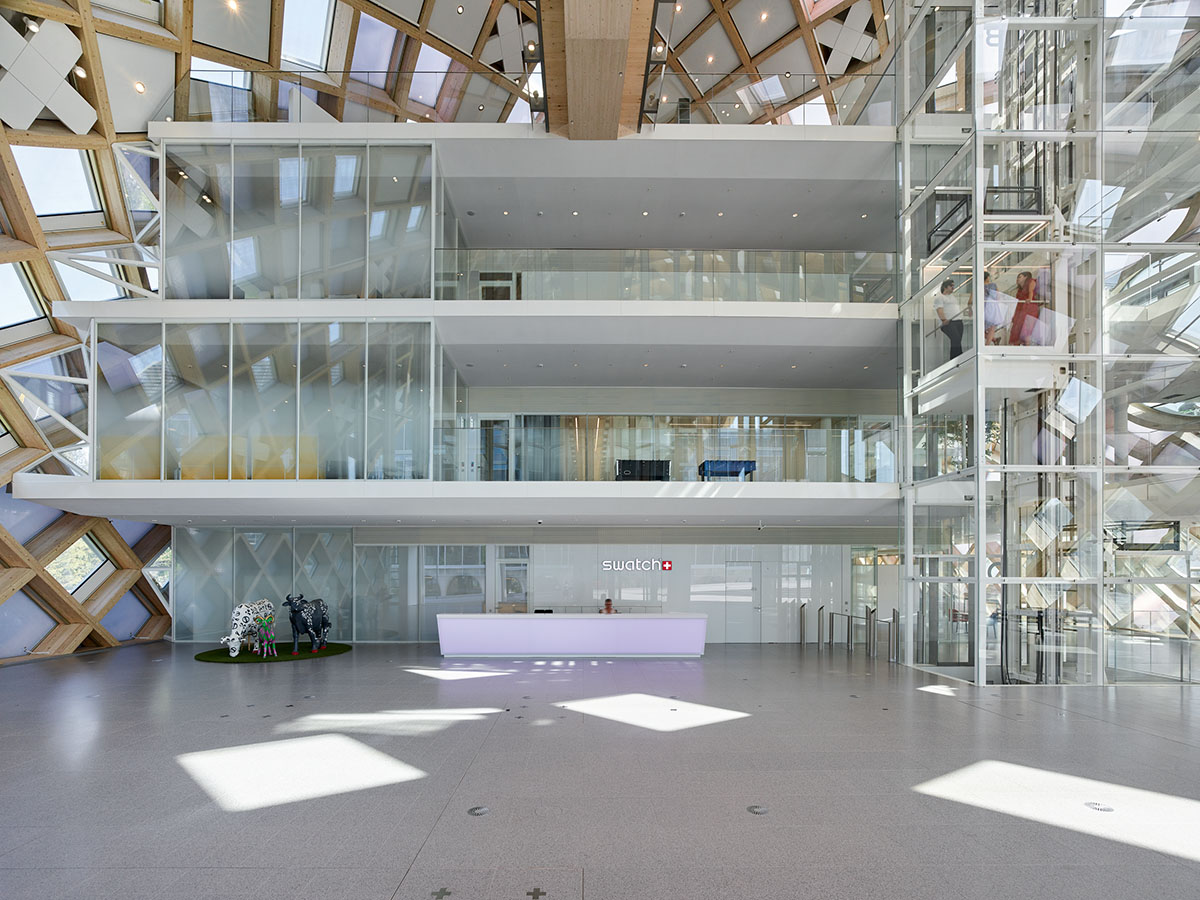 The energy concept is based on solar technology and groundwater use and allows building functions such as ventilation, cooling, heating and basic lighting to operate autonomously for both the Swatch Headquarters and the Cité du Temps. The groundwater utilization concept ensures the heating and cooling of the new Swatch building. 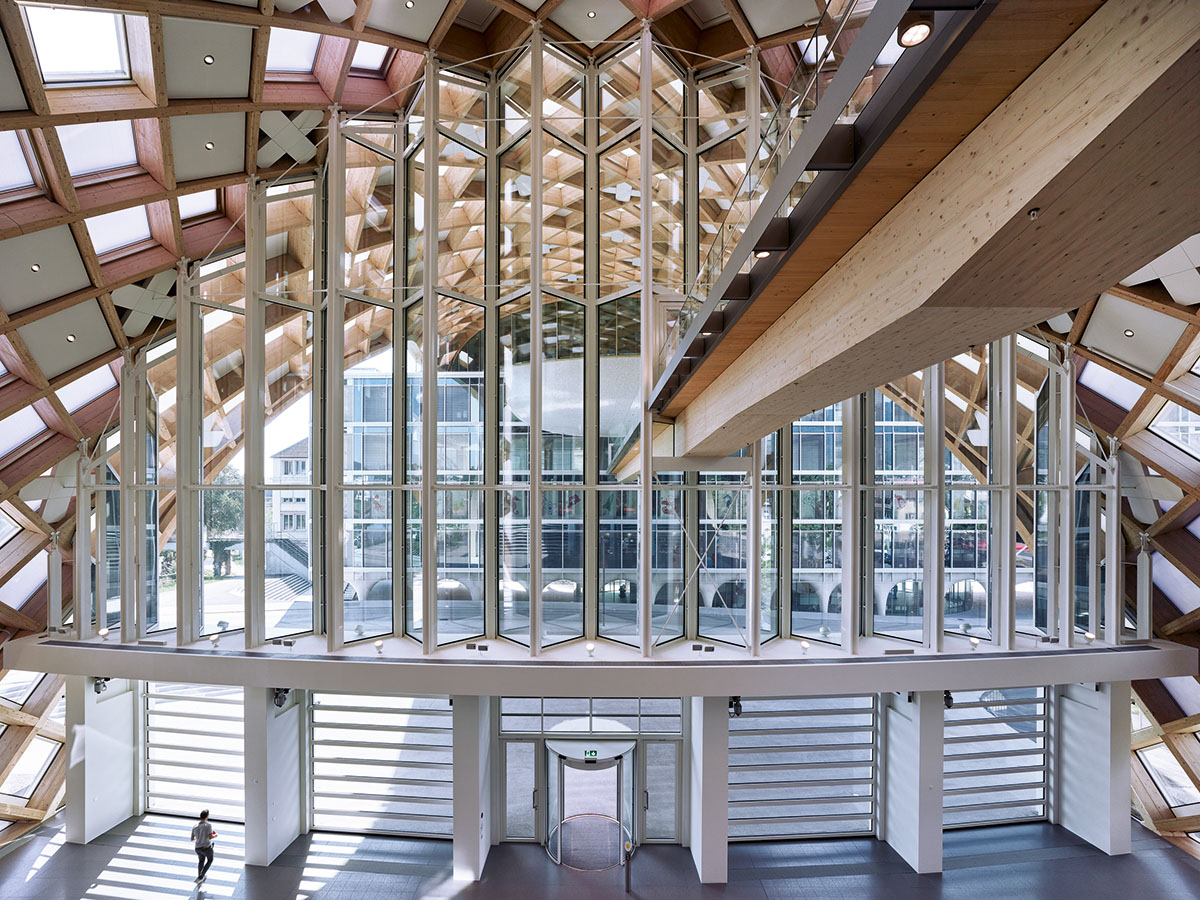 A clever use of groundwater to heat and cool the building and solar power from the photovoltaic system make a significant contribution to an optimum CO2 balance. From Velospot bicycle sharing and charging stations to intelligent blackouts and glazing, from LED lighting and highly efficient ventilation systems to thermal component activation and paperless offices: thanks to state-of-the-art technology and know-how, the new Swatch building demonstrates that modern construction and modern ways of working can be in harmony with nature. Only timber from Swiss forests – mainly spruce – was used in the construction. A total of just under 1,997 cubic meters of this was needed, a quantity that regrows in the Swiss forest in less than two hours. 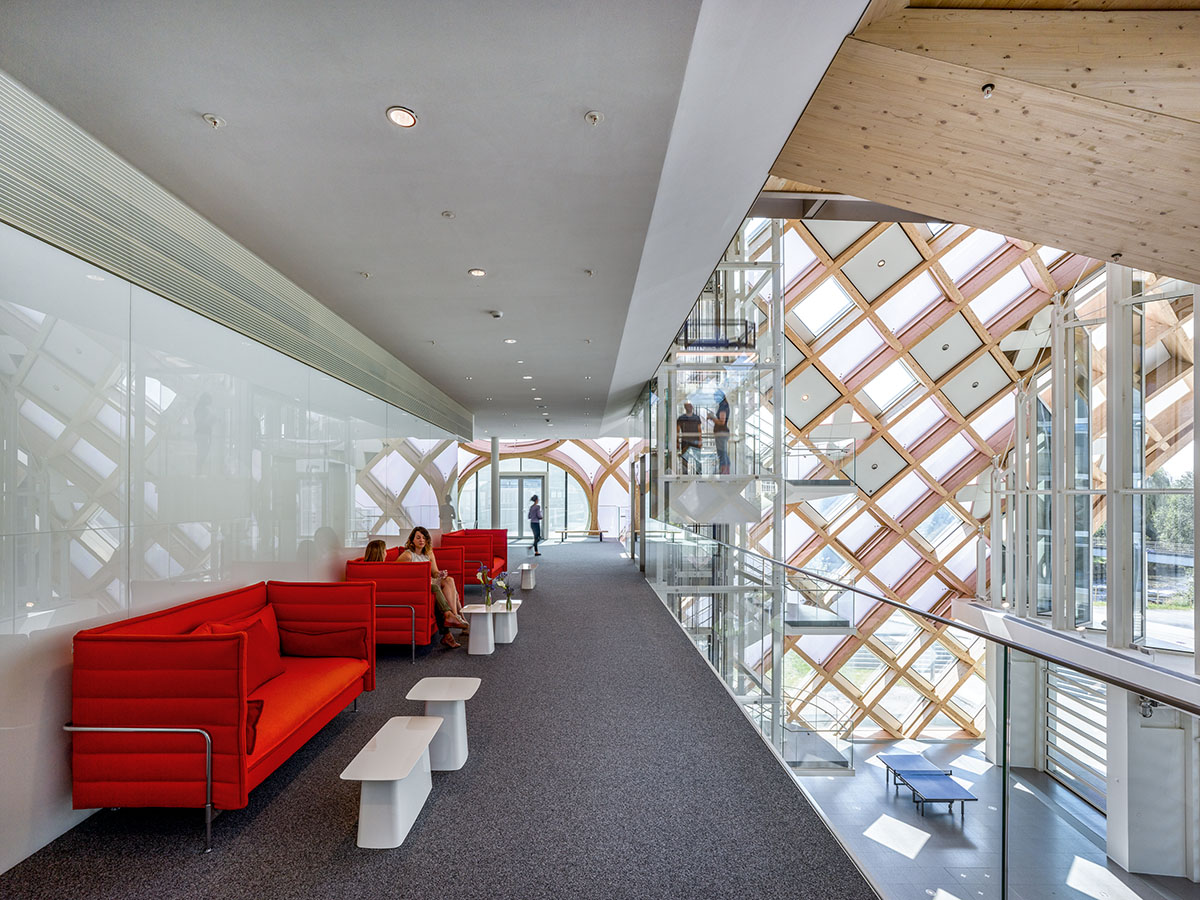 Also designed by Shigeru Ban, the Cité du Temps, measuring 80 x 17 x 28 meters, forms an independent architectural unit that perfectly complements the Swatch building. Each of its 14 arcades has a span of 15 meters and is 5 meters wide. The Cité du Temps hosts both the Omega Museum, located on the 1st floor, as well as PLANET SWATCH on the 2nd floor. The Nicolas G. Hayek Conference Hall on the 4th floor, which is reserved for Swatch Group, stands out with its elliptical shape. 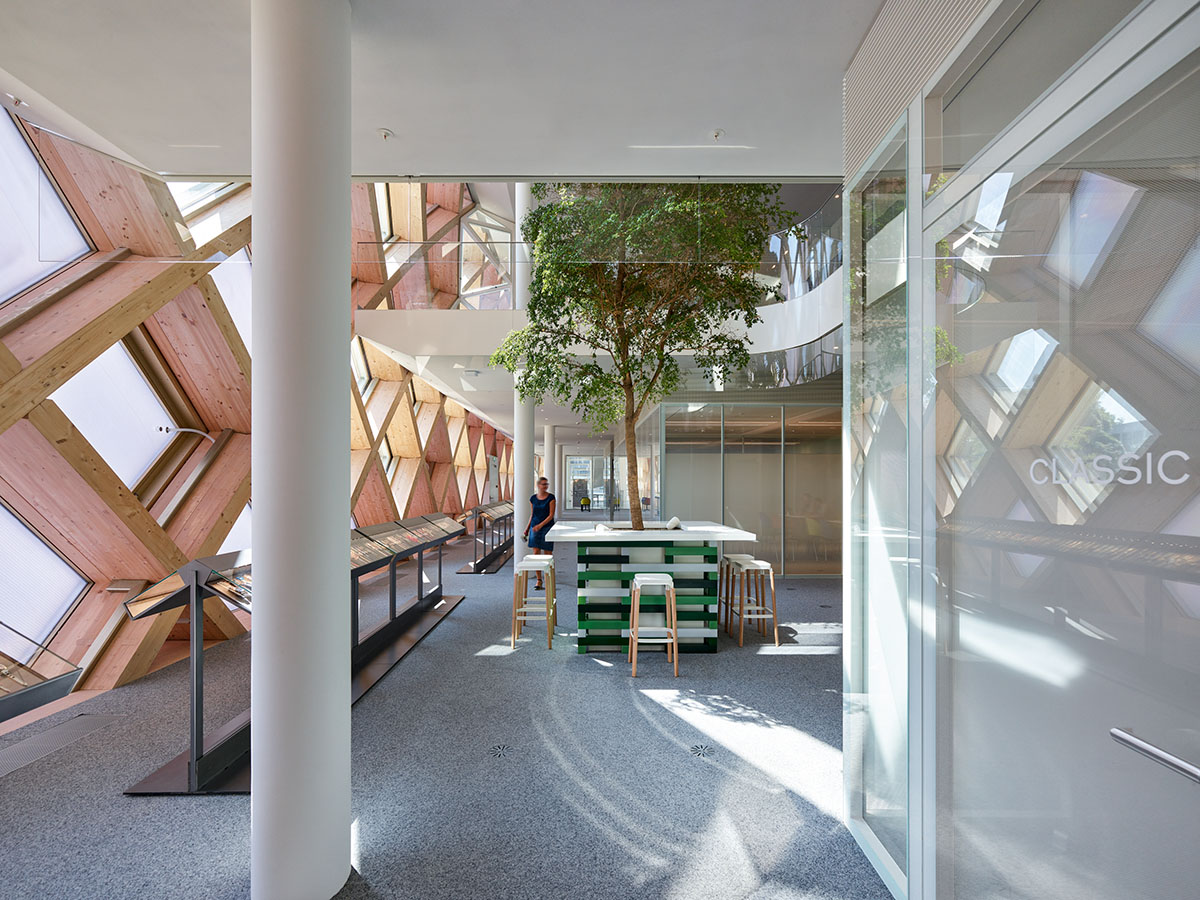 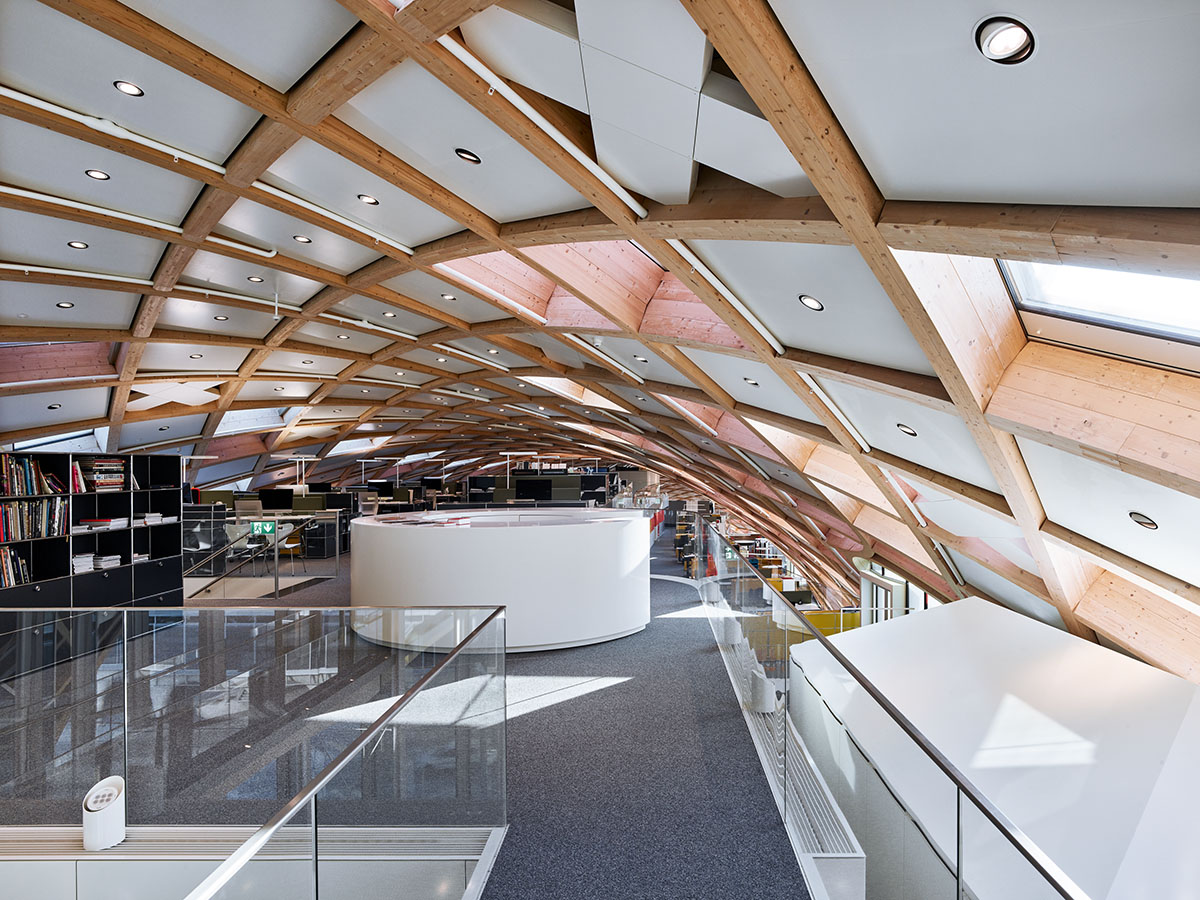 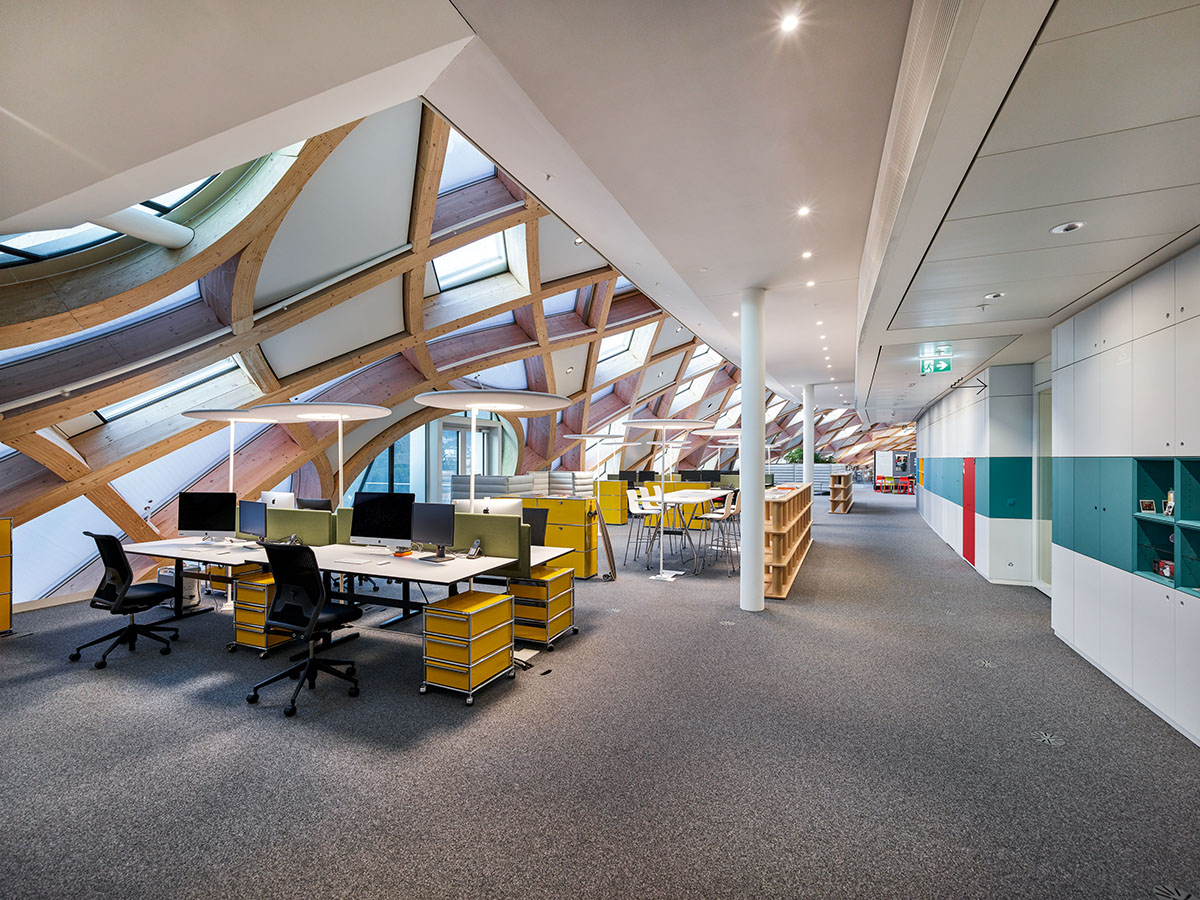 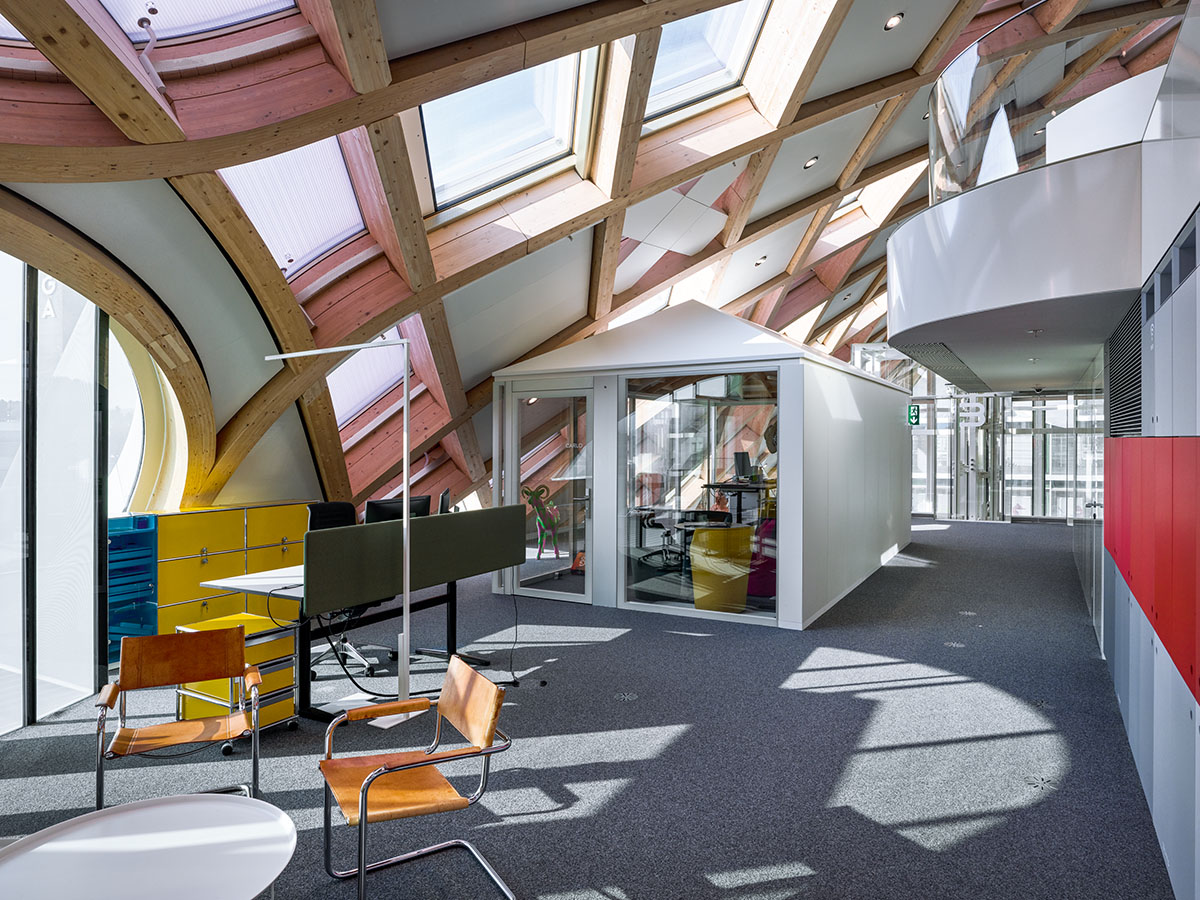 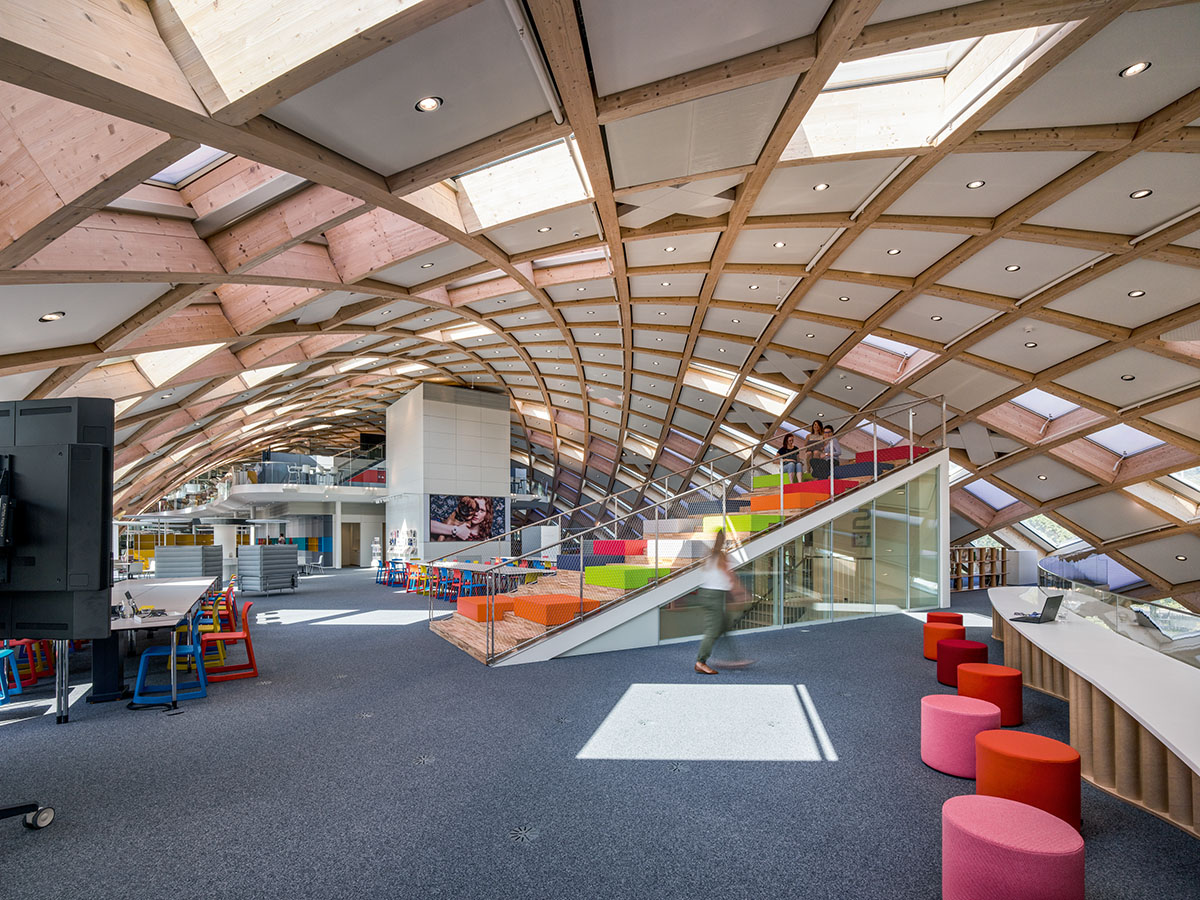 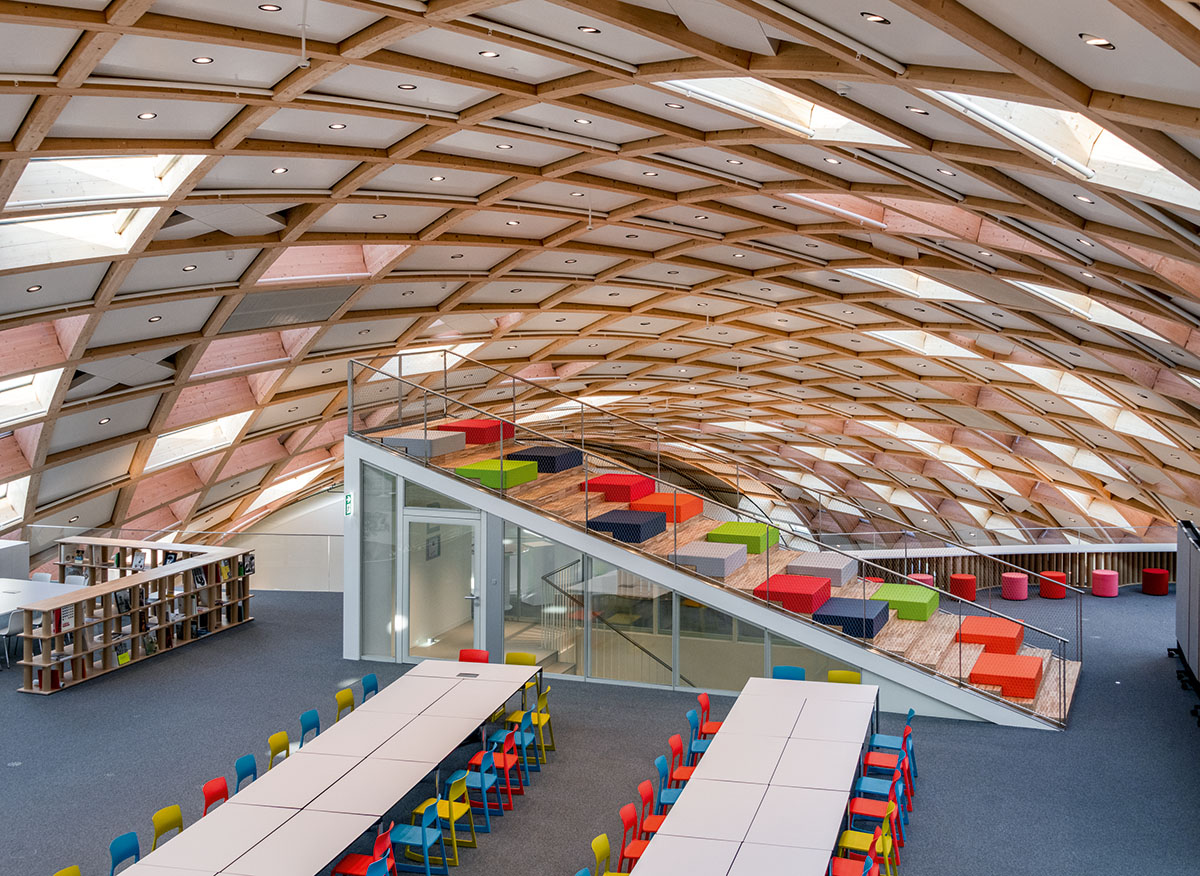 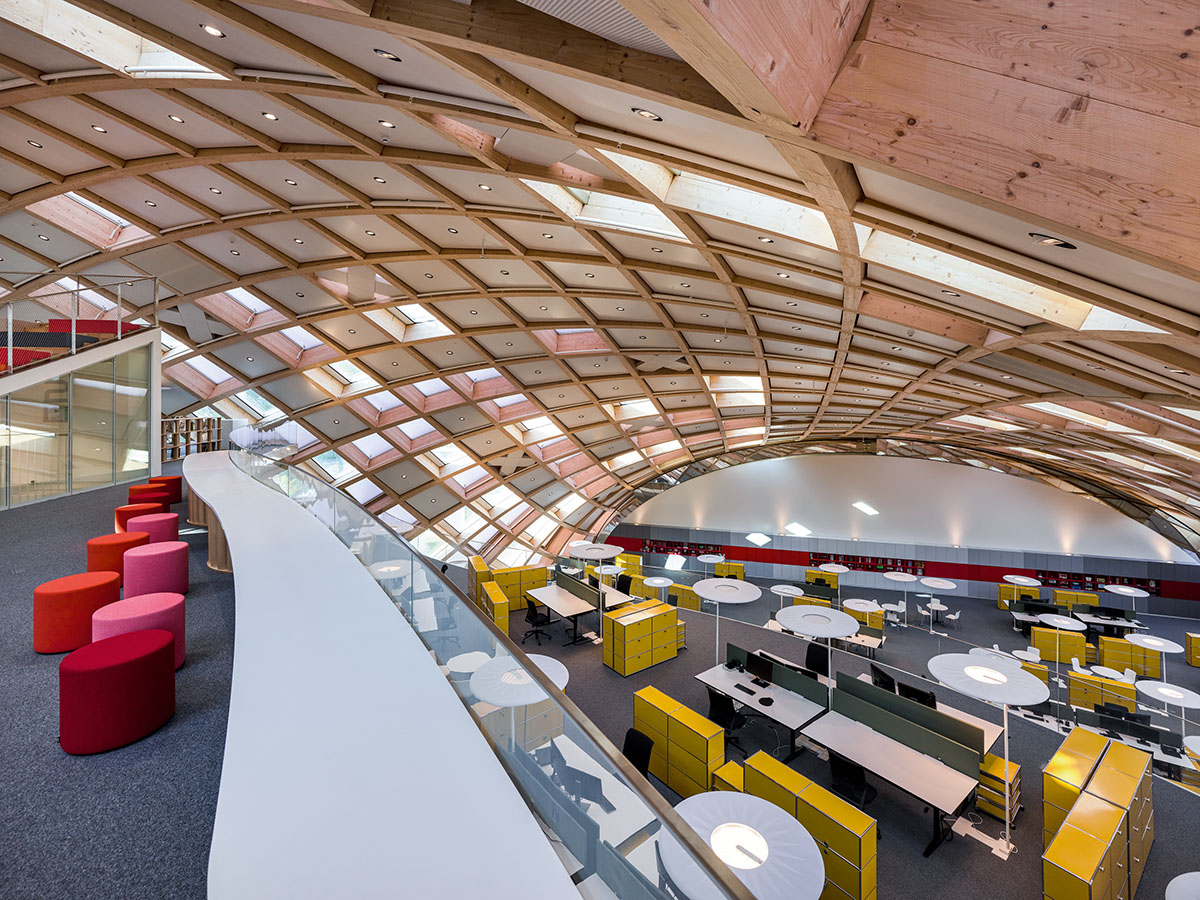 Shigeru Ban recently released design for the transformation of a disused quarry into a production campus with timber pyramids in Kentucky. Last year, Shigeru Ban built a paper partitioning system for flooding victims in Japan.

Ban is best known with his humanitarian architecture and efforts - Ban's team established around 50 evacuation shelters and 1800 units of partitions, and these activities were all made with support money gathered from all over the world.

All images courtesy of Swatch