Agent Crystalline By MARC FORNES/THEVERYMANY Speaks The Art Of Speed 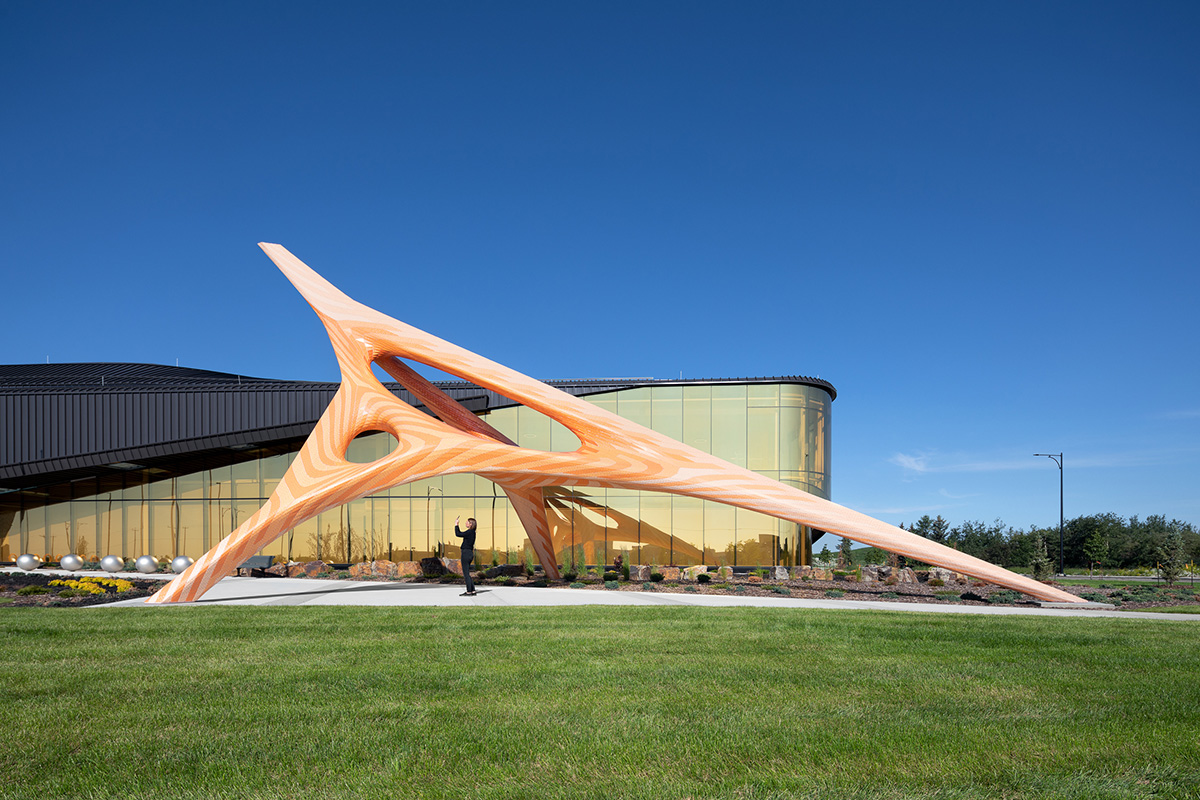 Agent Crystalline is THEVERYMANY's new installation at the Police Center of Edmonton in Canada. The installation is envisioned to evoke the readiness of a stance waiting for a starting pistol. With the orange clad skin, the three-point diagonally splayed structure graphically emphasizes senses of vigilance and acuity, in the police premises. 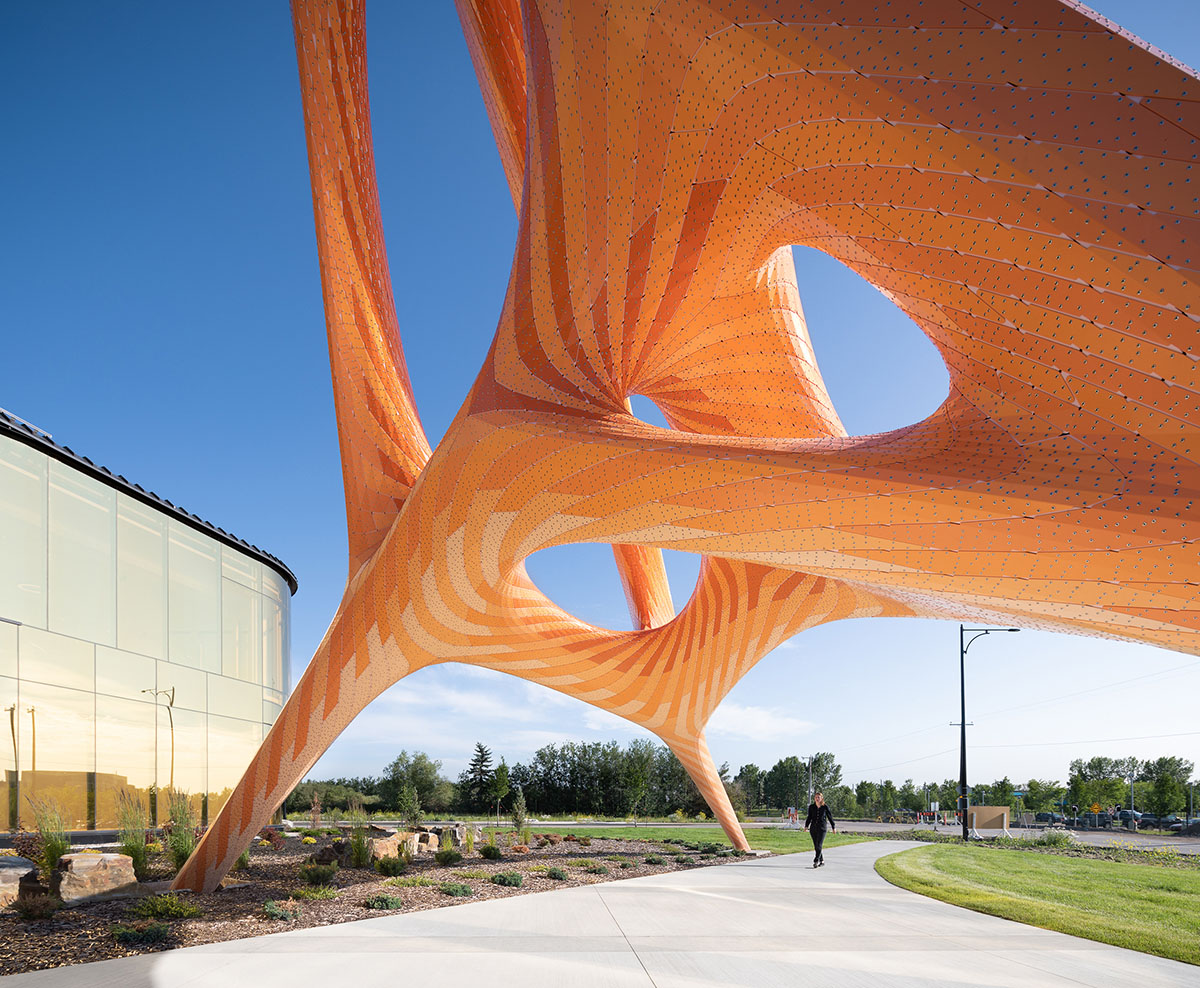 THEVERYMANY highlights the installation's discourse on "The Art of Speed" through its form's qualities of tangerine visuals, a dynamic skeleton, striking beams of orange and the language of speed traffic on its stripes. All contribute to Agent Crystalline guarding at the doors of the police, as a pinnacle at the convergence point. 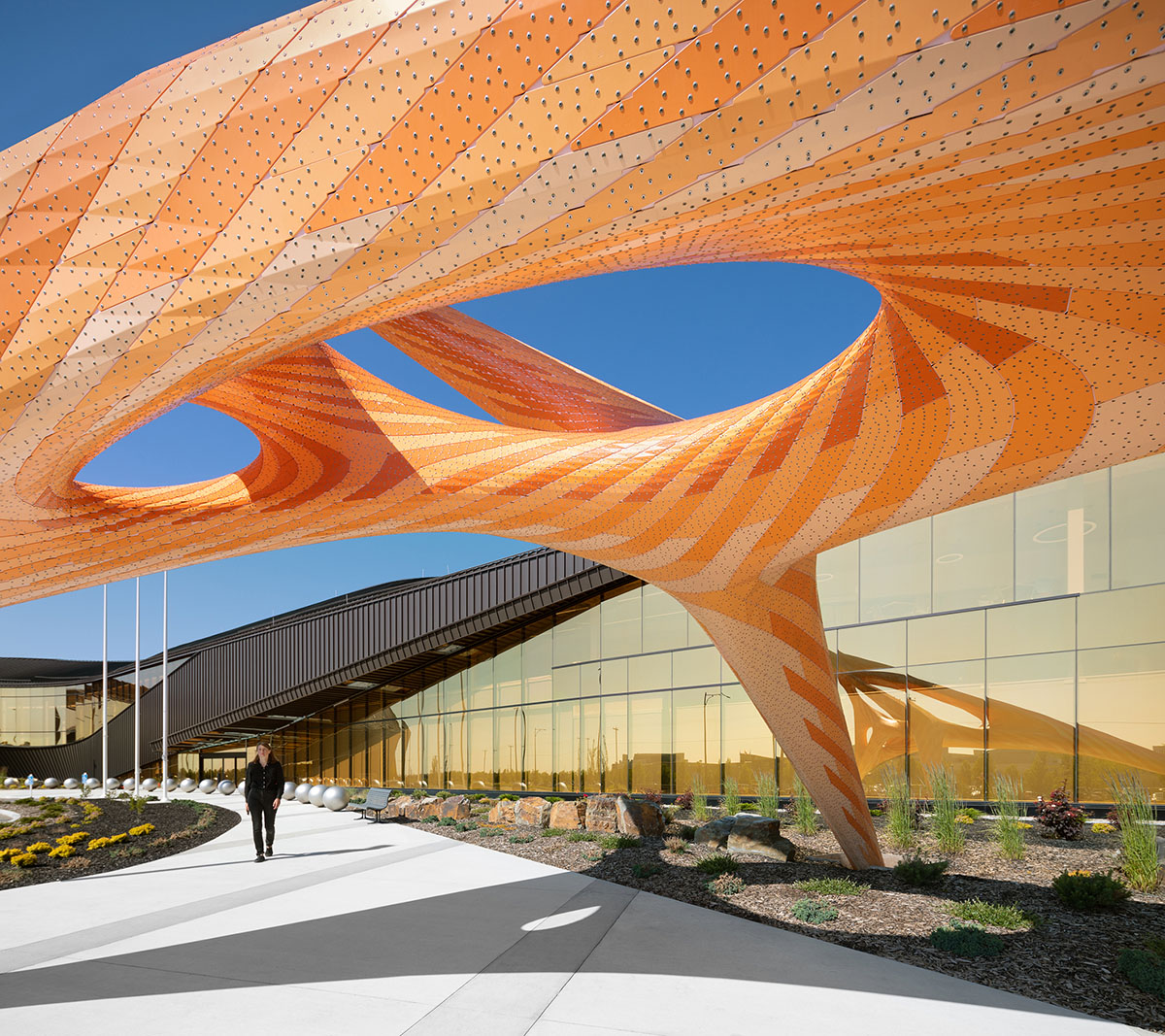 Sculpted by Marc Fornes, the installation was commissioned by the police center via the Edmonton Public Art Program. "The work speaks assertively in the language of traffic . In the lexicon of traffic, hues that demand awareness are vital. The vibrant array strikes a balance between safety orange and a sweeter tangerine. Adopting the coloring of the construction offers the structure the ethos of protection and productivity; as well as a bold timeless feeling", describes Marc Fornes. 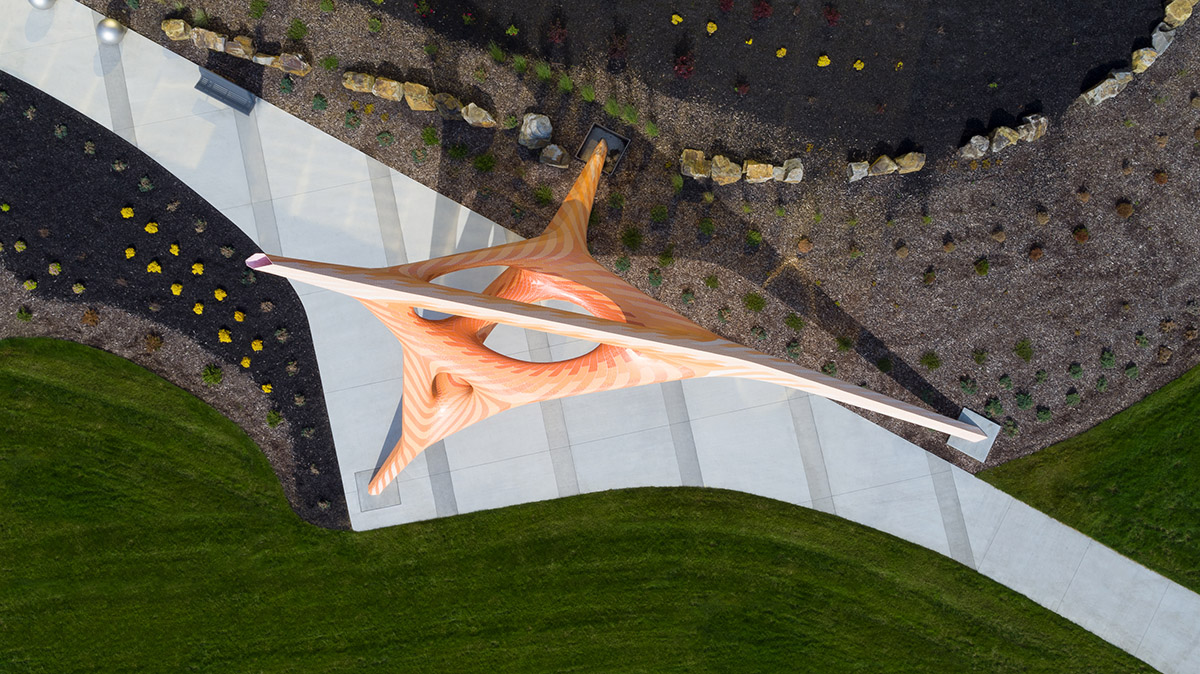 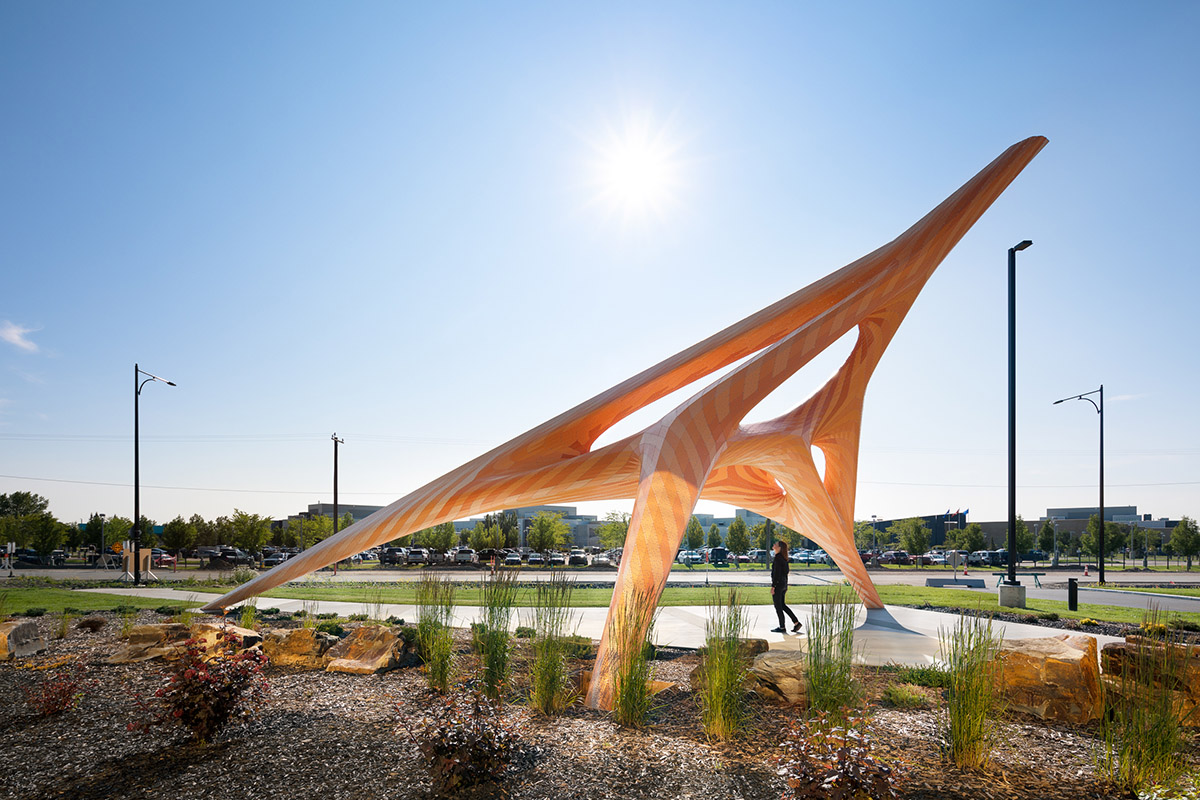 "This balanced pinnacle wears a curated skin of racing stripes inspired by the bold lines of motorcycles, speed boats, and race cars. Orange hues are applied across the aluminum stripes to emphasize the directionality of the bias patterning and produce continuity at each connection.There are six colors in the gradient plus a pale pink under layer. The eye is caught between the reading of continuity and contrast, lending intense vibrating energy to that which remains still", says Marc Fornes. 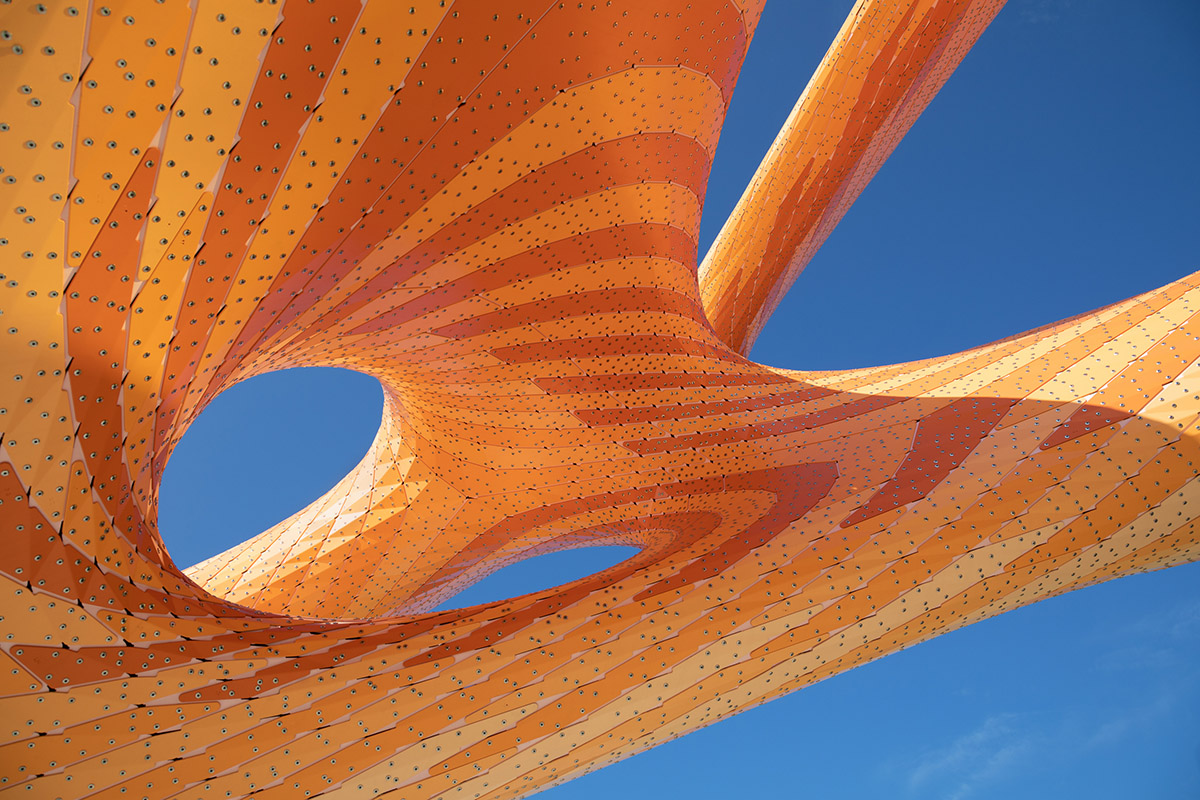 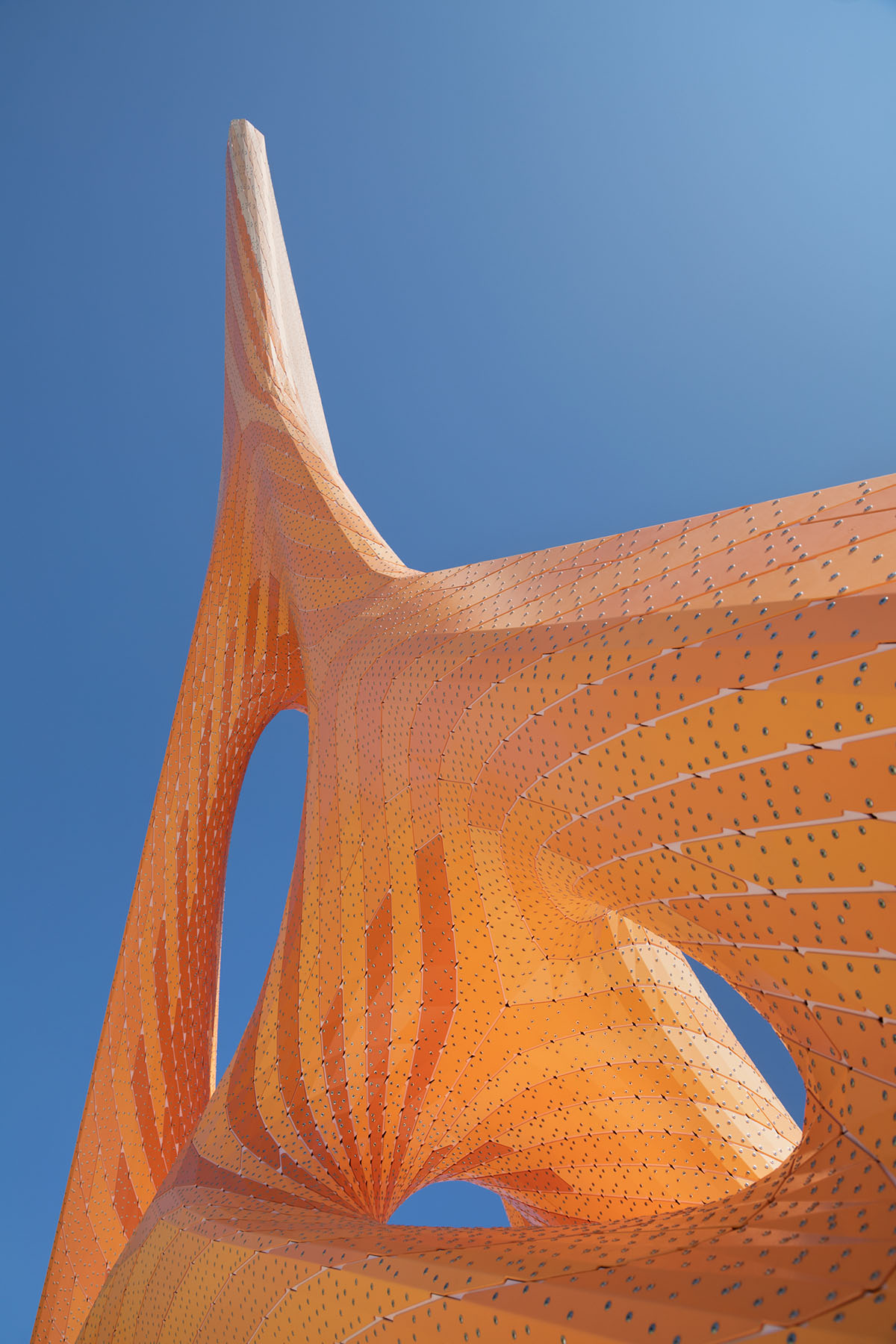 "Chesire Signal-The shades of sunset duel as they gradiate across two layers of ultra-thin aluminum skin. Consistent with the embedded language of traffic, contrasting stripes of a road sign are built into the structure of the work . The visually pulsing moments signal interaction from afar and call focus to details within", says Marc Fornes. 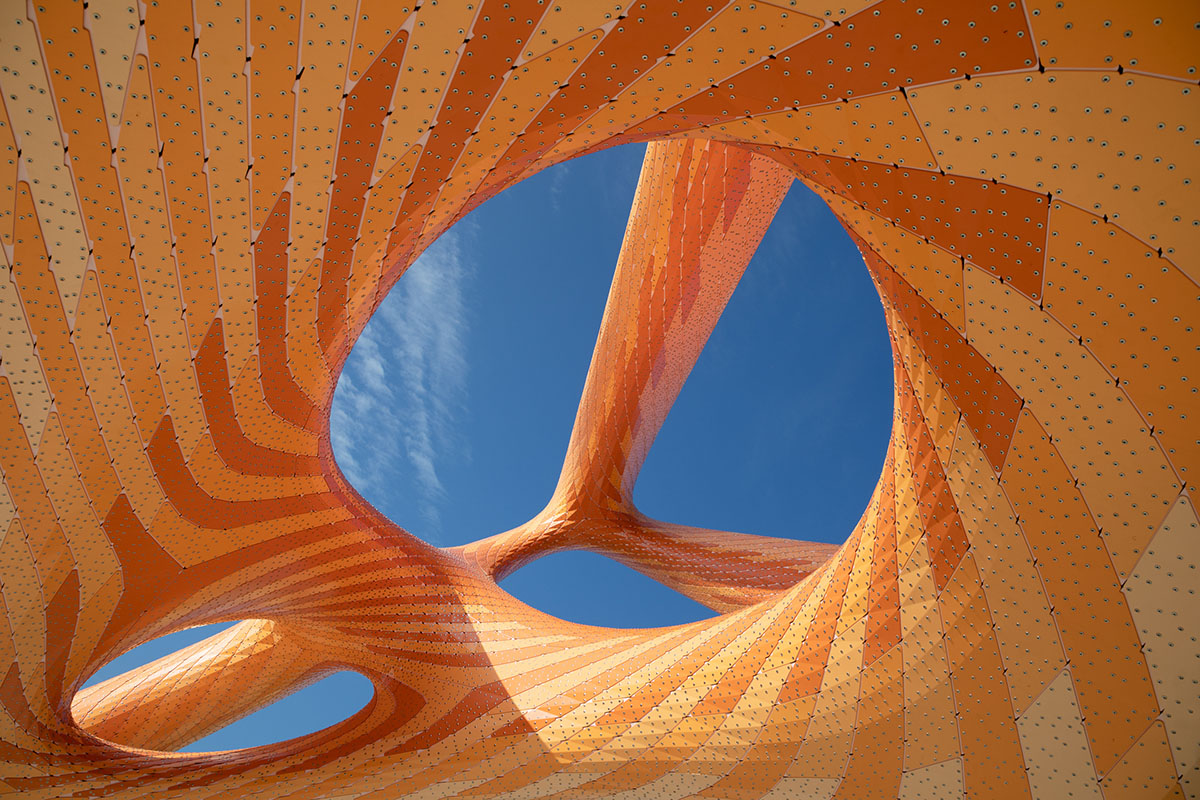 "More than ever before, the structural striping system is describing tight curvature, swirls, and twists. Contouring segments derived from parallelagent-based protocol, dive and flex at the epicenter. After defining apertures and spines, stripes wrap diagonally over the tripodal legs and descend to the ground in tight coils", says Marc Fornes. 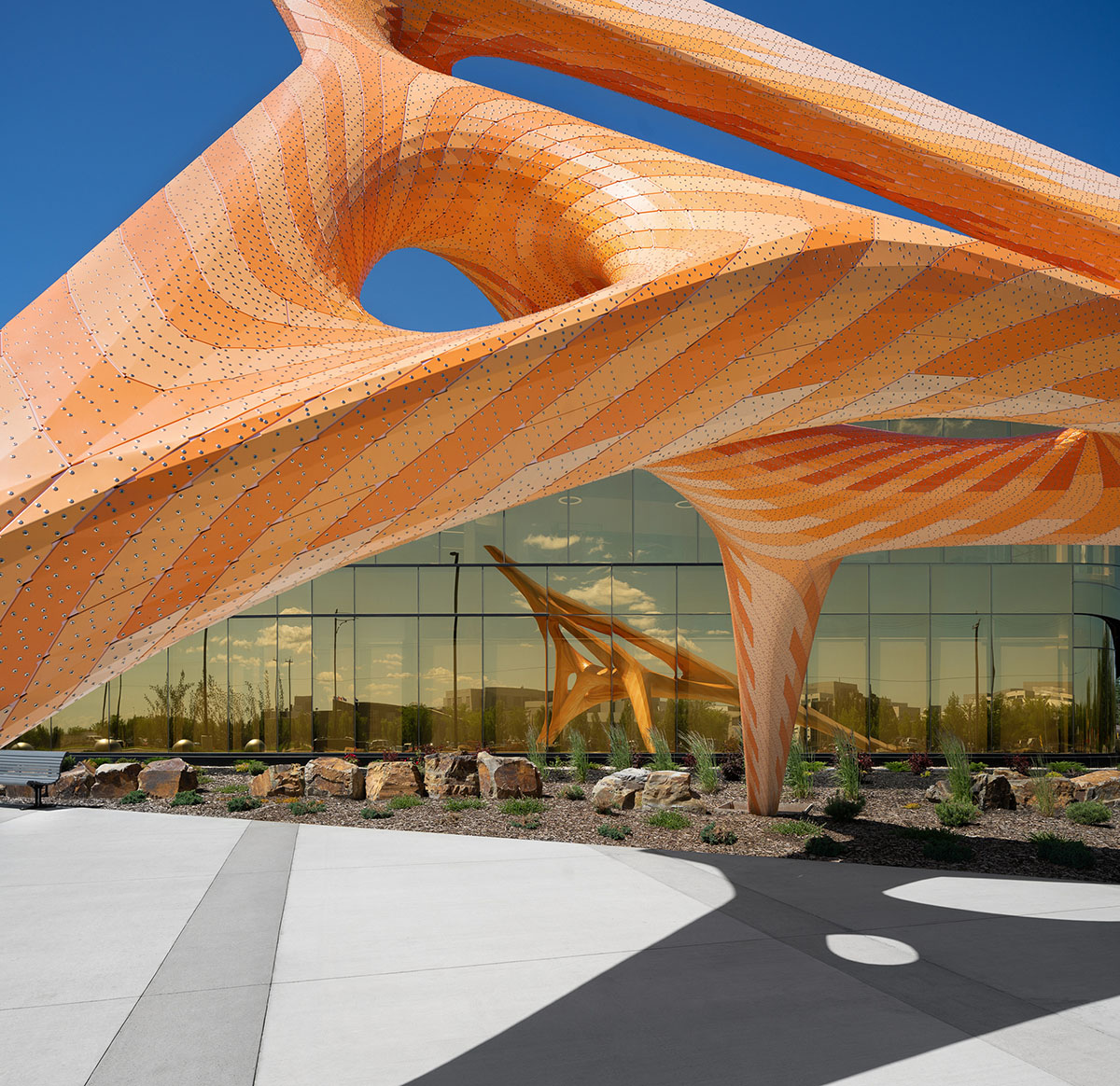 "Essential to its powerful presence, movement is captured in the twists of the stripes along with directional limbs.Twisting and assertive, Agent Crystalline attains a poised stance at this entrance representing authority and respect", says Marc Fornes. "Frozen Dynamics-Developed on an urban fragment on the outskirts of Edmonton city proper, Agent Crystalline asserts itself as an icon of this landmark campus. The objective is to appeal to the visual speeds of passersby from the nearby roadways. The form captures pulls in the kinetic energy of passerby and embodies visual speed. Authority is distilled in the surging motion captured frozen
in time", says Marc Fornes. 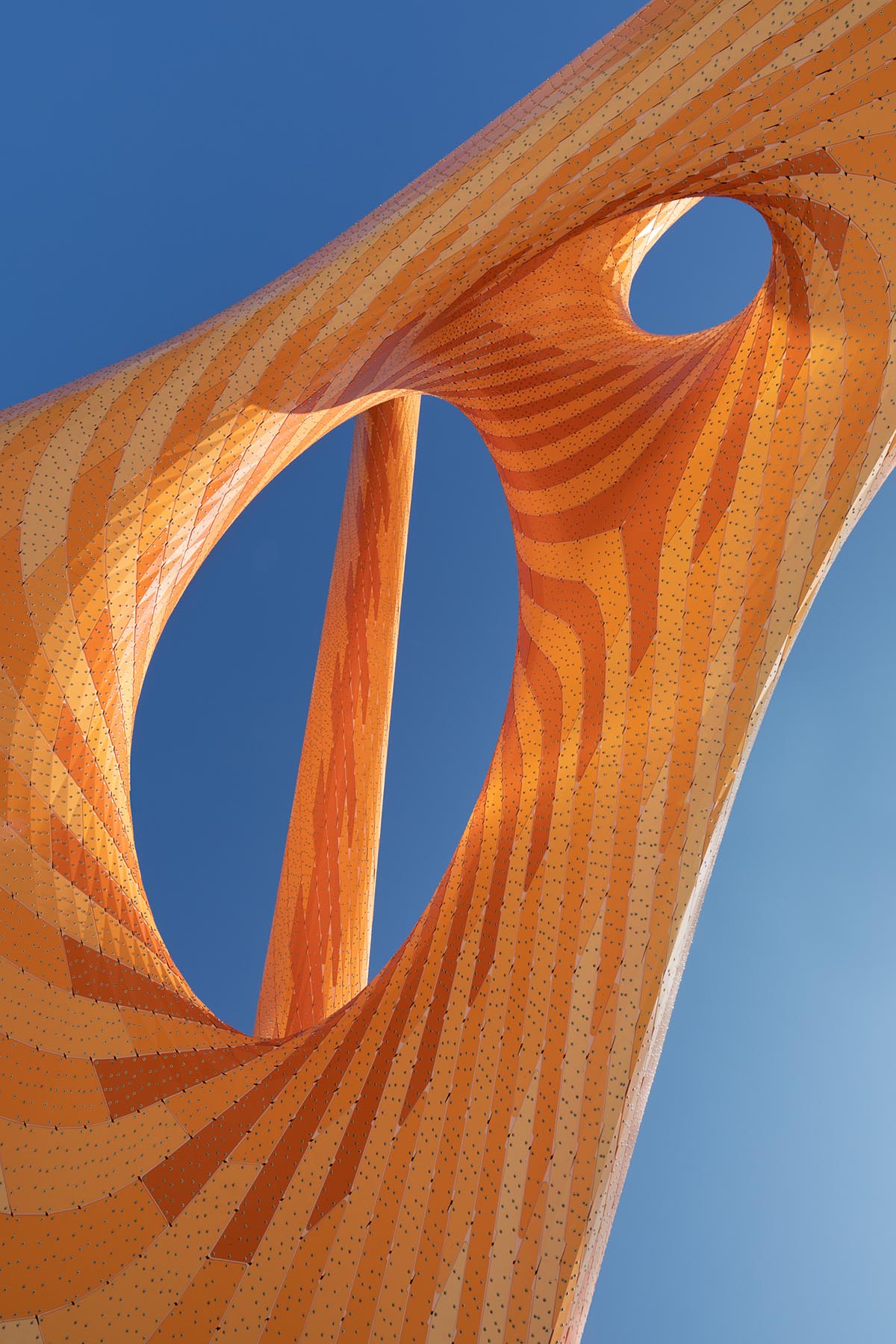 "Elements of different design eras -ranging from the groovy seventies to the organic minimalism of modern times- are sampled from and merged together in the aesthetic of the iconic gateway. This combination of styles produces an environment that pulls on a variety of contextual references. In discussion and in interaction, viewers may envision a traffic cone, a tangerine Porsche, or the vibrant whirls of seventies illustration", says Marc Fornes. 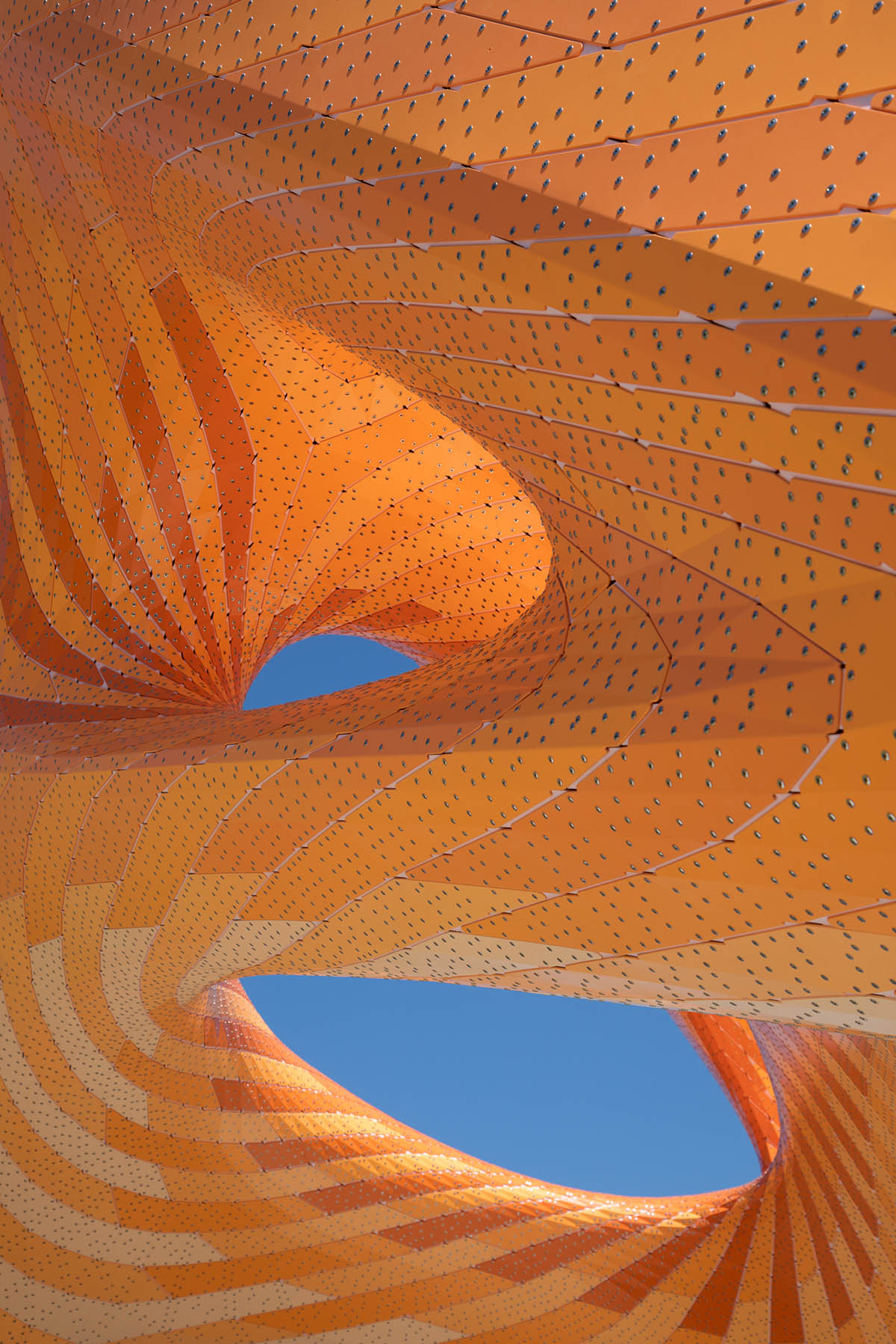 "Embedded pressure-Situated between the Police Campus the surrounding network of access roads, the artworkserves to connect all lines of sight and approaches into a single powerful node. The collection of these moving energies centers upon the convergence of three legs and shoots up into the sky", says Marc Fornes. 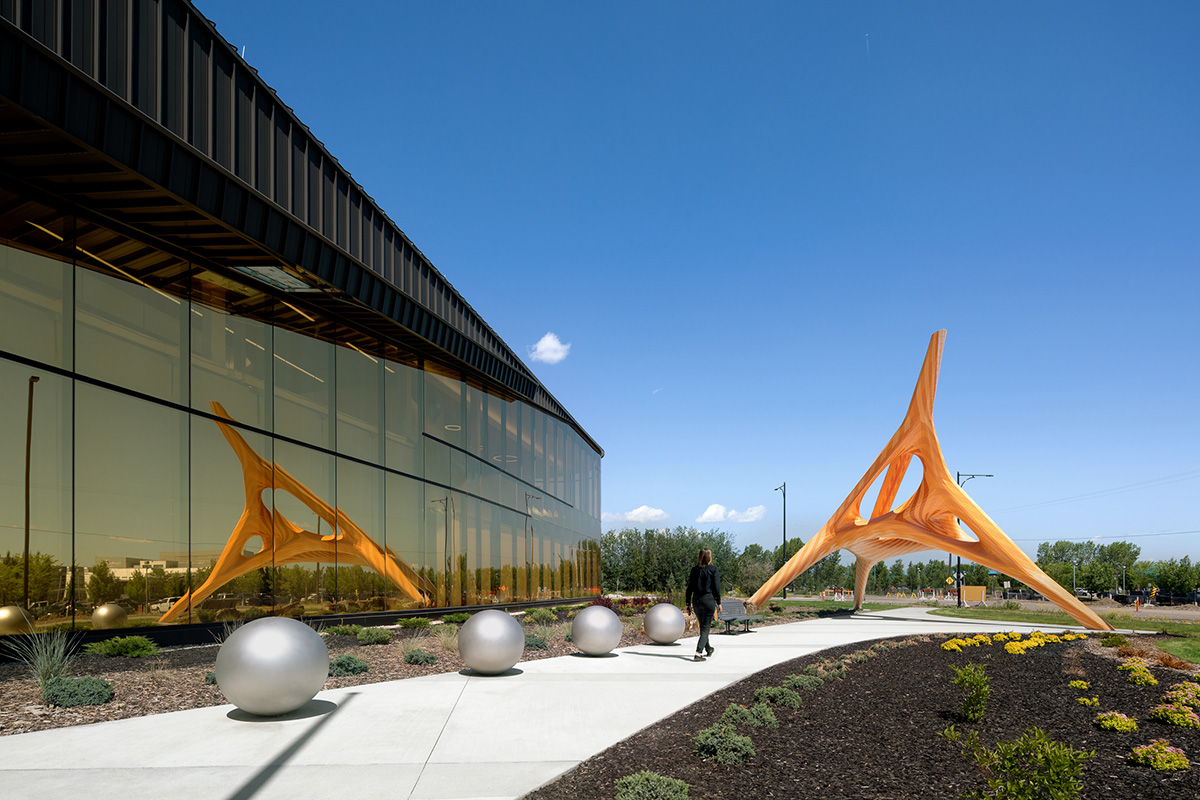