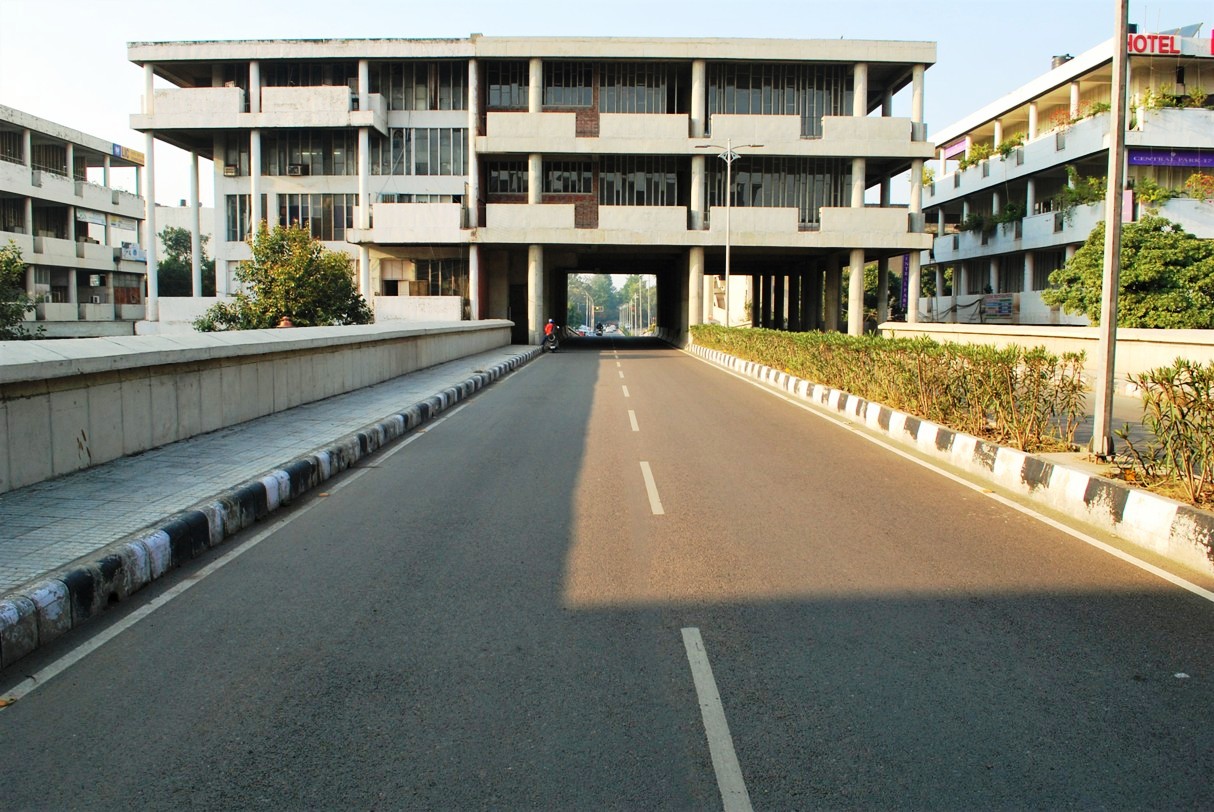 Towns are biological phenomena, according to Le Corbusier, and they have a brain, heart, lungs, limbs and arteries like human beings. Based on this concept while planning the city of Chandigarh, Corbusier placed The Capitol Complex at the top of the town because he likened it to the intellect of man, which emanates from the brain or the head. The industrial and the educational belts on either side of the city symbolize the limbs. The City Centre with commercial buildings, shops and offices represents the heart. The spacious parks and the green belts which run through the city provide the lungs. The network of roads for vehicular traffic and footpaths for pedestrians constitutes the circulatory system. 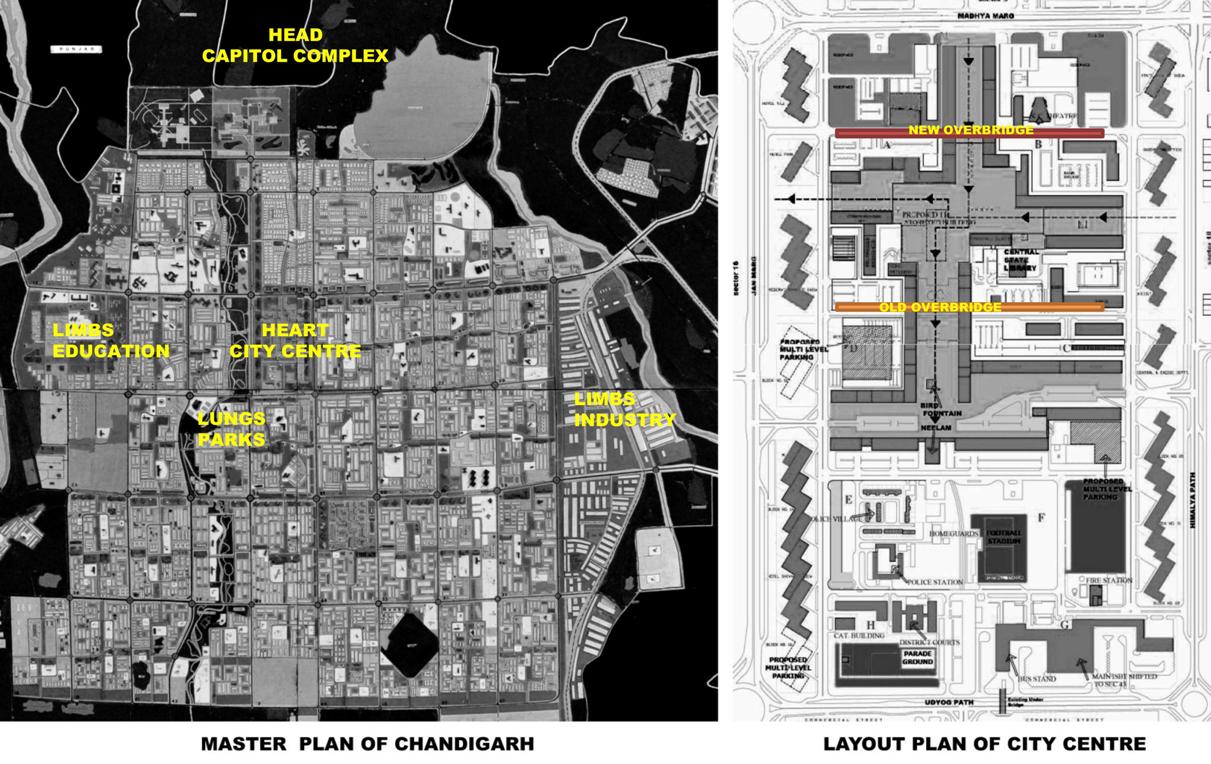 Le Corbusier-designed City Centre at Chandigarh has recently been added with its second overbridge which was a part of the original master plan. Corbusier had proposed two bridges to pass through the buildings at the upper level facilitating the movement of vehicular traffic through the City Centre without interfering with the pedestrian plaza below.

Till recently only one of these overbridges had been constructed. The second one remained out of the sight of the authorities for about six decades, and that too when all the other buildings in the Centre have been completed and were fully operational. 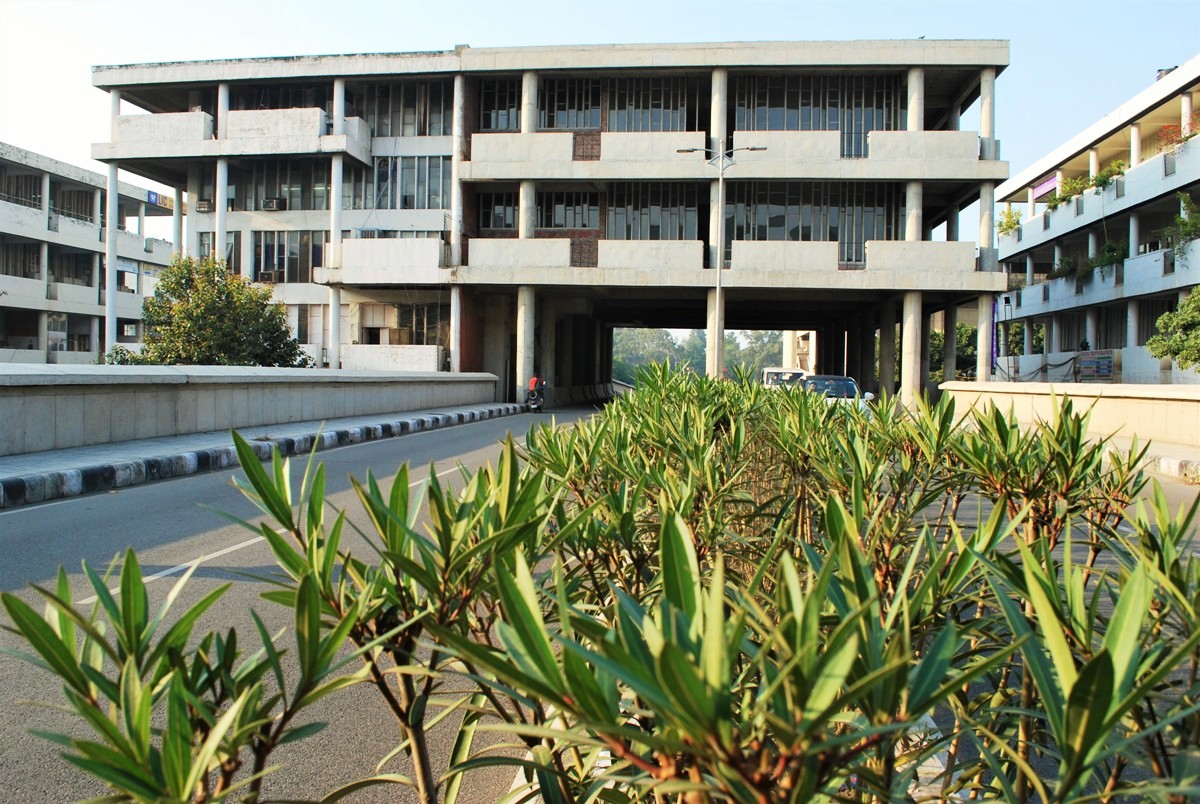 In the absence of the second bridge, a major chunk of the City Centre on its north-east remained out of reach of the pedestrians who have to cross the busy road for its accessibility. Finally, a good sense prevailed and the Chandigarh Administration completed this bridge as per plans prepared by Le Corbusier. With its completion, the outlook of the City Centre has been changed drastically and the functional requirements of the visitors have been fully met with.

Credit for the construction of overbridge goes to: (1) the Chandigarh Administration for allocating necessary funds of about INR 20 Crores and granting permission for it; (2) the Department of Urban Planning, Chandigarh for preparing detailed working drawings based on the concept of Le Corbusier; (3) the Punjab Engineering College, Chandigarh for conducting structural feasibility of the design; and (4) the Municipal Corporation of Chandigarh for executing the project at site. 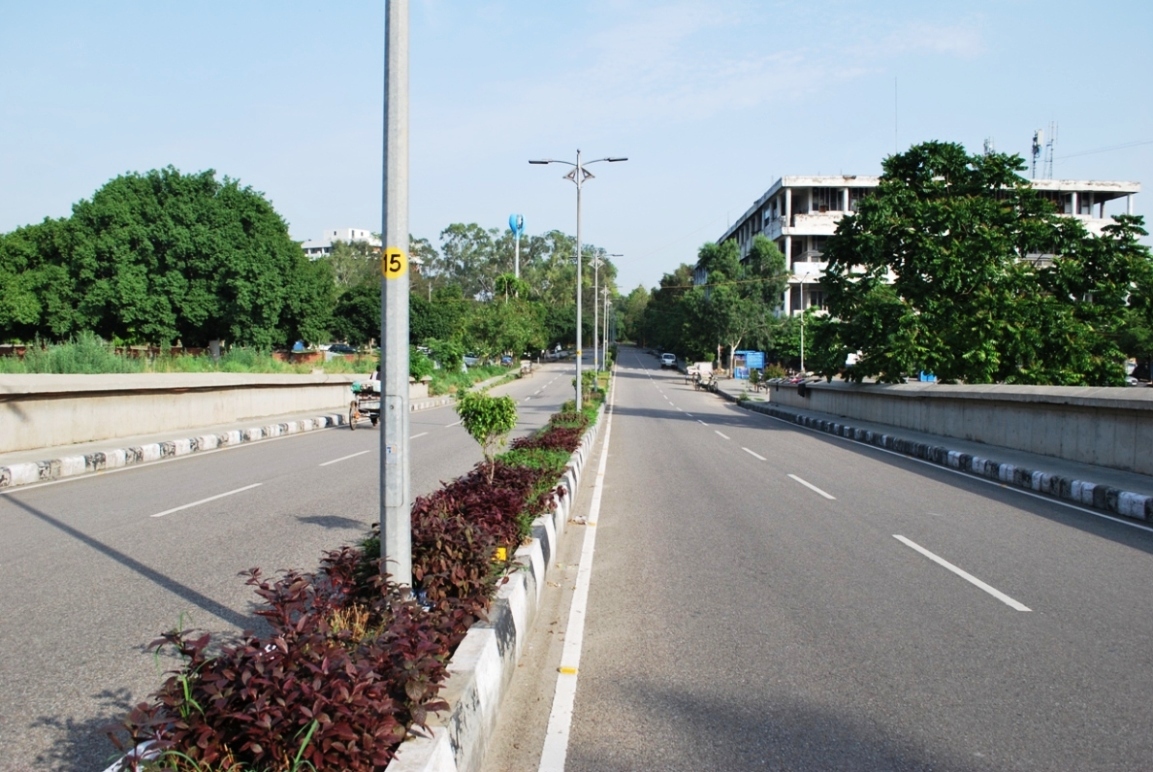 The efforts of Chandigarh-based architect Surinder Bahga too need a mention here who as a Nominated Councillor in the Municipal Corporation of Chandigarh gave impetus to this vital component of the City Centre. Surinder has to struggle a lot to convince the entire house of the Municipal Corporation about the importance and need for its early completion.

The City Centre of Chandigarh is the central geographical point of the city and the heart of urban life during the first phase of construction activity of Chandigarh. It is located at the junction of two V2 roads - Madhya Marg and Jan Marg - which have a heavy traffic load. The Centre is spread over an area of 97 hectares - an area equivalent to that of the one Sector of the city -  and is divided into two zones.

The north-eastern zone is meant for major commercial and civic functions and the south-western zone accommodates the functions of local administrations. these two zones are distinctly separated by a linear commercial strip which is in alignment with shopping streets on V4 roads of adjoining residential sectors. 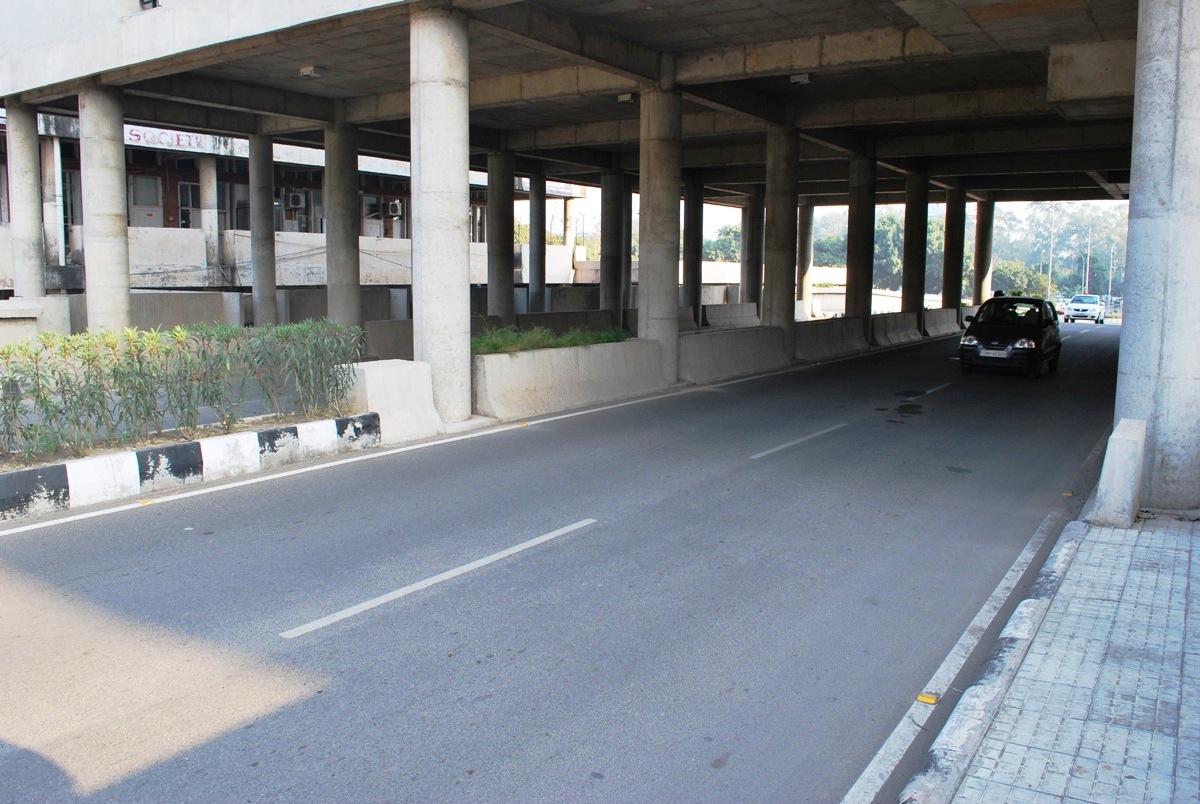 The entire commercial district, horizontal in character, is bordered by two rows of high-rise buildings along its north-west and south-east boundaries. Planned to cater to the diverse needs of government and semi-government agencies, these buildings have a controlled volume and facade treatment.

The north-eastern zone consists of shop-cum-offices, the Central State Library, the Town Hall, the General Post Office, the proposed Post and Telegraph Building (not yet realised), banks, cinemas and petrol pumps.

A central plaza which marks the crossing of two wide promenades is the hallmark of the City Centre. The first overbridge constructed in the 1960s, cross this plaza and segregates the vehicular traffic running above from the pedestrian movement at ground level. This overbridge facilitated the unobstructed flow of visitors on foot in the major portion of the City Centre. With the completion of the second overbridge, the remaining portion of the Centre on the north-eastern fringe too becomes contiguous with the existing plaza. 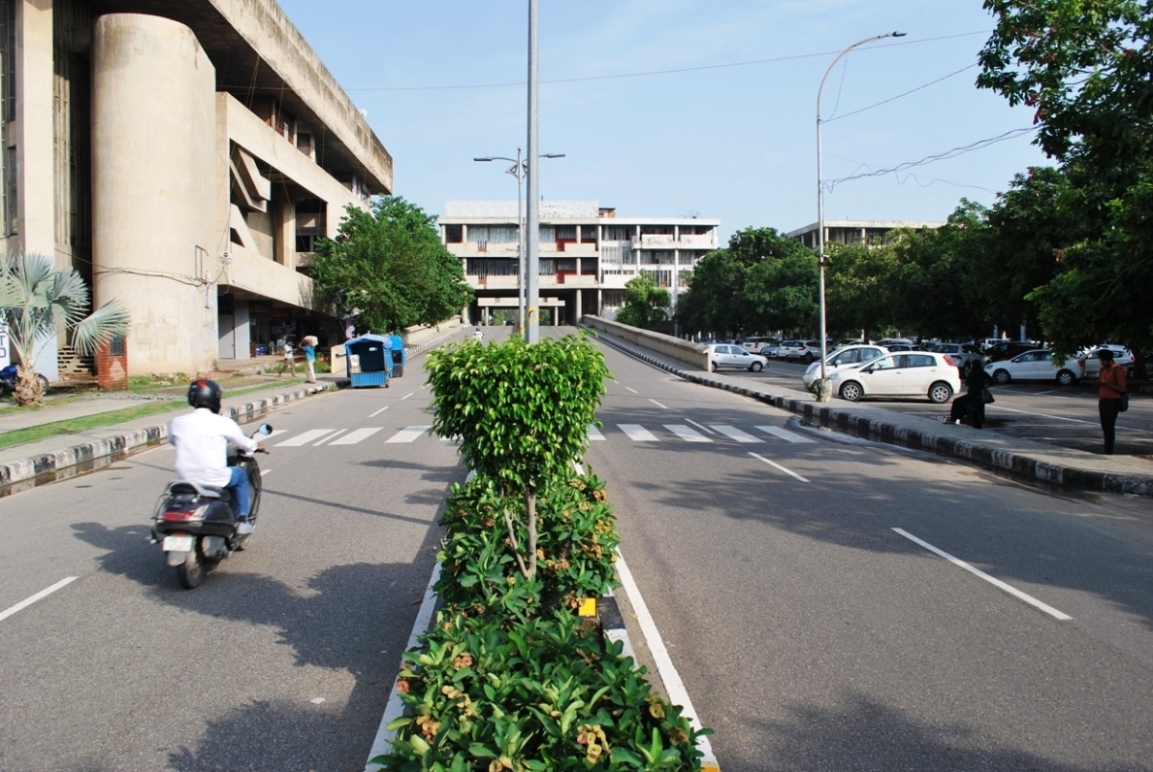 About 300-metre long overbridge has been constructed between Anand Theatre and KC Theatre. The bridge is two-lane dual carriageway with a width of 22 feet on either side and a central median. Footpaths for pedestrians have also been provided on either side of the bridge. Like the old bridge, the new one also passes through two buildings running perpendicular to it. The buildings above the bridge accommodate large office space at the third and fourth-floor level. This office space is in great demand and many government and semi-government organisations are interested to get it. Part of the space underneath the bridge accommodates 40 small shops/booths and public conveniences at ground level. 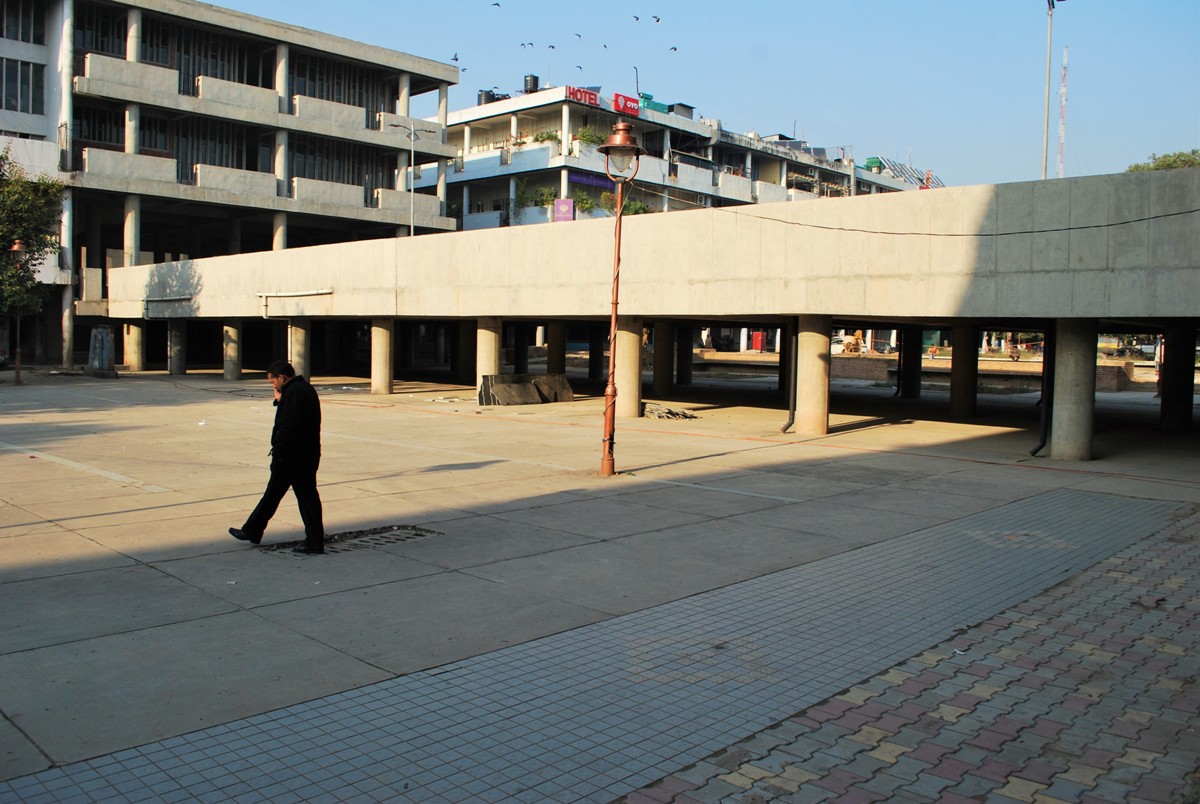 Construction of the overbridge was a herculean task as all the physical infrastructure under and around it had already been built. A lot of service lines like sewerage, stormwater, water supply, telecommunications, electricity etc., were passing underneath the proposed bridge. These lines had to be shifted prior to laying the foundations for the bridge. Secondly, the existing road which was running at the site of the proposed bridge had been planted with several Kadam trees on its sides. These trees had to be removed prior to the commencement of construction work. As per the prevailing rules and regulations, the removal of trees was a difficult task. Municipal Corporation had to obtain environmental clearance of the project and special permission to remove the existing trees. In the bargain, the Corporation has to plant five times more trees at some other place as compensation to the environment. These issues were not only difficult to address and time-consuming but with the will of the authorities, all obstacles were crossed. 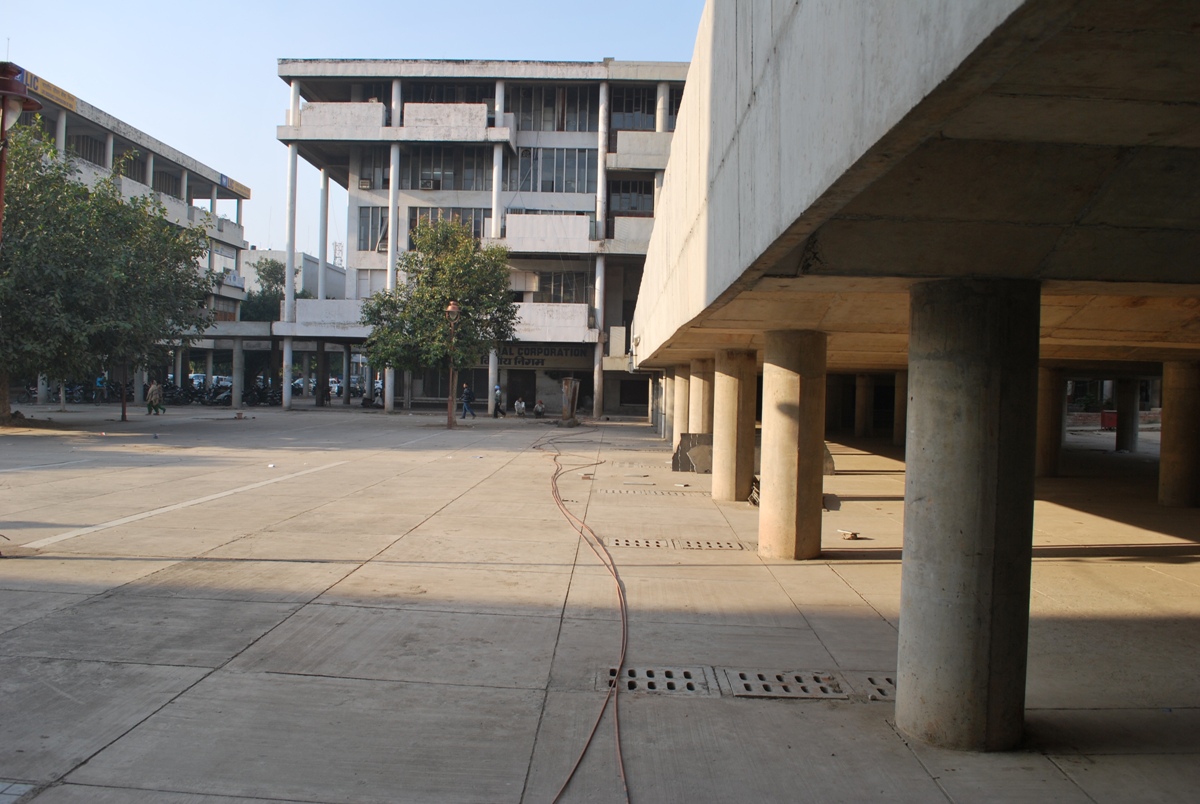 Apart from fulfilling the functional requirements, the overbridge adds to the visual delight of the built environment. It gives a feeling of completeness to the urban centre. Had it been completed in Le Corbusier's lifetime he would have been very happy to see it. 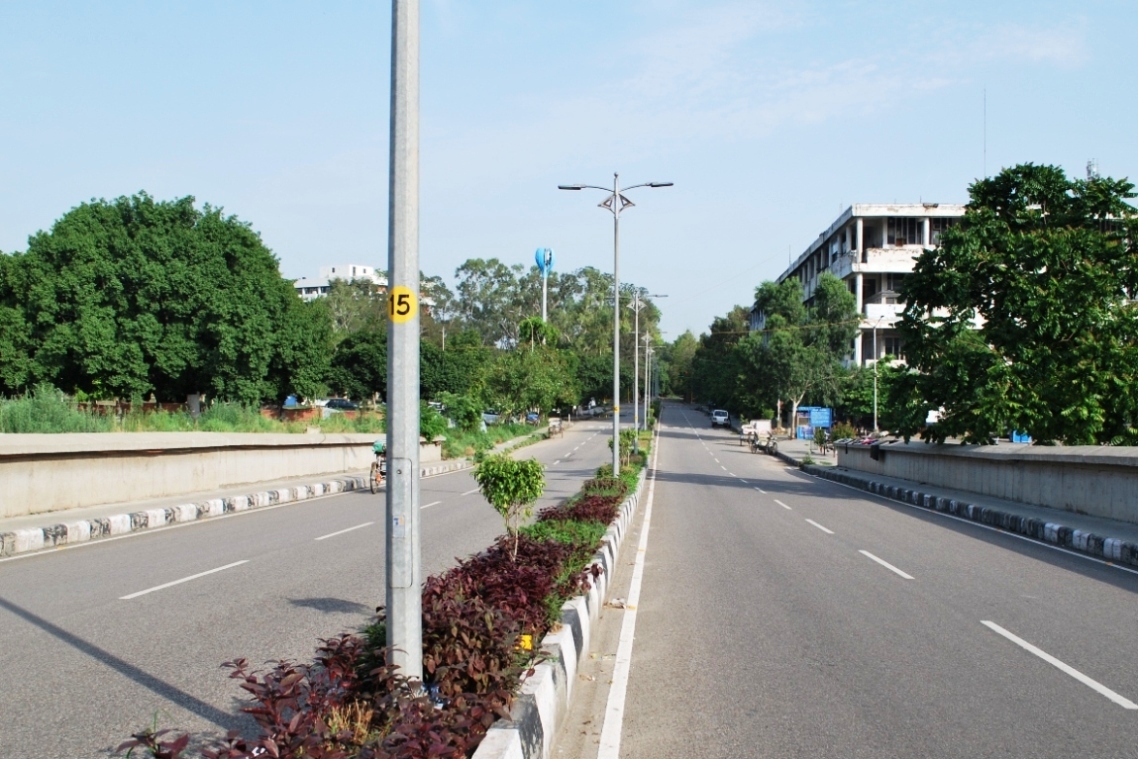 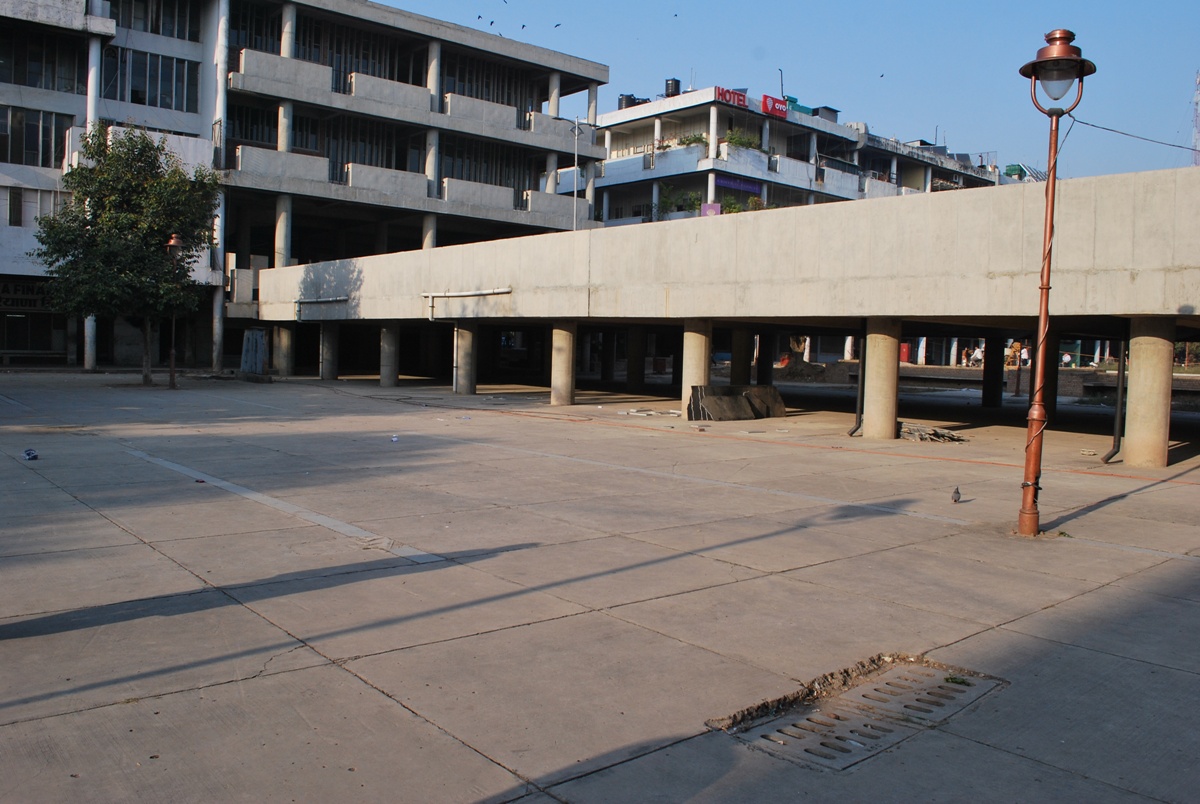 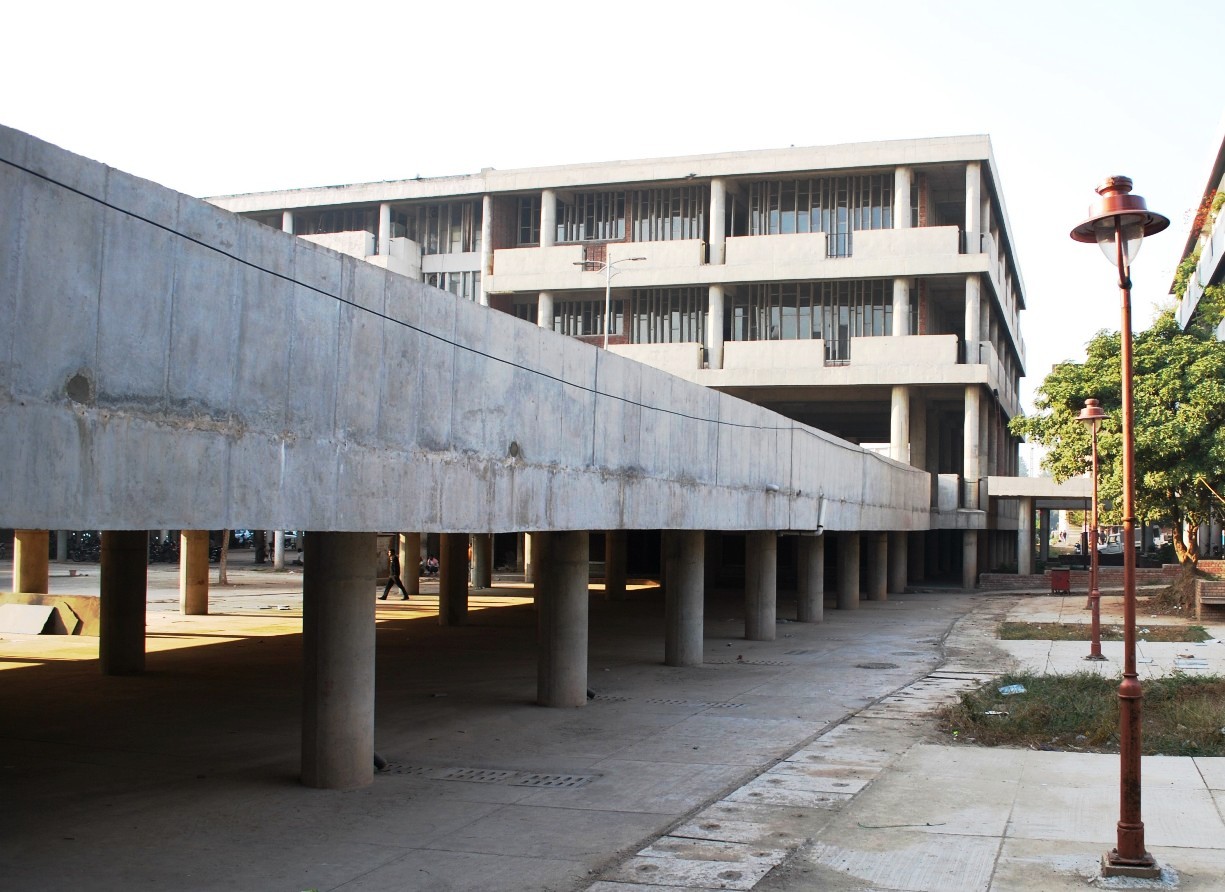 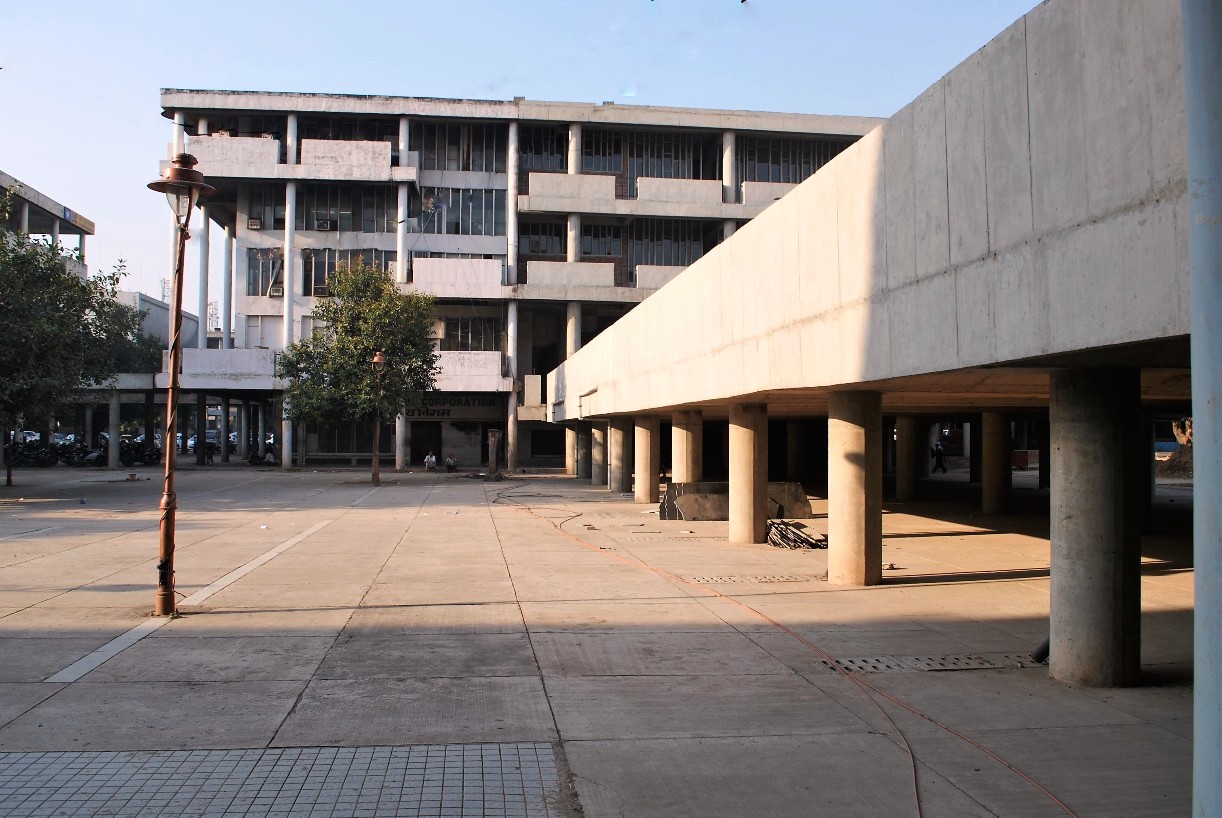 All images courtesy of Surinder Bahga.

> via inputs from Saakaar Foundation.