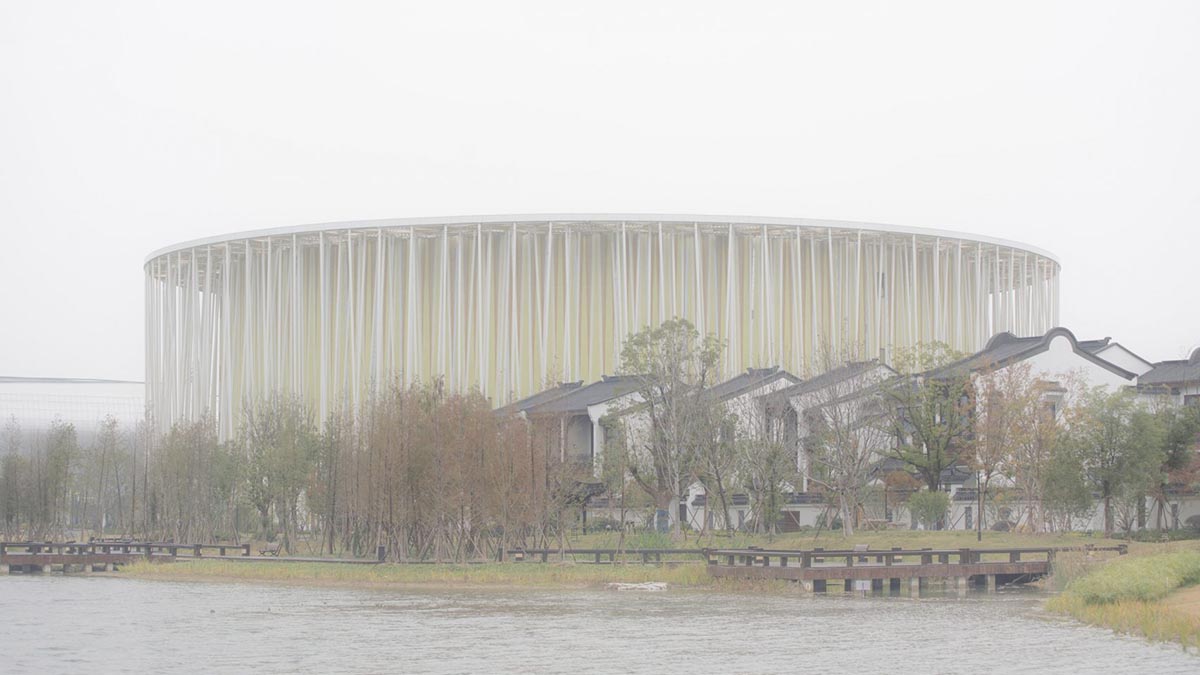 London-based architecture practice Steven Chilton Architects has completed its new theatre in Wuxi, China. Named Wuxi Taihu Show Theatre, the 2000-seat theatre is wrapped by a bamboo forest of white columns and creates a curtain-like effect, while allowing to move in between columns.

Steven Chilton Architects revealed its primary concept in 2018, and the structure was completed in one year approximately. The building, including 365 columns in total, will be a permanent home for Belgian theatre director Franco Dragone's "permanent water show", the House of Dancing Water. 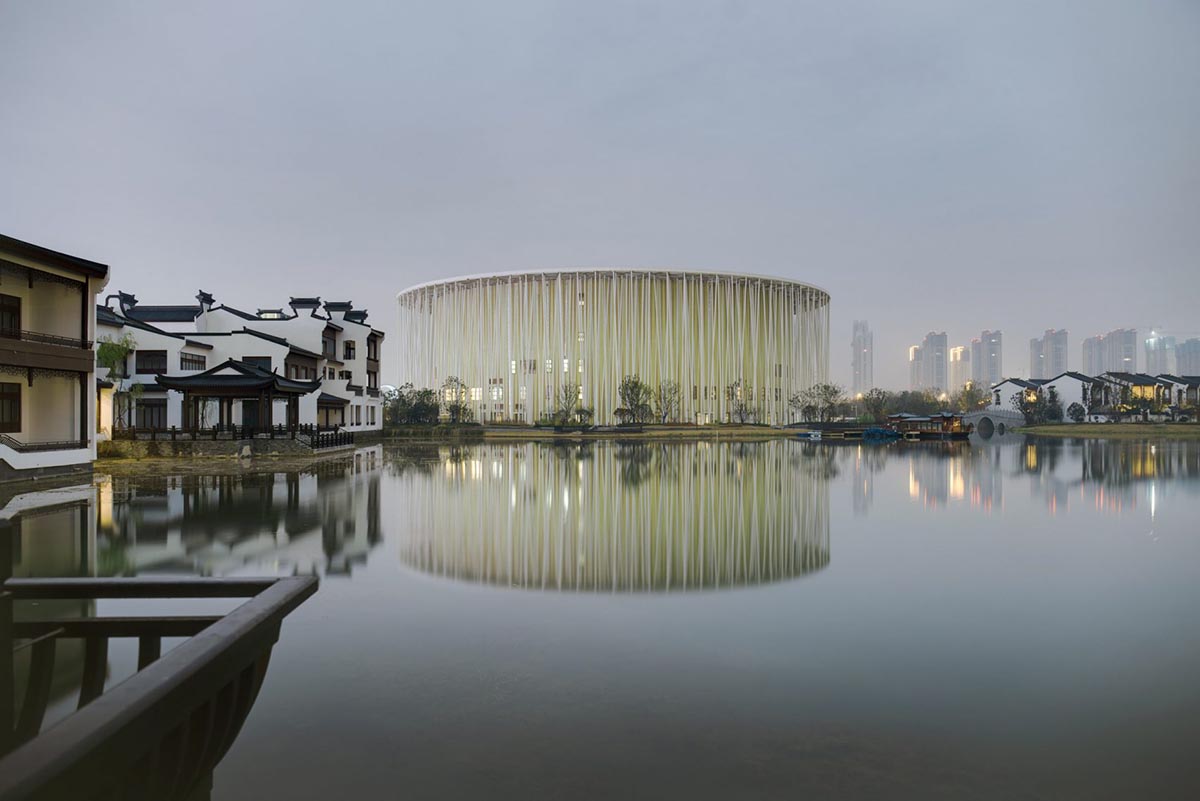 Located close to Lake Taihu in Jiangsu Province, China, the project was inspired by the sea of bamboo park in Yixing, the largest bamboo forest in China. The building’s appearance is composed of three primary elements, the columns, the shade canopy and the building envelope.

"Representing an abstract impression of a bamboo forest, the slender white columns are positioned around the perimeter of the building in such a way as to provide a screen between the building façade and surrounding landscape," said Steven Chilton Architects.

"The ‘bamboo’ columns clear around the various entrances to help frame the accesses into the building." The shade canopy wraps around the perimeter of the building at roof level. Conceptually, it represents the canopy of leaves that exist at the top of a bamboo forest.

The canopy is made up of various triangular bays containing rows of gold anodised aluminium louvres. Each bay is orientated randomly to create an organic quality to the structure and light and shade patterns that fall across the building envelope through the day. Each bay of louvres is also set at different angles to heighten the sense of variation when viewed from different angles. 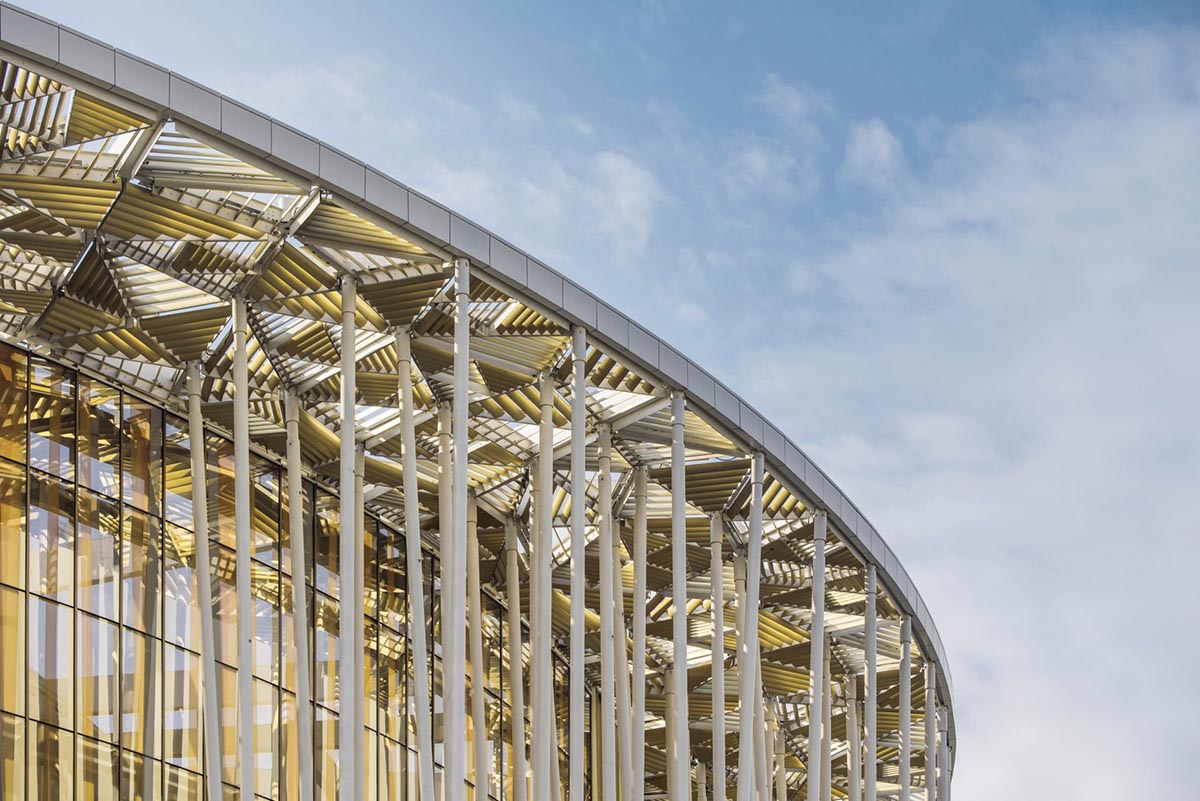 Structurally, each bay of louvres is supported on a triangular lattice structure that braces the tops of the columns and transfers their load into the primary structure of the building. The environmental purpose of the shade canopy and columns are to provide shade over the surface of the façade to passively lower the cooling load on the building. 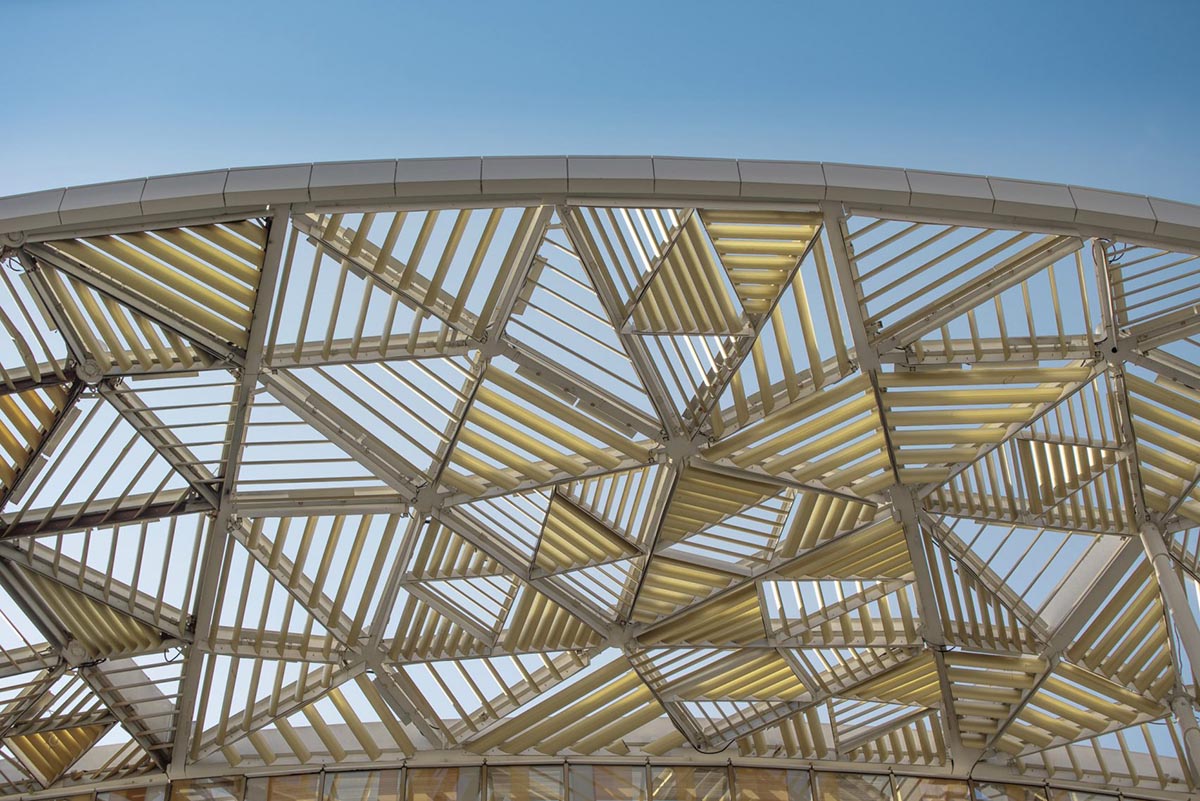 The building envelope is primarily composed of rendered and painted block-work and curtain wall glazing. The glazing is the full height of the building in and above the entrance lobby to provide maximum views into and out of the main public areas.

It is fretted with white and gold stripes that travel the full height of the building mimicking the ‘bamboo’ columns and contributing to the effect of the building being the outer edge of a forest of bamboo. At night, the building envelop is illuminated from below, becoming an ethereal beacon, glimpsed between the forest of ‘bamboo’ columns, drawing spectators and audience in from across the lake and surrounding development.