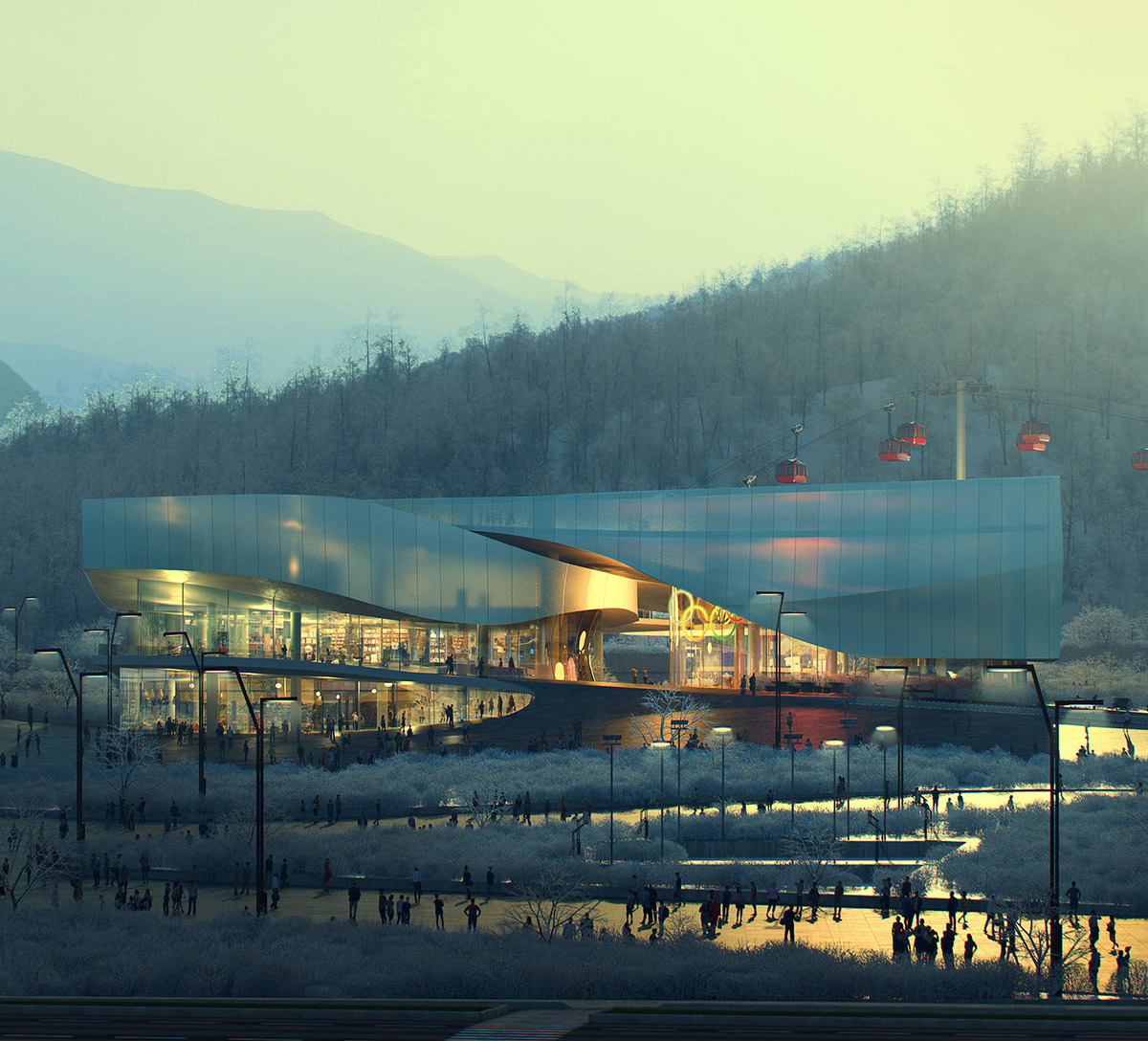 This pivotal museum will extend the legacy of the 2008 Beijing Olympics into an enduring strategy for the Olympics to become a catalyst for sustainable social and economic development.

According to IOC president Thomas Bach, Beijing 2022 is to "set a new bench mark for a sustainable Olympic Games, on the one hand benefiting from the legacy of the Beijing 2008 Games and on the other hand developing a new winter sports destination in a sustainable way".

Being the first city in the world to host both the Summer and Winter Olympics, Beijing will be showcasing a twofold strategy of reuse and rejuvenation for urban venues and sustainable development for regional venues providing infrastructure and long term benefits to rural regions.

Making full use of the legacy venues of Beijing 2008 as well as Shougang - the spectacular former steel plant, Beijing’s urban area will host all the ice events (curling, ice hockey and skating), four snow events (snowboard big air and freestyle skiing big air, men’s and women’s) and the newBig Air Snowboarding event. Two key regional centers: Yanqing, home to the Great Wall, and Chongli, an existing skiing destination are to host the alpine skiing, sliding, and all other snow events respectively. A new highway and high speed train will connect the Chongli region to Beijing in 46 minutes. 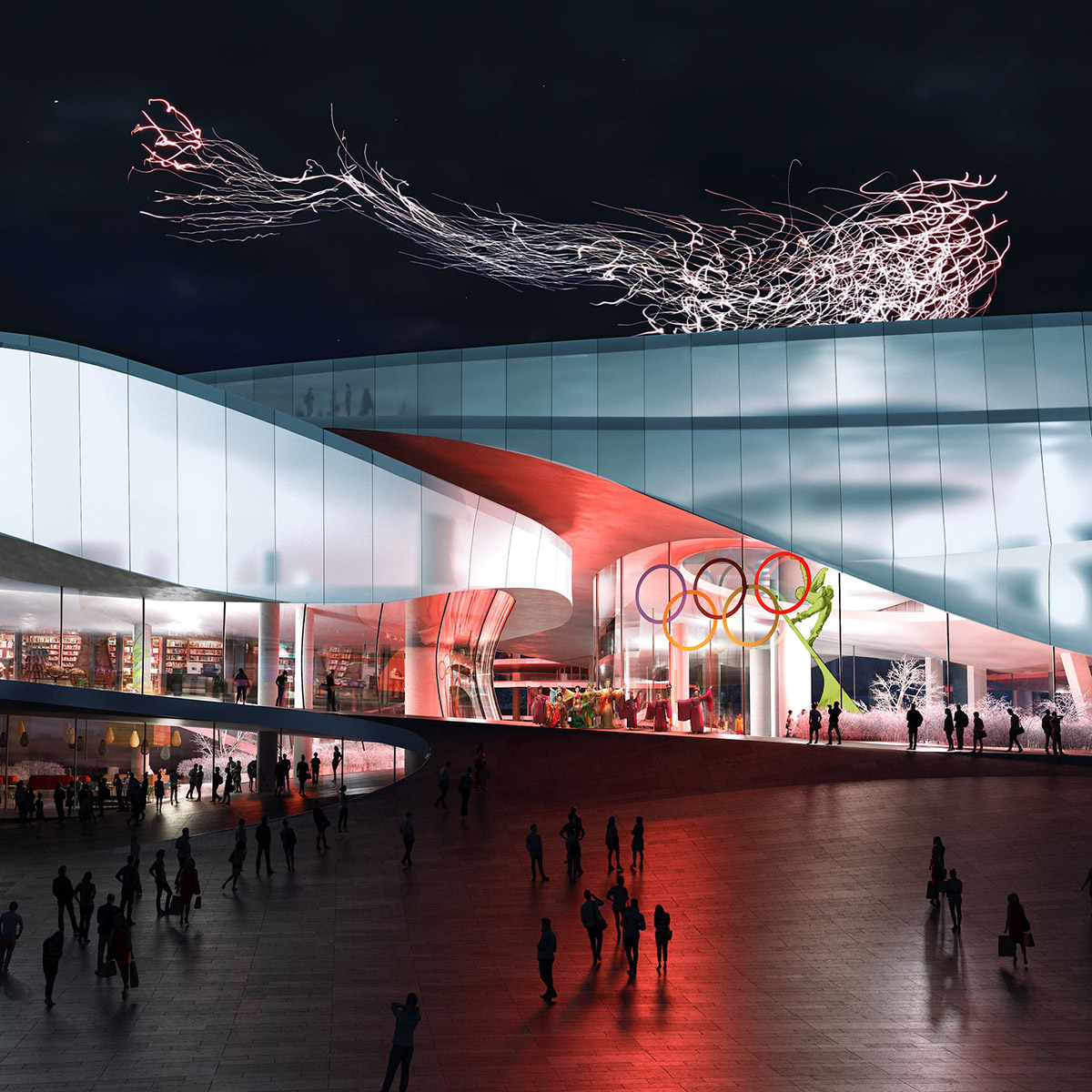 For Chongli, this is a critical opportunity to become the center of development of winter sport in China, utilising it’s natural mountainous resources and giving back long term opportunities for the rural region. It is in this spirit that the Chongli local government conceived a plan to revitalize the town center with the addition of the world’s first Winter Sports Museum and Academy to best convey the Olympic Spirit to future generations. Following an open public bidding process, maison h was selected for a competition with two other teams for both the building design and town center redevelopment. 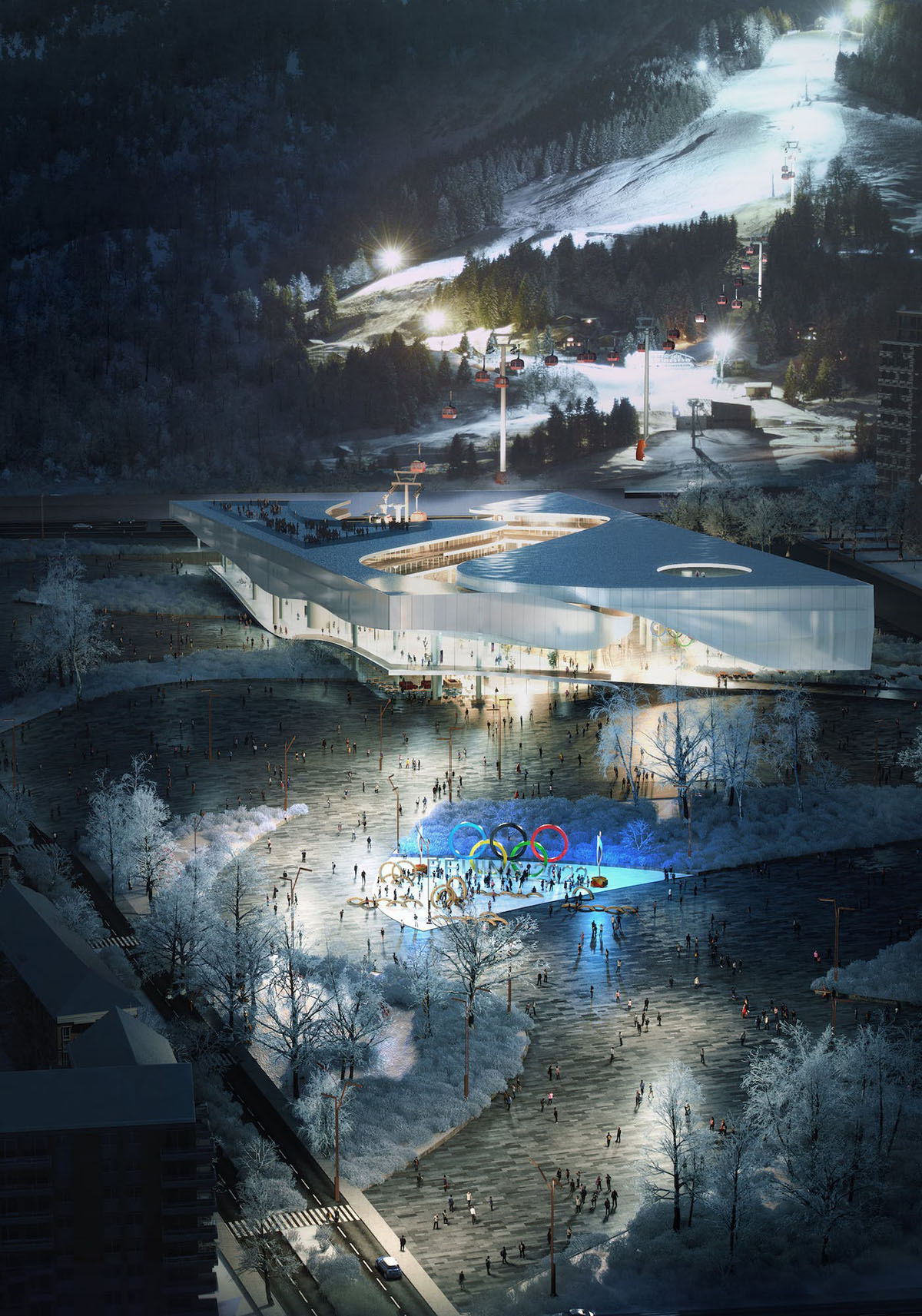 In order to initiate Chongli as China’s leading winter sport destination, the Winter Olympic Museum needed to be much more than museum. In addition to exhibition venues, maison h conceived a specific program that also include a dedicated Olympic Academy with libraries and research facilities focused on the Winter Olympics, Youth Olympic Training Center, VR Experience Center, Mountain Sports Center, Cable car station and related commercial as well as conference facilities; an integral plan to lift the region’s economy in a sustainable way.

In the design for the Master Plan, maison h looked beyond the site limits and aimed to integrate the wider 2022 Winter Olympic venues, the surrounding mountains, Chongli’s various existing ski resorts, and new developments in a linked plan that includes 180,000m2 of mixed-typology residential areas and related public facilities.

The proposed rejuvenation of the town center utilizes a public space strategy to establish a beneficial connection between local/regional residents and global tourists that increases future economic opportunities. 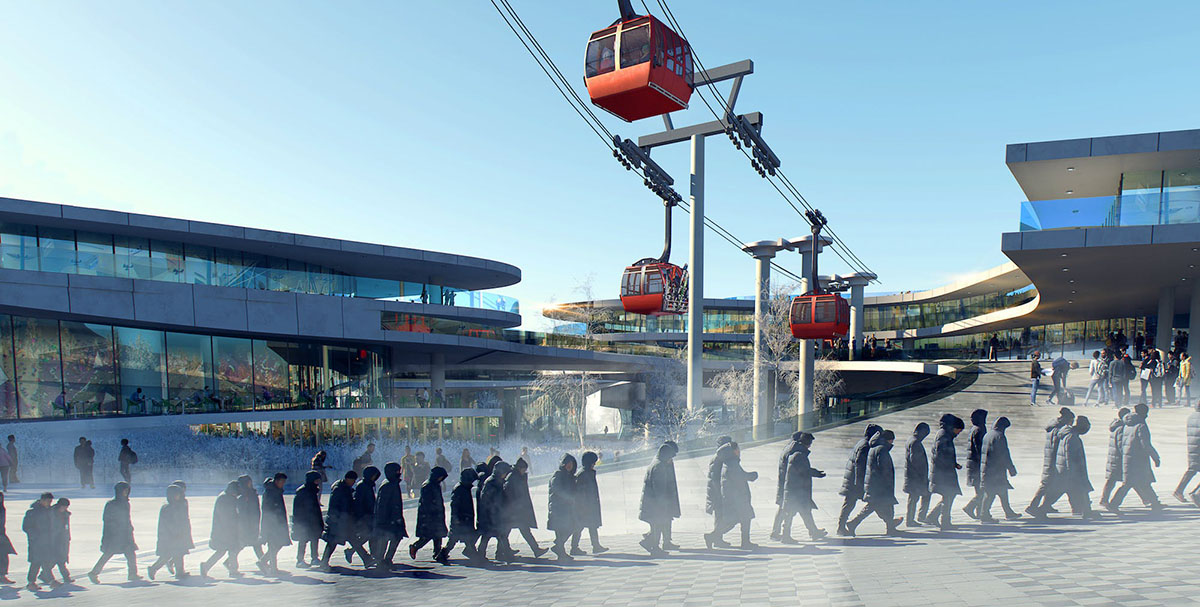 Step 2: A pivotal museum that merges landscape and architecture

Fully considering the pivotal role of this site within it’s urban/regional context, and the building as a symbol of the Olympic Legacy, the design aims to anchor the urban space while integrating the topography of the natural surroundings into the buildings’ architecture. Starting from the town center side that forms the formal front of the project, the existing sloping terrain is gently sculpted into a public route that provides direct access to every floor in the building.

From the mountains behind, a new ski-slope will pass under the existing highway ending in the heart of the new building. Visitors can reach the top of the ski slope and an adjacent Hall of Fame by a direct cable car connection from the building’s central valley. The proposed cable station further links to planned ski resorts and slopes. 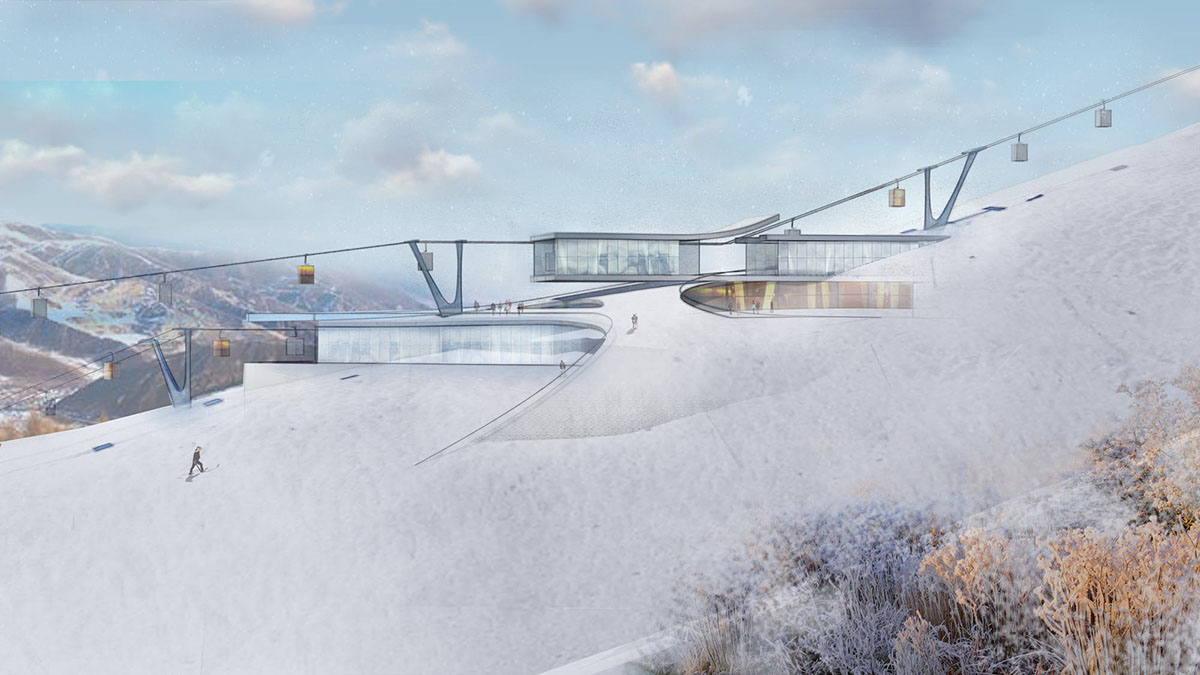 The building design itself is based on the theme of the Winter Olympics as a “destroyer of dividing walls. It calls for air and light for all” - Pierre de Coubertin (1863-1937). maison h thus proposed a welcoming and fluid space that is open, inclusive and without dividing walls. The landscape is seamlessly interwoven to become indoor exhibition areas, a climbing wall or conference seating. The building mass is lifted off the ground with a minimum footprint thus respecting the natural environment while improving quality and connectivity of the public space in Chongli to the comprehensive regional development plan.

Programmatically, the design of the building is divided into four elements, connected in a loop, surrounding the central ‘Olympic Valley’; maison h designed the four program elements to cater towards various user groups in both the high and low seasons.

The building is conceived as a state-of-the-art sustainable building, optimized for the harsh local climate, with self shading facade overhangs, minimal window openings on the South and West sides, and a zero-energy power concept with PV panels on the roof.