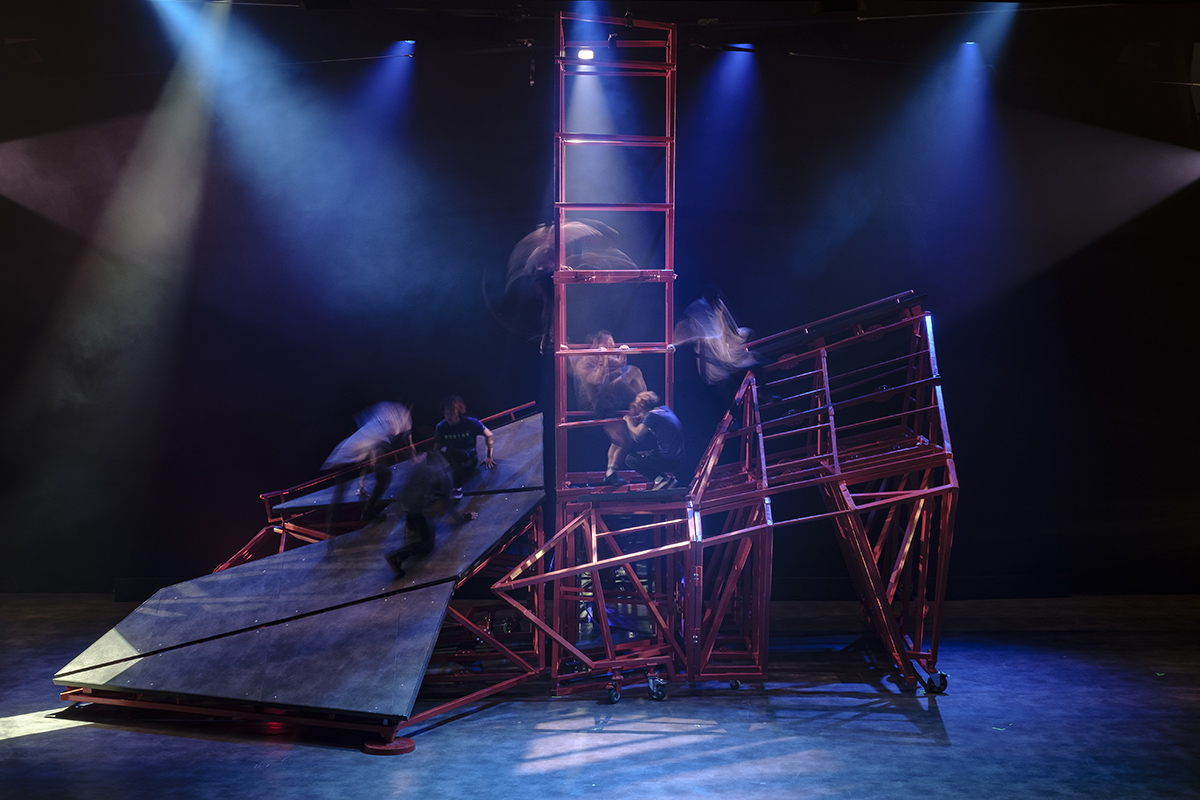 Oblique Land, designed by Salon Alper Derinbogaz, is an imaginative set of mobile structures accompanying and facilitating a theatrical performance. The design is a part of the performance titled “Let the Right One In", which is currently displayed at the Zorlu PSM in Turkey. "Let the Right One In" is a theatrical adaptation that is based on a book by John Ajvide Lindqvist. Lindqvist’s story was adapted to cinema by the director Tomas Alfredson who takes the story not like a vampire horror but rather puts emphasis on the relationships, emotions and weaknesses of the main characters, Oskar and Ellie. 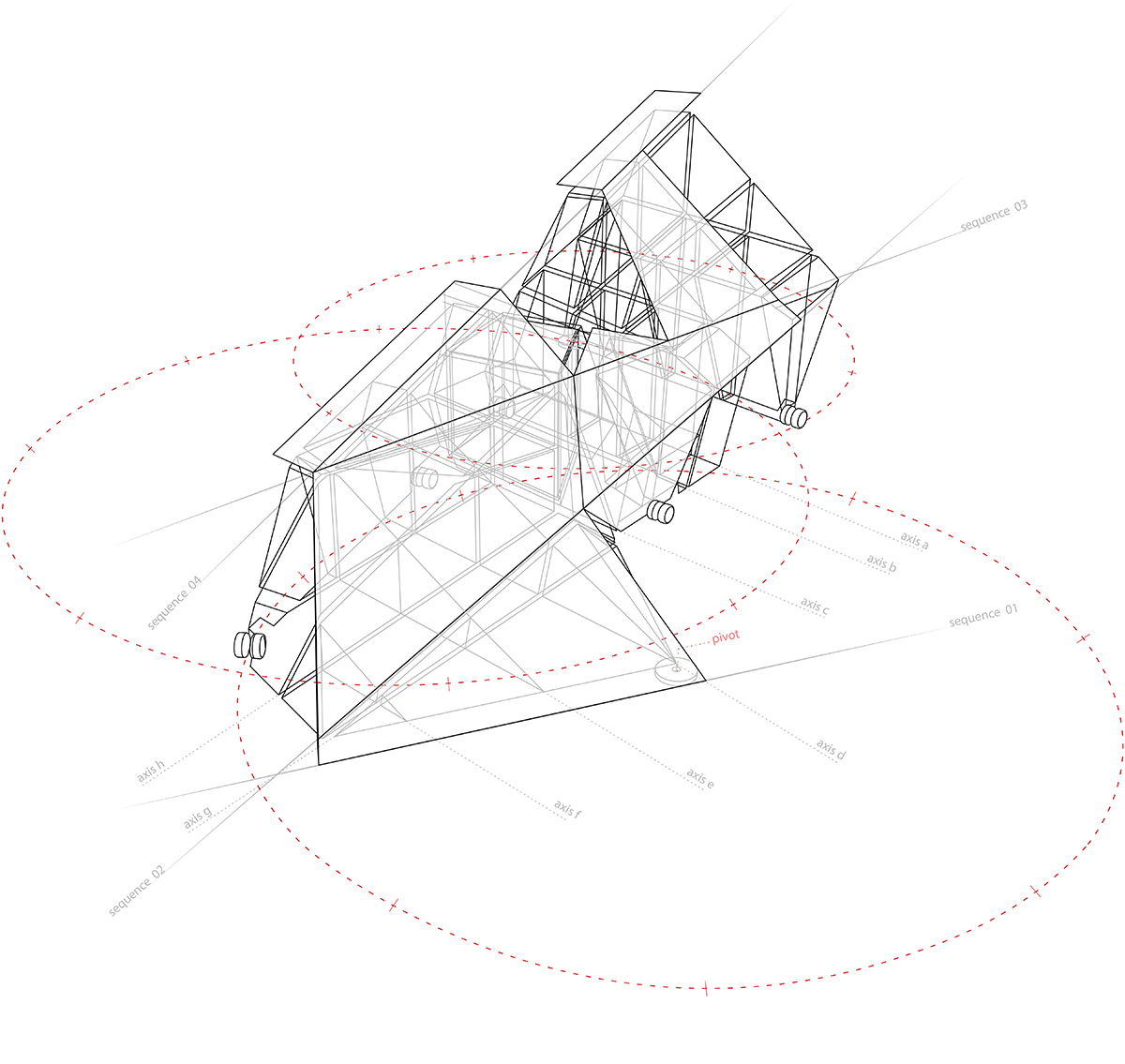 “We were excited to receive an invitation from the DOT Theater team for designing the stage of “Let the Right One In” play, the theatrical adaptation of Jack Throne. As soon as we read the script, the idea of creating a dialogue between the space and performance emerged. Within the given limits of the stage we were free to reinterpret the architecture of the play," says Salon Alper Derinbogaz, describing their project. 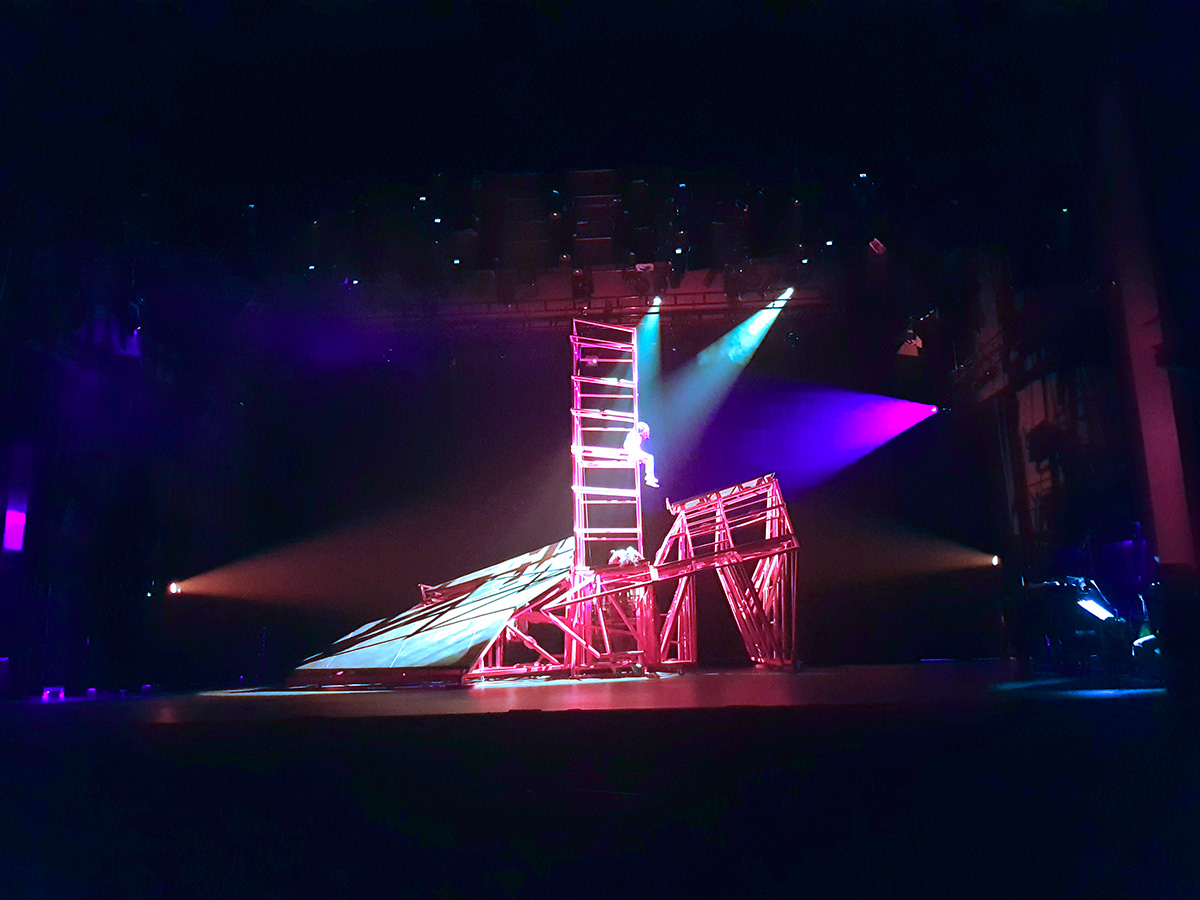 In the story, the main characters Oskar, a 12-year-old school boy, and Ellie, a young girl become friends. Ellie has recently moved into the town with a man who we think is her father or a lover who has grown old while she remains being young. We find out that this man helps Ellie for her constant needs.

The Concept-Topography As A Storyteller

"We approached this performative challenge as an architectural production that explores its own context. The dimension of the stage, the view and the placement of the audience were the parameters that guided the design process. We pushed the limits of the spatial borders and redefined the expansion of the stage," says Salon Alper Derinbogaz. When the three modular parts of the topography unify, Oblique Land provides a smooth arrival until the peak point. These are the special moments that also imply the times when Oskar and Ellie complete each other. "The steel structure transforms itself into a topography that represents not only the different spatial experiences but also the emotions and the differences of the play characters. Oblique Land is not only a stage design but rather an architectural experience that works both in horizontal and vertical spatial dimensions. The topography is in flux," says Alper Derinbogaz. 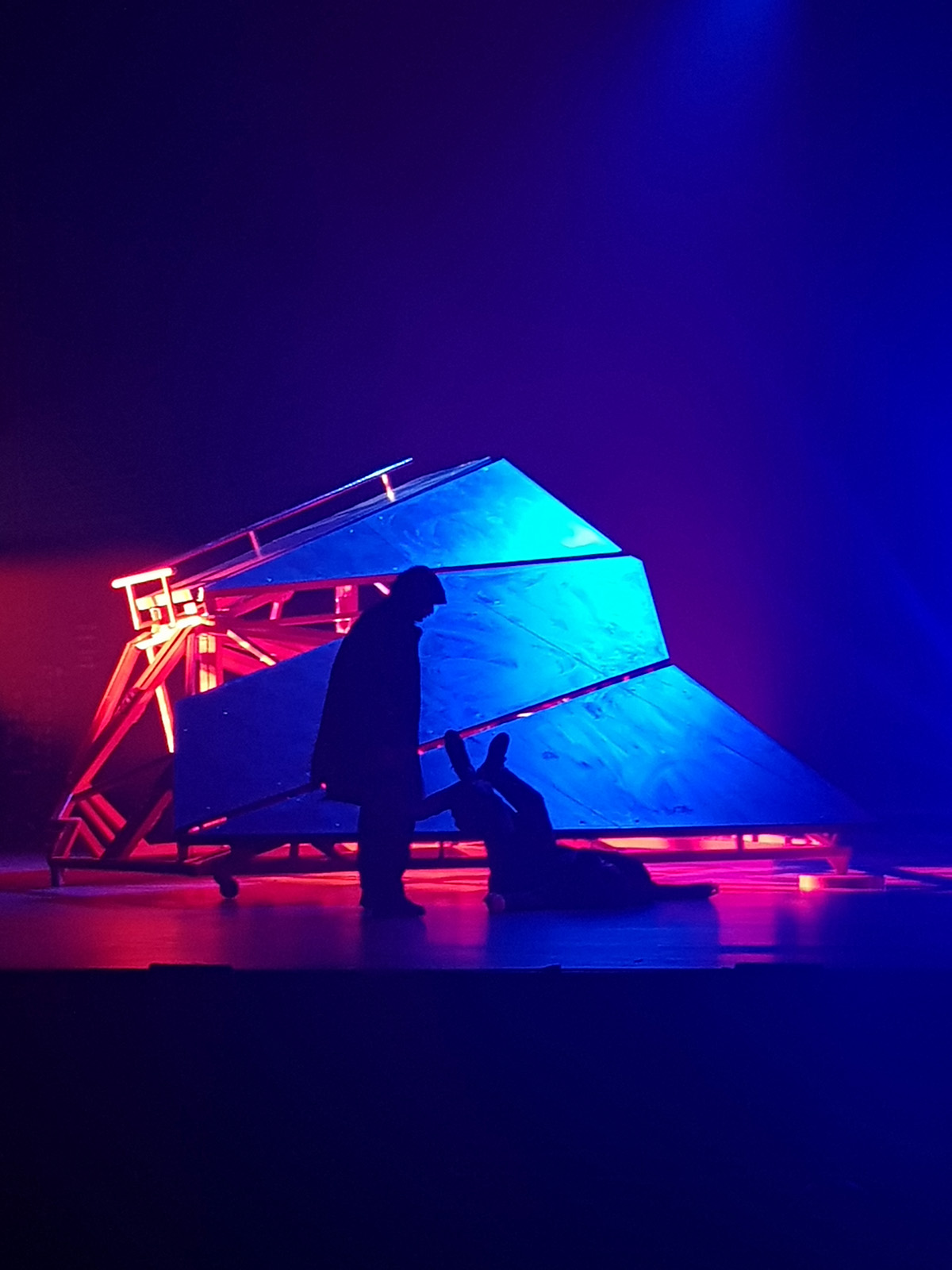 The design intends to reinterpret the theater's stagnant stage repertoire and to articulate it as a dynamic landscape rather than a background. Oblique Land is a dynamic landscape and consists of 19 different modules. These modules standing on a mesh structure, reinforced with bolted joints can be interconnected and separated from scene to scene according to the specific moments of the play. 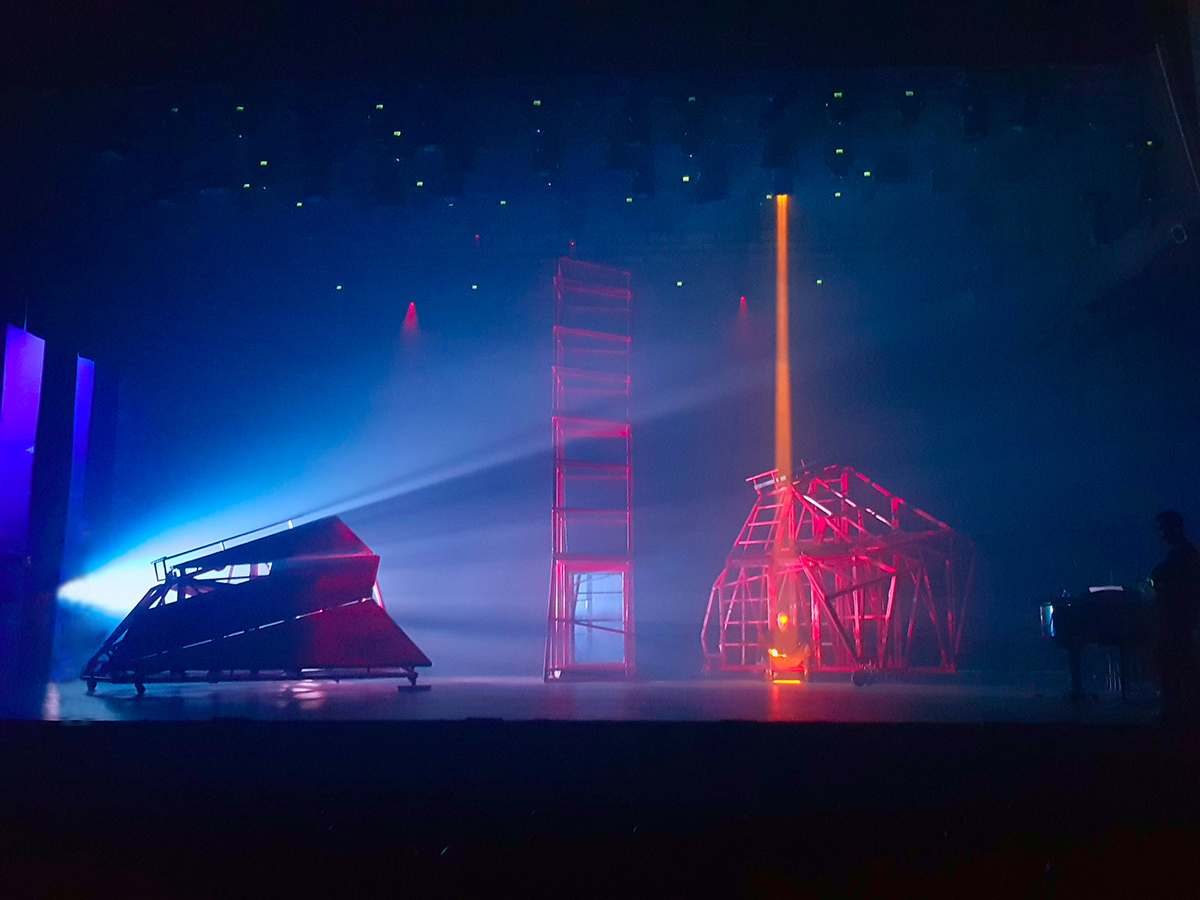 The direction of Murat Daltaban was based on the flexibility that has been possible with this modulation as well as its exploration. Daltaban used the inclined surfaces for various type of spatial narration, such as a frozen pond, a facade or interiors in order to strengthen the feeling of the space at certain moments. Therefore the structure and the narration have an intimate contact throughout the play, beyond visible. 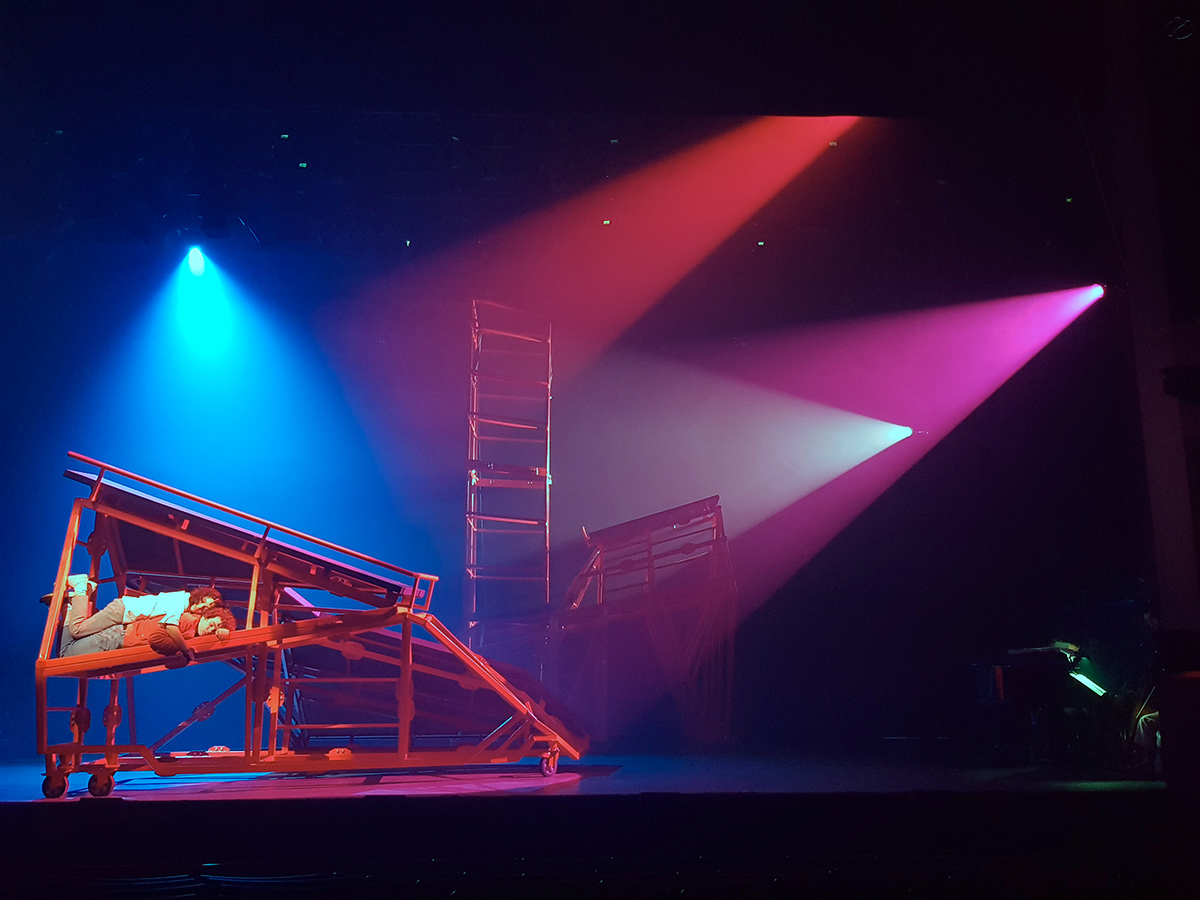 The floor of the Oblique Land is broken in half with the pool at the center that means in total there are three different parts. In addition to being modular, the two modules can also rotate around their static hinges. When the rhythm of the narration change as a result of the characters interaction, Oblique Land begins to move and rotate and we actors play along this architectural movement.

Salon Alper Derinbogaz is an international design practice based in Istanbul and Los Angeles and they develop projects within architecture, art, product design, interior design, urbanism, research and development.

“We care about setting contemporary tectonics, re-thinking architecture as carefully curated ideas and moments. The spaces emerge from different aspects, scales and moments that surround them. Every involvement is an intervention. Hence comprehending the existing, expanding its merits and deficiencies architecture leads to redefine the living environment and fabricate novel, intensified experiences within them," says Salon Alper Derinbogaz. 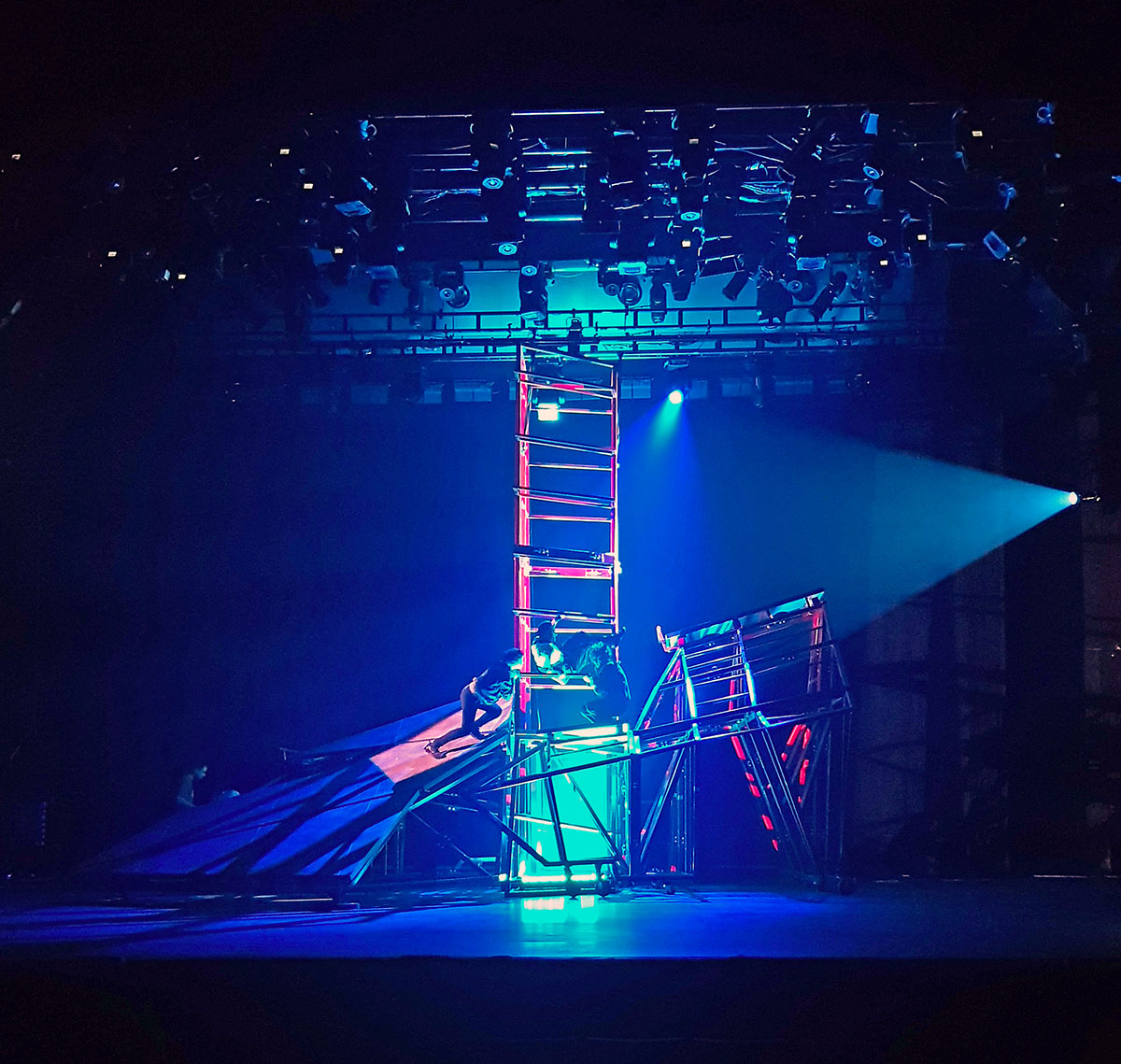 "The new tools help us to rethink the borders between design and technology, art and architecture, physical space and users. We refine and create new hybrids out of the processes. Within this principle, our practice focuses on the activity of iterating from the physical outcome of research processes and discovering new ways of intervening to the environment”, says Salon Alper Derinbogaz.

Recognized as ''an emerging and influential architect'', Alper Derinbogaz investigates the possibilities of physical environment through the potential relationships between space and time. His design approach mostly relies on the importance of re-evaluating the context and intensifying it through interventions in multiple scales. Thus, his design varies in scale from the museums to installations, intending to uncover and question the essential elements of the given site and the theme.

Three of his built works, Gate, Panorama and Augmented Structures were included in the Best Architecture of the Year Selection, and received the Arkitera Young Architect Award in 2011. He graduated from Istanbul Technical University in 2005. He received the Fulbright Scholarship for his master degree in Architecture and Urbanism Department at the University of California, Los Angeles by completing his degree with the UCLA Graduate Award. Derinbogaz also leads his architectural design studio at the Istanbul Technical University as a senior lecturer.

All following images courtesy of Emre Gökmenoğlu, unless mentioned otherwise.