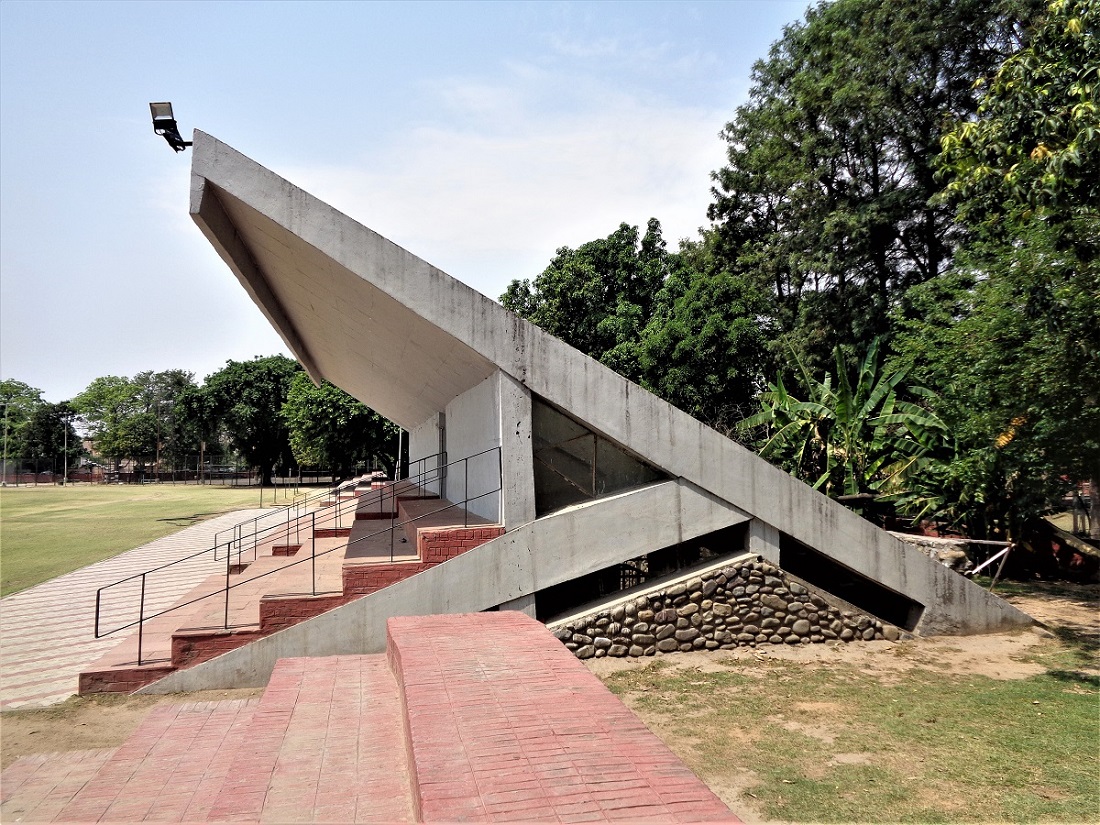 As is widely known that concrete is a very versatile building material and has unique plastic qualities thus, it can be moulded in any shape. It can be used for a variety of structural components as well as external finishes also. Le Corbusier was perhaps the first architect who used reinforced-concrete on a large scale in the Capitol Complex of Chandigarh in India. Its main buildings like the Secretariat, Legislature Assembly, and High Court are constructed in concrete.

After the exploitation of concrete by Le Corbusier, his colleague Pierre Jeanneret, who was otherwise known as the master of brick, has also used concrete in the Panjab University’s Administrative Building, Library, Gandhi Bhawan, etc. Chandigarh thus set a new trend of reinforced-concrete buildings in the history of modern Indian architecture in the post-Independence era.

Le Corbusier and Pierre Jeanneret’s many Indian architect colleagues too got inspired by the use of concrete as a modern building material. Many of them tried their hand on it and as a result, there are a number of remarkable buildings, both small and big, in Chandigarh. Many of them are not well known and never featured by print or electronic media. 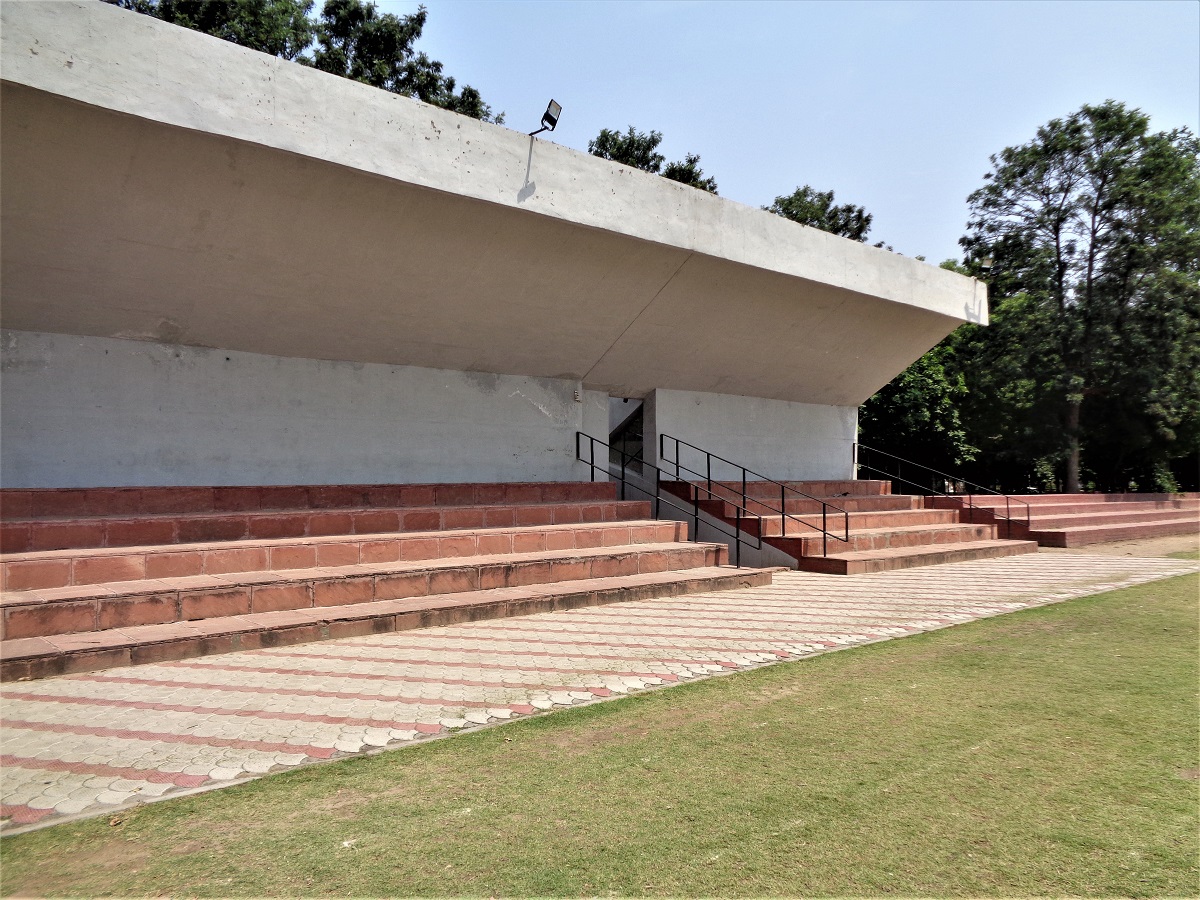 One such small yet beautiful reinforced-concrete building in Chandigarh is Football Stadium in Sector 17, and Sector 46. At both the places, the same architectural design has been followed. The design of this stadium was prepared by architect OP Mehta who was one of the Indian colleagues of the master architects. Mehta worked on the capital project of Chandigarh and later rose to the position of Chief Architect of Chandigarh Administration.

The seating pavilion of the Football Stadium, though not very large, but has all the ingredients of an outstanding concrete building. The properties of concrete vis-à-vis its plasticity, and ability to hold large cantilevers, have been fully exploited in this building. 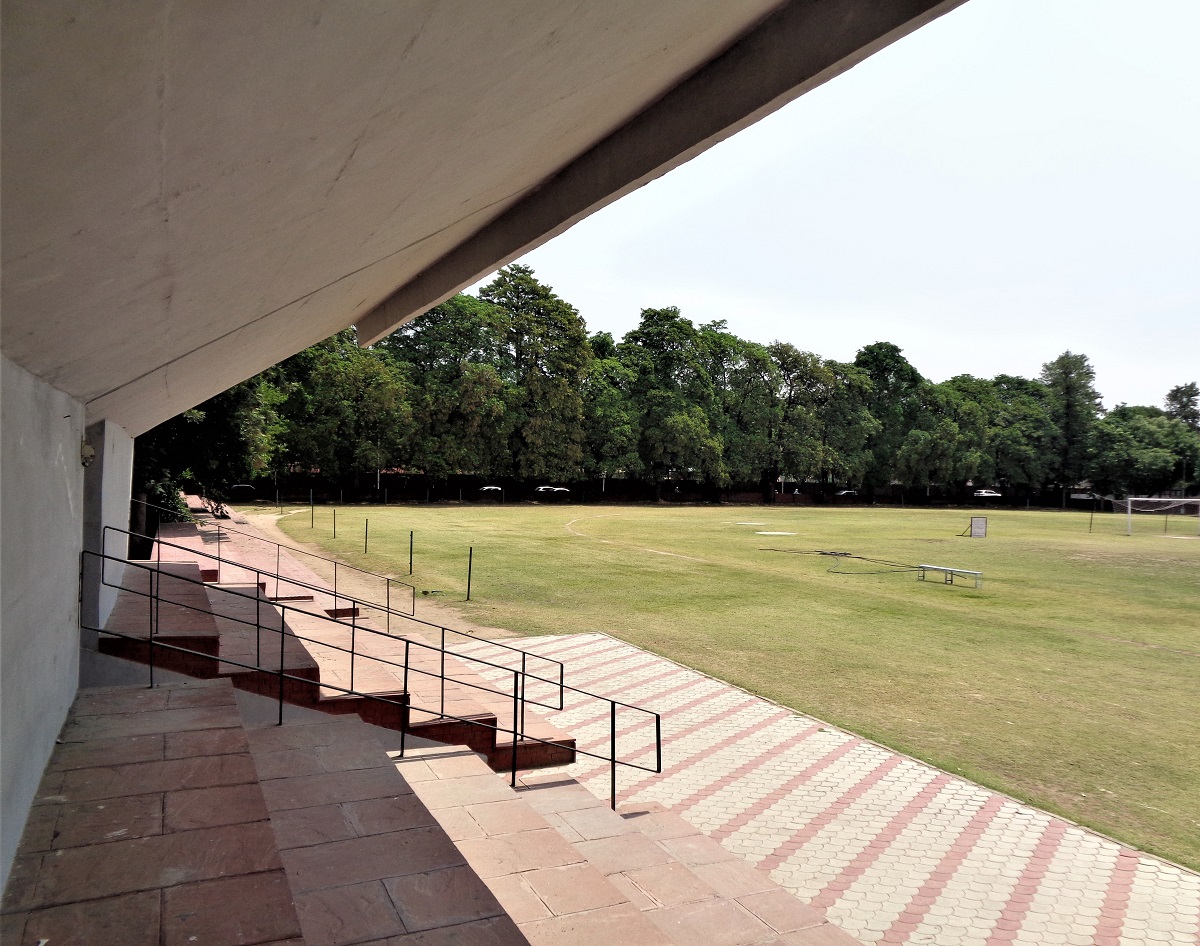 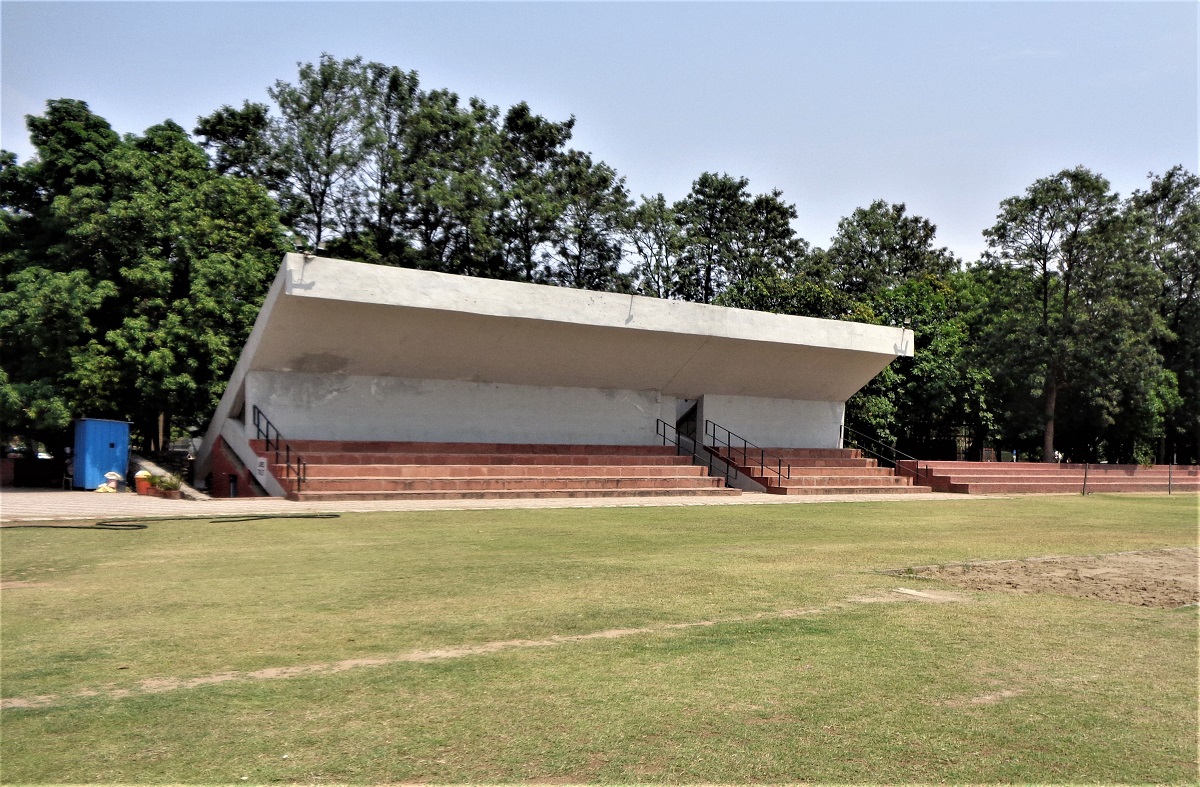 The pavilion emerged out of the grassy ground at the backside and rose upwards at an angle towards the front, that is, the playground side. The simple yet dynamic form of the pavilion with its unadorned concrete surfaces echoes the architectural nuances of Le Corbusier. Its sculptural quality is further accentuated by the vast expanse of green land around it. 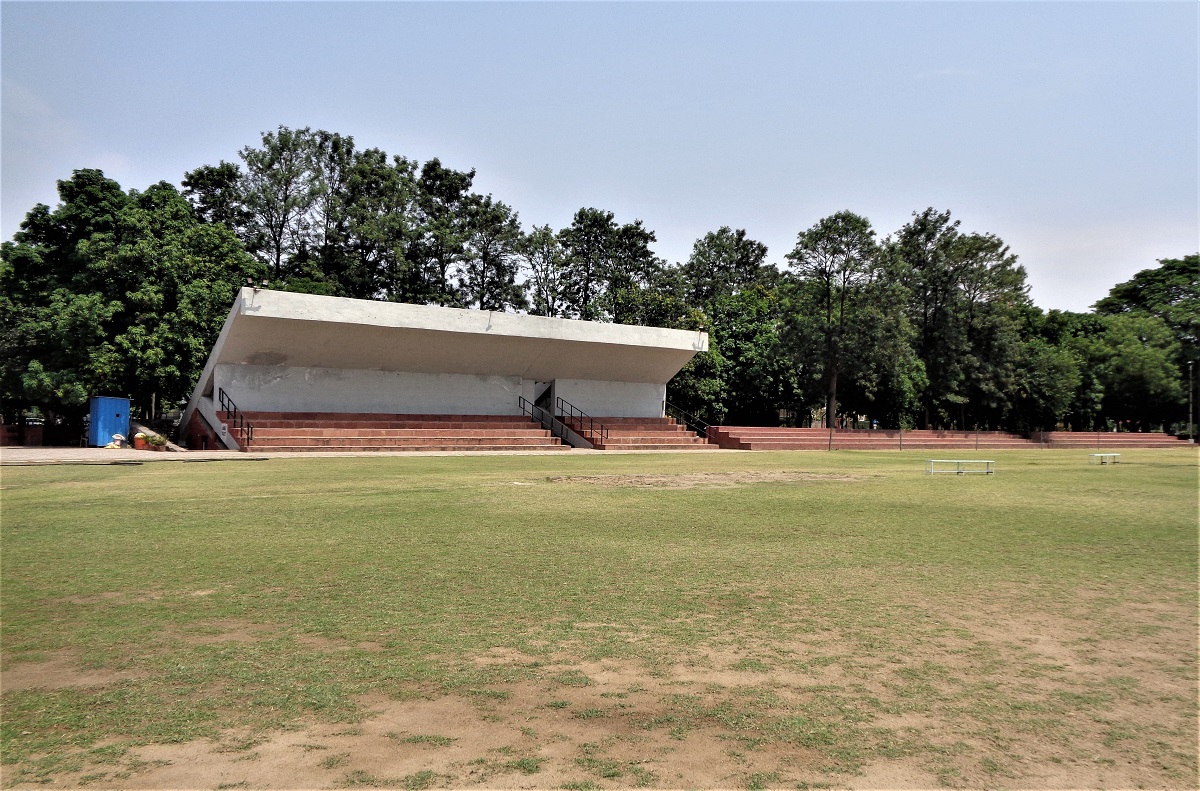 The structural system employed is simply supported, inverted beams with reinforced-concrete slab flushed at the bottom. These beams are embedded firmly in the ground at the rear side of the pavilion. Towards the front, these beams are supported on a linear concrete wall running behind the seating steps and are cantilevered further in a slanting formation to support a free-flowing canopy. 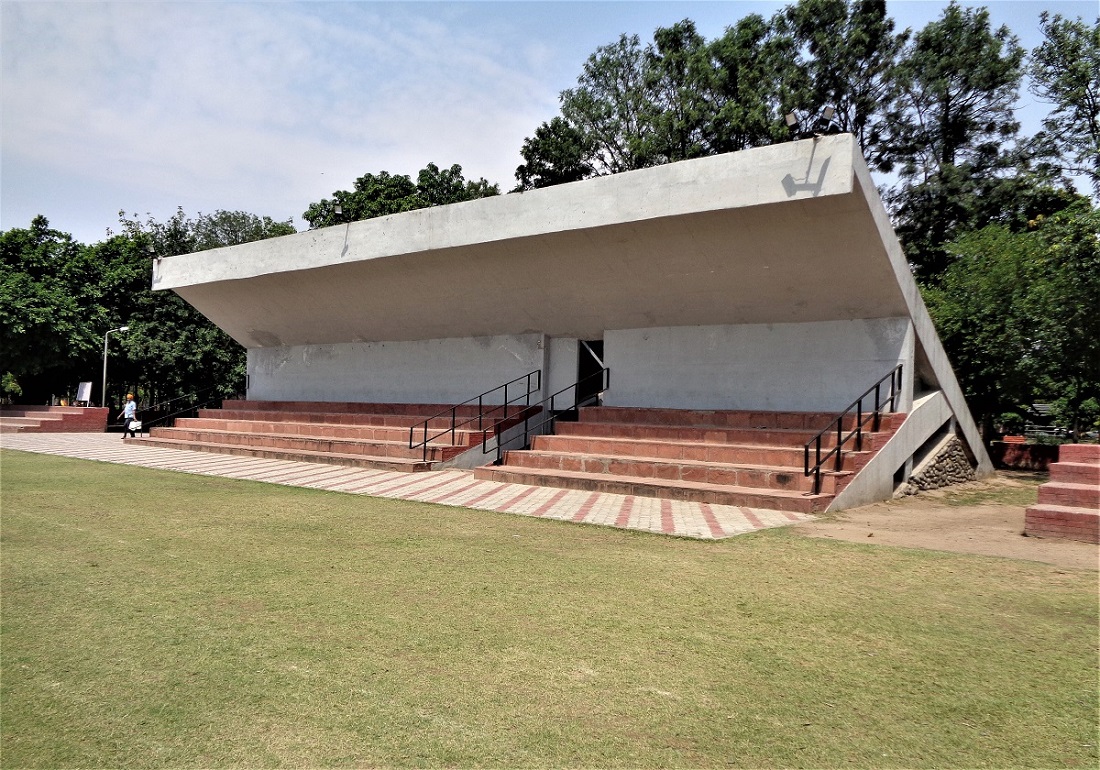 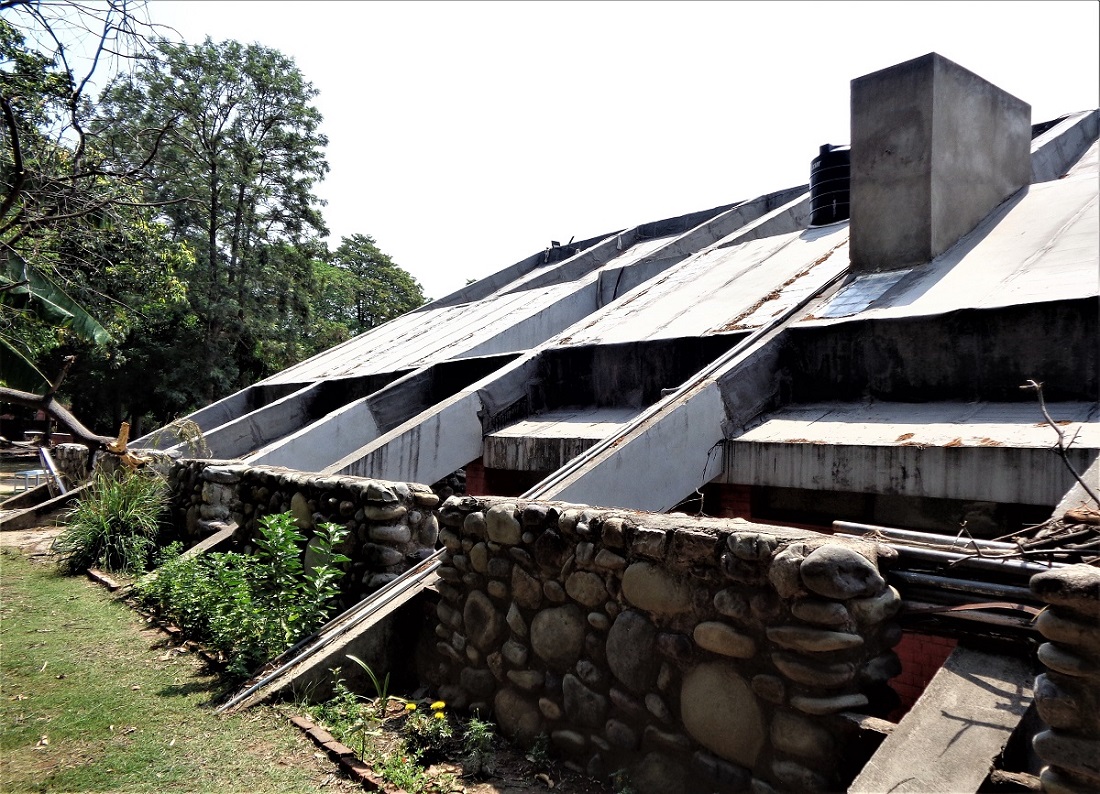 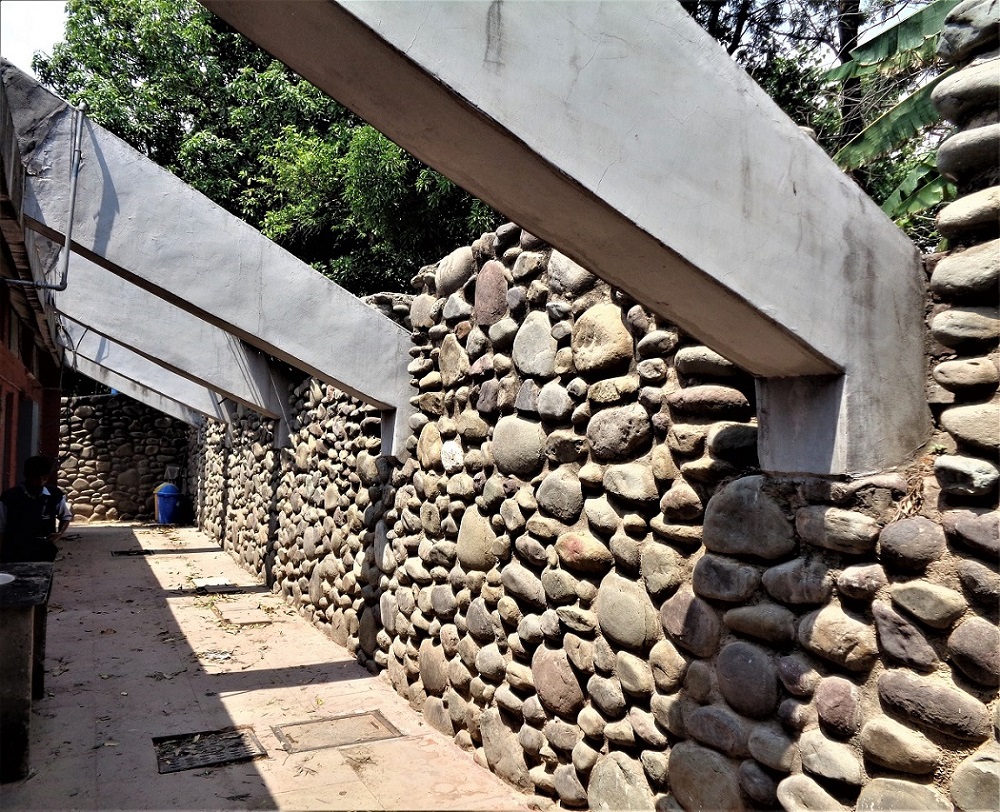 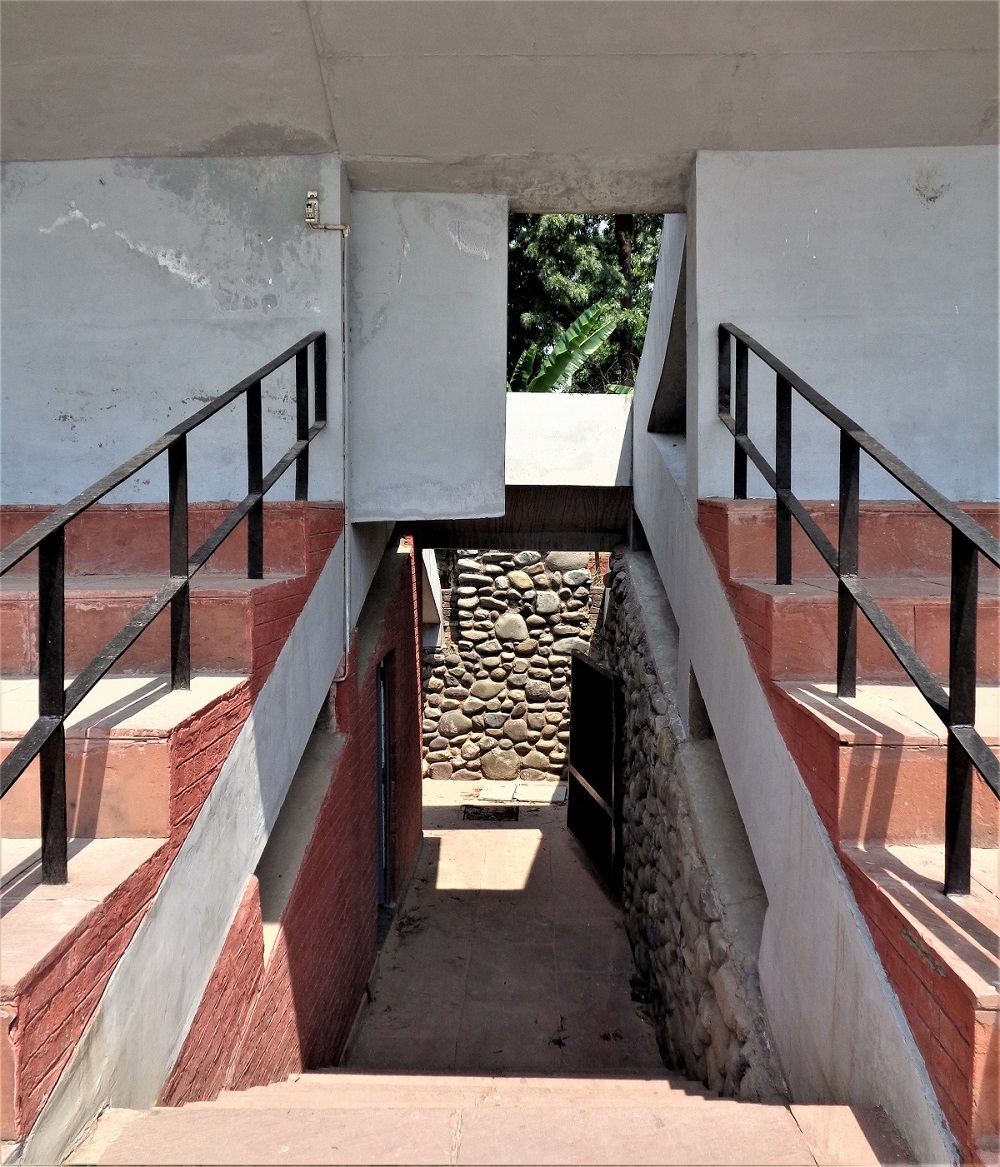 This sunken courtyard has been made accessible through a wide flight of steps at two places that is, in the middle of the pavilion and at the end of the pavilion. Being sunken in the ground, all the secondary facilities are not visible from the playground side thus, do not distract the eye and interfere in the aesthetics of the pavilion. 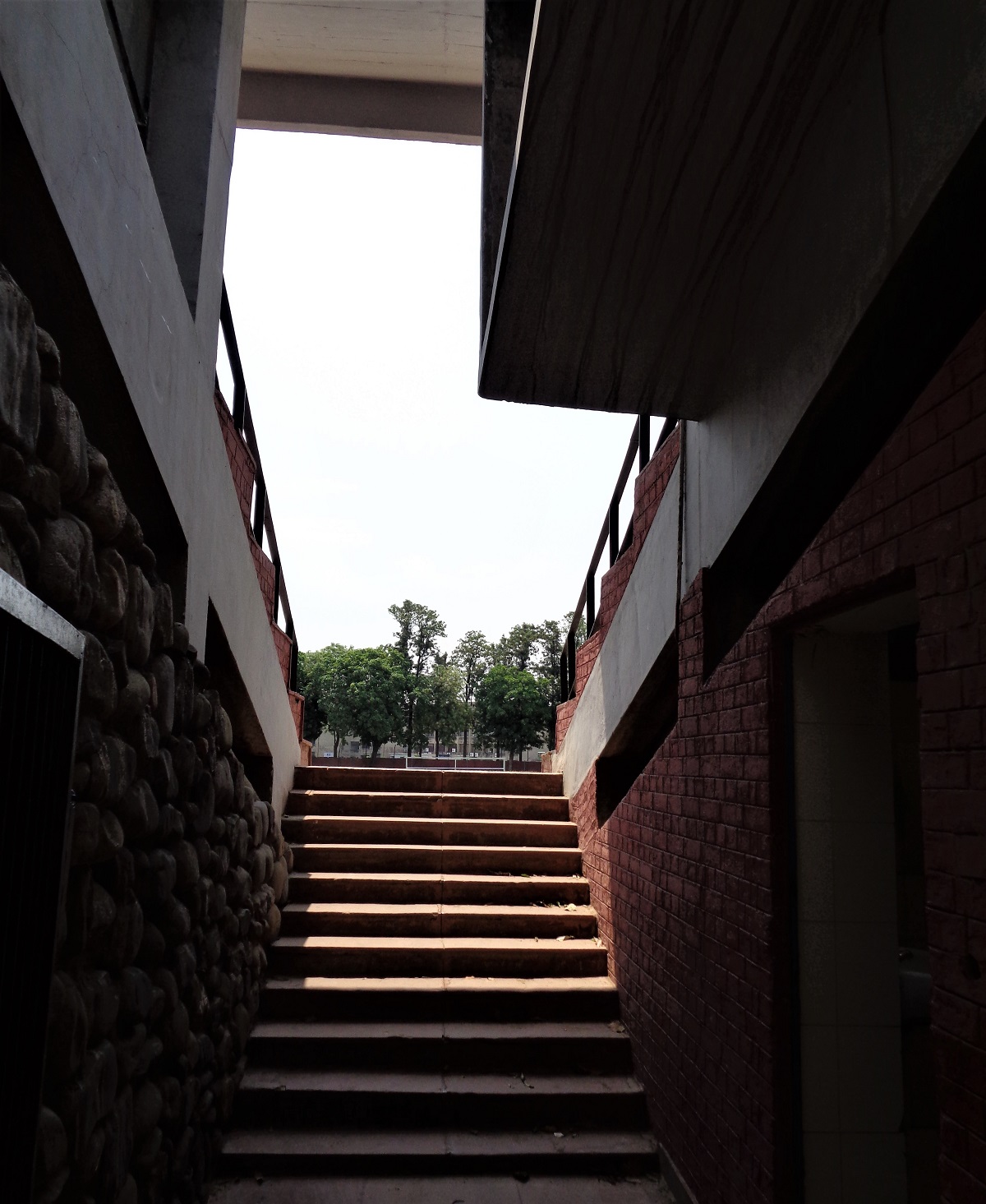 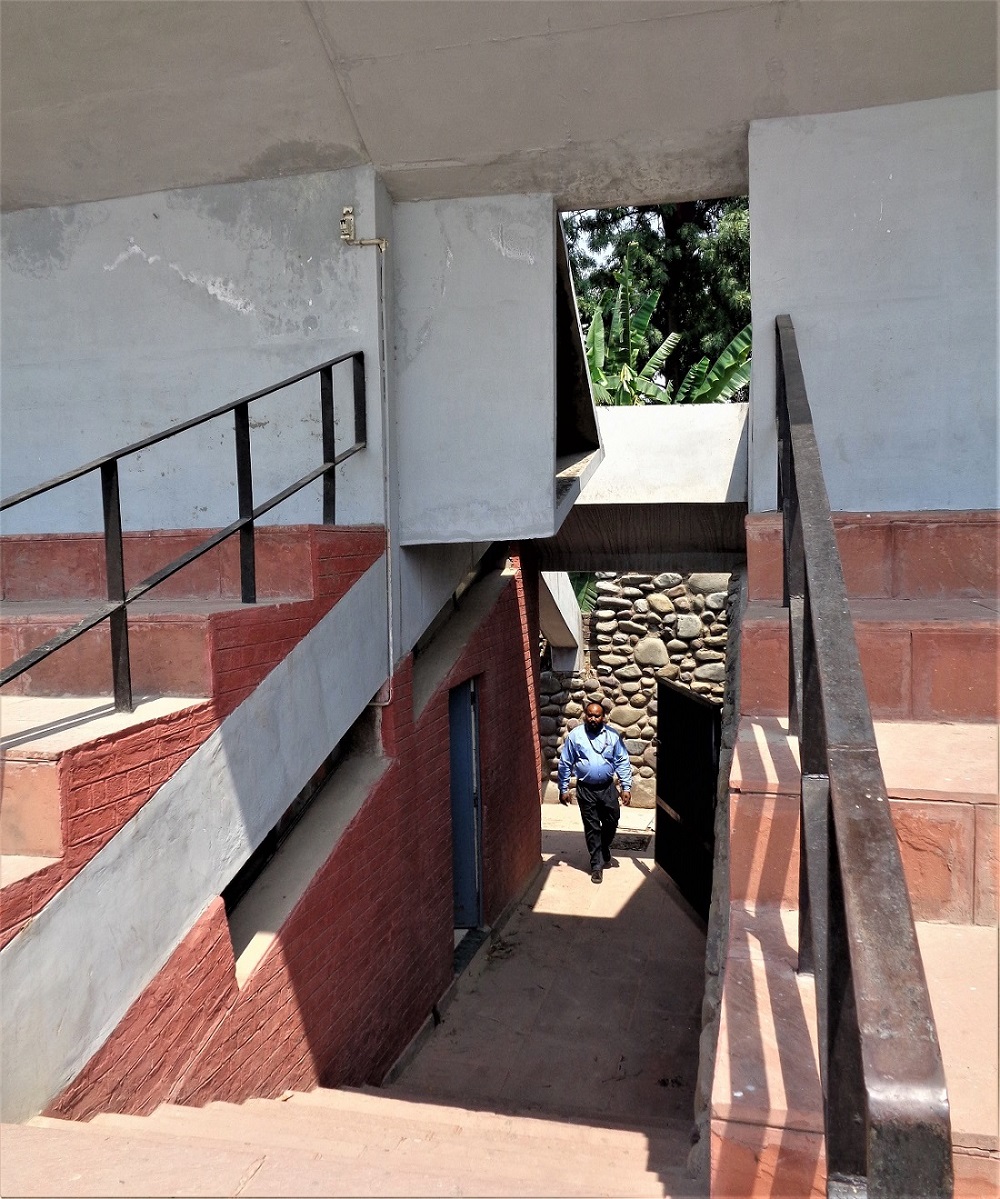 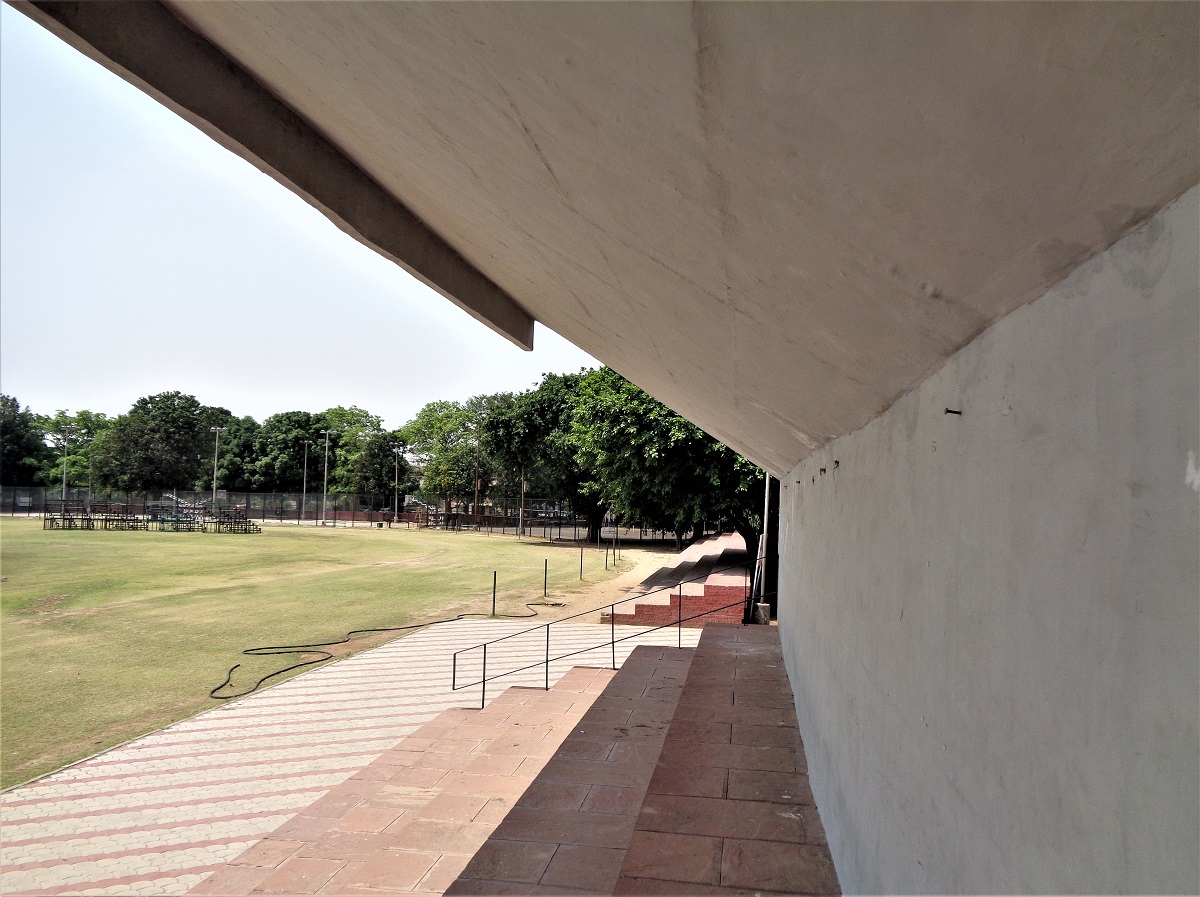 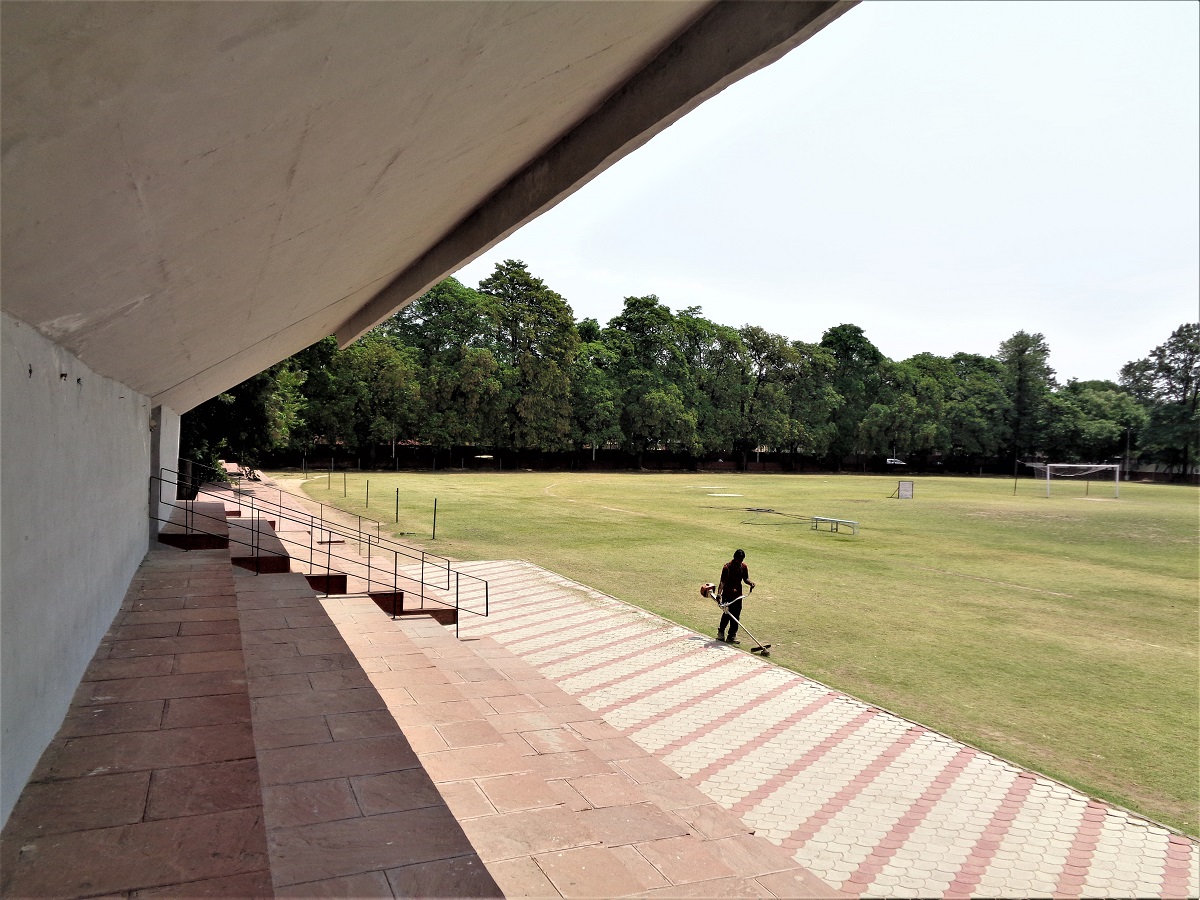 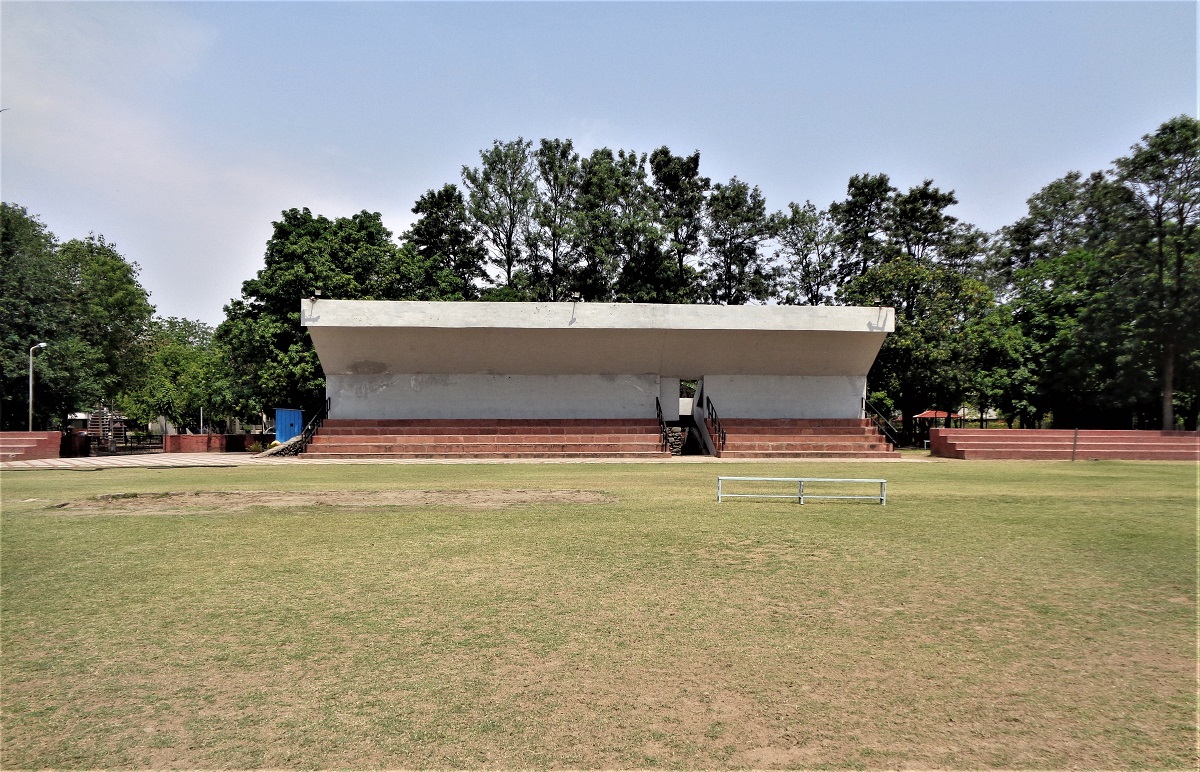 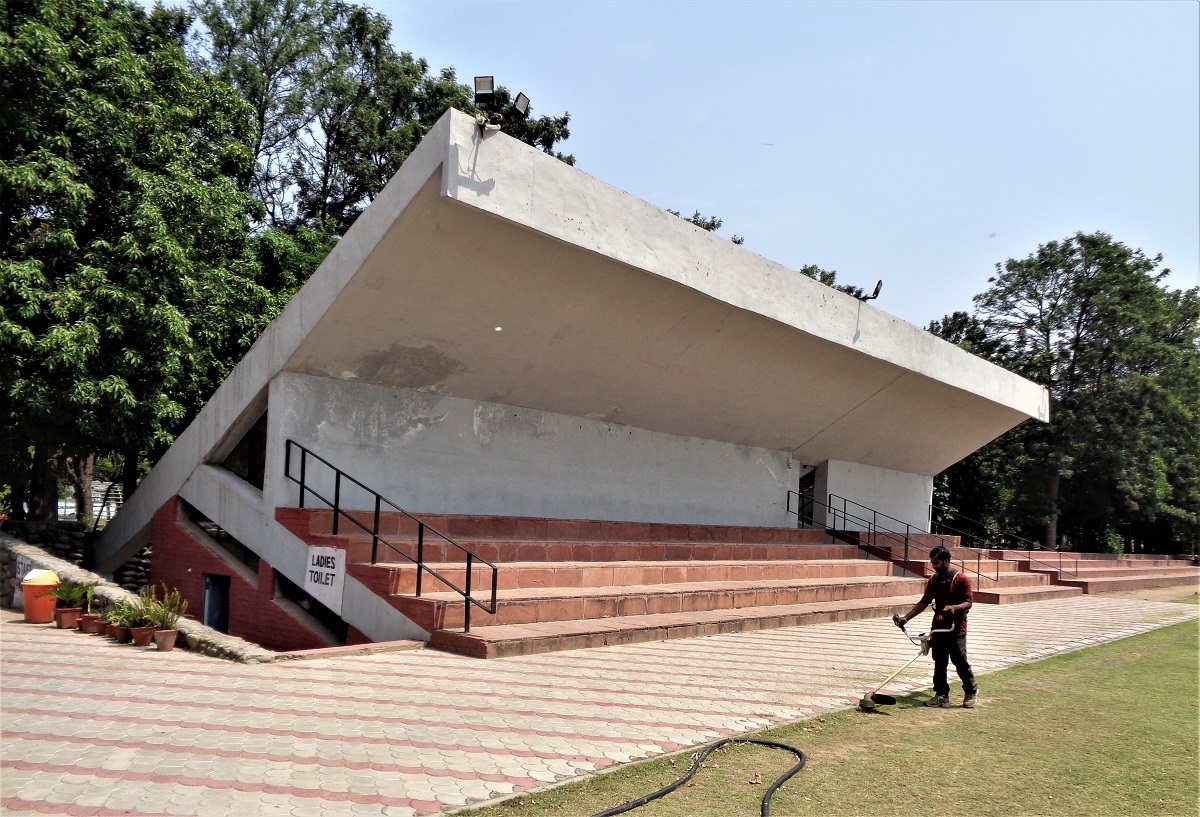 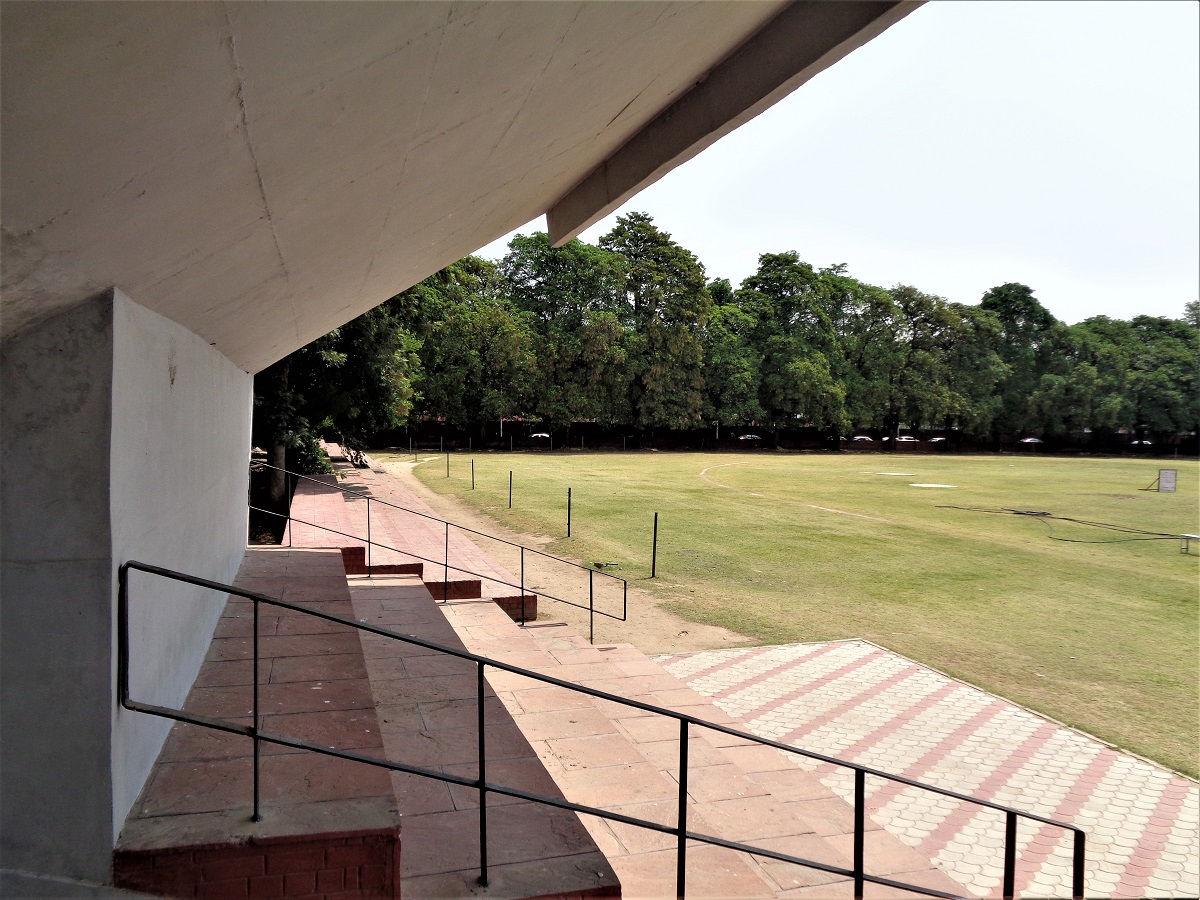