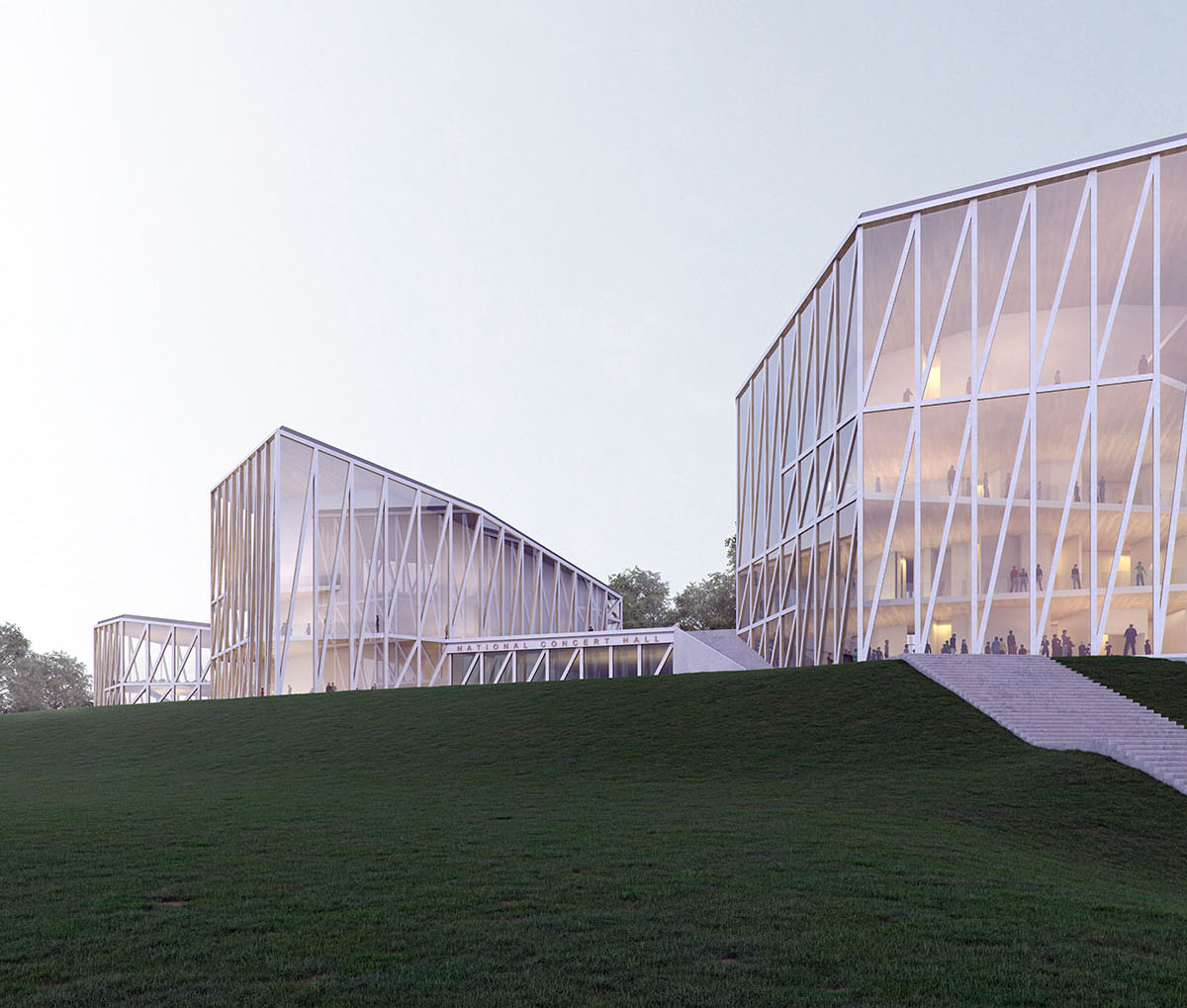 Spanish architecture practice Arquivio Architects has been announced as the winner of the architectural design competition for the National Concert Hall in Vilnius, Lithuania. 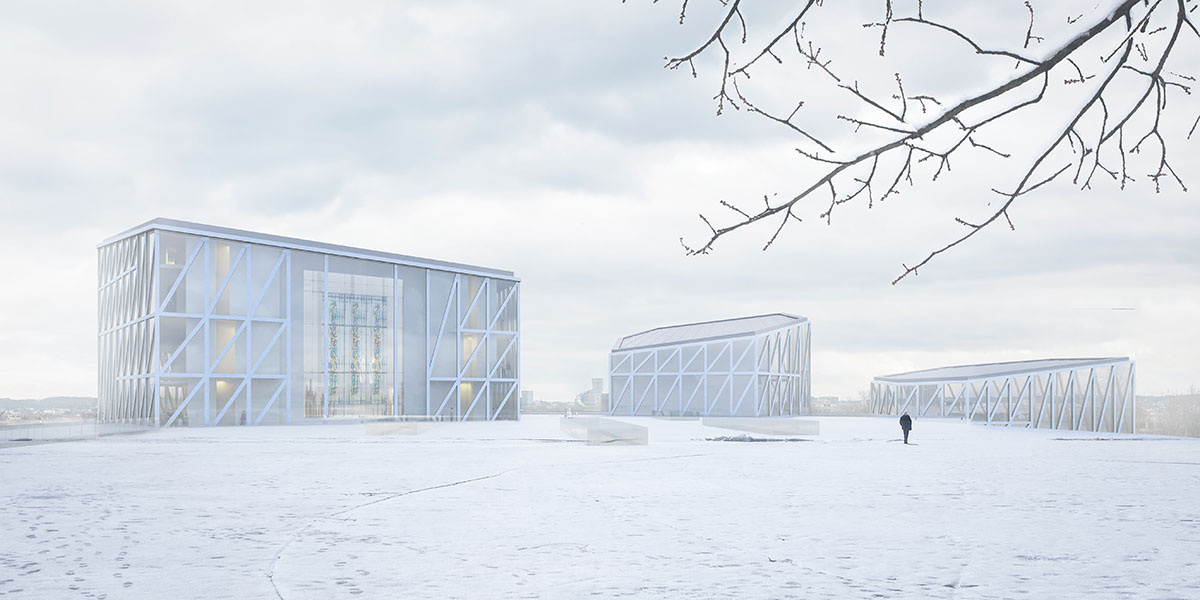 "The concept offered by the Spanish company was to integrate the object into the unique environment surrounding it as naturally as possible," said the competition.

The architects offered building on the Tauras Hill a few separate parts of the building, which would be interconnected by an open ground floor, creating a "green corridor", and setting up a great and a small concert hall in the building. The design also sensitively incorporates the territory of the Lutheran Garden and the park on the Tauras Hill.

The international jury, headed by Norwegian architect Ole Gustavsen (Jury Chair and UIA representative), commended the winning entry by Arquivio Architects (Spain). Jury members noted that "the design of the three volumes and the new plaza provides a clear and fitting intermediate level of detail between the city and the interior spaces." 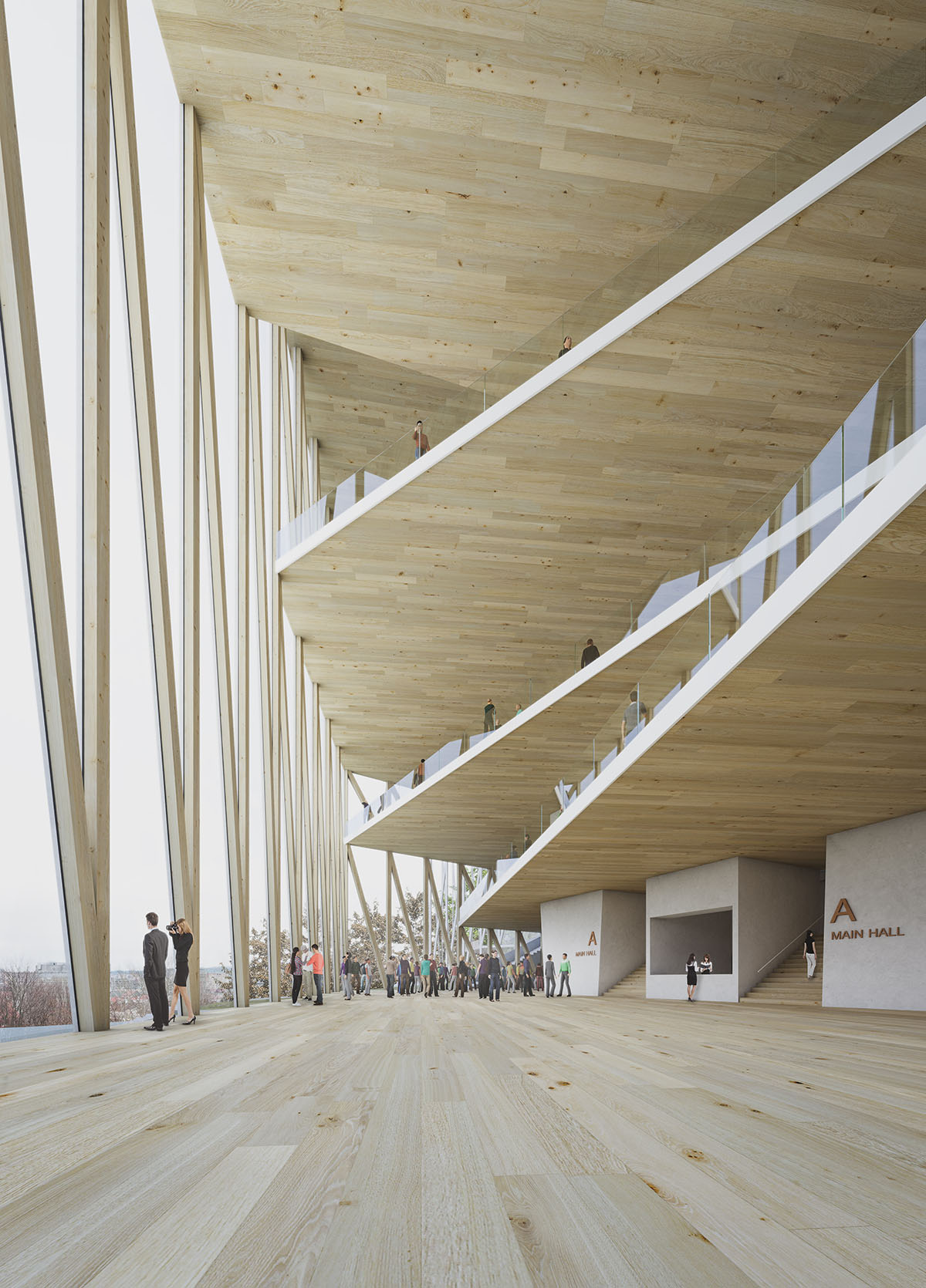 The jury added that the winning entry had proposed a solution ensuring functional communications and acoustic solutions that would satisfy the requirements for an open, multifunctional art centre, featuring a premium classical music concert hall with natural acoustics in which the residing orchestra would feel at home. 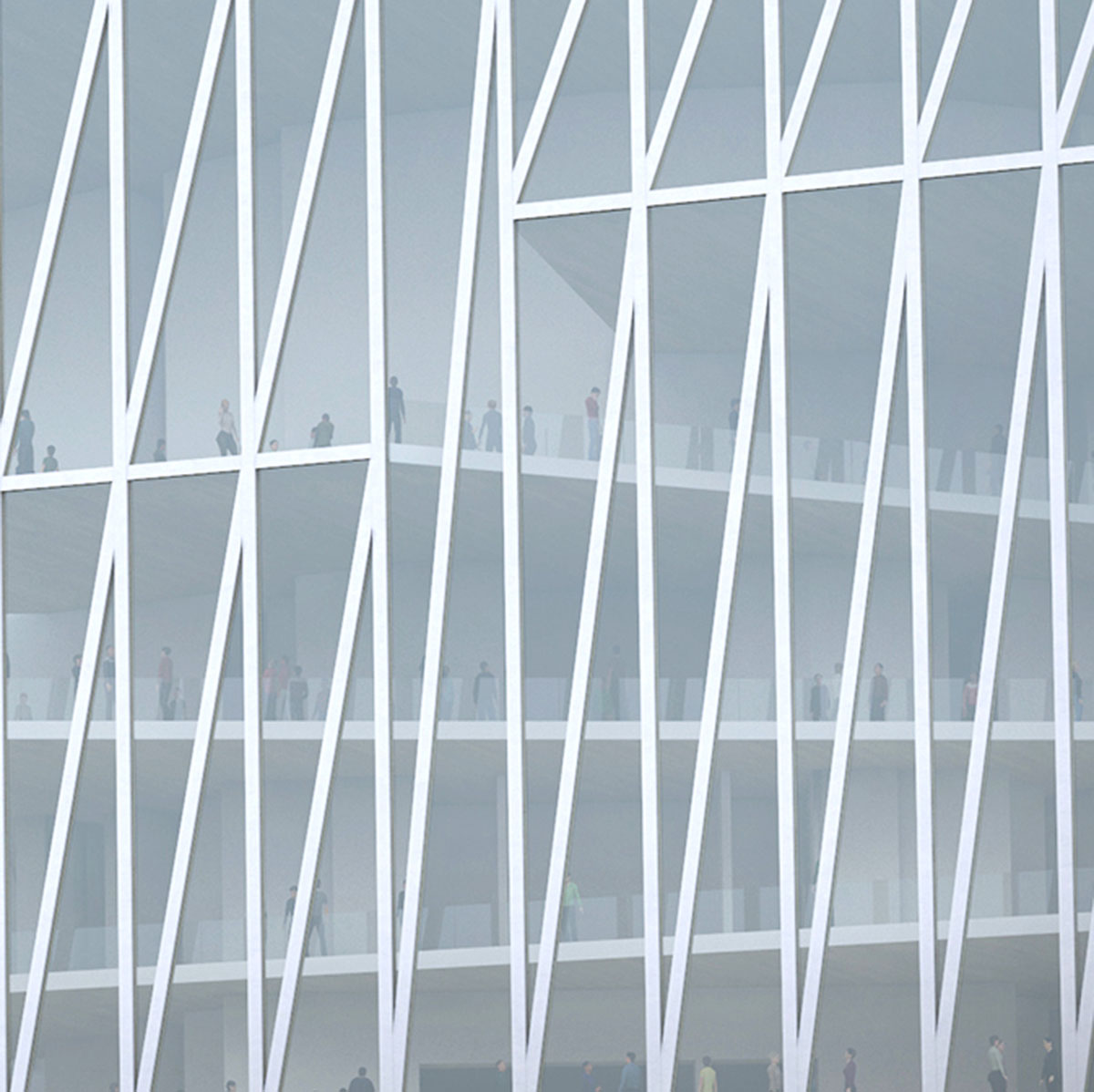 The architects received a prize of EUR 60,000. The international competition received a huge interest, with 248 architectural companies from the US, Japan, Germany, Great Britain, New Zealand, Finland, China, Brazil and other countries participating in it. 21 teams of Lithuanian architects submitted their works for the competition. 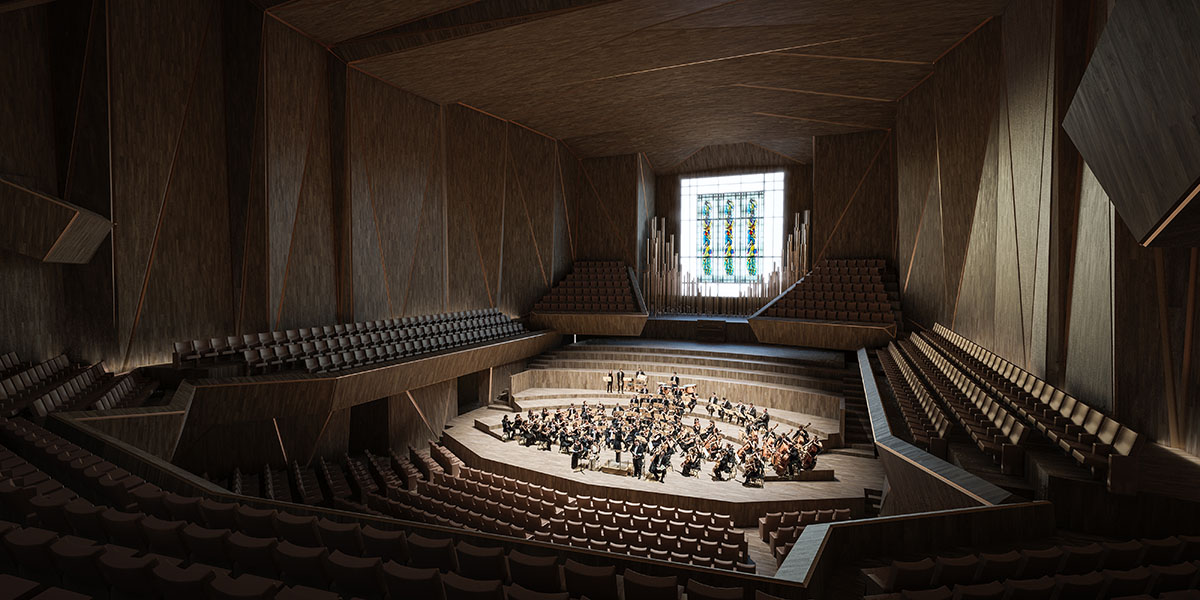 The winners of the first three places from Spain, France and Lithuania attended the solemn awards ceremony held in T Park, Vilnius; leaders of the country and the city, members of the Seimas, representatives of architectural and cultural communities visited the exhibition of all the competing ideas. 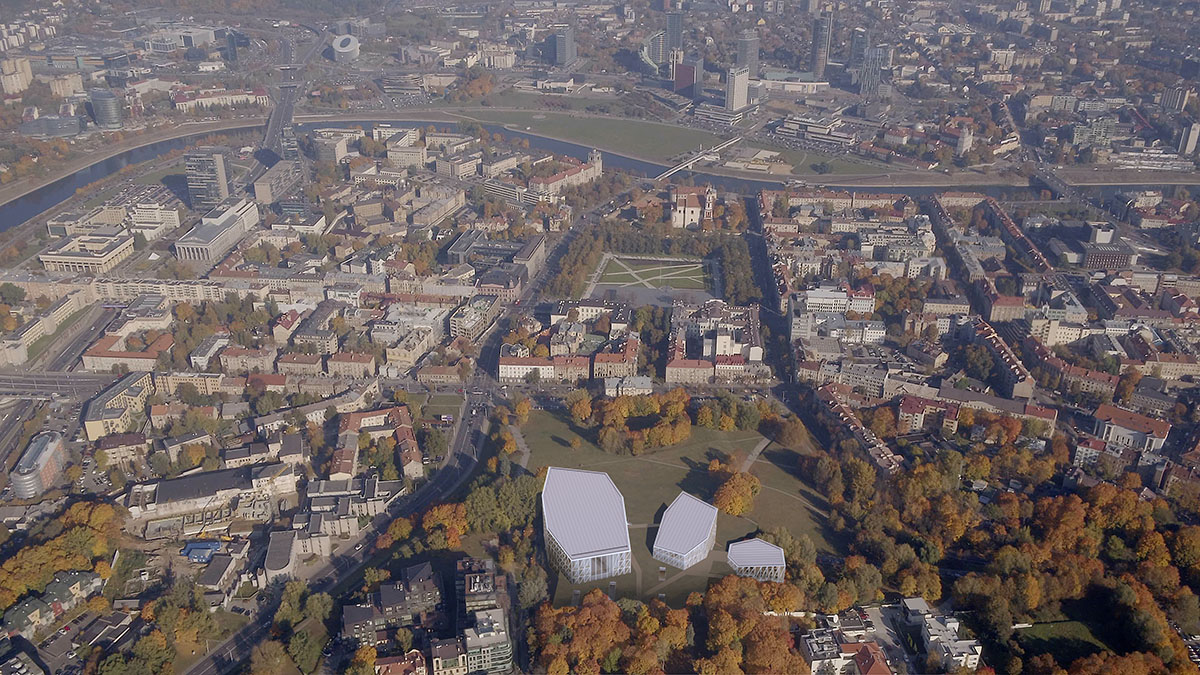 "The idea of the Home of Nation envisioned by the creators of our state 100 years ago, is becoming the reality step by step. Embodying the Home of Nation today allows perceiving this palace as a link between the year 1918 and the Republic of today as the embodiment and evolution of continuity. I would very much like to see the Home as an inviting place open to everyone, a place of harmony for people of different generations, views and tastes, bringing together Lithuanian citizens into a single creative space where we could create our own Home of Nation together," said Mindaugas Kvietkauskas, the Minister of Culture of the Republic of Lithuania.

"I believe that the selected architecture of the building is unique, memorable, inspiring and will become a new sign of the city – sounding, inspiring and reflective of the era. The National Concert Hall the "Home of Nation" is one of the most important cultural objects planned for us all in the capital. After more than 100 years, all of us will implement the idea of the patriarchs of our nation. There will be spectacular, world-renowned cultural events held in the hall, and this space can become the focal point of European culture," said the Mayor Remigijus Šimašius.

The winning team Arquivio Architects has 10 creators. Non-published negotiation for a design service agreement will be held with the winners, negotiating the price of design of the National Concert Hall and the duration of the design process. The plan is to have an agreement for the technical design of the hall signed with the winner of the competition as soon as this year. 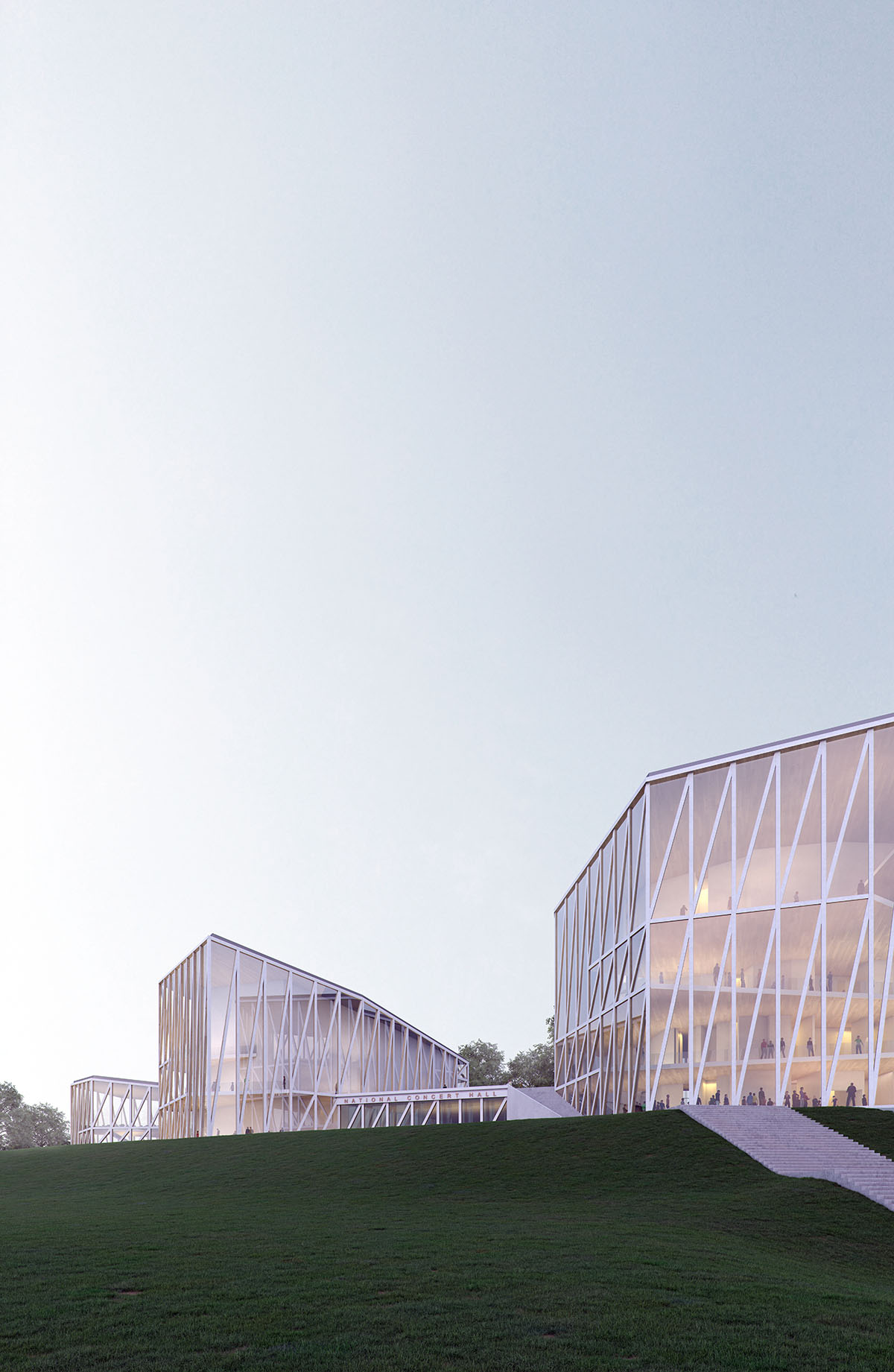 "The only constraint in competitions like this is we ourselves as professionals. We take a very responsible look at the entire process, the purpose, the expectations and desires, the deadlines, the correlation of the created model with the city and its environment, its integration into the landscape," said said Daniel Fraile, the representative of the winner of the best architectural idea Arquivio Architects. 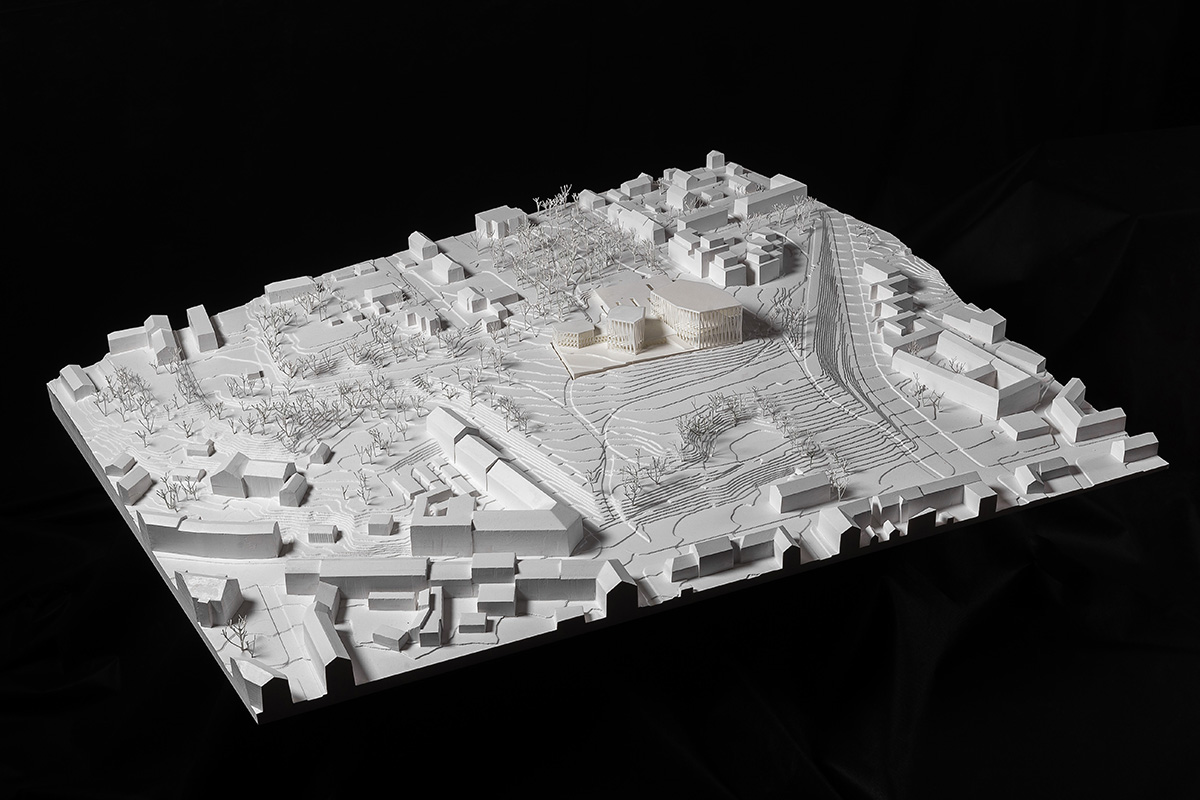 "You know, our work is like basketball – it requires a lot of quality work, a lot of skills and success. Let this achievement be our gift to the city of Vilnius and the entire country," added Daniel Fraile.

According to the terms of the competition, the new building will have a great hall with up to 1,700 seats and a small hall seating 500 people, also cafes, a spacious lobby overlooking a spectacular skyline of the city and facilities for a variety of other cultural activities. The estimated budget for the concert hall design service and construction works is 52 million euros. This amount includes all costs relating to the design, construction, installation of the object, and the arrangement of the land plot around it. 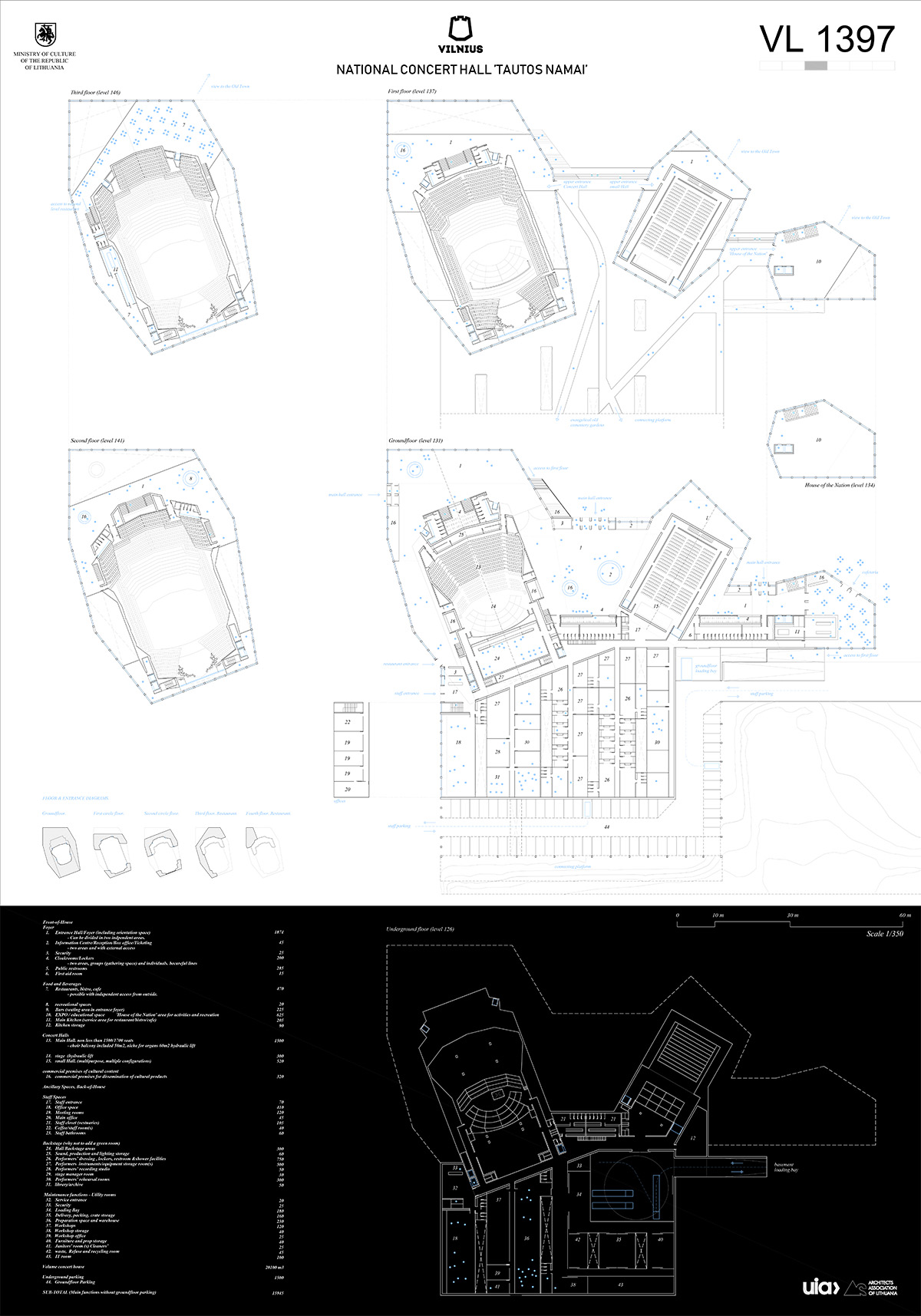 The building of the former Trade Union Palace built on the Tauras Hill 56 years ago will soon be demolished. The municipality will arrange access to the Concert Hall and the adjacent territory of the Lutheran Gardens, the Vilnius Evangelical Old Cemetery Complex. The total value of landscaping projects, including EU support, is about 14 million euros. 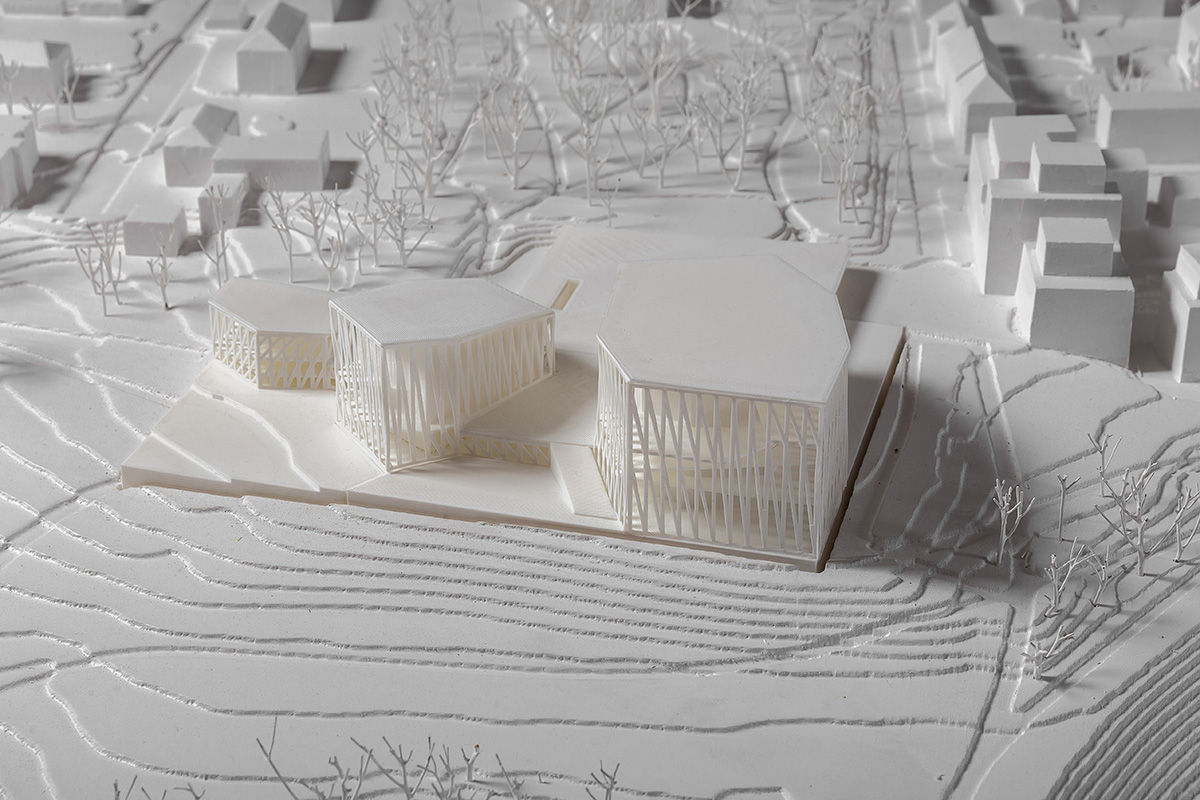 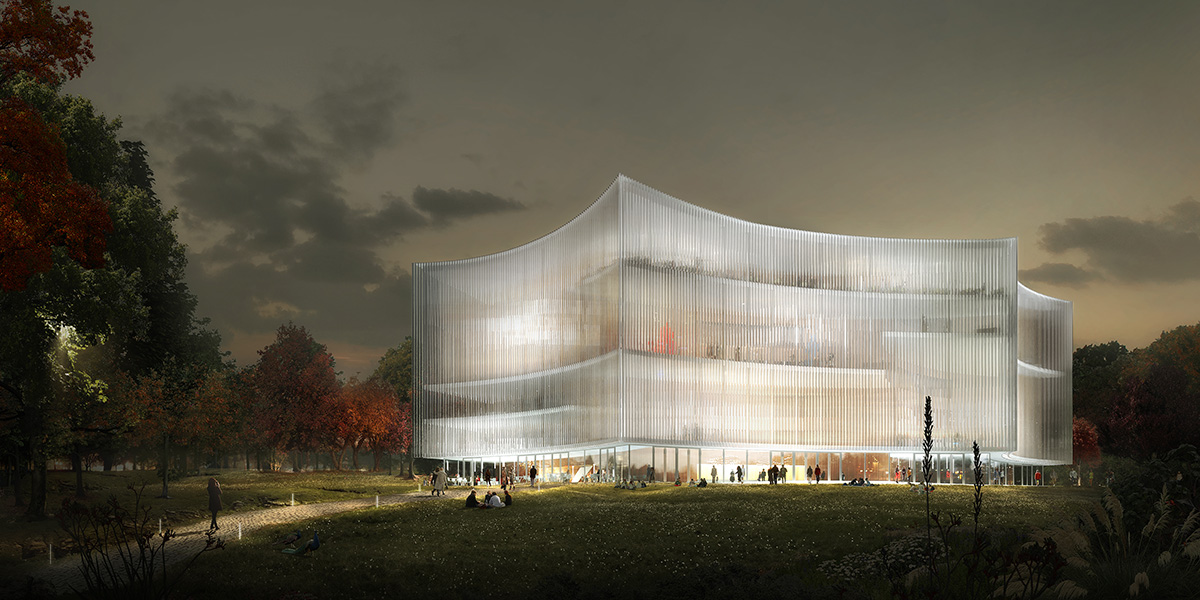 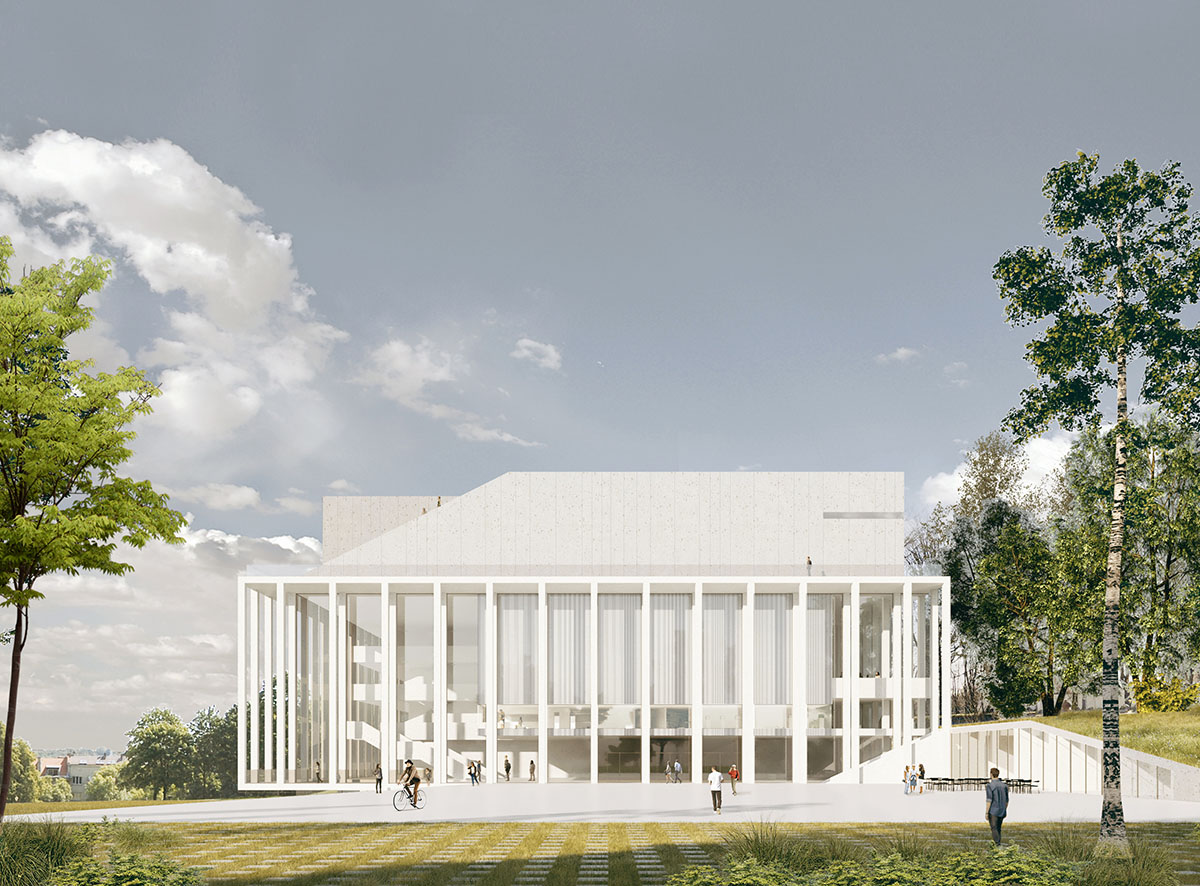 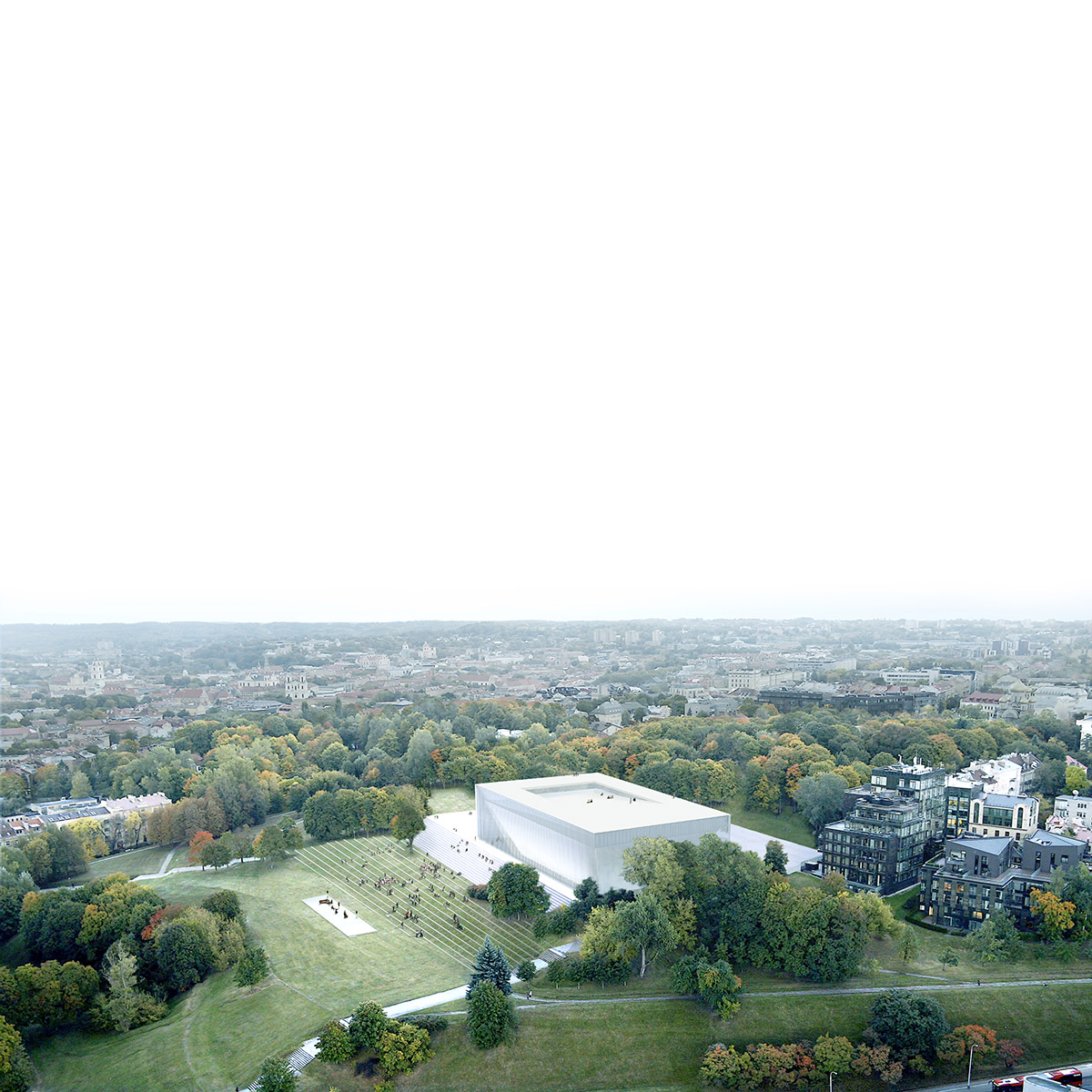 Residents and guests of Vilnius are invited to see all 248 architectural ideas for the National Concert Hall at the exhibition opened up in T Park (Pelesos g. 1), from the 20th of September till the 13th of October, Monday through Friday noon to 8 p.m. and on weekends 10 a.m. to 5 p.m

> via National Concert Hall in Vilnius