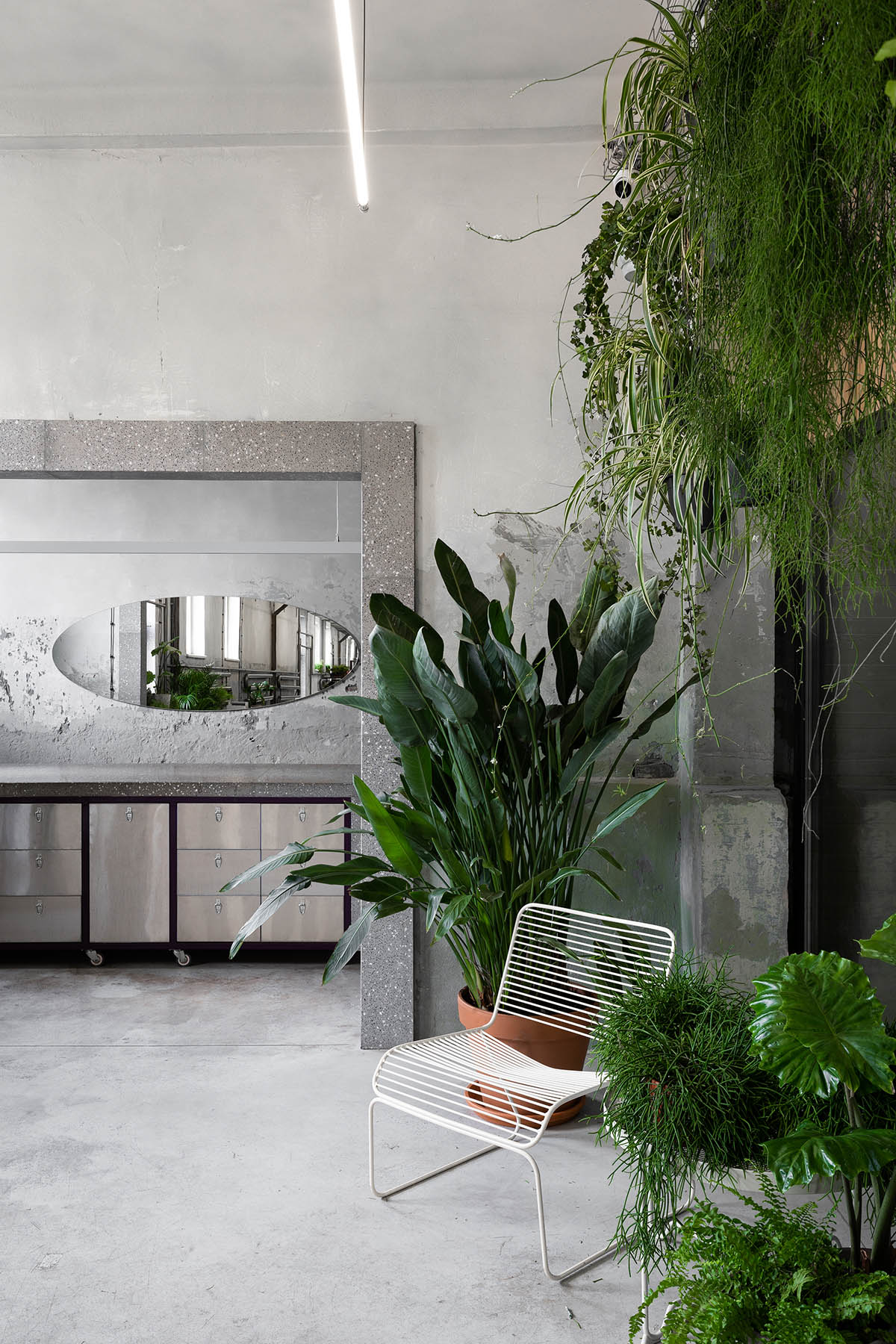 The client Dicentra briefed Rina Lovko Studio for constructing two florist refrigerators in the warehouse room, in addition to converting it into a retail space. The warehouse was a soviet era construction, held by Dicentra. 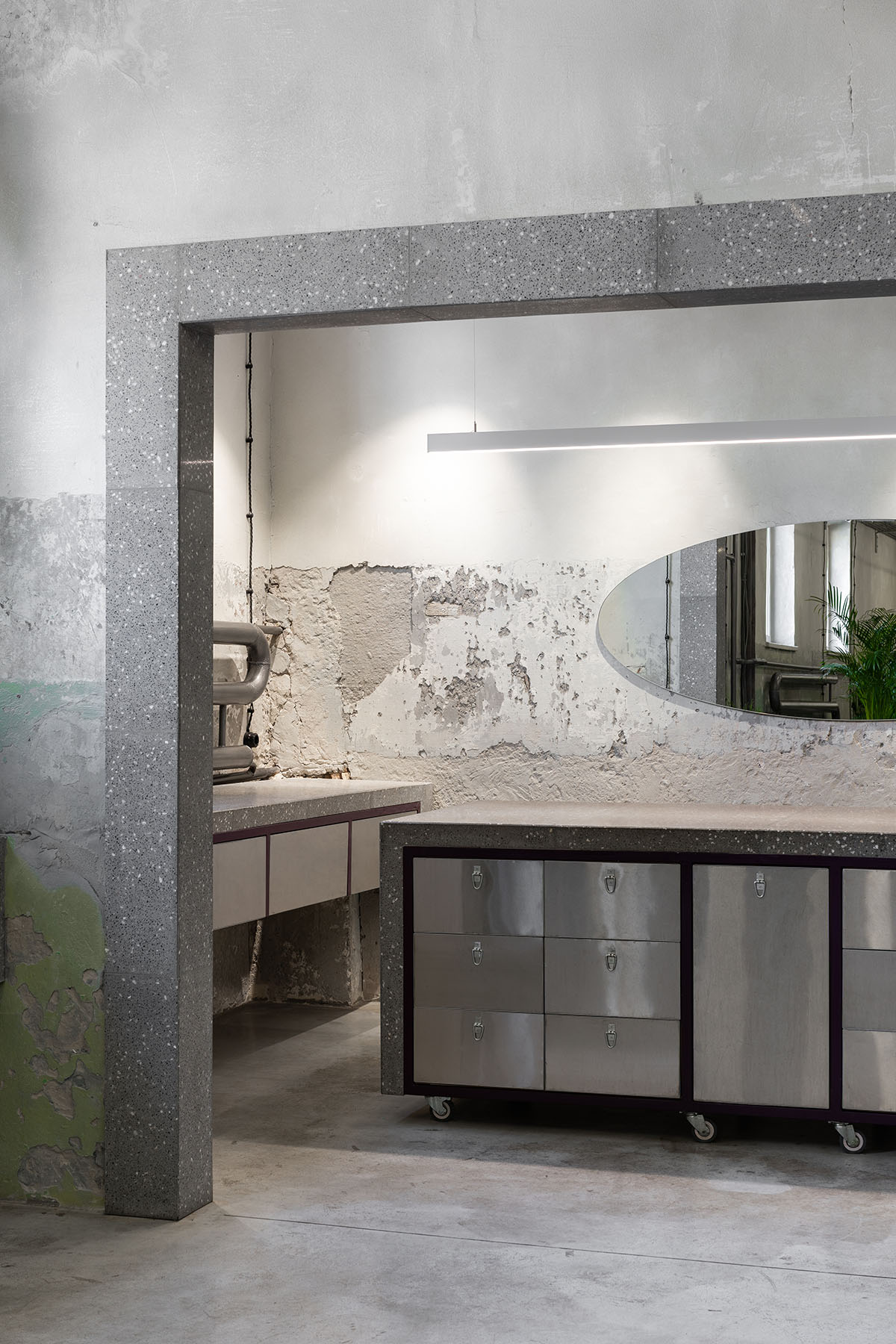 The first is a fridge showcase with cut flowers for retail. The second is closed for cut and potted plants wholesale. The hall needed a reception for managers, a workplace for florists, utility rooms with a kitchen, and a shared toilet for guests and staff. 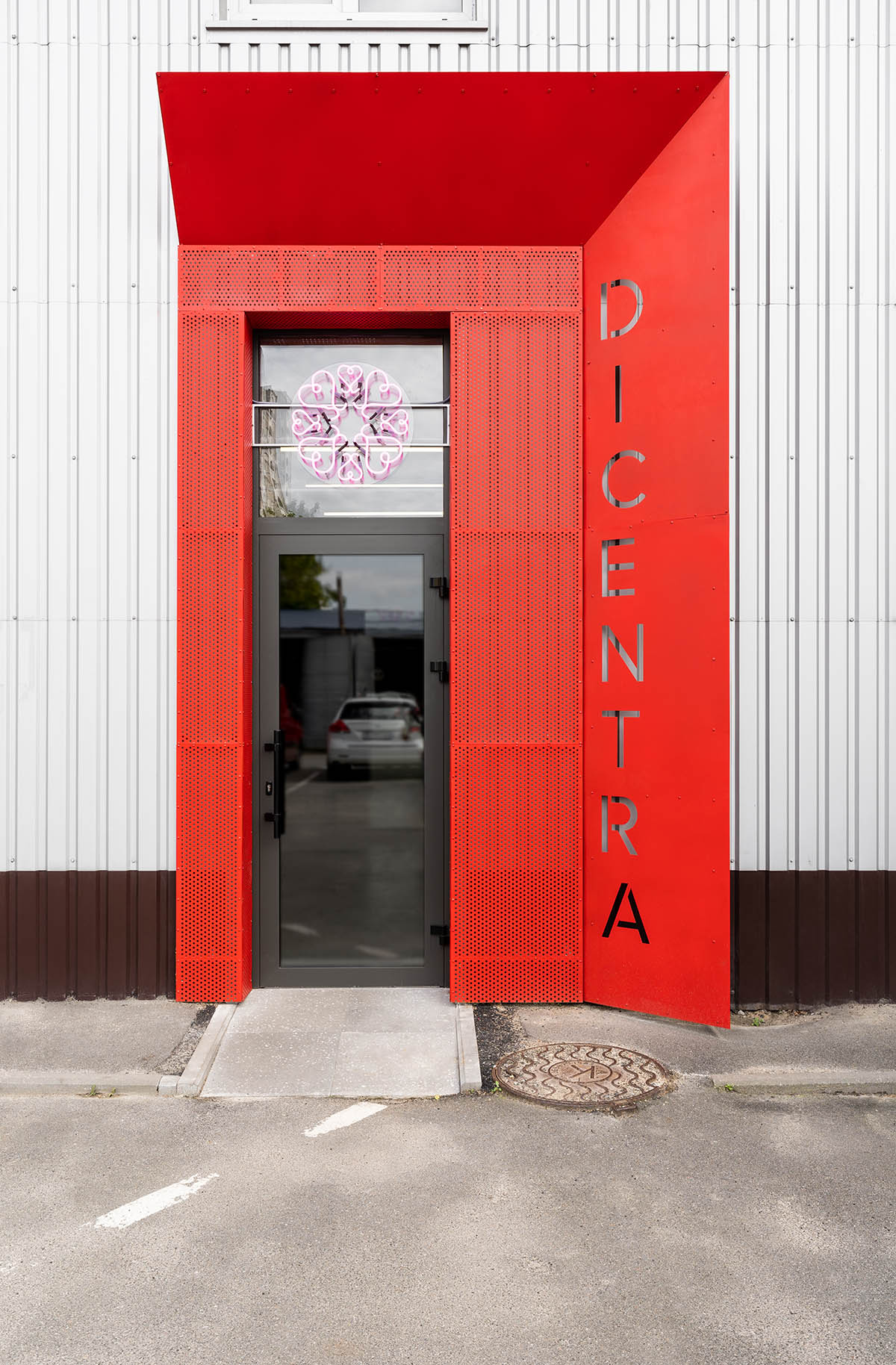 The warehouse was similar to a hangar with 300 meters of open space without partitions. Previously, it was a Soviet era workshop on the left bank of Kiev. 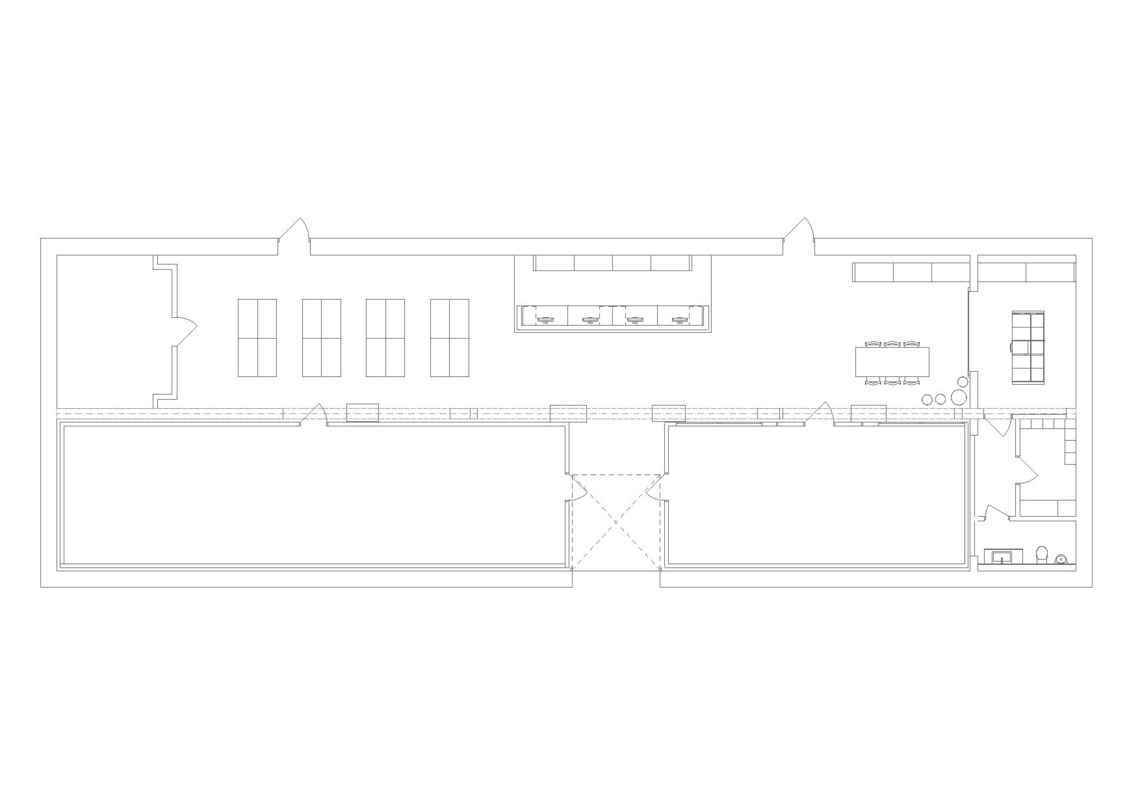 “A limited budget, large area and tight deadlines posed challenging conditions which demanded non-standard solutions. The room is divided simply with two walls, and the columns are in the middle. The floor was of asphalt, and hence we decided to make them technical – fill it with concrete”, says RIna Lovko Studio. 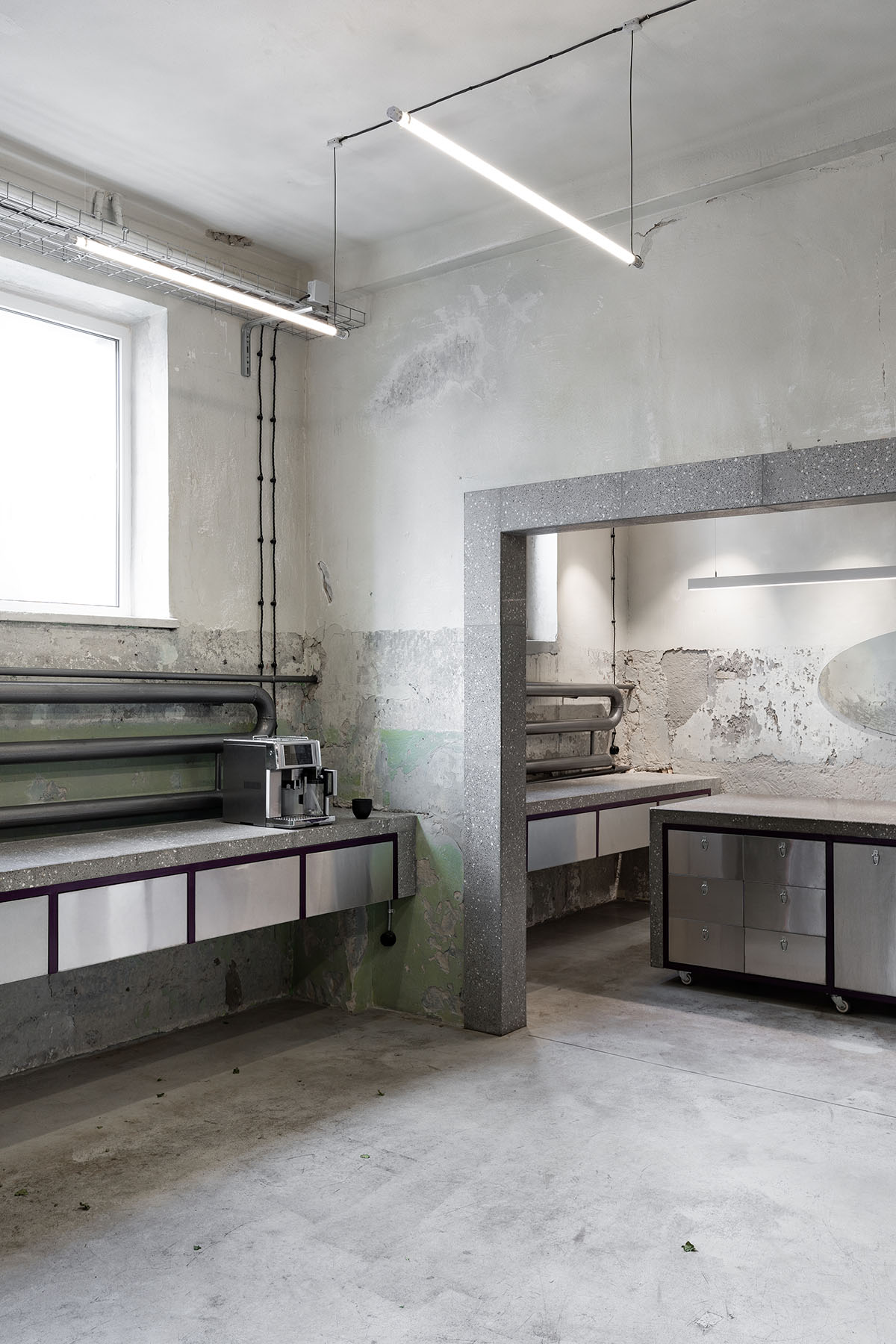 “There top of the walls were whitewashed, and the bottom was green oil-painted. The existing paint was removed along with the plaster, and then the artist covered them with a primer and a glaze layer. The walls came out textured, which put together a general picture. The idea was to make everything look untouched-as if we had came in, put down furniture and the store started working”, says Rina Lovko Studio. 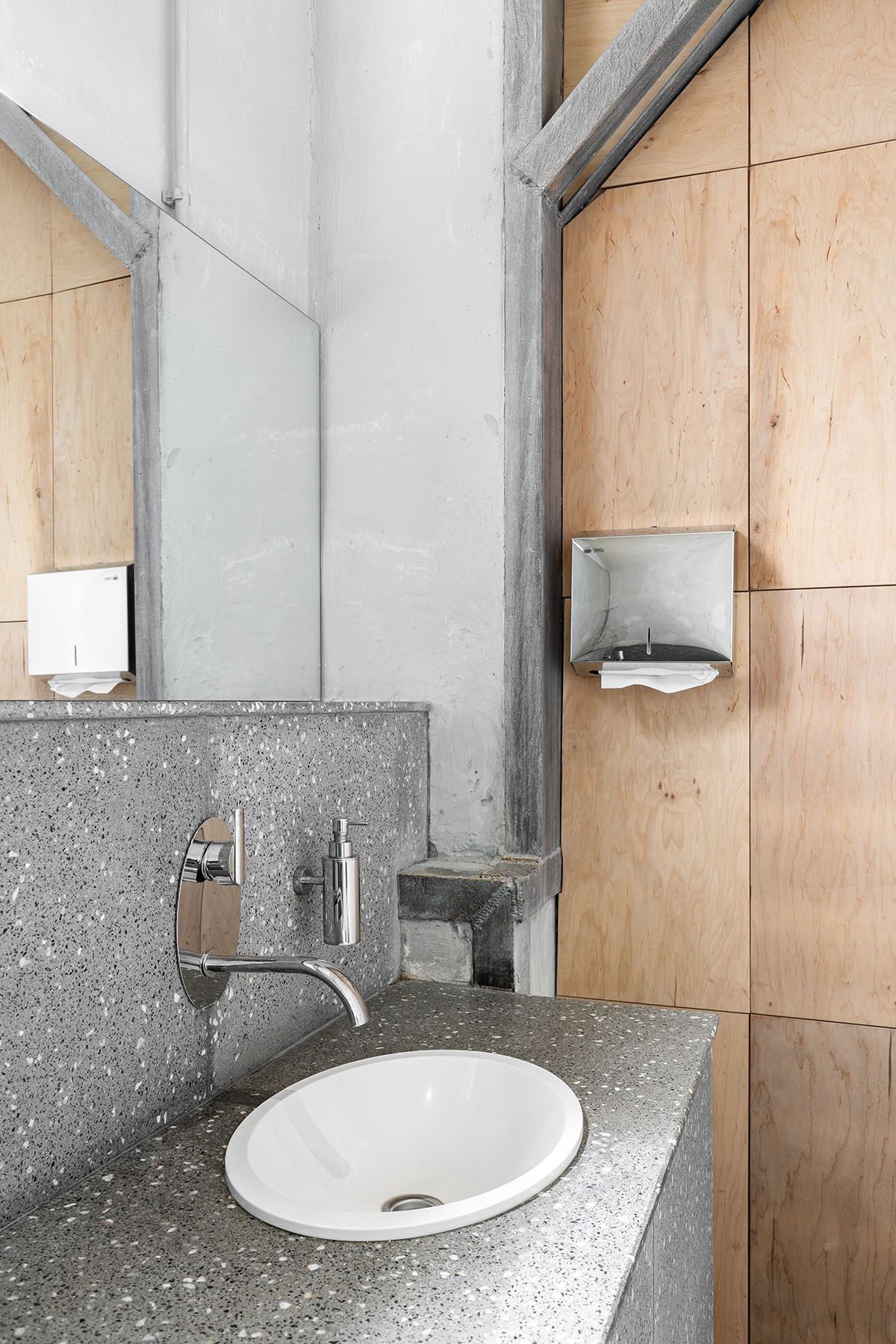 “We had to make the refrigerators smaller in size to fit in, for which they were made of special thermal materials. For the display refrigerator, we made an aluminum sliding door window for the face, with motion sensors. For the other refrigerator full aluminum was chosen so that the cold is kept. They were faced with standard plywood sheets”, Says Rina Lovko  Studio. 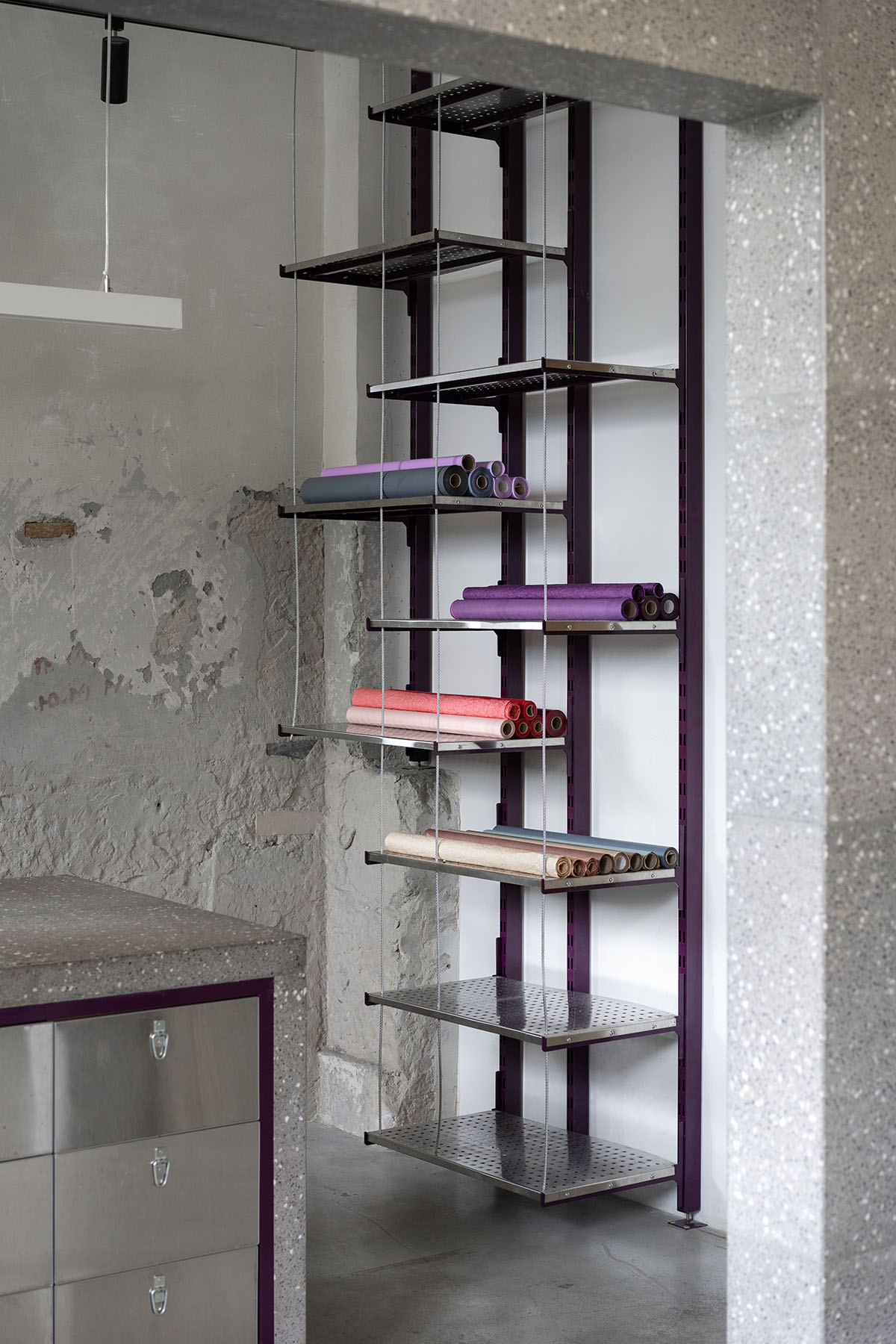 “In general, the space looks like a large hangar, in which two smaller cubes were inserted. Between the cooler cubes there is a raceway for large unloading trolleys. On the contrary there is a wide reception for four people”, says Rina Lovko Studio. 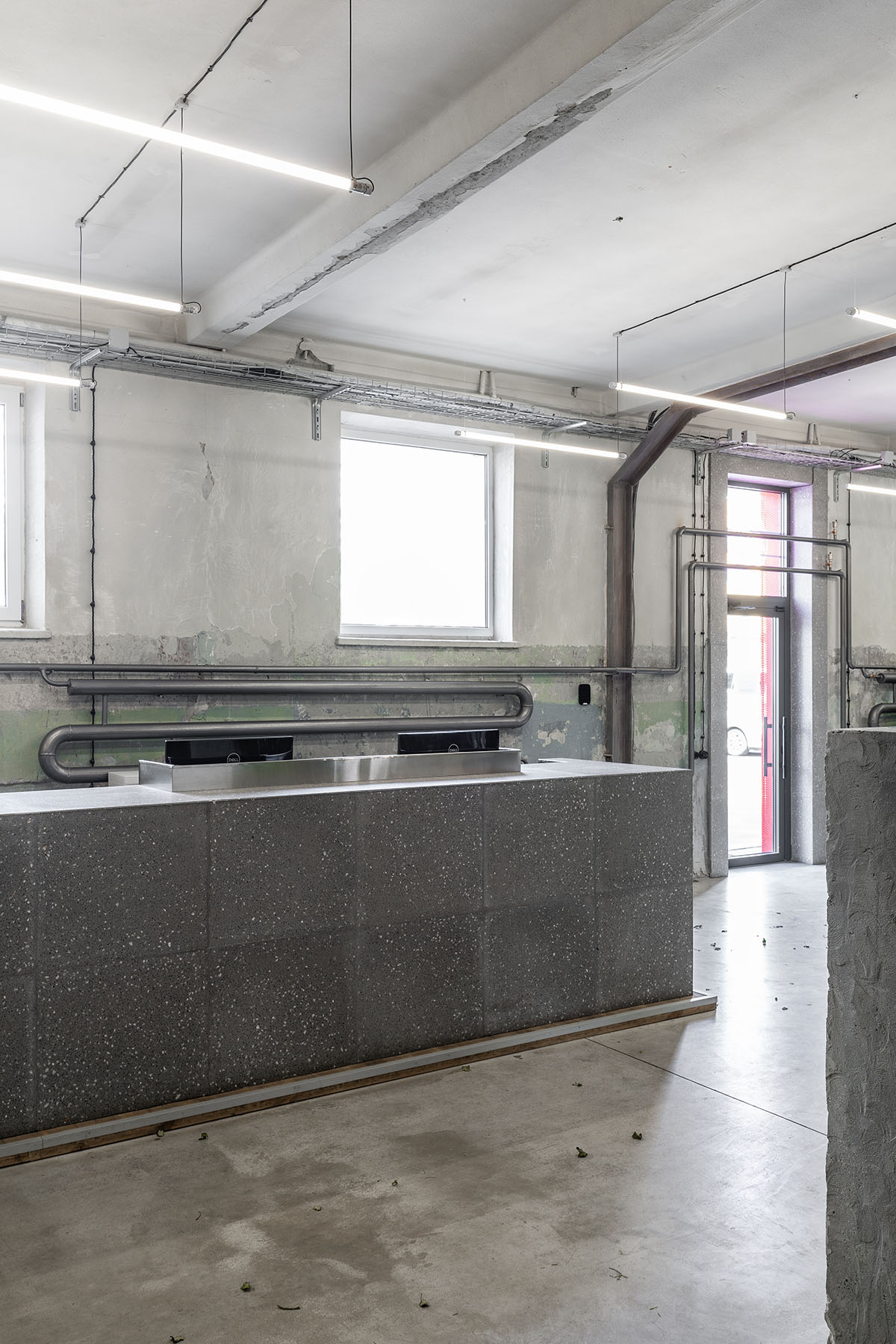 “Inside, the refrigerators are painted with graphite color. The decision is to make the product attractive by placing flowers on a black background to look bright and contrasting, thereby helping the sales. We supported this idea with specially selected lighting such that the flowers looked even brighter”, says Studio Rina Lovko. 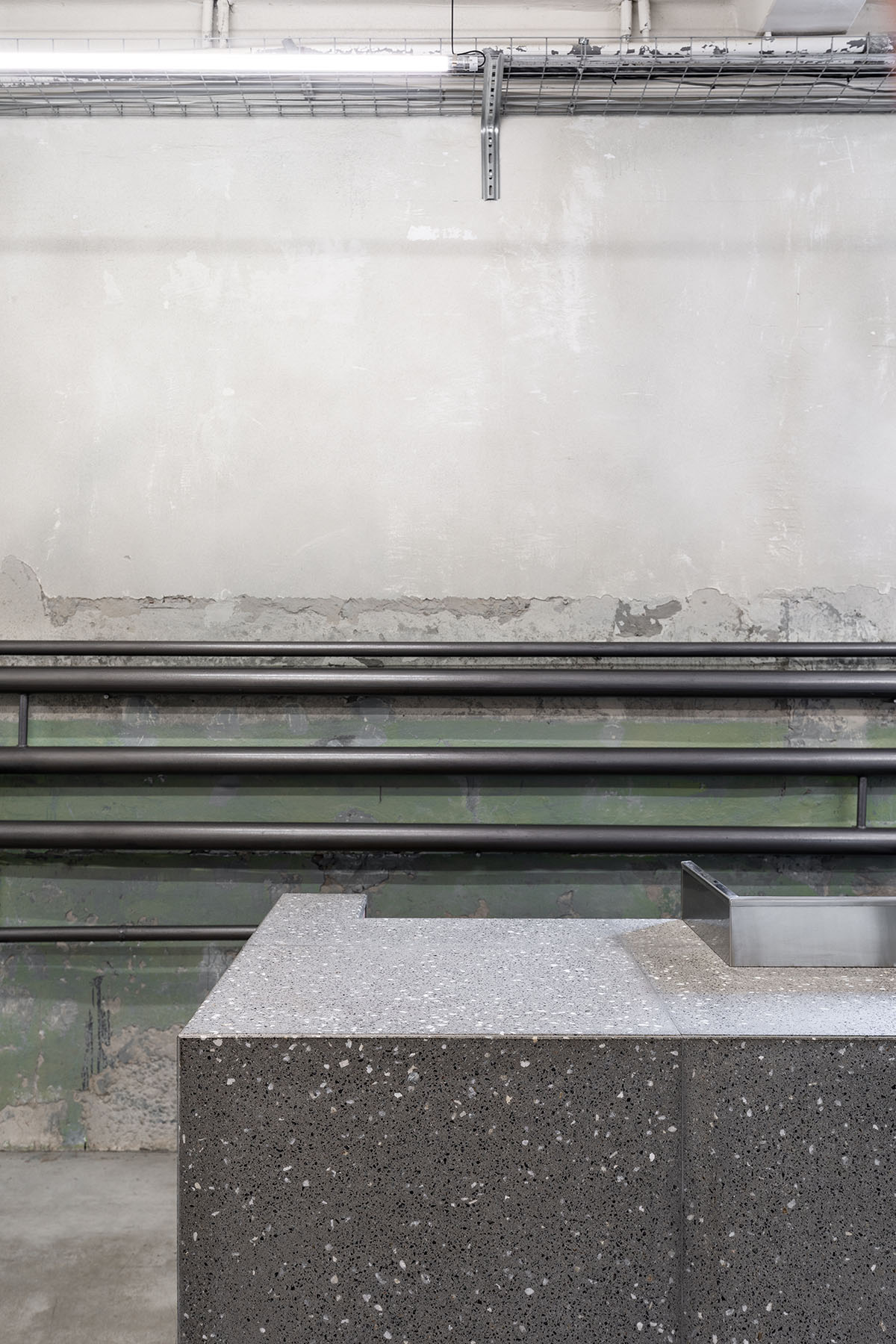 “The general lighting in the hall was made simple - these are LED tubes hanging from the ceiling, each on a separate wire. The wiring is without breaking the walls and putting the cables into trays. Light and arrangement of furniture emphasized the length of the hangar. All furniture is made of stainless steel and is lined with gray terazzo plates made to order”, says Studio Rina Lovko. 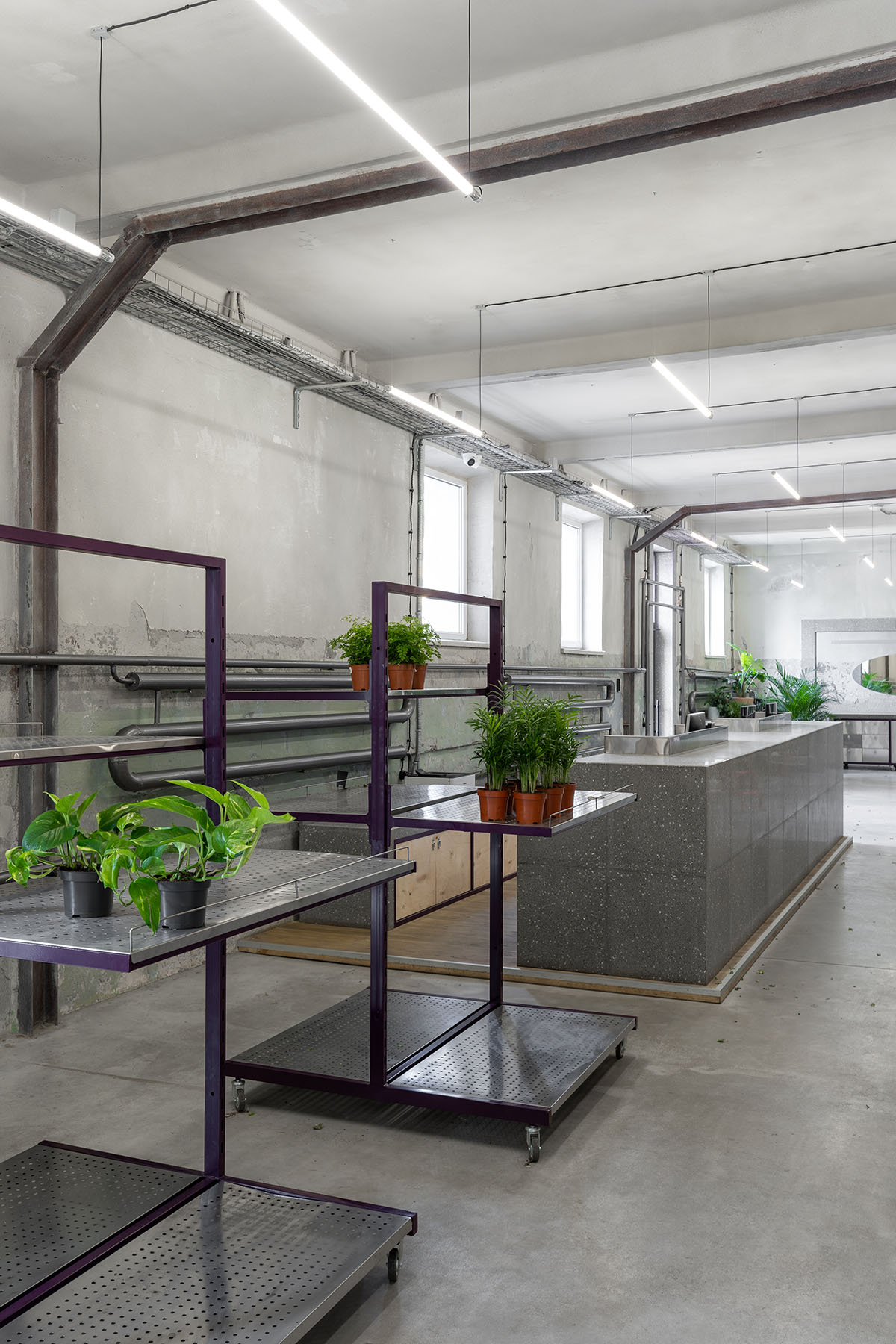 An unexpected item appeared on list of tasks– the office for managers-which challenged to set into the design. The solution was to make the office completely mirrored and place it in the warehouse room like a third cube. Its edges would not reach the walls, so as not to hurt the communications. The mirror hence visually increased the space and appeared like the long hangar became increased in area. 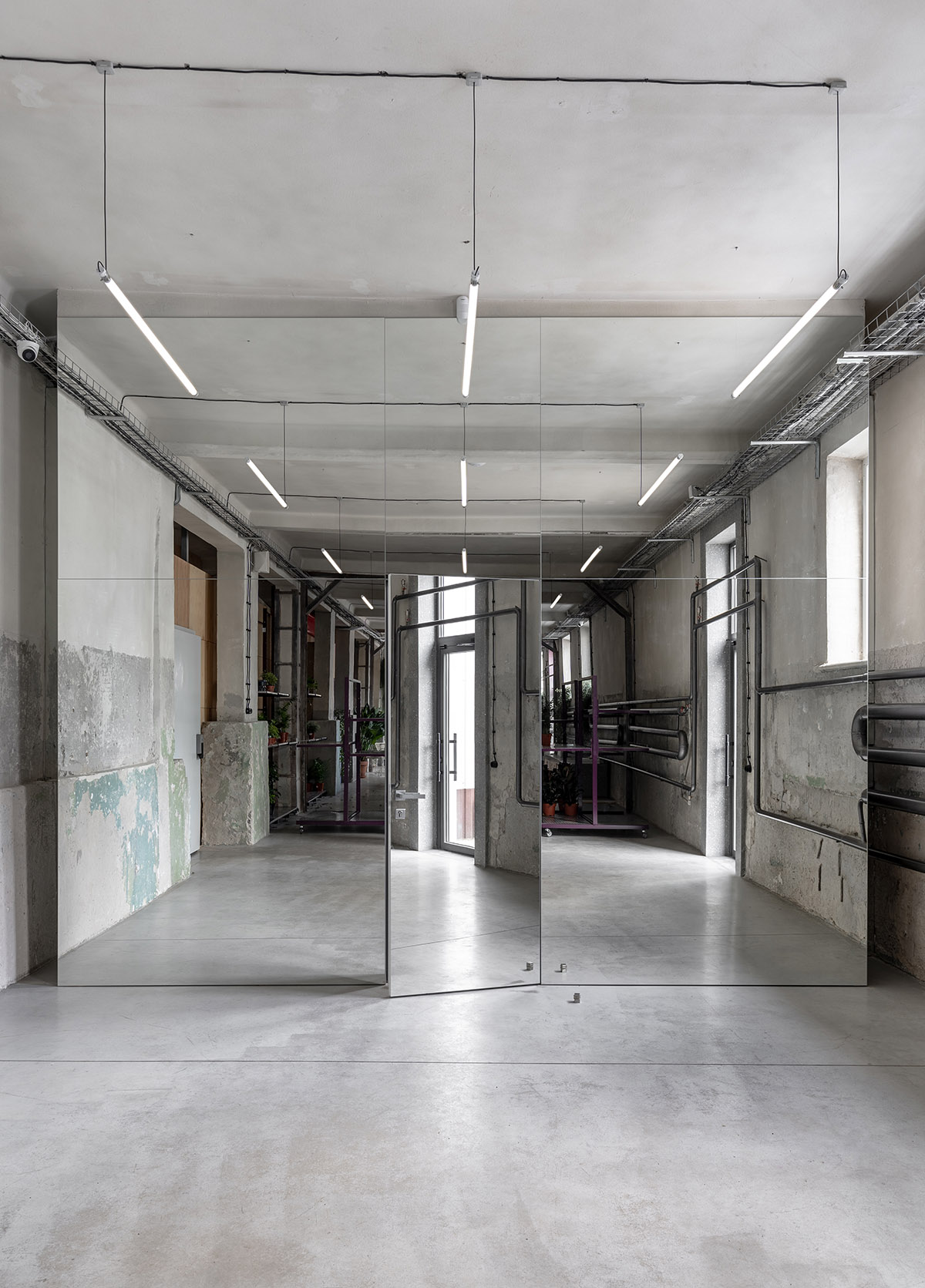 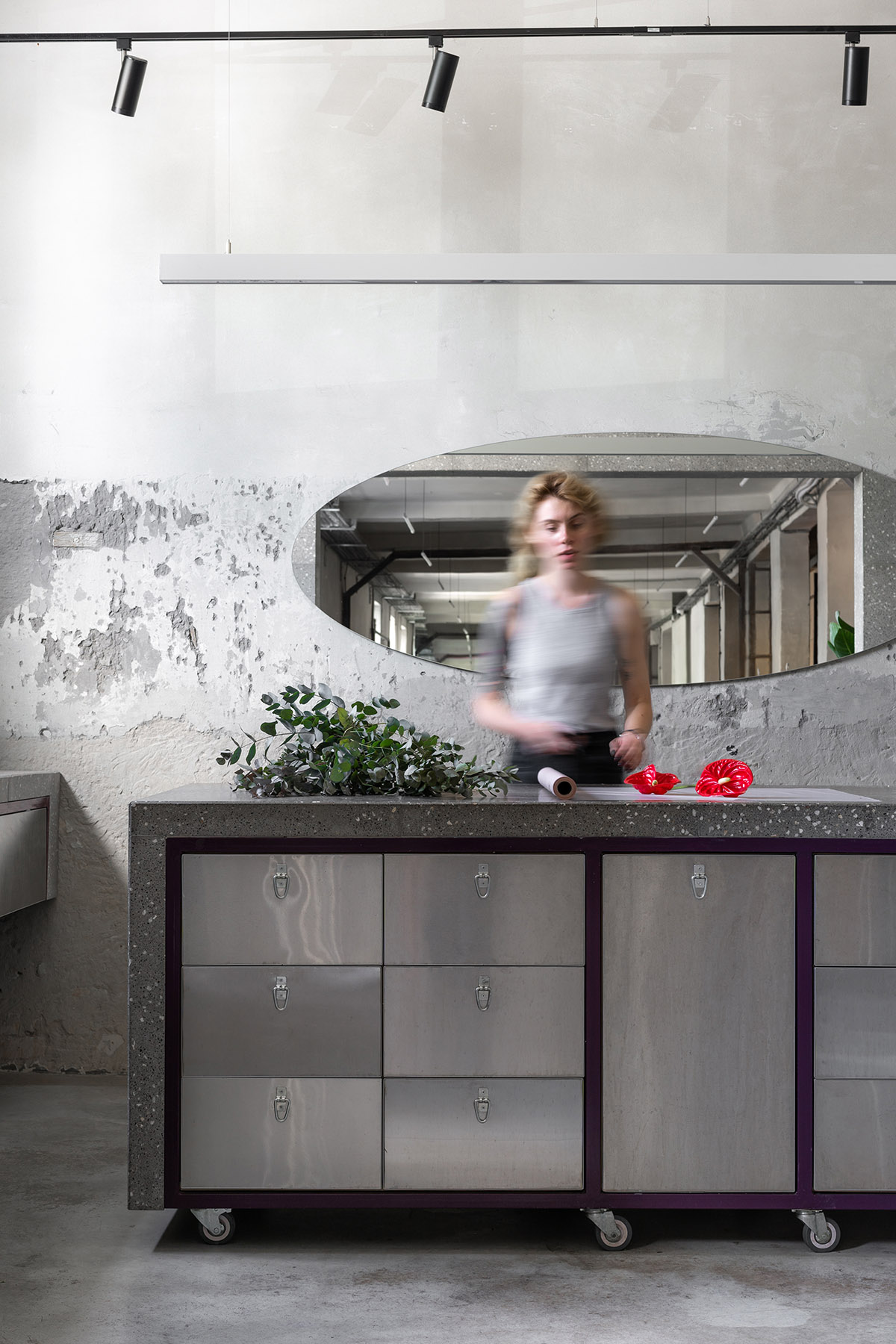 “This is a unique solution for Ukraine. The corners of the furniture were cut at 45 degrees. Our studio previously developed a table for florists for the Dicentra store in Lviv. It is double-sided, with drawers and waste bins on both sides. The heavy table is wheeled, so it can be moved around - this is useful on days that are selling for flower suppliers: March 8, February 14 and school holidays”, Says Rina Lovko Studio. 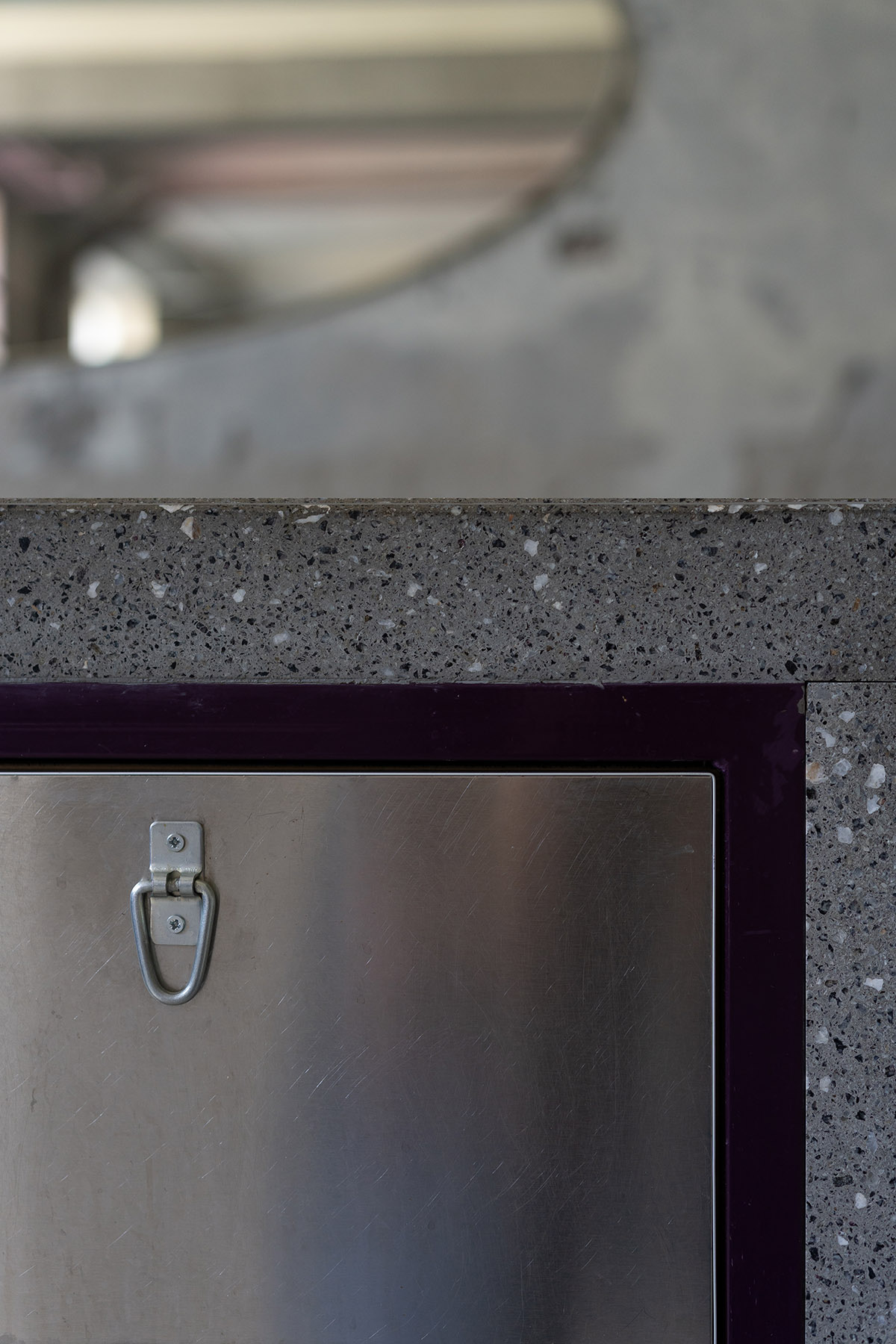 The need to move the table was also a technical task. Above the table is a lamp with a diffuser for comfortable work. On the contrary, a glass partition was needed to see the bouquet from inside the store for the florists. For visitors, lights and outdoor furniture like metal tables and chairs paint the picture. The plant products were placed around the guest area to be picked by the visitors. Mobile shelves were developed for transporting flowers. These shelves were made with special milling, which allows you to quickly change the height of the mount. Black perforated stainless steel was used for these shelves. 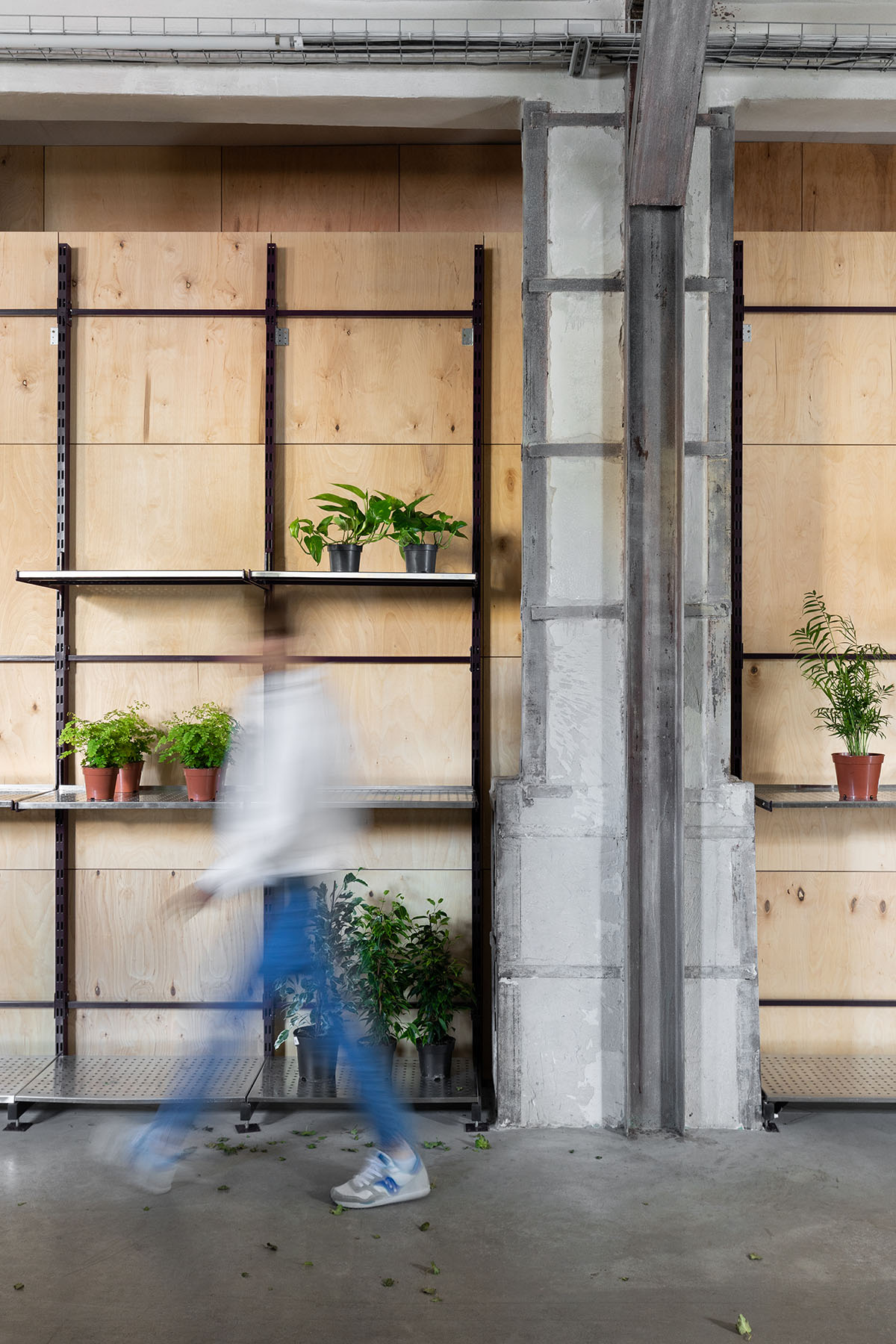 “A second color – Magenta, was chosen to dilute their overall metal background. The main entrance is made of red perforated mesh, and above it we placed a neon sign. Against the background of the industrial zone, this is very noticeable, which again is advantageous in terms of retail sales”, says Rina Lovko Studio.