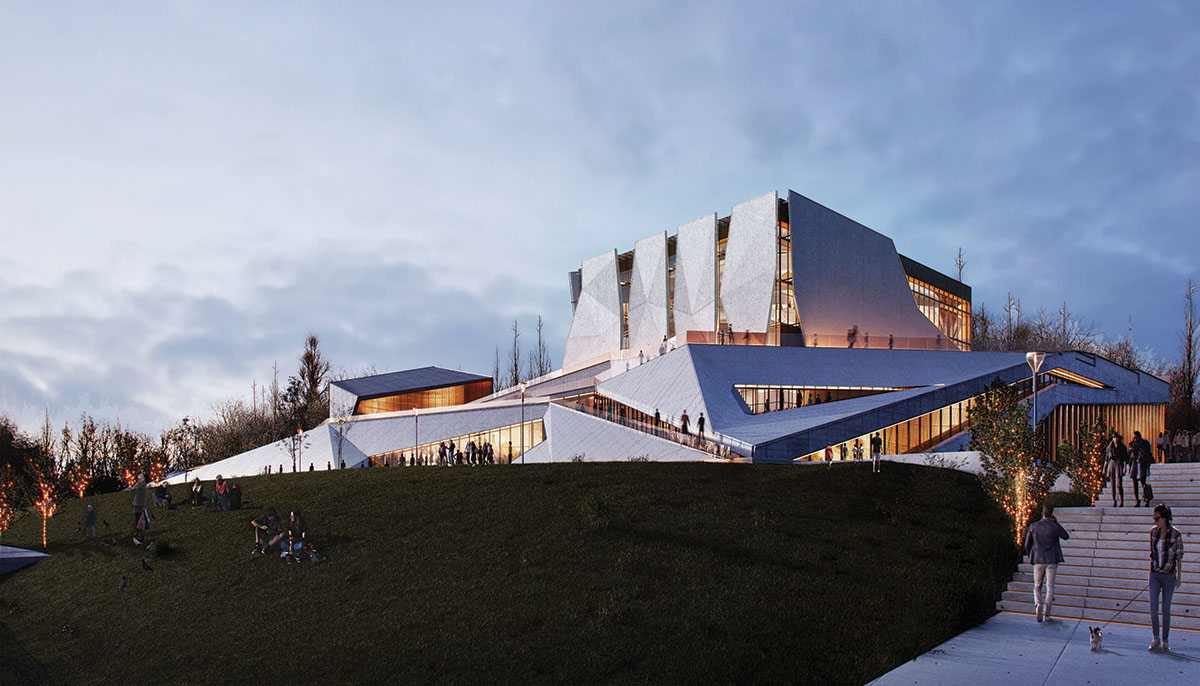 IATBW (International Architecture Team for Better World), a group of middle-eastern architects, has released its design proposal for the Vilnius Concert Hall, Tautos Namai International Competition, aiming to find the best architectural and planning solutions for the National Concert Hall and the surrounding area, taking into account the urban and natural conditions of the venue.

The competition asked participants to find an exceptional, outstanding, original design in terms of artistic expression and architectural concept for the National Vilnius Concert Hall in Lithuania. 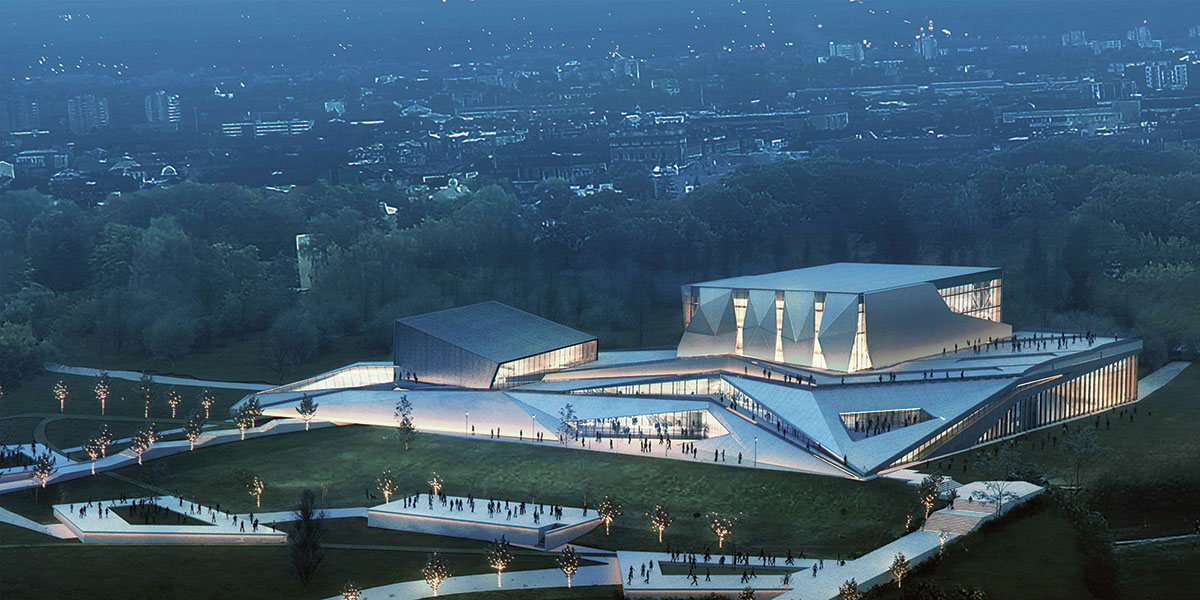 The competition completed to receive submissions in June and the official results are expected to be announced in September.

"An inspiring, intriguing and iconic building representing the European culture, this is the main issue of our Vilnius Concert Hall design proposal, where the proposed vision should provide a unique addition to the city besides fulfilling the international standards for concert halls," said the architects in their project description.

There is always a linkage between architecture and music, both deal with human emotions and feelings, in fact, most of the architects and musicians recognized this for a long time ago. 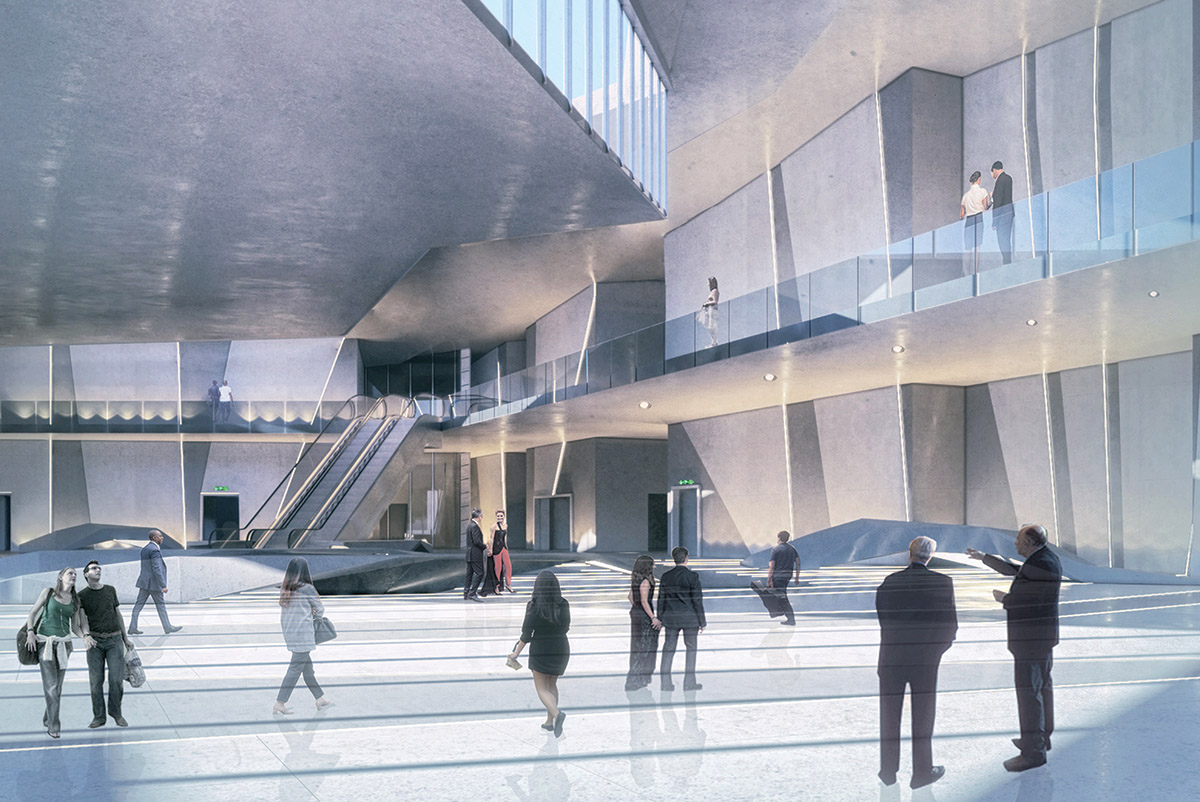 The concept of the work depends on the idea of diversity, the existence of old Vilnius city center besides the contemporary one, the traditional prestigious past which generates the Lithuanian present and future.

By noticing such diversity, this led us to the revival phenomenon. In order to overcome your past, you should firstly accept it, learn from it, and make advantage of it as a new starting point towards the future. 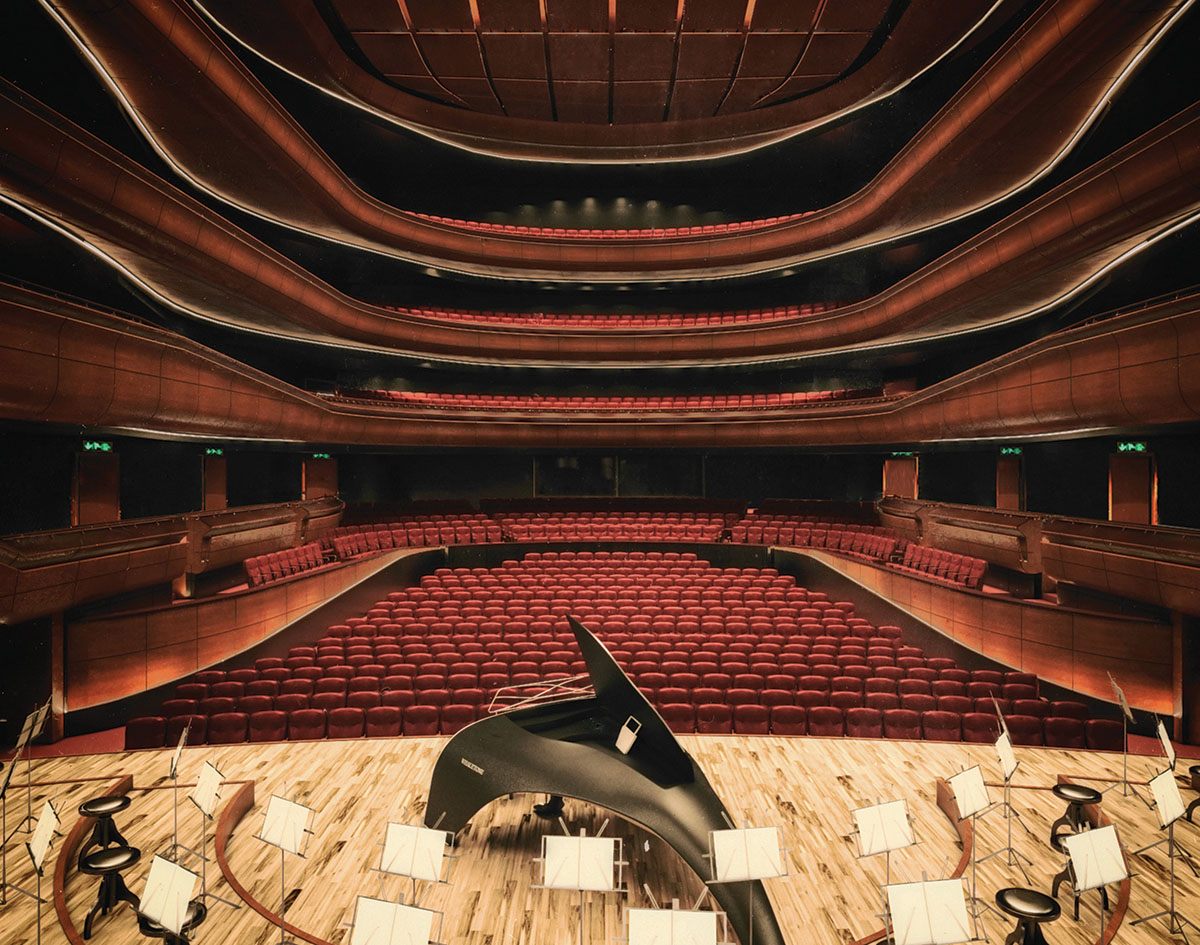 The above principles were the base for our form conceptual design, where a welcoming platform exists above the given construction area, this platform embraces the two cuboids, the grand concert hall and the minor multipurpose hall respectively. The two halls are obvious, clear and visible from outside to the visitor and even from Neris River and beyond, that is to say, there is no need to hide the identity of the two halls, as the building is clearly expressing its own function.

The grand concert hall is a rigid, firm and tough form, moreover, its orientation is towards the northern side, towards Lukiškės Square. Its plan and proportions are derived from the former union building. This hall represents the dignity of the past and Lithuanian culture, that’s why it inherited the principles of the former union, with similar planning; the center and the two wings. In addition, it is designed to be the main icon of Vilnius, due to its simplicity, orientation and pure form. This is also reflected in the interior design, where a simplified dignified classical design theme is adopted, with luxurious seats and wooden cladding for interior walls. 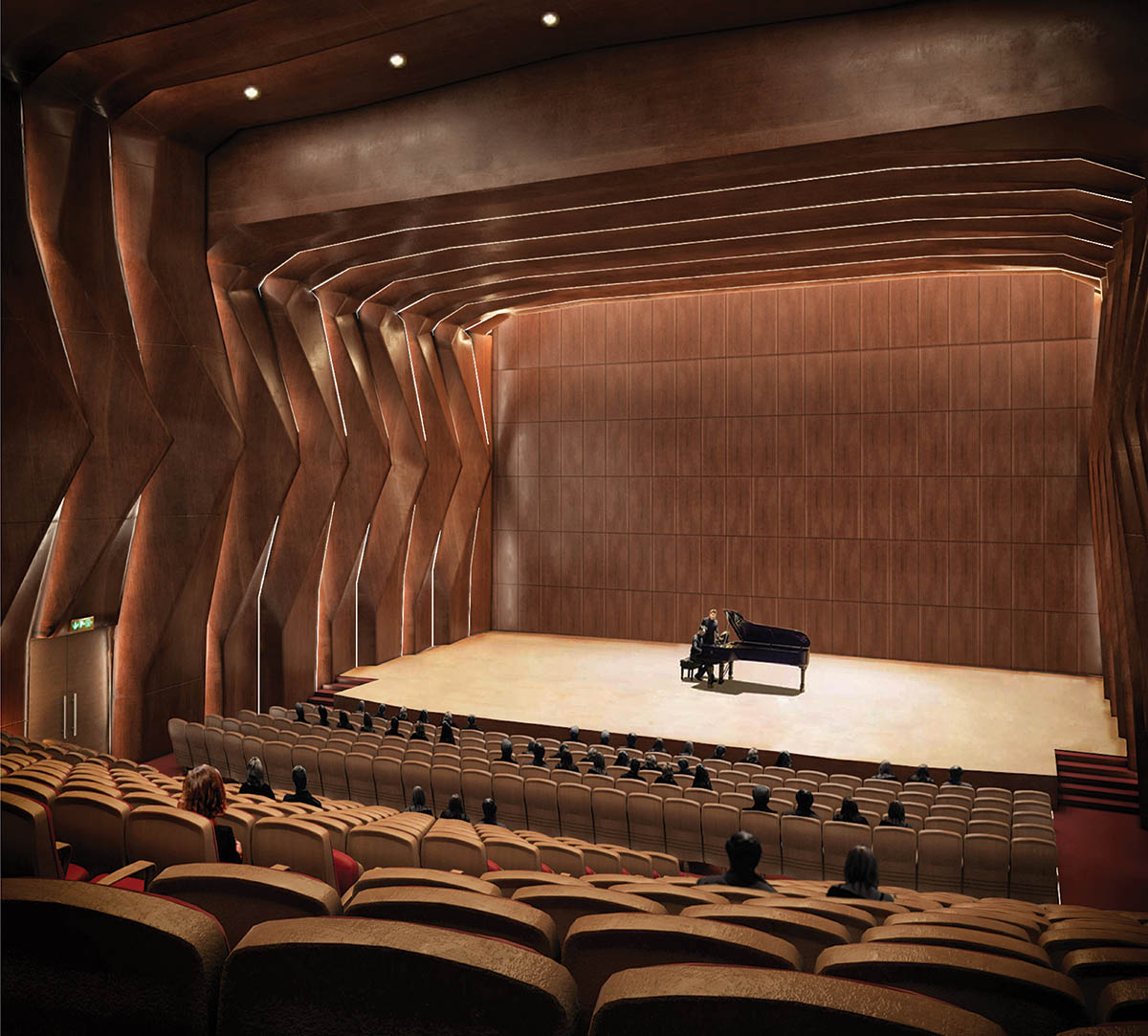 The minor multipurpose hall represents the emergent side of Lithuania, the promising future which depends on the Lithuanian traditional principles. For that reason, its orientation is inclined apart from the planning orthogonal grid of the whole building. Moreover, the interior design also reflects this vision with a contemporary design.

In addition to hosting the two halls, the platform provides a public space for visitors via an enjoyable path starting from the surrounding landscape of Taurus Hill, and even from the bus station itself. The target here is to provide a panoramic view for the city of Vilnius. 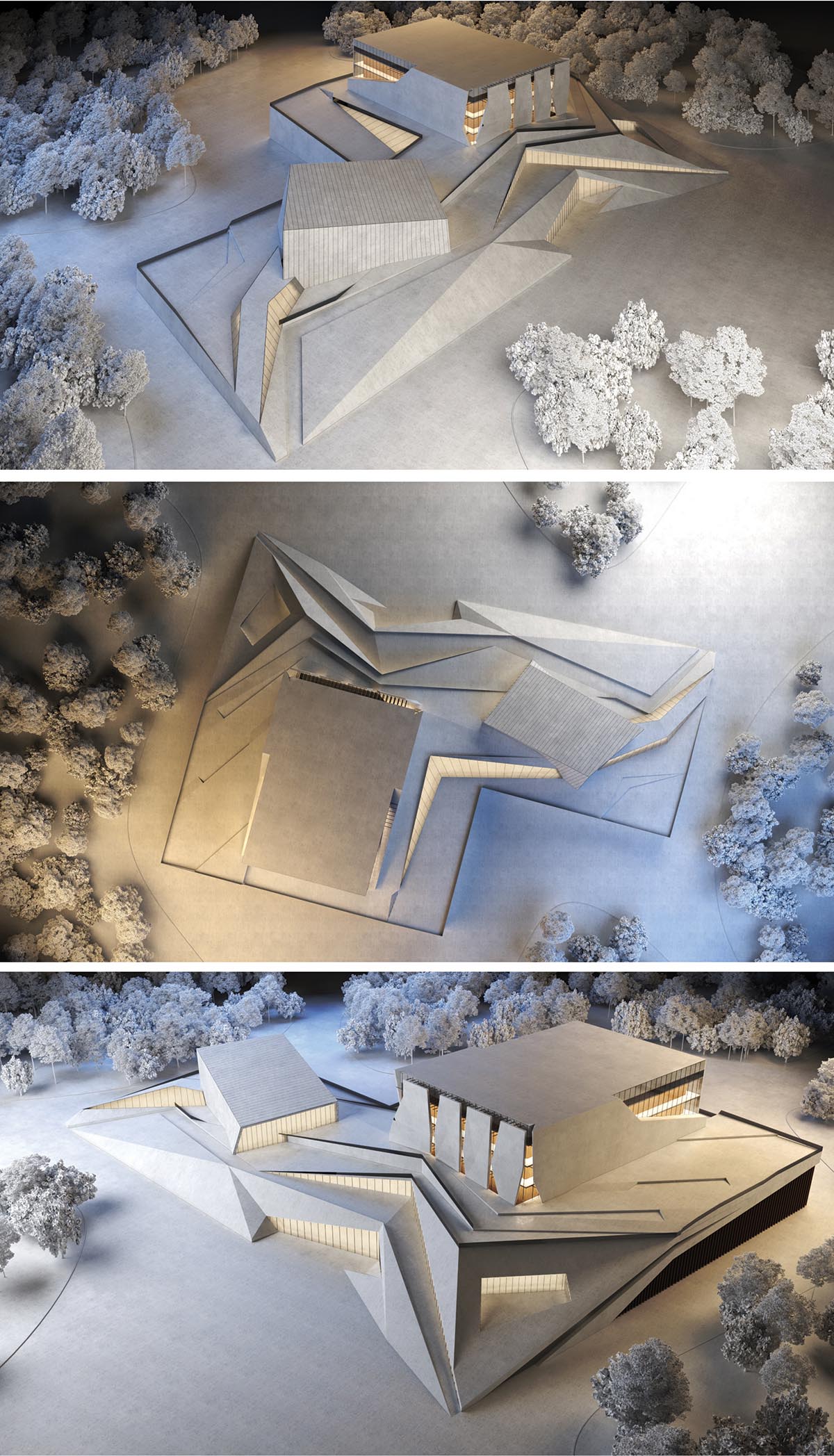 The landscape design was influenced by site constraints, due to the site characteristics, especially being placed above Taurus hill. The design of landscape depended on preserving and emphasizing landscape tectonics, because both the building and its surroundings should be homogenous with each other, in other words, all components are complementing each other. The tectonics are spreading along Taurus hill, then it forms the podium platform and the iconic entrance.

The entrance is meant to be eye-catching as a destination for the project, besides, there is no need to fake a form or to hide the real function of the project; that is why the two halls are obvious above the platform.

The minor hall's form is slightly adapted to the inclinations of the podium tectonics, whereas the main hall is maintaining its solid dignified form, controlling Taurus hill, and monitoring Vilnius city.

The grand concert hall has a total seating capacity of 1674 seats, including 150 choir seats. The platform itself is large enough to accommodate a full symphony orchestra of 100 musicians, with the option for choral seating behind this. The platform formed of a series of adjustable risers to allow for a greater flexibility in the correct staging of events. The hall provides suitable clarity, acoustical intimacy, spaciousness, loudness and reverberance. For acoustic flexibility, a variable absorption system (VABS) is provided. 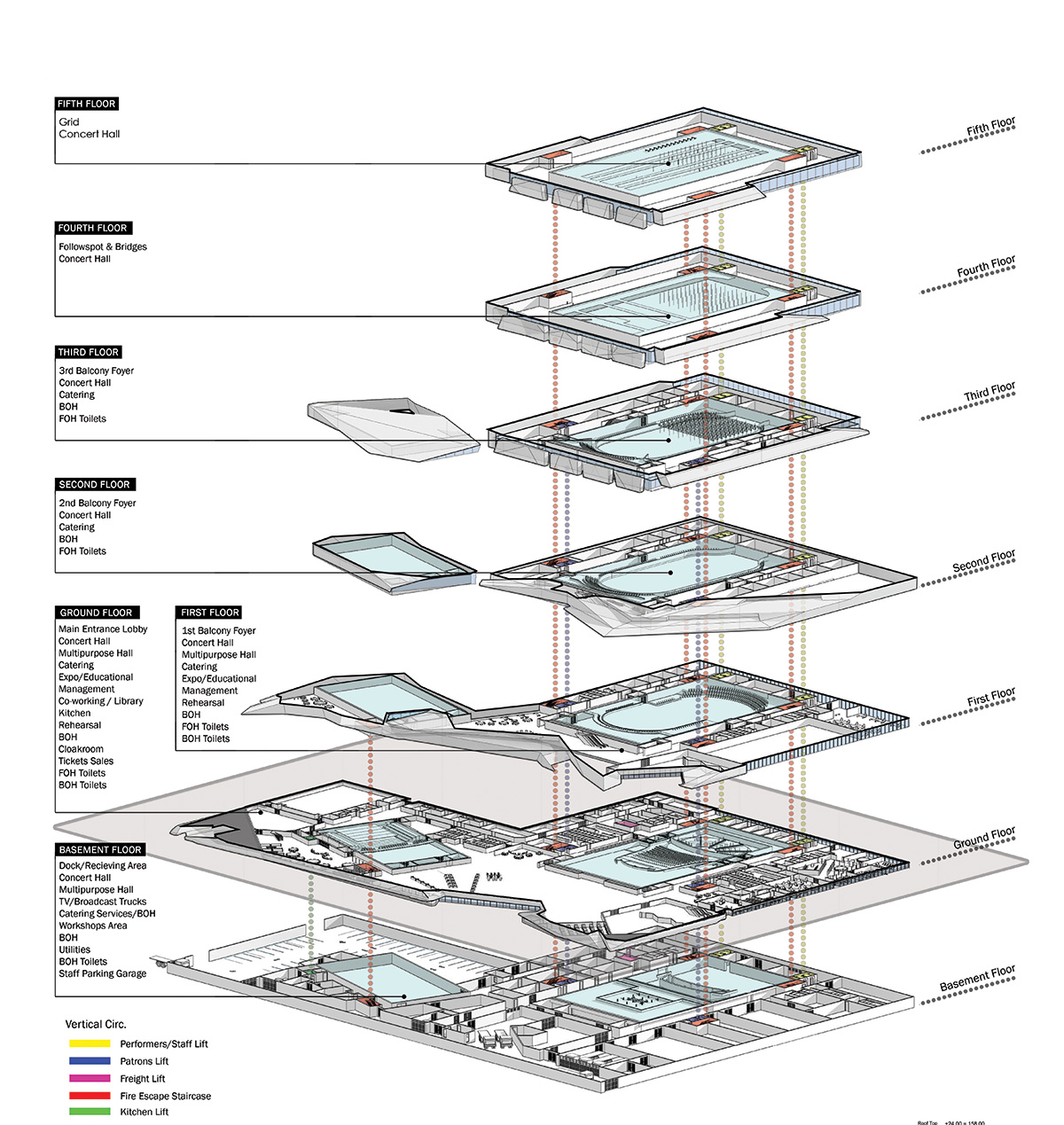 The multipurpose hall is a smaller second auditorium that has a total seating capacity of 500 seats to present a wide spectrum of events. The space acts as a springboard to the main space and potentially as a part of an education program.

To provide the ability to present local artists and work, and able to accept and correctly present a wide range of events. The venue switches between multiple configurations in just minutes with independent row/lift technology with essential flexibility. 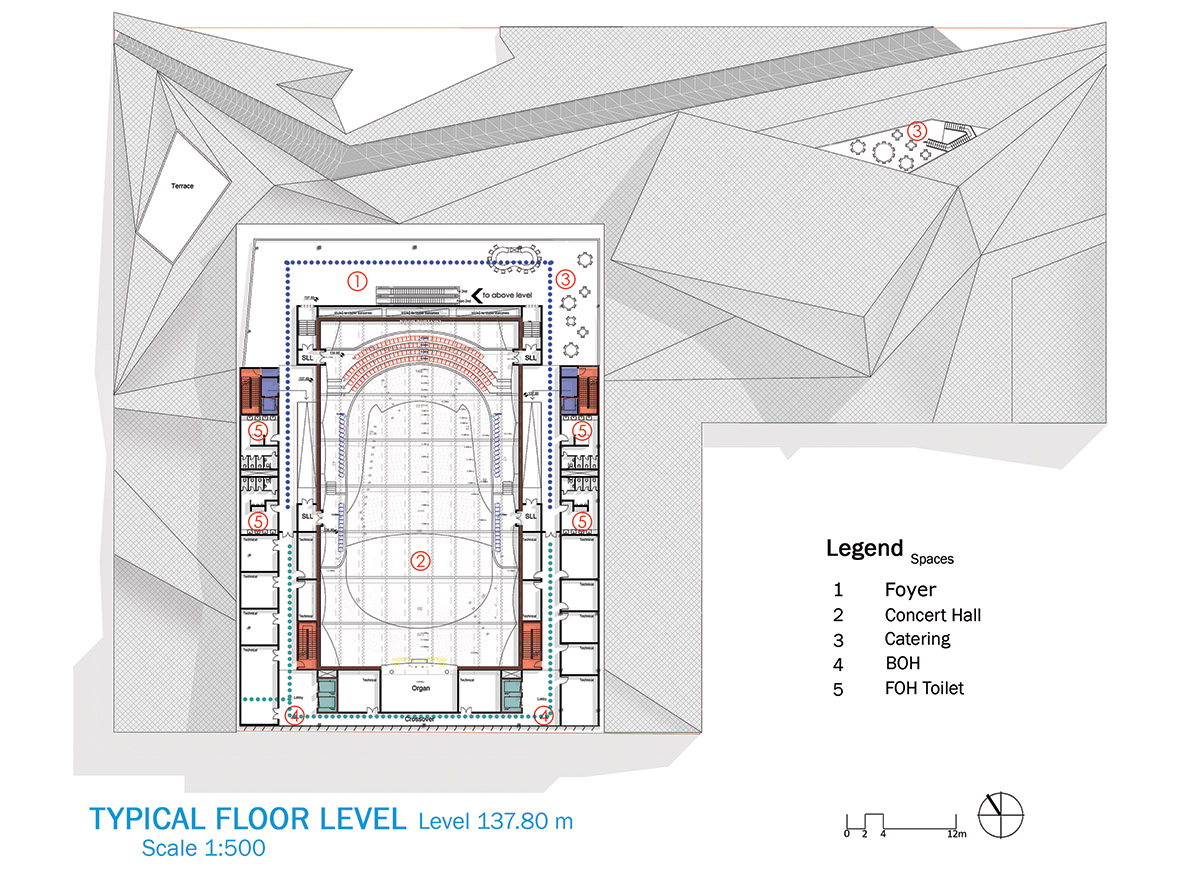 All images courtesy of IATBW