How to find water again in your city? By Aquifer Recharge 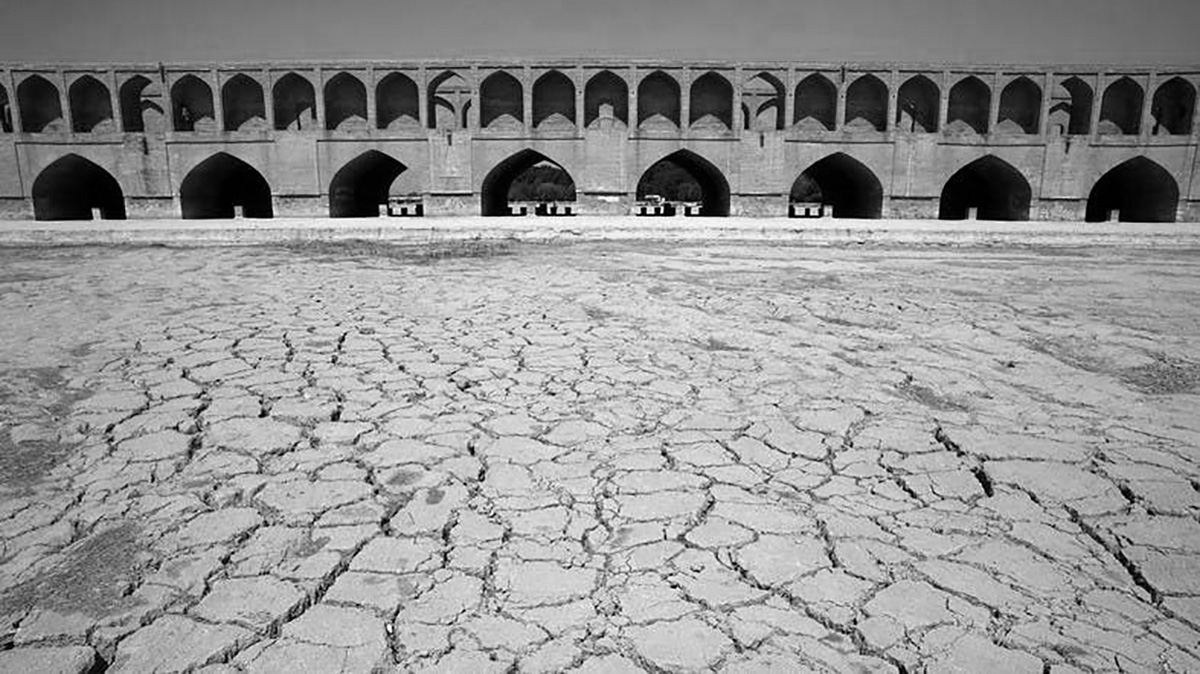 The Bhundelkhand District of Madhya Pradesh saw an exodus last month. The state is scorched by 45 degree Celsius causing a water crisis. 162 villages are dry with over 80 water bodies dry and 40,000 hand pumps not working anymore.

Down south, the locals in Chennai aren’t new to waking up to the taps blowing out air. But it’s hard to get familiarized to the inactivity to adapt to the rare Monsoons. The state is blocked from the South West Monsoon that feeds majority of the country, by the Western Ghats. This combination, in addition to incessant exploitation of groundwater resources,  has brought a water crisis to the city.

It’s shocking when waterless days arrive unannounced, but when you’re notified earlier, like in Cape Town, all classes are equally punished. They called it ‘Day Zero’ and charted a 90 day plan of judicious water usage. It changed the behavior of the city and they have averted the crisis and escaped disaster.

We can’t blame the ground and the sky for no water. Perhaps livelihood strategies so far have turned a deaf ear to being conservative. 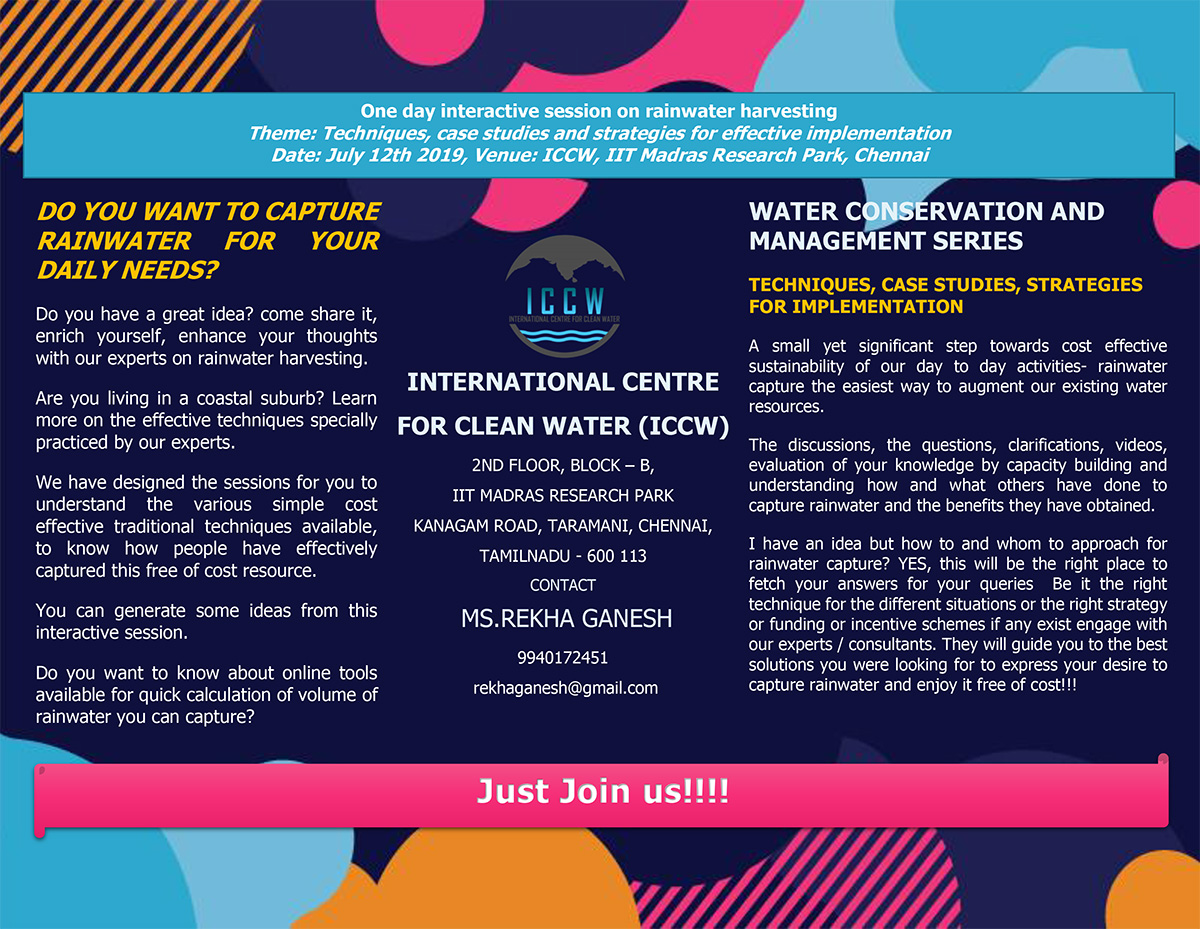 He had teamed up with an MLA to execute ideas of harvesting along the Bangalore’s urban landscape. His presentation was a collection of various ideas to harvest rainwater, applicable at different contexts. Visitors had an insightful session. 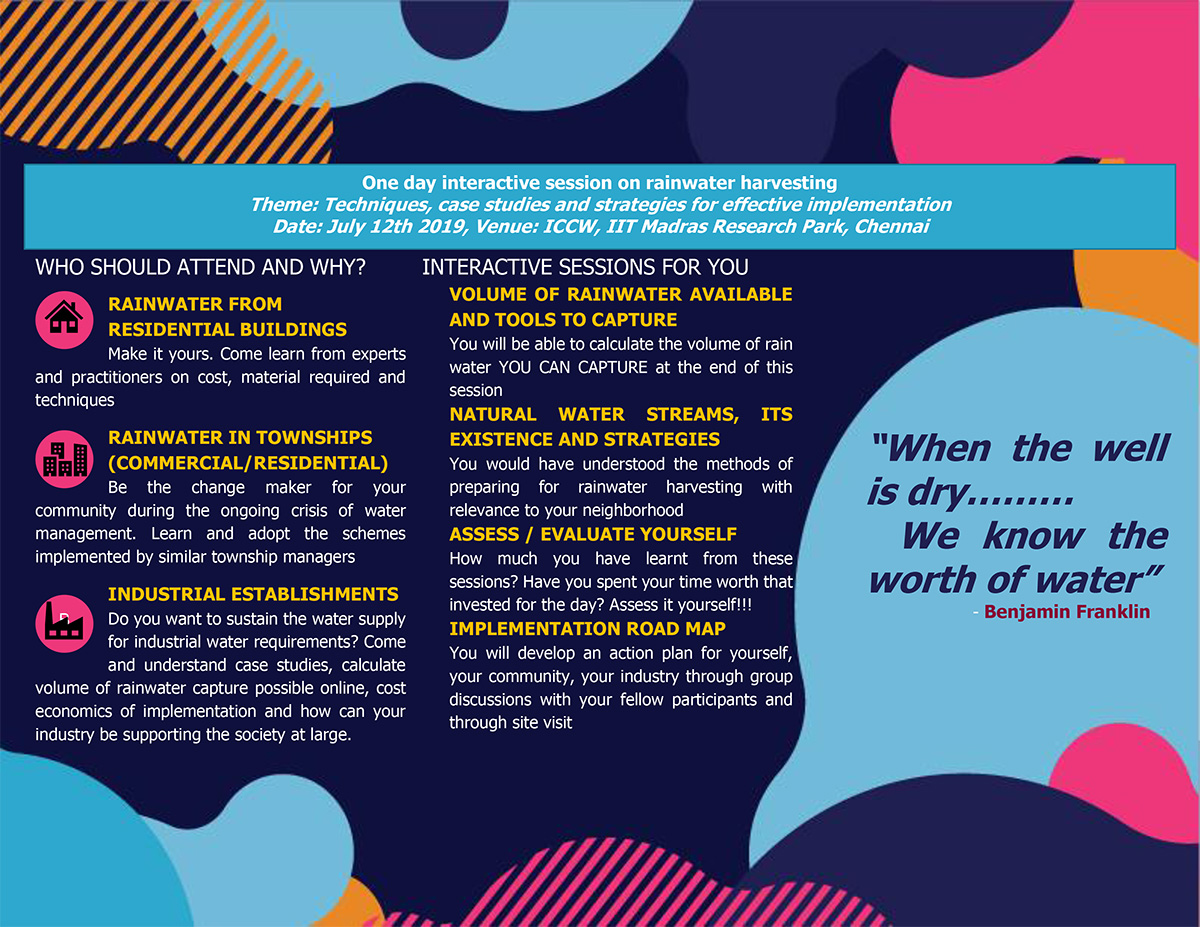 The importance of the session though was the presentation the years-long work put in by AR Shivakumar’s team to develop a rainwater harvesting app, while everyone else did not recognize water shortage as a chronic issue. The app has comprehensively compiled climatic data and directories of civil persons to build harvesting systems. The app is a calculator where people can calculate the area of their rooftops and open areas which receive rain, and estimate the amount of water that can be harvested or stored. According to the estimate and contexts, the app suggests ideas and contacts to go ahead with a project.

What Is Aquifer Recharge?

Aquifers are naturally formed underground lakes of water spreading several square kilometers. And in parts of the underground where we can’t find such lakes, the rain seeps through to fill the earth in its voids between bedrocks and the soil, forming long caves of water. These are called aquifers. They contain the groundwater, which is a fresh resource provided to us by the hydrological cycle. Aquifers should be recharged all time and not abused. 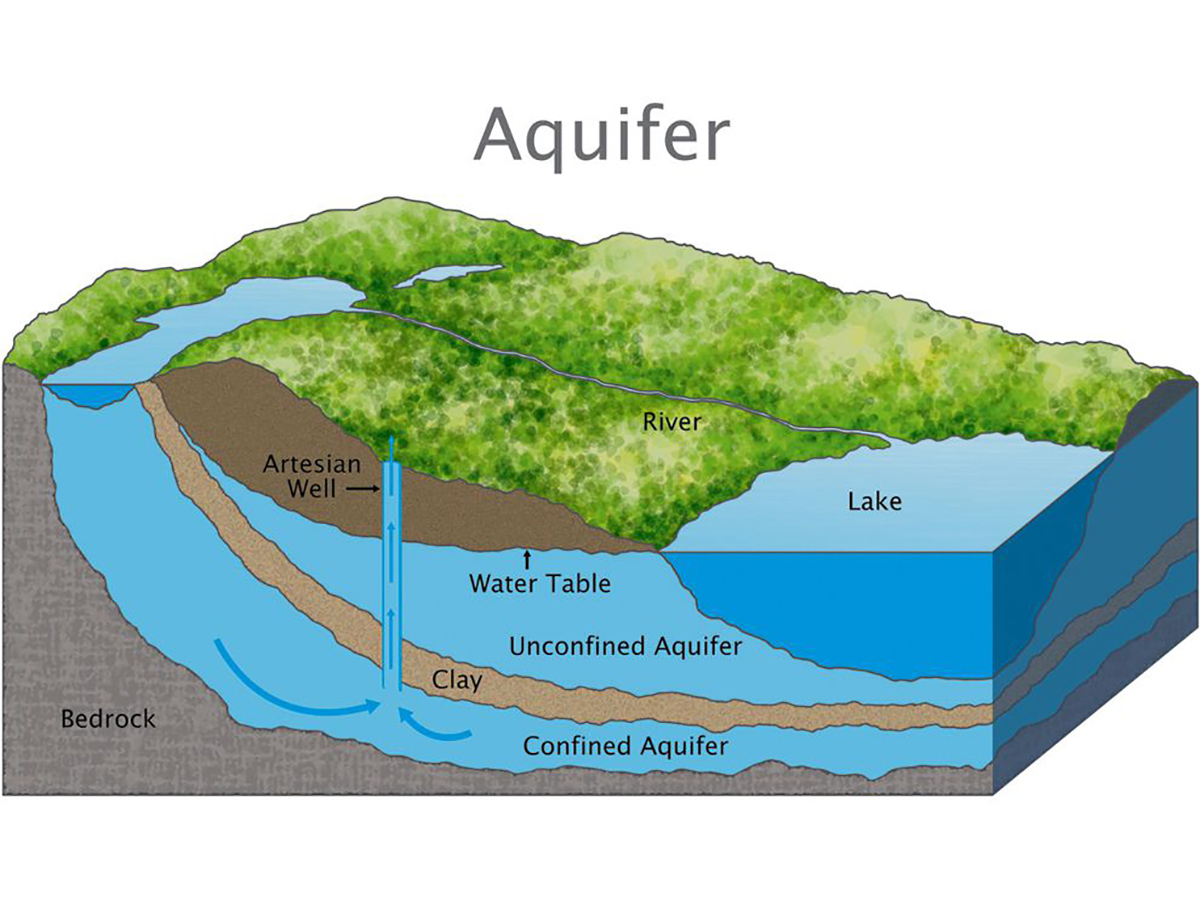 We dig bore wells to intercept these aquifers and suck up the groundwater via pumps into overhead tanks. While we do this, the area around the bore wells will dry up a certain radius of groundwater leaving the earth inequitably damp. In simpler words, bore wells suck up parts of the earth dry, killing the hydrological cycle. 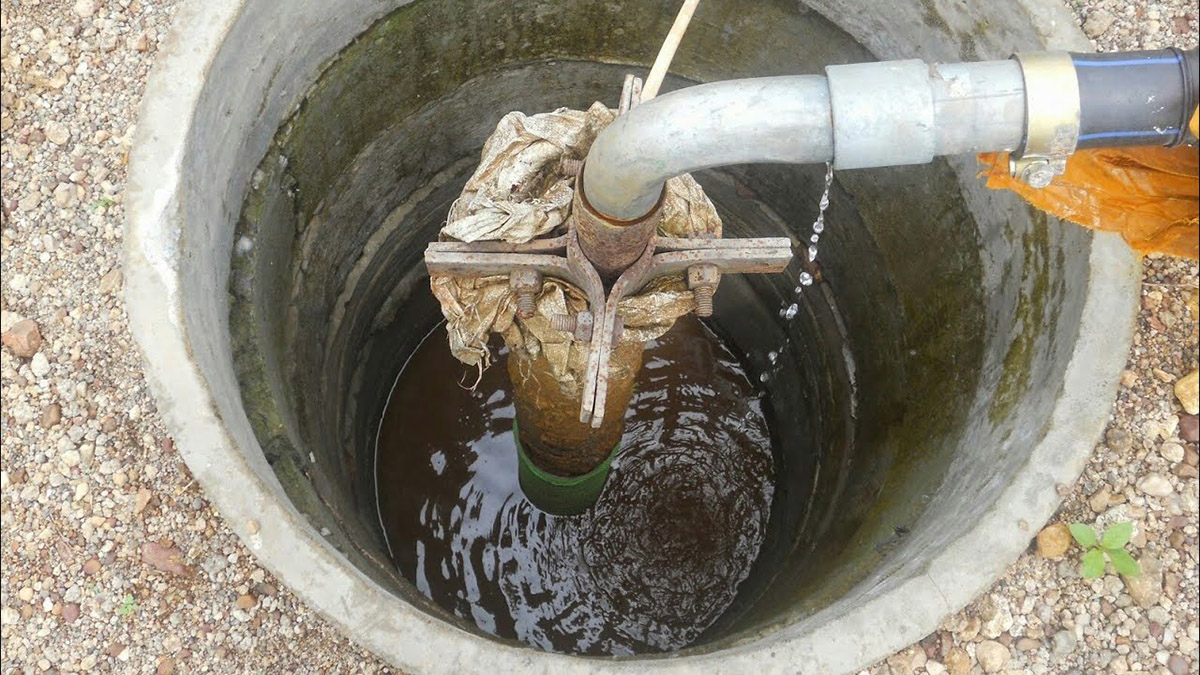 Hence, ancient wisdom opted for excavating for large wells that let the aquifer waters to flow in and fill up, for people to later carry the water out in buckets. This system doesn’t mechanically suck underground water, but just channels the aquifers to a checkpoint where people can access it, thereby maintaining hydrological structure. Water in the wells will keep evaporating and also seeping underground, without providing shortage while it lasts. Traditional wells also inject the water back into the aquifer. 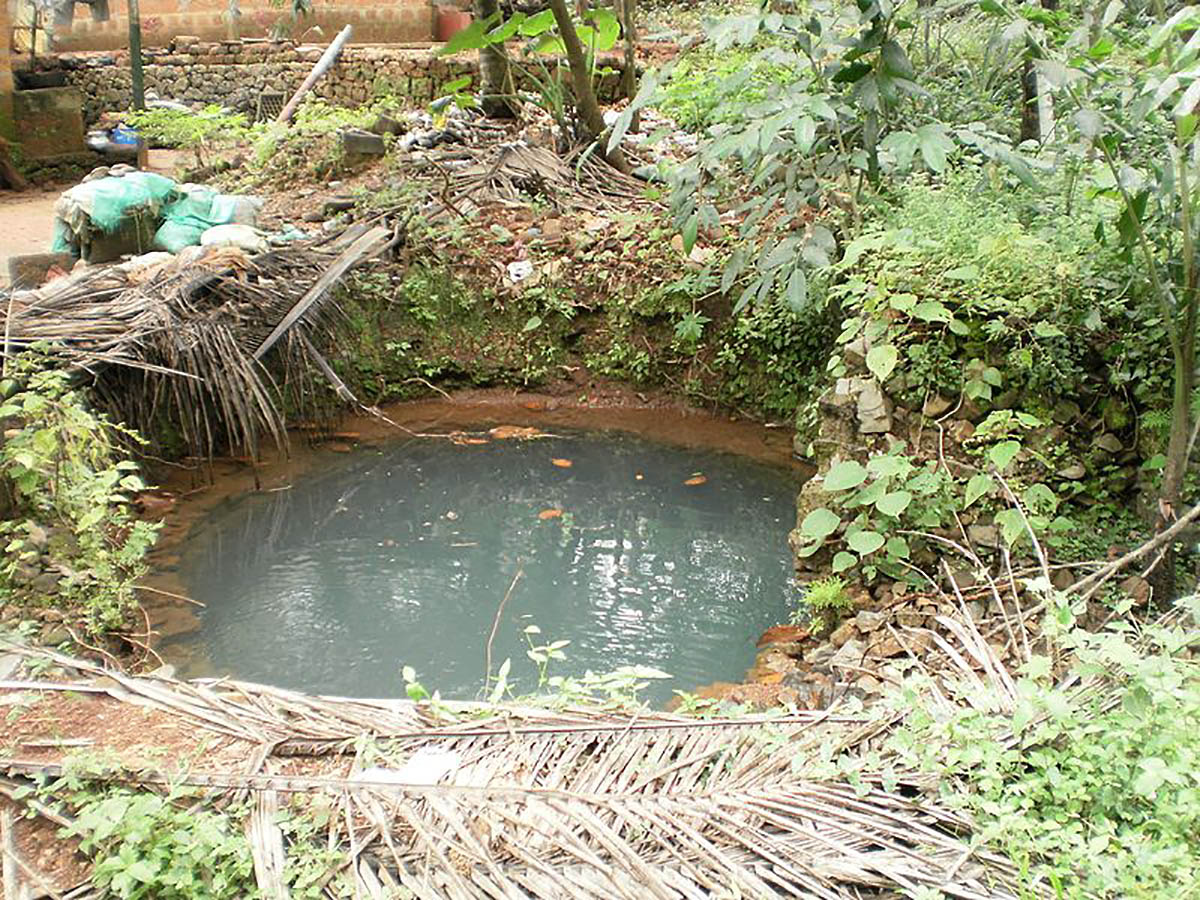 A Live Case Study In My House

My apartment has a storm water drainage line along the south and east compound walls. The south is around 48 m while the east is more than 50m. Digging up the ground and filling it with blue metal gravel is an old school idea for on-site water management and harvesting. But old habits die hard. This will draw the water in by filtering it across the gravel layers. An engineer from an NGO, "Nallore Vattam" (Circle of Good People), suggested digging up about 2 to 3 feet of the ground. My apartment’s association snoozed on these plans for a while until everyone were dejected about technical mishaps in pipelines bringing water to the homes, expensive corporation water tanks and a boring bore well project which might fail. Then they agreed on the RWH idea, after the NV taught the association on how recharging aquifers is a responsibility. 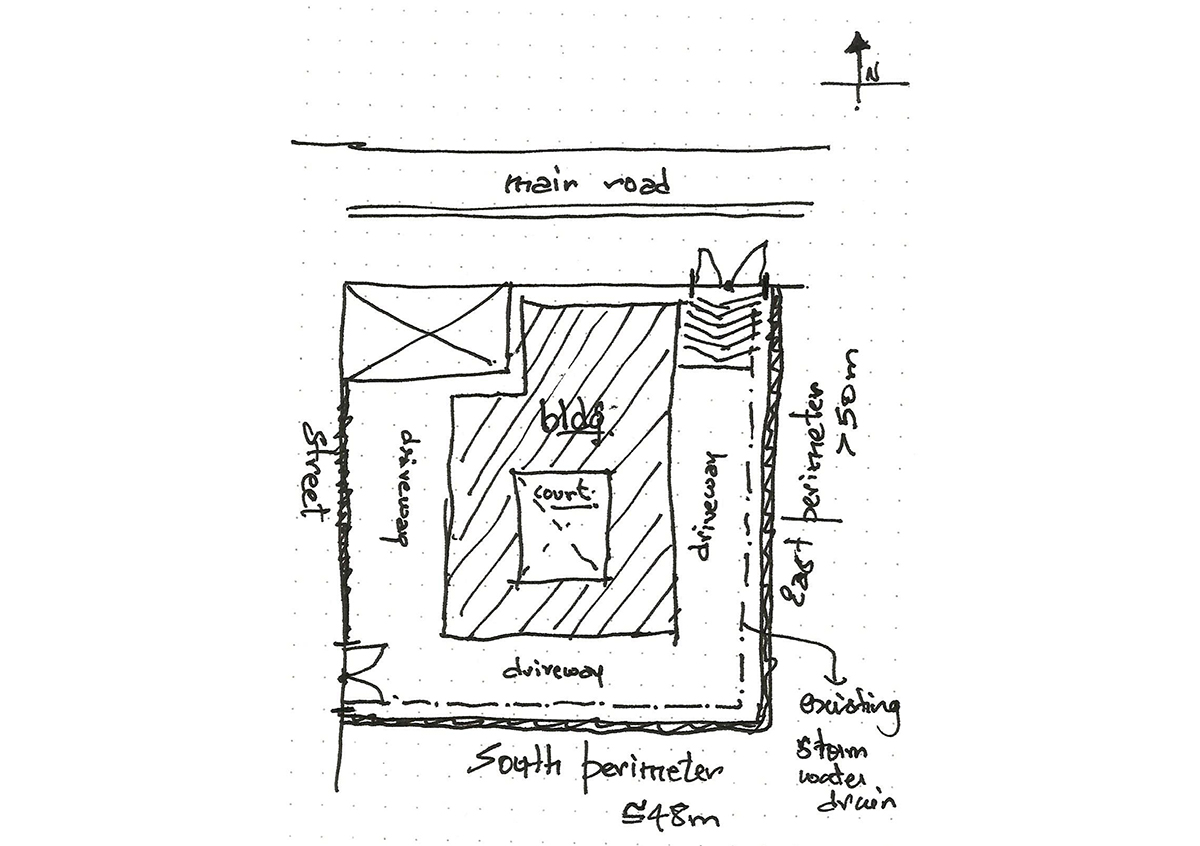 Rainwater harvesting’s goal is to maximize the amount of storm water reaching the earth below. It requires exclusive time to plan the right drainage patterns on our sites and roof tops to carry maximum water into the system, not to mention that volume of water on our terraces too. 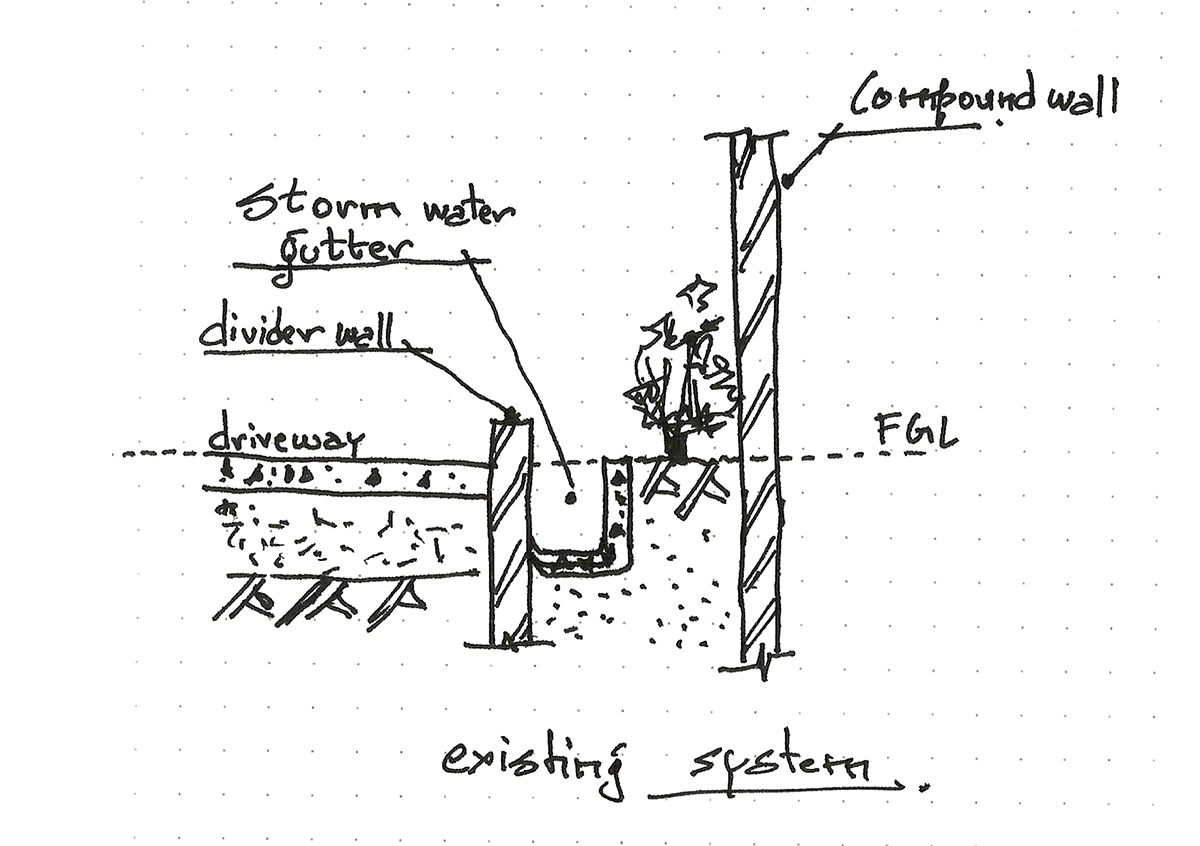 The driveway on the east perimeter opens out to the main road and that on the south opens out the street branching off of the main road. The entrance on the south driveway has a collection pit for the whole storm water drain and it opens out into the corporation sewage line, while it also is a dilapidated rainwater pit itself. Along the entire perimeter, there are two tiny percolation pits which collect rainwater. The building is 22 years old and the association members decided to search where these pits exist and clean it up. It was full of mud. Perhaps these pits were built for the sake of satisfying approval rules, because they’re clearly not serving the purpose.

What System Was Proposed

Now the idea is to convert this storm water drain into a rain water harvesting system. The method suggested drilling the concrete gutter to make 2’6” long pits at intervals of 3’ along the whole length of the existing drainage system. These pits would be 12” to 15” deep, and will be filled with about ¾” big blue metal gravel. The parts of the pit where the gutter is not broken, that is the 3 feet long intervals, will be filled with the gravel too, to a height of 6” at the deeper areas and about 2” at the shallower areas, of the gutter. Hence, we will see a gutter filled with gravel, appearing leveled. 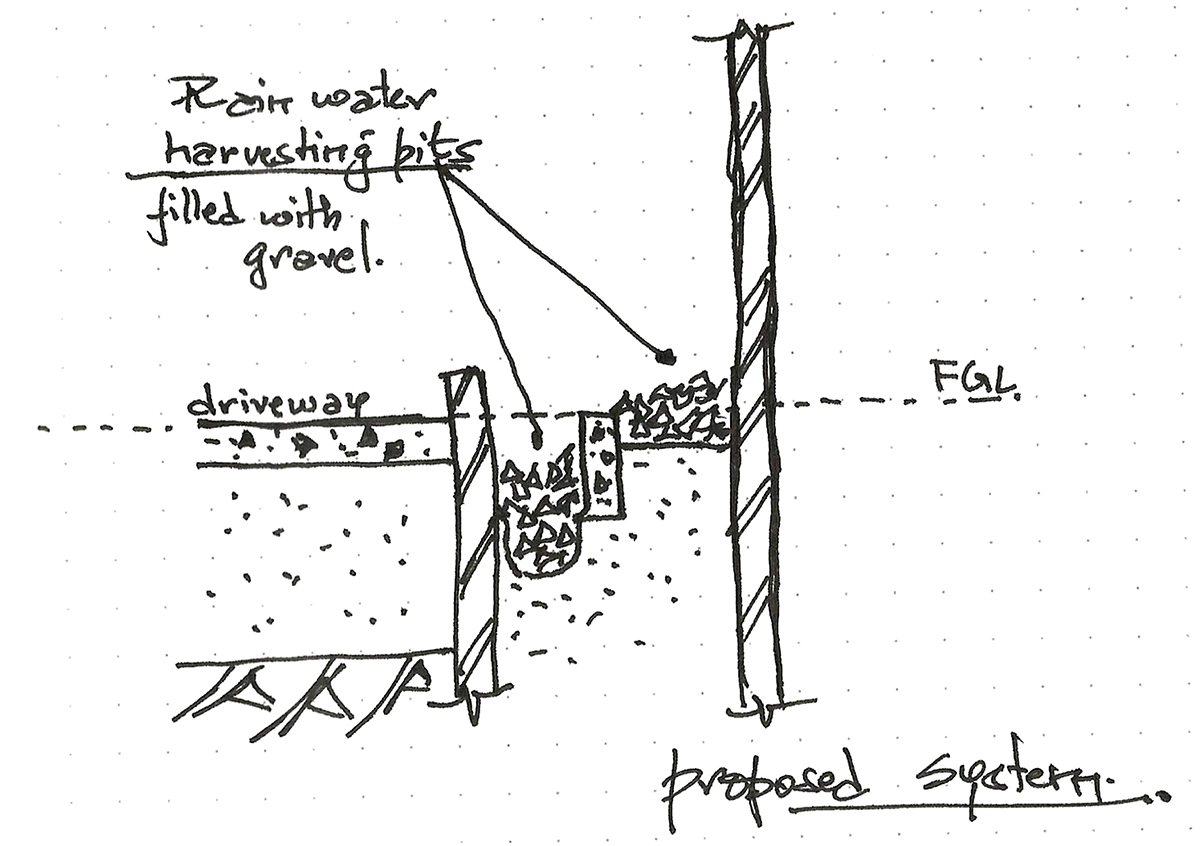 The building’s main road entrance has a long RCC ramp down into the premises. Hence the rain water storming down from the main road had to be channeled into the gutter as much as possible. The ramp hence has a surface finish to slope the water into the gutter. The rest of the water enters the driveway and slopes into the gutter via the slits on the divider wall. 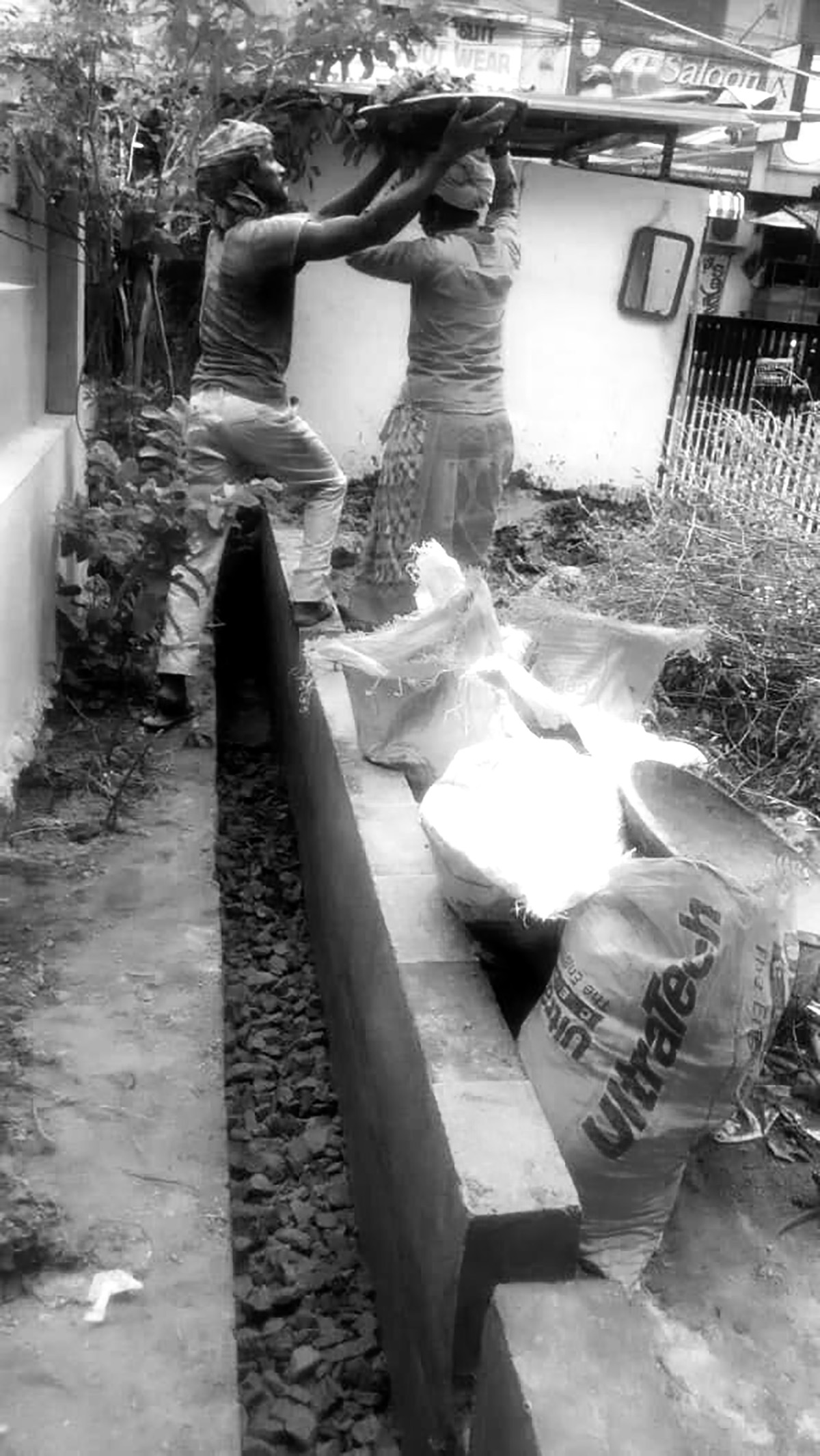 Hence, when the rain pours, the water gushes into the gutter, now a rainwater harvesting system, and flows through the gravel to get filtered, to eventually reach the first pit. The water overflowing the first pit will gradually reach the later pits. All the storm water run-off from the driveway will pour into the pits all along the perimeter, and begin recharging the ground. 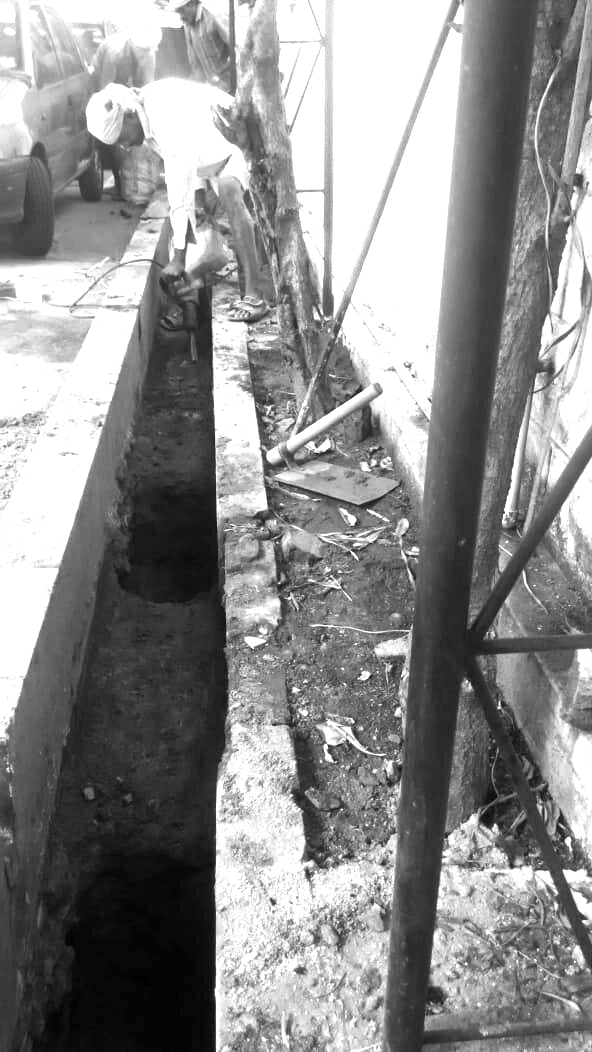 The (assumed to be) planter area of 12 to 18 inches, was also to be filled with gravel, but the association has internal debates on whether to fill gravel there or to plant plants finally. But planting will kill the purpose as about 100-110 meters of water filling up in the 12-18 inch wide pits will not reach the earth, without getting harvested. Further the plants can break and attract diseases.

The idea was to dig out about 4 inches of this planter area and fill it with gravel with a slope that can run off the overflowing water into the storm water gutter adjacent to it, now a rainwater harvesting system. The association is yet to take action on that as it will cost another day’s labor. 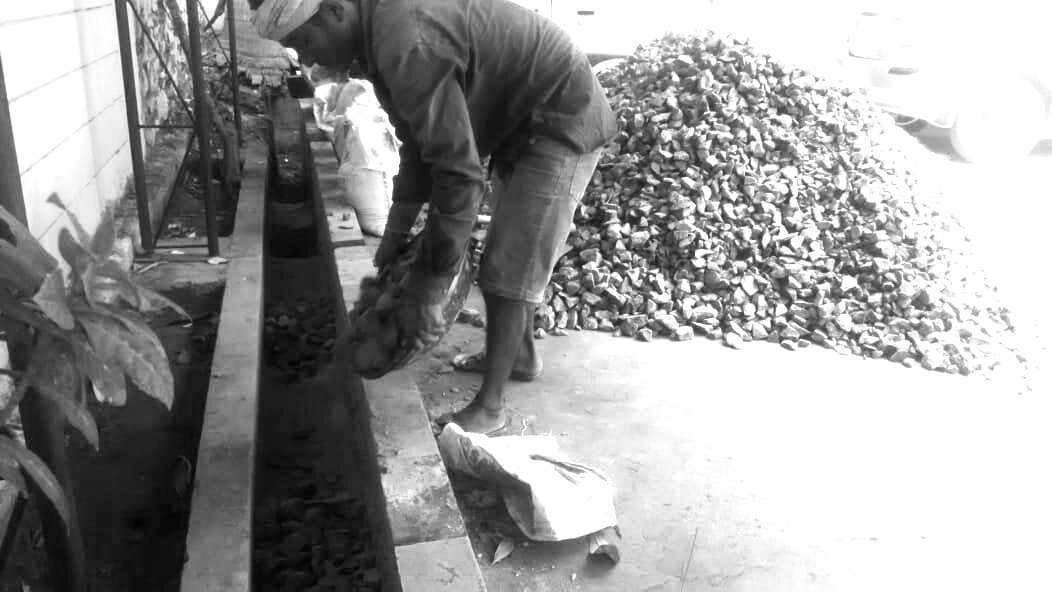 Luckily for us, rains have started now only after we completed building the pits. So it was natural test of the system built, and at the right time. After two days of rain, we checked the system and there was no water logging over the gravel. It meant that the water has been recharged. We’re now officially giving the water back to the earth. 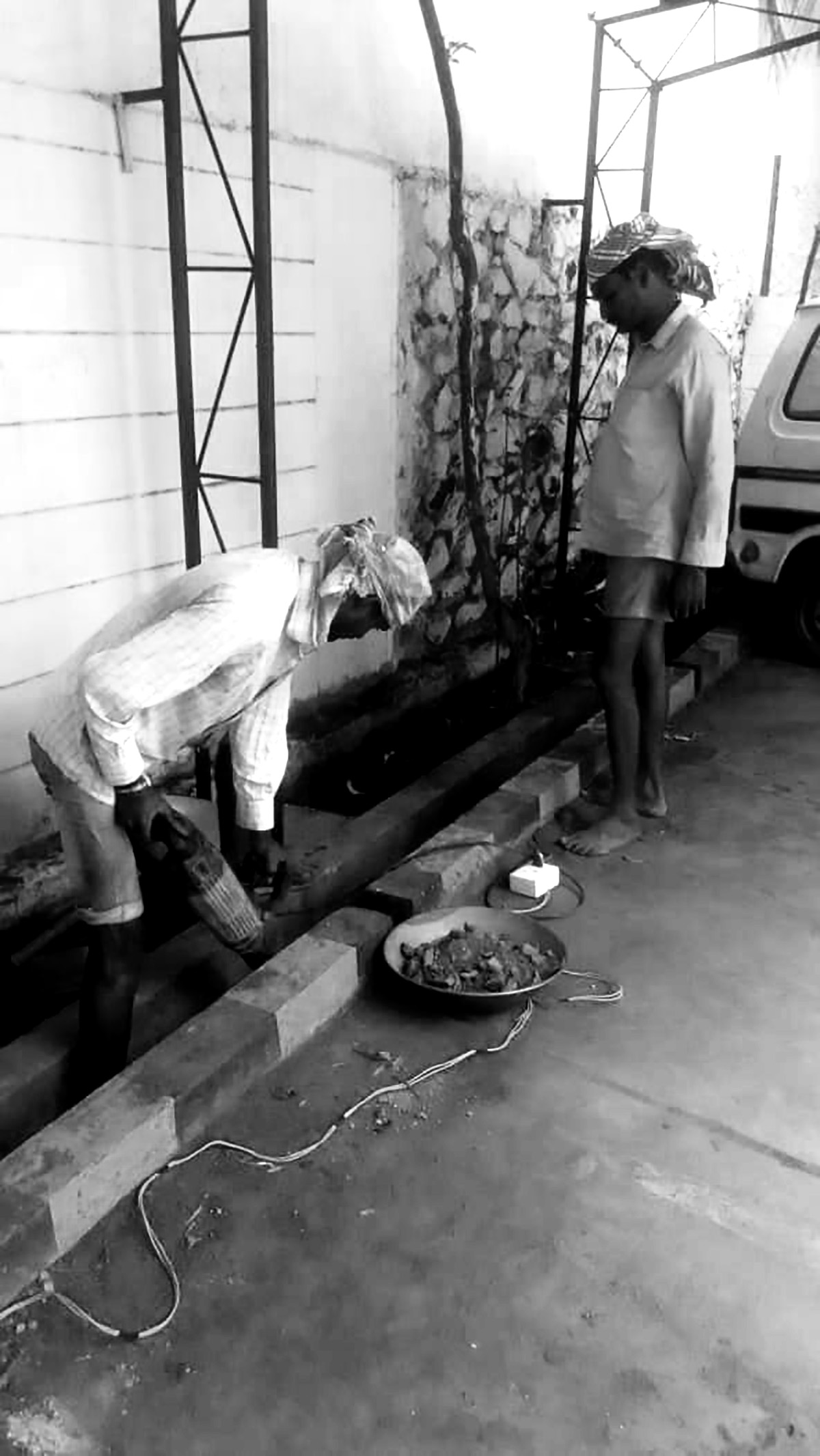 From dry policies to a water driven lifestyle

Typically, most clients today fear the logging of their premises, thanks to Chennai hosting frequent urban floods. This has made newer buildings raise their plinths higher and higher. We need to find a way integrate water in the right way within our sites, rather than being preoccupied about running it off. 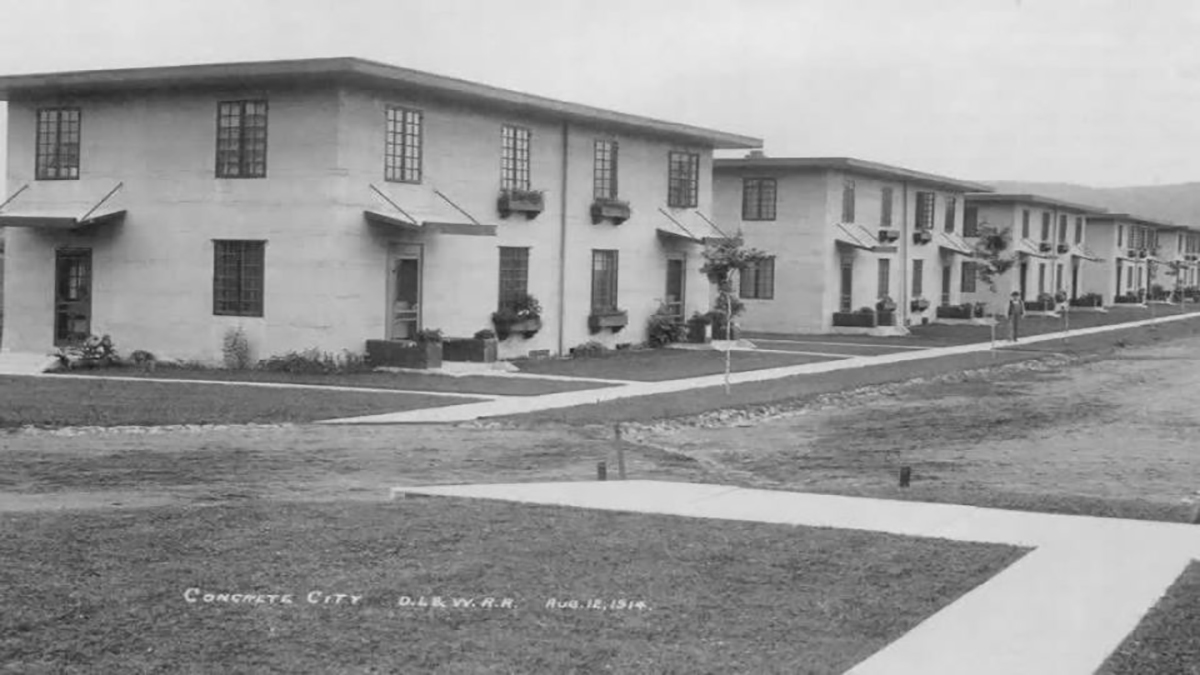 Several decades of the modern methods of planning and over usage of our natural water resources without giving back to earth have caused many water crises. All the concrete, roads, buildings, landfills, polluted riverbeds, etc., have significantly reduced the space in the city’s limits to let rains recharge our aquifers and render us depleted of water. This is not a case of monsoon failures, climate change, or increased summers, but of pure human mismanagement of water and lack of water driven policies.