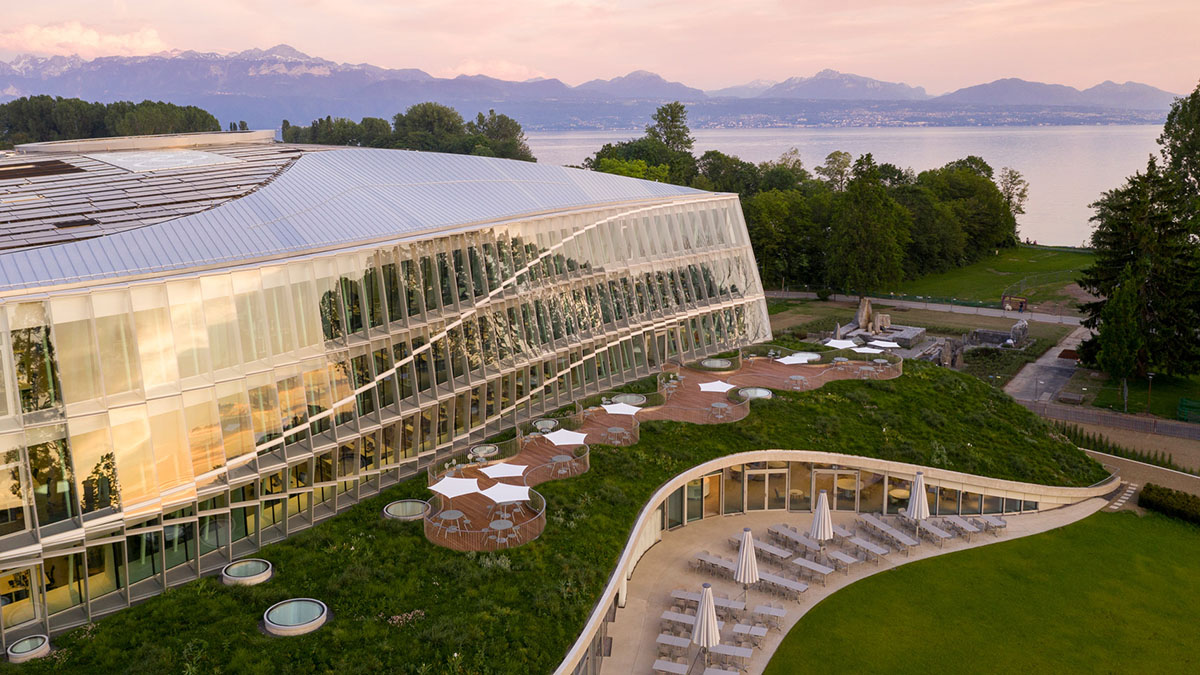 Danish architecture firm 3XN has completed the new headquarters of the International Olympic and Paralympic Games in Lausanne, Switzerland. The sinuous building is set to open to the public on June 23, 2019.

First images, captured by Adam Mørk, show different perspectives and details of the building that will house the IOC (International Olympic Committee) staff accommodating 500 employees currently spread across Lausanne in four locations - under one roof at a single site.

On June 23rd, during the worldwide celebration of Olympic Day, the International Olympic Committee (IOC) will inaugurate its new headquarters, Olympic House. 3XN first released its preliminary concept in 2015. 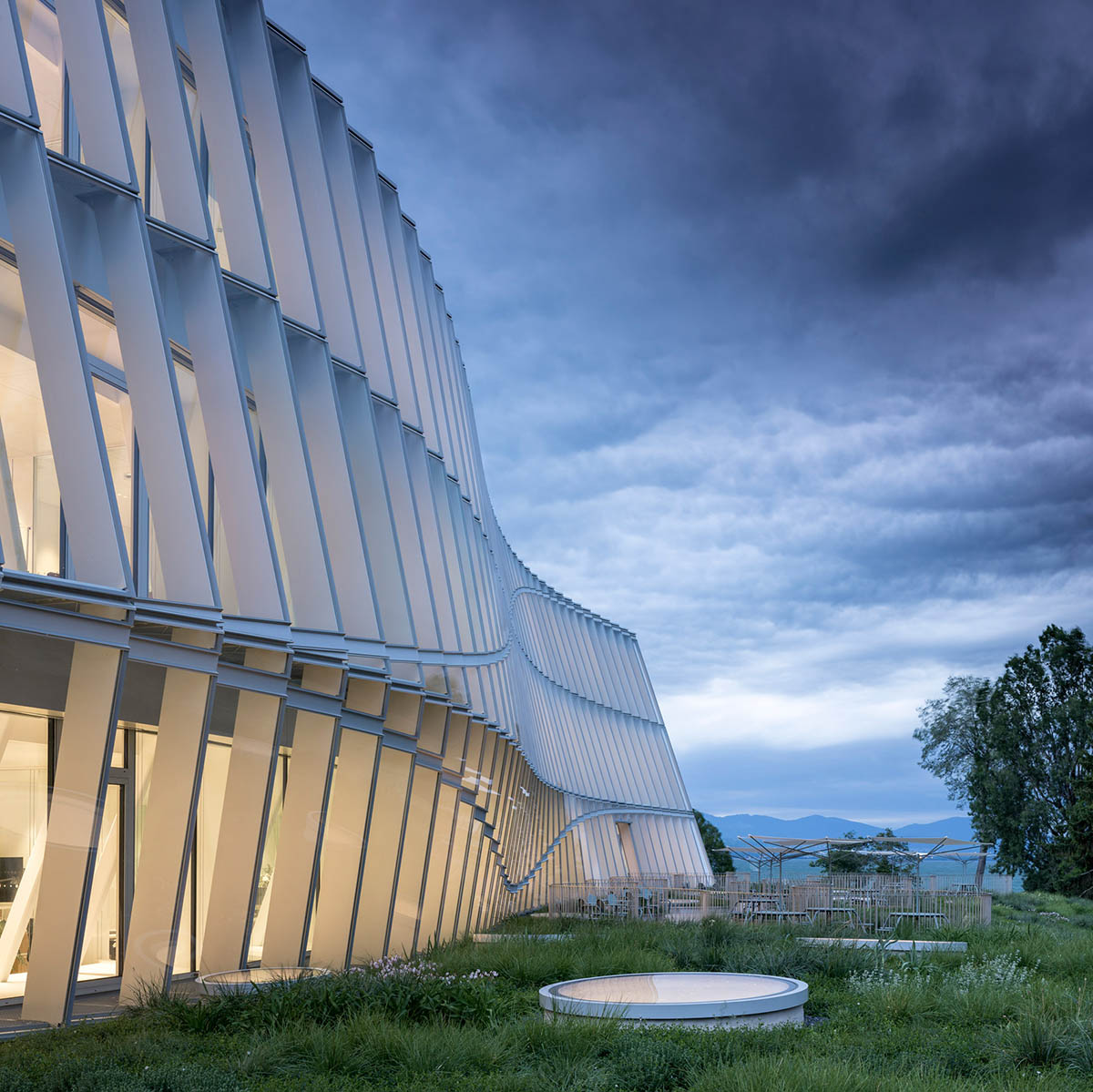 The IOC decided in 2014 to move ahead with the consolidation of its head office and 3XN was selected through a multi-stage, international architecture competition certified by the International Union of Architects and led by a jury of renowned architects. Following the competition, 3XN teamed with Swiss architecture firm IttenBrechbühl to oversee the construction of the project.

Following the IOC’s brief, Olympic House is formed around five key objectives: movement, transparency, flexibility, sustainability, and collaboration, each of which translates the Olympic Movement’s core principles into built form. 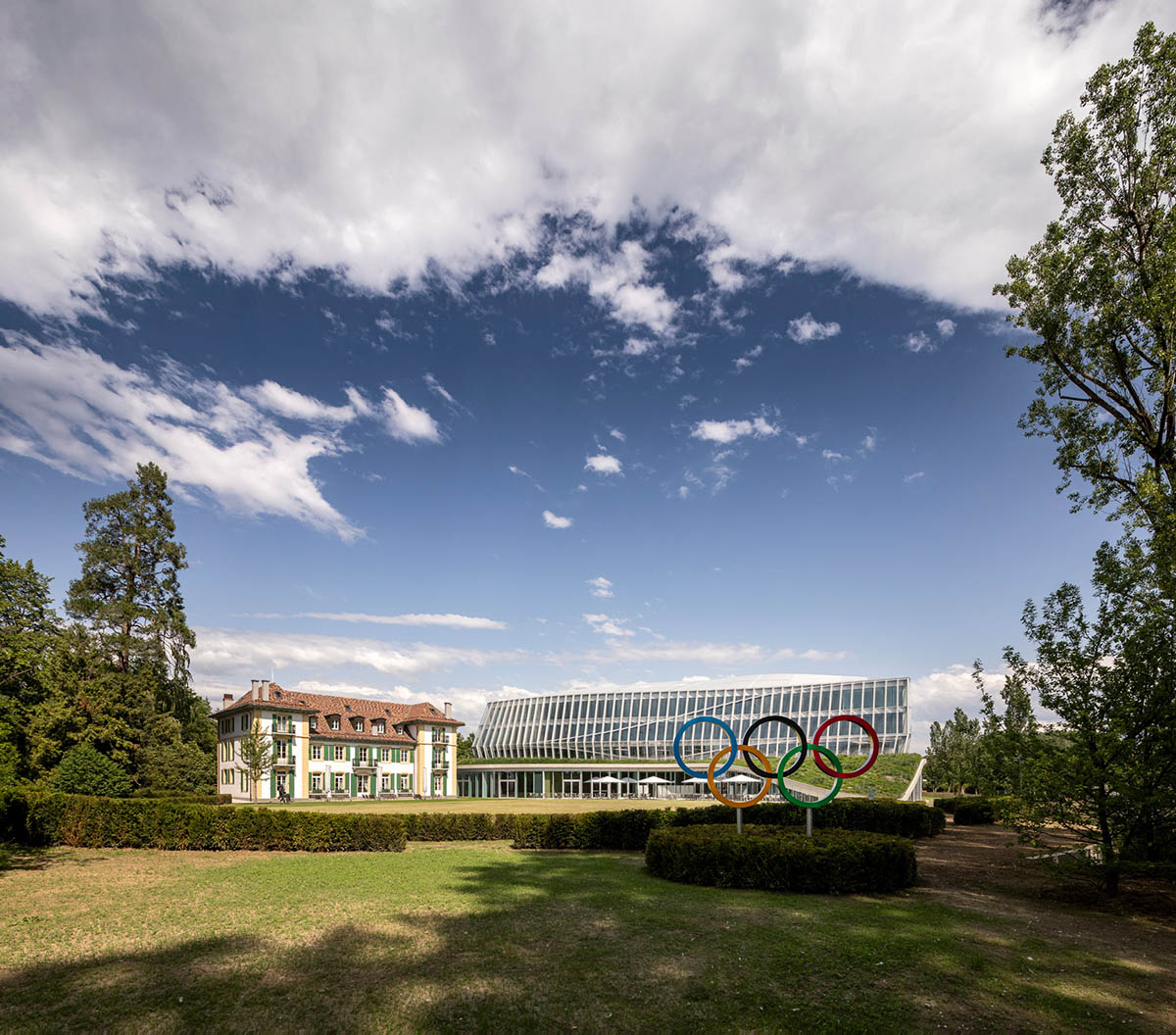 3XN's building authentically reflects Olympism, the Olympic Movement and the role of the IOC as a catalyst for collaboration in an iconic form.

"It was the essence of the Olympic Movement and its values that served as the basis of inspiration for the design," explained Kim Herforth Nielsen, co-founder and principal of 3XN.

"The Olympic House seeks to establish a quality working environment that brings together all the IOC staff under one roof. Our design prioritizes transparency and flow to facilitate and encourage interaction, communication and knowledge sharing, and to create a highly efficient and sustainable workspace." 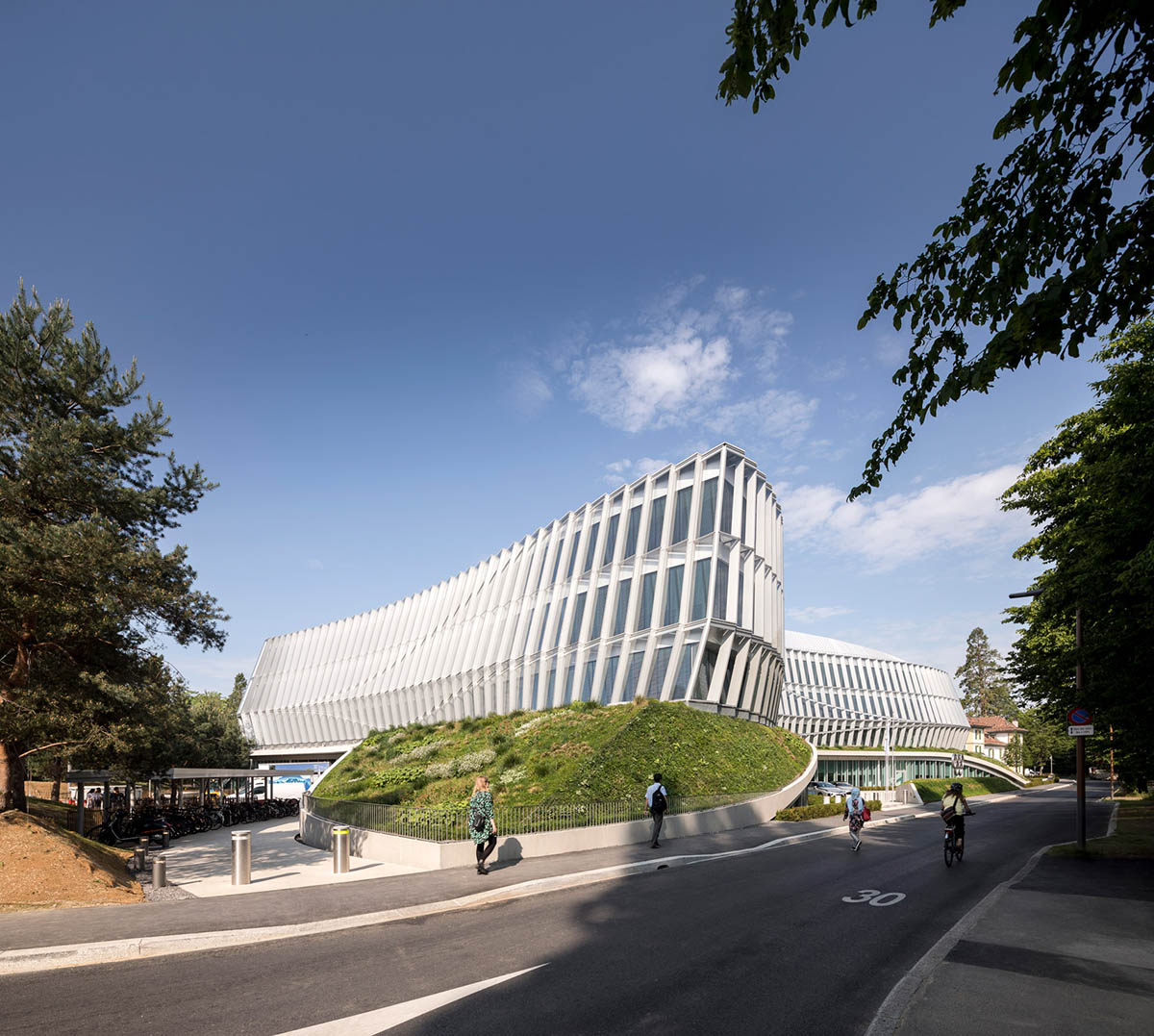 Olympic House is located in a public park, home to the eighteenth-century castle Château de Vidy, on the shores of Lake Geneva. 3XN approached the project with the intent to achieve the highest level of integration with the unique natural and historical setting while creating an emblematic architectural landmark for the local community.

The resultant design respects both the Château’s legacy and the park setting, establishing seamless transitions between the green public space and Olympic House. 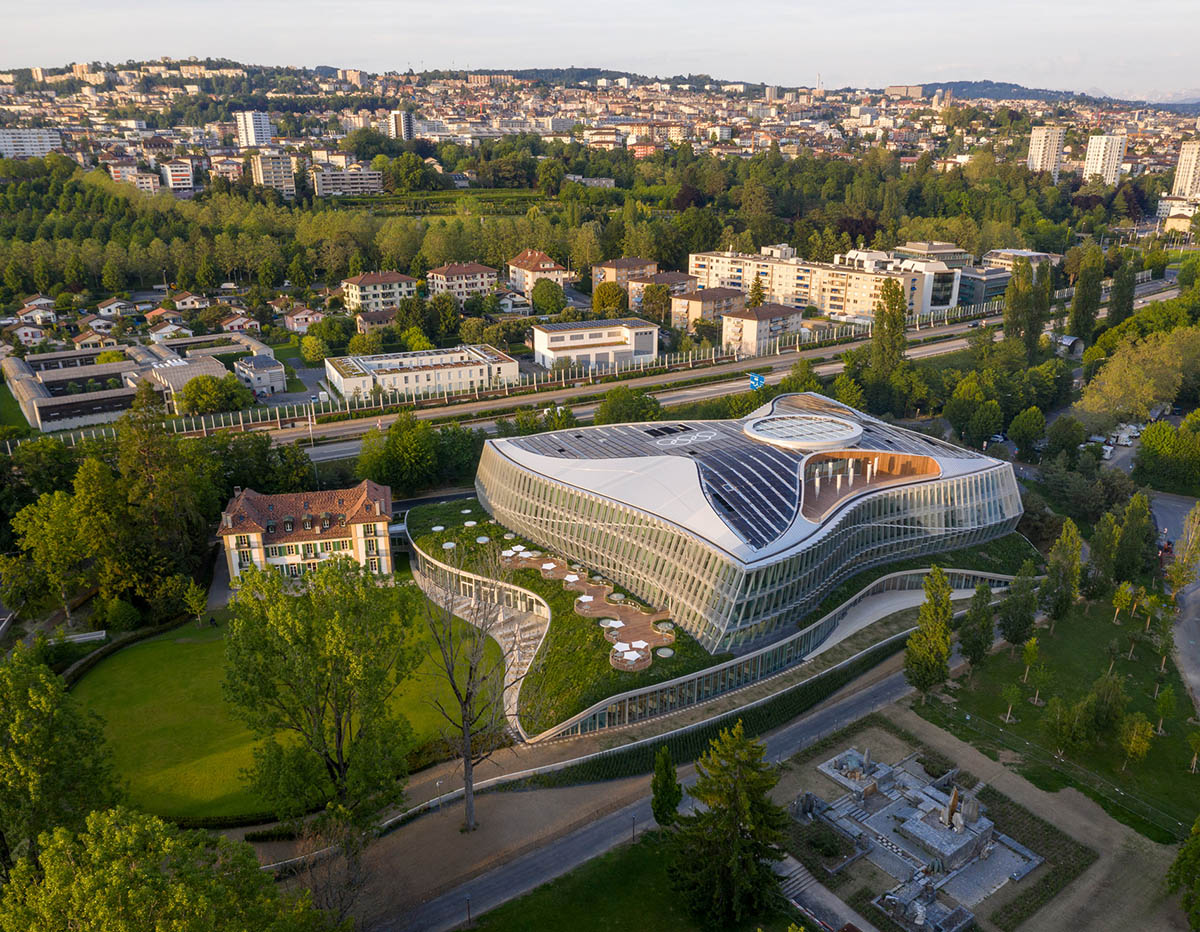 A hallmark of 3XN’s design, the façade pays tribute to the Olympic spirit by emulating the graceful movements of an athlete. The dynamic, undulating flow of the façade appears differently from all angles, conveying the energy of an athlete in motion.

In sports, movement leads to optimized performance; likewise, the formal manipulations of the building’s envelope have a direct effect on how it functions. 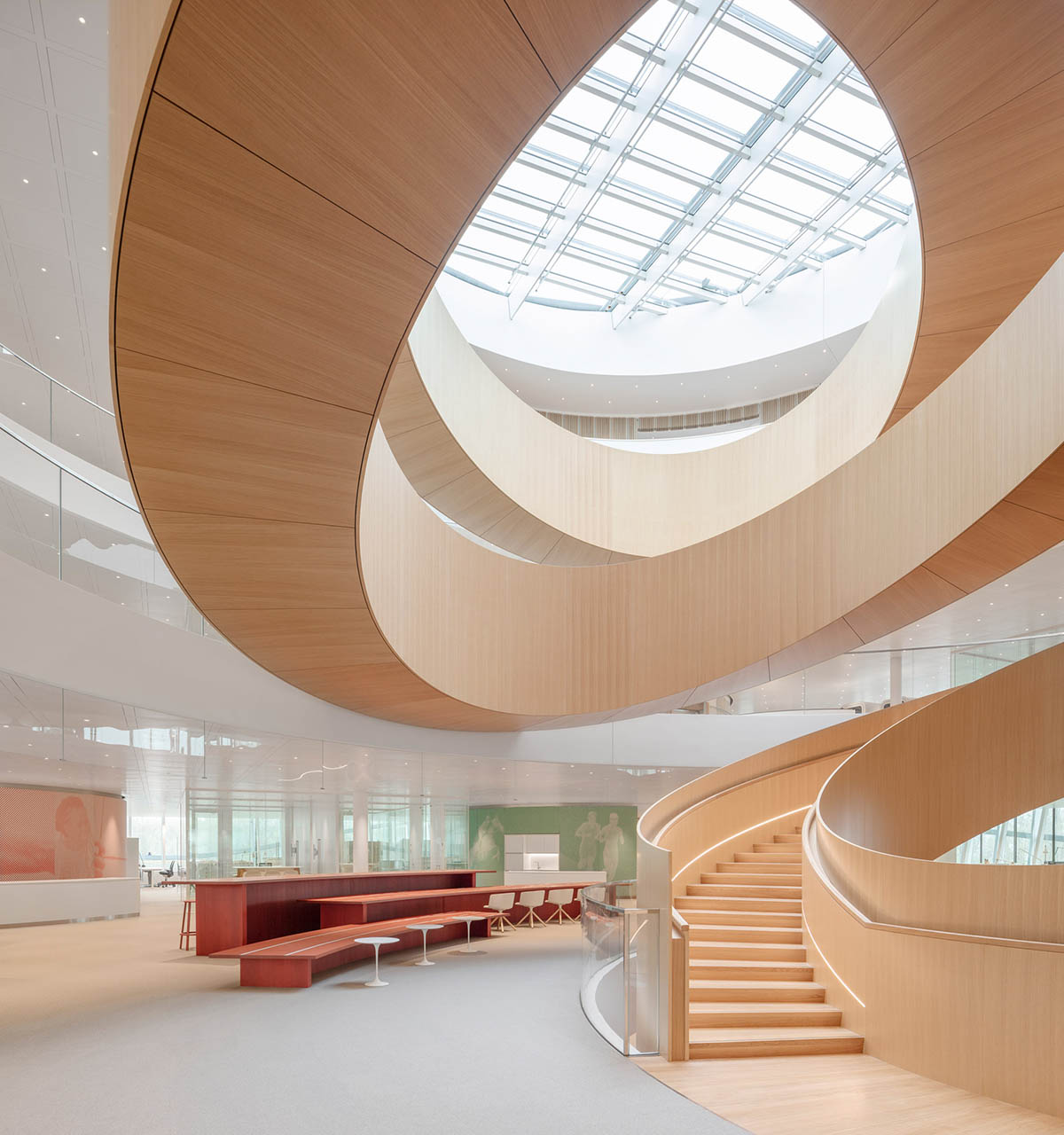 The Unity Staircase, which references the Olympic Rings, soars the full height of the building and connects the five floors through a central atrium. 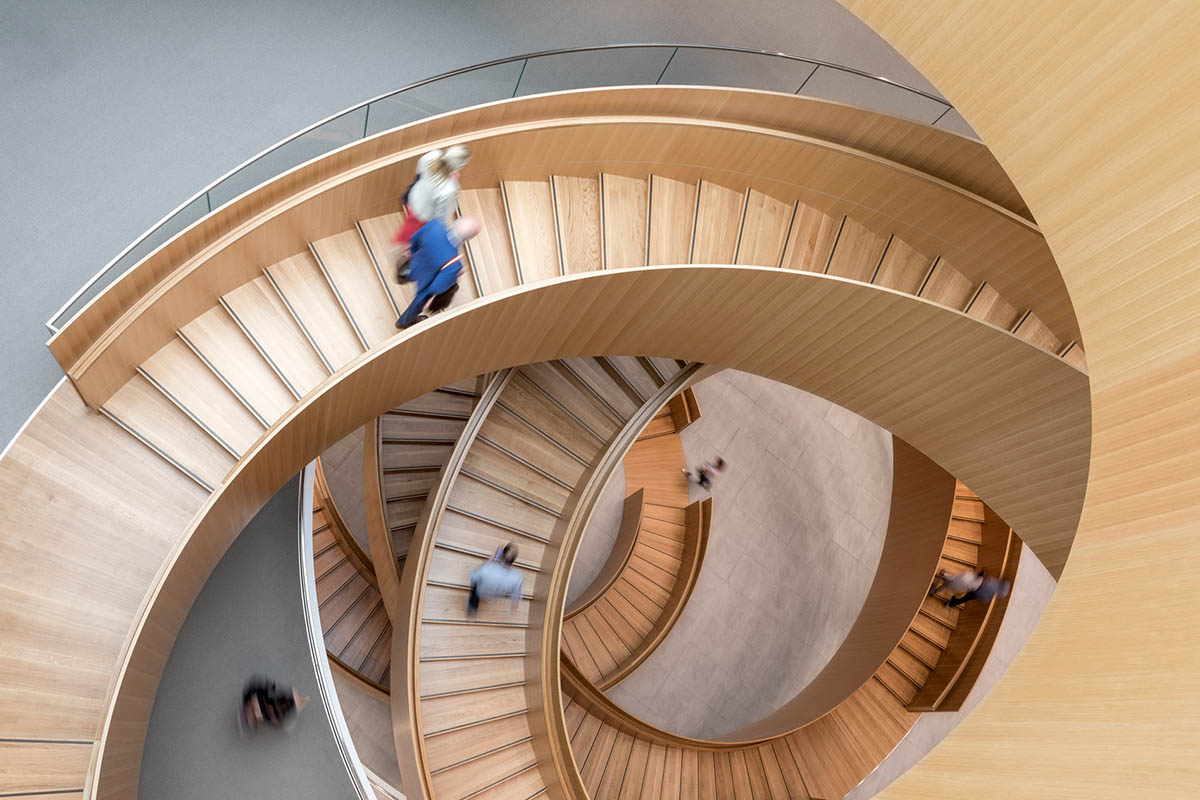 "The design allows the daily work and movements of the IOC staff to be visible through the transparent façade, reflecting the fair play and openness of the IOC," said Jan Ammundsen, partner and Head of Design at 3XN.

"Transparency becomes an important metaphor for the Olympic Movement’s responsibility, and the operation of the IOC as a global organization that promotes the values of respect, friendship, and excellence," added Ammundsen. 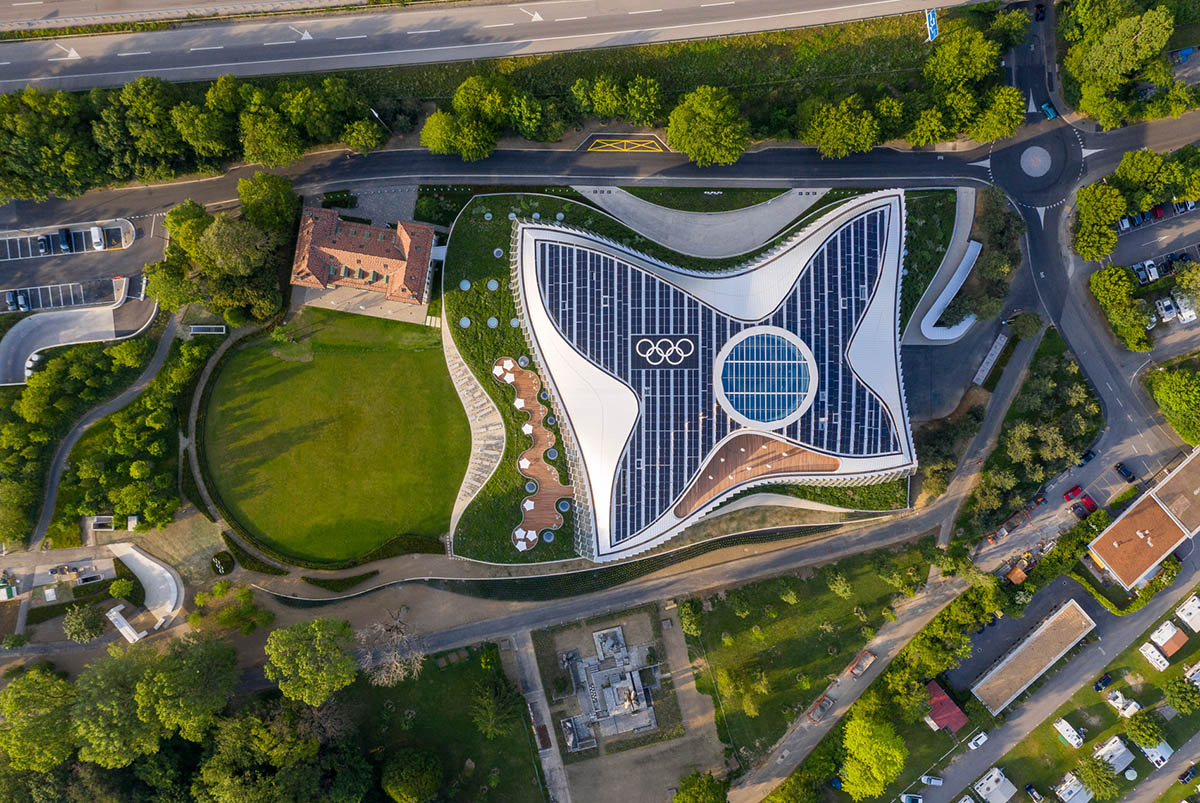 "More than an office building, Olympic House is a privately funded investment in sustainability," said 3XN. 3XN applied strong ambition to meet the most demanding sustainability standards both locally and internationally for the Olympic House.

Conceived as a sustainable building in terms of both construction and operations, the building includes special efforts to put into energy and water efficiency, waste reduction and landscape integration.

Innovative features that minimize the building’s environmental footprint, without compromising the quality of the workspace, demonstrate the IOC’s shared commitment to sustainability. Another important sustainability feature is the use of lake water through heat exchange for the heating and cooling of the building.

This strong commitment to sustainability is also reflected in the construction process. Olympic House is an exemplary paradigm of circular economy in construction: 95% of materials from the former administrative buildings on the site were either reused or recycled. 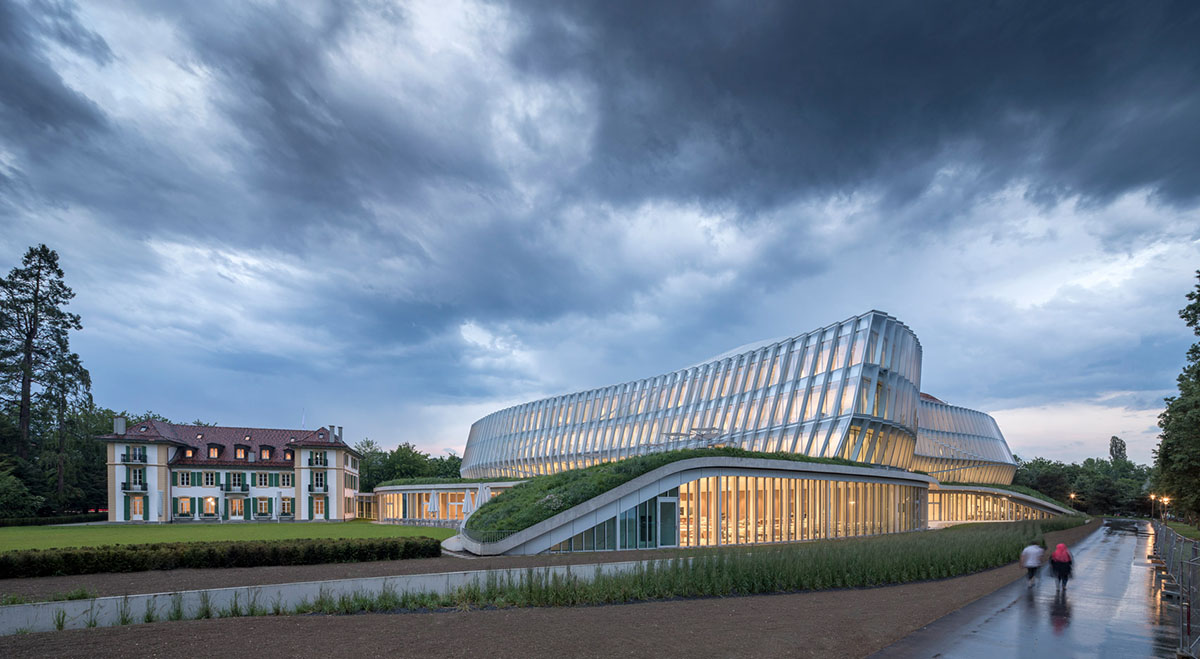 Additionally, Olympic House sets a unique example for innovative collaboration between different stakeholders, including the IOC, some of the Worldwide Olympic Partners (Dow, Toyota, and Panasonic), the architects (3XN and IttenBrechbühl), sustainability certification bodies, local authorities, suppliers and academics. 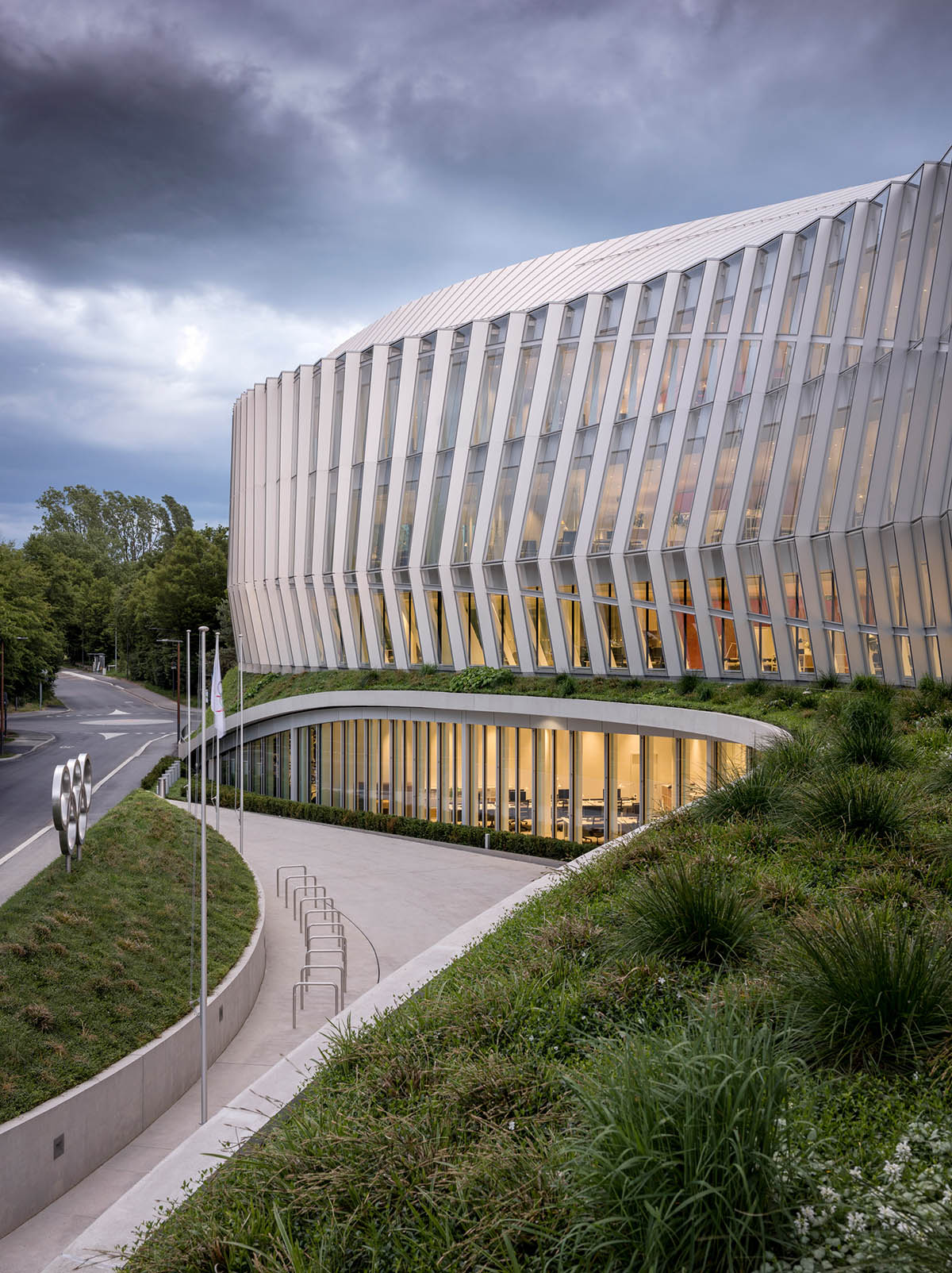 3XN Architects is a Copenhagen-based studio with more than 30 years experience. At the core of 3XN’s design philosophy is the principle that architecture, if done right, can shape behavior. 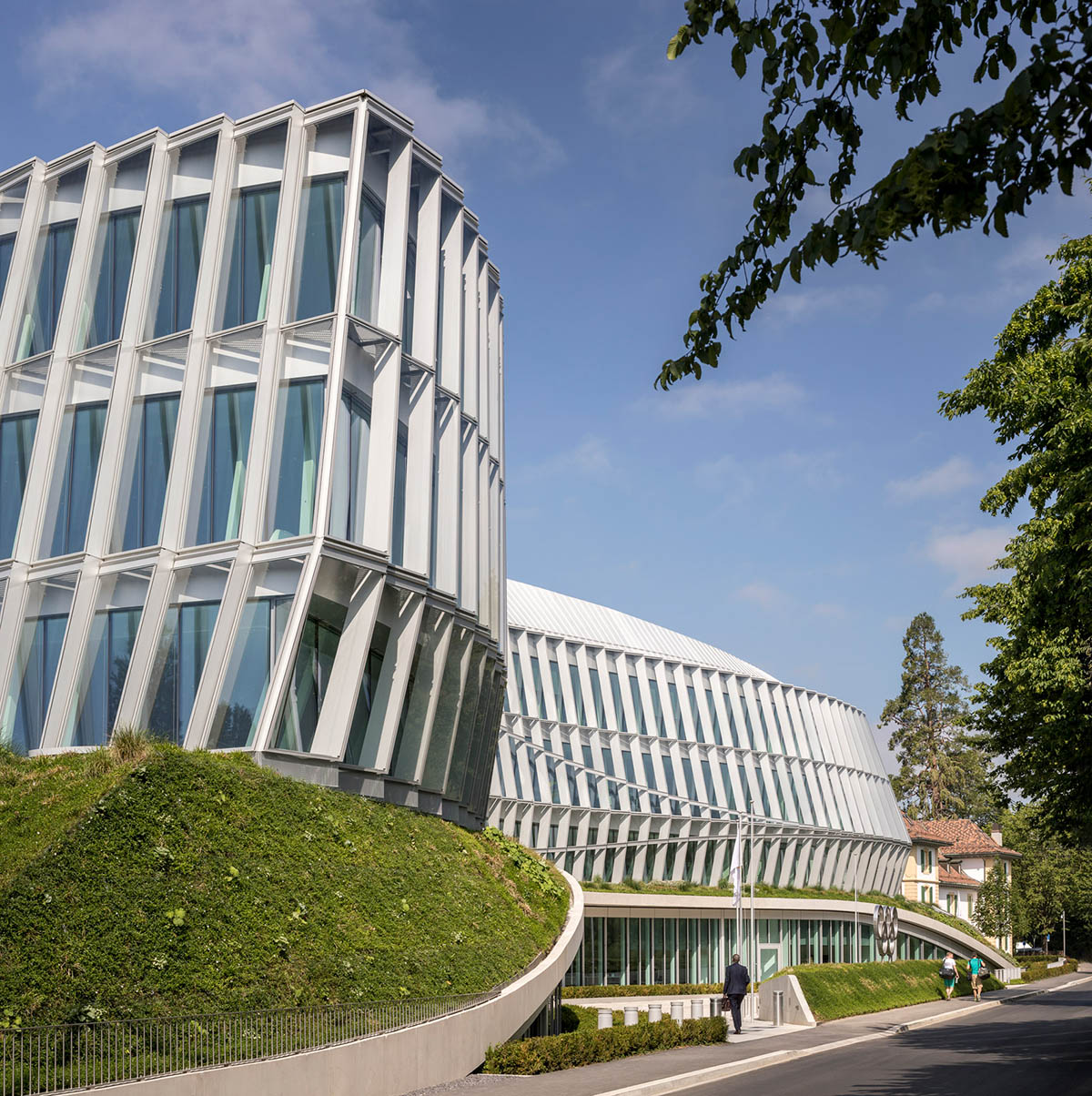 The International Olympic Committee (IOC) is a not-for-profit independent international organization made up of volunteers, which is committed to building a better world through sport.