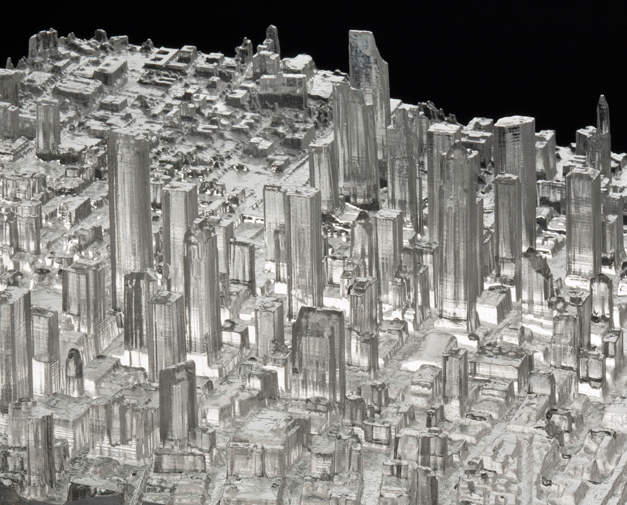 Norwood Viviano, Downtown Seattle (detail), from the Mining Industries series, 2014 Photo credit: Cathy Carver/Tim Thayer/Robert Hensleigh
The Way Station, 683 Washington Avenue (Prospect Heights)
@7:30 to 9pm
Satellite is back in Brooklyn on September 9 with more short talks about cities. This month, Satellite will hear about:
Mind-reading bike helmets
Designers Arlene Ducao and Josue Diaz III will introduce MindRider, a bike helmet system that tracks riders’ mental performance and maps their experience. Their team recently secured Kickstarter funding to create a map of New York City that can be used for bicycle and pedestrian advocacy and planning (among other things).

Sprawl
The fourth-largest metropolis in the United States, Houston hit its stride in the oil boom of the 1970s. It’s now one of the nation’s most sprawling cities, although there are signs that this might be changing—for better or worse. Curator and historian Susie J. Silbert will discuss the 2013 Houston Center for Contemporary Craft exhibition and lecture series SPRAWL, along with the work of Norwood Viviano, who uses LiDAR scanning, 3D printing, and glass to explore the impact and aftereffects of industry in Houston and beyond.

Passive design
Architect Ken Levenson, co-founder of 475 High Performance Building Supply, will speak about passive house, a method of design and construction that maximizes thermal comfort, indoor air quality, and resilience while reducing heating and cooling energy demand by up to 90%—an important tool for addressing the climate crisis.

Data and the street
David Fine will speak about Placemeter, a startup building a real-time data layer to measure street activity such as pedestrian motion and speeding cars.
> via satellitemagazine.ca