A Film On The Life And Architecture Of Laurie Baker Released 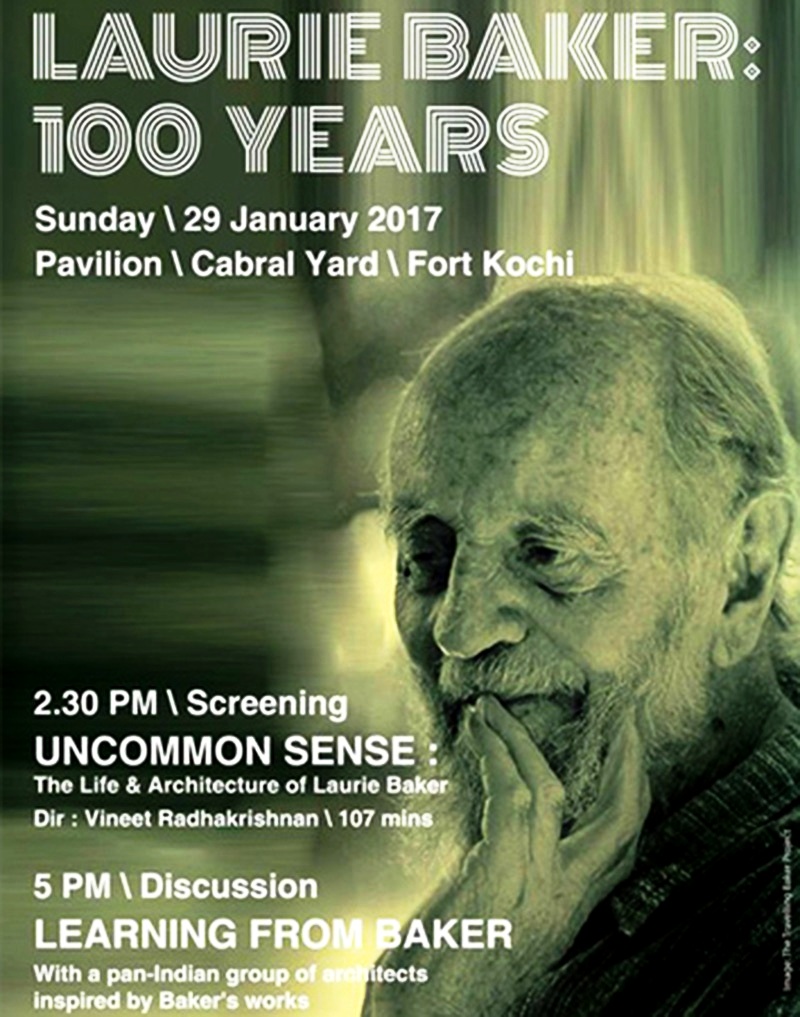 A documentary film titled, "Uncommon Sense: The Life and Architecture of Laurie Baker" has been completed and premiered at India Habitat Centre, New Delhi on February 4, 2017. The two-hour long film has been written, produced and directed by Vineet Radhakrishnan, a grandson of the saint-architect, Laurie Baker (1917-2007).

A British-born Indian architect, Laurie Baker was aptly described as, "Gandhi" and "God of the Poor."

Laurie Baker graduated from the Birmingham Institute of Art and Design with architecture. He moved to India in 1945, and was initially a part of the World Leprosy Mission, which aimed at the conversion of once used asylums into hospitals which would shelter the people suffering from the disease.

Mahatma Gandhi once told Baker that his knowledge of western architecture would be of very little help in India, where the rural areas needed more attention than the cities.

Gandhi gave Baker his idea of building houses, saying that the materials needed to build a house should be acquired from within 5 miles of the site. This idea was to have a great impact on the architect's life a few years down the line.

During his architectural career in India, Baker became renowned for building beautiful houses with local materials. These low-cost houses were aimed at clients from the lower class and the lower-middle class. To further spread awareness about cost-effective housing in India, he founded the Centre of Science and Technology for Rural Development at Thrissur, Kerala. The Government of India recognized Baker's outstanding contributions to the country's architecture by awarding him the Padma Shri in 1990.

"Uncommon Sense: The Life and Architecture of Laurie Baker" explores both the personal and the professional storyline of the architect. Baker's philosophy was more a way of living than just a way of building. He didn't advocate simplicity while designing, and then lead a lavish life.

The writer, producer and director of the film, Vineet Radhakrishnan is a grandson of Laurie Baker. He is a professional photographer with over 10 years of experience in India, France and United States. He holds a master degree from the Indian Institute of Technology, Delhi, and an MBA from INSEAD, France.

He left a plum management job in London five years ago, to give shape to his dreams, of making a documentary on his grandfather. It took him four years to complete the film. During this period he travelled a lot across India to see and document Baker's buildings, and interviewed many of his clients and friends.

About this film Vineet says, "I decided to shoot the buildings myself as the buildings were also important characters for the film; what they said collectively and it was crucial for me that to take time to understand each one of them; the constraints, the story of the client, peculiarities of the design and so on. I had, sometimes, to wait for the best light or for rain to shoot, for instance, water harvesting channels in some houses."

On naming the film the 'Uncommon Sense'  Vineet says, "If you look at my grandfather's architectural principles, a lot of what he was talking about was common sense, but people rarely practice them. Hence the name "Uncommon Sense: The Life and Architecture of Laurie Baker."

The film has been screened at India Habitat Centre, New Delhi on February 4, 2017, and at the Kochi-Muziris Biennale on January 29, 2017.

Further information about the film can be seen from the website.