Architecture Fringe 2017- Infrastructure: New and different voices in the structure of anything 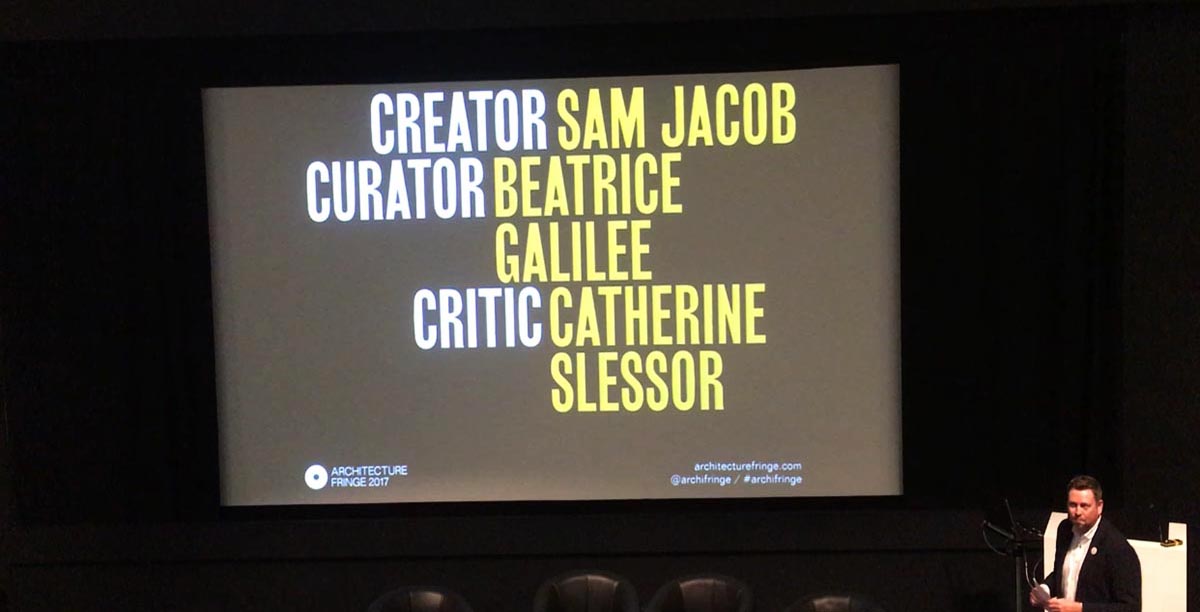 Architecture Fringe 2017 has ended up after many workshops, events and projects with almost 260 independent contributors. "While the concept of 'infra' aimed to introduce new and different voices, together with the theme 'the structure' can be anything such a discipline, people and physical place," said Andy Summers in the welcoming speech of the closing lecture. 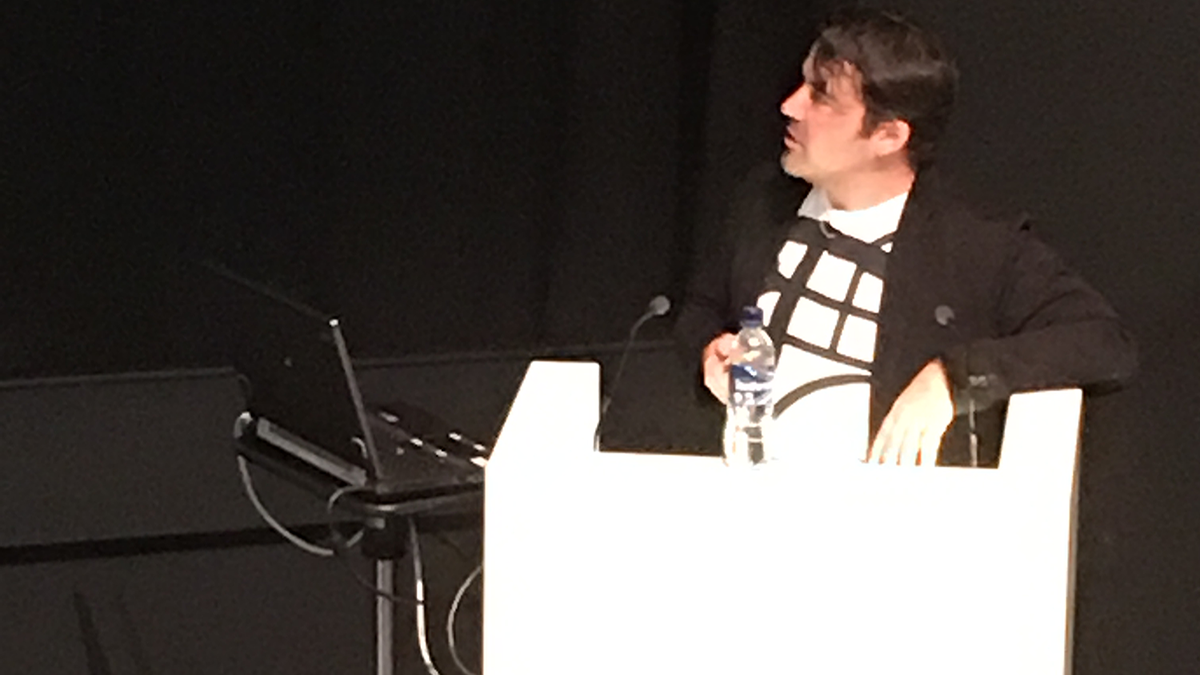 Sam Jacob’s opening talk has addressed "the problem of being architect" and "How To Be A Modern Architect". He introduced his 10-stepped list of being an architect; "because architecture is not anymore like in the past, which is now far more difficult and complicated than we are thinking of," said by Jacob.

He pointed the first step as "First Design Yourself", which means that constructing first who you are in the architecture." He asked; "what architecture is and what architecture does in the world, since it is not just constructing buildings but how it involves in the real world." While he objected 'the traditional idea of architecture' that it designs buildings, it is a cliché, he claimed that "Architecture Is Everywhere" in his second step, since "architecture literally is everything in the world, like arts, making installations, an infrastructure of city life, relationship with the artist, a relationship of audiences, reconstruction of art work, even making a cushion", he concluded.

For how do we construct our own sense of discipline and what architecture should be, he answered as: "This Is Through The Freedom Of Discipline" in the third step. "Architecture is discipline that requires a different discipline, because of the fact that you can't just design stuff but be your own critic, theorist, curator, even you are designing", according to Jacob. 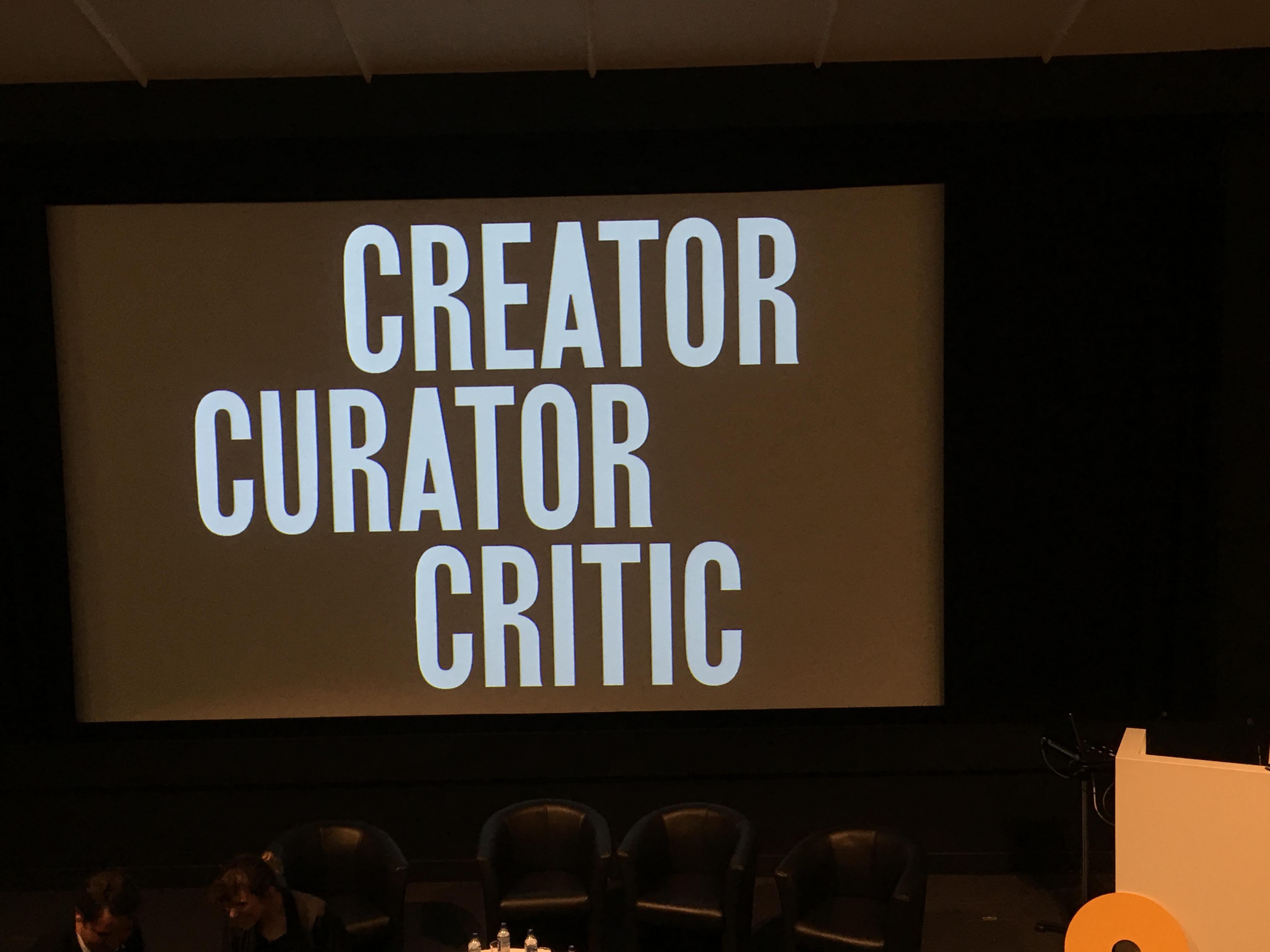 Although focused on the discipline of the self and architecture profession, it is not limited with that, since "all works are for clients and admired that the best ones are imaginary" in his fourth step. Following that he said, “Learn How To Pick Locks," that he considered how to use imagination to drive architectural projects, from a building to a critic, or many other real life situations. However, "how to invade the two world: imaginative sphere and the sphere of the world."

Jacob highlighted that "Architecture Occupies Time As Well As Space as an opportunity" in his sixth motto given the fact that; "architecture is an endless appeal to the eternity." Whilst, he suggested "a kind of Buddhist view of Giving Everything Away" in his seventh step by engaging many other on architectural things, like blogging, teaching etc.

Believing that "being an architect is not just constructing since Ideas Are The Product Of Architecture" in his eight step, Jacob pointed not only buildings but publishing, drawings and paintings as the products of architecture. Therefore, the ninth step, which is the fundamental thing for him is "All Architecture Is Representation as such; drawing, idea, text, thing, room, place, situation, event, building, place, city."

All in all, he warned in trusting 10-stepped plans, "since this is his semi-autobiography, which helps him his way of doing architecture," said Sam Jacob, since "we need to invent to construct our idea of architecture rather than simply accept the predetermined ideas on architecture." 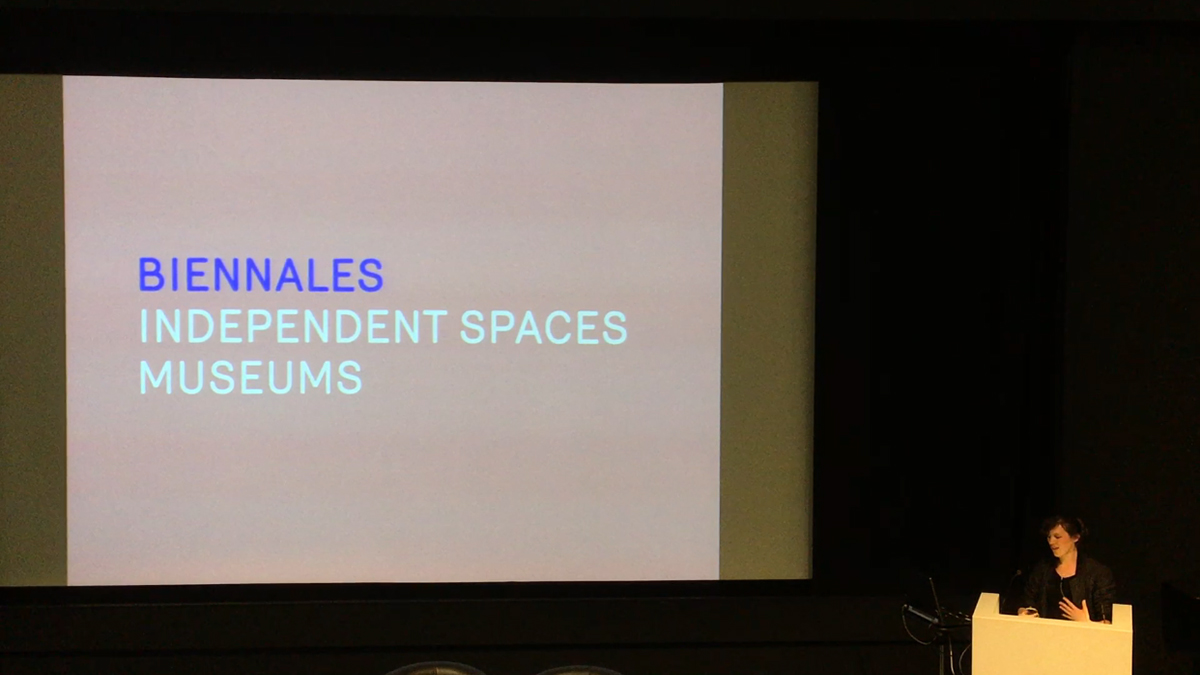 "Biennales, Independent Spaces and Museums" were emphasised during Galilee's presentation. The word, "exhibitions", doesn’t seem the only fit to describe her works because she tried to show "what type of architecture is done through her works and what a curator should do."

Her exciting experiences in Shenzhen, Hong Kong Biennale 2009, marked her curatorial work "even using the idea of Biennale how the citizen of that city get together and get to know each other better," under the theme of "city mobilisation" and city branding exercises of Shenzhen to become a cultural place.

"A platform where people ask questions on the web site and their answers are shown around the city had the idea of using public space as part of the graphic identity of the project" in her next curatorial project in Lisbon Architecture Triennale 2013. Following her Biennales, she showed the examples of "exhibitions, random projects, festivals, talks etc." which she defined as "did crazy experimental stuff" in an independent space of a restaurant space in London.

Along with her desire to institutionalize more, she started her architectural curator works at the Metropolitan Museum of Art (MET). She highlighted some of her projects as, one of them is, "Wolfgang Tillmans: Book for Architects", which was a perfect exhibition; whilst artist looking architecture through his eyes.

Last but not least, Galilee is organising a series of projects, particularly, her current project titled "In Our Time" held at the Metropolitan Museum of Art on November 12, 2016. Through a dozen of architectural events and discussions, she tries to communicate architecture with the public. She welcomes everybody, and the next one will be held at 9th of December, 2017 in New York, she announced. 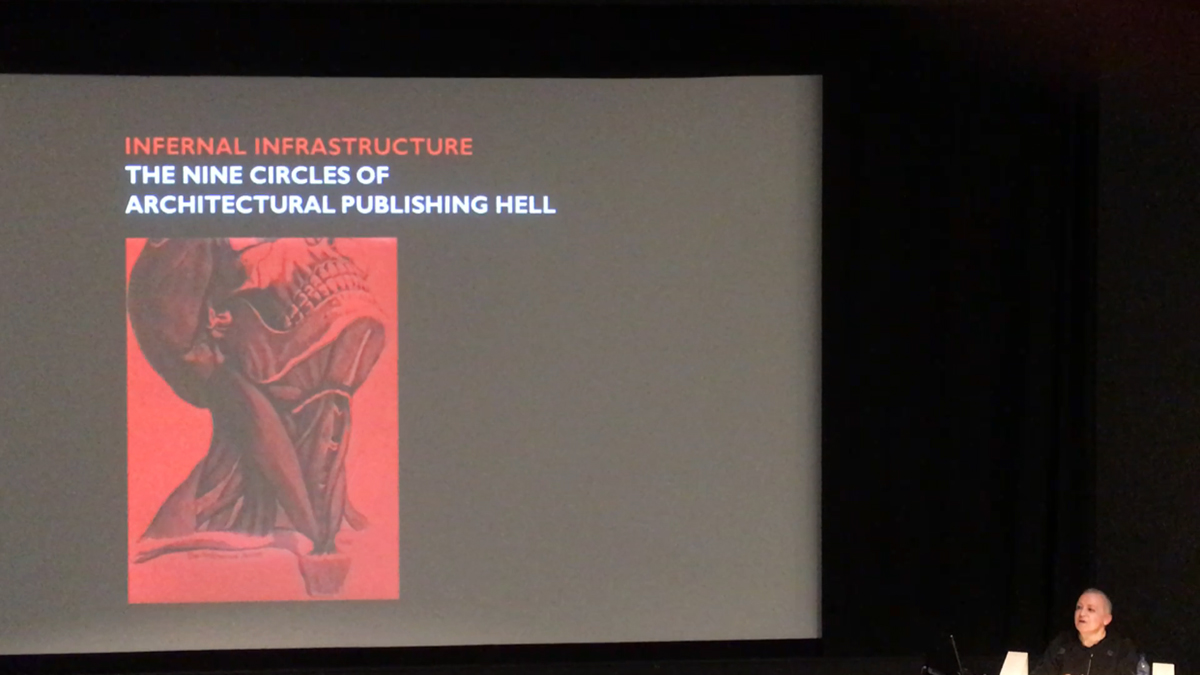 Being the third talk of series but end of the fringe talk, she introduced her awakening introduction for her desire of "a grand final, in which she would like us to join the hell." Since the subject of the festival theme was infrastructure, she linked it what she is doing and asked: "how architecture critiqued, published and disseminated?"

Structured along with Dante's Divine Comedy and the Nine Circles of Hell metaphor, "the things get progressively worse as you get further in by the gravity of the sins," said Catherine Slessor and she "explored the hellish structure of architectural media and much more."

"The Magazine Floggers", with her description in the first circle, pointed the shifting terrain of online media over the printed one and discussed the new way of representation and readdressing these changes for traditional printed media. "Tougher criticism might be a start," she said and continued that "the cultivation of long journalism, which still works better in print than online that also help them to risk a new critical relevance."

Though having said that, she listed both "The Newspaper Boys" in the second circle, who are named as critics - and all gentlemen - having various titles dispatched on new buildings and developments and "The Academic Bores" and since it is the publishing of most obscure books and articles, she emphasized that they are never read by anyone but published for the rank credits from prestigious universities. "Peddling Architectural Award" of conventional publishers in the fourth circle, is  "downsizing the architectural critic because if something is given as an award, it should be good you couldn't criticise," said Catherine.

"The Professional Charlatans" and "The Snake Oil Salesmen" in the fifth and sixth circles, are not always ended up with good results, while the former may cause more marginalised architecture by non-professionals and consistency with the public perception of architecture via programmes, publications, awards. "The latter becomes worse if an architecture is related to more productions of architectural public relations," according to Slessor.

Since "architecture democratized by digital world and delivery, everyone can be architecture critic," she stressed. However, "The Internet Fraudster" for her is because of the "image shifting landscape, in which the images pixilated, manipulated, sacculated, ultimately relocated" and finally, "architecture became meaningless and commodified."

She put “The Vanity Publishers” in the eighth circle due to their "flattery, manipulative and exploit characteristics which have nothing relate with the truth," before finalizing the circles with "The Televisual Boulevardiers," which she claimed that architecture deserves better architectural programmes. 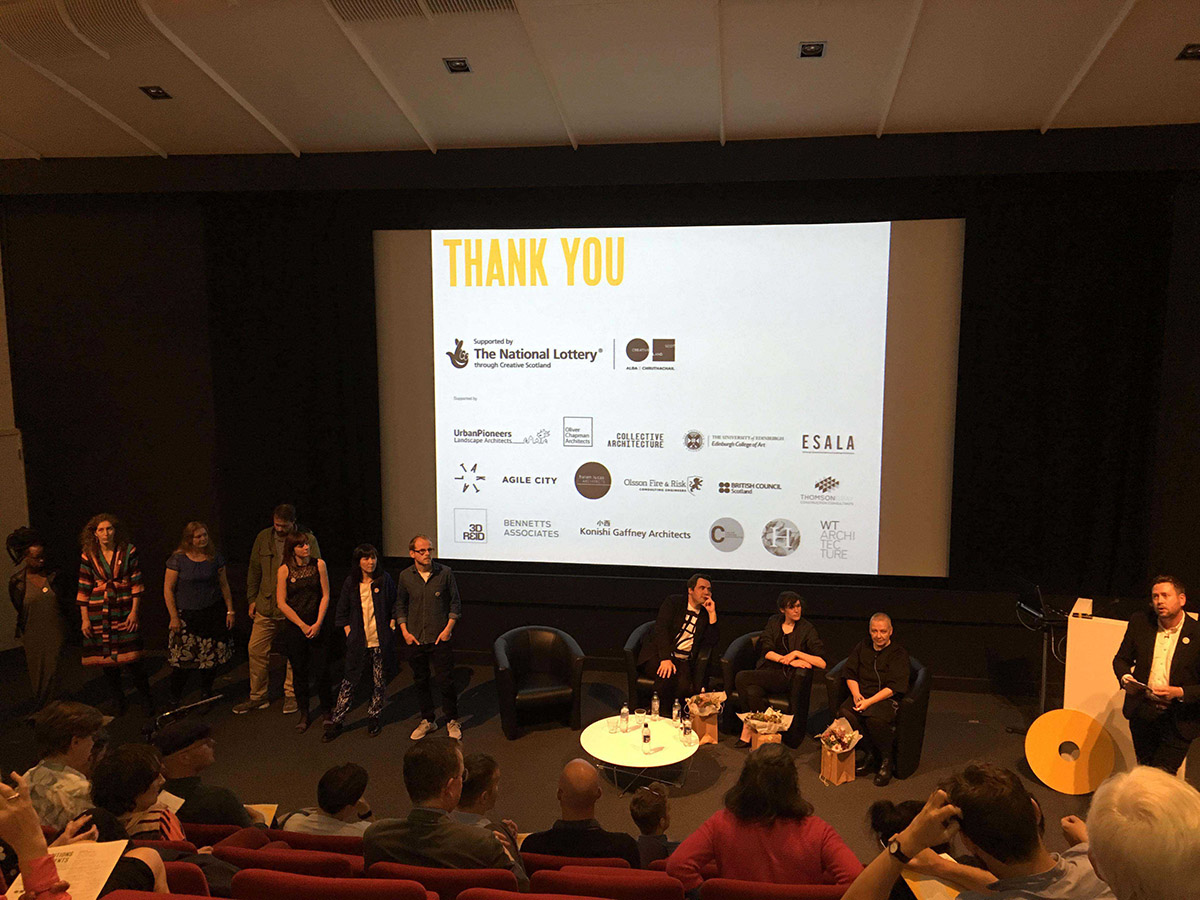 Architecture Fringe completed this year's program with 260 contributors, 50 projects, in 37 venues, a series of events were held between 1-23 July in Scotland. This was the second edition of the event.