An Ode To Shivnath Prasad: The Le Corbusier Of India 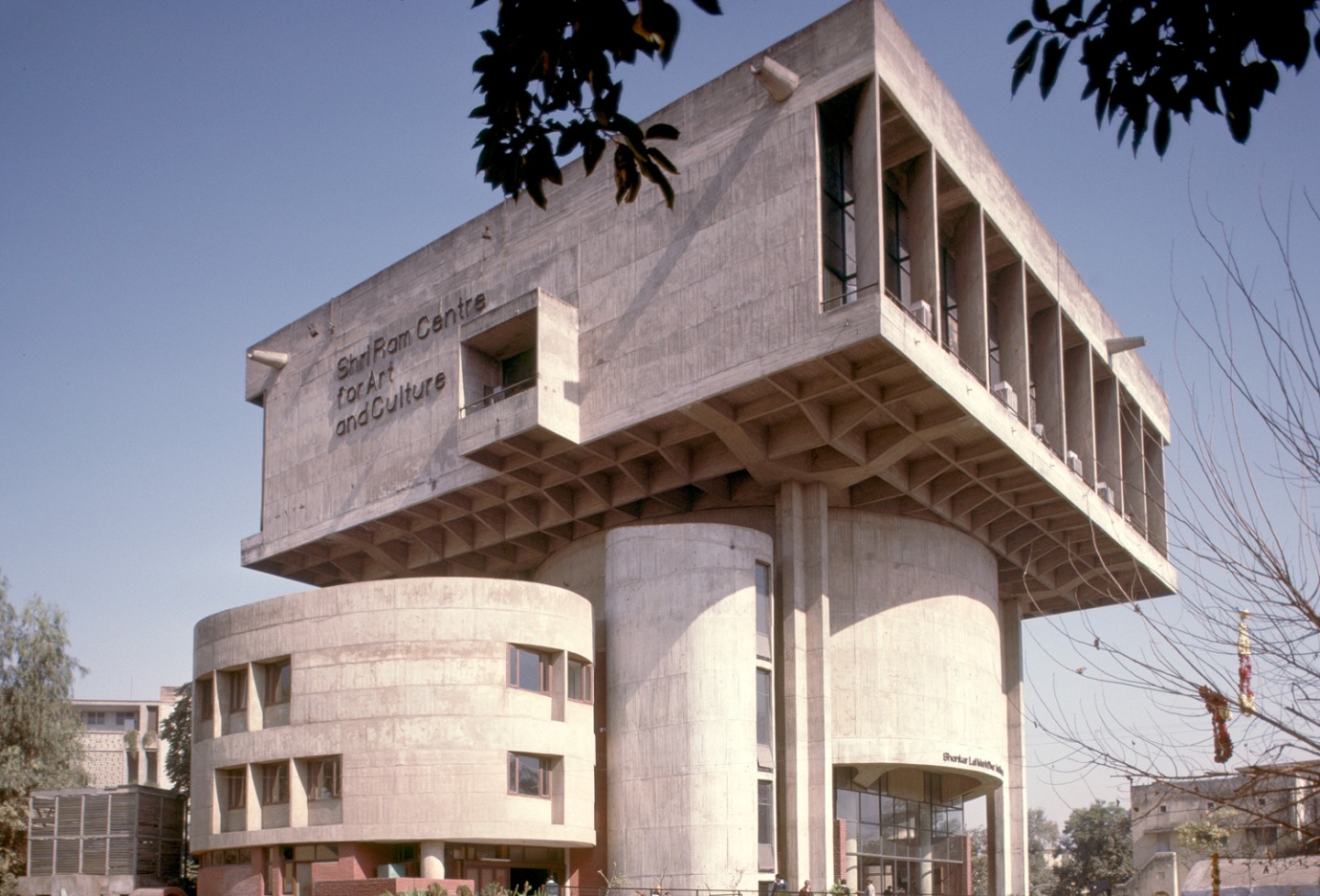 Any discourse on modern architecture in India will be incomplete without mentioning the name of Shivnath Prasad, the giant of Corbusierism in India. What is remarkable about Prasad's work is that he was an architect who never worked with Le Corbusier on any project, anywhere, but still absorbed his theories to such an extent that the buildings he produced from his small studio in Delhi in sixties, can be said to bear the signatures of the master himself.

Charles Correa reverently equated the relationship between Le Corbusier and Shivnath Prasad with that of the great archer Dronacharya and his disciple Eklavya in the Indian epic of Mahabharata who had perfected the art of archery without even meeting his guru. Eklavya used to made a clay image of the master and everyday he practiced in the forest in front of the image, imagining that the great Drona was watching him. Likewise, Prasad had never been anywhere near Le Corbusier. He seems to have picked up the idiom by a process of osmosis. But he has mastered more than just the vocabulary; in all his work there is a poetic impulse which would do credit to the guru himself. He used to work with one or two assistants and made all the drawings himself. His output is really as personal a product as a piece of handicraft or handloom. There are a number of buildings designed by Prasad which owe a formal debt to the Corbusian school of thought. 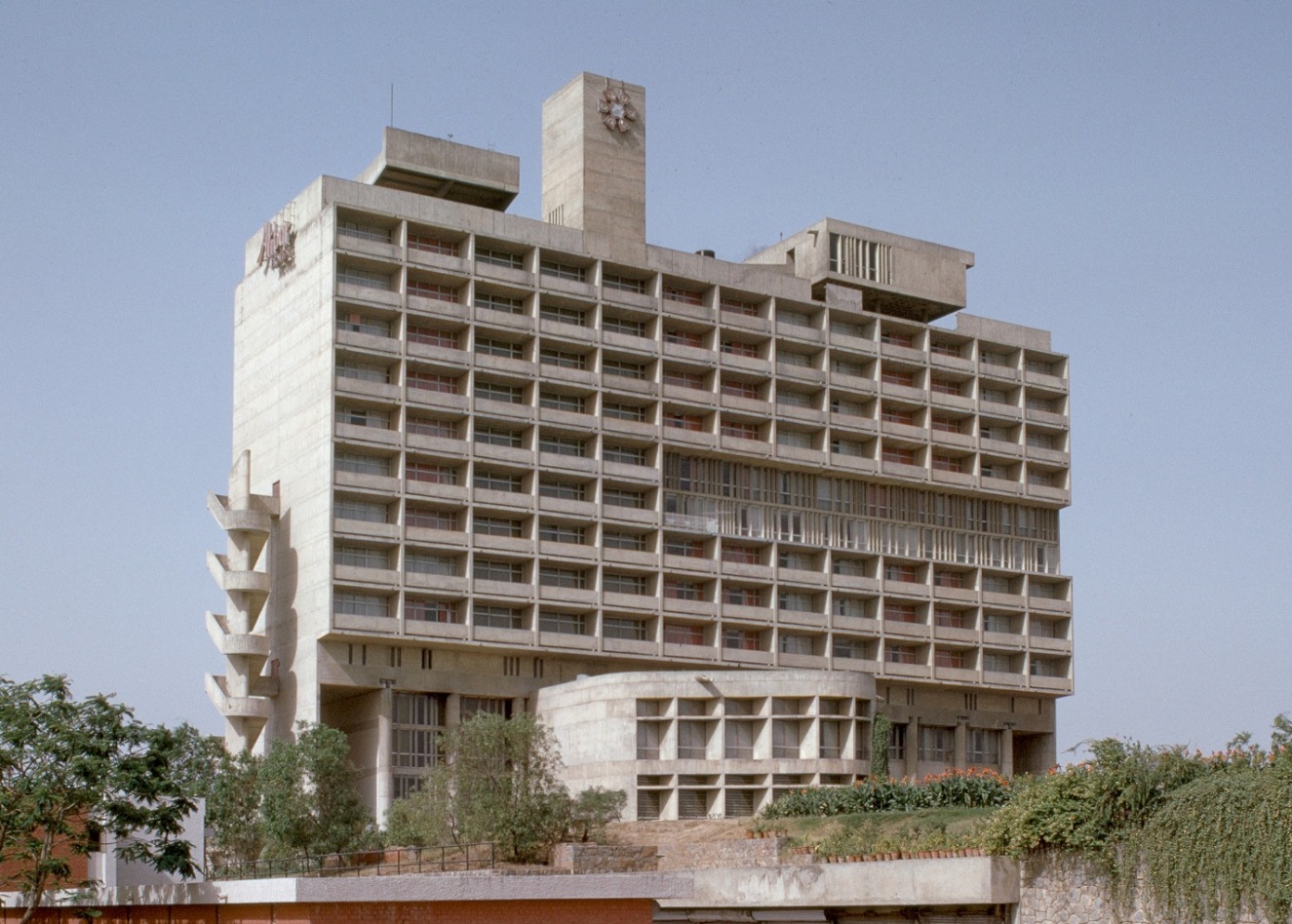 Prasad's thirteen-storied Akab Hotel (1965-69), now an office building, is reminiscent of Le Corbusier's  Unite d'habitation. It is a reinforced-concrete structure with a truthful expression of form-work and natural concrete finish. All the typical Corbusian architectural features like the brise-soleil, the truthful expression of service floor on the facade, the roof terrace elements, and an exposed staircase at the far end, are visible in the built-form. In context of his alliance with the master's design concepts, Prasad proudly admitted, "When I was introduced to architecture at the age of 16, it was a major switch from the high school. I was lost. One day glancing through the library books, I came across some works of Le Corbusier. But still not understanding anything, I was fascinated by his works, compared to others. And when I look back - it must be the purity of his decisions, simplicity of his spaces, the clarity of everything else. I carried those images for many years through college, and when I opened my small studio that influence had still lingered on" (As stated in a note for an Exhibition of his works at University of Illinois in 1987). 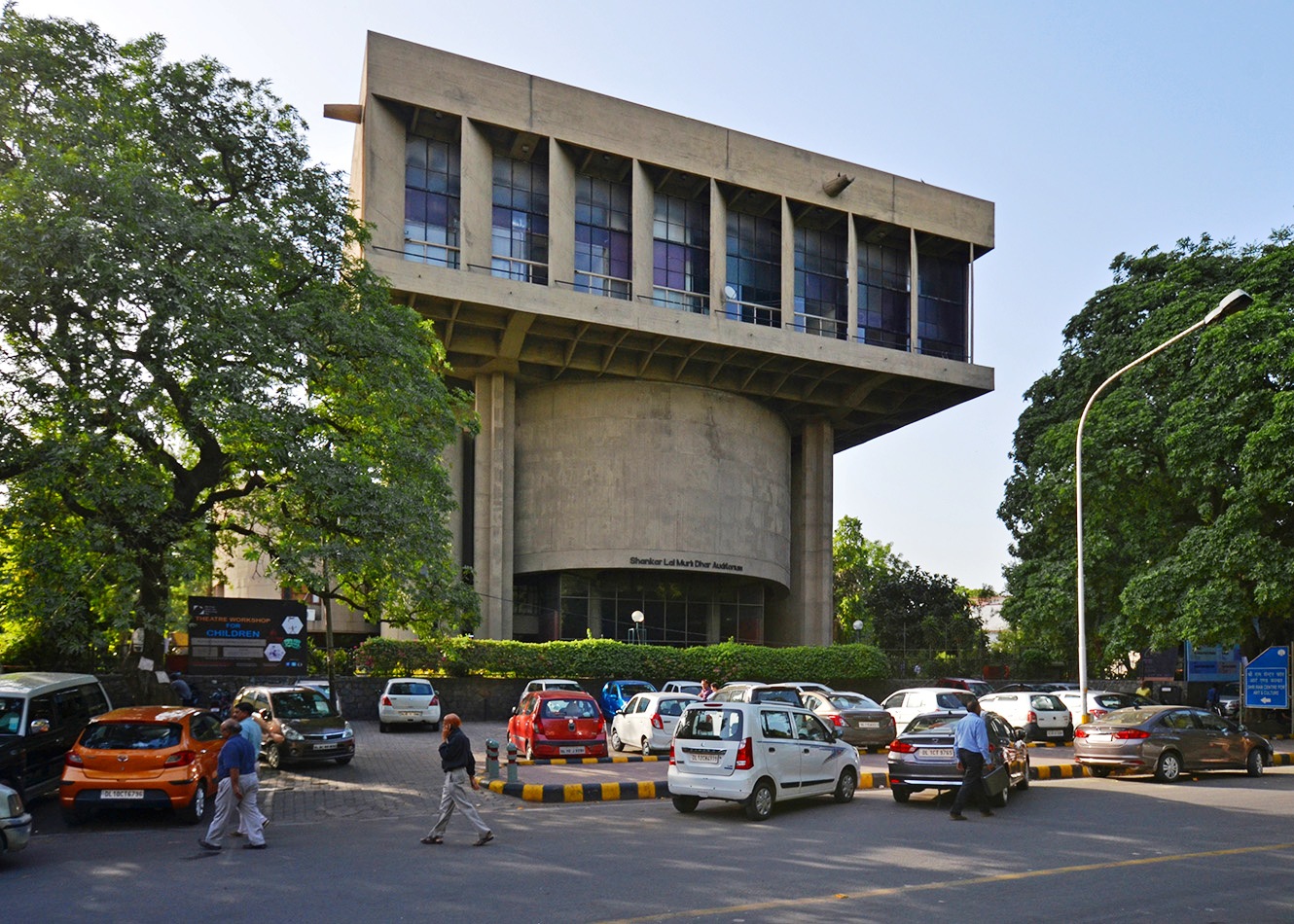 True to his statement, this influence was apparent when he later designed the famous Shri Ram Centre for Performing Arts (1966-69) in New Delhi. This is a unique illustration of Corbusier's influence on modern Indian architecture. It is located on a 0.25-hectare site in the heart of the capital, adjacent to other cultural institutions. The centre was set up by a private trust to promote the performing arts of India. 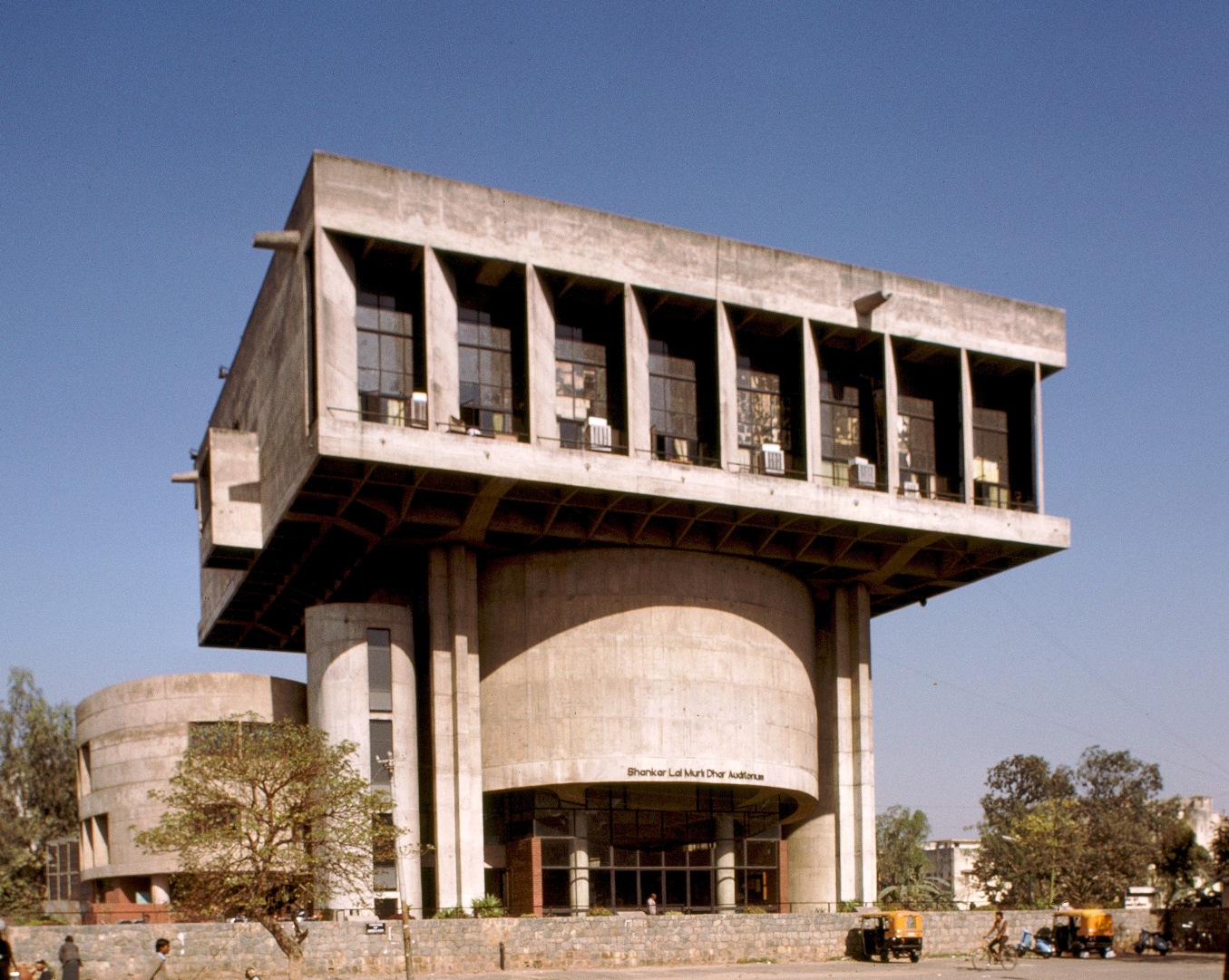 The design of Shri Ram Centre satisfied function-intensive requirements on a small site. The architect conceived individual functions at different levels, using distinct forms bound together by independent structural supports. At the ground floor, space enclosure has been kept to a minimum and spaces flow out to natural greenery and sunshine. The cylindrical shaped main auditorium, with a seating capacity for 600 persons is on the first floor. It is supported on circumferential and radial beams cantilevering out from six columns. 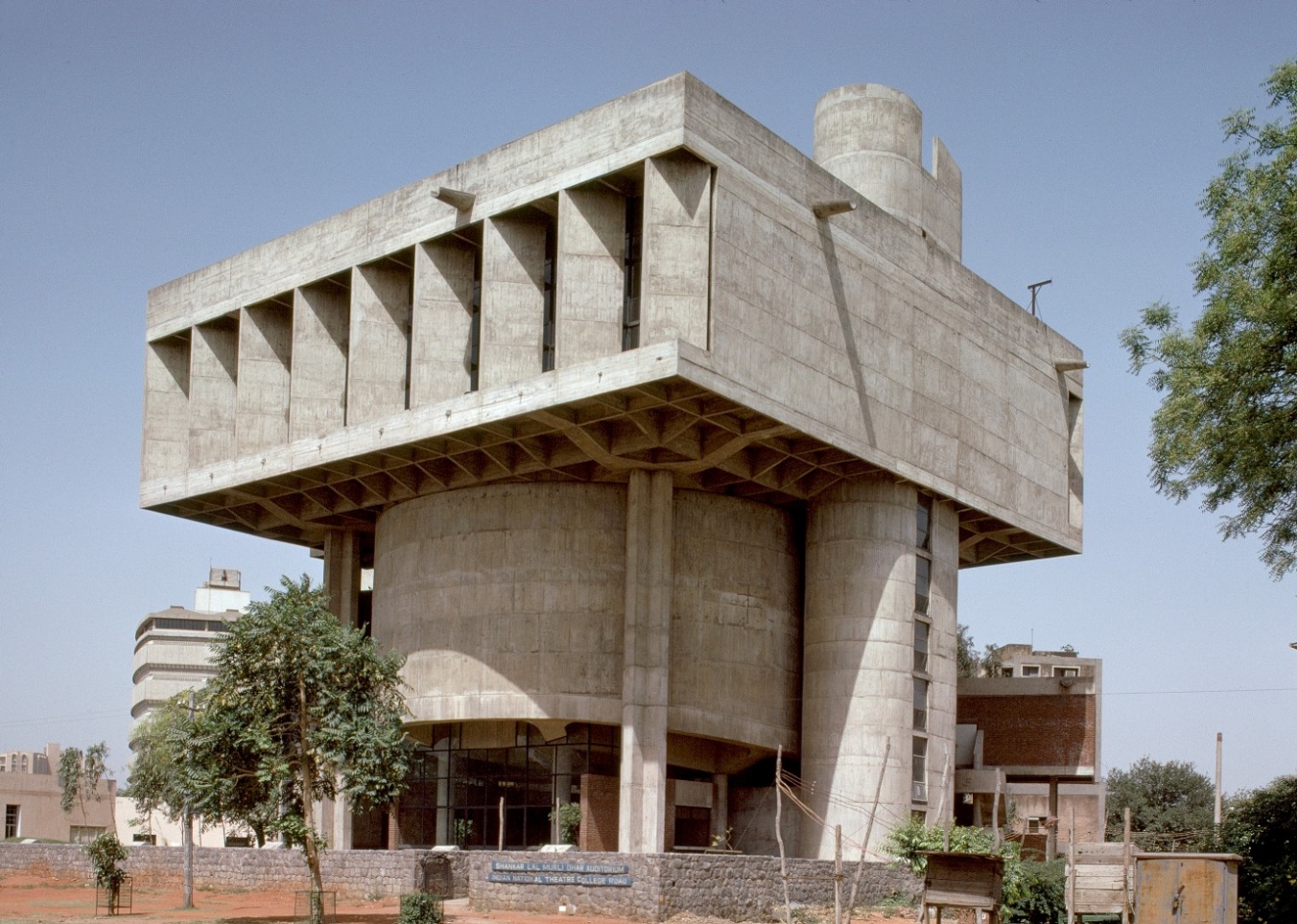 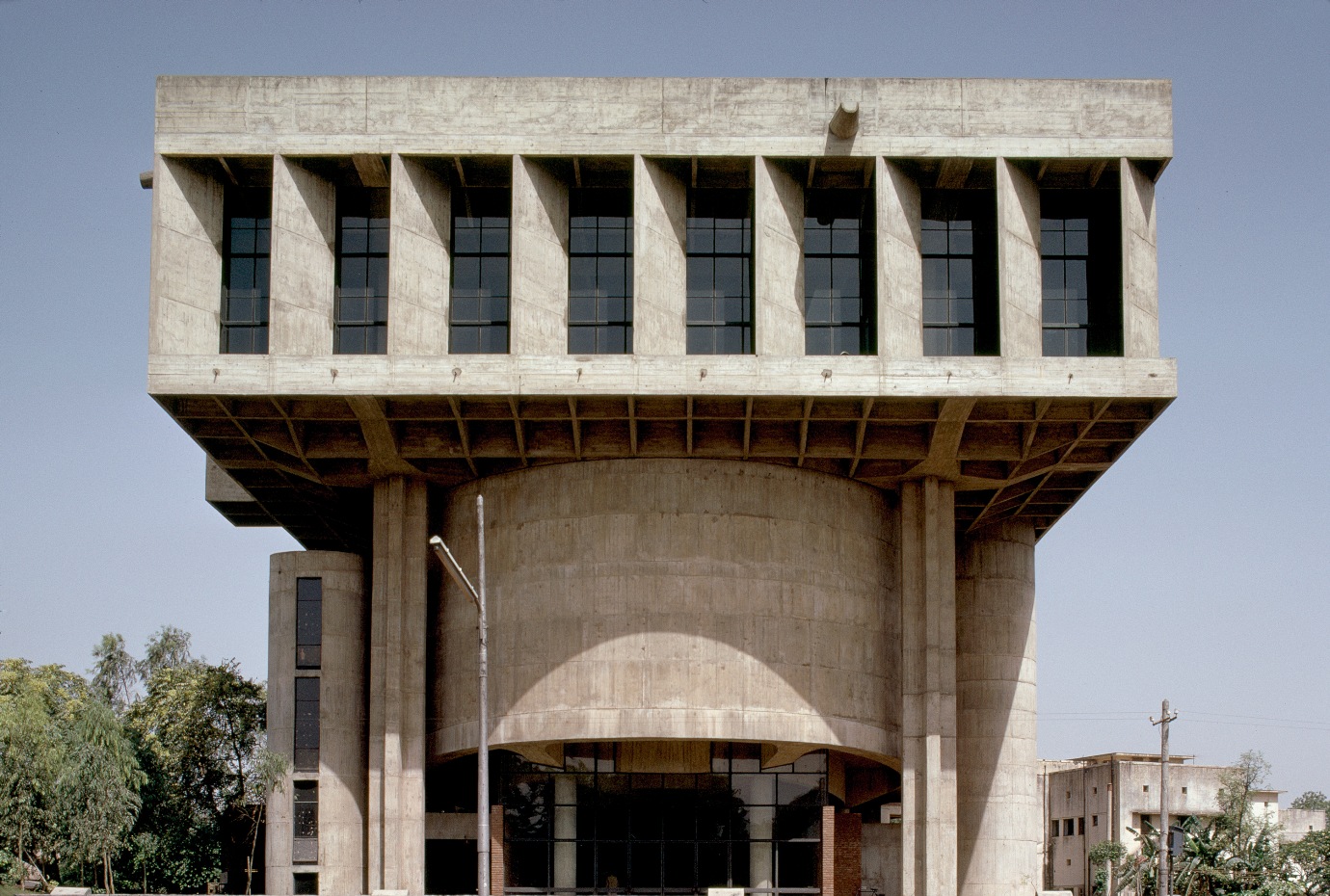 The top floor, rests on four cross-shaped columns placed at a distance of 19 metres from each other with six-metre cantilevers all around. The complete building is in reinforced concrete and shows the use of typical Corbusian vocabulary: sculptural forms, sun breakers, exposed concrete and water spouts.

Shivnath Prasad's devotion to master's philosophy is reflected even more vigorously in his design of the Central Library (1969-73) in Srinagar. Located in the state of Jammu and Kashmir, this library is built on a 1.5-hectare site on the campus of Kashmir University. The site has a backdrop of Majestic mountains and greenery all around. The building has a square plan with 9,375 square metres of built-up area. Pyramid-shaped skylights are provided in each structural grid to light the interiors of the library floor uniformly. 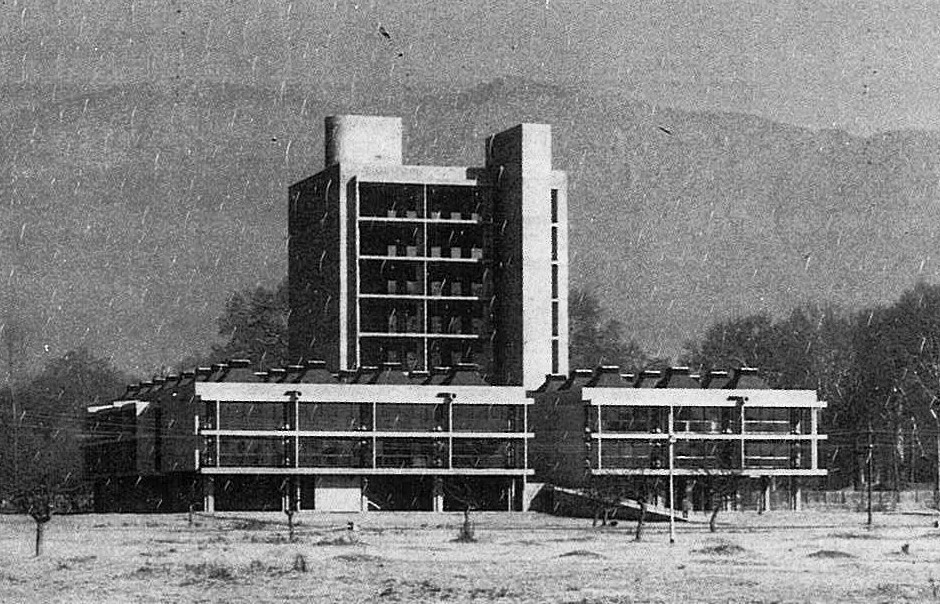 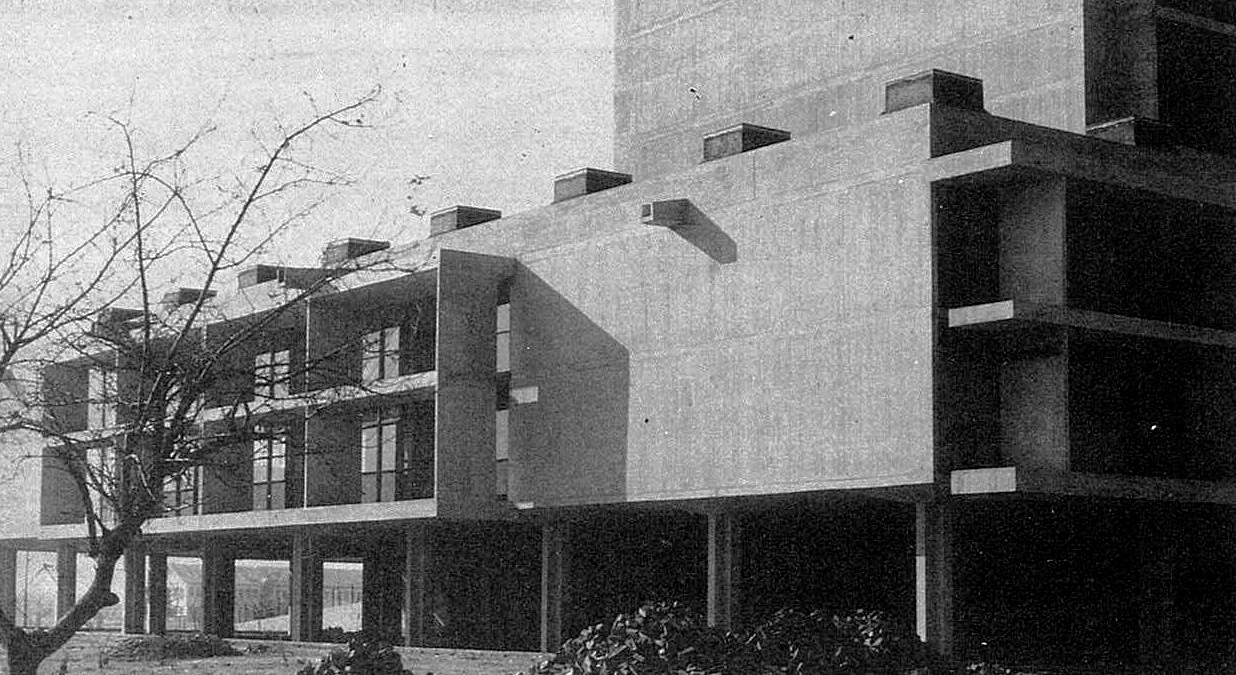 Spouts are provided to drain out rainwater from the terrace. The windows are protected from the sun and rain by brise-soleil. To capture the scenic splendour of the mountain ranges and to get the maximum light, the architect intentionally enlarged the size of the glazed openings.

The staircase and the lift towers add verticality to this temple of learning and stand in striking contrast to the rugged profile of the mountains. The building is a reinforced-concrete-frame structure with exposed shuttering patterns. 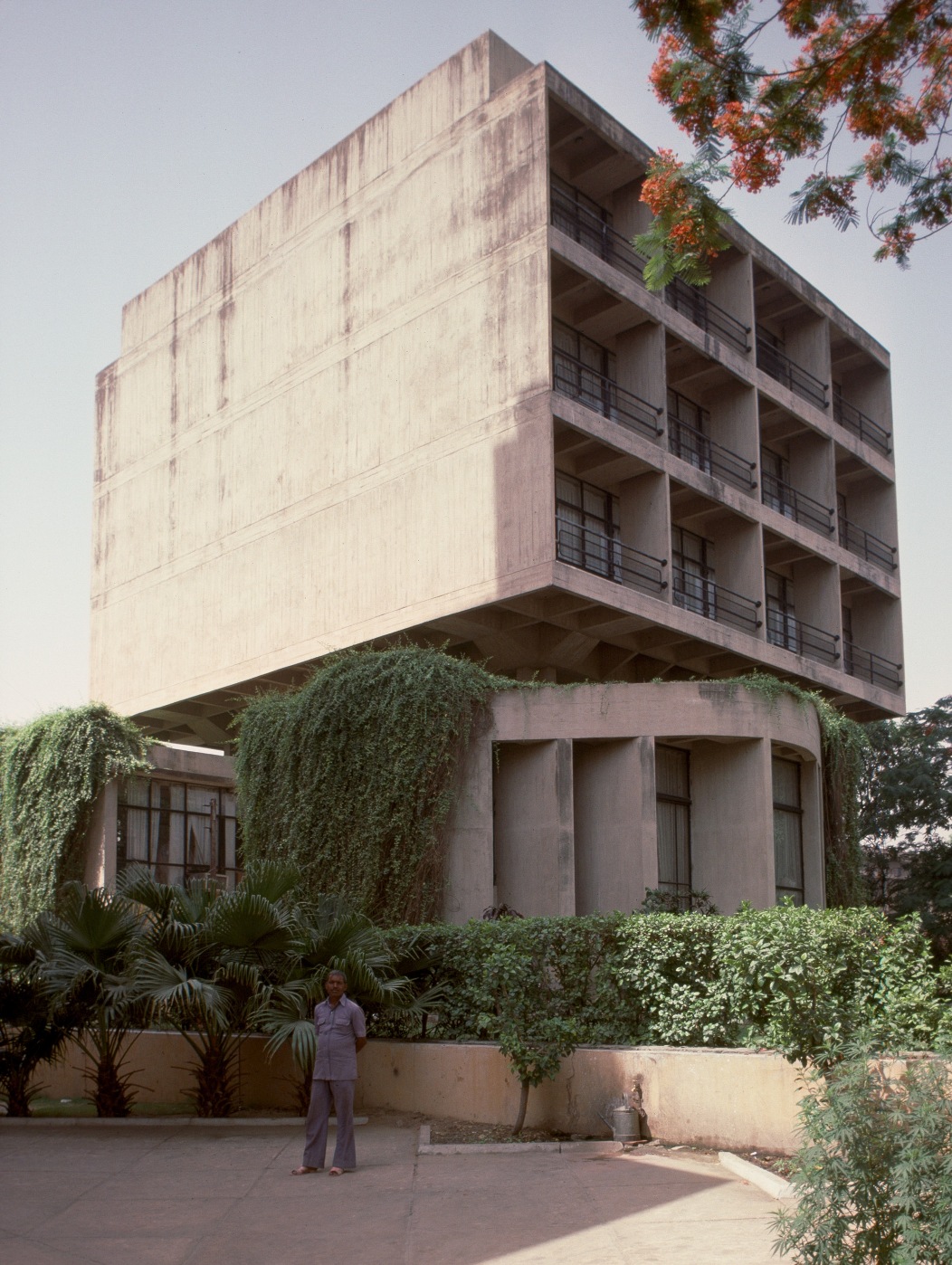 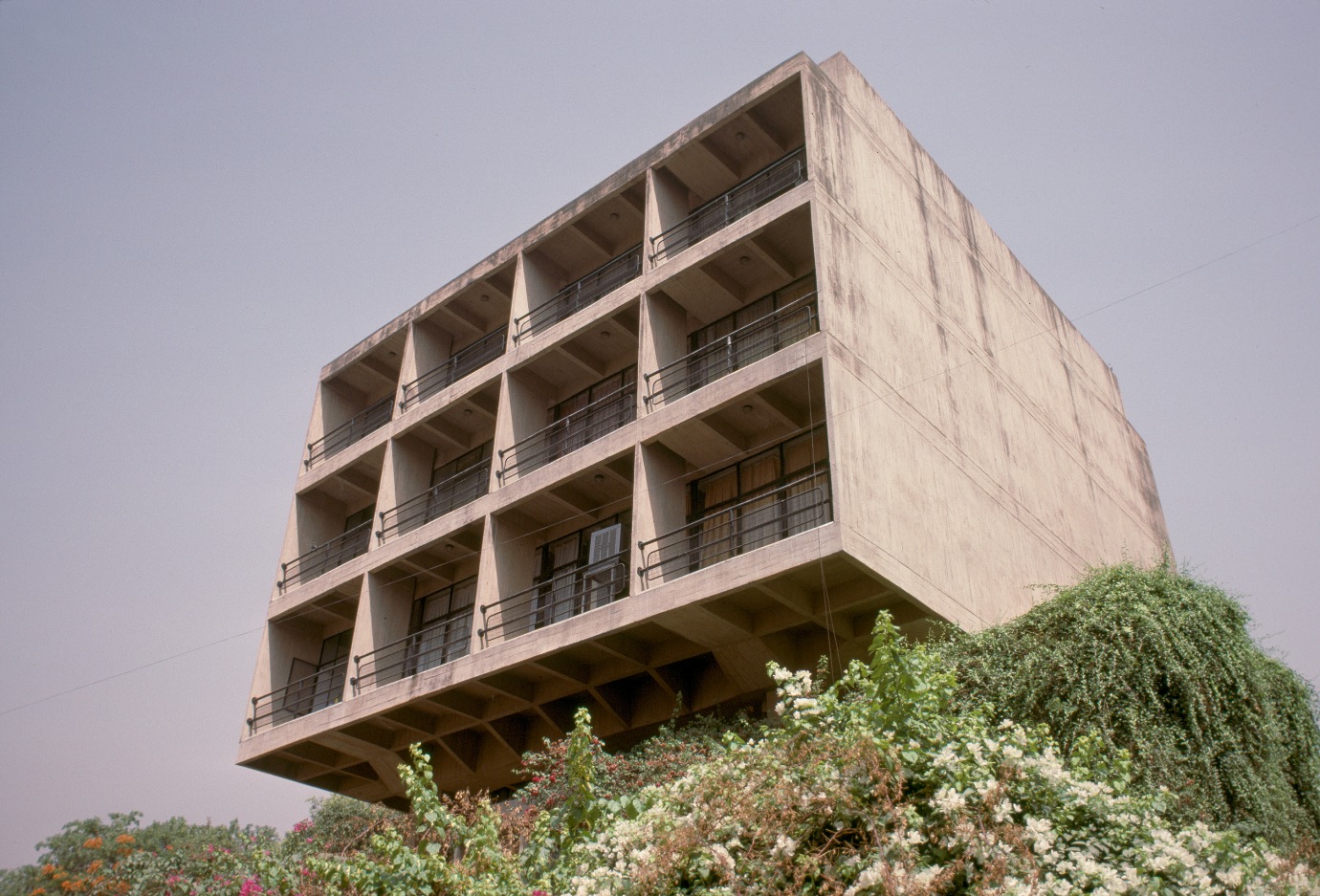 In the design of Tibet House (1970), Shivnath Prasad incorporated an elevated cube, a low-height curvilinear block on its left, and a rectangular block at the rear. The ingenious play of masses of varying heights in exposed concrete finish with Corbusian vocabulary of brise-soleil, and grid-iron pattern of horizontal and vertical lines makes this building at par with the best of his master's. 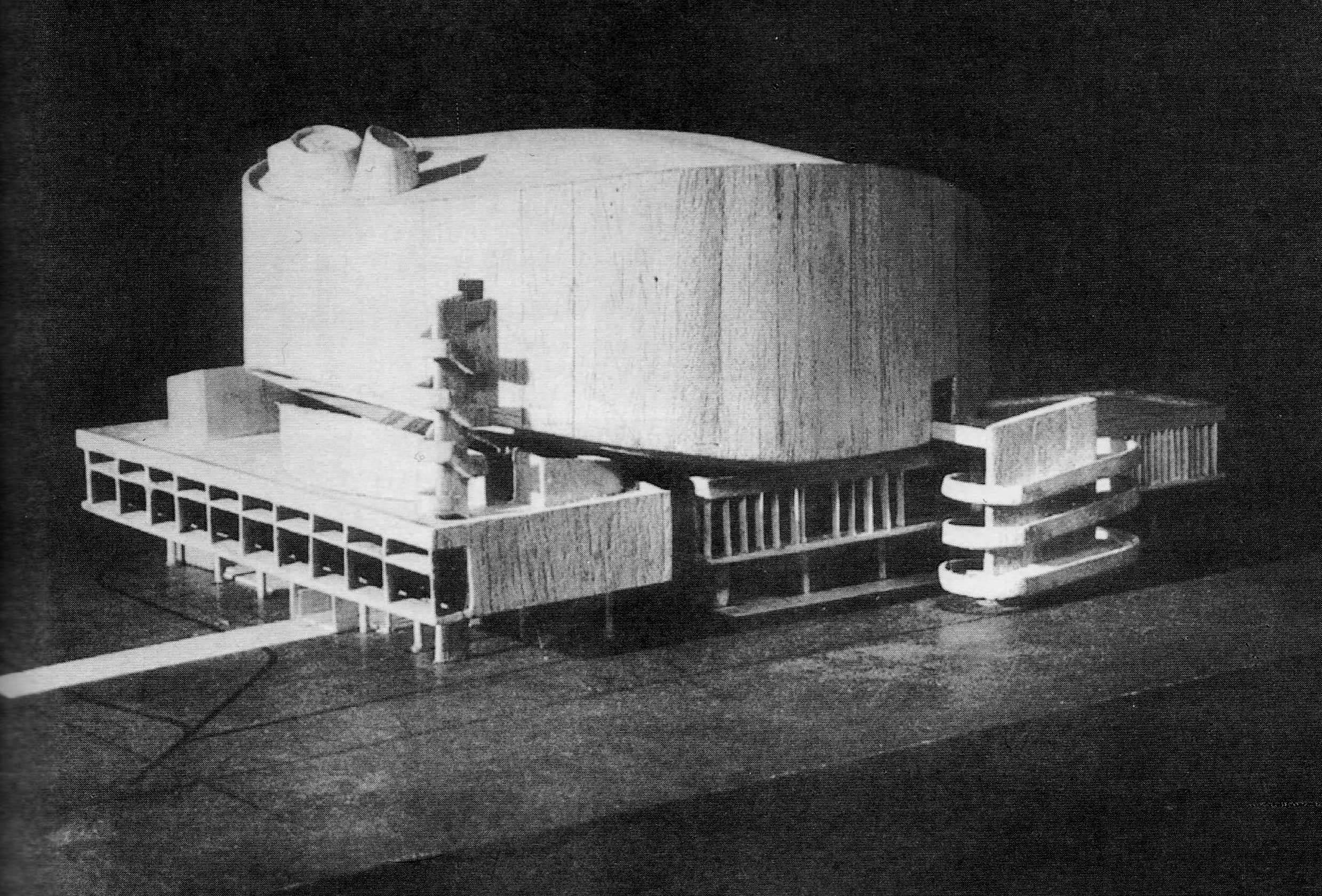 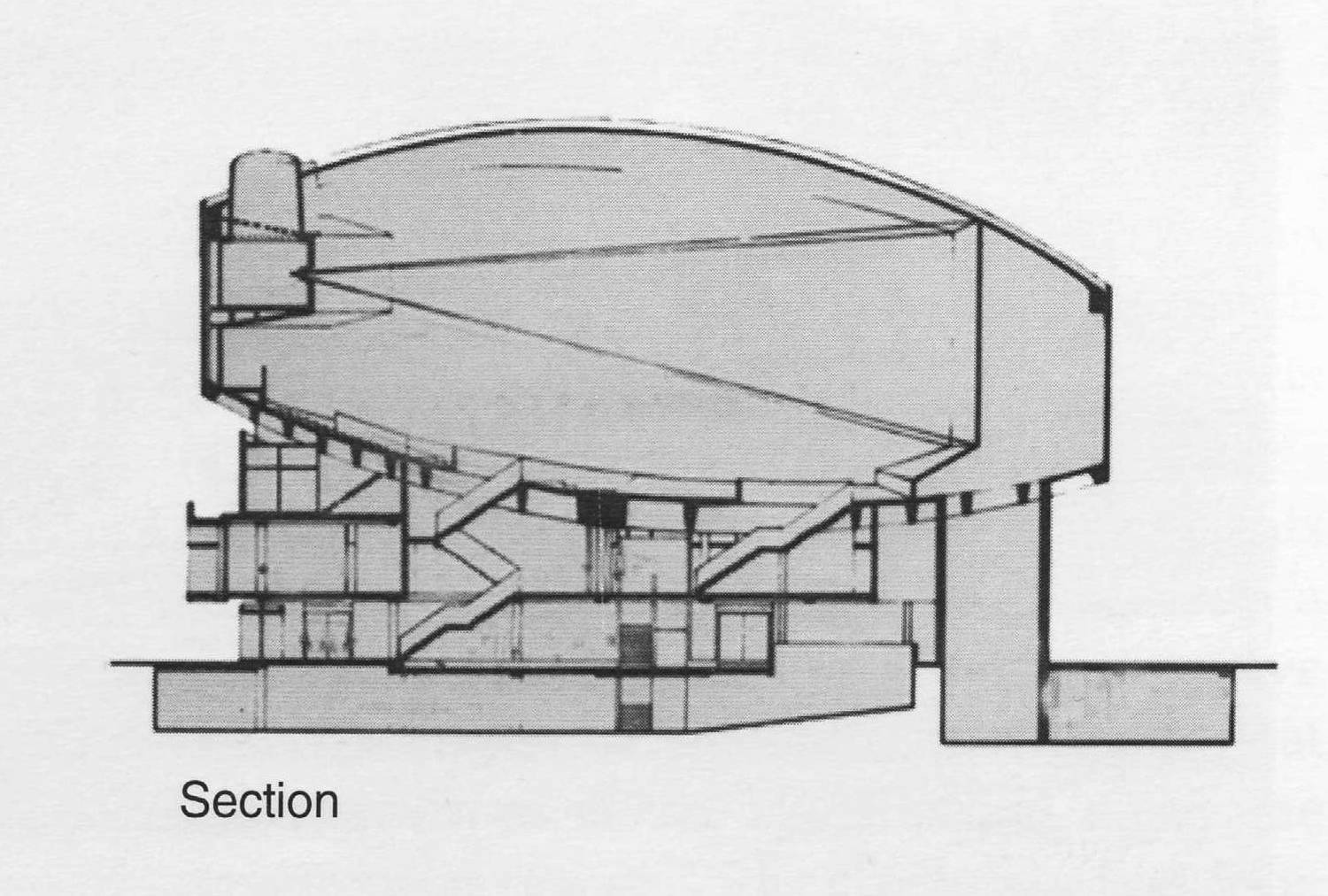 The profile of an unbuilt Cinema Hall designed by Prasad, further demonstrates the influence of Corbusier on his style. The design attempts to solve parking and traffic problems. The auditorium with a seating capacity for 1000 persons is located on the second floor. It has a shell roof 34-metre wide and 44-metre long. If the building had been completed, it would have been an exquisite example of Corbusian architecture. 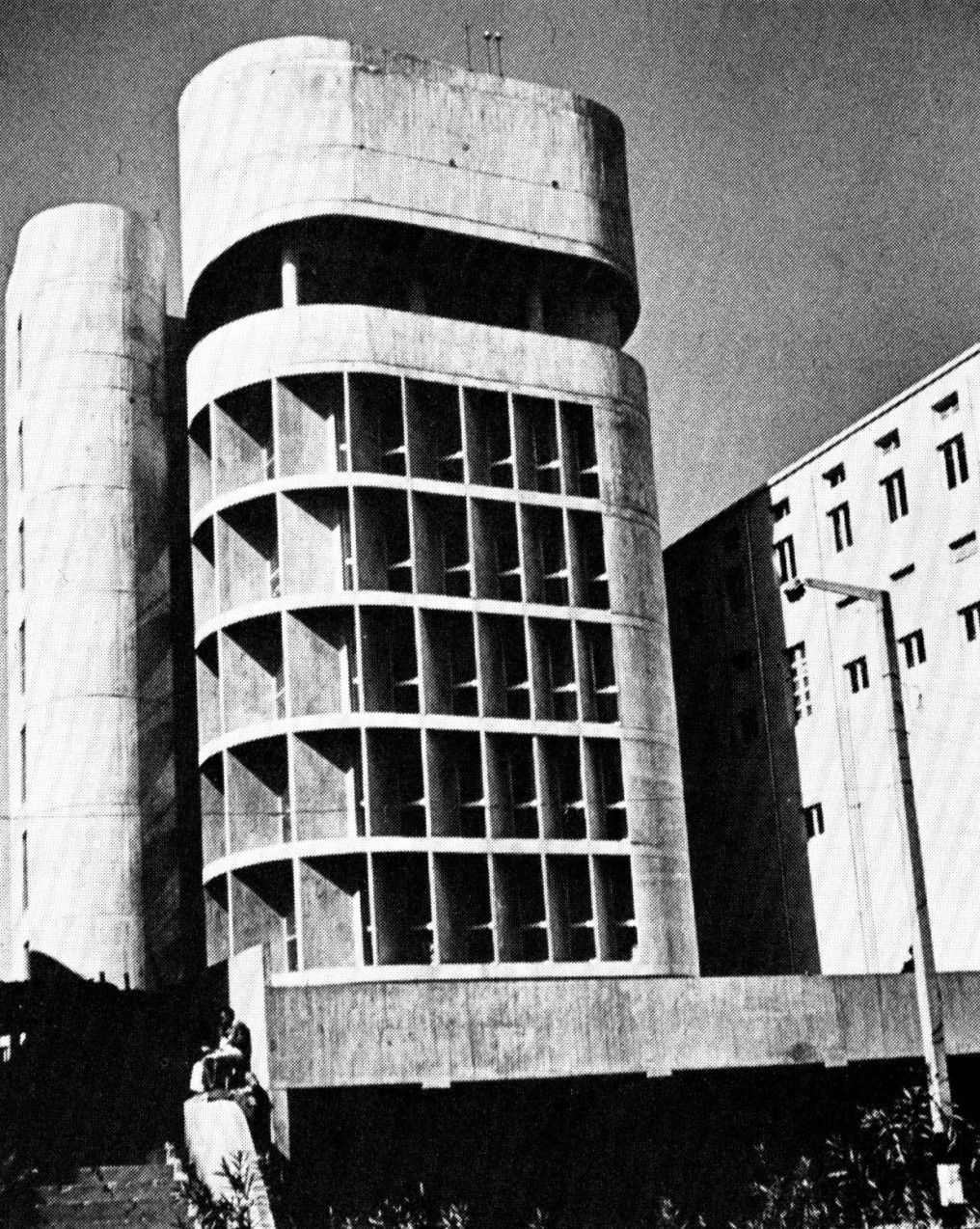 Other projects which Shivnath Prasad completed - the Institute of Charted Accountants (1971), the Architect's Own Residence (1968-74) and Sethi House (1968) - are a telling display of his efforts to promote Corbusierism in the architectural style of modern India.

So strong was Prasad's affinity with Le Corbusier and so firm was his belief in modernism that at the age of 76 he felt that, "Corbusier was the greatest man produced in this subject. I don't think it will happen again. He is away, but his contribution is very profound. This world does not understand him. We are lucky he did work in India. Some of his greatest" (As state by him in a letter to the author dated February 21, 1998). 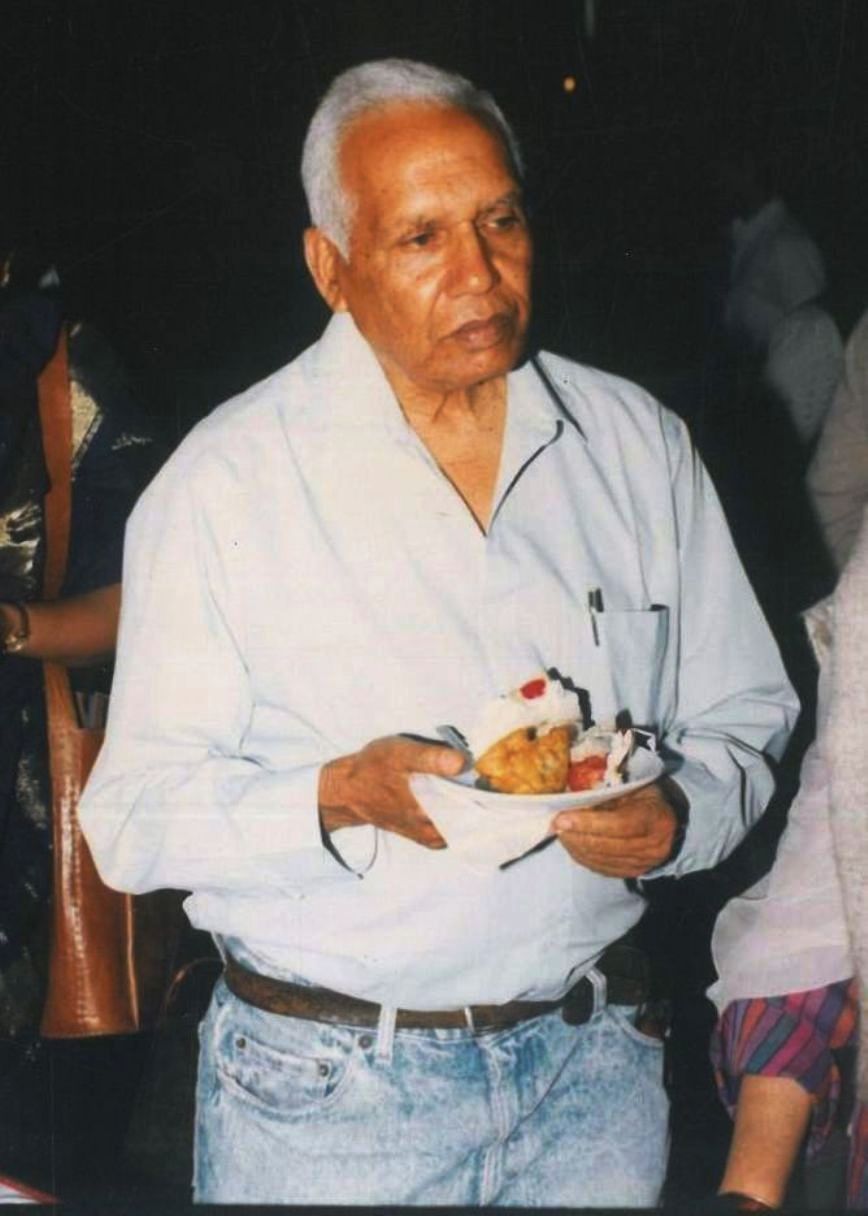 Sivnath Prasad was born at Lucknow in 1922. After graduating in architecture from the Edinburgh College of Art, UK in 1946, Prasad obtained a Diploma in City Planning in 1947. He worked for a number of years in England as an architect and town planner before returning to India in 1955. He joined the Town and Country Planning Organisation, Government of India, where he was the technical head of the Indian team which prepared the First Master Plan for Delhi in collaboration with a team of experts sponsored by the Ford Foundation.

In 1962, Prasad resigned from the government service to get back to architecture. For the next about one decade, he ran a one-man practice based in Delhi. His works of this period have been widely published in India and abroad. They are largely built of exposed reinforced concrete with rich patterns and textures to reflect Indian craftsmanship.

With the demise of Shivnath Prasad in early 2000s India lost its indigenous Le Corbusier thus creating a void which is hard to fill.