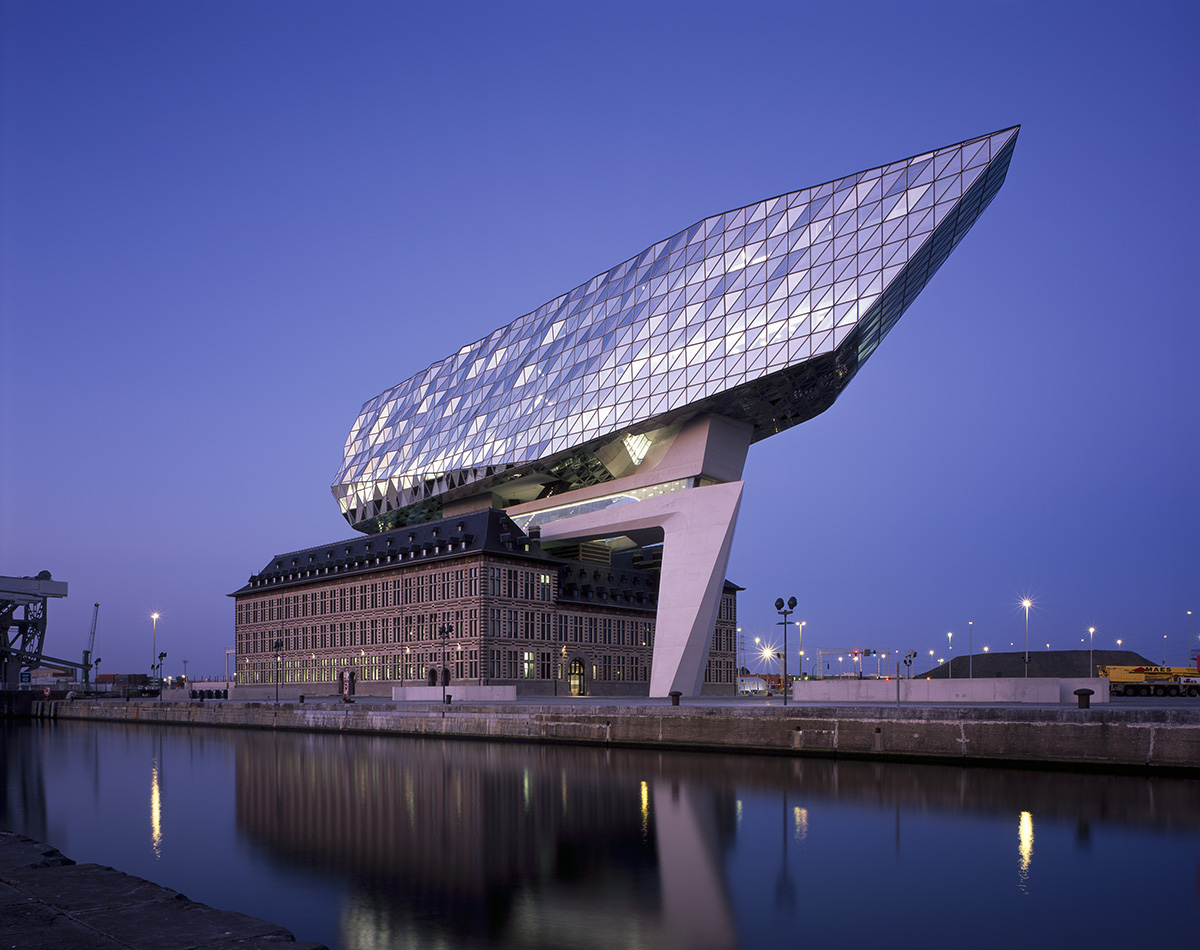 Zaha Hadid Architects has finally inaugurated the new Antwerp Port House in Belgium, which repurposes, renovates and extends a derelict fire station into a new headquarters for the port – bringing together the port’s 500 staff that previously worked in separate buildings around the city. With 12 km of docks, Antwerp is Europe’s second largest shipping port, serving 15,000 sea trade ships and 60,000 inland barges each year.

Antwerp handles 26% of Europe’s container shipping, transporting more than 200 million tonnes of goods via the ocean-going vessels that call at the port and providing direct employment for over 60,000 people, including more than 8,000 port workers. Indirectly, the Port of Antwerp ensures about 150,000 jobs and has ambitious targets for future expansion to meet the continent’s growth and development over the next century. 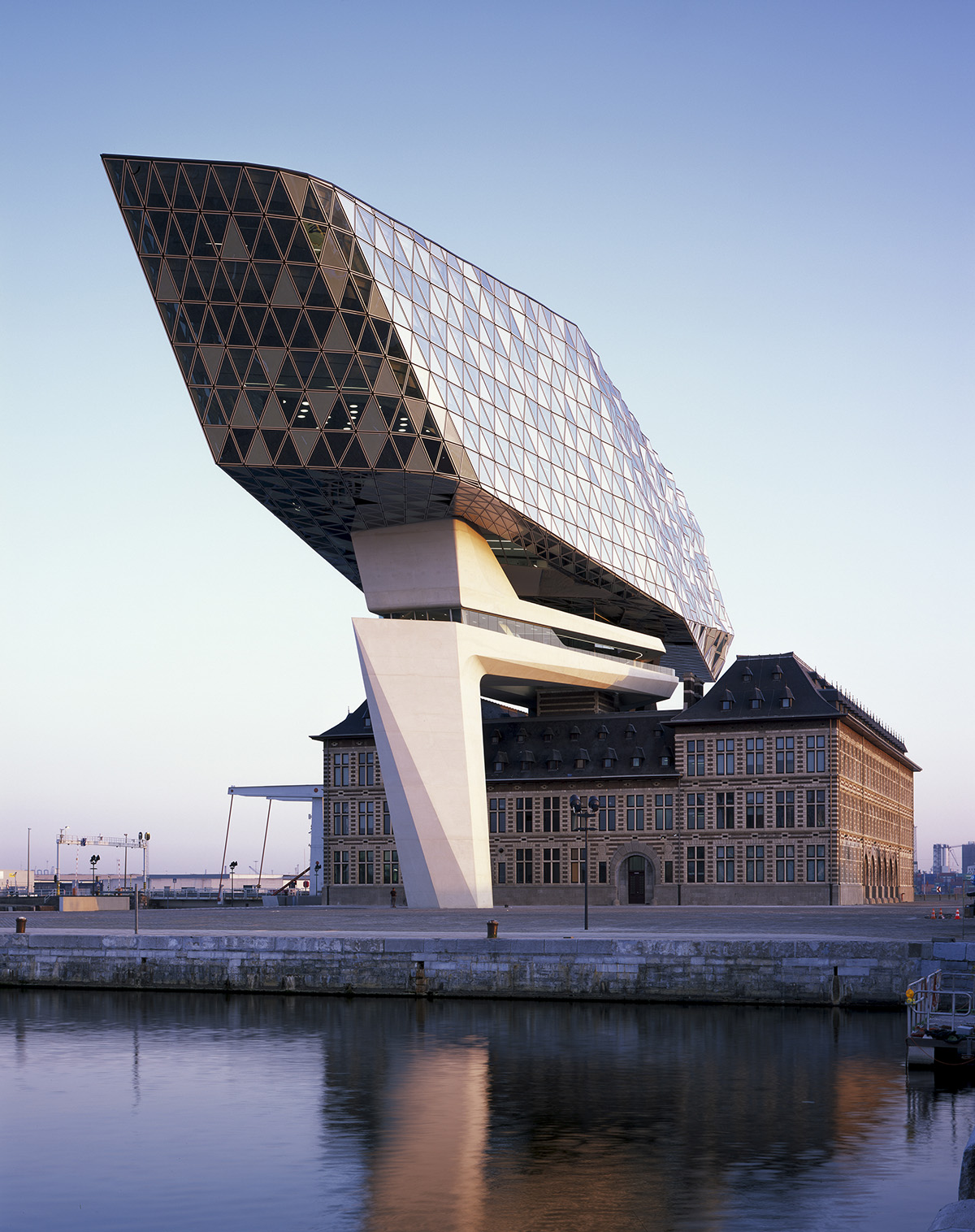 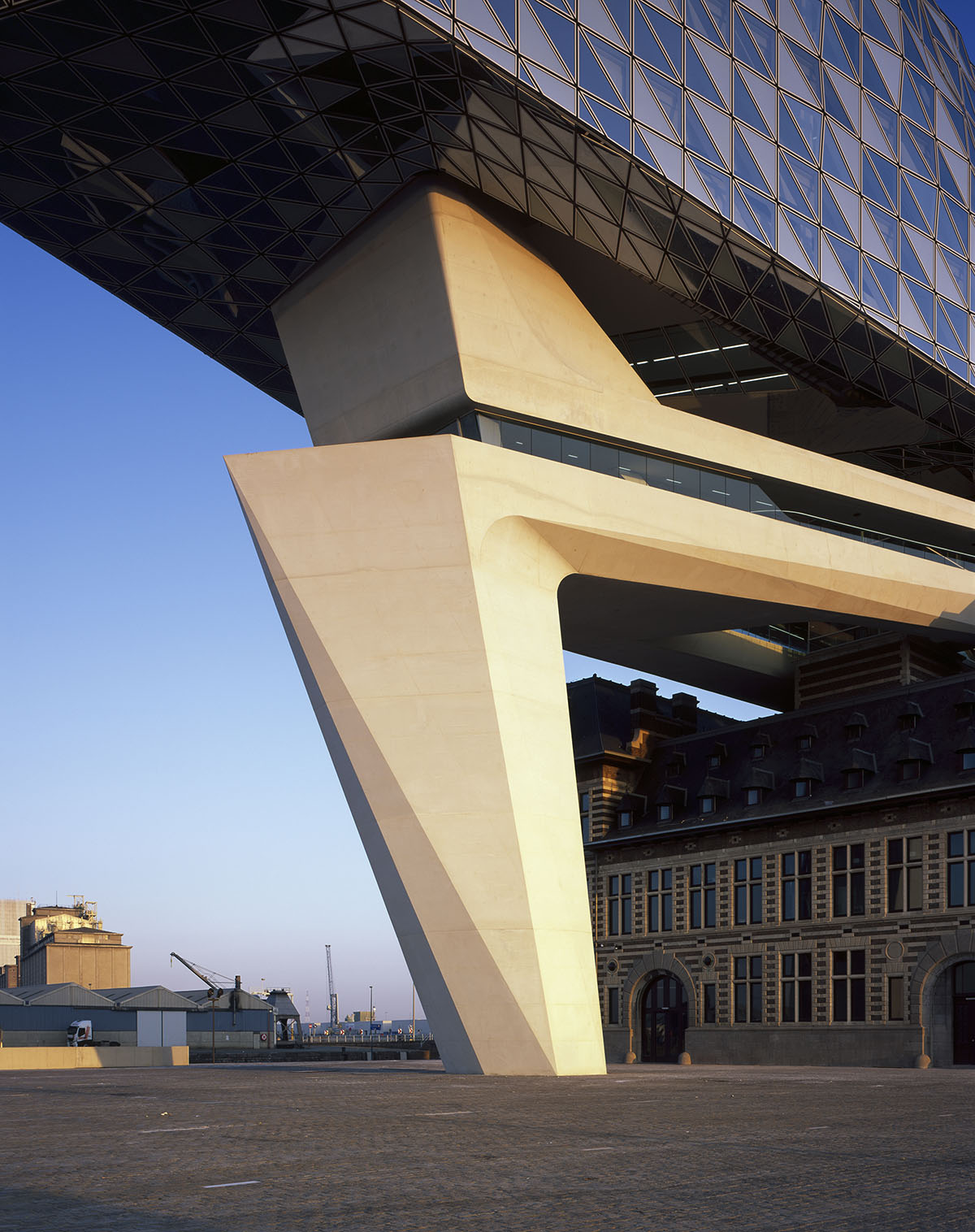 Following the construction of a new fire station with facilities needed to service the expanding port, the old fire station on the Mexico Island site – a listed replica of a Hanseatic residence – became redundant and relied on a change of use to ensure its preservation.

This disused fire station had to be integrated into the new project. The Flemish government's department of architecture, together with the City and Port authorities organized the architectural competition for the new headquarters. Zaha Hadid Architects' design is informed by detailed historical research and a thorough analysis of both the site and the existing building.

''There was only one rule laid down in the architectural competition, namely that the original building had to be preserved. There were no other requirements imposed for the positioning of the new building. The jury was therefore pleasantly surprised when the five shortlisted candidates all opted for a modern structure above the original building. They all combined the new with the old, but the design by Zaha Hadid Architects was the most brilliant,'' said Marc Van Peel, president of the Port of Antwerp. 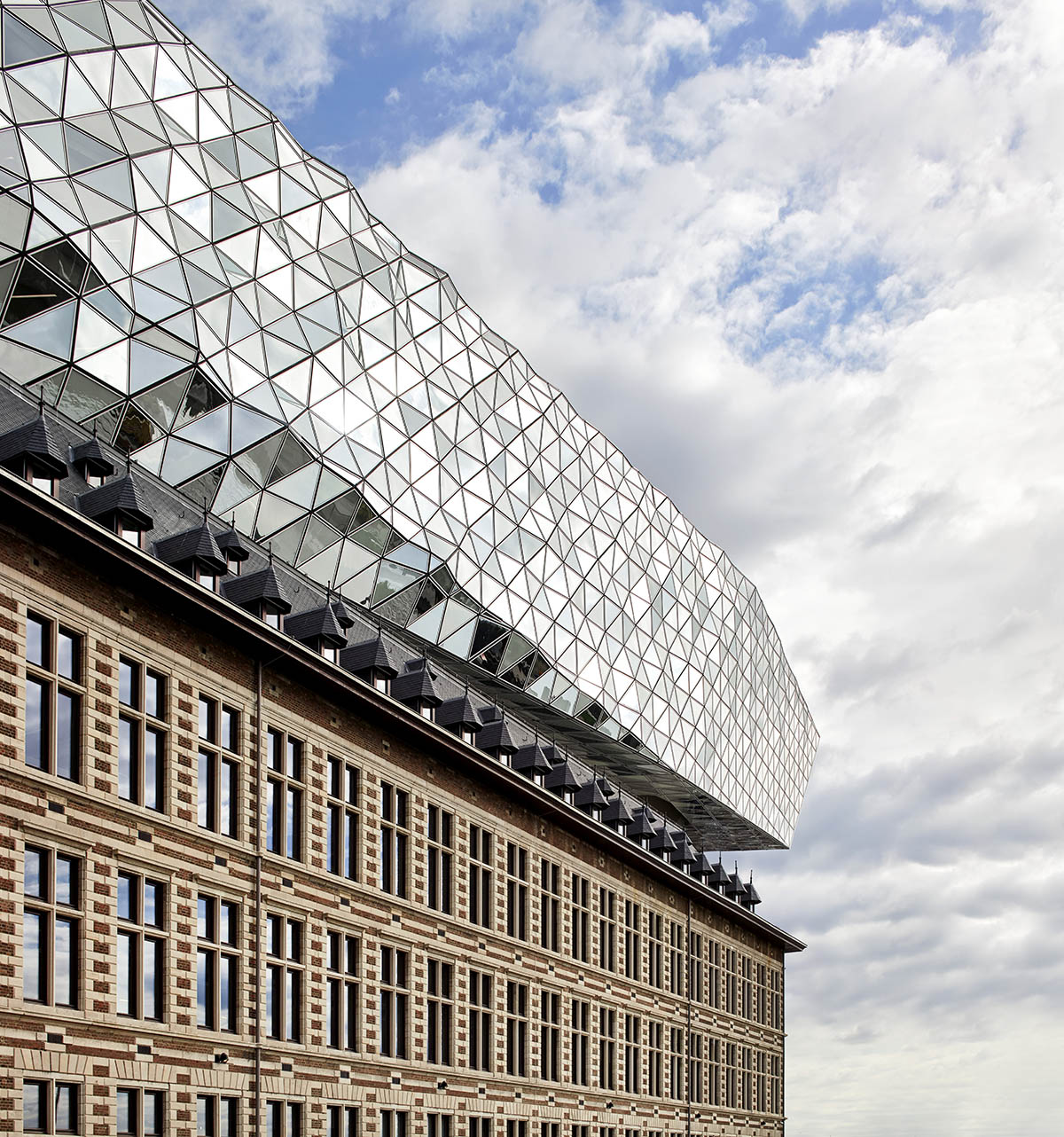 Working with Origin, leading heritage consultants in the restoration and renovation of historic monuments, ZHA’s studies of the site’s history and heritage are the foundations of the design which firstly emphasises the north-south site axis parallel with the Kattendijkdok linking the city centre to the port.

Secondly, due to its location surrounded by water, the building's four elevations are considered of equal importance with no principal facade. 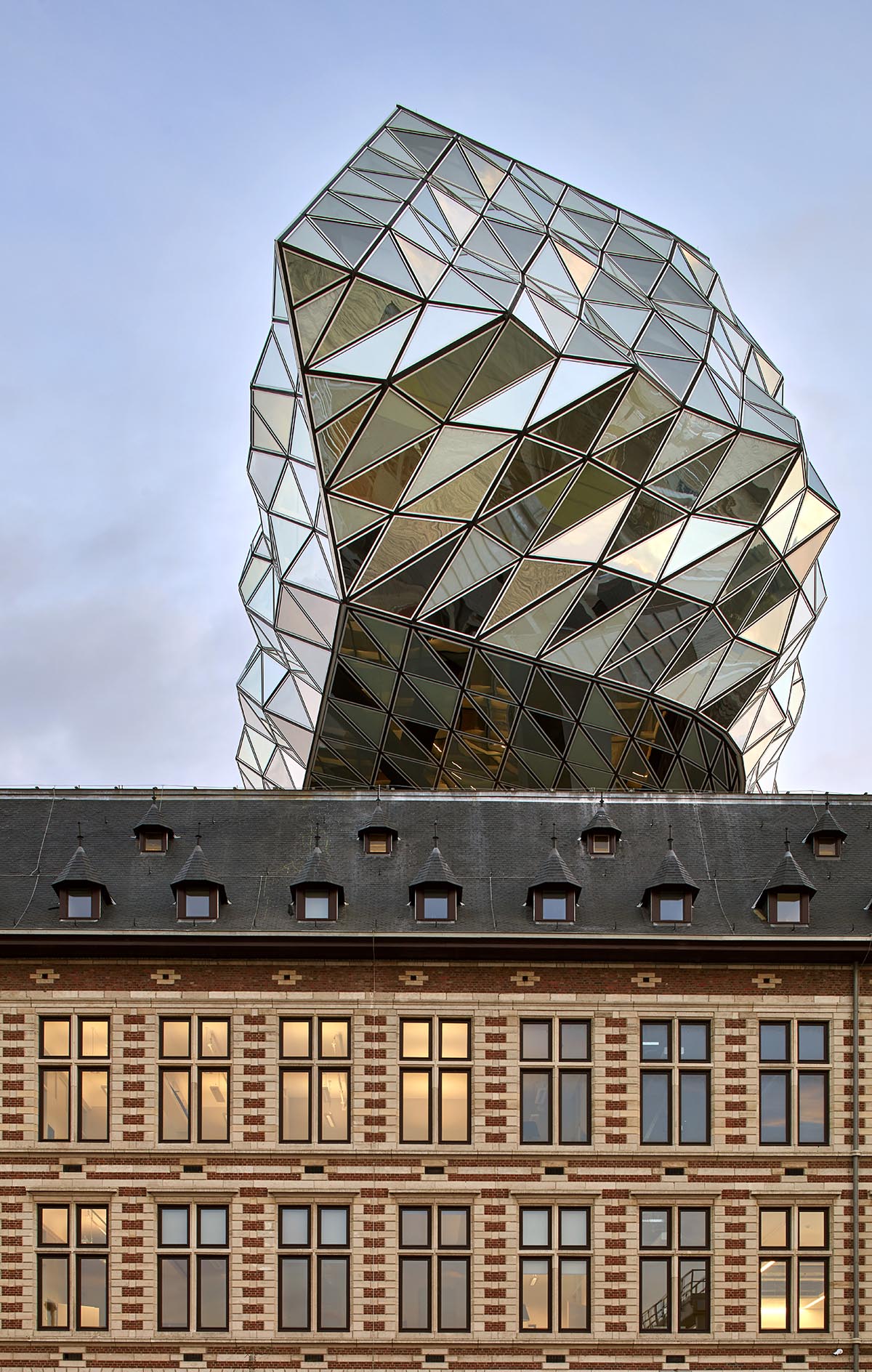 ZHA’s design is an elevated extension, rather than a neighbouring volume which would have concealed at least one of the existing facades. ZHA and Origin’s historic analysis of the old fire station also highlighted the role of its originally intended tower - a grand, imposing component of the fire station's Hanseatic design.

Its bold vertical statement, intended to crown the imposing volume of the building below, was never realised. 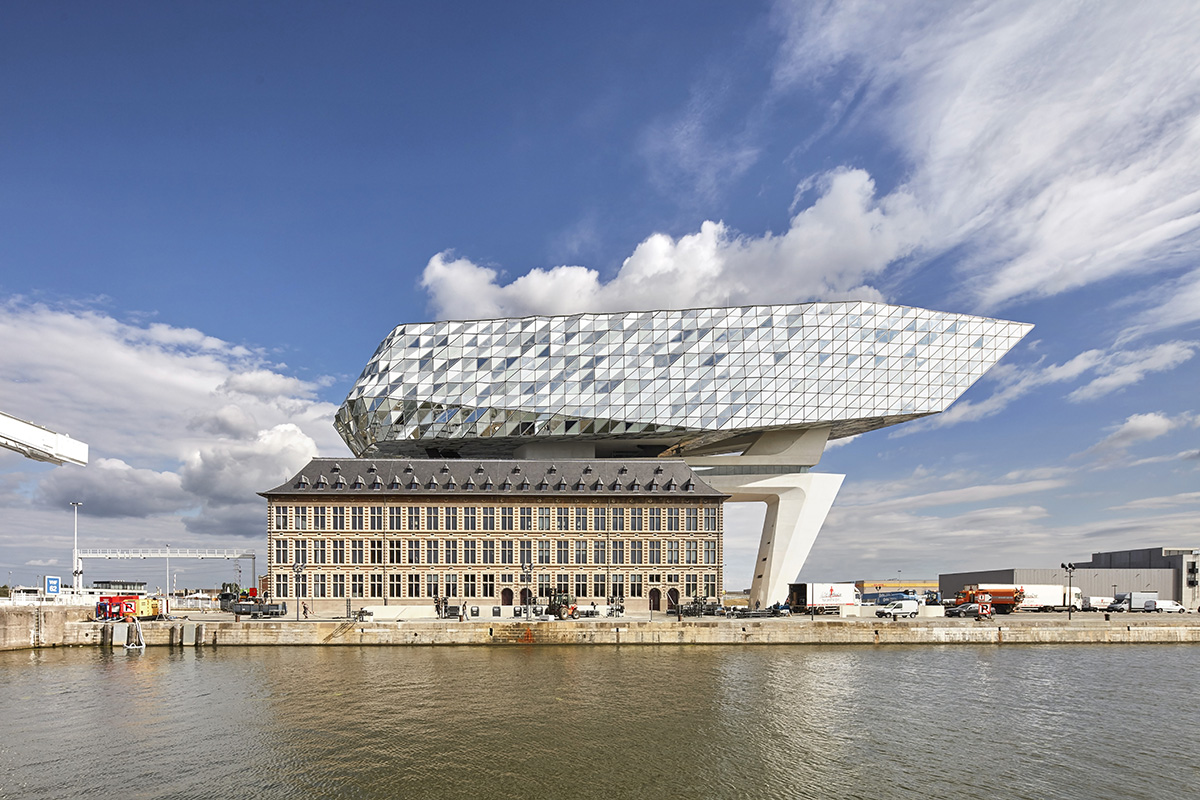 Surrounded by water, the new extension's façade is a glazed surface that ripples like waves and reflects the changing tones and colours of the city’s sky. Triangular facets allow the apparently smooth curves at either end of the building to be formed with flat sheets of glass. They also facilitate the gradual transition from a flat façade at the south end of the building to a rippling surface at the north. While most of the triangular facets are transparent, some are opaque. This calibrated mix ensures sufficient sunlight within the building, while also controlling solar load to guarantee optimal working conditions.

At the same time, the alternation of transparent and opaque facade panels breaks down the volume of the new extension, giving panoramic views of the Scheldt, the city and the Port as well as providing enclosure. The façade’s rippling quality is generated with flat facets to the south that gradually become more three-dimensional towards to the north. This perception of a transparent volume, cut to give the new building its sparkling appearance, reinterprets Antwerp’s moniker as the city of diamonds.

The new extension appears as a carefully cut form which changes its appearance with the shifting intensity of daylight. Like the ripples on the surface of the water in the surrounding port, the new façade reflects changing light conditions. 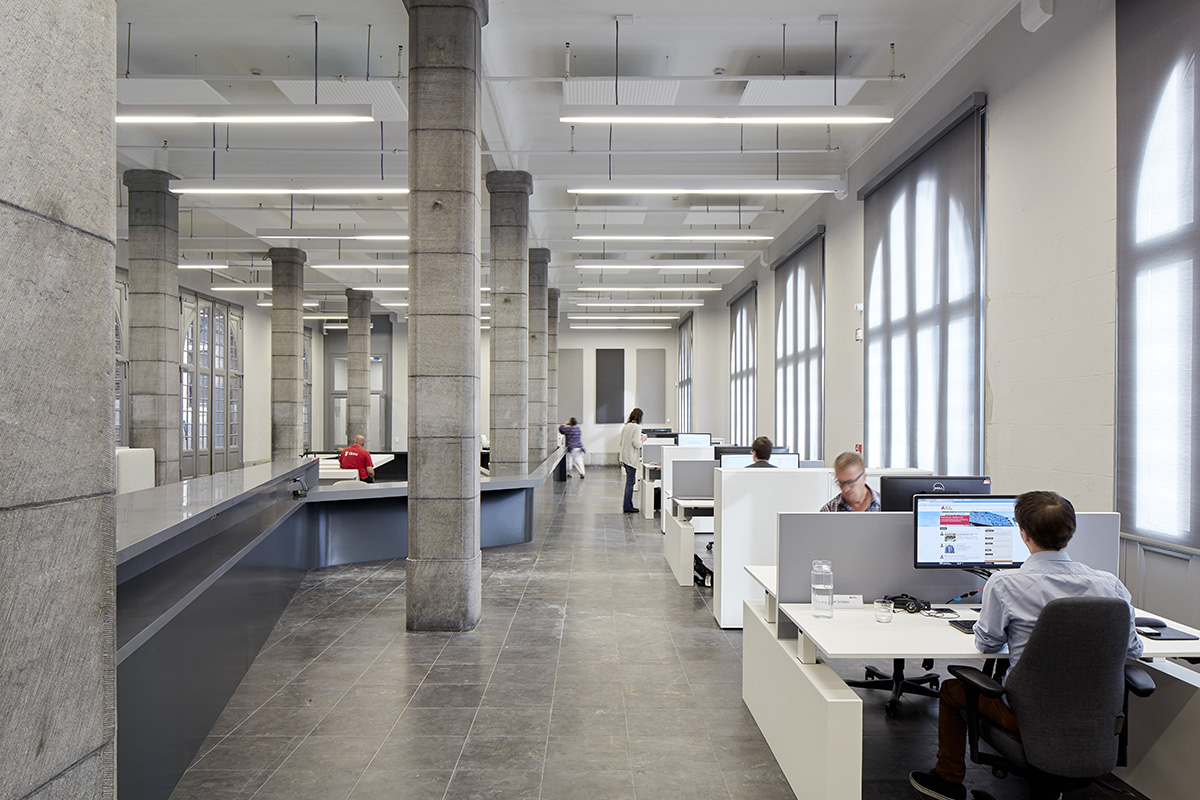 The old fire station’s central courtyard has been enclosed with a glass roof and is transformed into the main reception area for the new Port House. From this central atrium, visitors access the historic public reading room and library within the disused fire truck hall which has been carefully restored and preserved.

Panoramic lifts provide direct access to the new extension with an external bridge between the existing building and new extension giving panoramic views of the city and port. Collaborating with services consultant Ingenium, ZHA developed a sustainable and energy-efficient design reaching a ‘Very Good’ BREEAM environmental rating. Despite the challenges of integrating with a protected historic building, high standards in sustainable design were achieved by implementing effective strategies at each stage of construction. 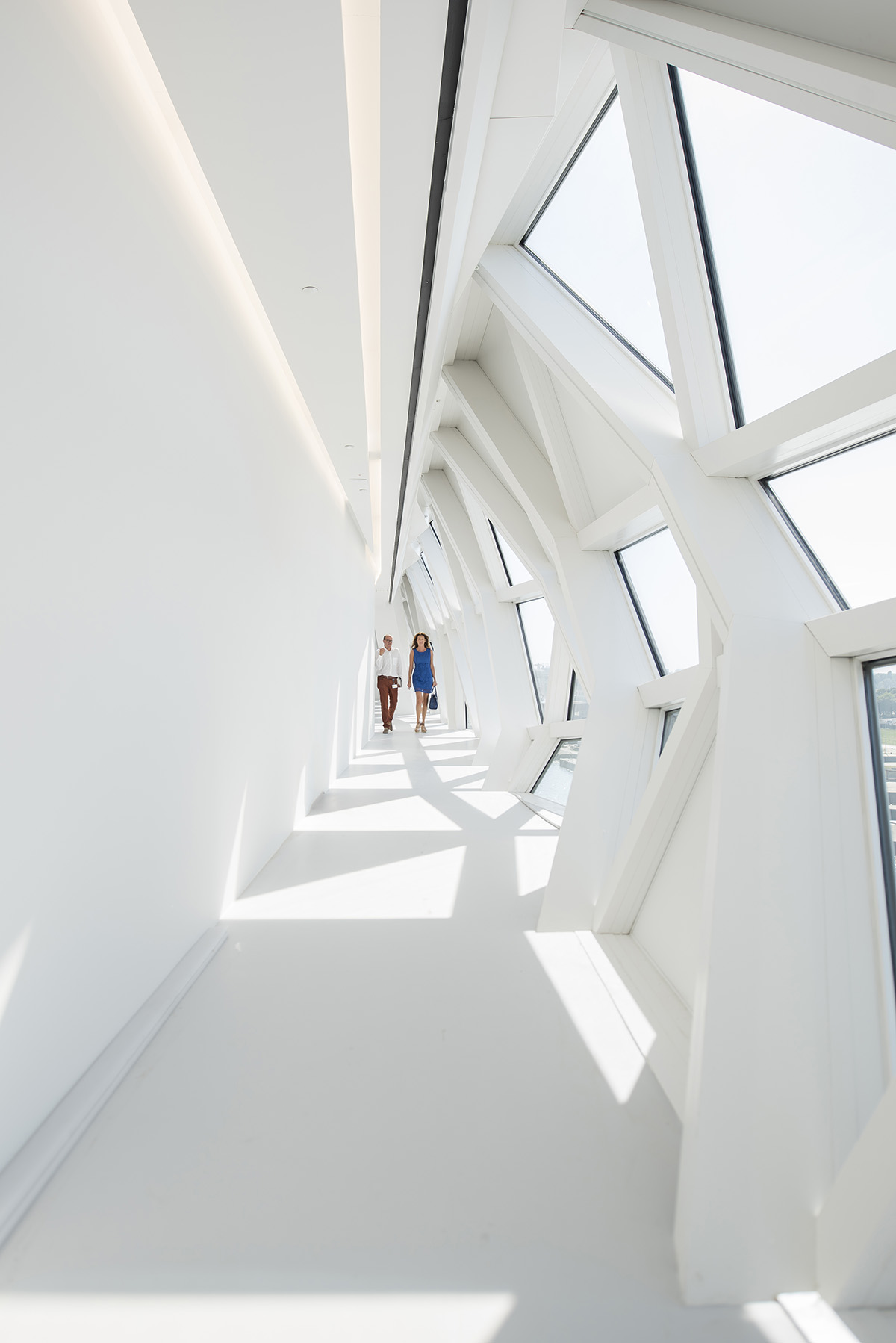 A borehole energy system pumps water to a depth of 80m below grade in over 100 locations around the building to provide heating and cooling. In the existing building, this system uses chilled beams. 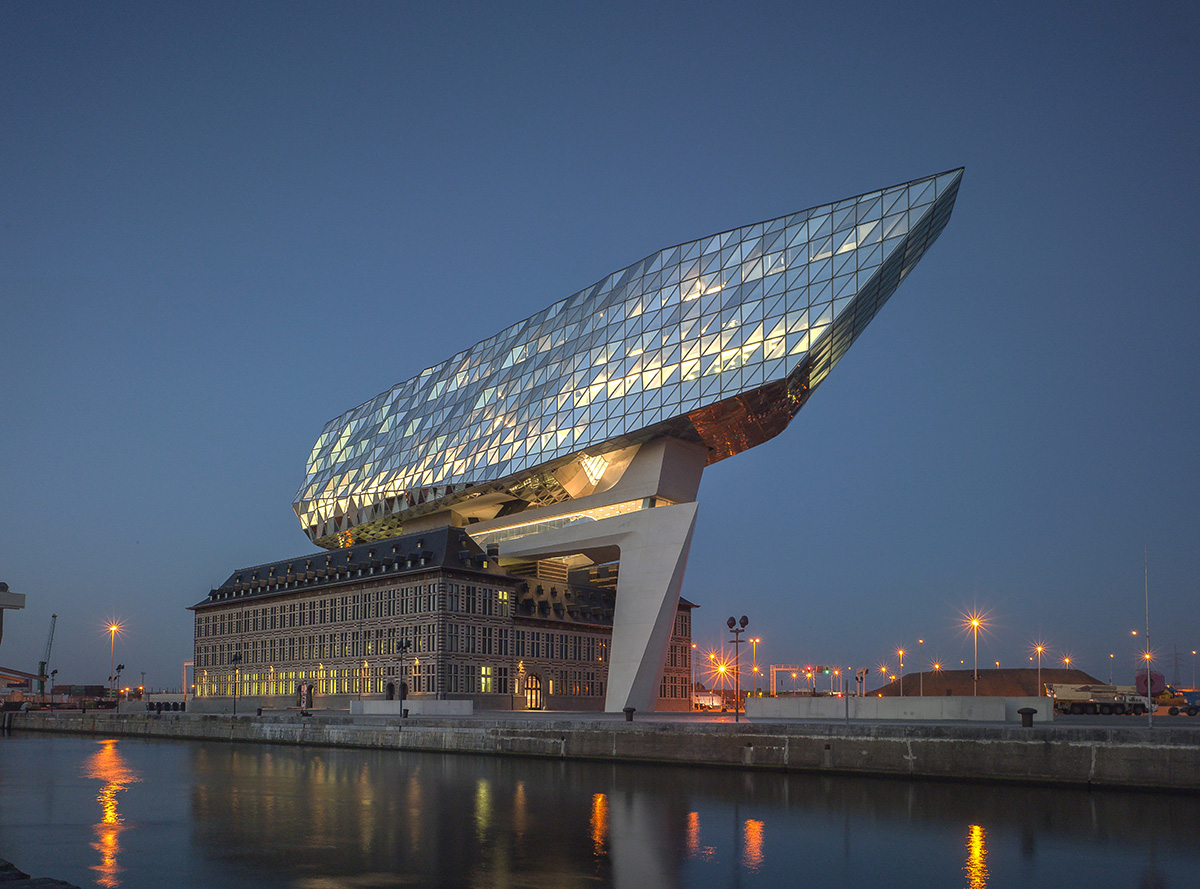 With constant references to the Scheldt, the city of Antwerp and the dynamics of its port, married with the successful renovation and reuse of a redundant fire station - integrating it as a fully-fledged part of its headquarters - the new Port House will serve the port well through its planned expansion over future generations. Marc Van Peel said: “The architectural style of the original building, a replica of the former Hansa House, recalls the 16th century, Antwerp's "golden century." But now above this original, a contemporary structure in shining glass has been built, which I am sure, represents a new golden century for Antwerp.” 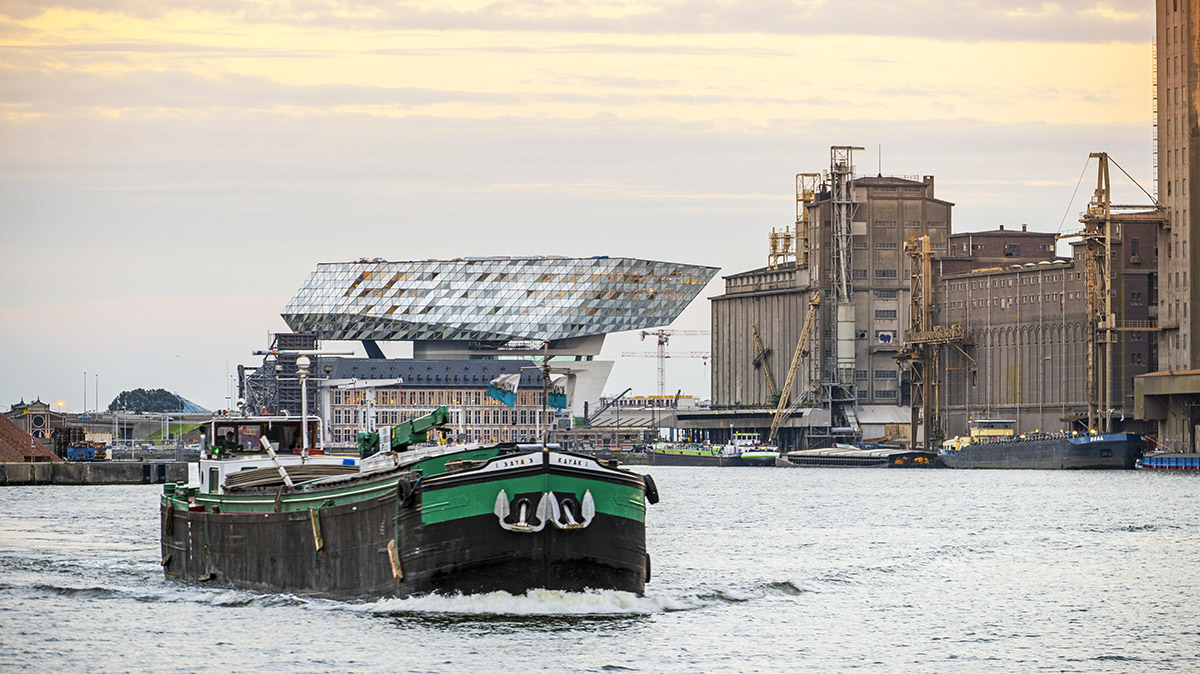 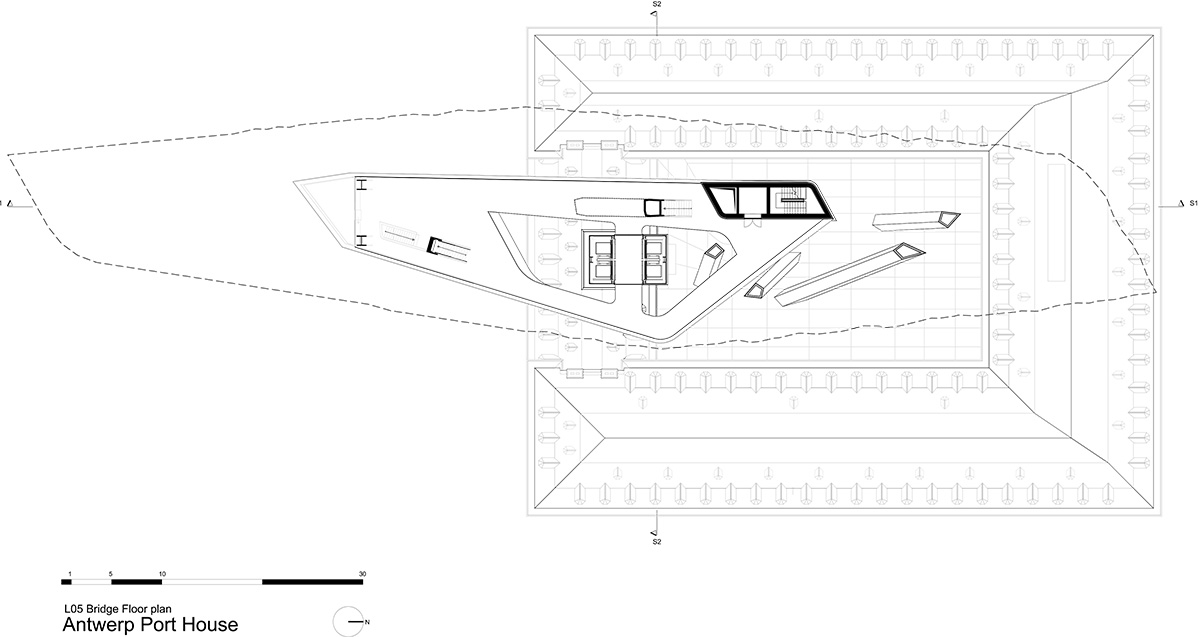 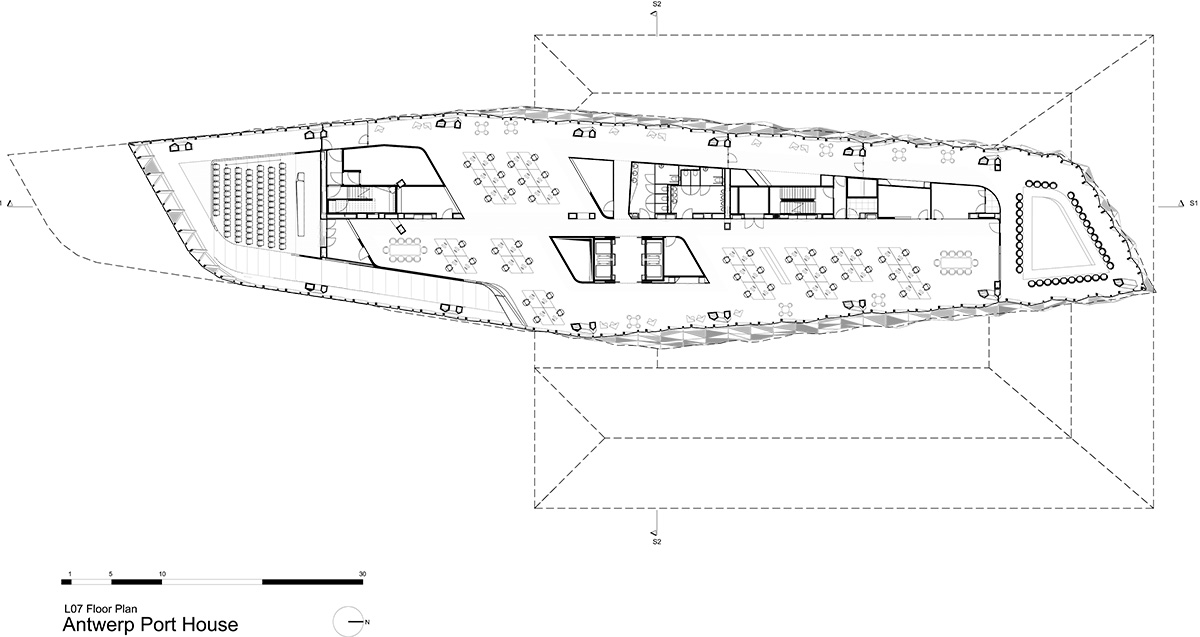 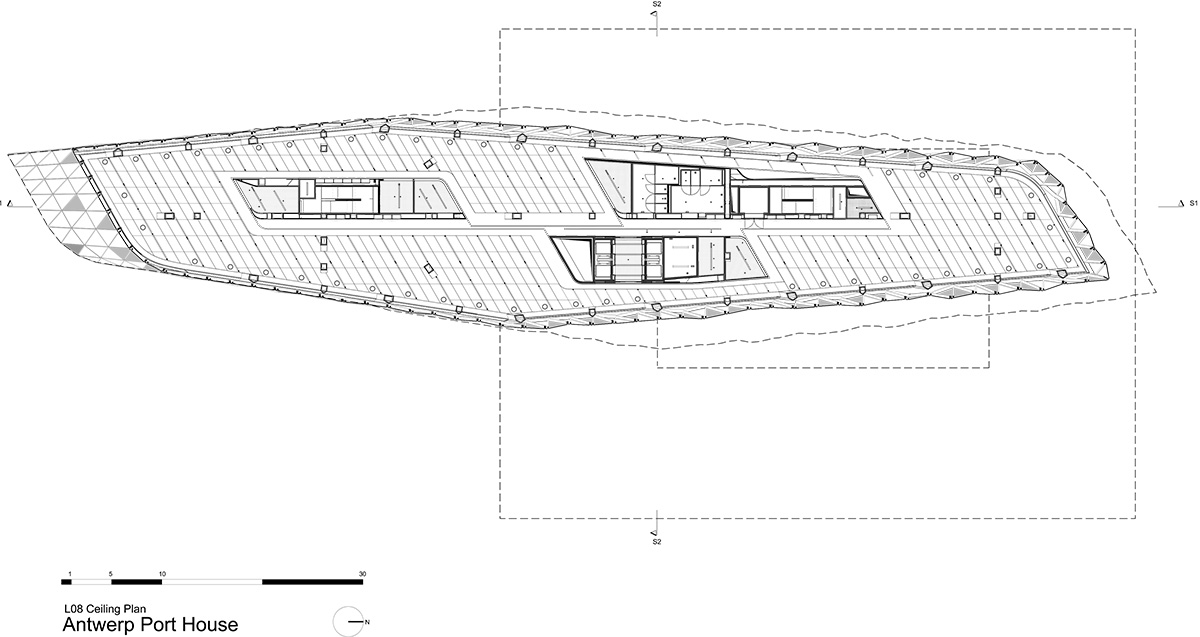 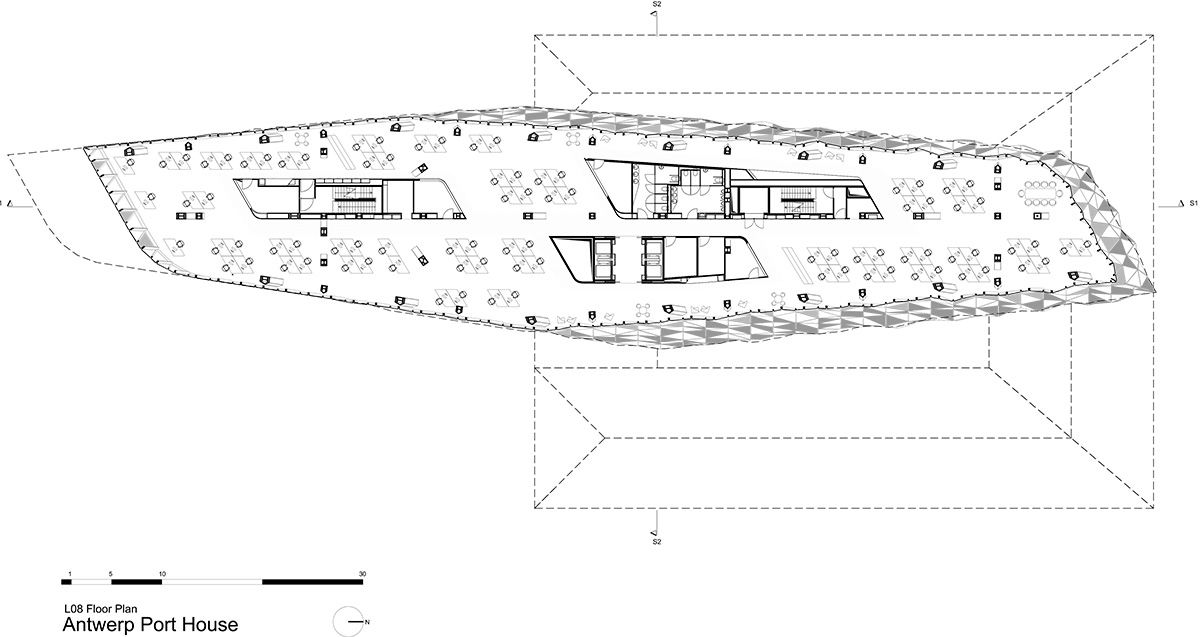 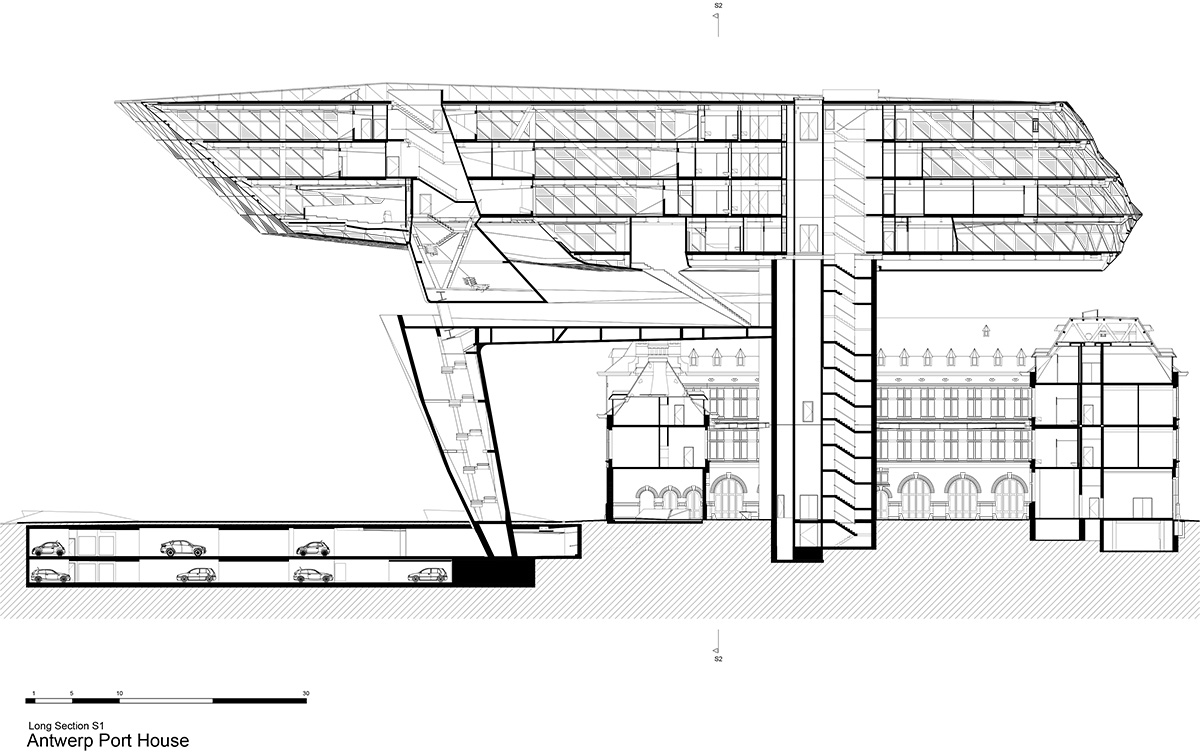 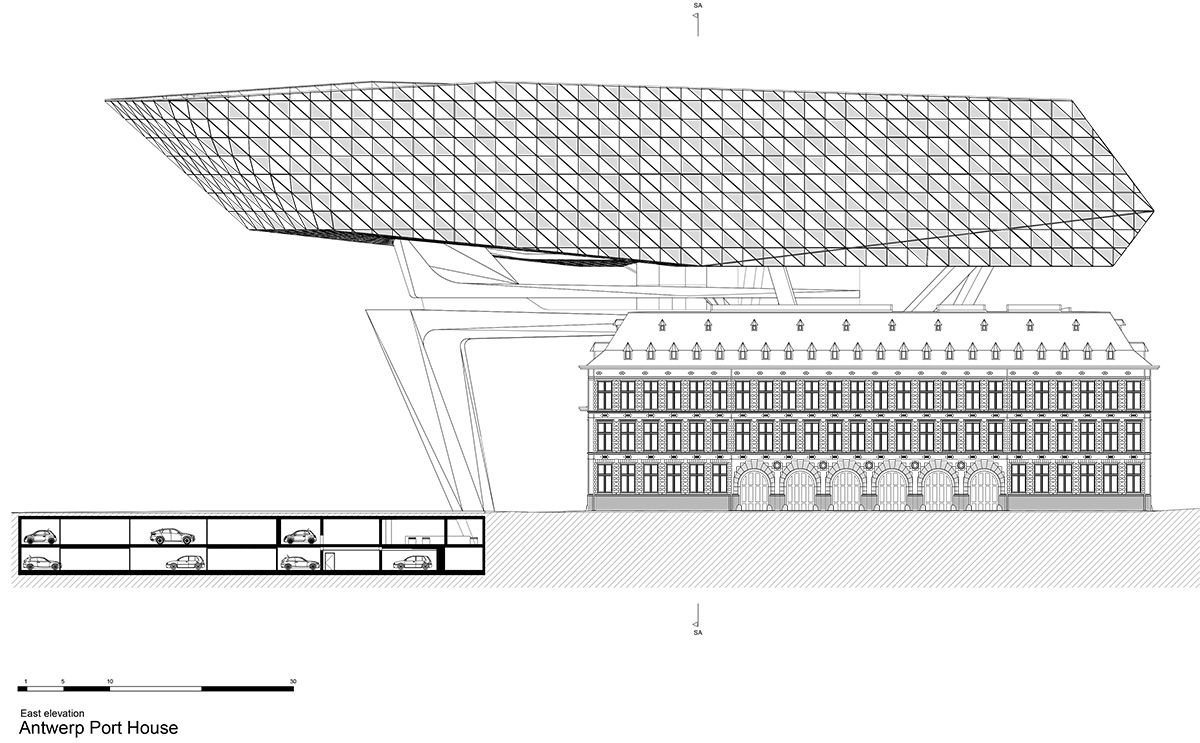 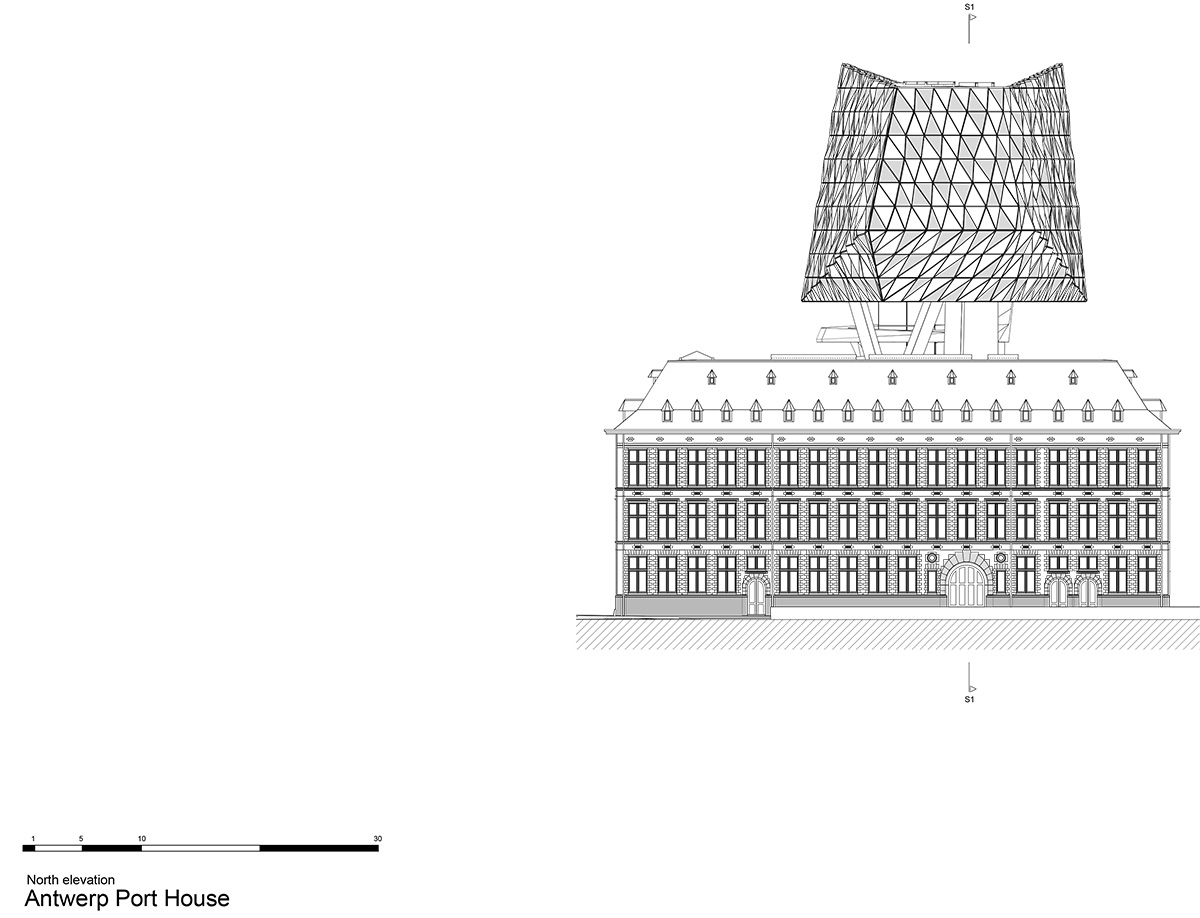