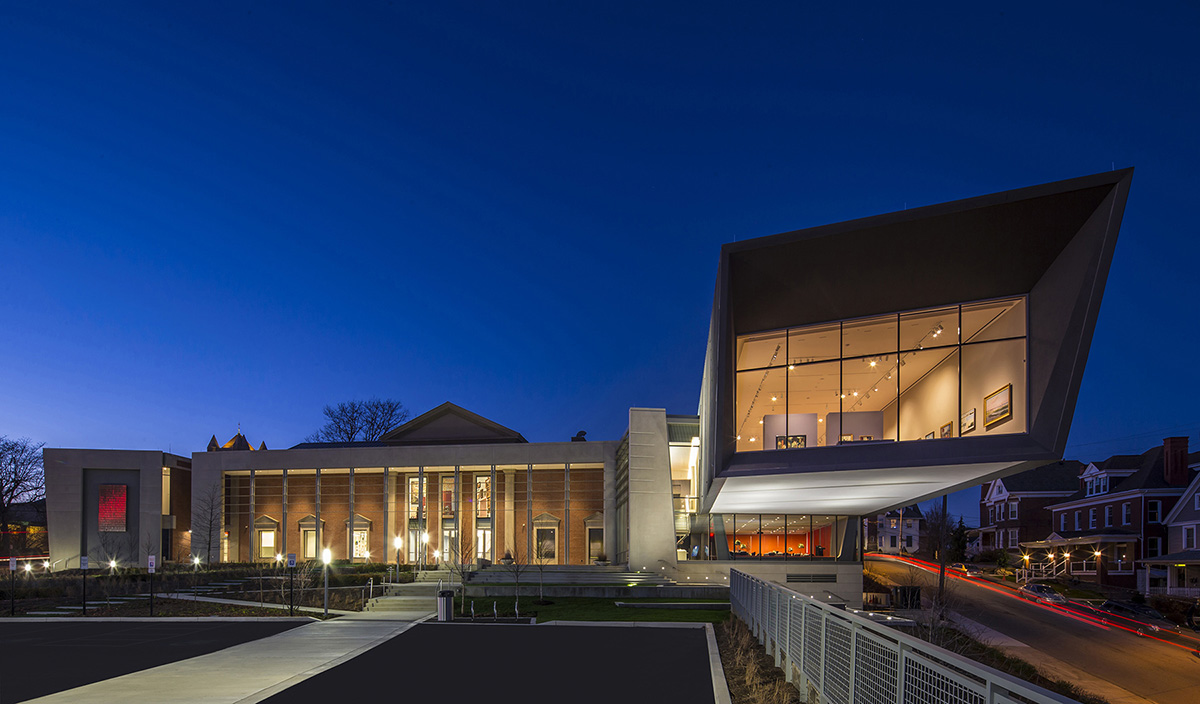 Westmoreland Museum of American Art designed by Susan T. Rodriguez/Ennead Architects Greensburg, Pennsylvania The transformation of the Westmoreland Museum of American Art reinforces the importance of the Arts and the Museum’s vital role in the Greensburg community and the region. The result is an architecturally dynamic building marrying old and new with an expansion that stands as a striking counterpoint to the original neo-Georgian structure. The design strengthens and renews the Museum’s identity and experience while extending its legacy into the future. 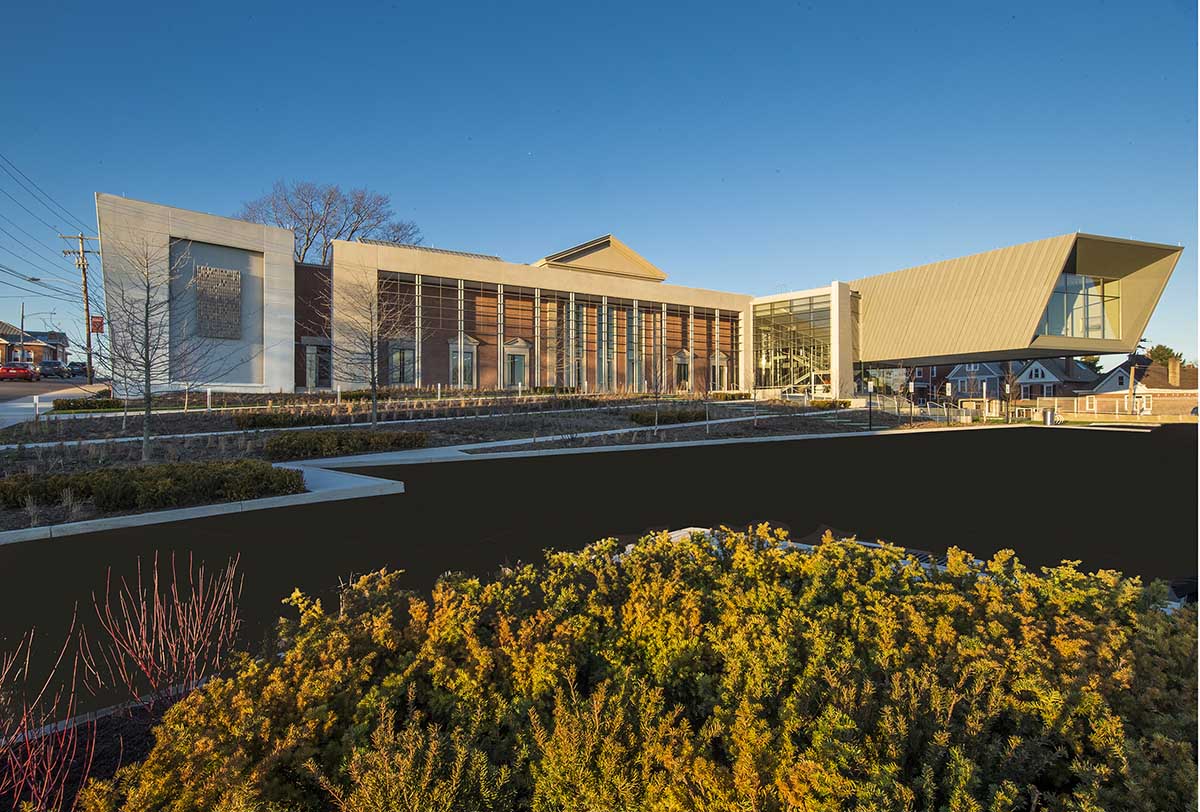 The transformation goes beyond the building itself to the site, where a new landscape and sculpture garden extend the Museum beyond the walls of the building to forge stronger connections to the city and the surrounding neighborhood. The expanded building frames the landscape while providing a transparent backdrop linking interior and exterior and revealing the activity within. Perpendicular to the addition, a new south façade frames the original brick building. This new layer is defined by a plane of pre-cast concrete to match the original limestone of the building and a two-story colonnade of slender paired columns along its entire length. 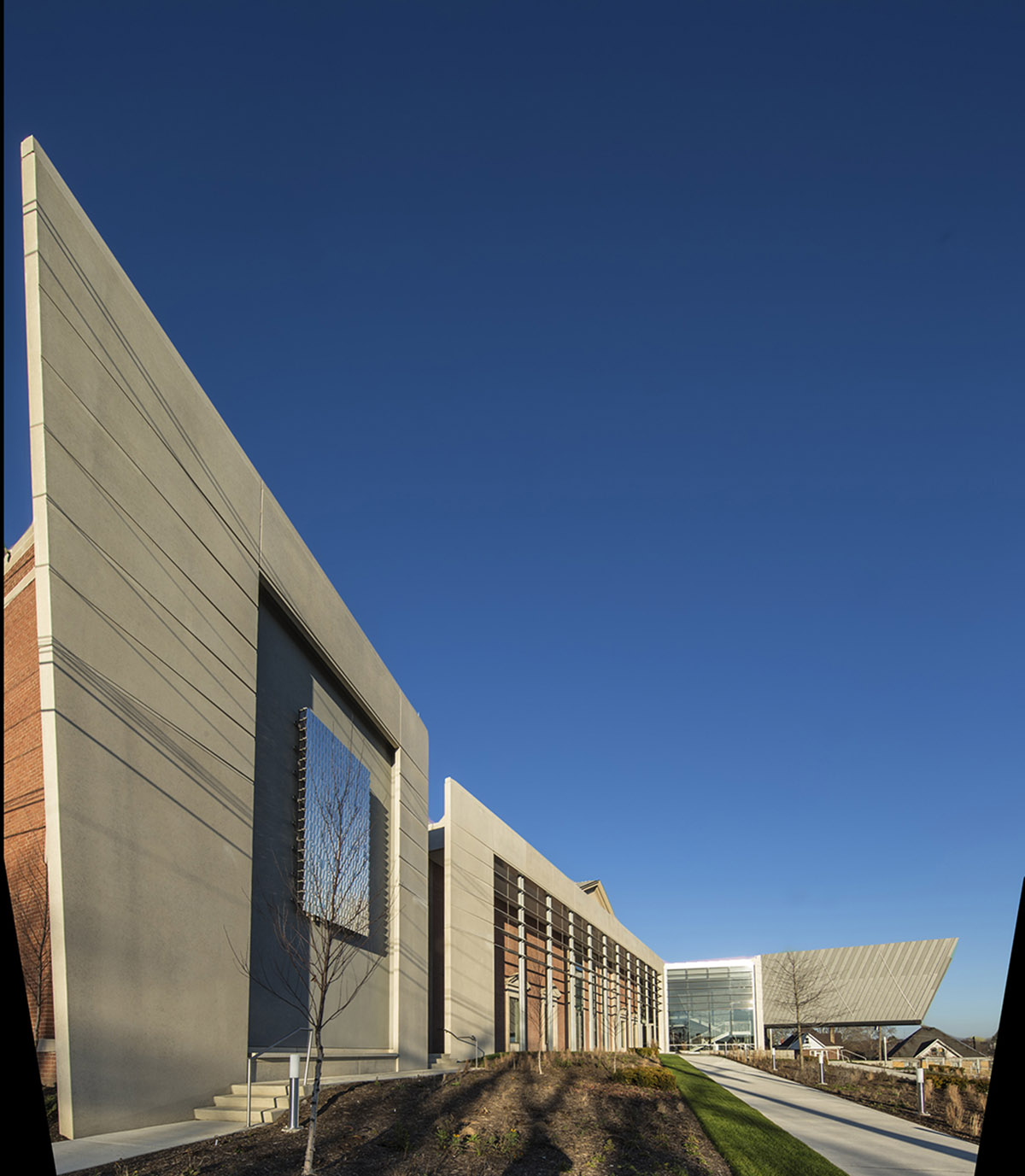 Three new vertical glass openings in the original brick envelope have been created to mark the entry. At the western end of the building, an angled pre-cast plane frames a commissioned sculpture by Tim Prentice, forming a focal point as one approaches the building from downtown along Main Street. A subtle angled opening cut into the solid brick plane along the Main Street façade filters light into the building and provides an initial foreshadowing of the geometry of the cantilever and the new gallery sequence within. 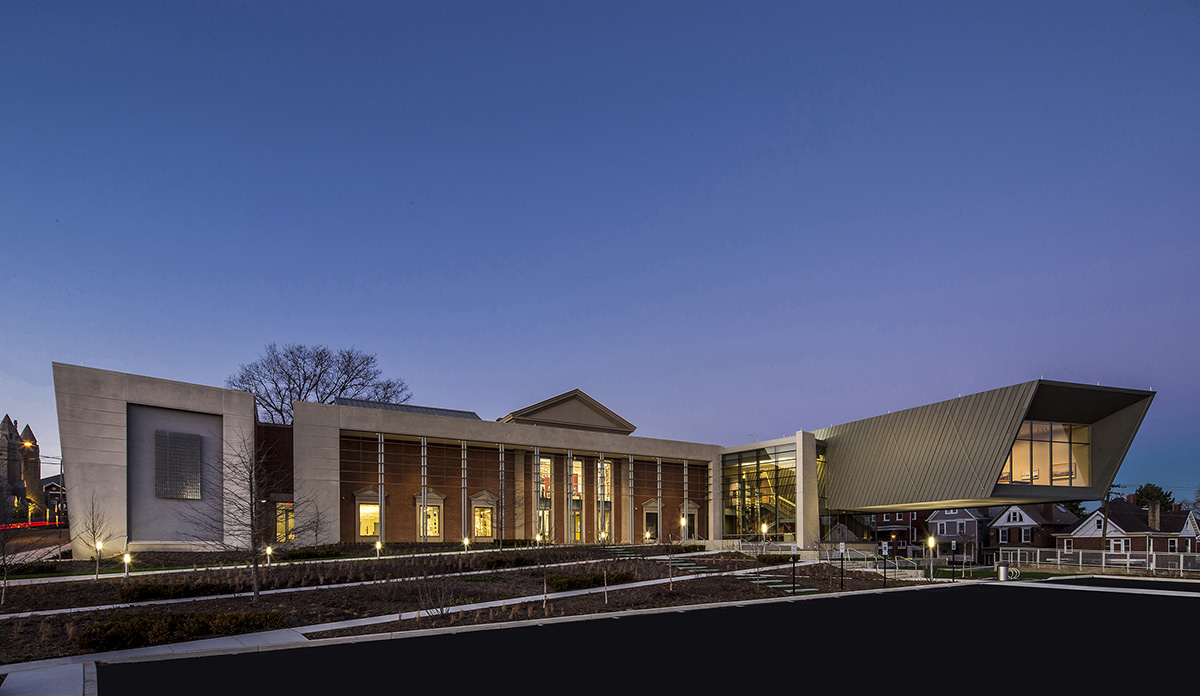 A simple palette of materials and textures—precast concrete, zinc, brick and glass—unifies the expansion with the existing building. At its northern end, and set into the topography of the site, the new brick wing mirrors the west wing to secure the symmetry of the original building while sponsoring a dramatic new zinc-clad cantilever to the south. The pattern of the zinc paneling, which wraps the cantilever, reflects the internal geometry of the truss structure. 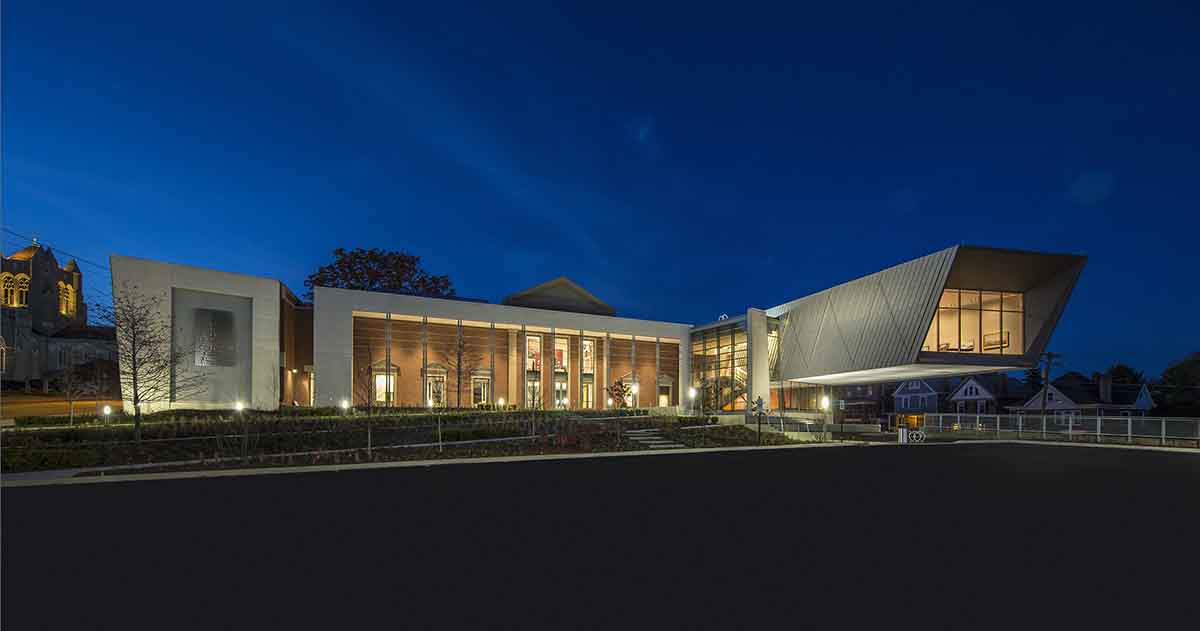 Floor-to-ceiling glass offers panoramic views at the angled terminus of the cantilever, which houses both a new temporary and permanent exhibition galleries. The reinforcement of views to the region and beyond will be heightened as visitors move throughout the building to strategic points within the public spaces and gallery sequence, serving to further contextualize the Museum’s permanent collection. 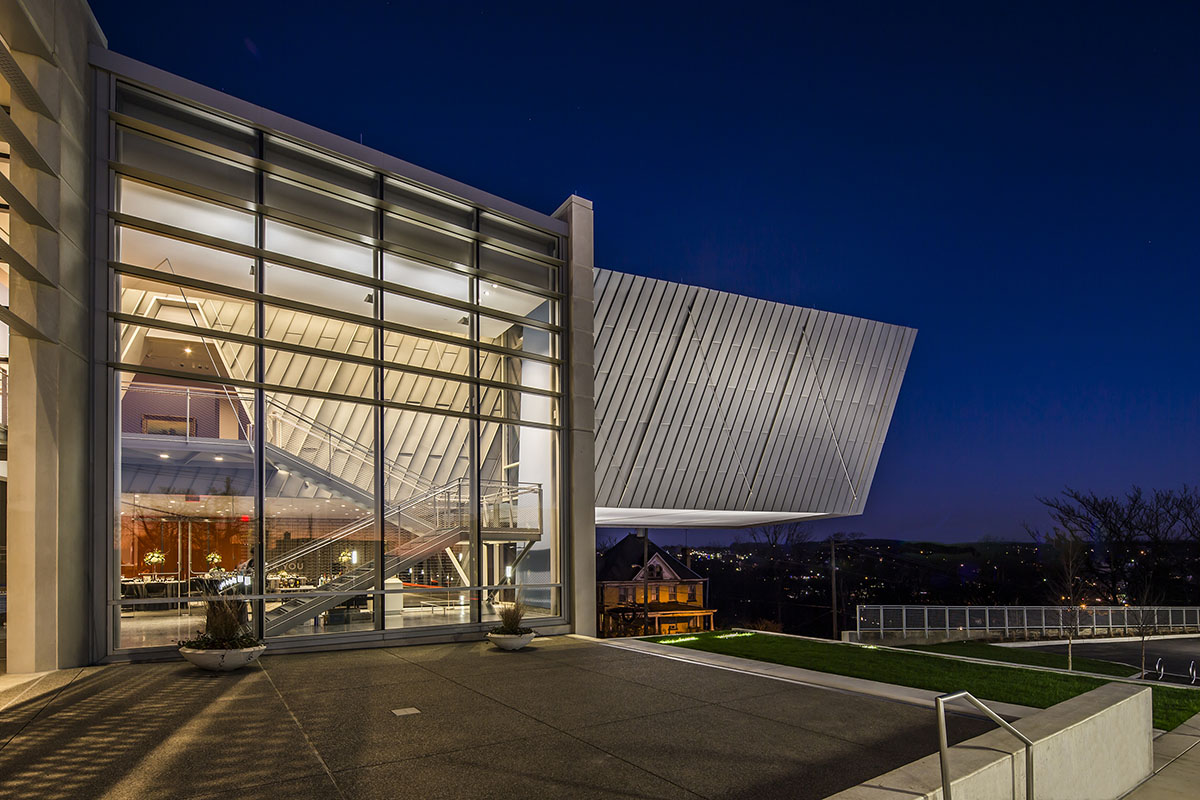 The design reconfigures the interior spaces of the existing Museum to establish a new entry sequence with visual access through the building linking north and south entries. A monumental stair connects the renovated lobby to an enlarged group entry and a new vehicular drop-off. The lobby is framed by a new Museum shop and an introductory gallery. A glass stair set within a new double-height volume leads to the upper level and the cantilever gallery addition. 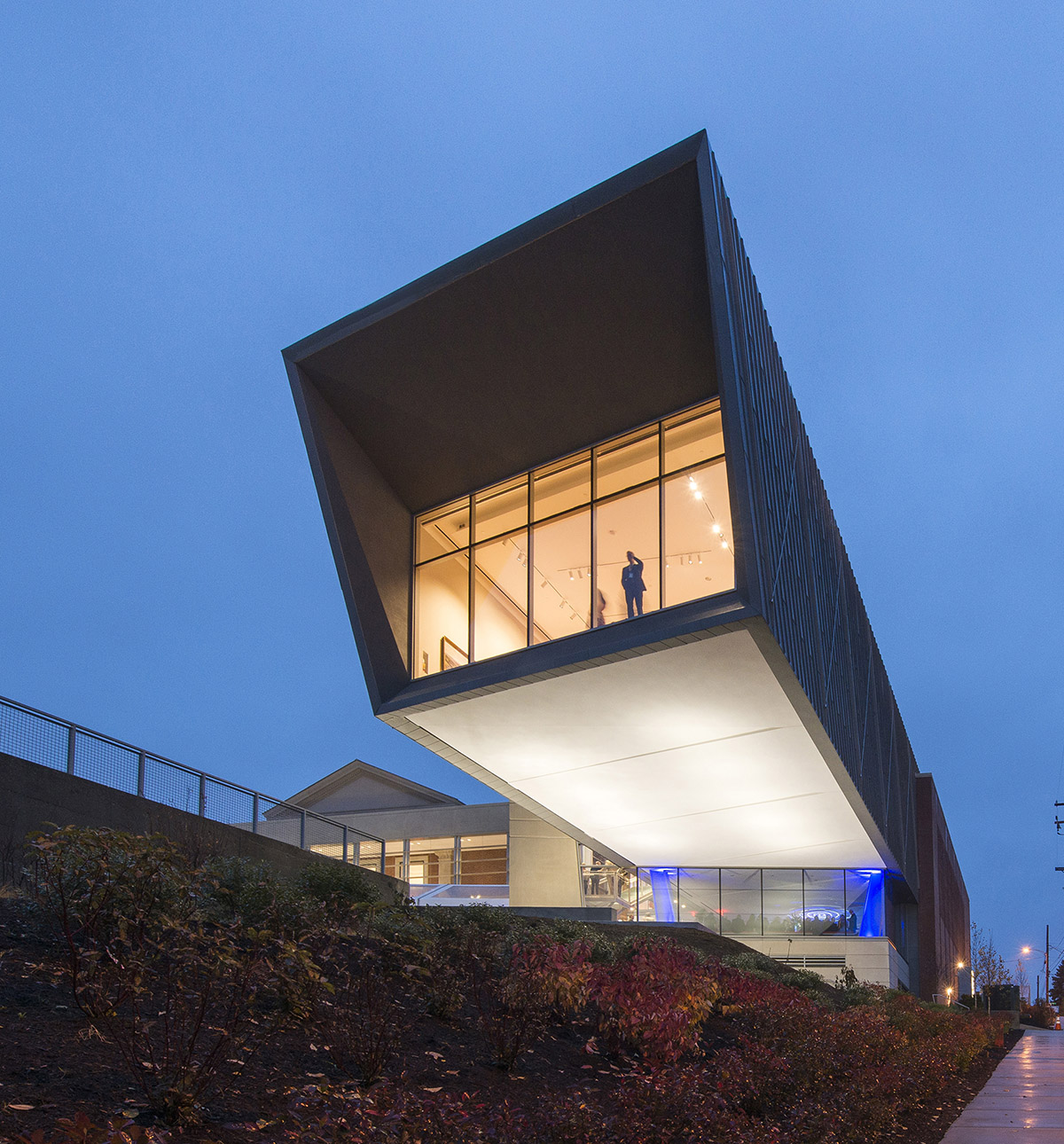 An expanded sequence and range of galleries with views to the exterior unifies the interior spaces and connects the collection to its context. Additionally, a series of small-scale interventions within in the existing building reinforce the underlying geometric language of the cantilever addition. Other spaces within the renewed museum building include a studio for children’s programs, a multi-purpose space for concerts, lectures, community gatherings and private events, as well as an informal café and consolidated administrative offices to foster interaction amongst the staff. A high-density collections storage space is incorporated into the lower level of the expansion and is directly linked to a new dock/receiving area via a freight elevator. 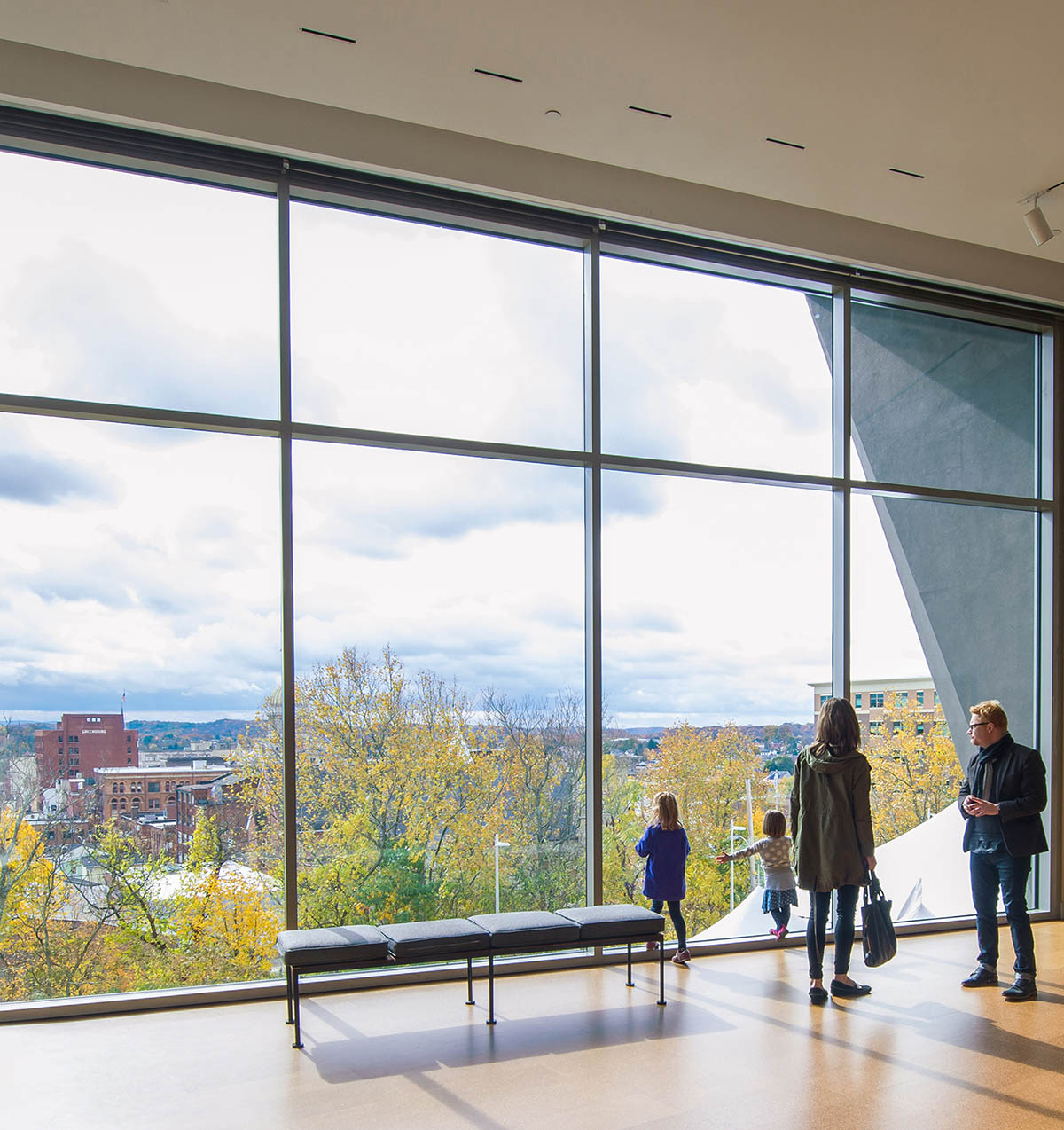 Sustainability is integral to the project, with state-of-the-art mechanical systems incorporated throughout, along with enhanced daylighting and views, locally-sourced materials and a substantial reduction of exterior hardscape with the creation of the sculpture garden. Use of native and adaptive plantings eliminates the need for irrigation. The addition is designed to achieve LEED Silver certification. 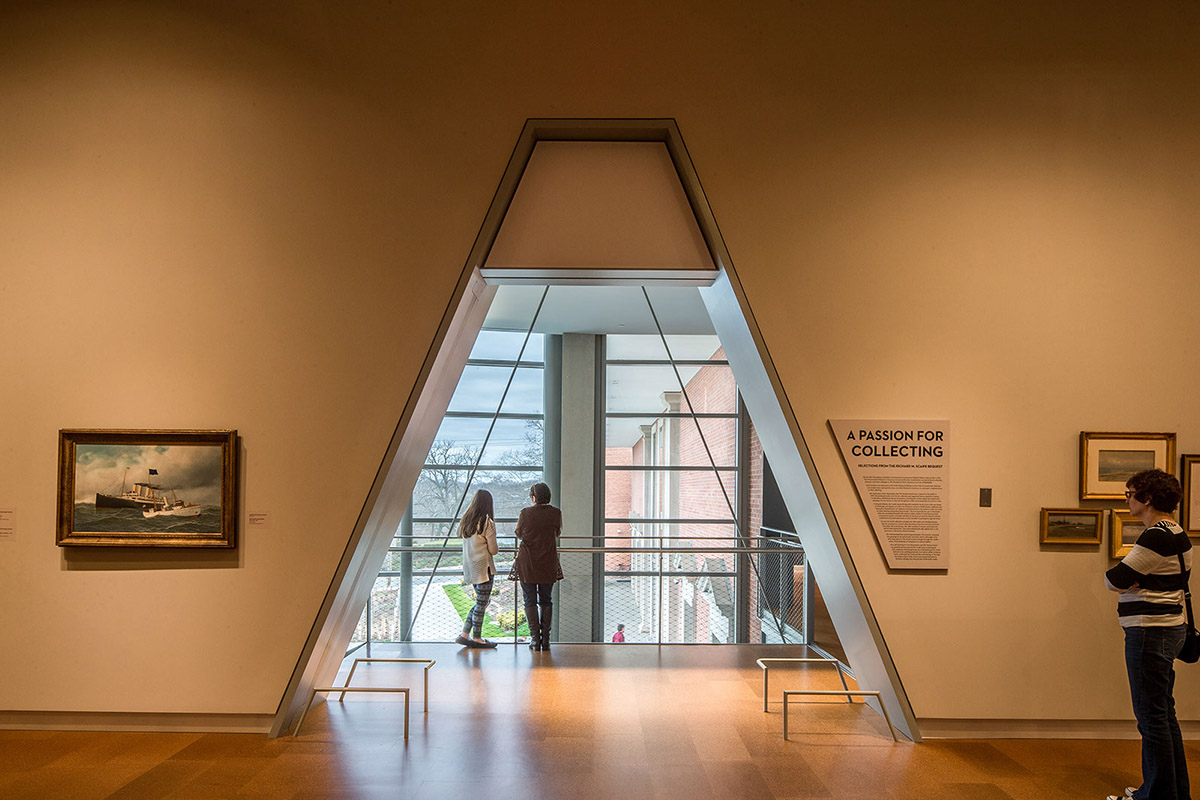 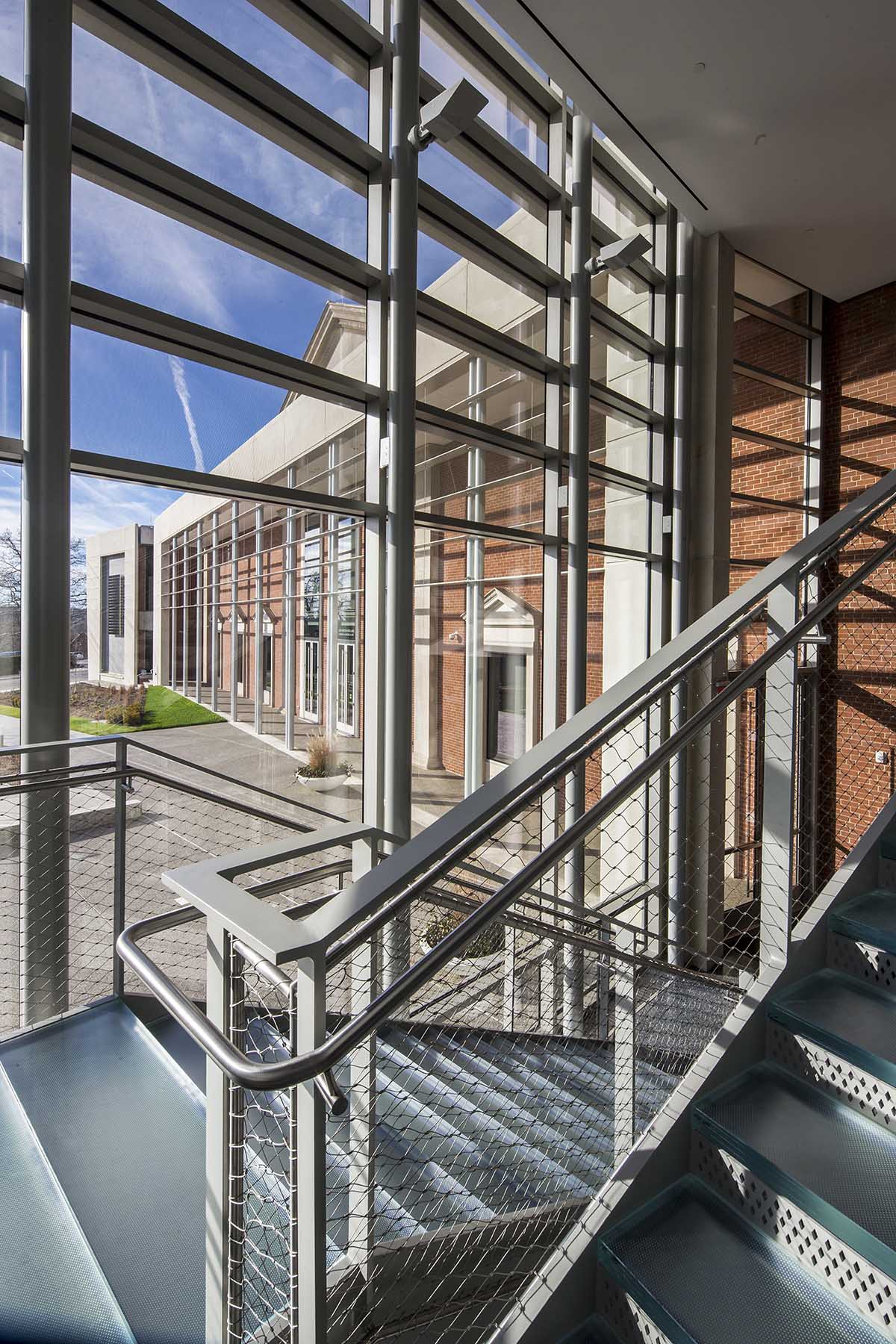 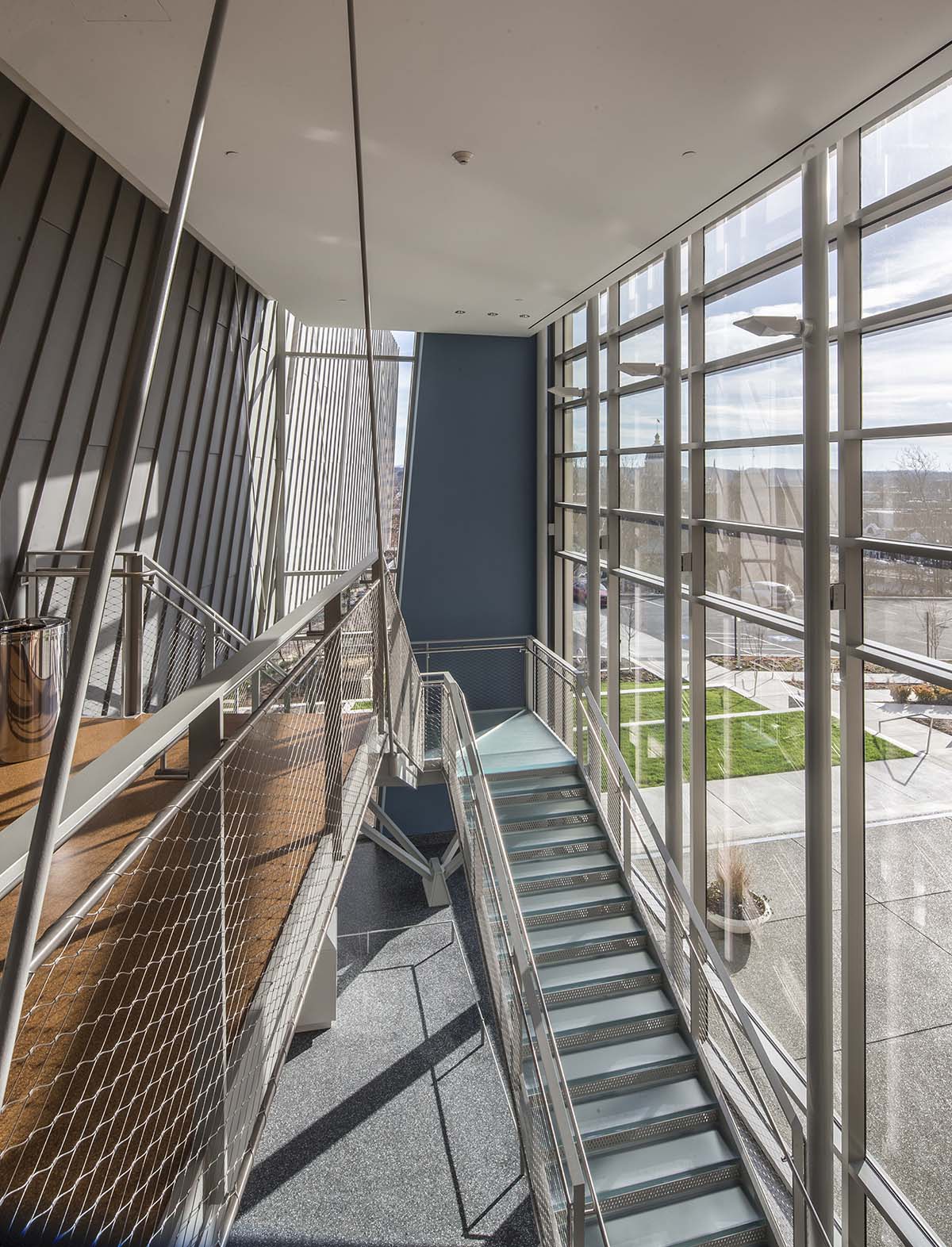 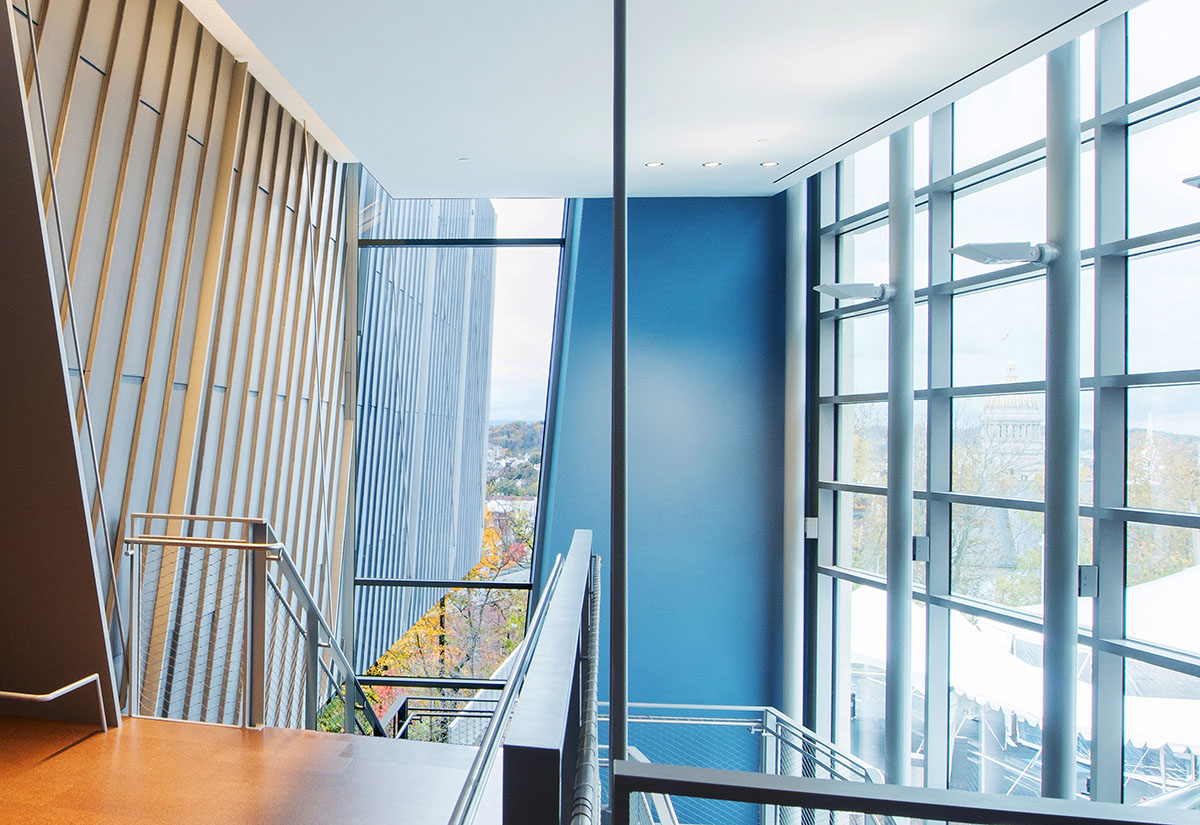 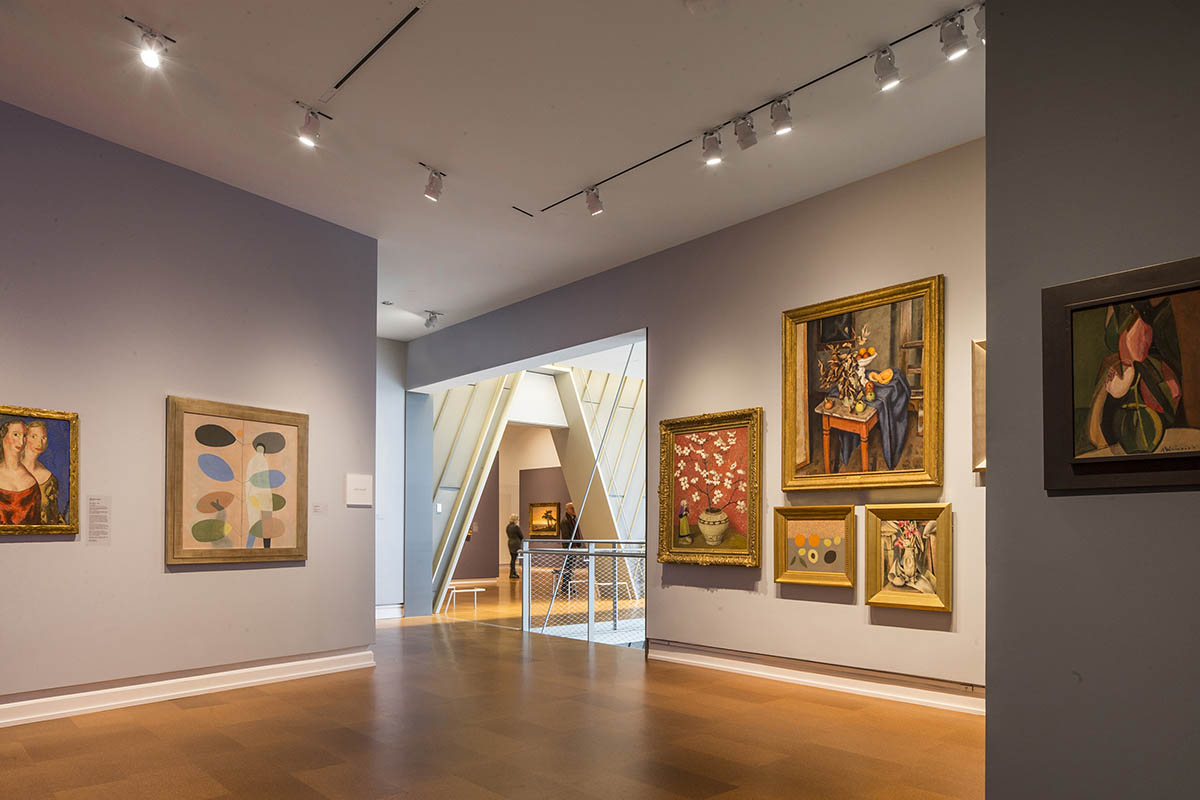 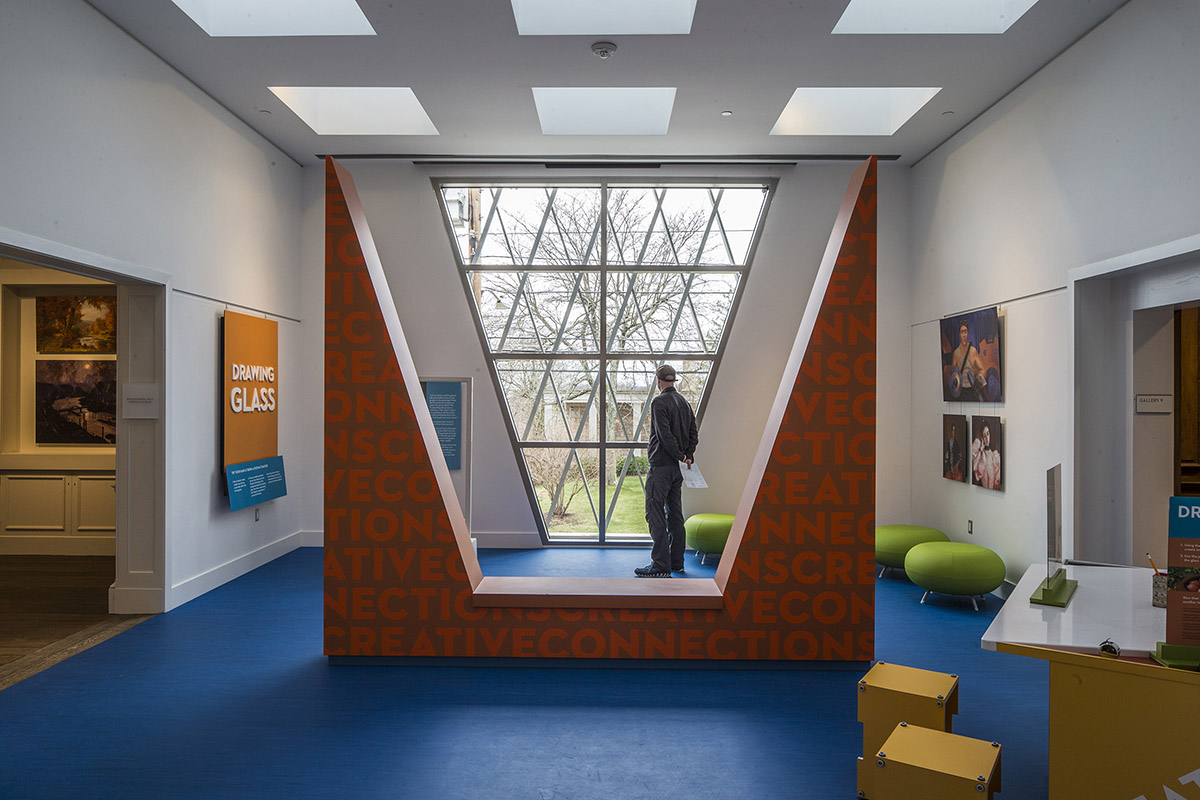 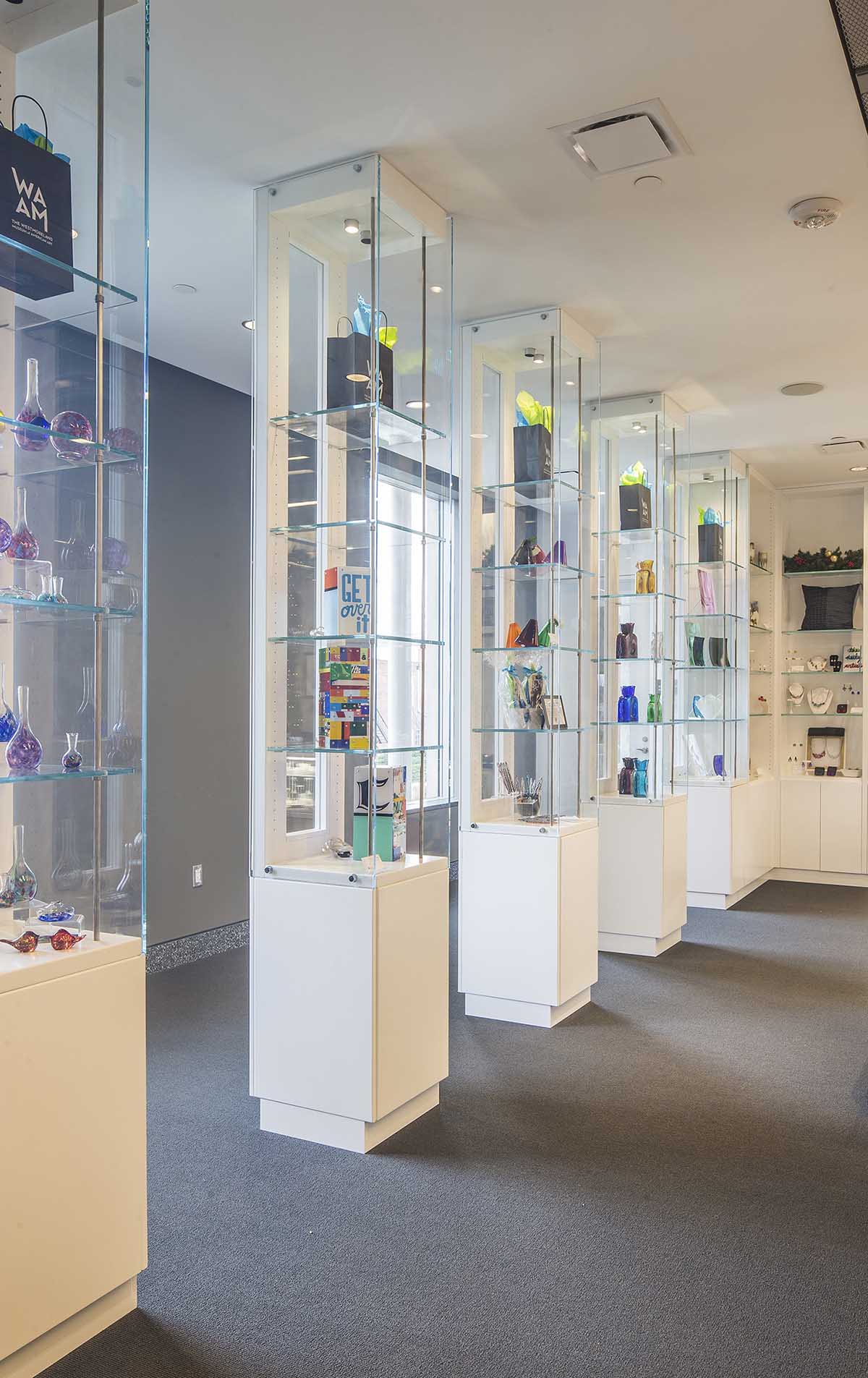 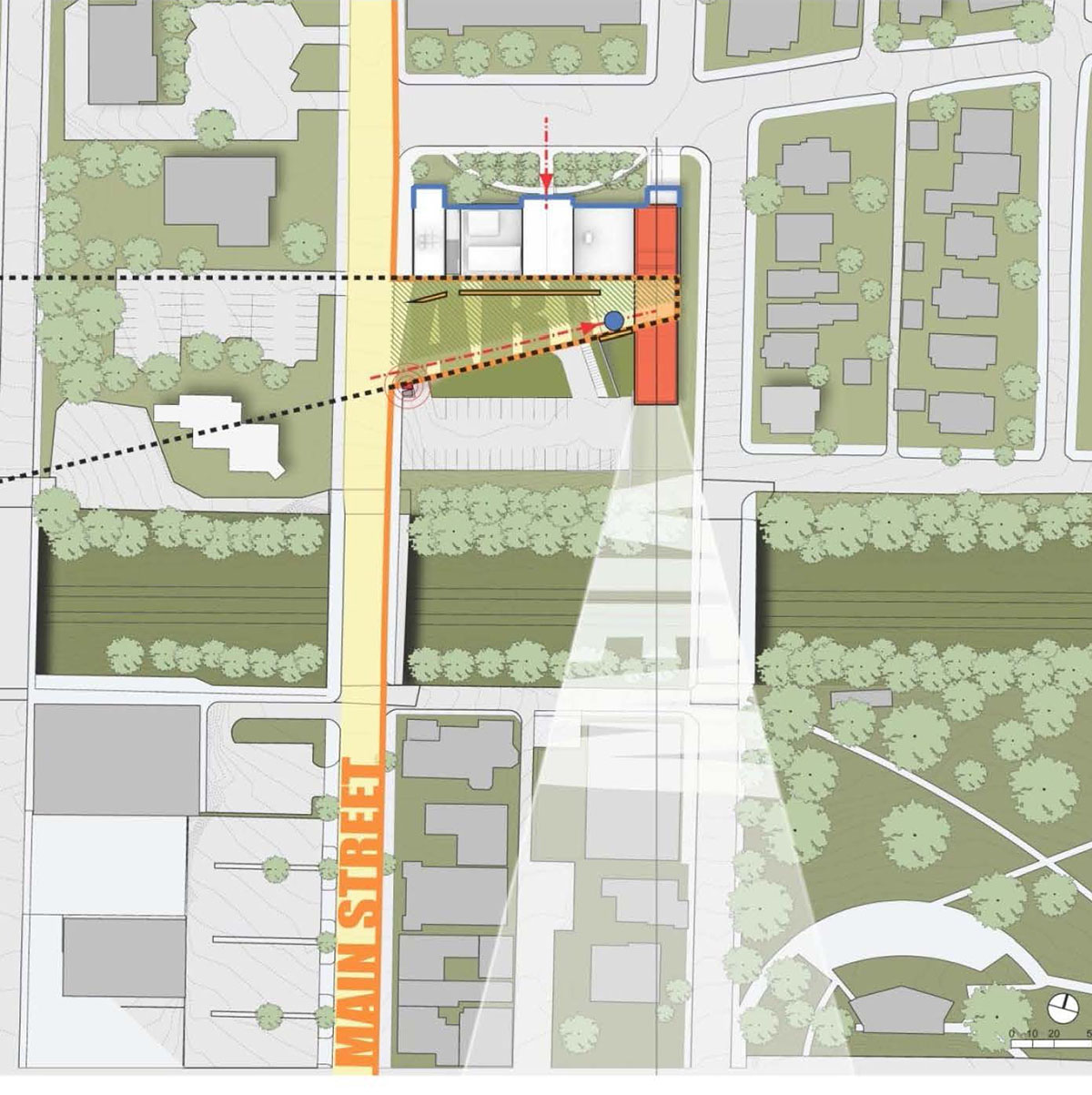 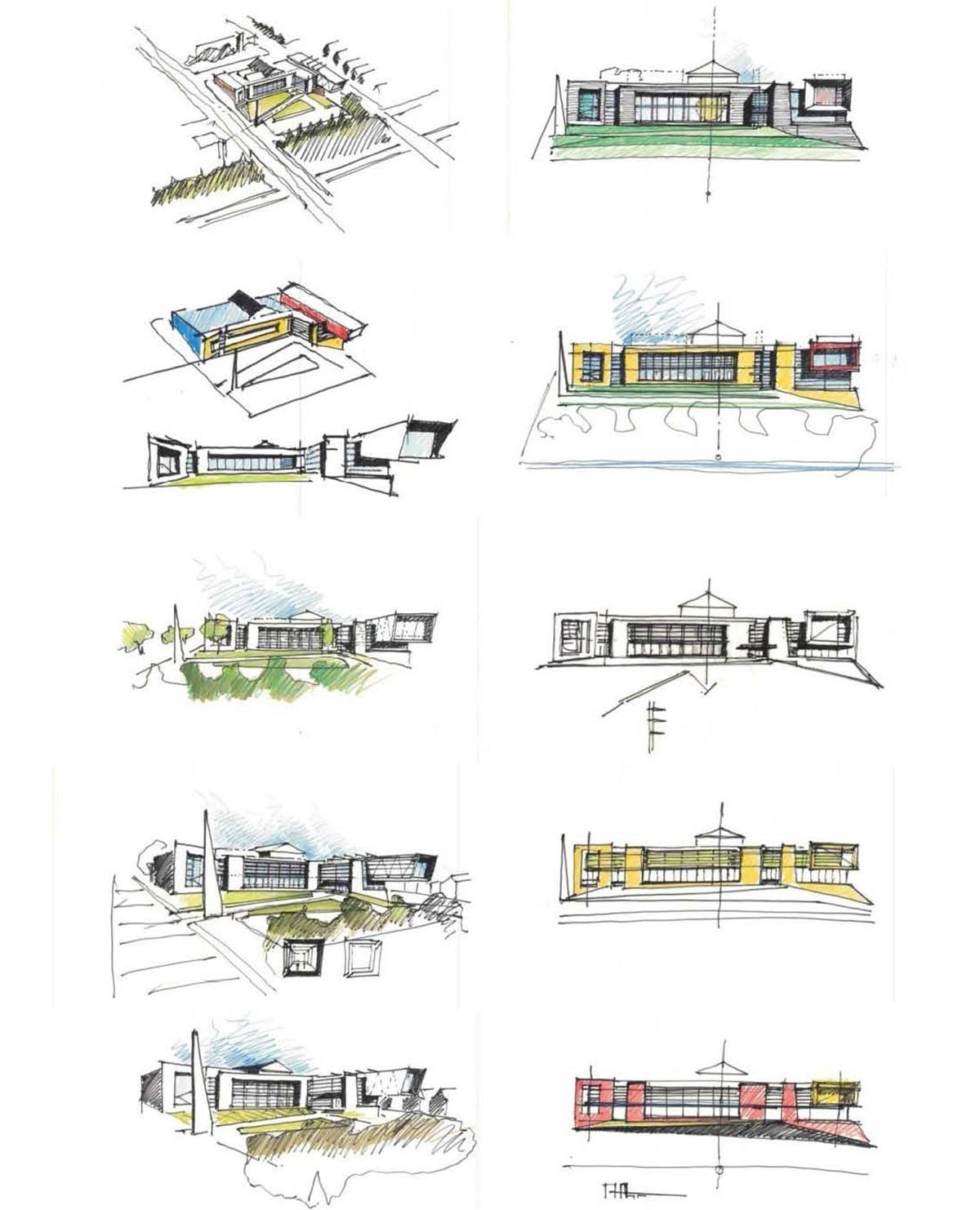