’’STRAIT’’ by Neyran Turan at Salt 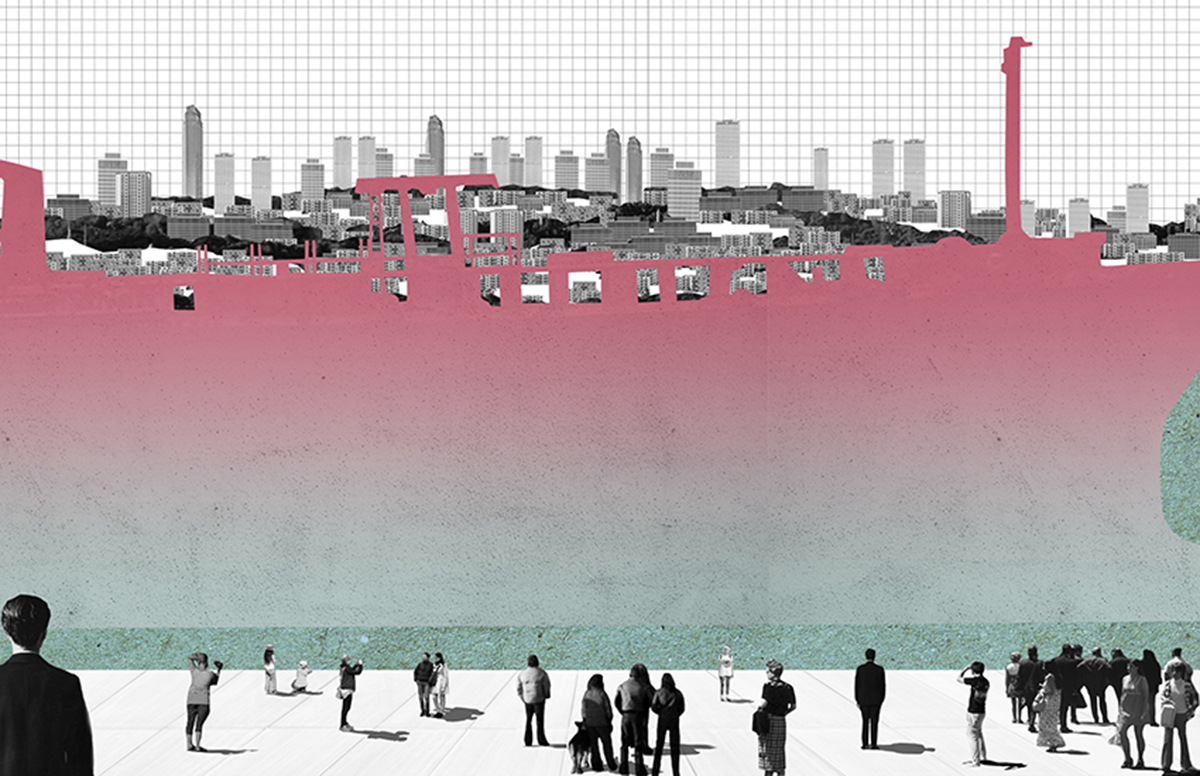 In March 2025, Oilella, the biggest oil tanker in the world, arrived in the city of Istanbul. The gazes of the inhabitants turned toward this colossal object that was slowly passing through the Bosphorus Strait. Image courtesy of Neyran Turan.

In March 1994, a dramatic accident occurred in the Bosphorus Strait, Istanbul. Nassia, a 100,000-ton tanker carrying crude oil from Russia, collided with a cargo ship at the northern exit of the Strait. The cargo ship exploded and ran ashore, while Nassia immediately caught fire and released over 13,000 tons of oil spill into the sea. The fire continued for weeks causing a devastating environmental disaster.

The accident marked a delicate moment in the history of the Bosphorus Strait. After the collapse of the Soviet Union and the opening of the Caspian oil reserves in the 1990s, the Strait became one of the six busiest oil-shipping "choke points," along with the Suez Canal, the Strait of Malacca, Bab-el-Mandeb, the Strait of Hormuz and the Strait of Dover. Compared to these other routes however, the Bosphorus Strait stands unique as it is not only one of the narrowest routes, but also passes through the heart of Istanbul, a city of over fourteen million citizens. What complicates the matter further is the geographic form of the Strait, with its sharp and narrow turns, making it one of the riskiest and most difficult channels to navigate in the world. 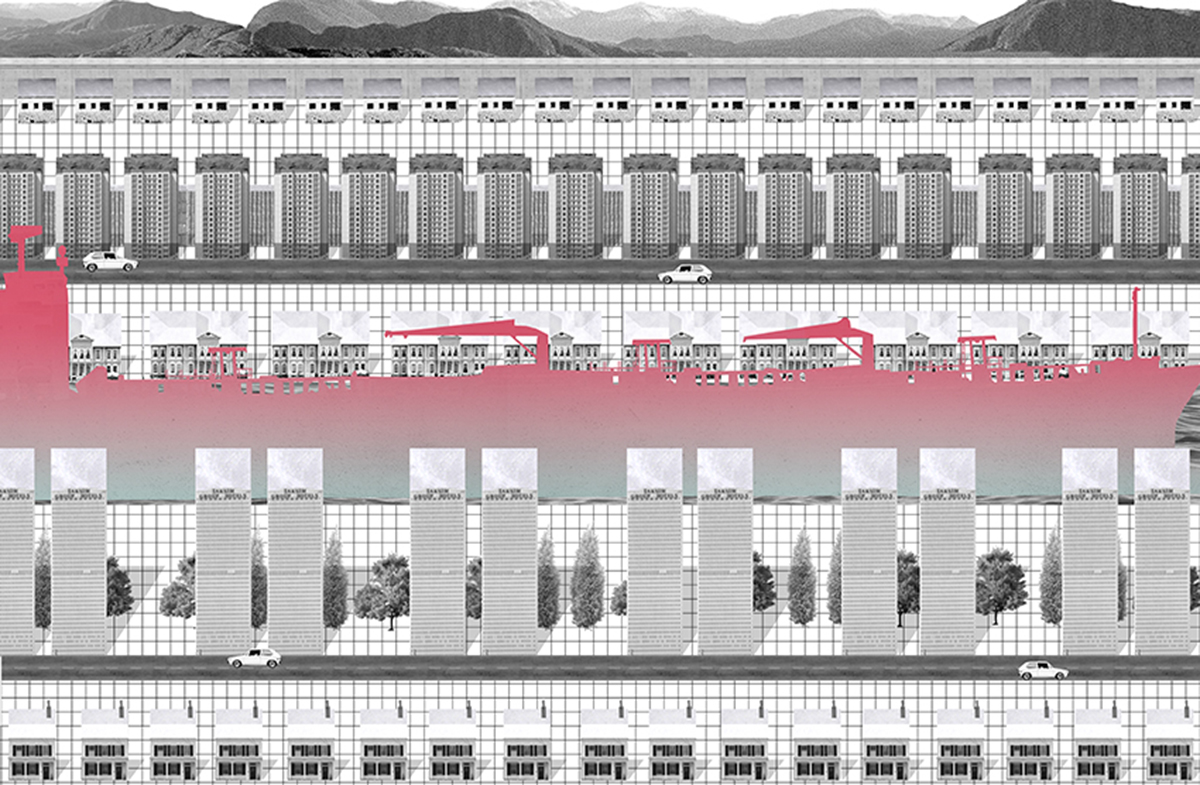 Following the festive spectacle, something unexpected happened. As Oilellacontinued its journey down the Bosphorus Strait, at the narrowest point, it could not move any farther. The oil tanker was stuck! Image courtesy of Neyran Turan.

Recalling sociologist Ulrich Beck's claim that "even the most...moderate objectivist account of risk...involves a hidden politics, ethics and morality," contemporary concerns regarding the transit of colossal oil tankers through this navigational route, have been conflicted with the controversies around transnational energy pipelines and various other large-scale infrastructural and urban transformation projects in Istanbul. During construction after the Council of New Lands’ decree, residents used the top of the Oilella to watch a city under construction and in transformation. From these spots, they were able to witness the archaeology of an era that was about to close. Image courtesy of Neyran Turan.

STRAIT brings this framework to architectural and public imaginaries by manifesting the Bosphorus Strait through the tangible experience of an installation object. It introduces the idea of the geographic object, in this instance, an extrusion of the Strait shorelines without articulating its actual topography. By rendering the Bosphorus as a constricted experiential condition, the project positions geographic scale as an architectural problem. The STRAIT object amplifies the interplay between architectural and geographic scales by re-constructing the crenelated shorelines of the Bosphorus through local crown moulding [kartonpiyer] profiles, an ornamentation technique typically applied to the corners of interior ceilings. 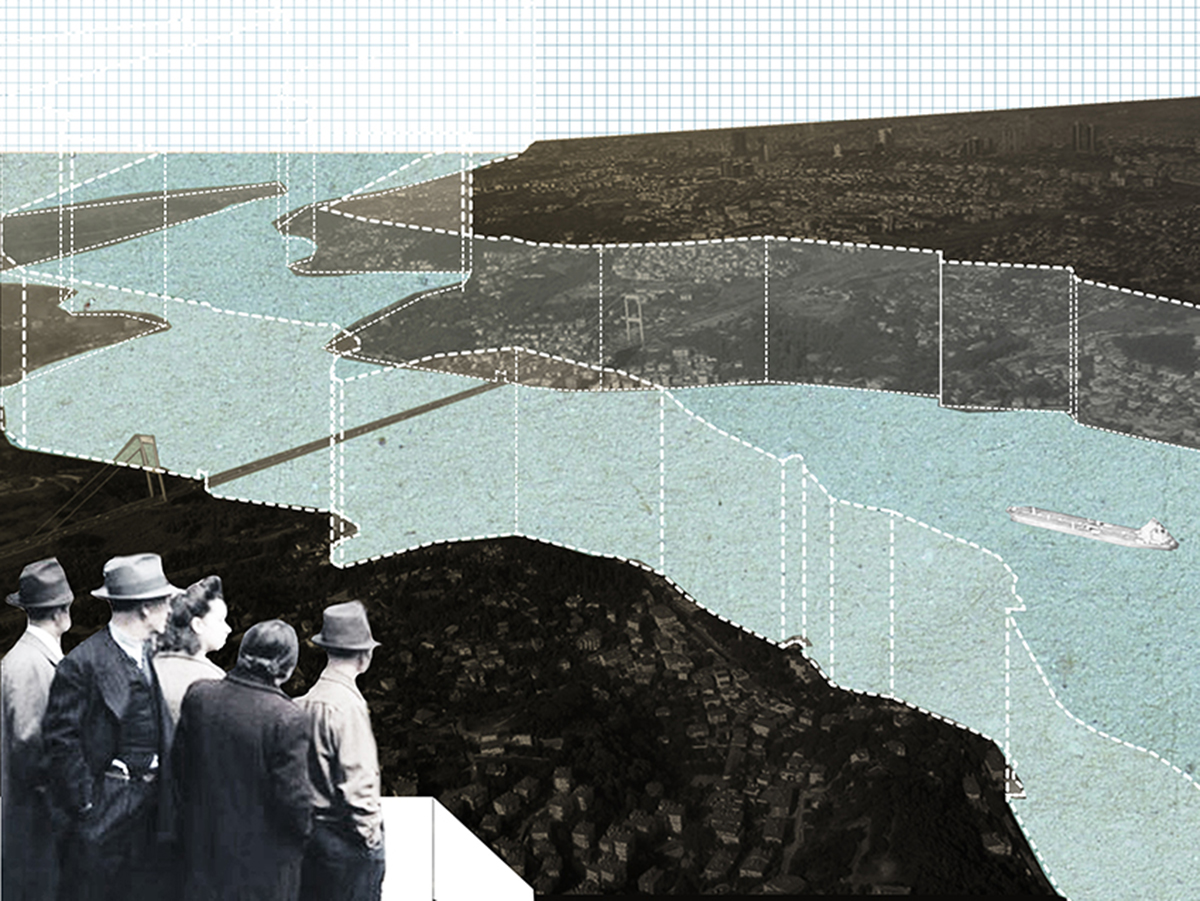 Because the tanker was stuck, the Strait was blocked, allowing no further passage. The Council of New Lands immediately saw this as an opportunity. They thought, if the Bosphorus could no longer function as a passage between the two seas, perhaps it could be repurposed. Excited about the possibility of a new and prosperous land of development, the council started organizing territorial surveys to see how this water passage could be transformed into land. After months of inspection, planning and feasibility studies, it was decided that a giant landfill be constructed in place of the Bosphorus waterway. Image courtesy of Neyran Turan. 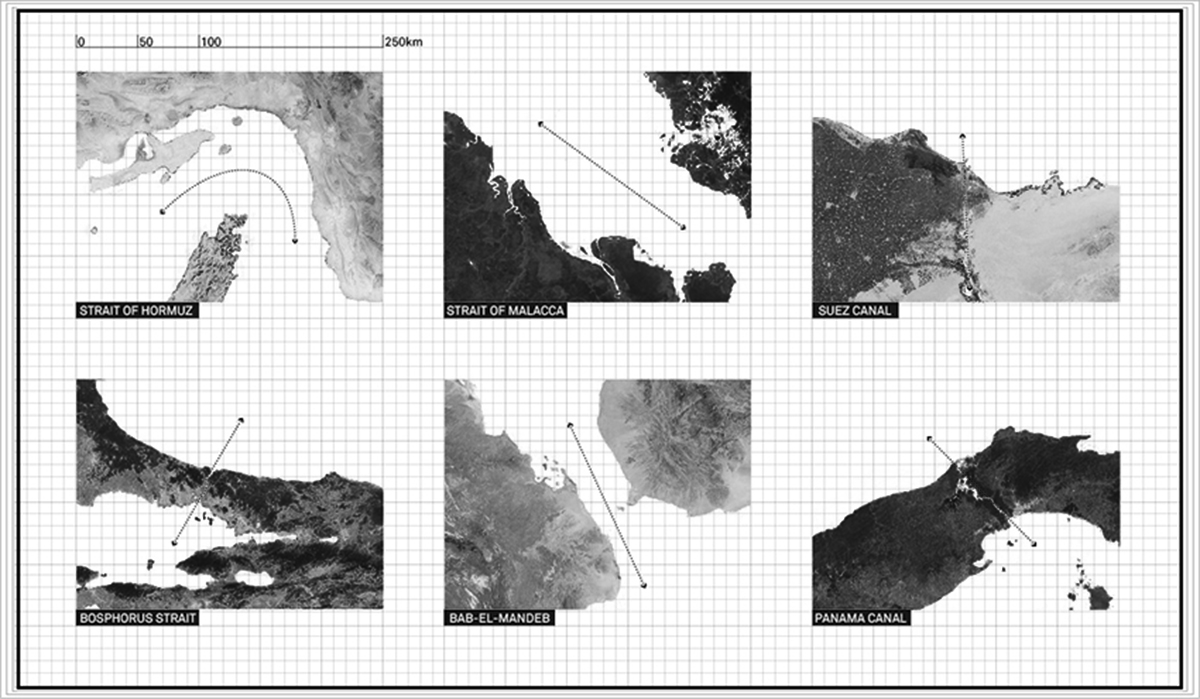 The Bosphorus Strait among other important oil-shipping “choke-points.” Image courtesy of Neyran Turan. 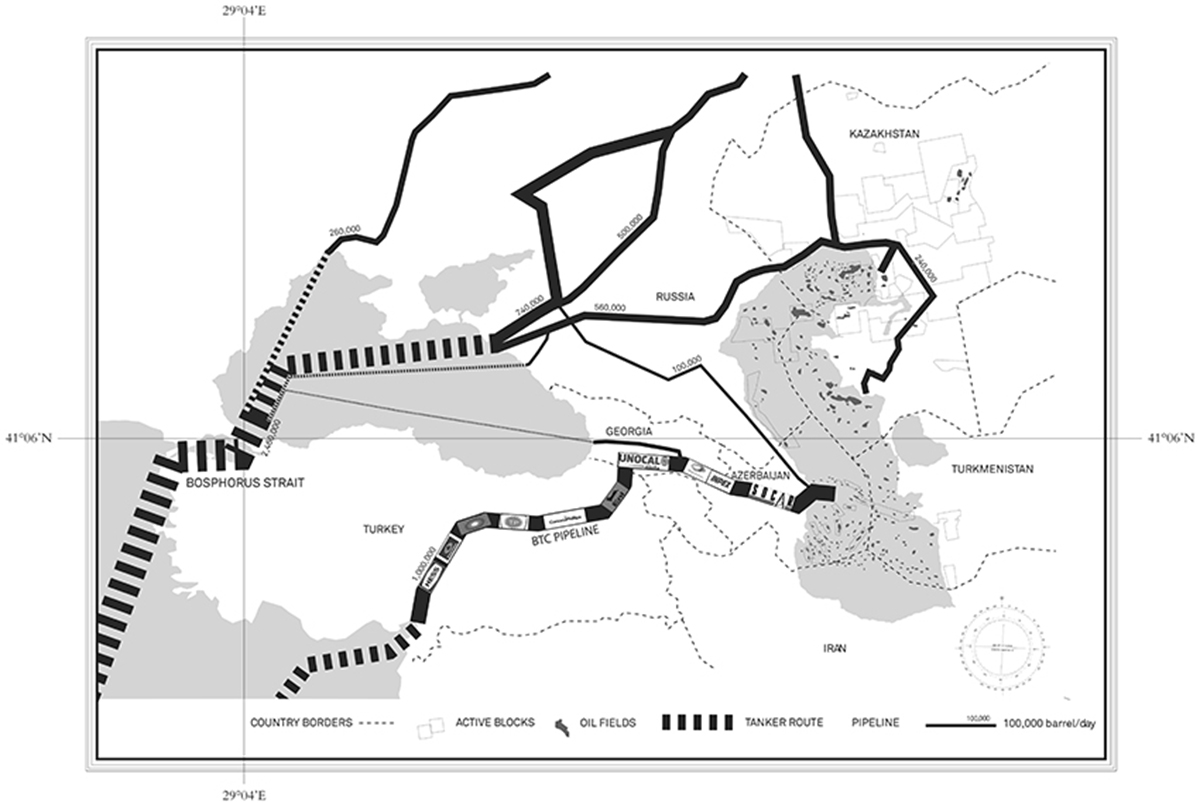 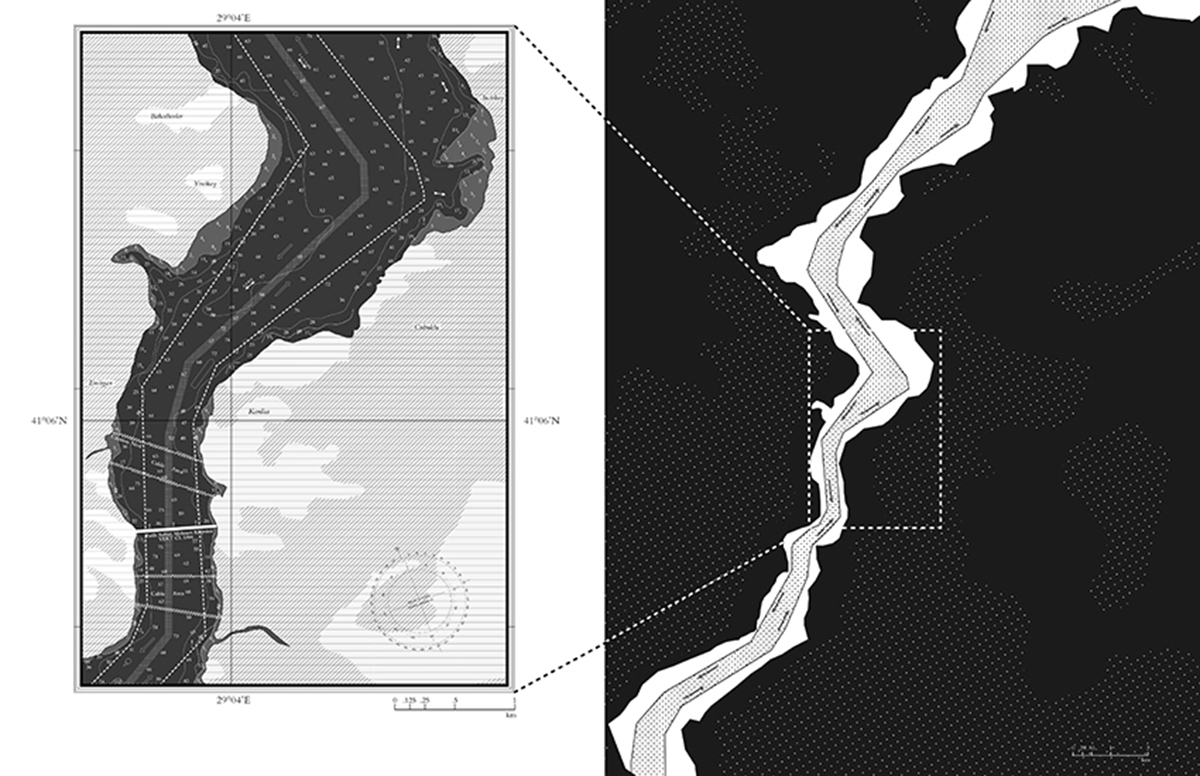 Navigational oil-shipping route at the Bosphorus Strait and its proximity to the city. Image courtesy of Neyran Turan. 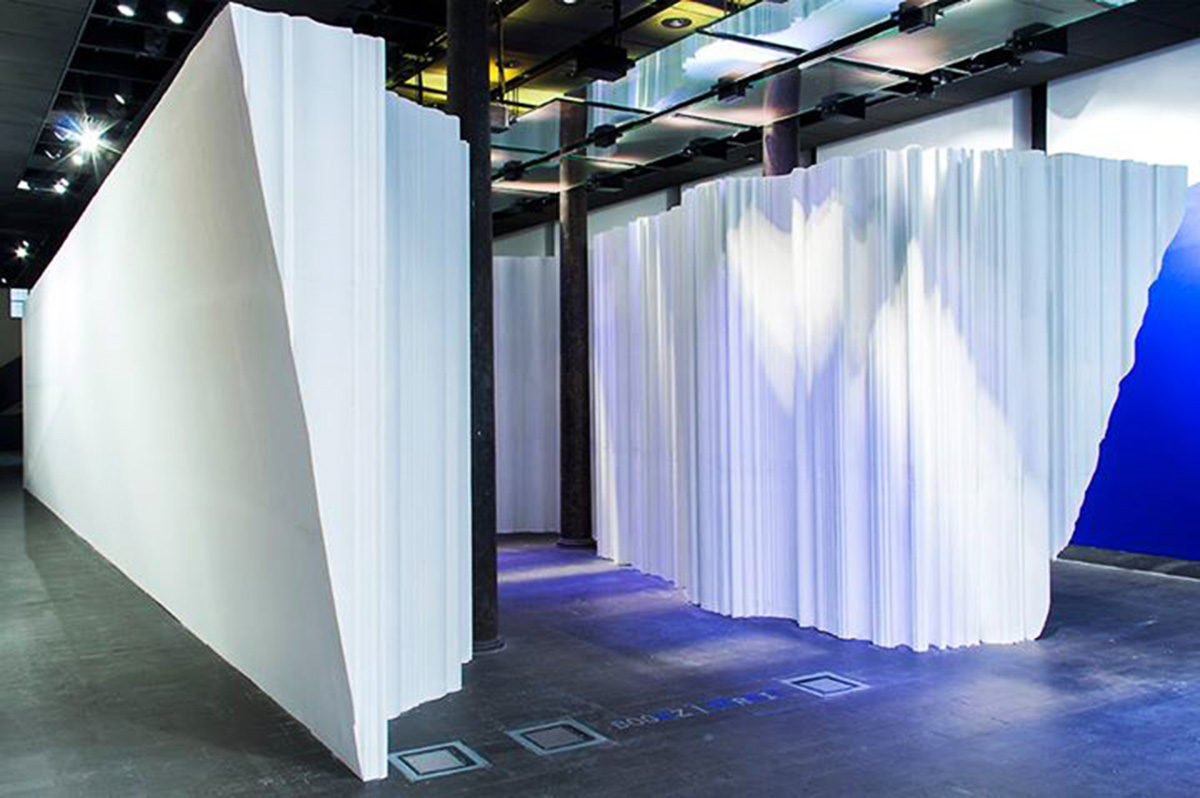