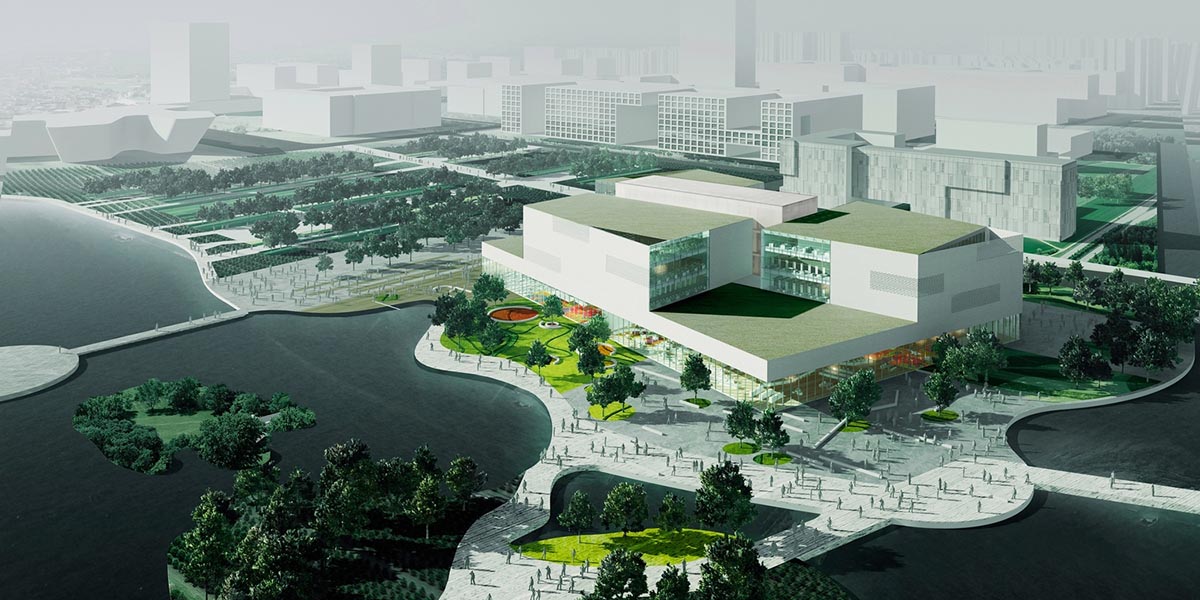 Last week, a ground-breaking ceremony was celebrated for the new 30,000 square metre central library in Ningbo, China. Participating the ceremony were the head of the Ningbo City Cultural Bureau, Ningbo Library, Ningbo Urban Planning and Construction Design Institute, and schmidt hammer lassen architects who won the competition in 2013 to design the 240 million RMB (€ 29 million) Central Library in the eastern port city of Ningbo.

The Ningbo City Library was founded in 1927 and although it holds a collection of approx. 1.7 million books it can only hold half its collection in the current library. This includes the largest collection of historic and ancient books in the region. The new 30,000m2 library will house the entire collection under one roof, with expansion to over 2 million books.

exterior view of the library

The current library attracts 3-4000 visitors per day (similar to that of the Royal Library in Copenhagen) and the aim is that with the new library this will increase to 7-8000 visits per day. To deal with this increase in visits the new library will contain 3000 permanent workspaces and seats. Located at the heart of Ningbo New East Town the new library sits on the edge of a new ecological wetland area that will form the cultural hub for the new east town. 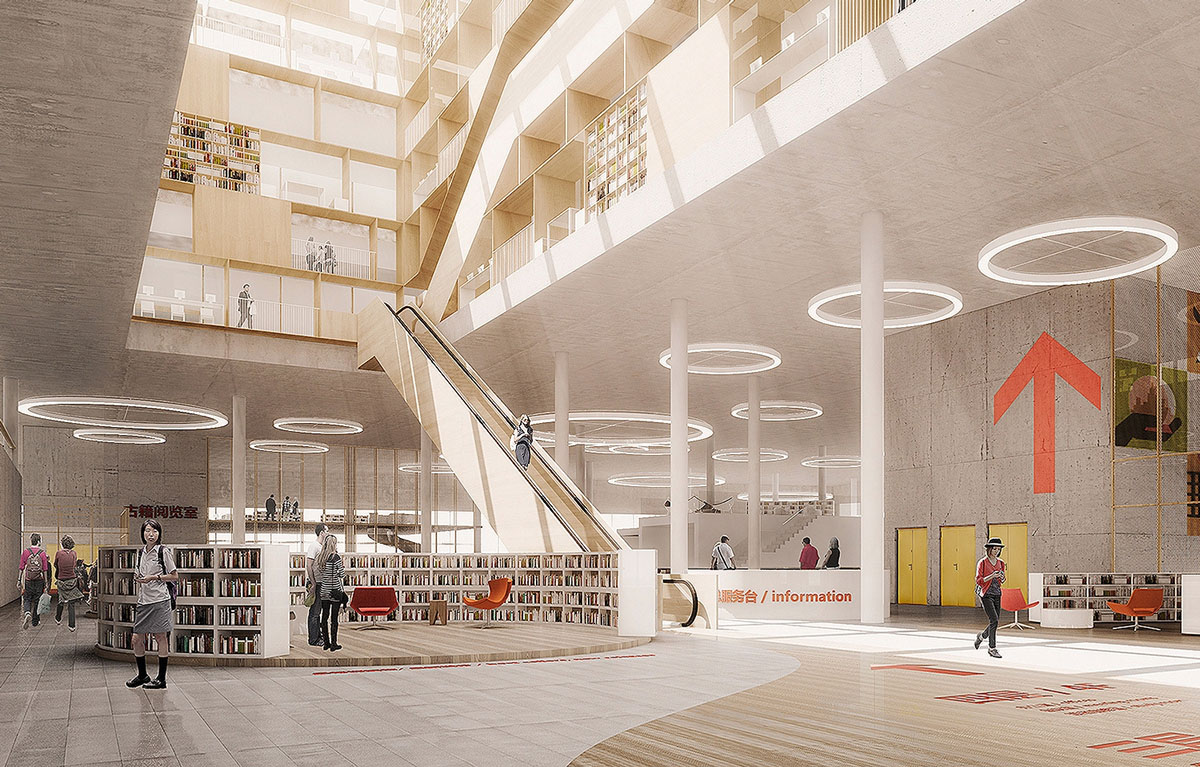 interior of the library

Partner and Director of Schmidt Hammer Lassen's office in Shanghai, Chris Hardie, says: “We’re exciting to see the Ningbo Library start on site. The past year has been interesting with our two Canadian libraries, Halifax Central Library and Edmonton Highlands Branch Library opening last year with great success,the announcement of our design for Christchurch Library in New Zealand and the Dokk1, Scandinavia’s largest library, which opened last week. Now we will see our first library in China begin to take shape here in Ningbo. Given our great collaboration with the Local Design Institute and the client team, we are full of confidence that the Ningbo New Central Library will become a vibrant new public space for the citizens of Ningbo.” 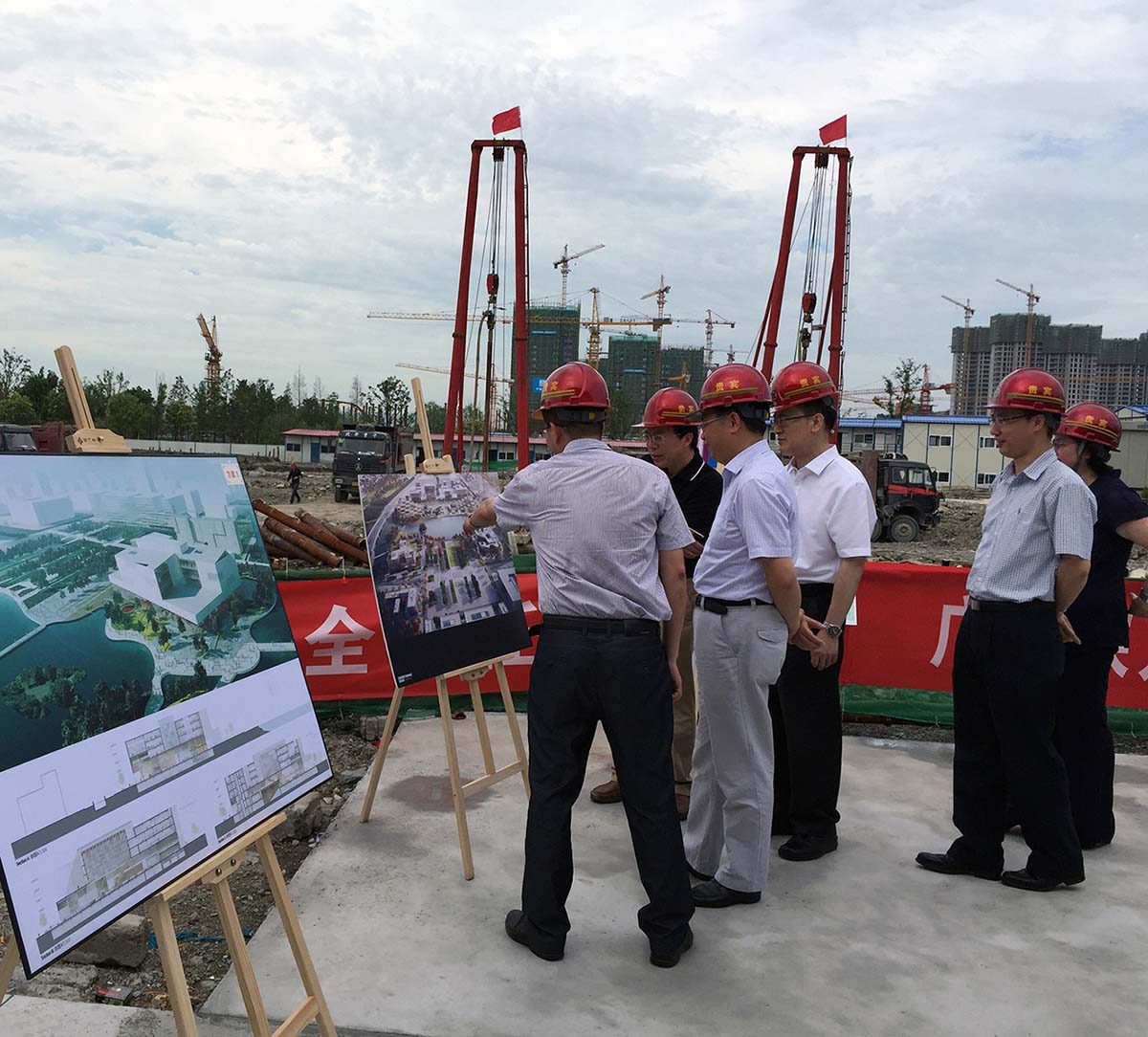 The library is organised around a single open 8,000m2 marketplace containing the most popular library functions and collections at ground floor. The marketplace is visually open on all sides connecting to a public plaza, and a landscaped ecological park and lake, thus ensuring all interior spaces have a direct connection with outside. This open democratic approach too public libraries is very much part of the ethos of schmidt hammer lassen’s architecture and a theme that can be seen in many of our completed library projects in Scandinavia and Europe.

At the heart of the library is a central atrium in the form of a giant book stack containing study desks, reading booths, internet stations and media spaces. This generous 28m high space connects the open marketplace at ground level to a series of more private research and historic collections above. The central bookstack will bring natural light deep in to the heart of the library during the day and act as an urban lantern after sunset.

The Ningbo library is one of three Schmidt Hammer Lassen projects currently on site in Ningbo; Ningbo Home of Staff, a 104,000 m2 unique new cultural home for the city Labour Union in Ningbo and Ningbo Daily, the 110,000 m2 new headquarter for Ningbo Daily Newspaper Group. Besides the three projects on site in Ningbo, the studio has several projects on site in Shanghai and throughout China, including the Green Valley development next to the Chinese Pavilion for the Shanghai 2010 EXPO and a major Call Centre facility for China Mobile scheduled to open later this year.