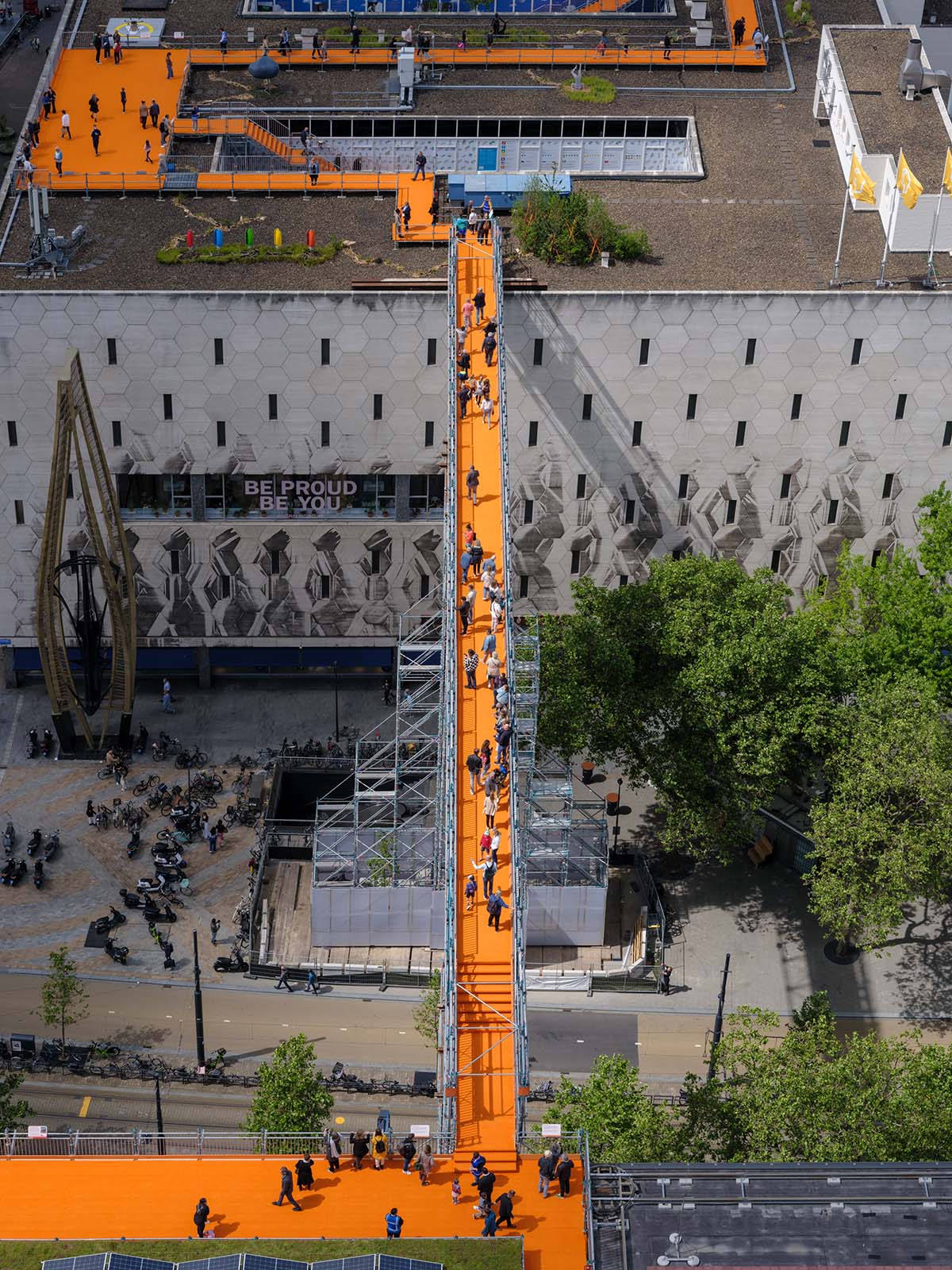 MVRDV and Rotterdam Rooftop Days have designed a 600-metre-long aerial bridge that lead visitors on different rooftops of the city in Rotterdam.

Opened to the public on Ascension Day, 26 May, the orange carpet spans across a variety of the city’s rooftops at a height of 30 metres along the roofs of World Trade Centre (WTC) Rotterdam and the Bijenkorf department store, ending on the roof of the Q-Park parking garage. 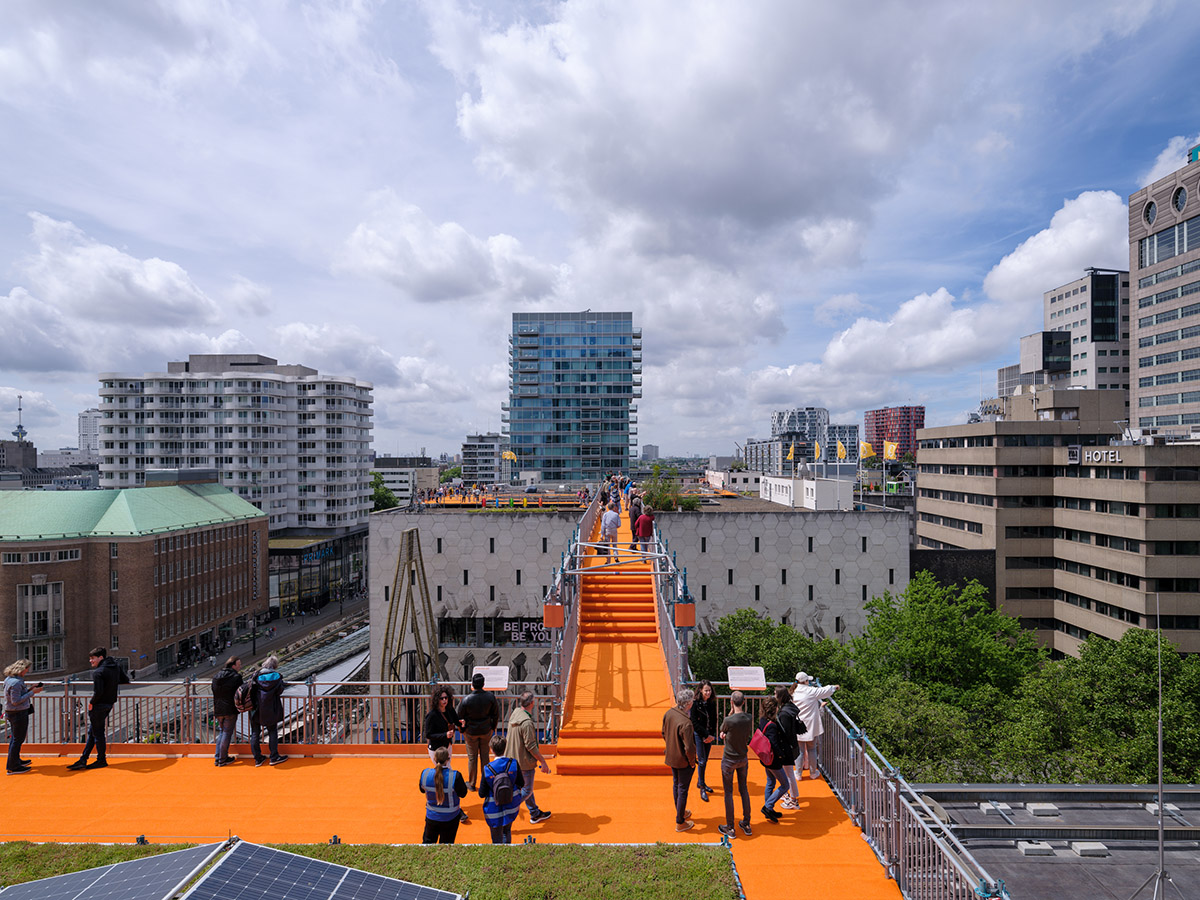 During this time, Rotterdam residents and tourists will be able to walk over the Rotterdam rooftops, given access to roofs that are normally closed and views that are usually inaccessible, and have a new perspective on the city.

The design, spanning the Coolsingel - one of Rotterdam’s most important streets, will also feature extensive programming, aiming to increase visitors’ awareness of the potential of roofs. The design can become a “second layer” that makes the city more liveable, biodiverse, sustainable, and healthy.

The bridge is clad in bright orange color and a 600-metre-long structure offering the public a fantastic view of the city for a month. 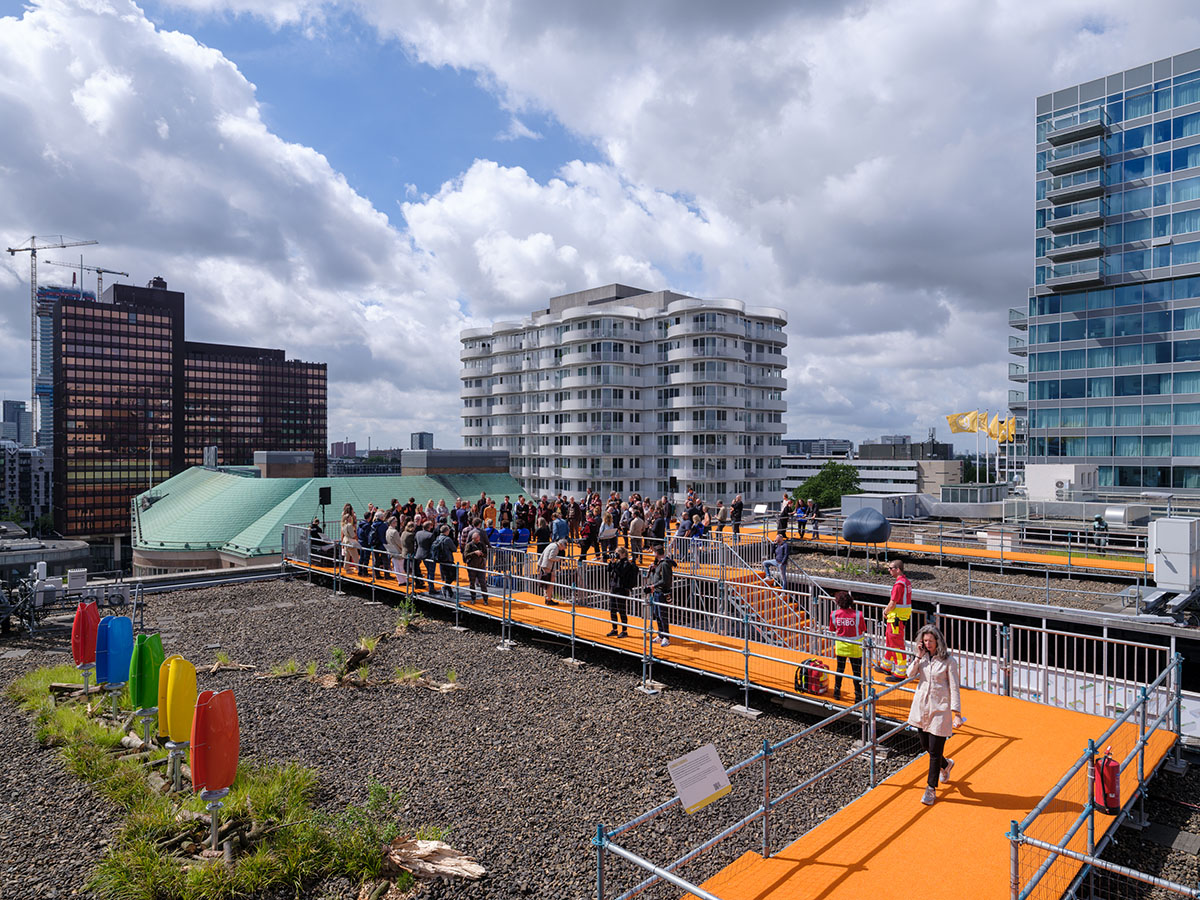 In the rooftop exhibition artists, designers, and architects show how much is possible if we use our roofs efficiently for greenery, water storage, food production, and energy generation.

On top of the installation, built by Dutch Steigers, all kinds of makers show how roofs can contribute to a sustainable, healthy and liveable city – from a virtual village to a green design for the roof of the Bijenkorf department store. 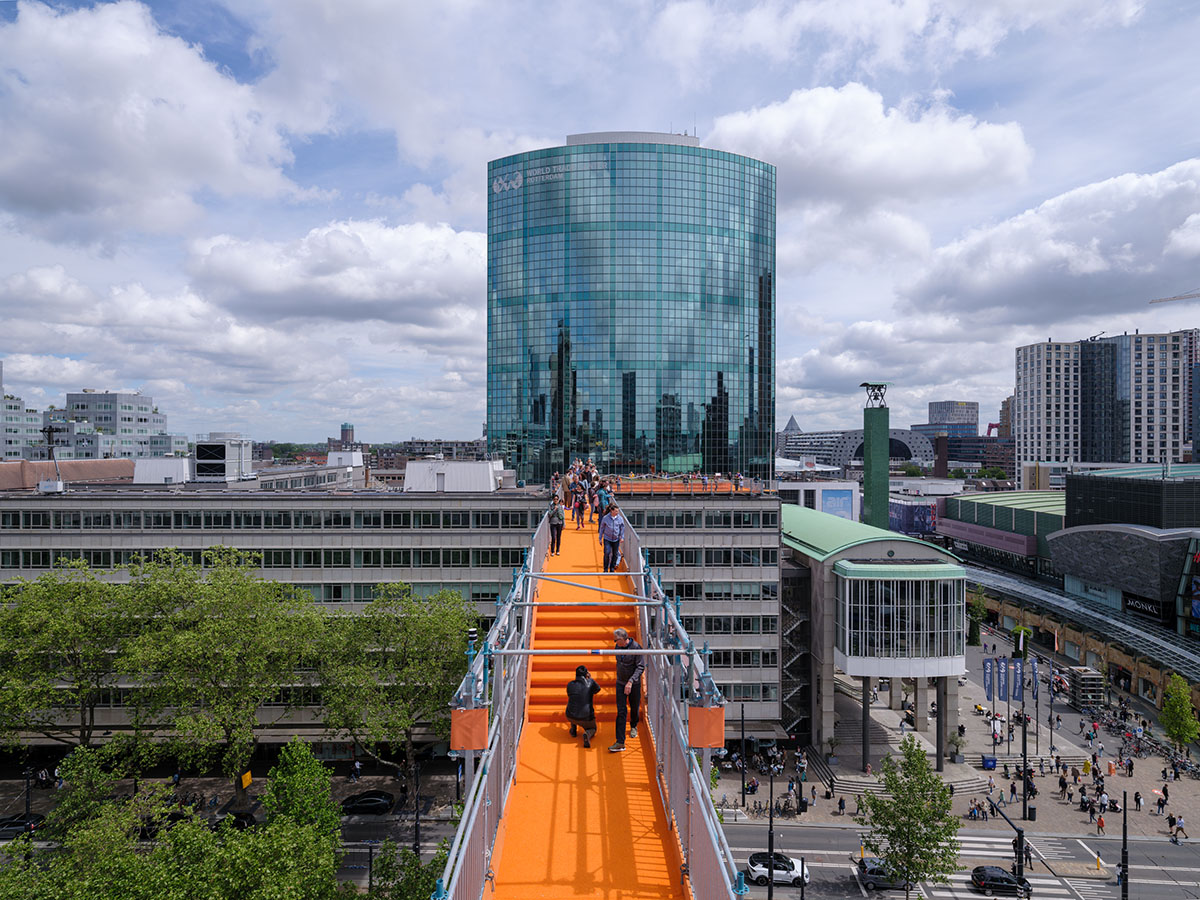 The temporary installation is an initiative of Rotterdam Rooftop Days, with the concept and design developed together with MVRDV.

As an office, MVRDV has actively worked on solutions for the scarcity of space in the city for years, and hopes to prevent the continued urbanisation of rural areas. In 2016, MVRDV designed The Stairs in Rotterdam celebrating 75 years of the reconstruction of Rotterdam.

According to MVRDV, rooftop programming can also help to deal with some major issues such as climate change, the housing crisis, and the transition to renewable energy. 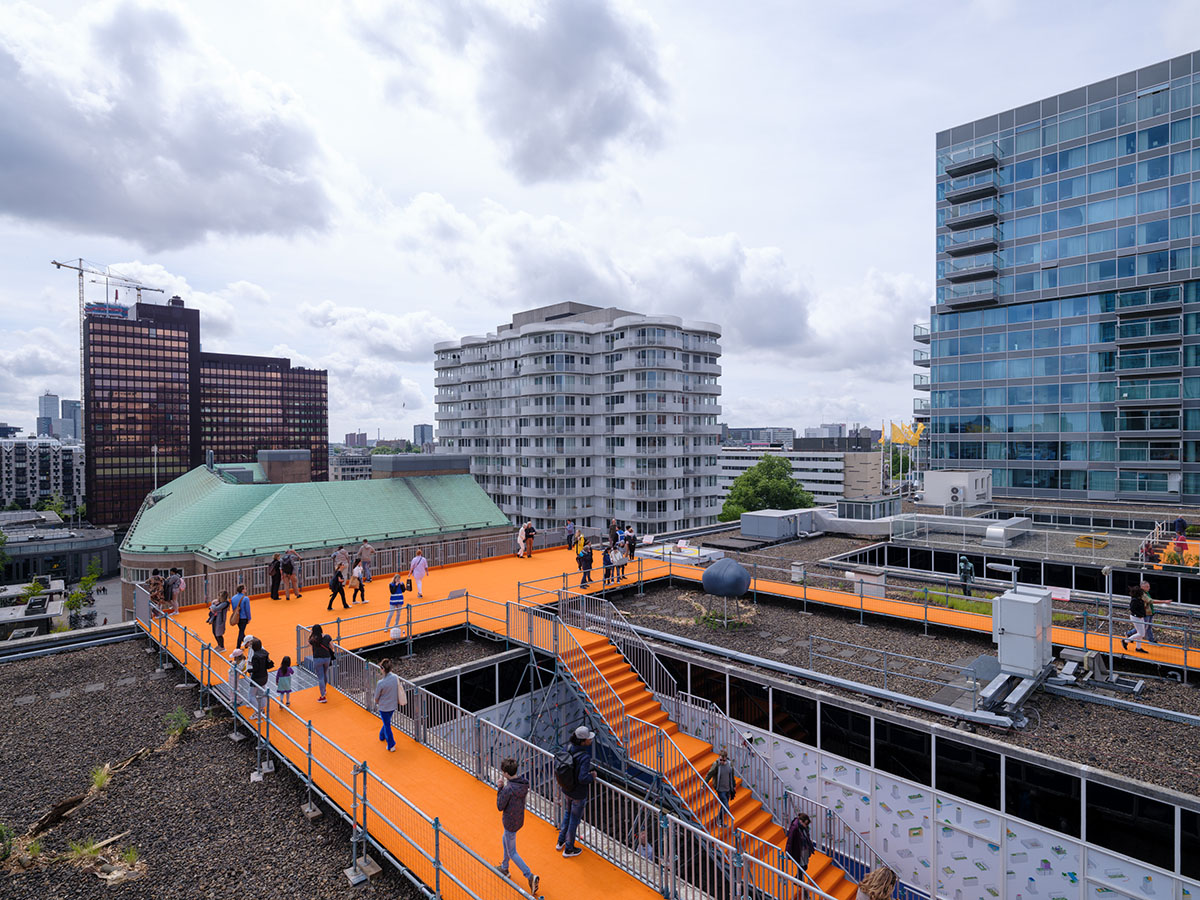 With this project, the team believes that the Rooftop Walk will draw attention to these problems – making visitors more aware of the possibilities, especially in a city like Rotterdam where 18.5 km2 of flat roofs remains unused.

"In 2006, for the celebration of 75 years of Rotterdam’s reconstruction, we designed the Stairs to Kriterion, which attracted almost 370,000 visitors. That’s when the idea arose that it would be good to make a sequel to the project," said MVRDV founding partner Winy Maas. 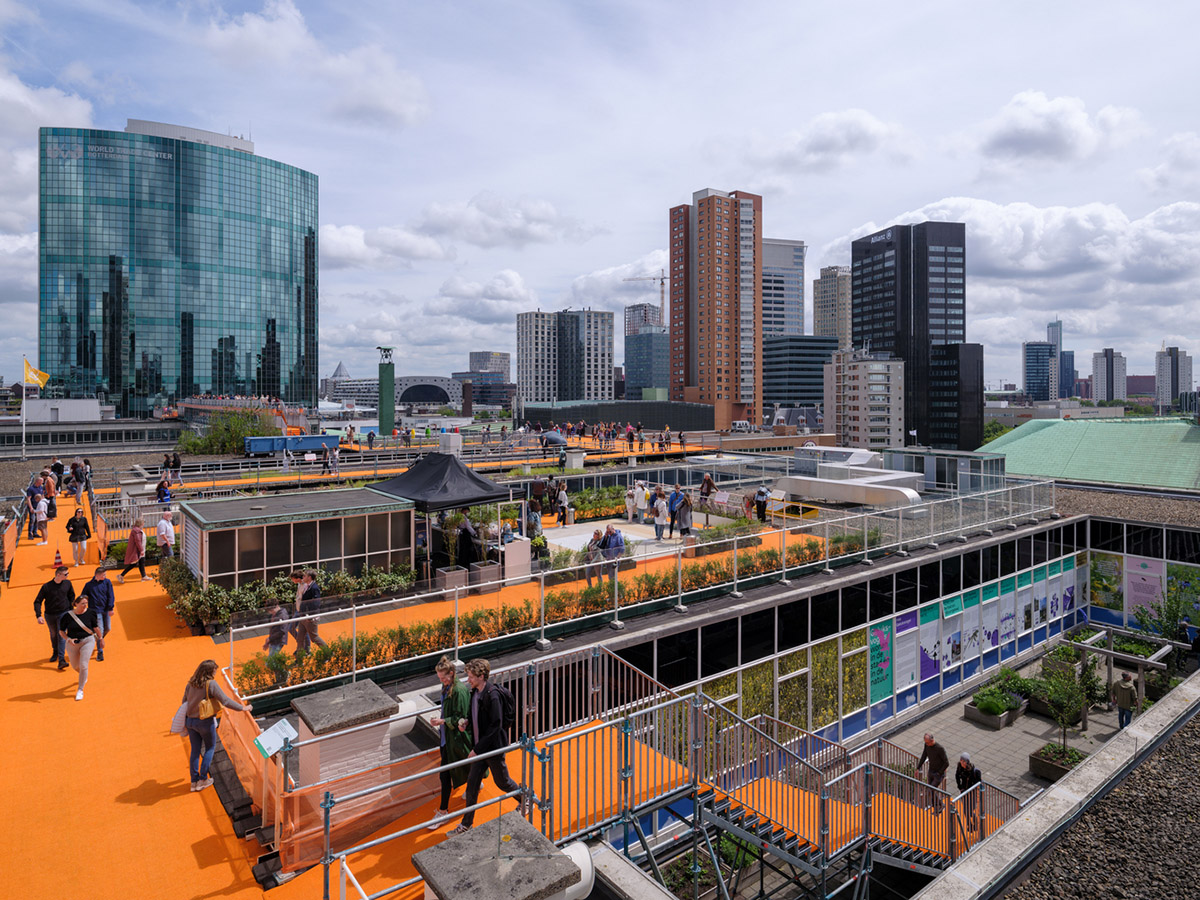 "During the Eurovision Song Contest, the idea was to make a high stage to honour the winner, but that was cancelled due to the pandemic," said Maas.

"I am glad that Rotterdam Rooftop Days have managed to achieve this, and I want to argue for a further sequel: we should not only occupy our roofs and make them greener but also connect them so that we can offer Rotterdammers a new rooftop park! For this, the orange carpet and the bridging of the Coolsingel are a nice initial test case," Maas added. 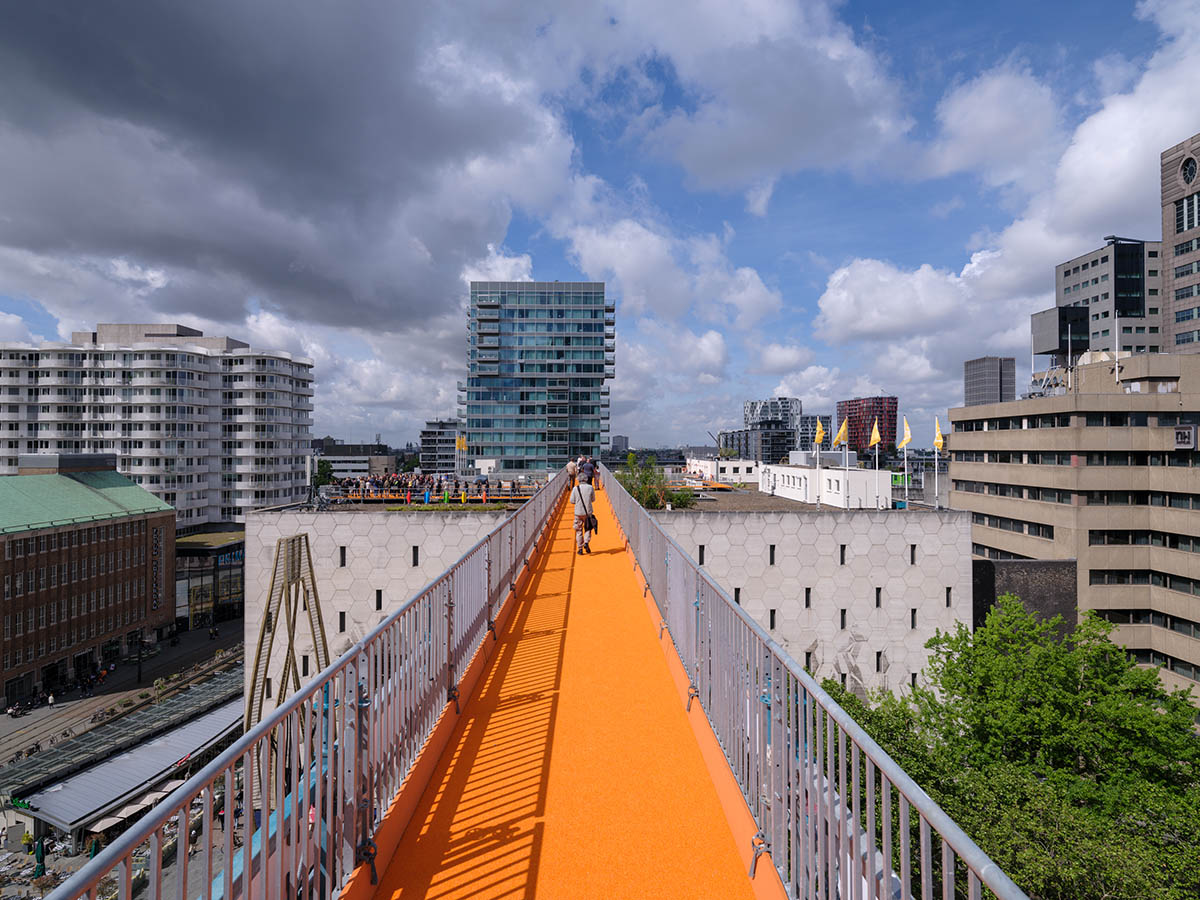 Since designing for roofs is becoming a tradition in MVRDV's design philosophy: in 2021, MVRDV and Rotterdam Rooftop Days, together with the Municipality of Rotterdam, presented the Rooftop Catalogue, a handbook presenting 130 innovative proposals for better use of existing flat roofs.

"This book has since inspired other municipal authorities to take concrete action," noted MVRDV. 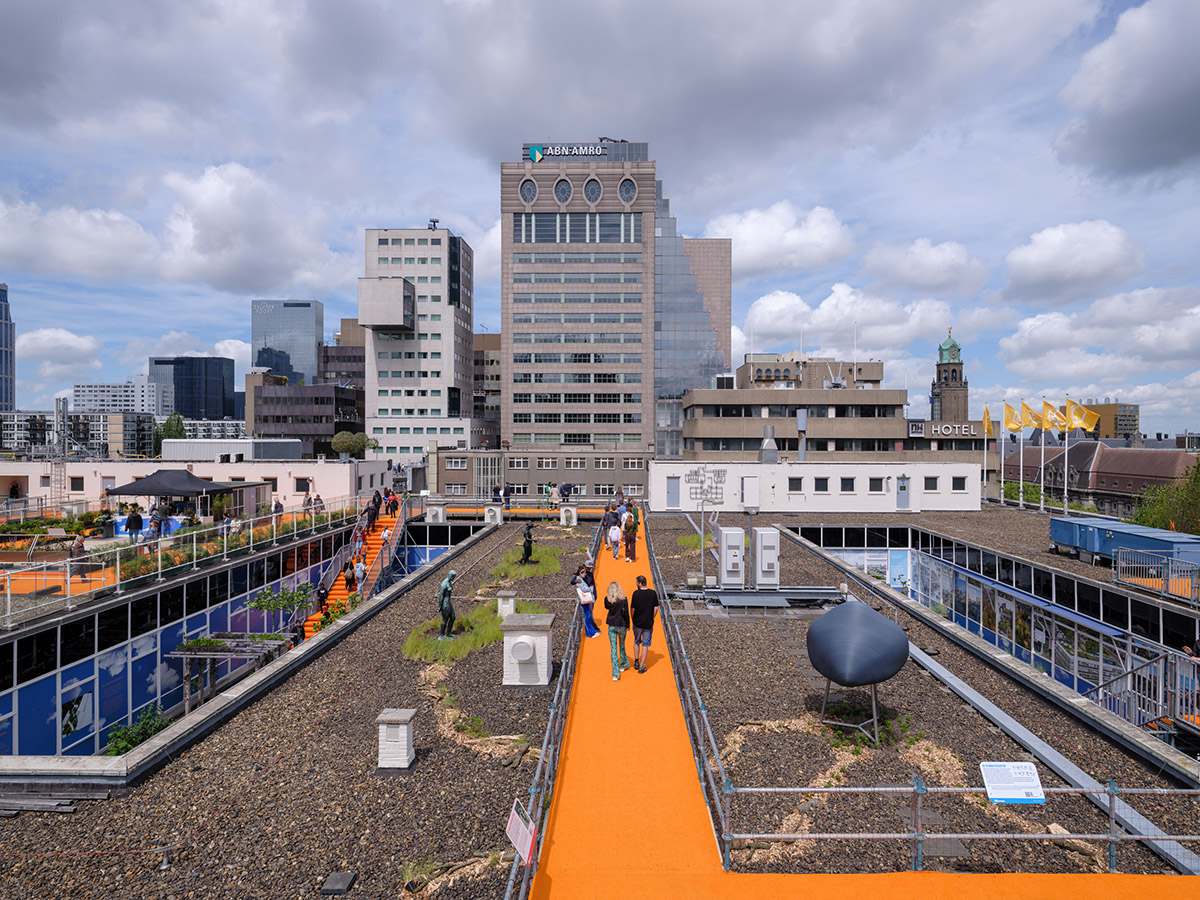 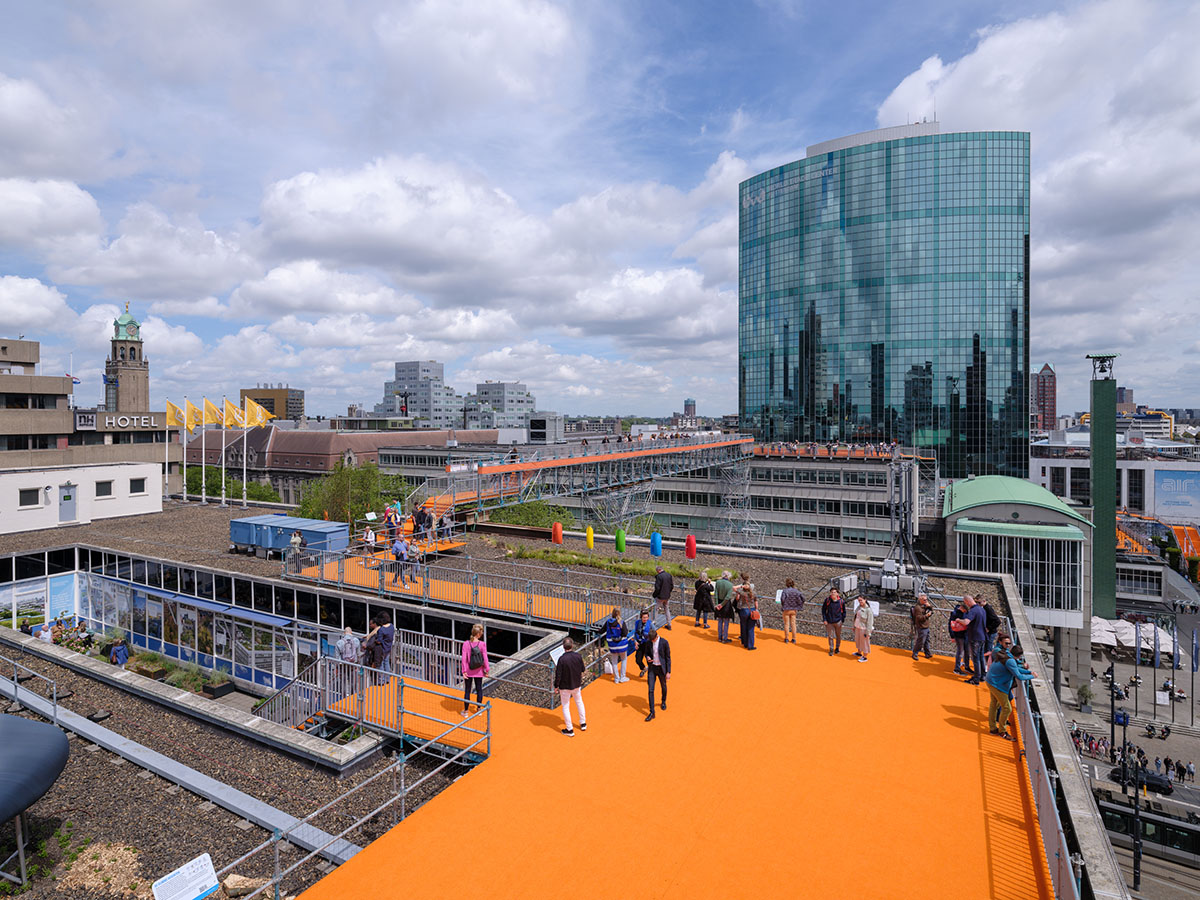 The Podium overlooks the MVRDV-designed Depot Boijmans Van Beuningen, and will form the heart of Rotterdam Architecture Month, which will organise various events at The Podium in June. 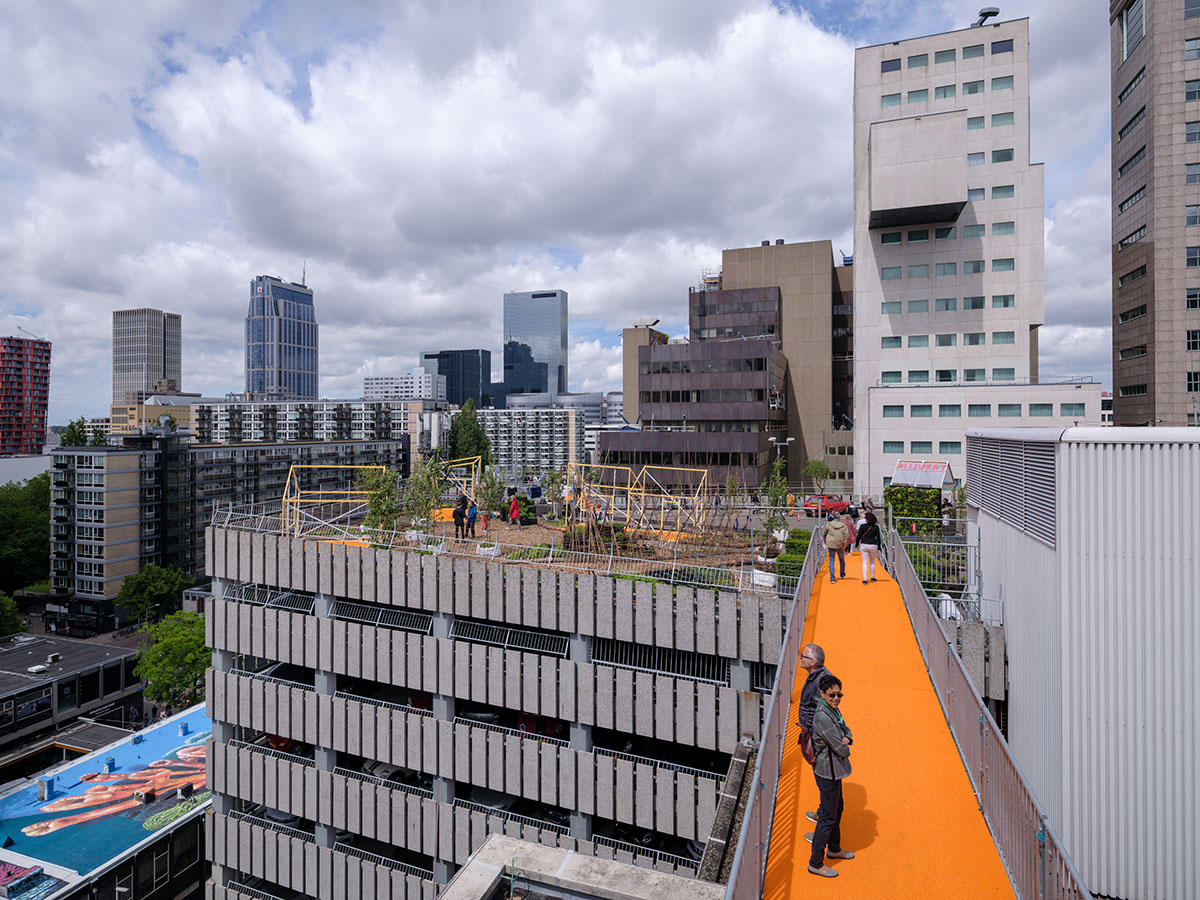 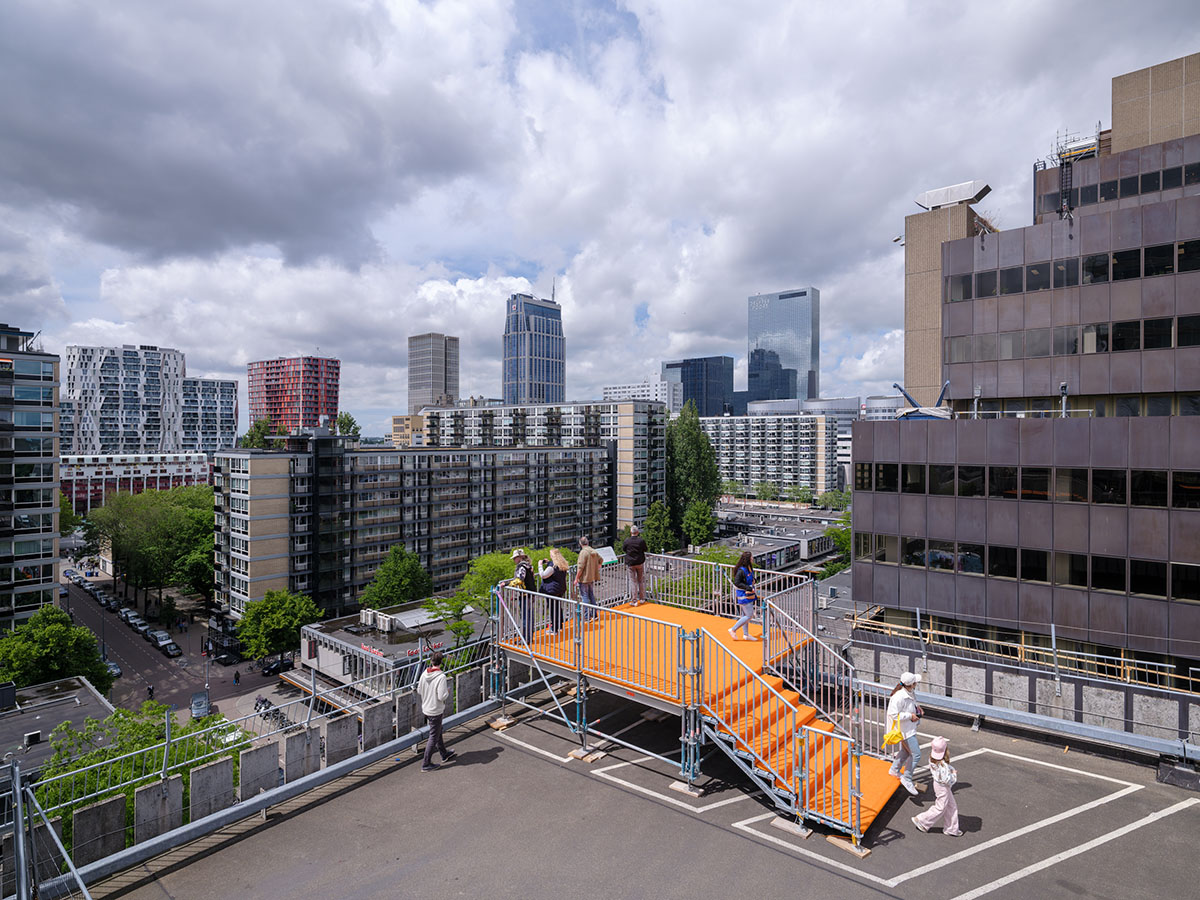 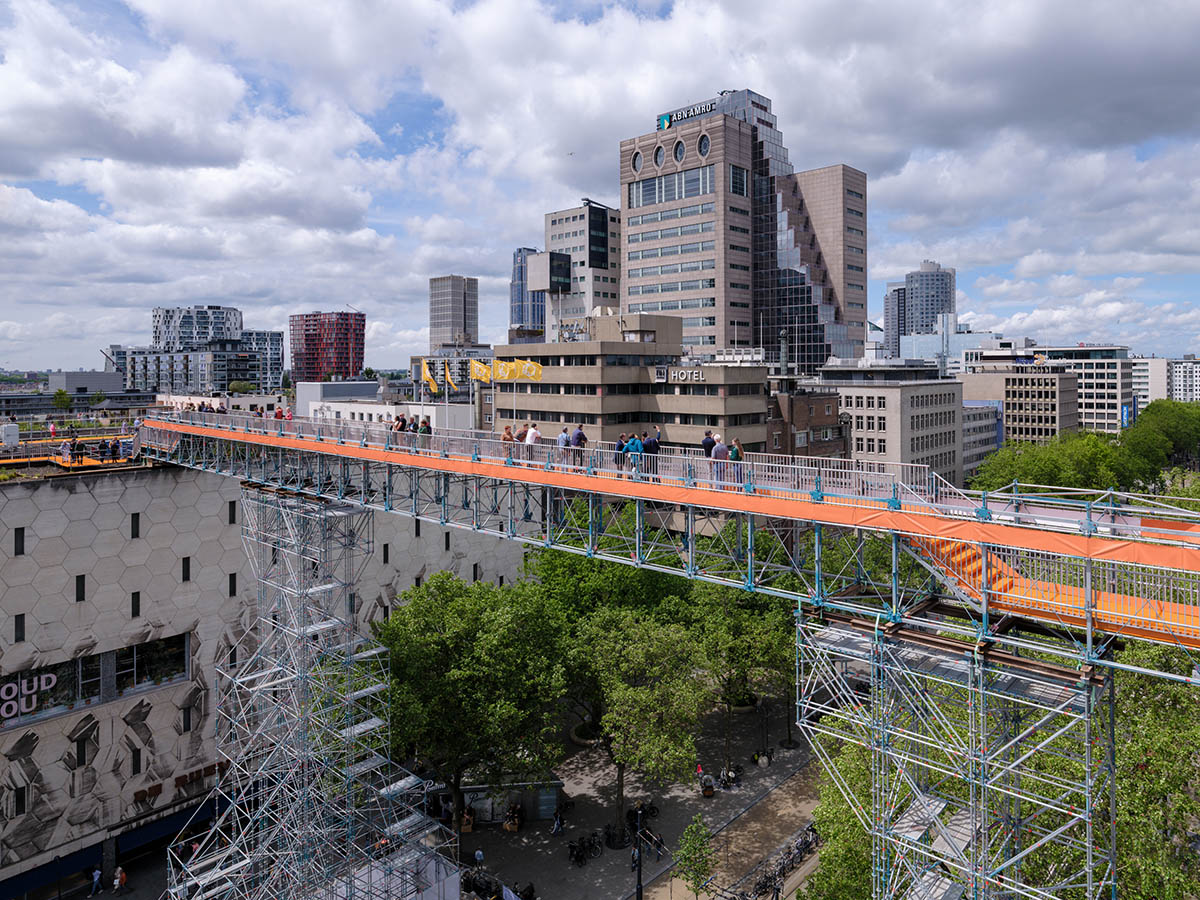 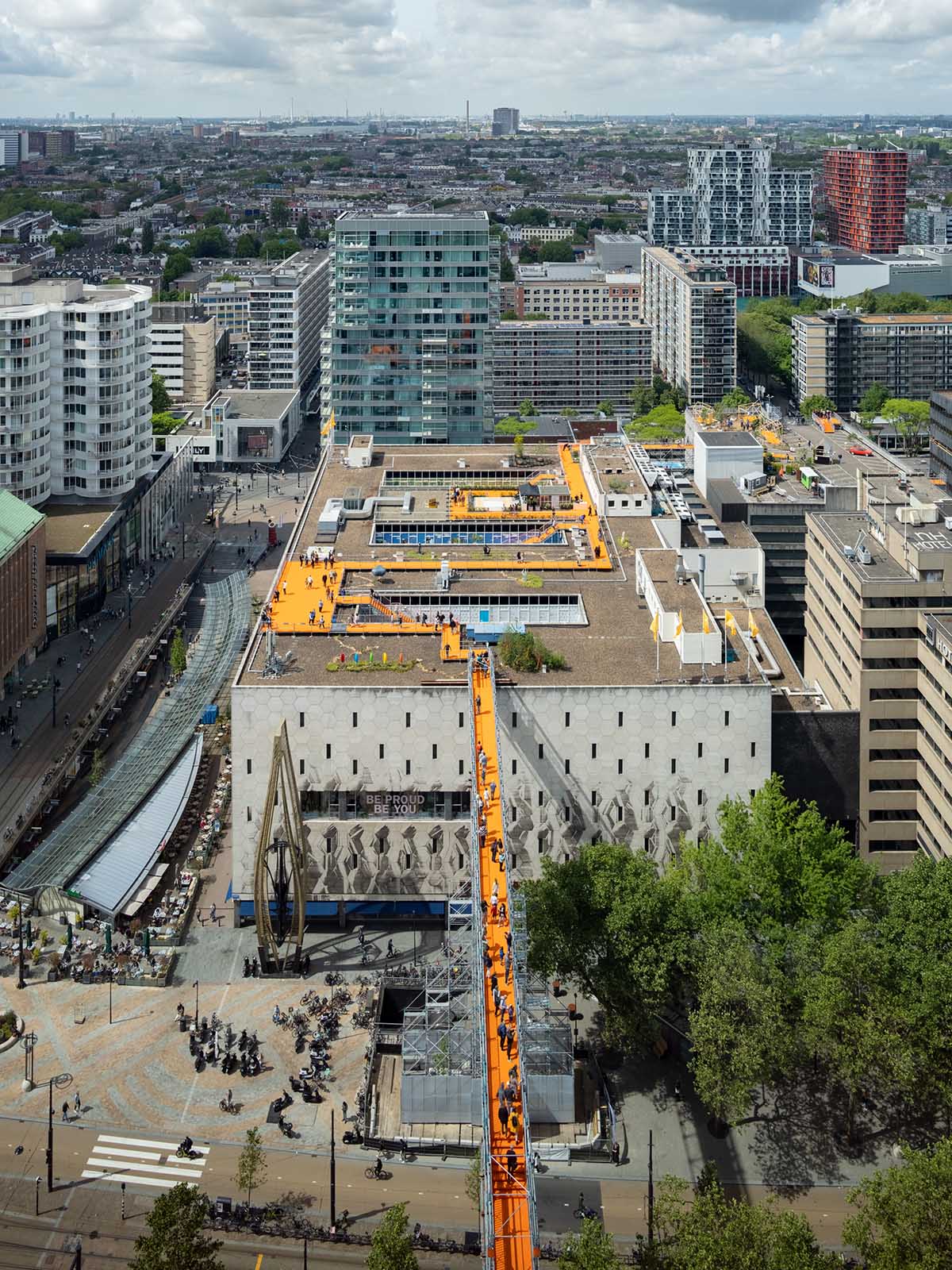 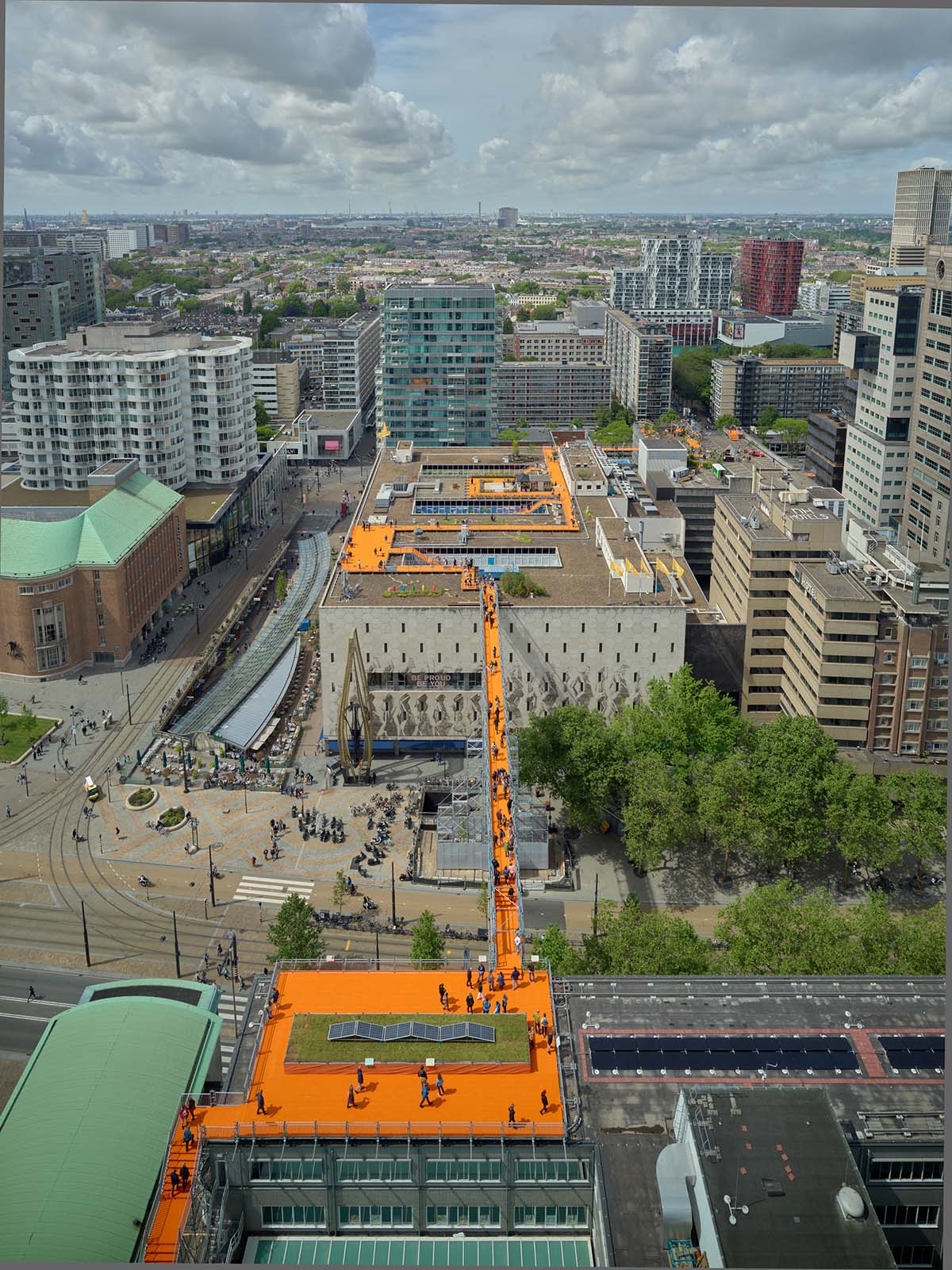 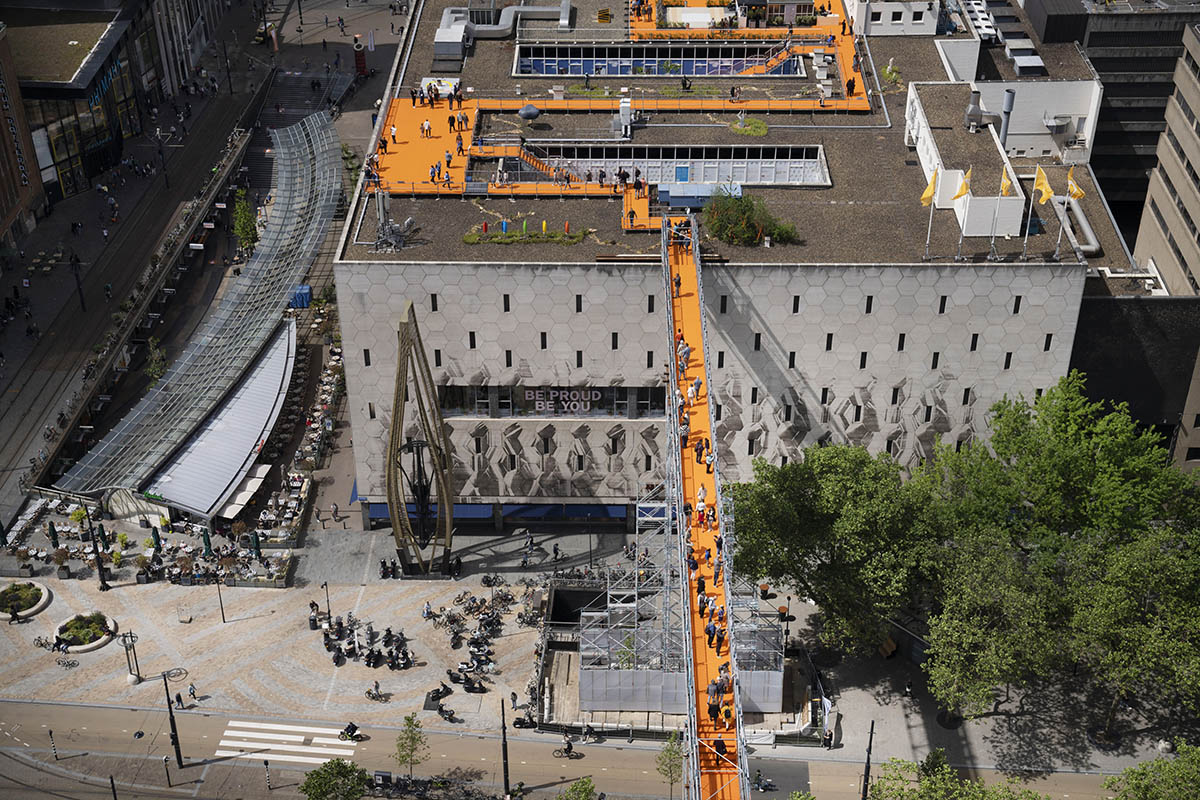 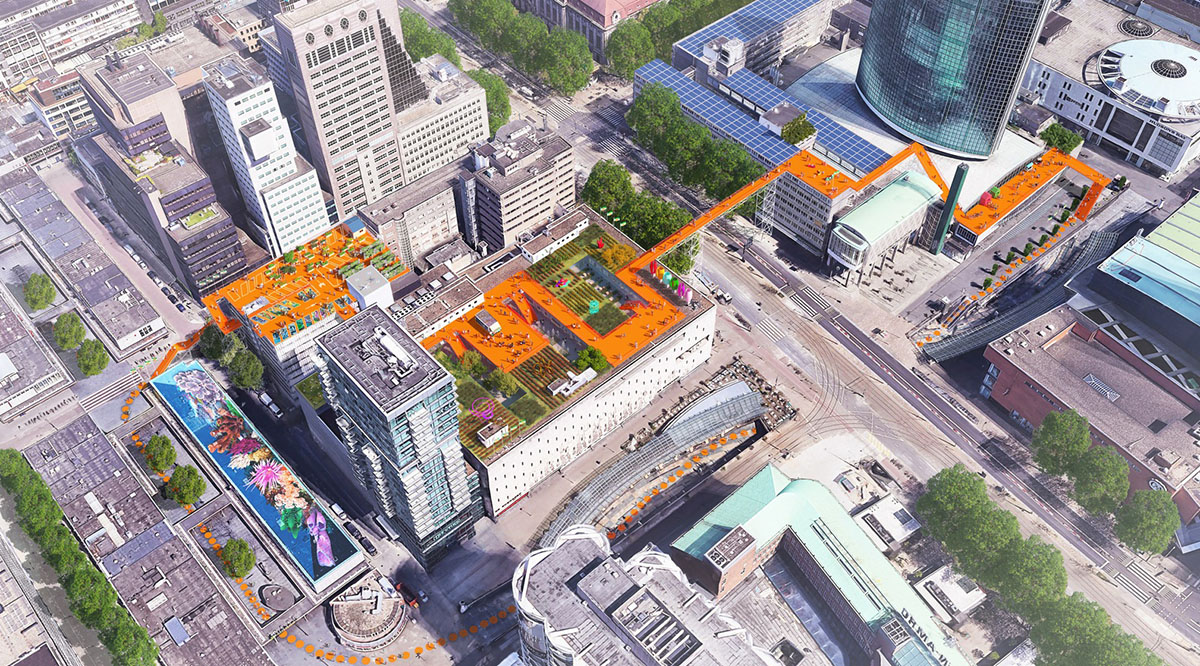 Tickets for Rotterdam Rooftop Walk can be booked via rotterdamsedakendagen.nl or rooftopwalk.nl.