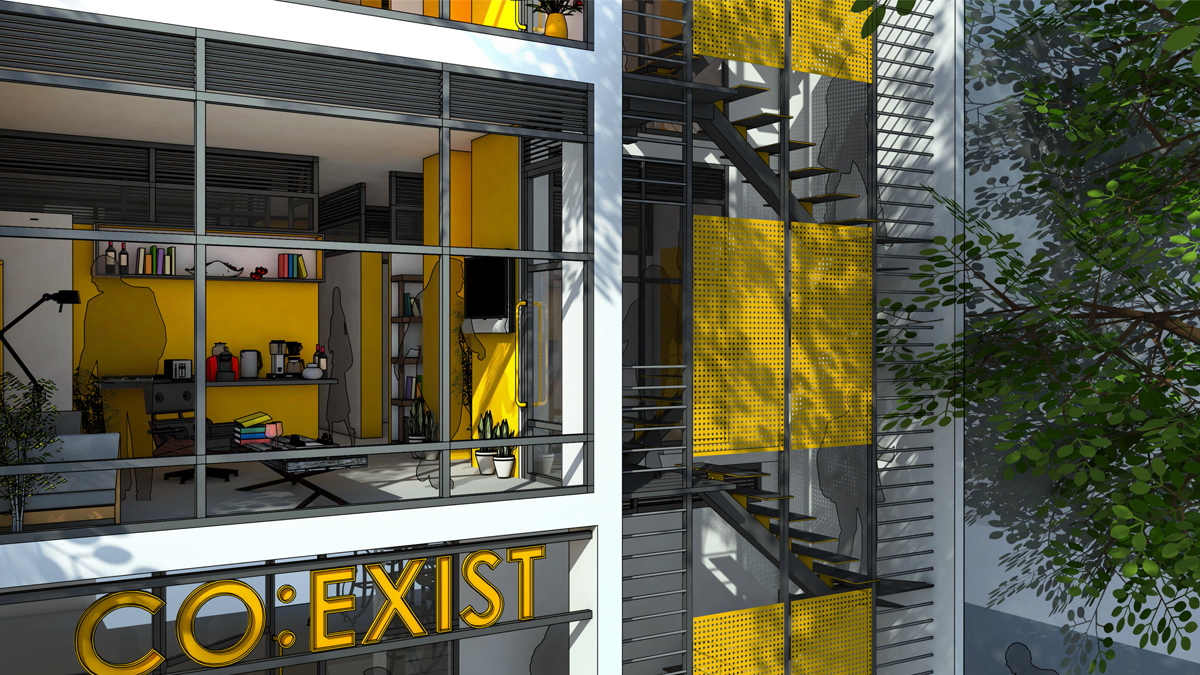 One of the most indelible phases in an individual’s life can definitely be regarded as the tenure we spend during college or university studies. A major frame of this time, that is etched distinctly in our memory segment, definitely belongs to the frolic most students are a part of at the community hostel or any co-living arrangement.

Each space of this temporary residence is so finely intertwined with a plethora of memories, from the midnight hot beverage session in the common canteen to the sheer joy of sharing your most personal thoughts while seated on the same bed; an evade from such a timeless piece of architecture almost seems impossible. Imbibing this nostalgia into a full-fledged design scheme, the recently completed project by Studio Dot presents its users with a co-living layout that is utilitarian as well as psychologically lasting.

Entitled as "Co-Exist", this hostel temporary lodging is located near the North Campus in Delhi University in India. Being in close proximity to an educational institution, it acts as a major vantage in terms of accessibility, for both students and young graduates. Owing to the typology of the built environment desired by the client, architects at Studio Dot sought to create a design encompassing the essence of collaboration and interaction. Intricate features including a common dining and terrace garden, aid to amplify this subtle yet relevant concept of implementation. 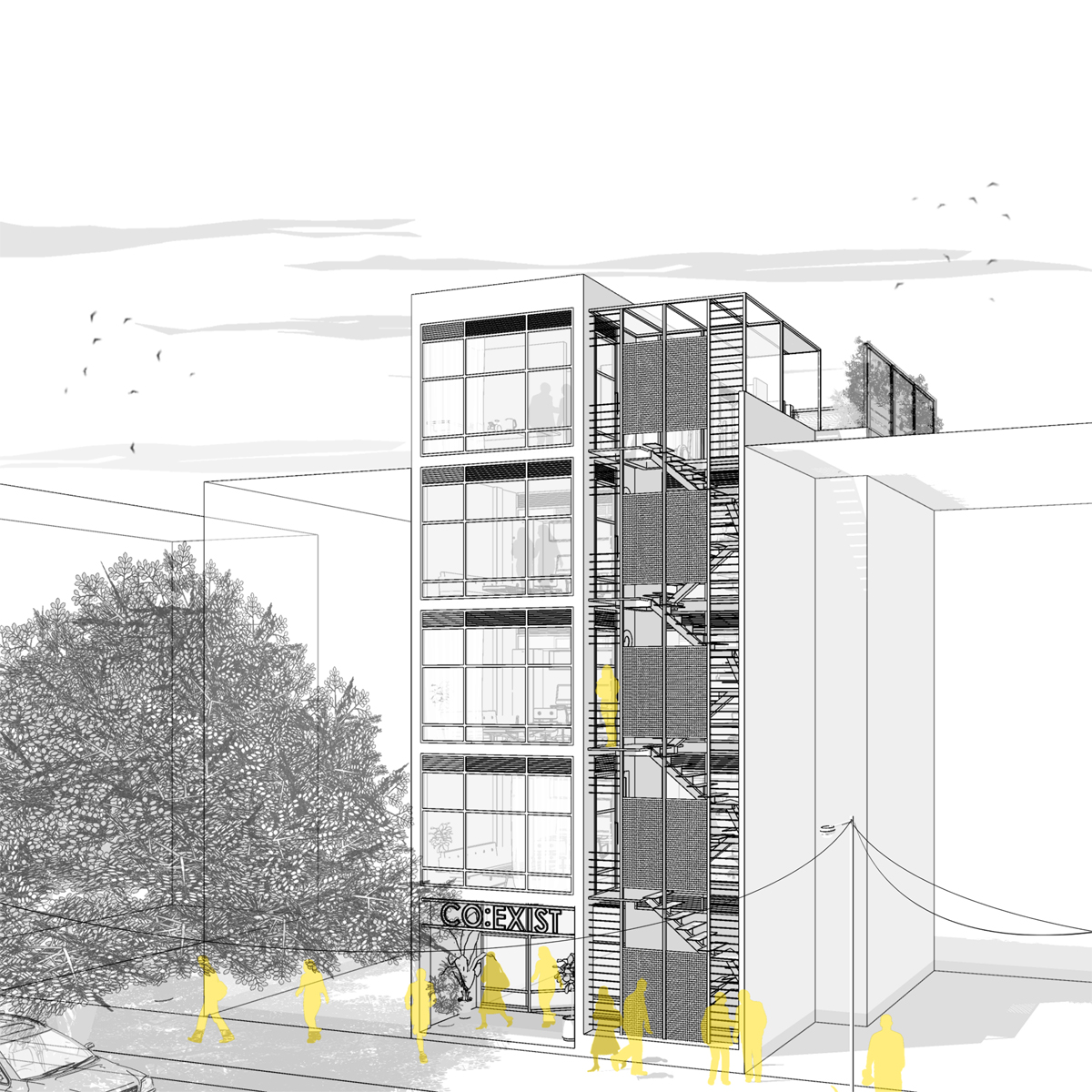 The vertical and linear planning of this structure is aimed at providing a suitable living paradigm for working  individuals and university students. Image © Studio Dot

Abutted by the main road near the front facade, the planning by Studio Dot had to be conceived with livable spaces near the rear end to diminish traffic noise and instill privacy in the habitable modules. Additionally, the structure was also required to be retrofitted on an existing 45-year-old dilapidated skeleton, thus dialing the challenge up a notch for the design team.

The Principal Partner, Anmol Arora stated, "schematizing this project, while maintaining the primary core, was definitely a determining factor. However, we aimed to re-utilize as much as possible, keeping the safety of the workers and the users at the ultimate priority."

Spread across three floors, with the main interactive spaces on the ground and terrace level respectively, Co-Exist successfully poses a fresh perspective of well-designed student accommodation in this area of the capital city.

The inception of the design occurs with a contemporary facade. Due to the presence of built masses on all three sides of Co-Exist, the facade was created as the major source to administer natural lighting into the entire scheme. Composed with full glazed openings, the rise of the staircase also forms a part of the front elevation of this structure. Partially integrated with perforated metal sheets in canary yellow, the exterior frame presents the accessing user with a hint of the subtle vibrancy possessed by the interiors as well. 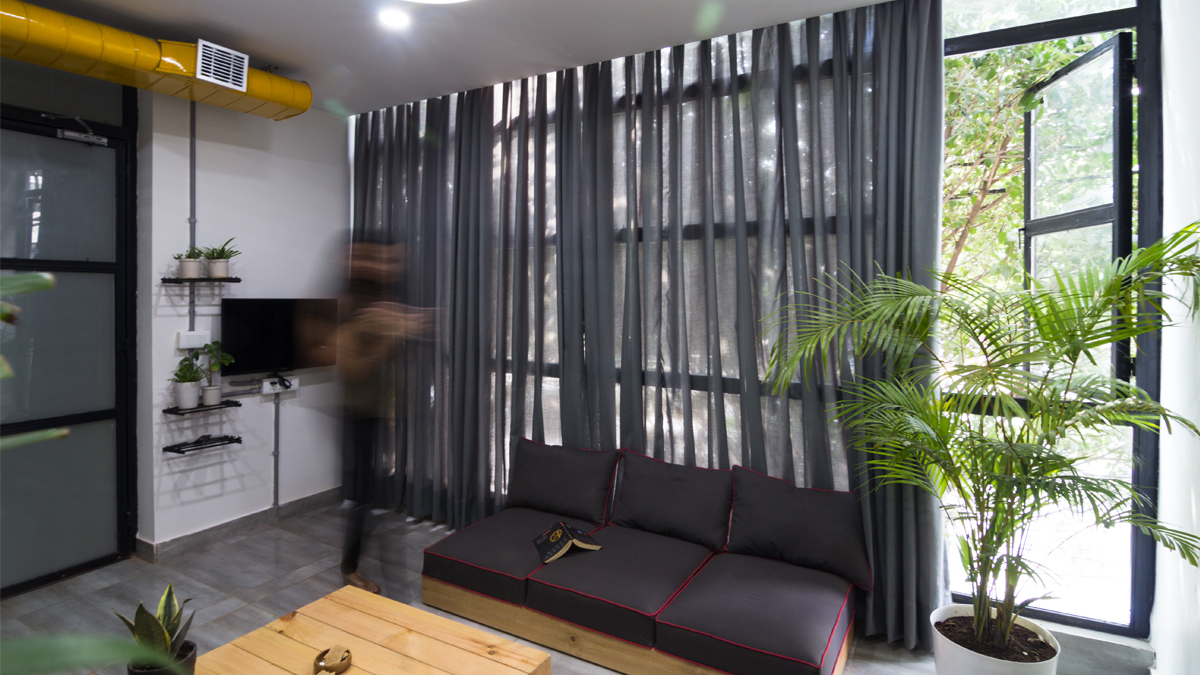 A common interactive space for the occupants.

The main entrance gives way to a spacious foyer, backed by a common cafe on the ground floor. Designed in harmonious shades with a capacity of 15 diners, the adjoining kitchen area aids the staff to serve orders at a steady pace. Additional service areas permit the effective functioning of this co-living residence. Approachable by a main commuting stairway, the three upper floors present identical layouts, dedicated as abode modules for users. Each floor consists of varied room options; including single, double, and triple accommodation: extending to a total capacity of housing 40 students. In order to avoid wastage of space and exploitation of resources, a unique furnishing design has been opted by the design team.

"We purposely went with an innovative style of bunk beds, with the lower portion designed as a study area. Supplementary racks to act as storage, have also been incorporated near the beds," explained Shubhit Khurana - Principal Partner of Studio Dot.

He further added, "The triumph of any design revolves around the satisfaction of the inhabitants. The designing language that we chose for Co-Exist not only enabled a more concise system of living but also aimed to provide an effortless stay for the guest." 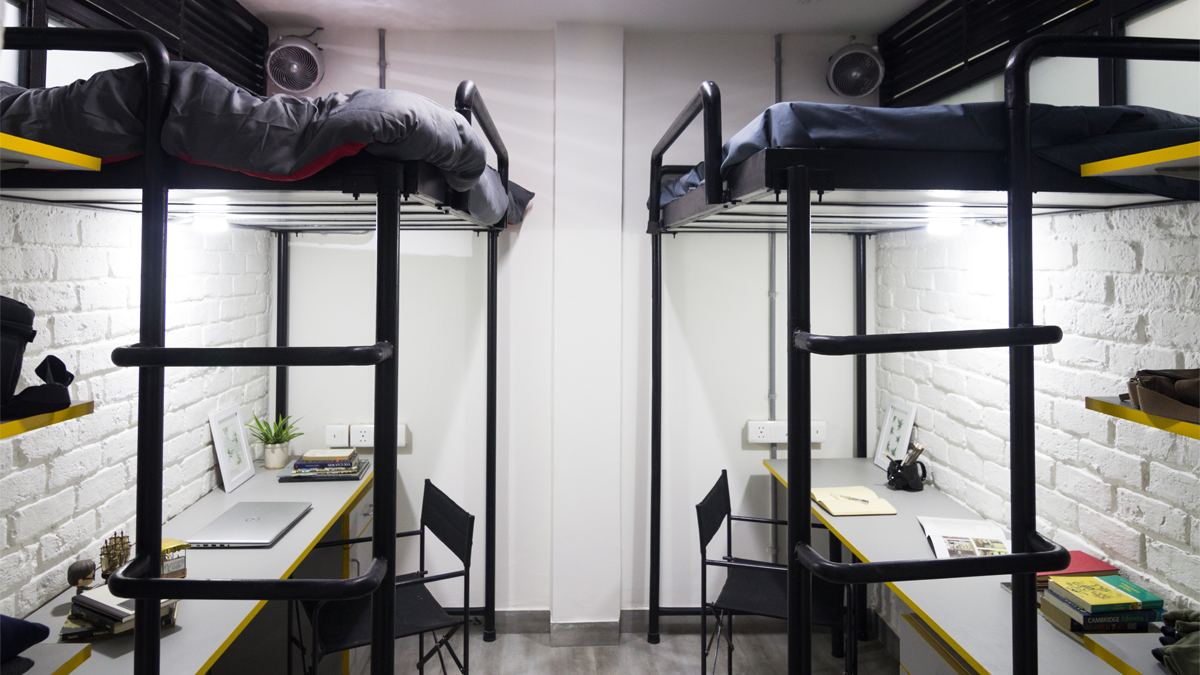 A blend of exposed brickwork painted in white, with linear yellow tints in the storage: amalgamate to present a warm and familiar ambiance. The integration of an open ceiling, with the major pipes painted in a pop yellow color, showcases a cost-effective idea while creating the illusion of an amplified volume.

Upholstered curtains in clouded grey tones have been used to divide the accommodative units, thus allowing the guest to choose his privacy level and maintain a flexible approach. The culminating floor houses a lavish studio apartment, along with a lush terrace garden designed to sprinkle a final instance of communal interaction among the users. 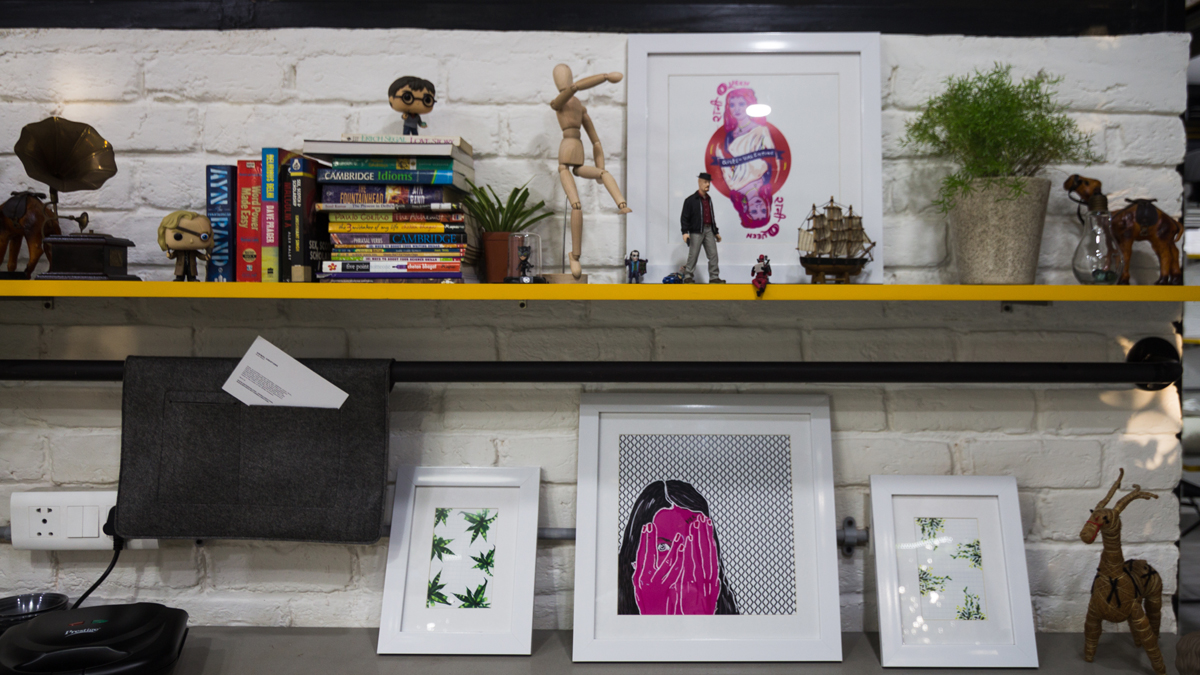 Simplified storage units designed with a zest of yellow

Timeless and functional architecture can be curated, irrespective of the scale, and typology of the project. The design of Co-Exist by Studio Dot is a true testimony of this ideology. Converging varied aspects of design in one weave while catering to the technical paradigm is the basic philosophy that this team functions by and showcases proudly in this co-living endeavor as well.

> via inputs from Studio Dot