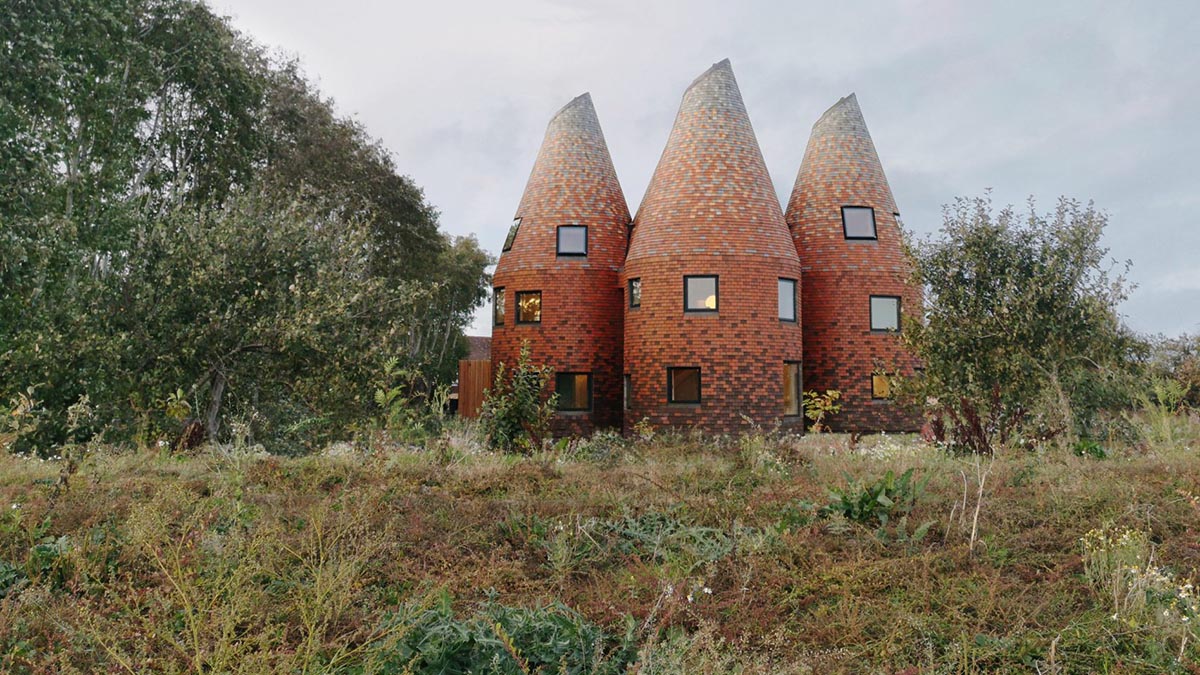 The five-tower residence is made up of Kent style tiles in six shades, slowly fading from dark red at the base to light orange at the tip. 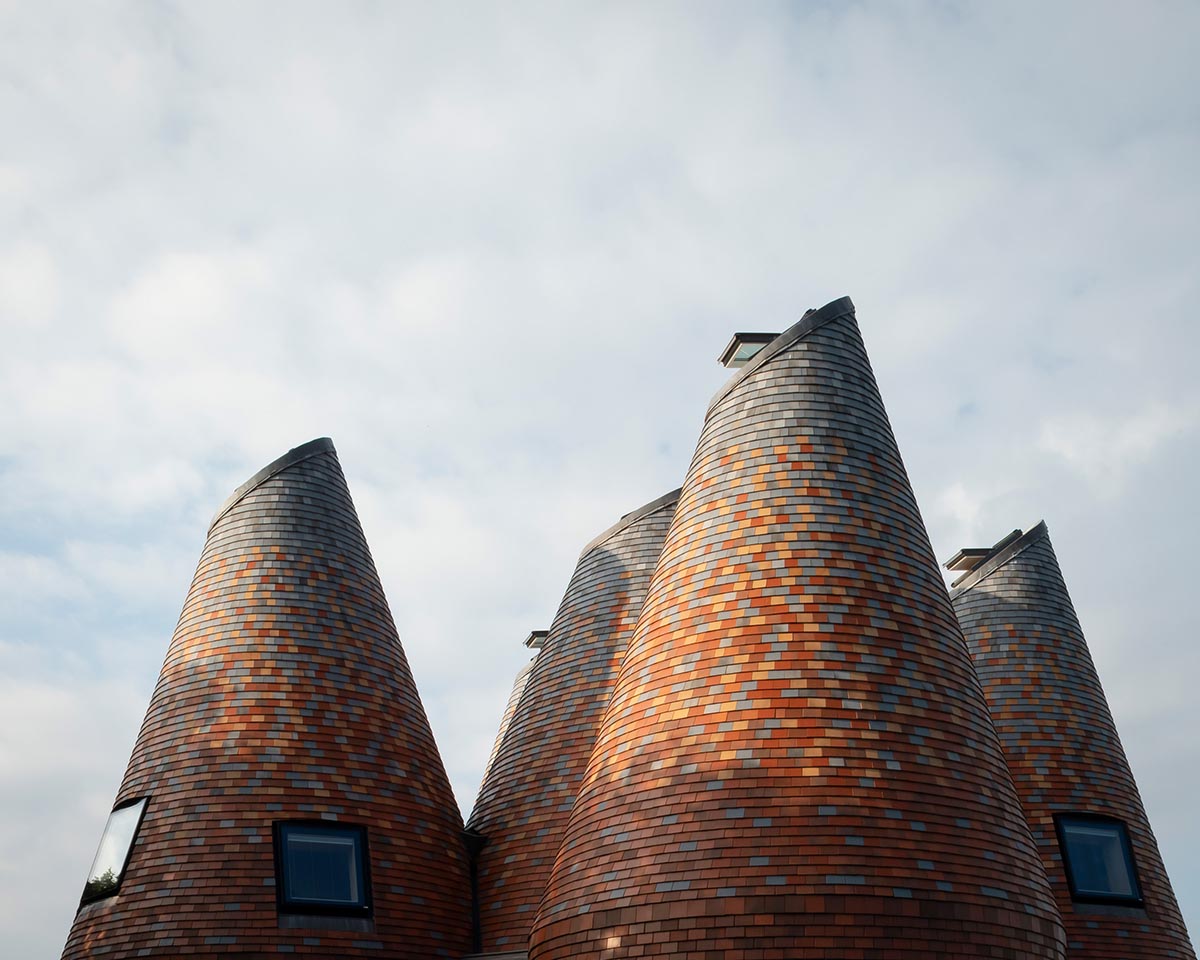 "Bumpers Oast represents a 21st century riff on a local vernacular derived from the houses used to dry hops as part of the beer-brewing process," said ACME.

"The property has been created for a family that moved to Kent 10 years ago and almost bought an oast house at that time they enjoyed the intimacy and idiosyncrasies of living in circular spaces and so were happy to receive a proposal from ACME for a modern interpretation." 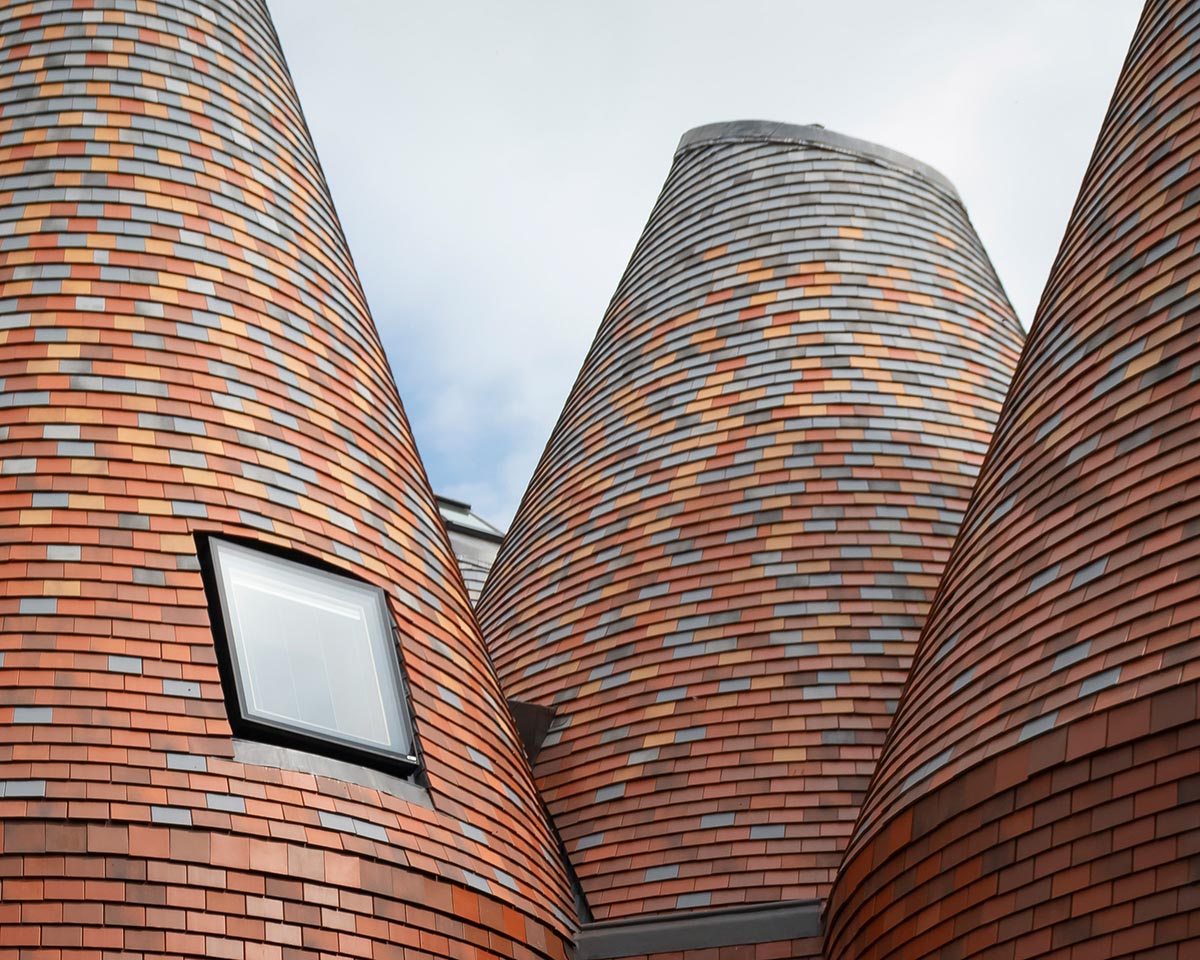 Covering a total of 300-square-metre, the plan layout of the house is simple; four towers, including different programmes in each, are interlocked to a central hall which is also shaped in a tower-form.

Each of the towers houses private functions such as bathrooms, bedrooms and service spaces, and framed window openings allow for selective views out. 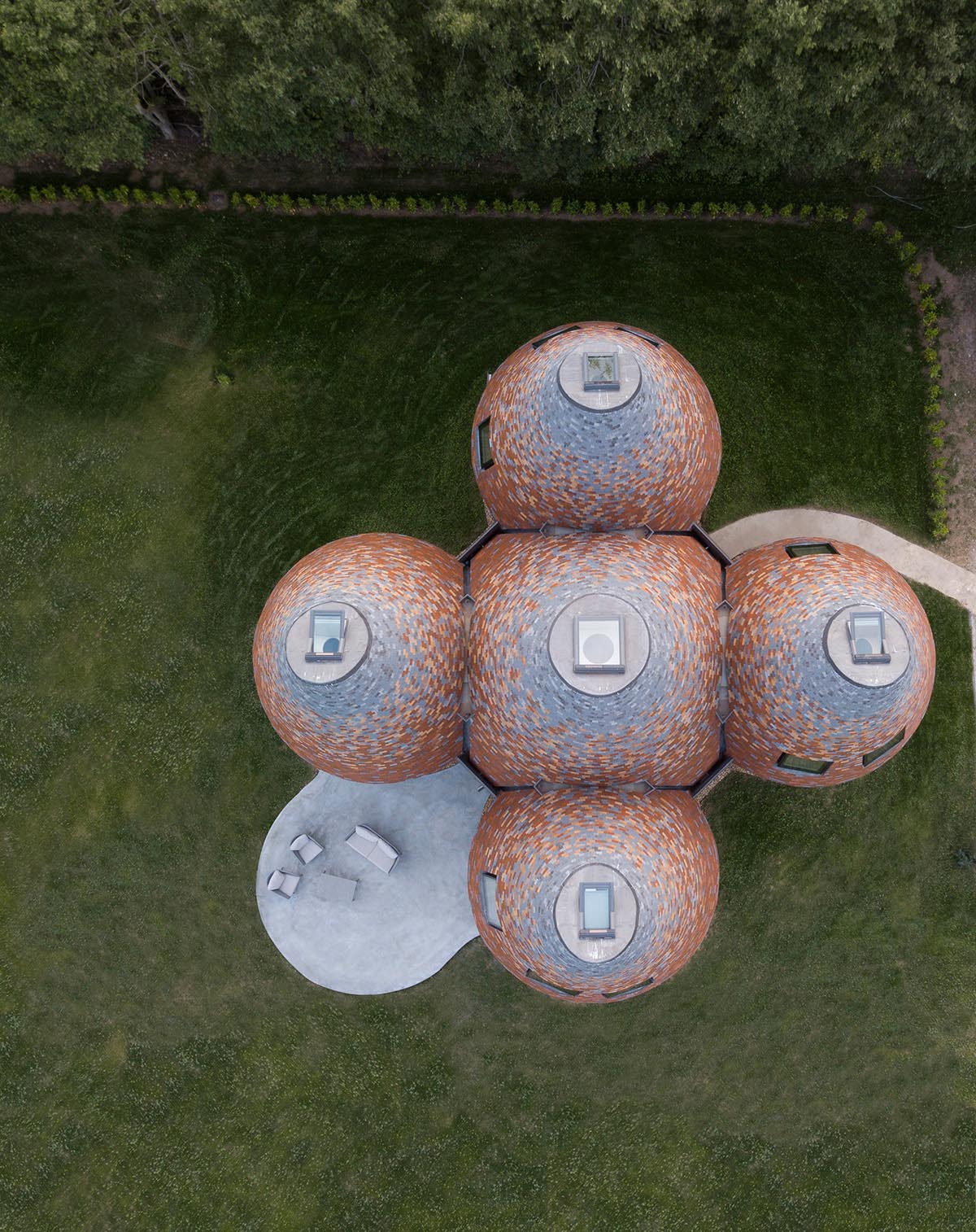 The centre of the house, there is a triple-height living space, visually open to the garden and towards each of the four towers, forming the heart of the house.

The proportions of the tower roundels were based on a traditional oast and they stand slightly apart from one another; creating views inwards and outwards. 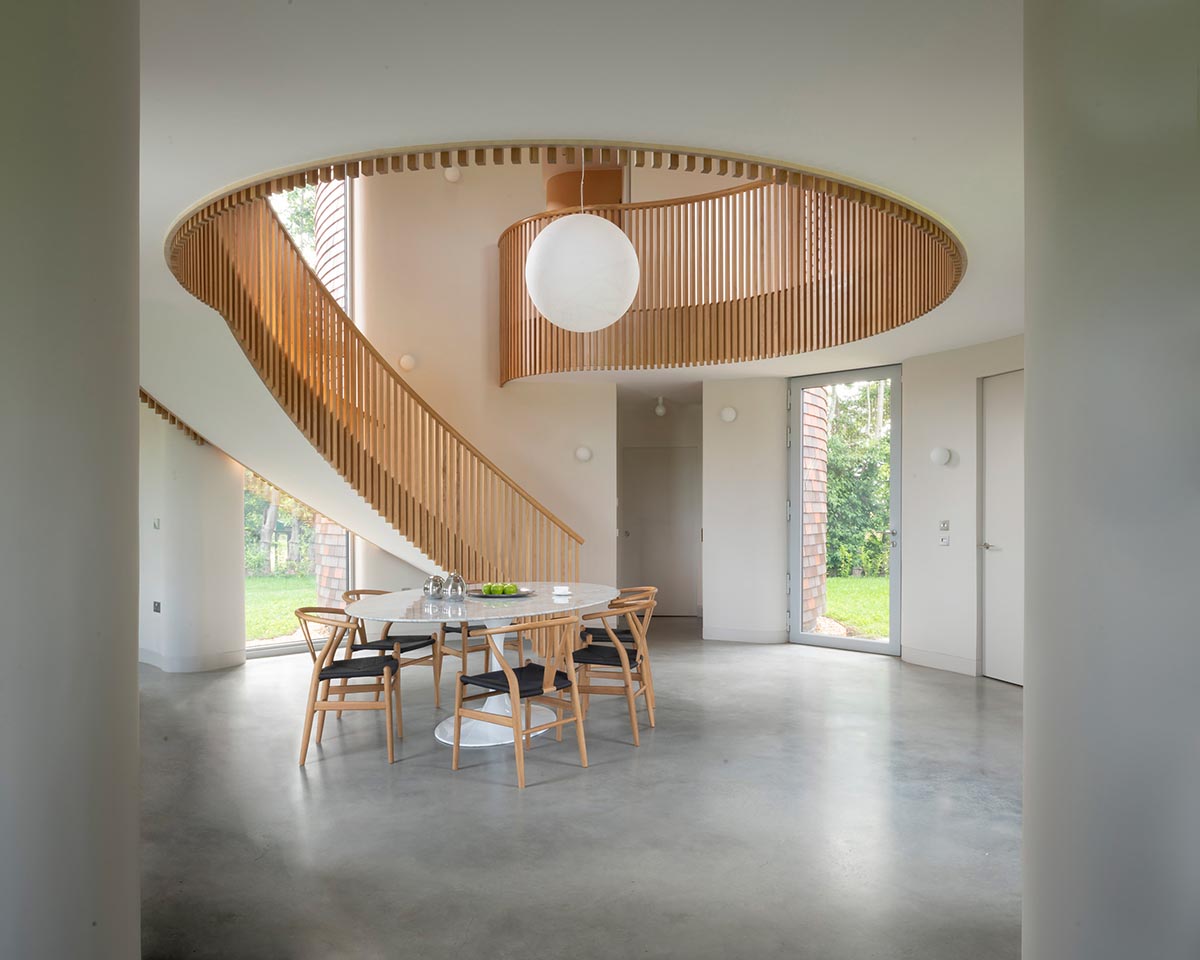 "The towers are all connected to a triple-height central space that opens out to an orchard setting and forms the heart of the house," added the studio.

"This was made possible by assembling the frame with thick timber modules, topped by cones manufactured offsite and then craned into position." The architects used Kent-style tiles to create the exterior skin in six shades, slowly fading from dark red at the base to light orange at the tip.

These were produced using local craft skills and the tiling work was a huge technical challenge. Every tile above eaves level has been individually cut, with over 41,000 used across the whole facade. The interior of the roundels is clad in plywood, as a continuous surface for the cylindrical parts, and as overlapping plywood shingles for the roof cones.

Curved furniture is built into the rooms where possible to make the best use of the space. The kitchen needed to feel warm among the harder surfaces downstairs, as the family see it as an important gathering space. 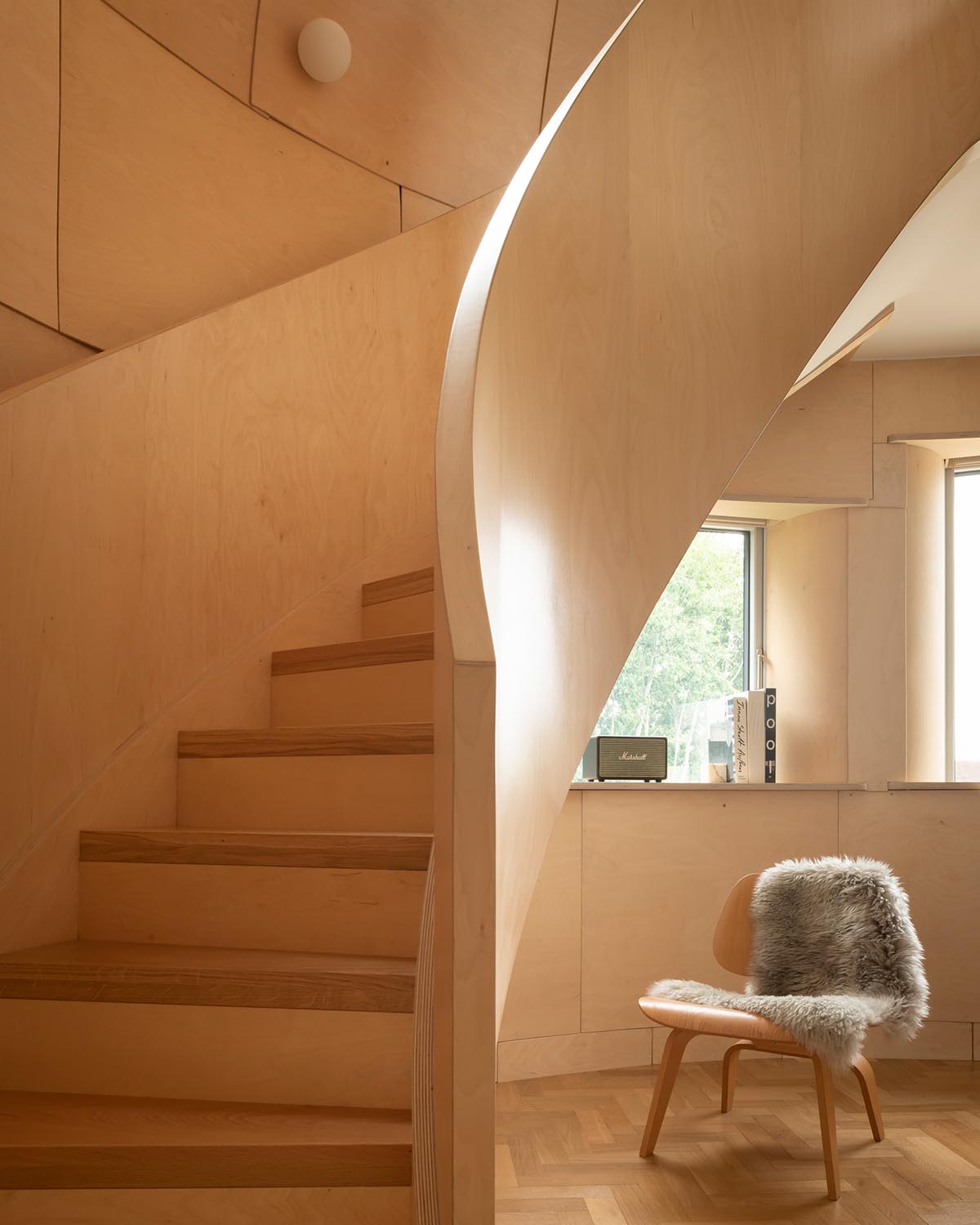 Timber was selected for this reason and it has been employed to create bespoke curved units and fronts to follow the line of the wall. A microcement was used to form the counter top to achieve a continuous surface that matches the polished concrete floor. 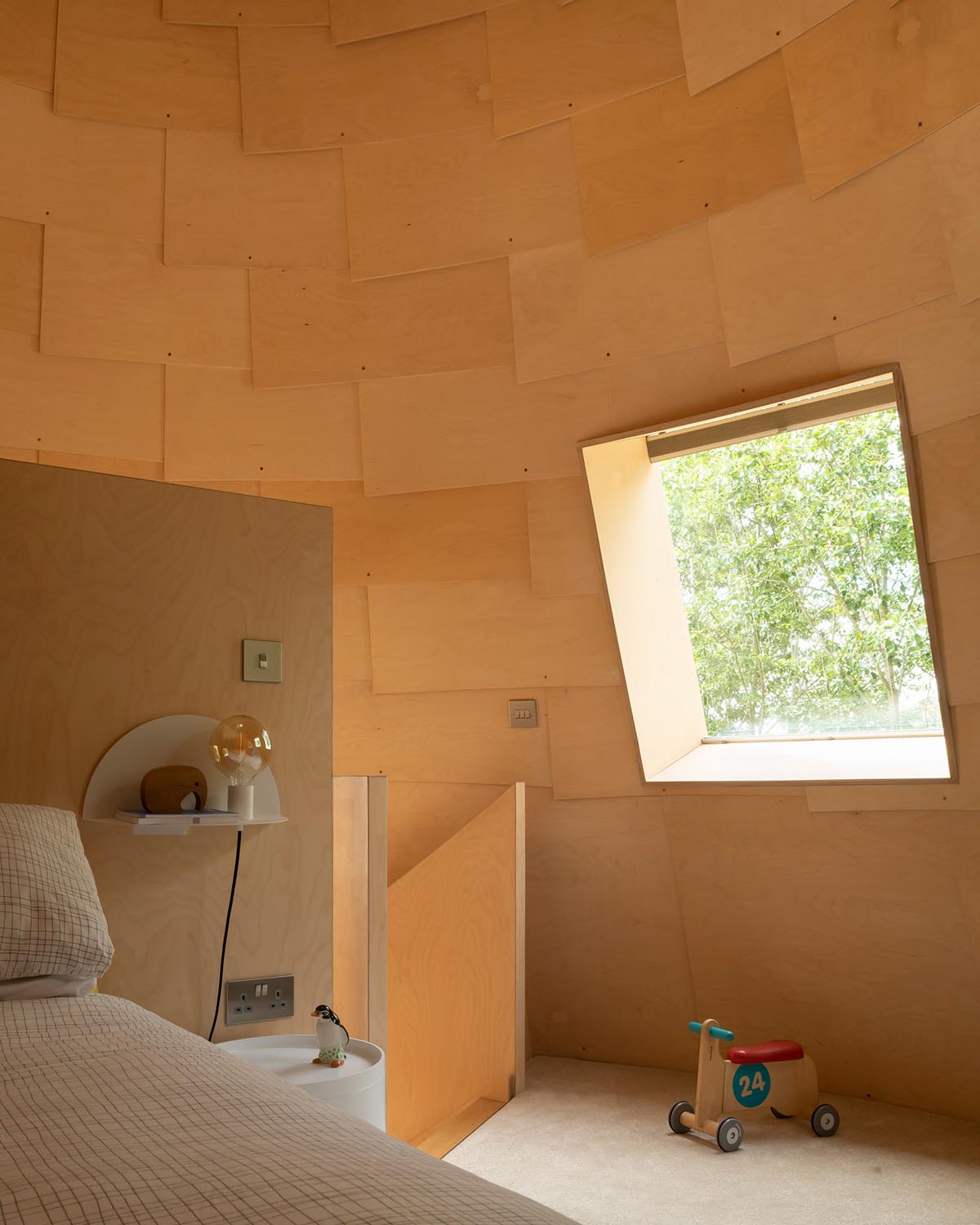 The architects placed each bedrooms in different levels, which creates a play space for the children on the lower level that can later be adapted for study, while the master bedroom is designed with a dressing area in the upper space that opens onto an en suite.

Helical stairs lead the family into the conical sleeping spaces, with thin balustrades made of gently curving plywood. 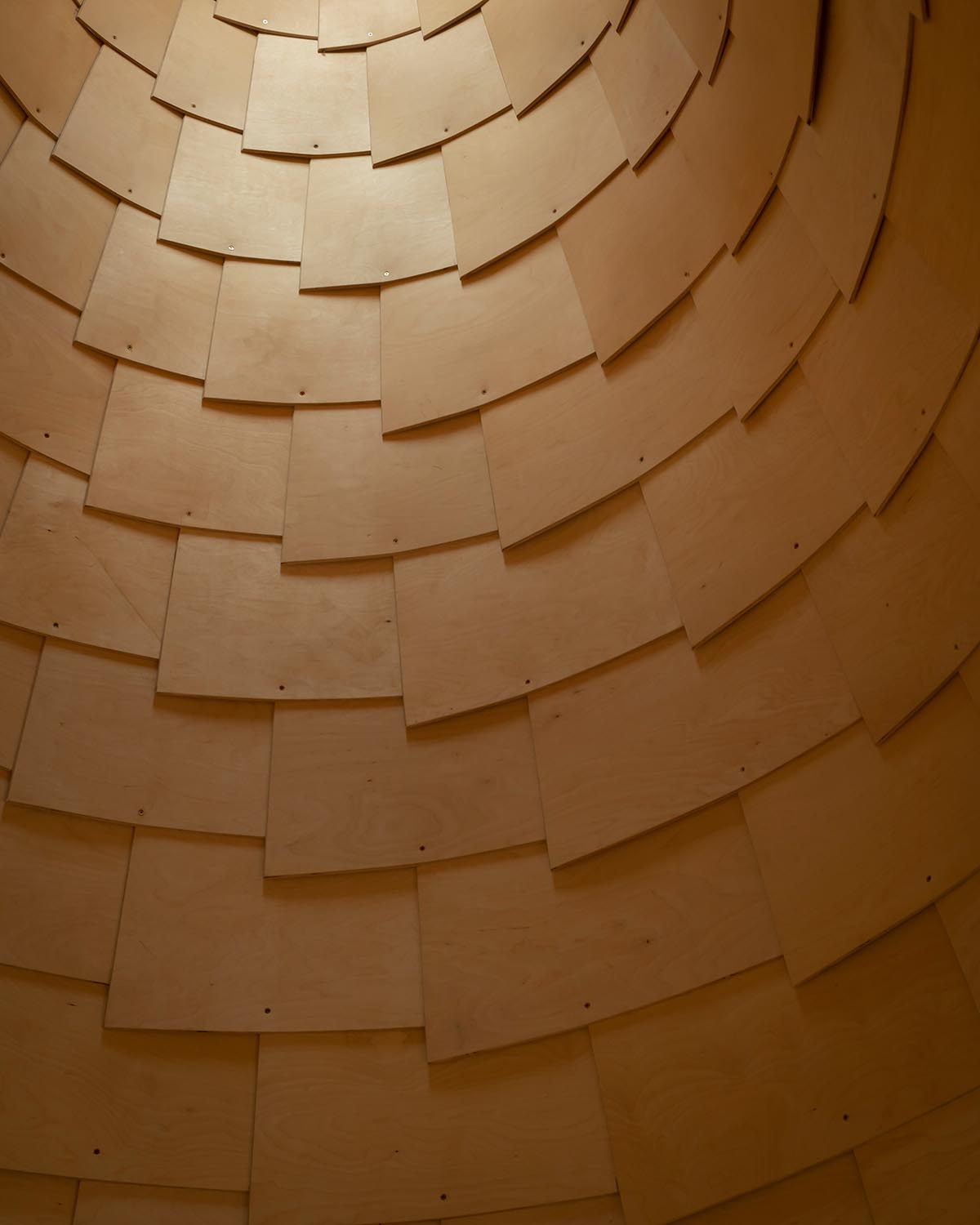 The bathrooms have been created as open-plan niches with no screens, therefore the room size is designed to match its purpose and allow for in-built storage. Microcement is used again to pick up on the materials downstairs and to accommodate the unusual geometry of the interiors. 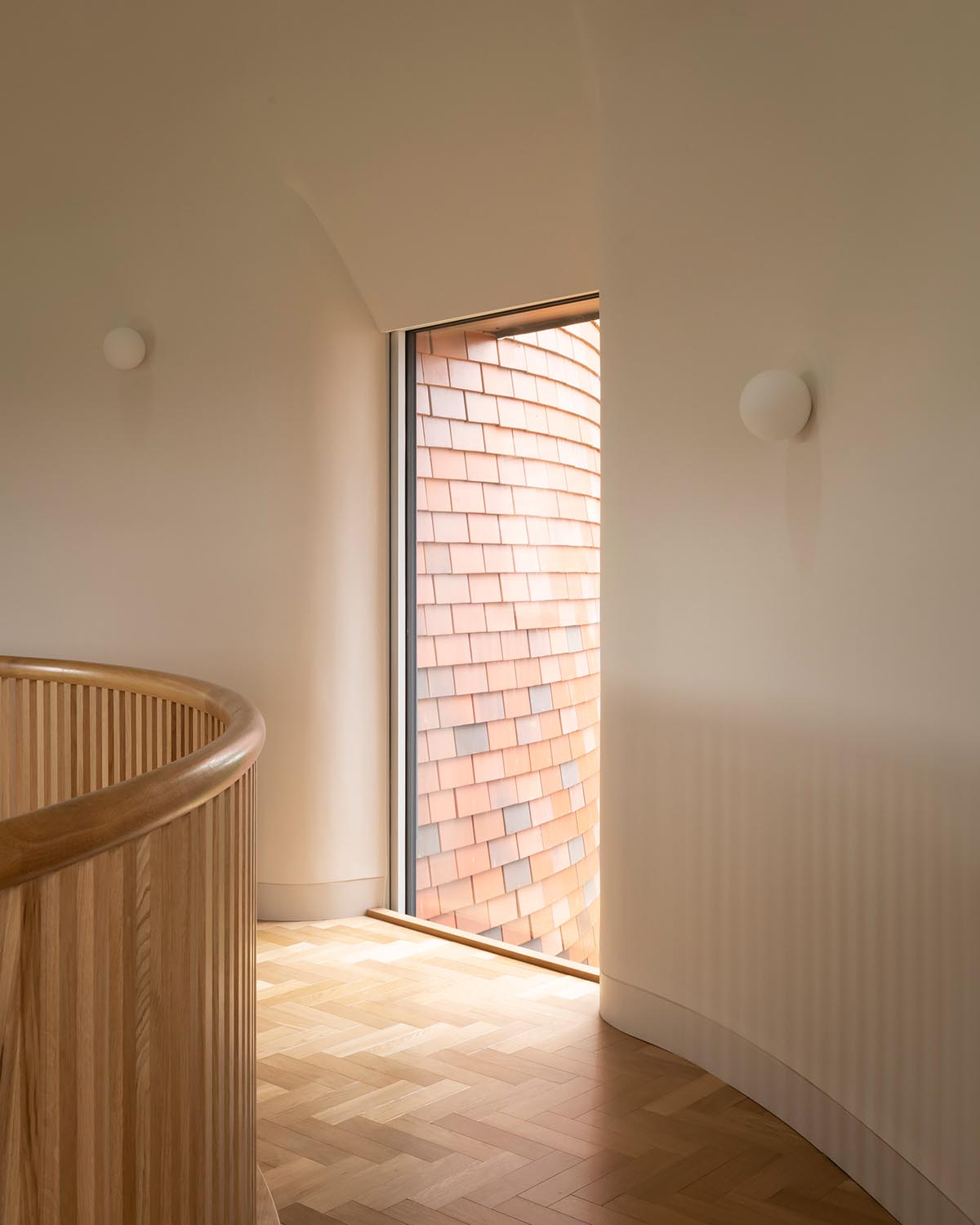 The downstairs bathroom uses mosaic which echoes the grey tones of the concrete. As it is a north-facing room, matt and gloss finishes have been employed to play with reflections from sunlight as it enters the space.

In fact, all window openings have reveals formed by the walls folding into them, which increases the light refraction coming into the rooms. 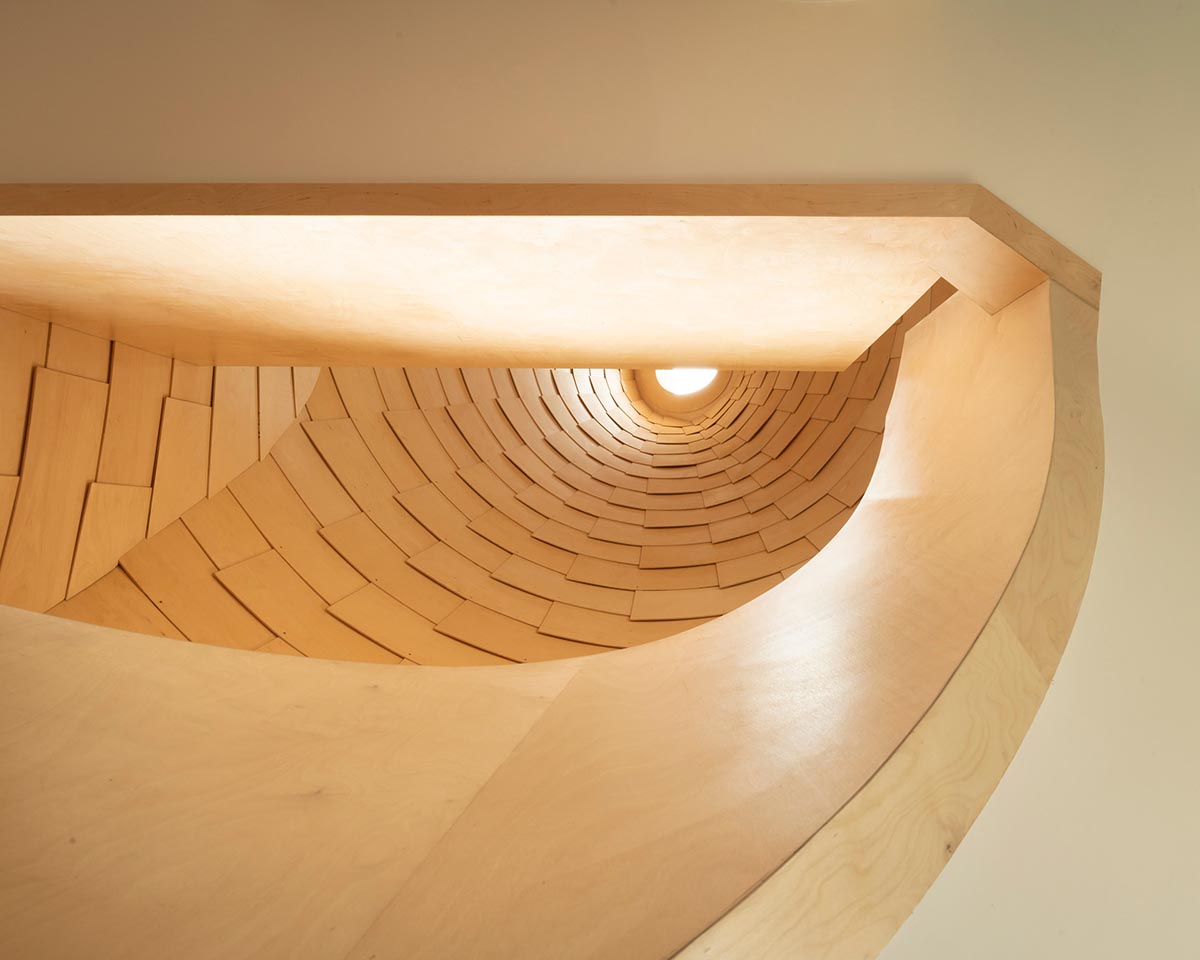 All bedrooms are on the first floor, and each one has its own private staircase to an upper level in the roof cone, creating a building that is entirely communal on the ground, shared on the first, and full of secluded treehouse-like retreats on the second floor.

The building’s sustainable credentials stem from its heavily-insulated timber frame structure, which breaks from the tradition of solid bricks walls usually used to construct oast houses. 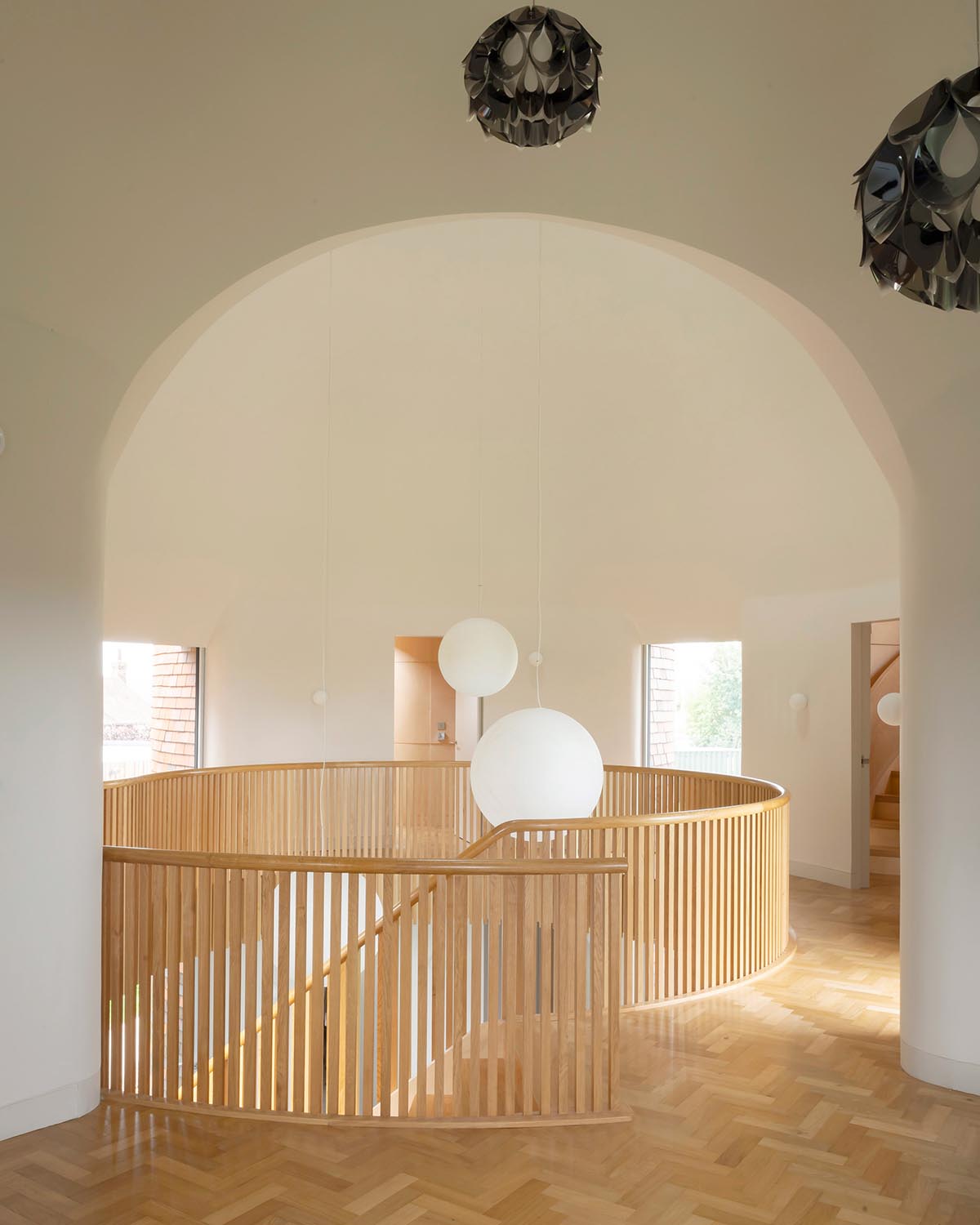 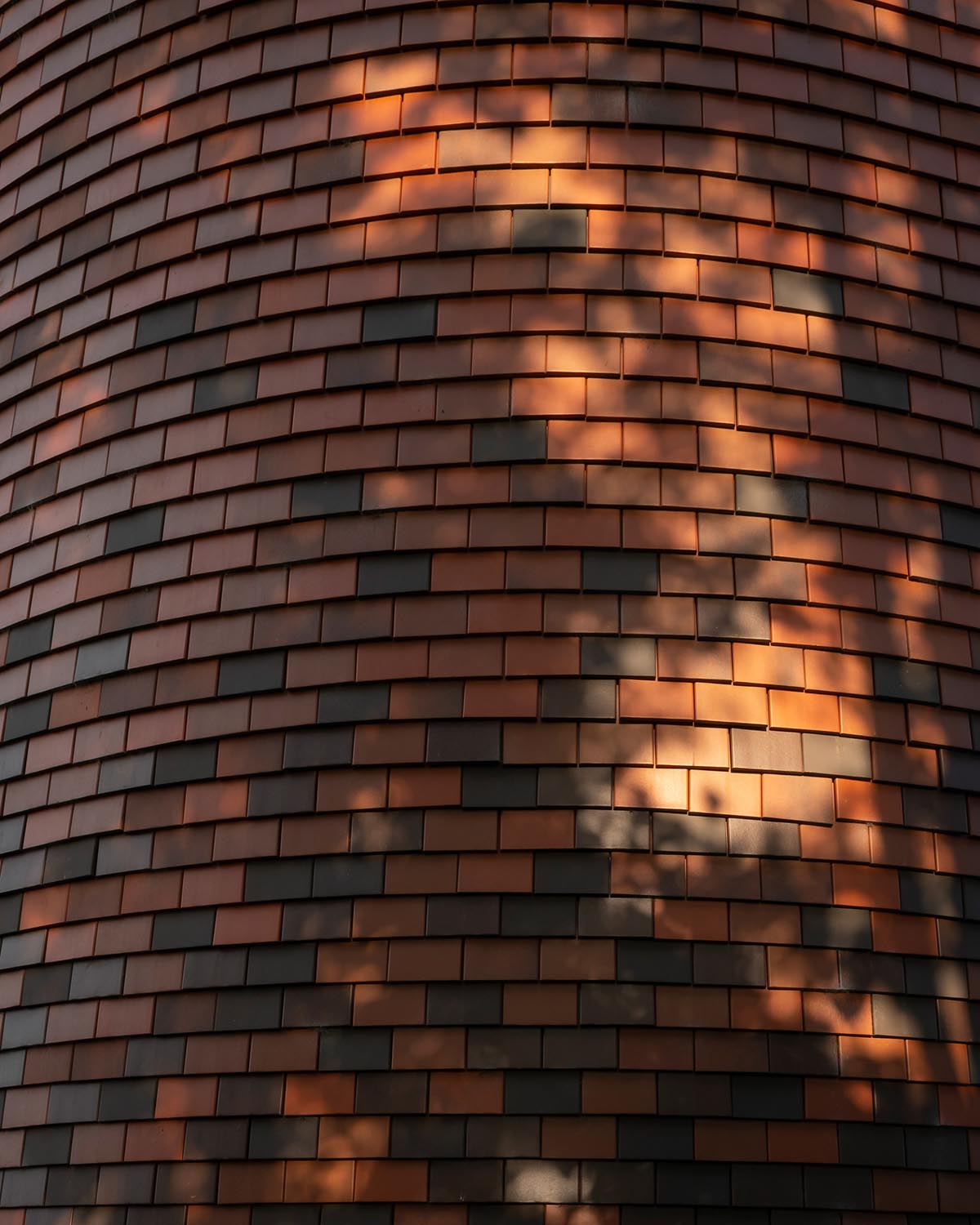 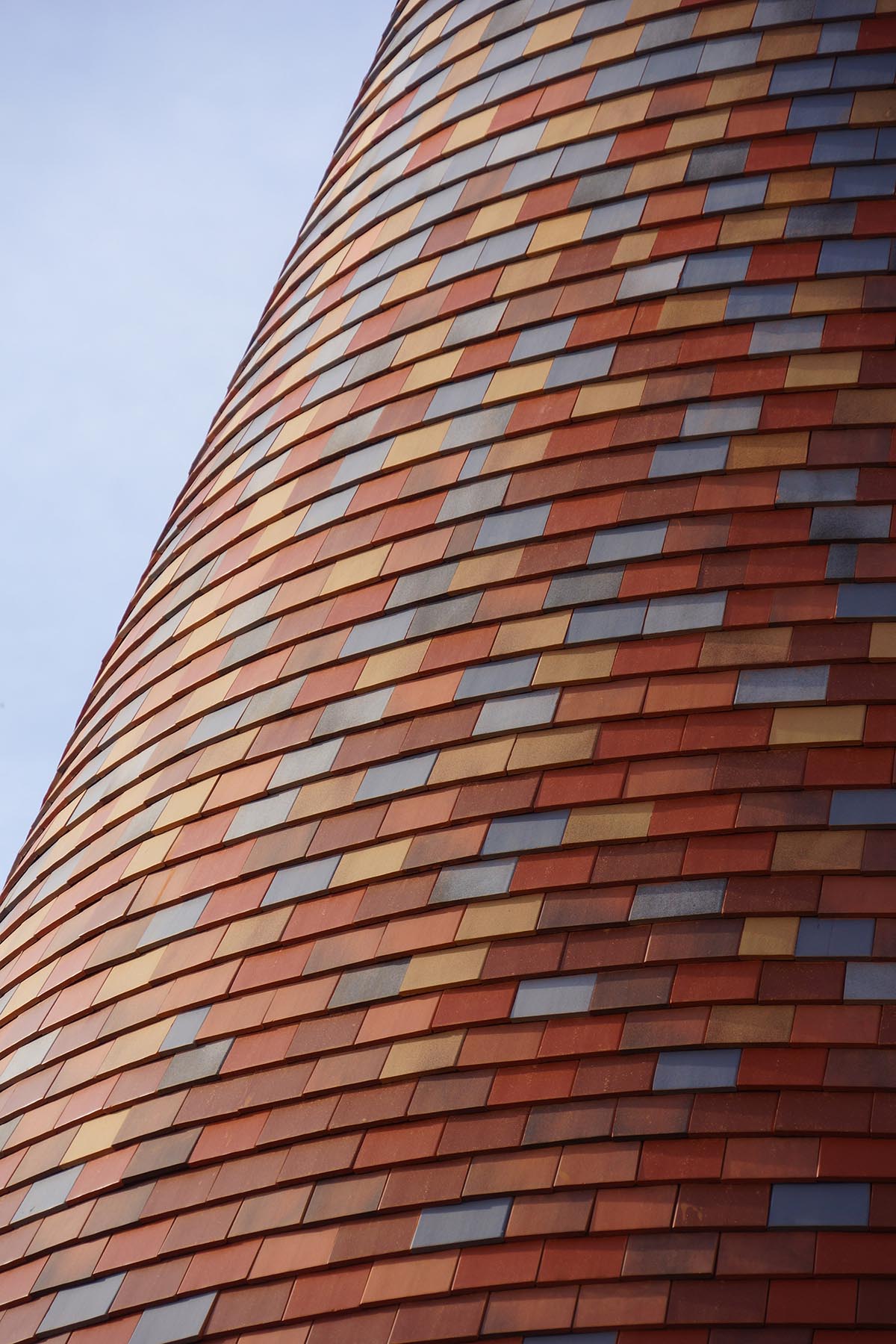 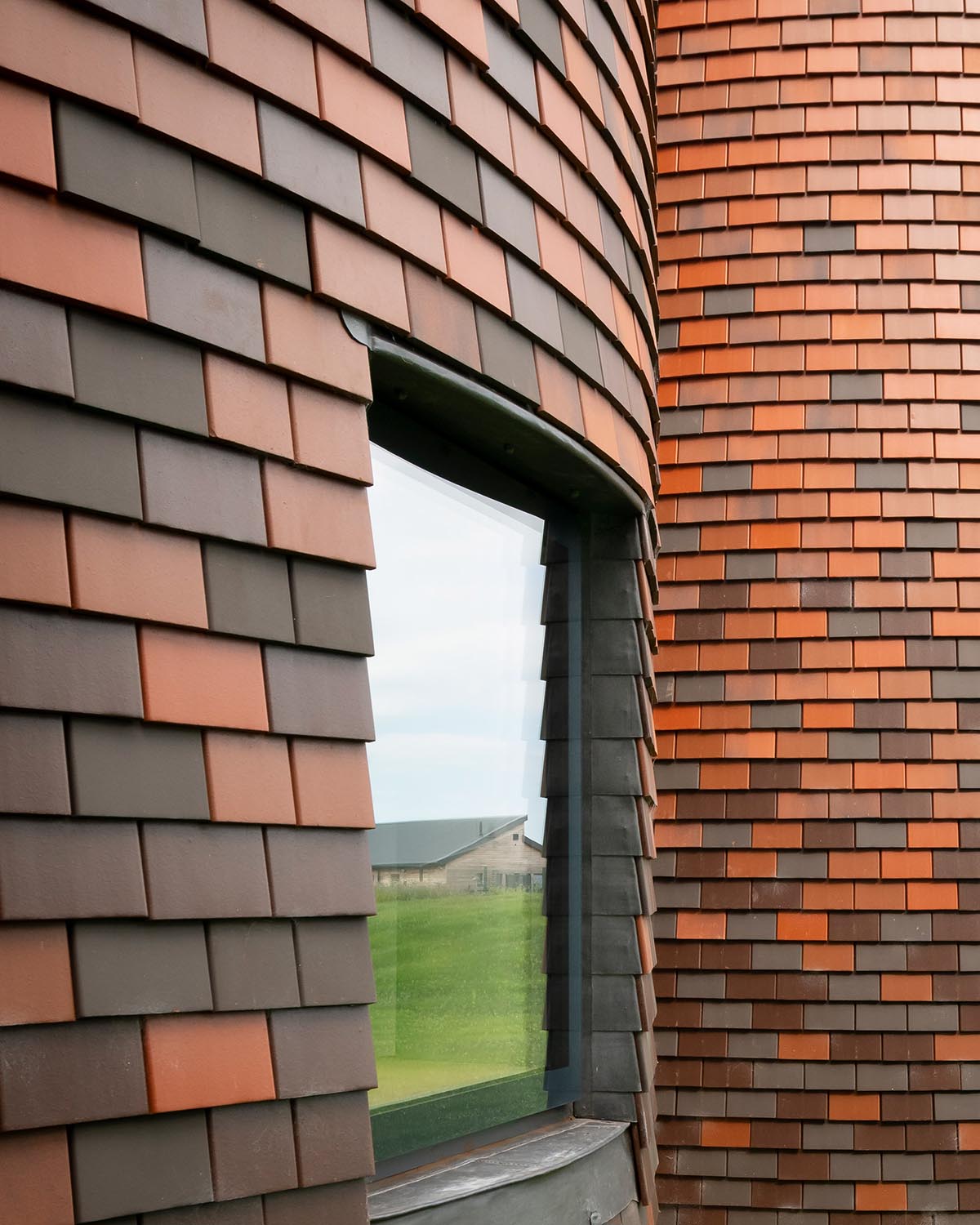 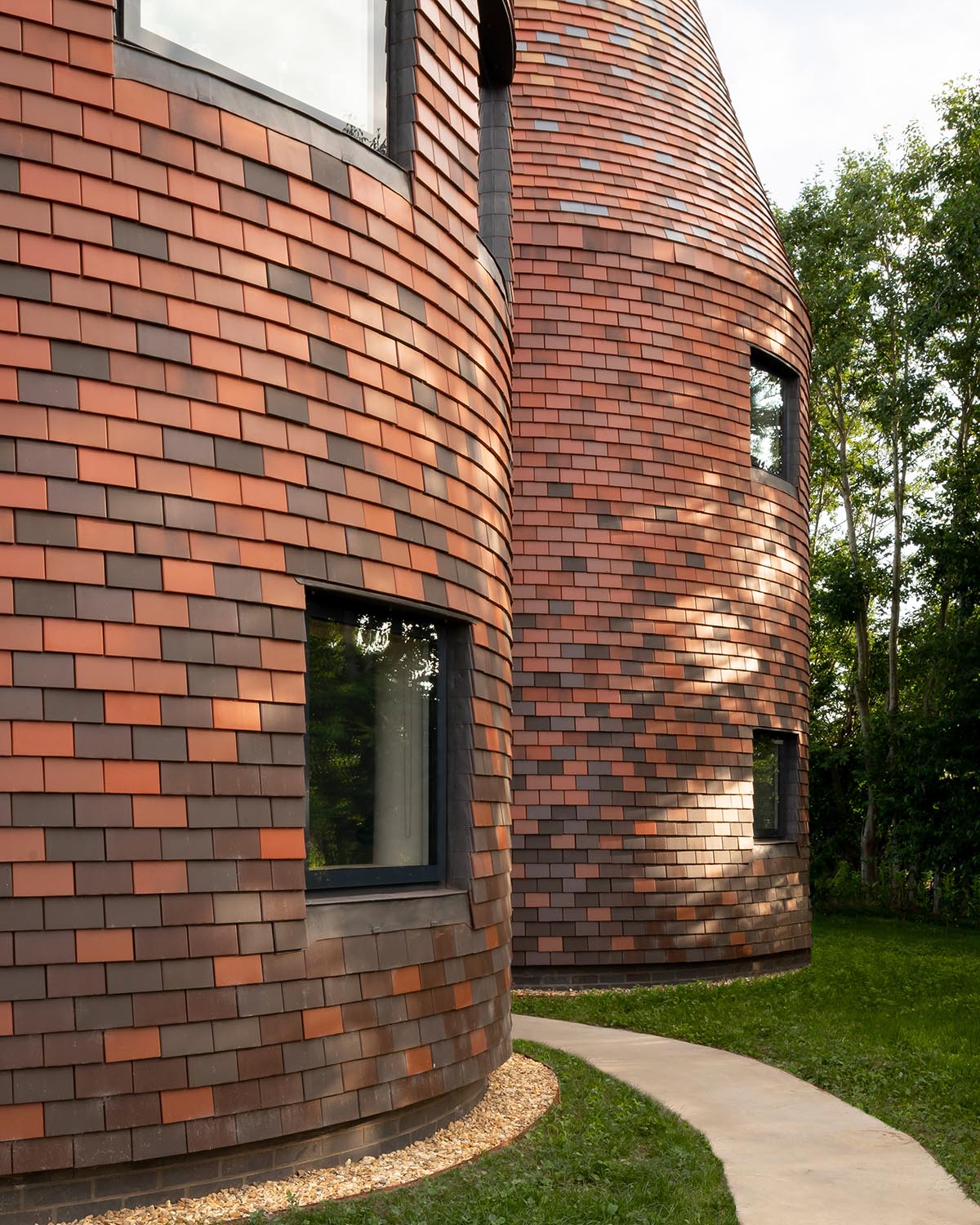 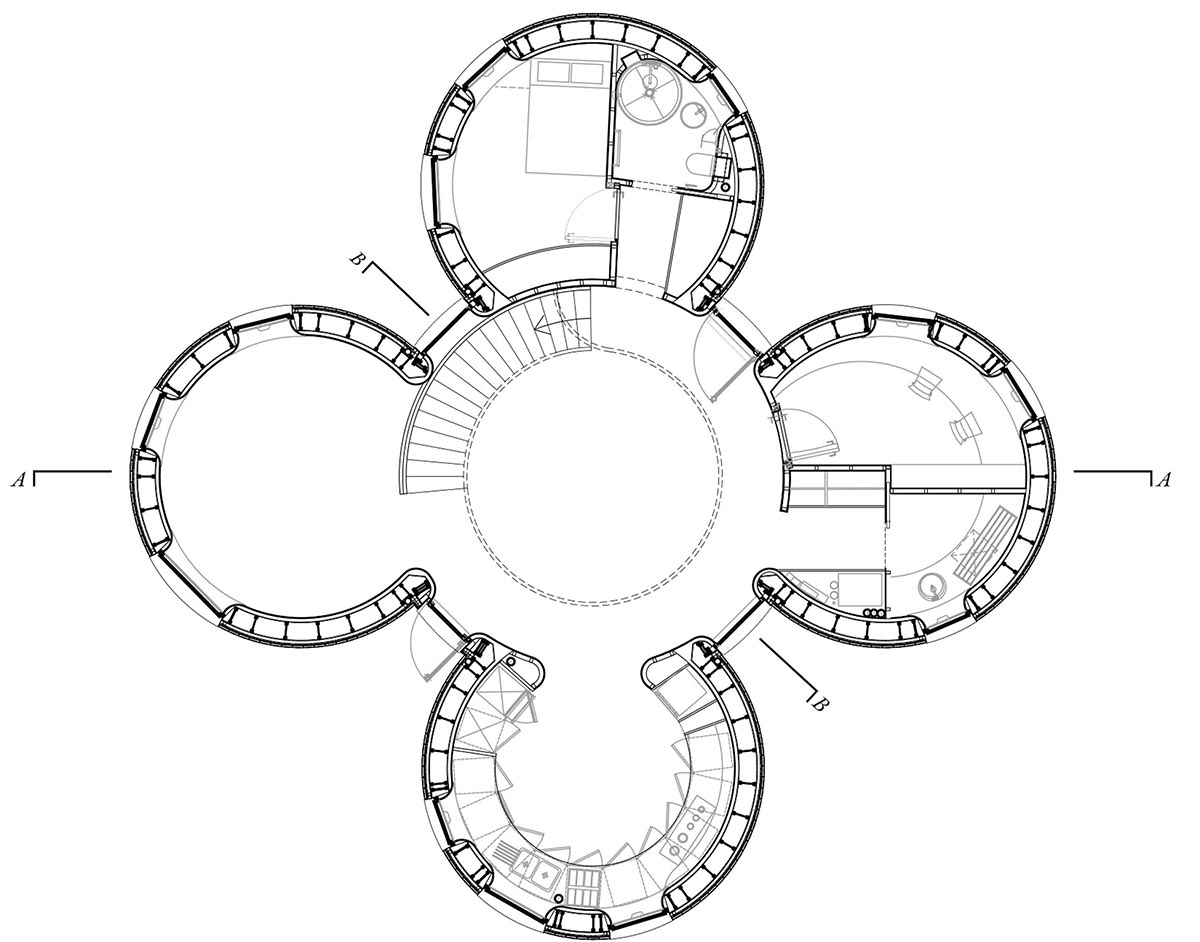 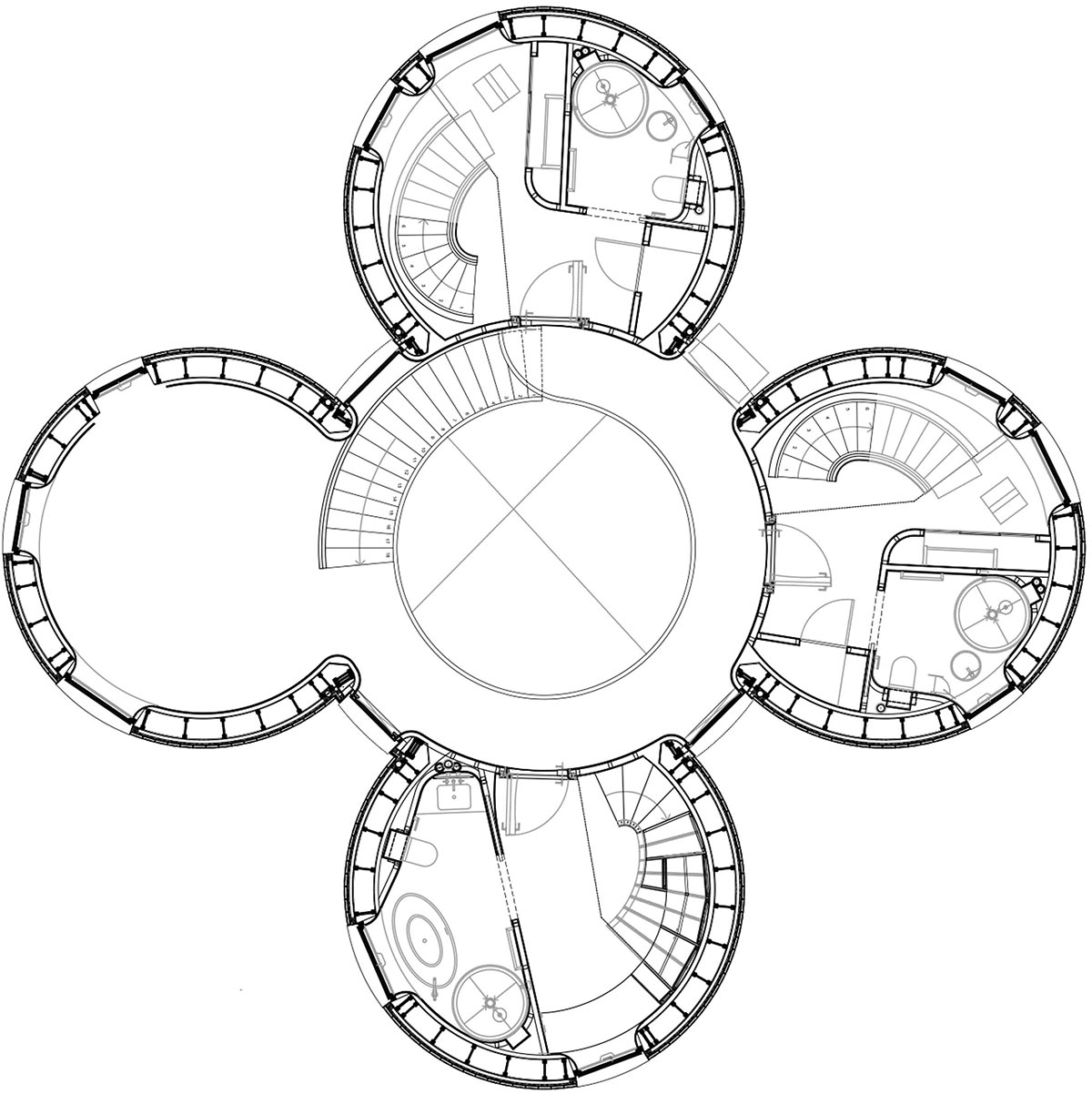 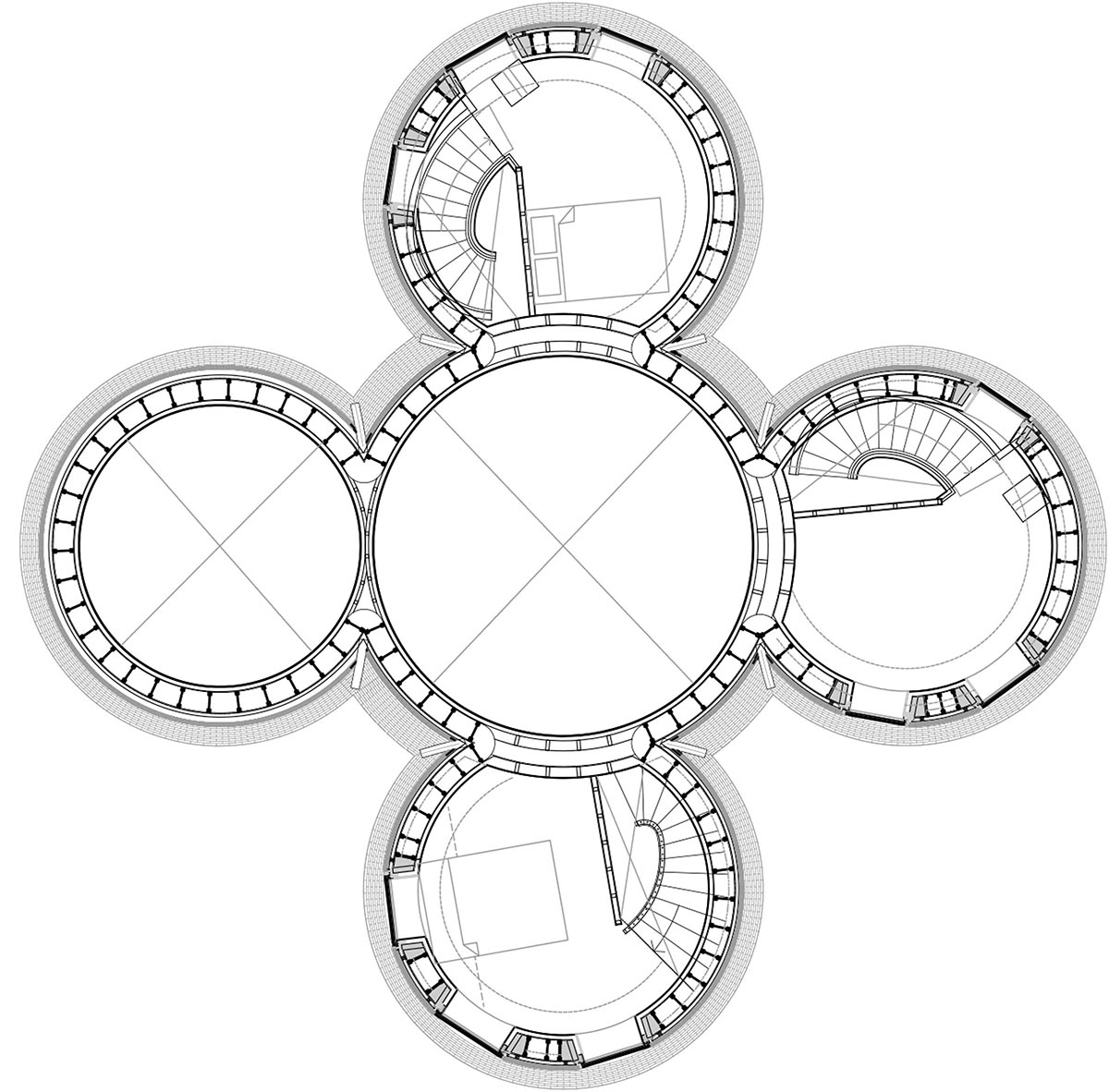 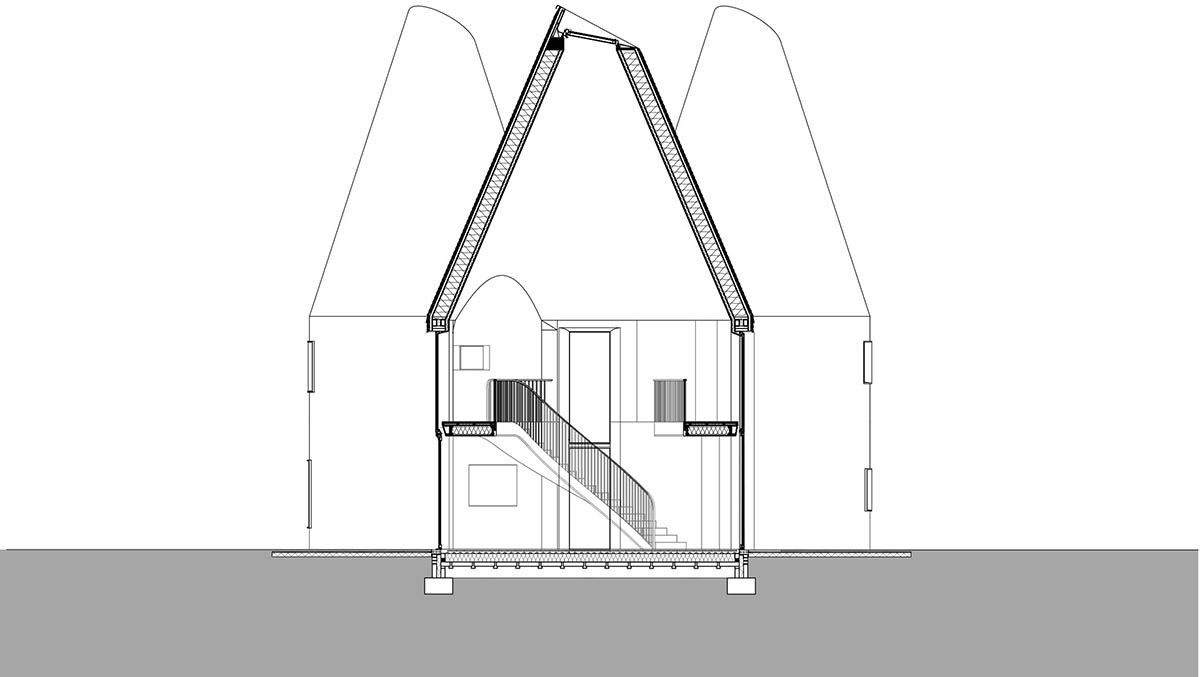