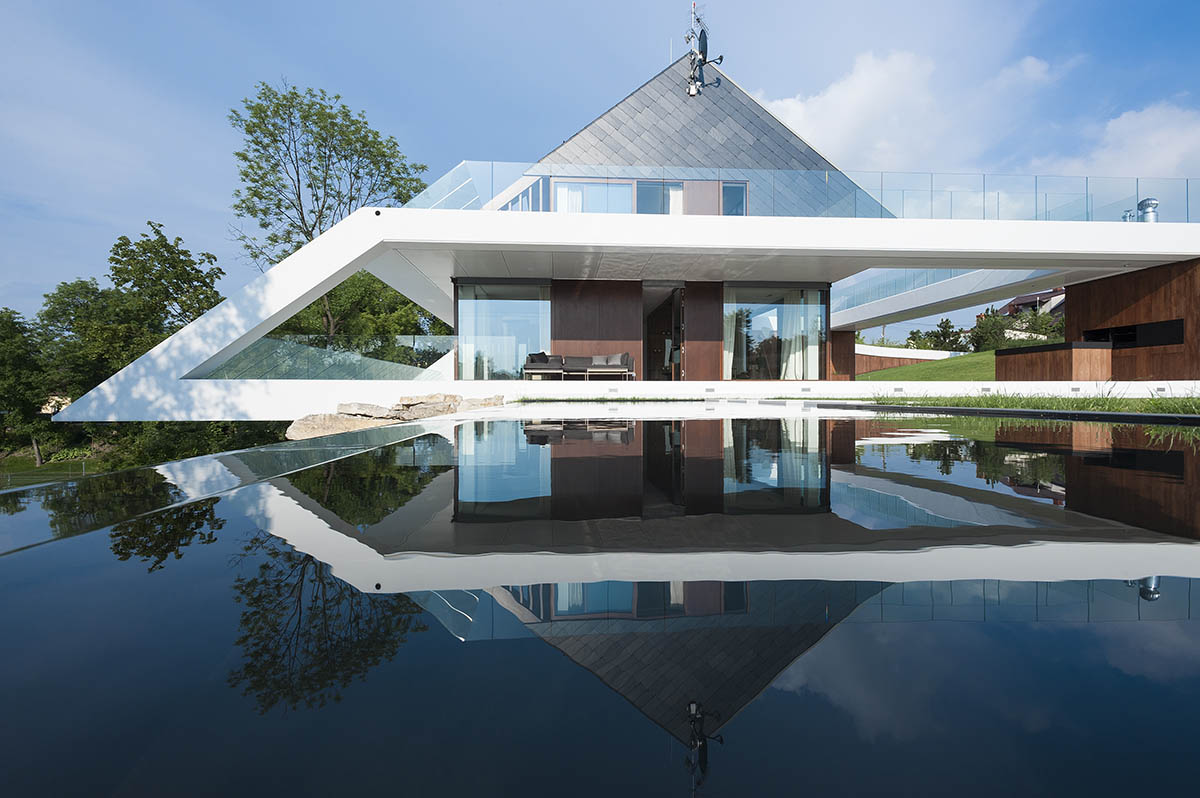 Polish architecture studio Przemek Olczyk / Mobius Architekci has completed a single-family residence by playing with volumes and their angles on a cliff in the Krakow Vistula valley, Poland.

Named EDGE: House on the cliff, the scar of the plot, the limestone scarp breaking into half the groundsite in the Krakow Vistula valley gave rise to one of the most beautiful, contemporary residences in the former capital of Poland.

The landscape of the Krakows foothills creates a single-family residential development with gable roofs. This is the result of the local law, which imposes the preservation of the traditional form of houses with low building intensity.

In this context, architect Przemysław Olczyk, the owner of the Mobius Architekci office, undertook an attempt to implement a modern suburban house with an area of 860 square meters. 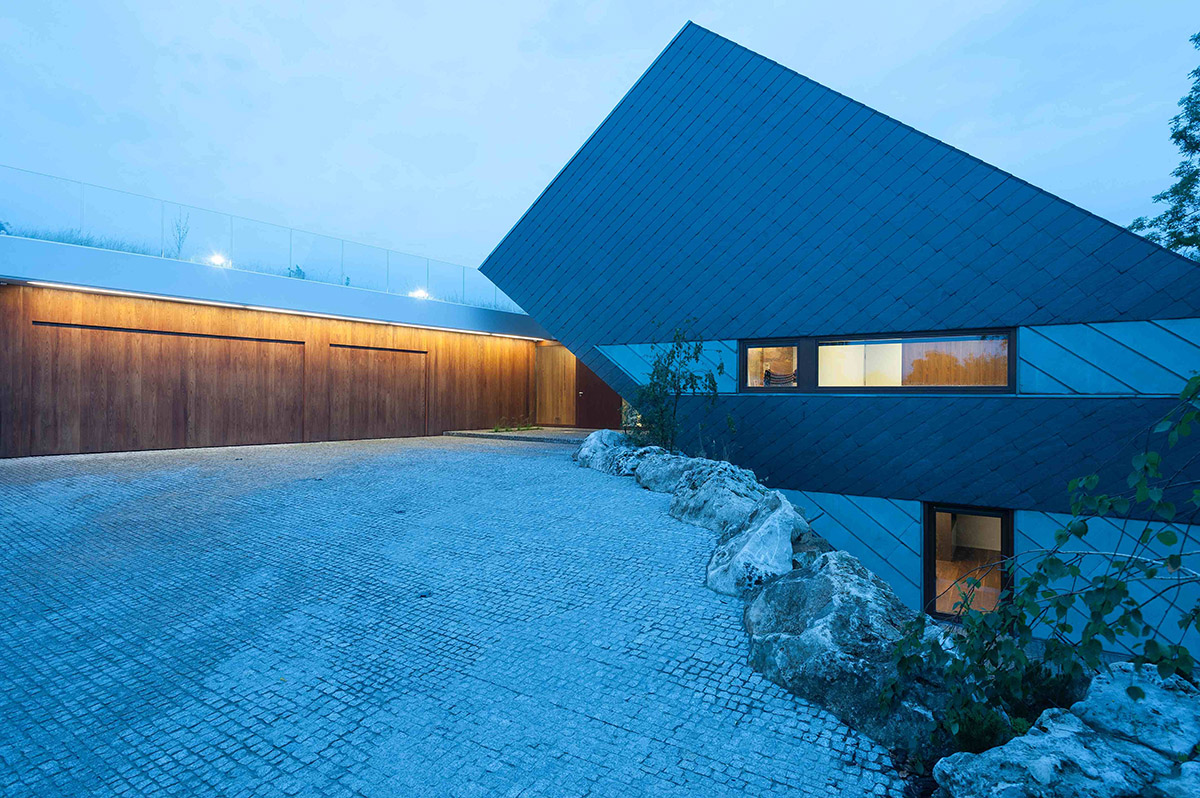 The basic design challenge was to deal with the obvious blemish of the area. At first glance, the limestone scarred in half of the plot significantly limited the possibilities of its development.

The area at the foot of the escarpment was a pleasant cover, giving the architect the opportunity to shape the intimate functions of the house. In turn, part of the area located on a hill above the cliff, opened the plot to the beautiful, undulating panorama of the surrounding hills, but also neighboring buildings. The next goal was to combine the strengths of both these orders with a coherent form. 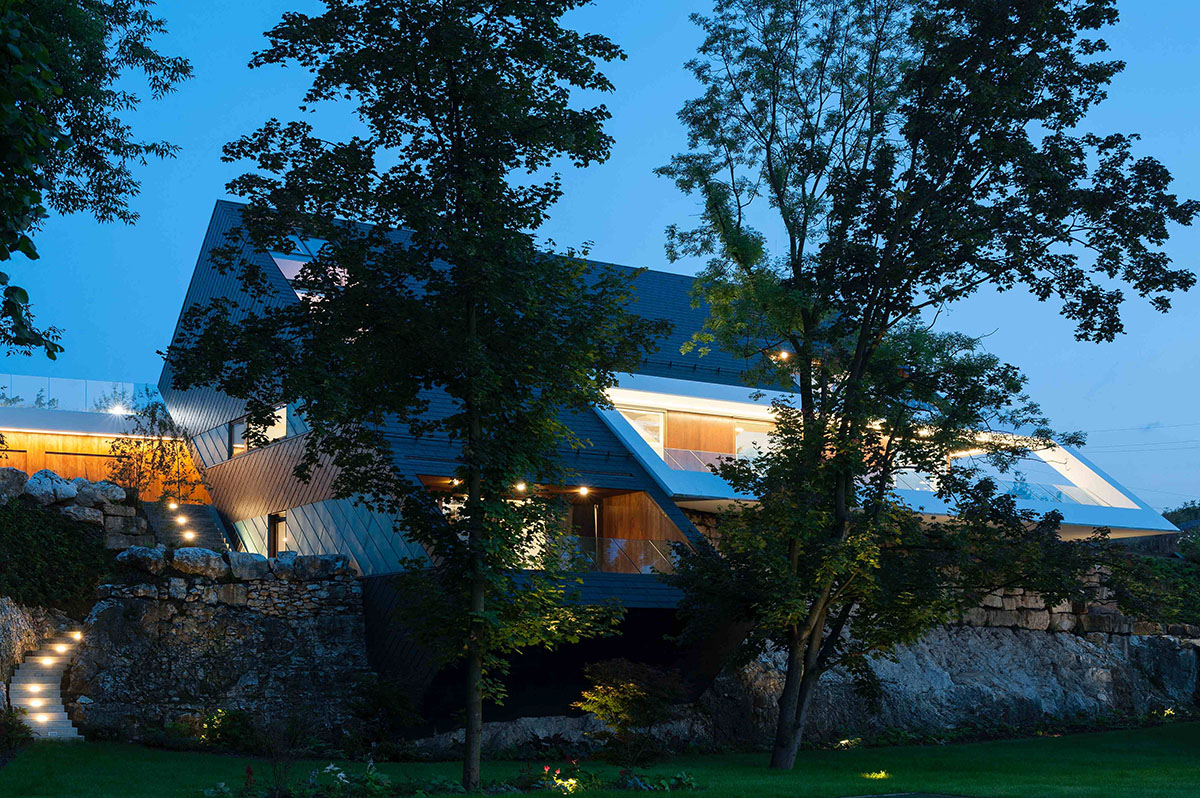 The investor did not make it easier for architects to recommend that a modern house should have a flat roof. Meanwhile, according to local records, houses in this area must have pitched roofs, with eaves and slopes incline min. 37 degrees. Architects began experiments on the model.

The rectangular shape of the modernist form was set on the edge of the cliff, and then they extended it enough to gravitate down. The so-called model the overturned box supported at the foot of the cliff created a bridge between the parts of the plot that had been separated until now, and the side walls formed the curvature of the roof required by law. 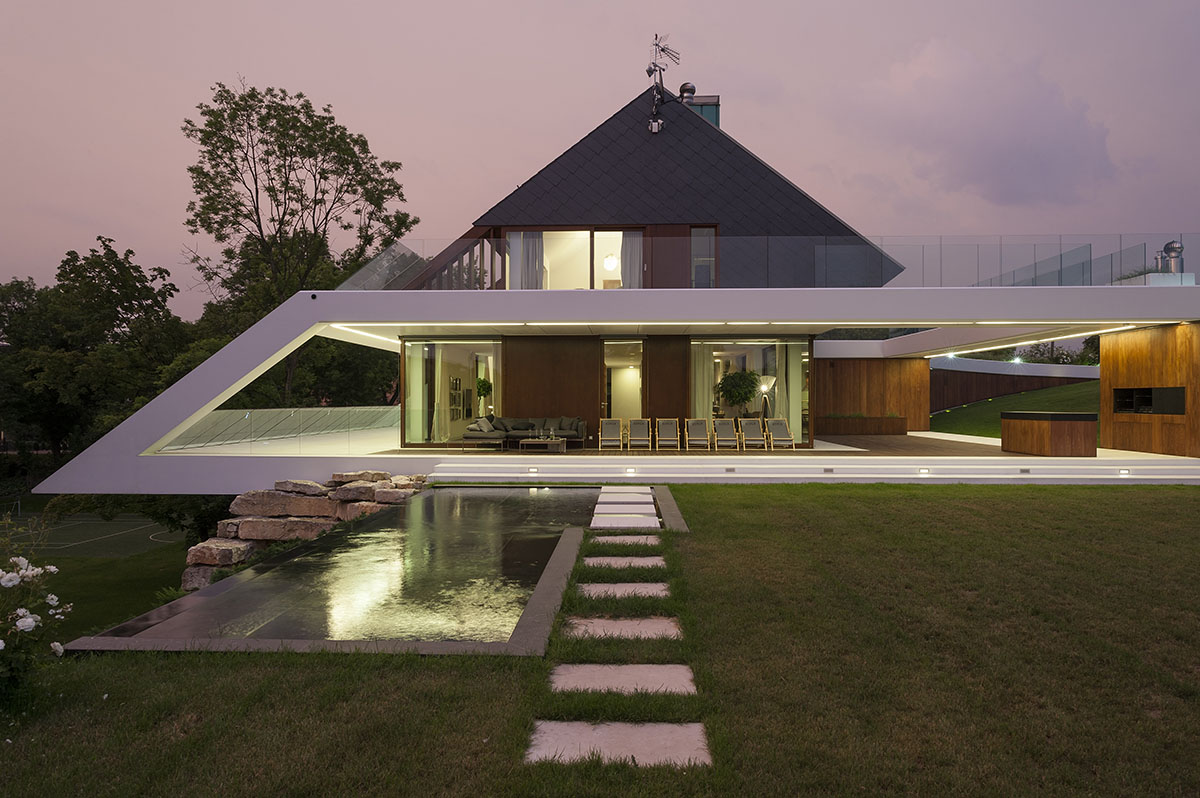 Both private zones at the bottom of the plot and semi-public with exposed viewing opening in the area were connected by a form that satisfied the investor and filled in the provisions of the local plan.

The main residential functions of the house are located in a tilted rectangular prism. The zone located at the elevation of the area was separated from the neighborhood due to two wings with additional functions - garage and swimming pool. 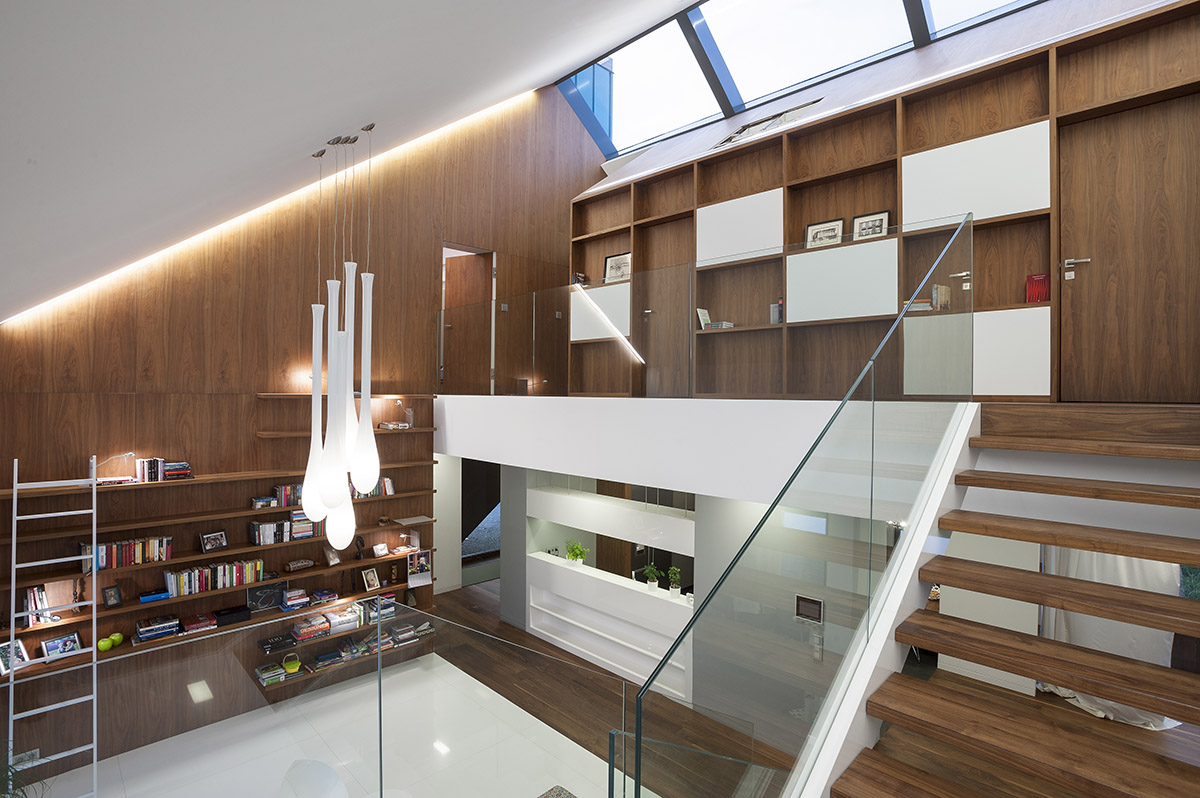 Their arms are shaped on the principle of soft arches with white walls partially covered with wood. Along with the roofs covered with soil, they created a screen that seems to be a natural element of the slope, revealing in places limestone rock - in fact, it is a wooden facia of the facade that houses the main entrance to the building. Thanks to this, the most exposed zone became somewhat sunk in the depths of the plot, providing users with privacy so desirable in this place. 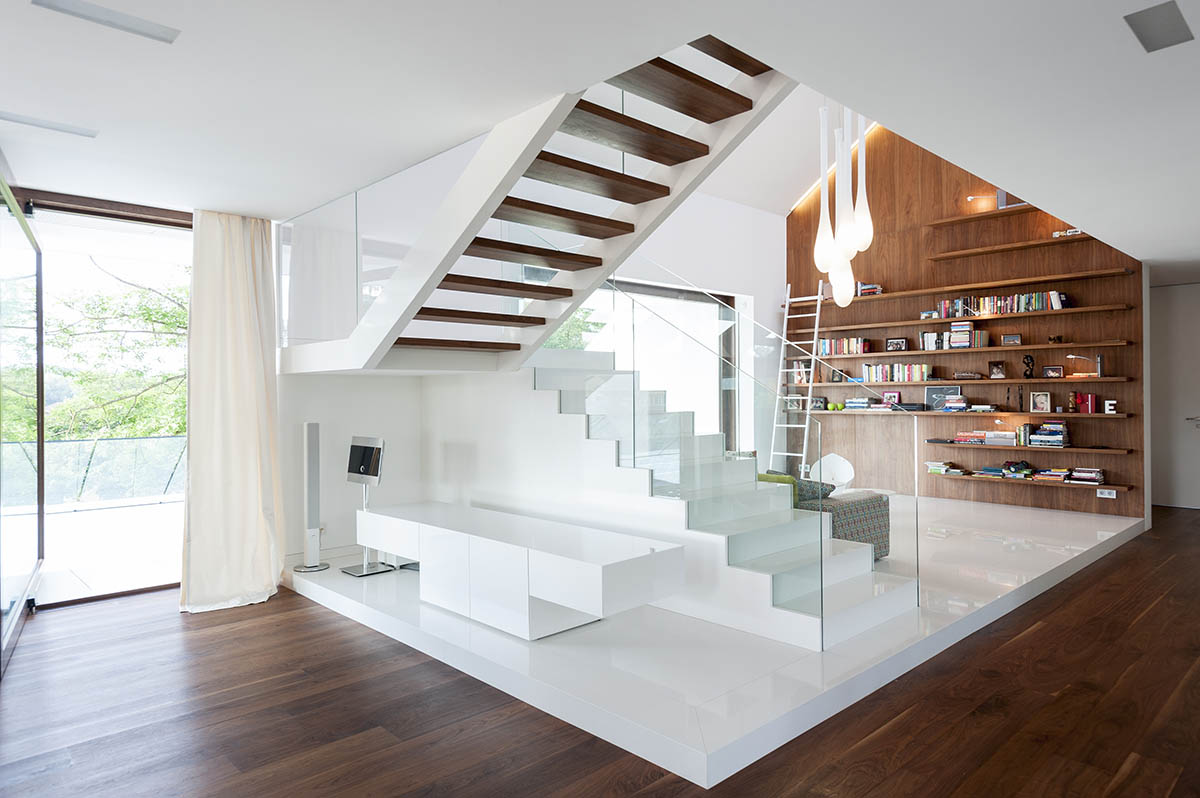 The soft shape covers the angular shape of the house creating the hoods required in the local plan. The arms also made it possible to introduce attractive home openings to the surrounding garden.

The architect formed from them footbridges and balconies, the largest of which is suspended on a meter-long boom eight meters above the plane of the cliff. It is also a huge frame. The impression of the skilful rule of the architect over space is the most noticeable here. 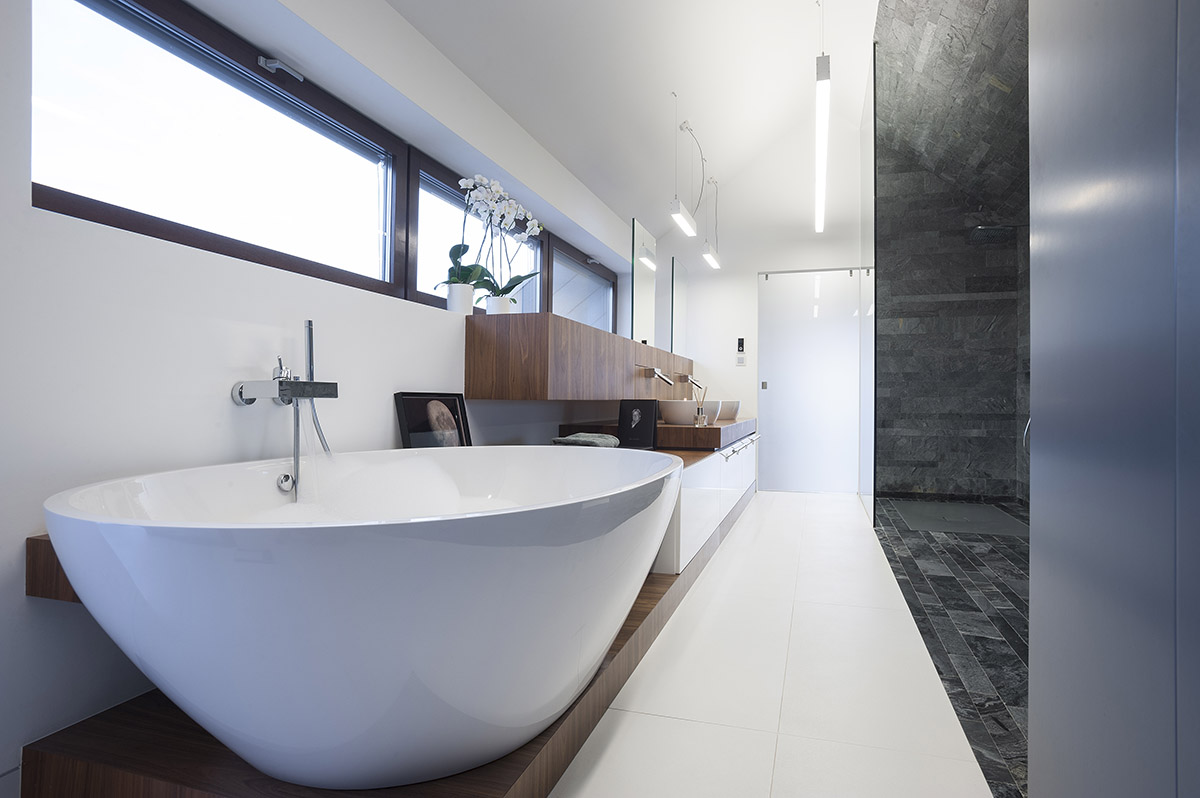 The effect of skillful playing with forms strengthens the color distinction of the cuboid, which is covered in its entirety with a local slate of anthracite color, with white added to it, a winding form. 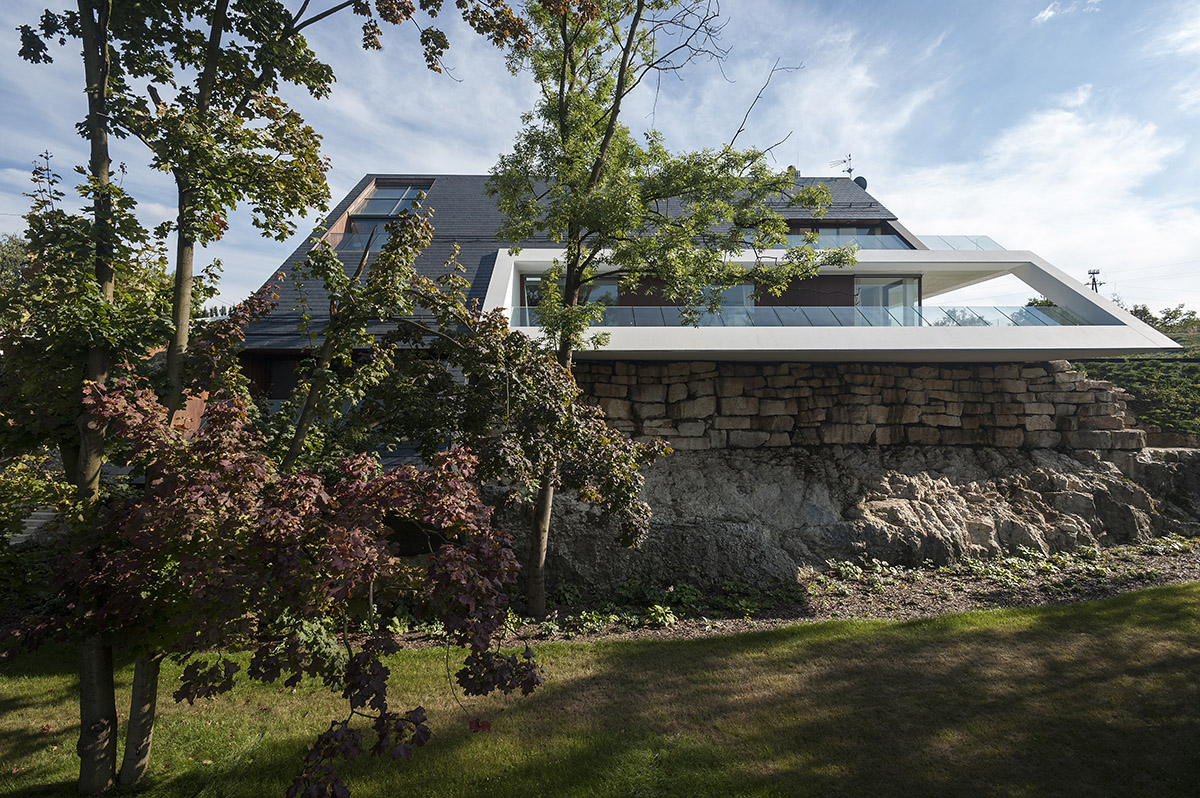 "Edge House is currently one of the most modern villas in Poland," said the studio. "Its interiors, designed consistently using the same wood as the outside ..., are a willingly used photographic plan of photographic sessions, such fashion brands as Deni Clair."

The project has won the prestigious European Property Awards for the best single-family home in Poland. The facility was also nominated for the Mies van der Rohe Award and the International Architecture Awards. 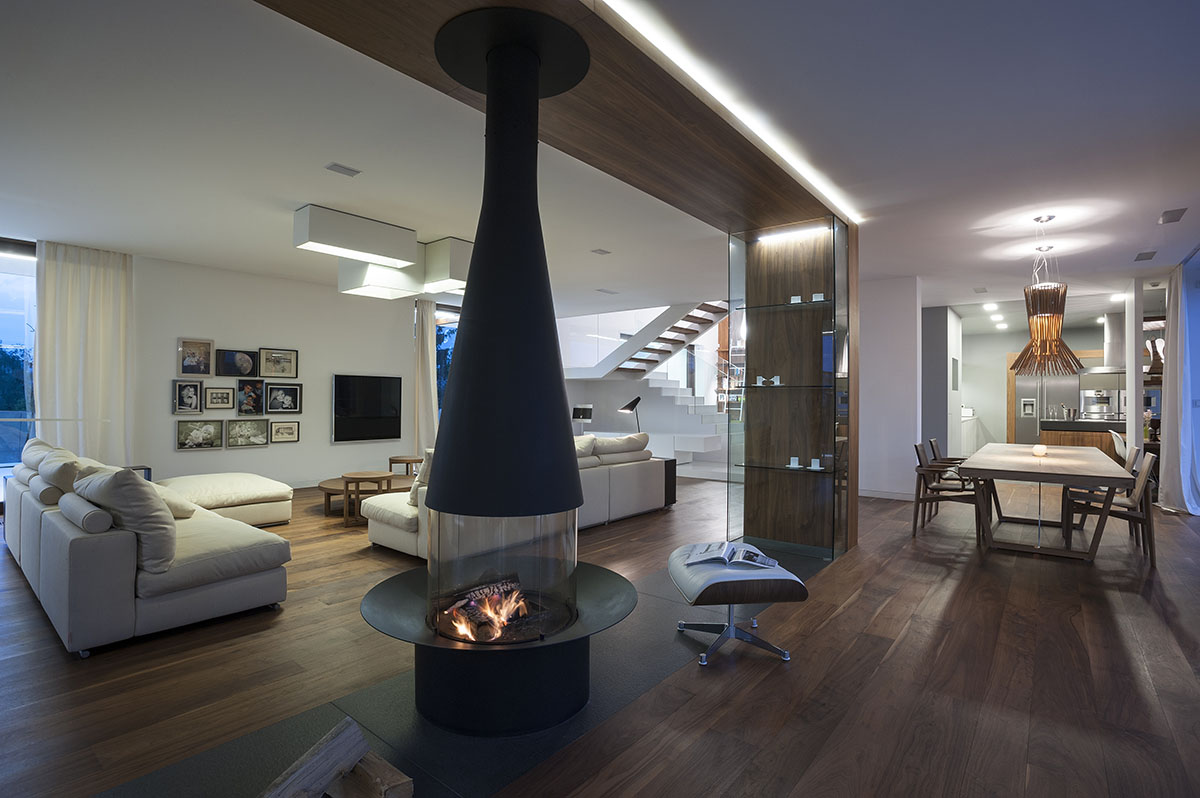 The original form resulting directly from the conditions of the place, as well as the nobility of the materials used, enriched with the best world design, are elements that are characteristic of Przemek Olczyk's style, which guarantees the uniqueness of his designs and the timeless dimension of the investments. 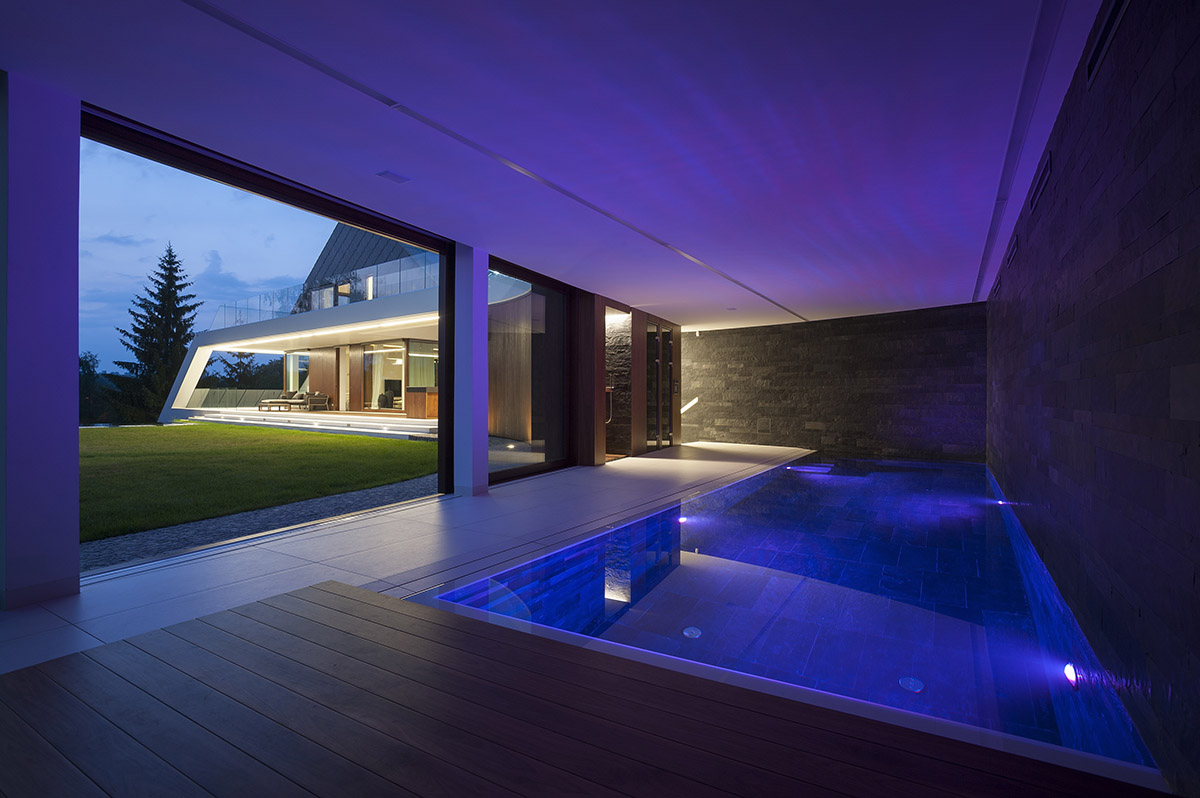 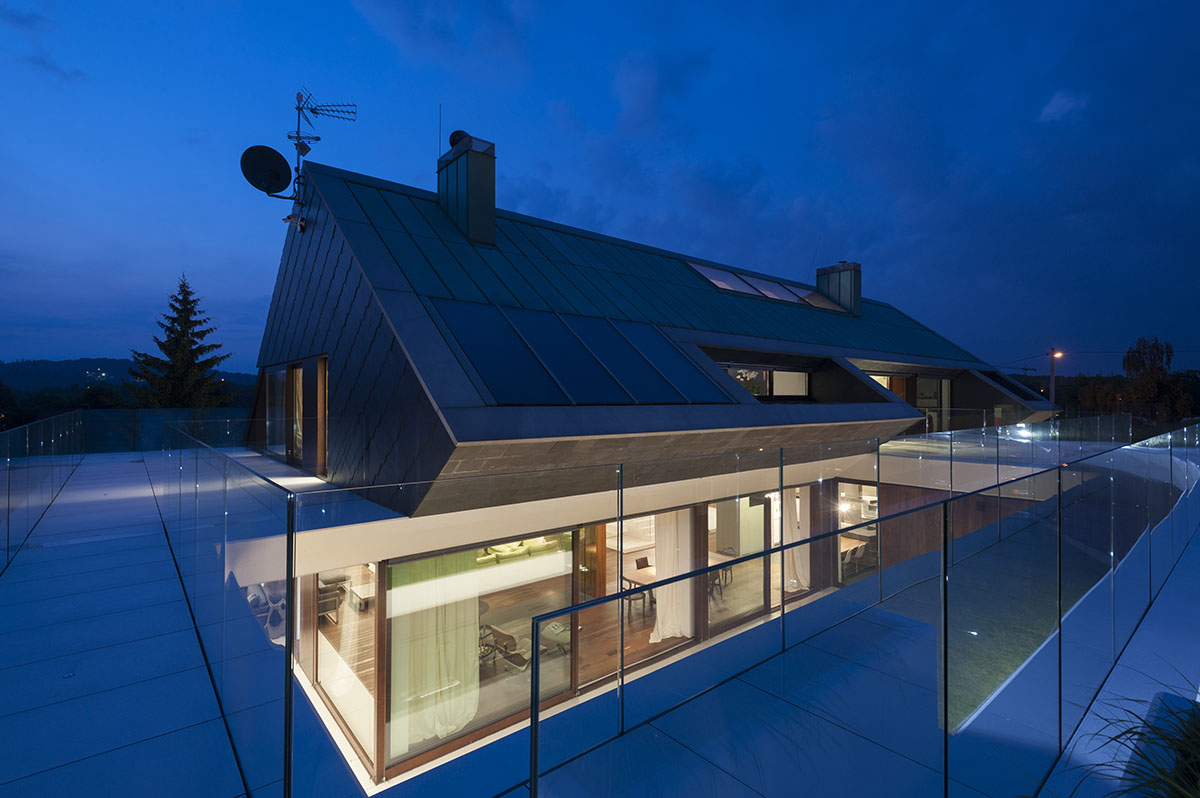 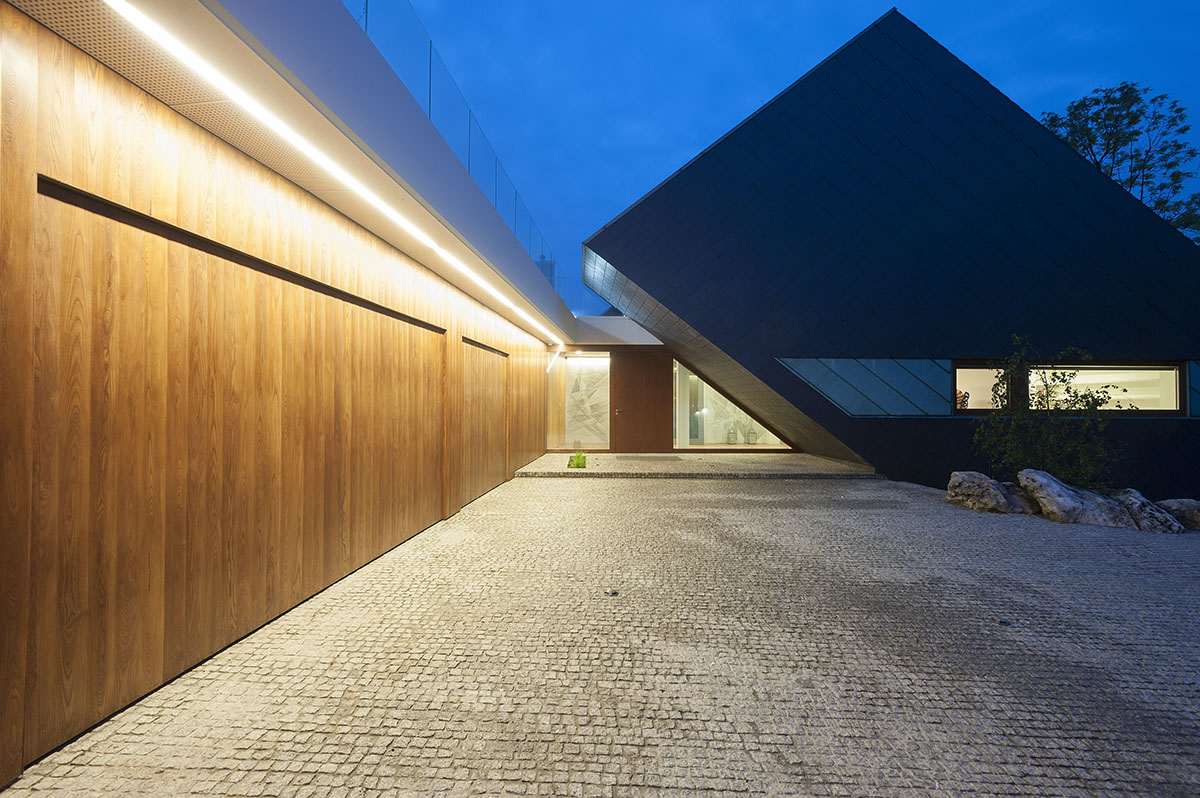 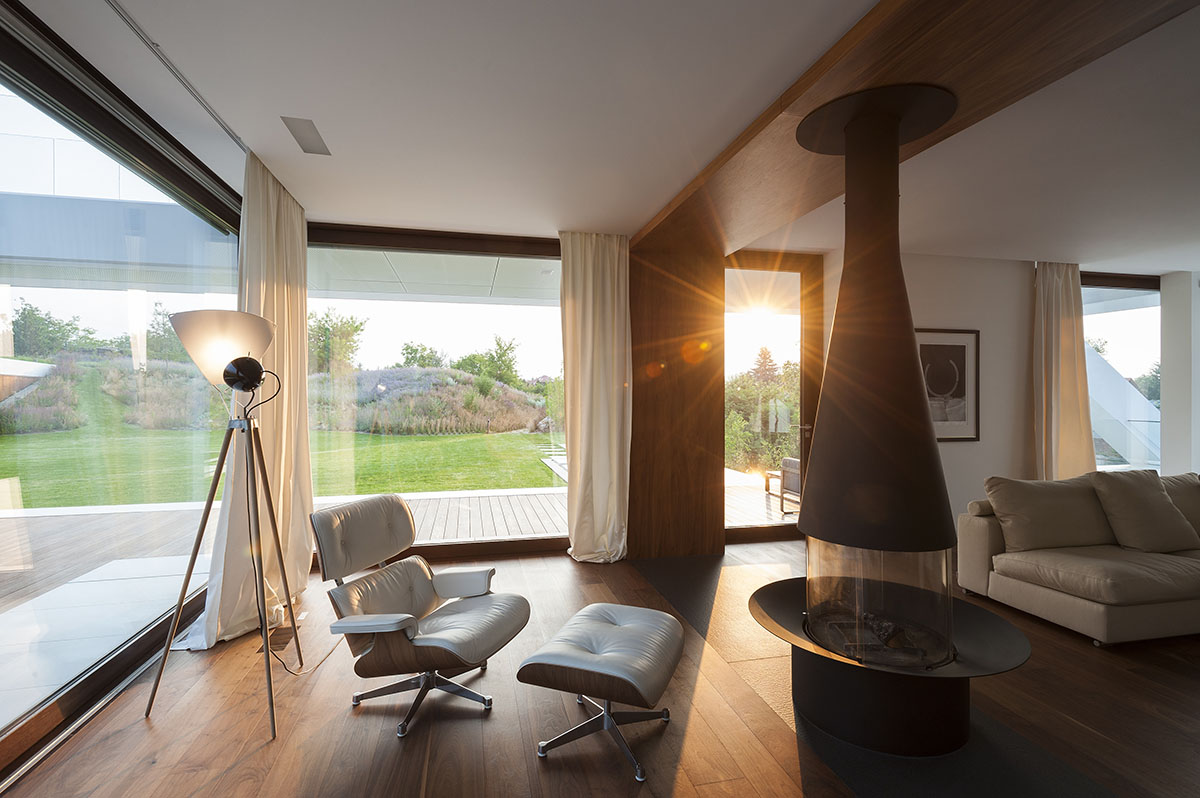 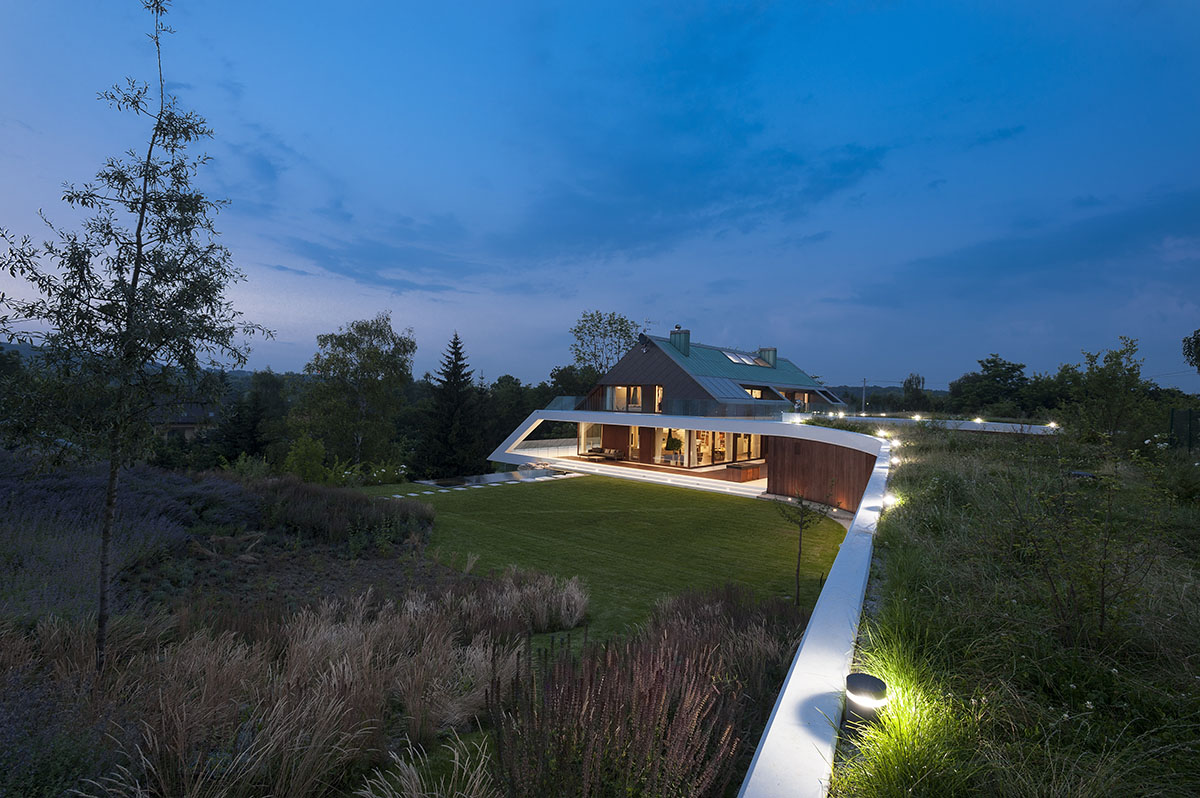 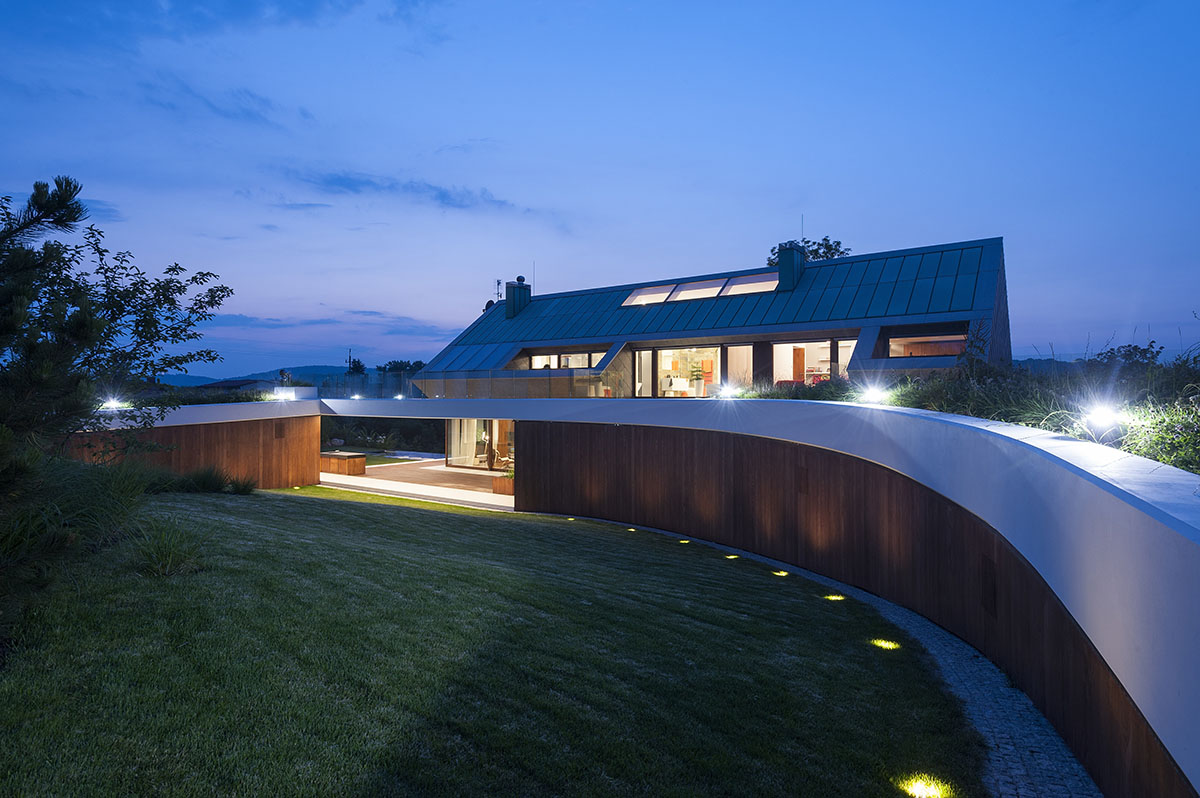 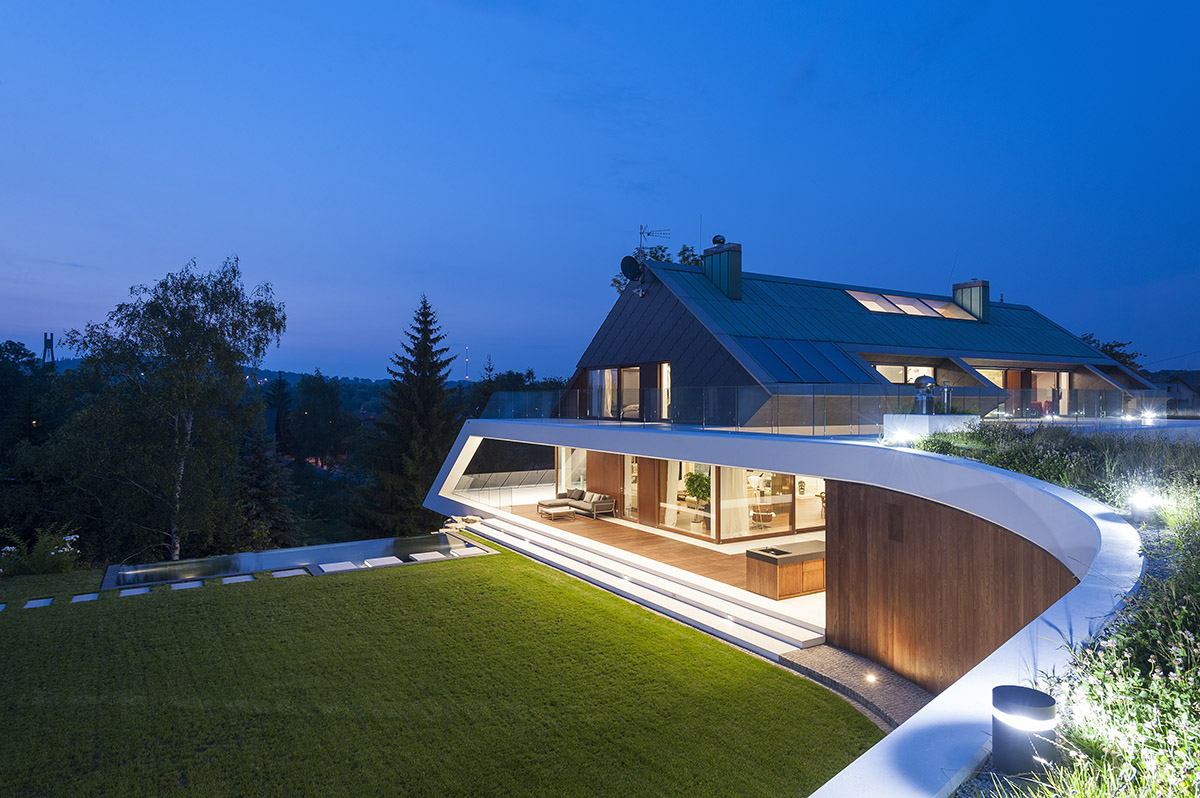 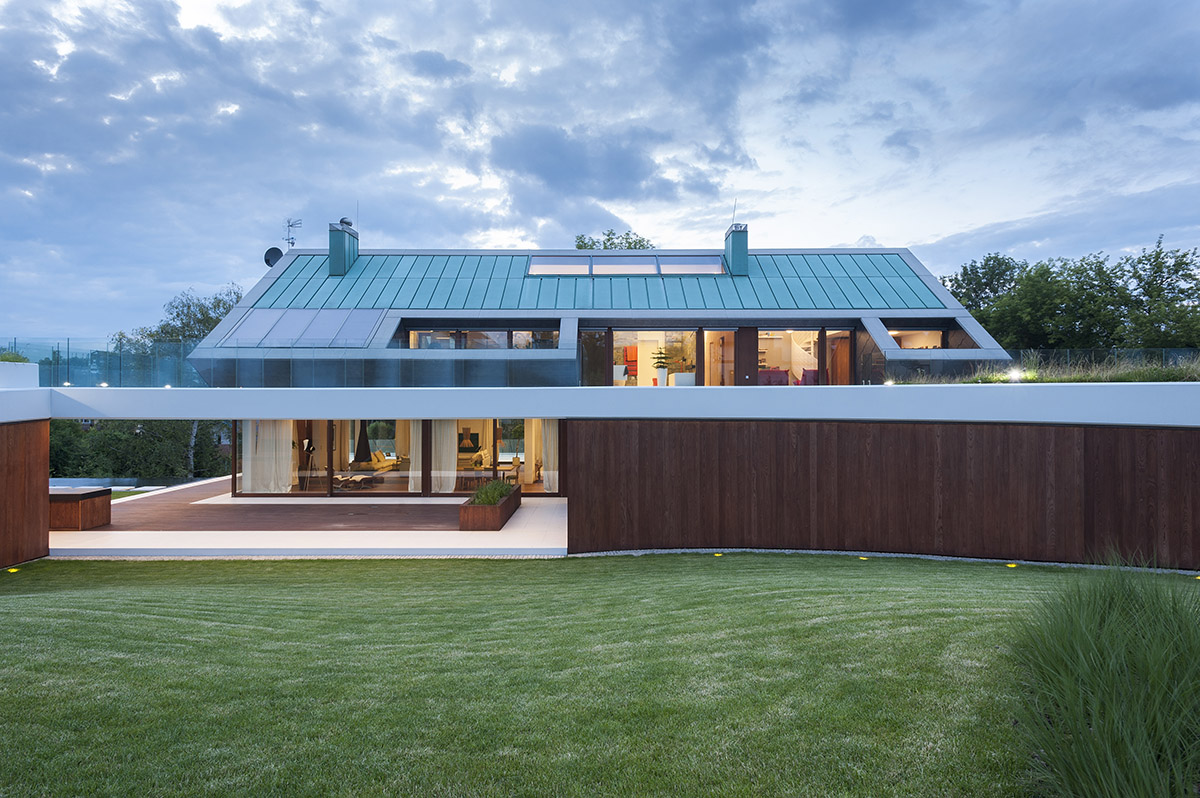 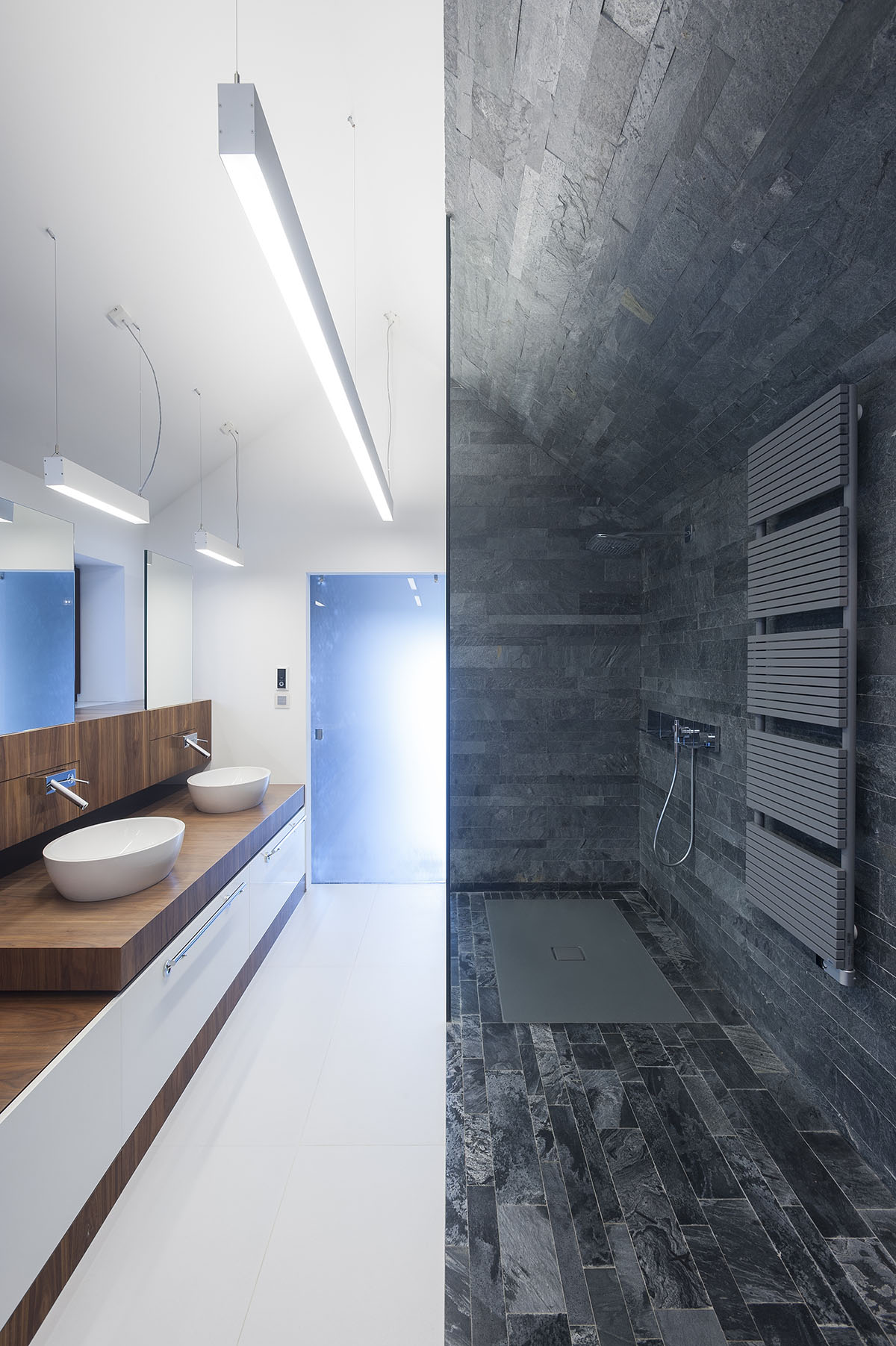 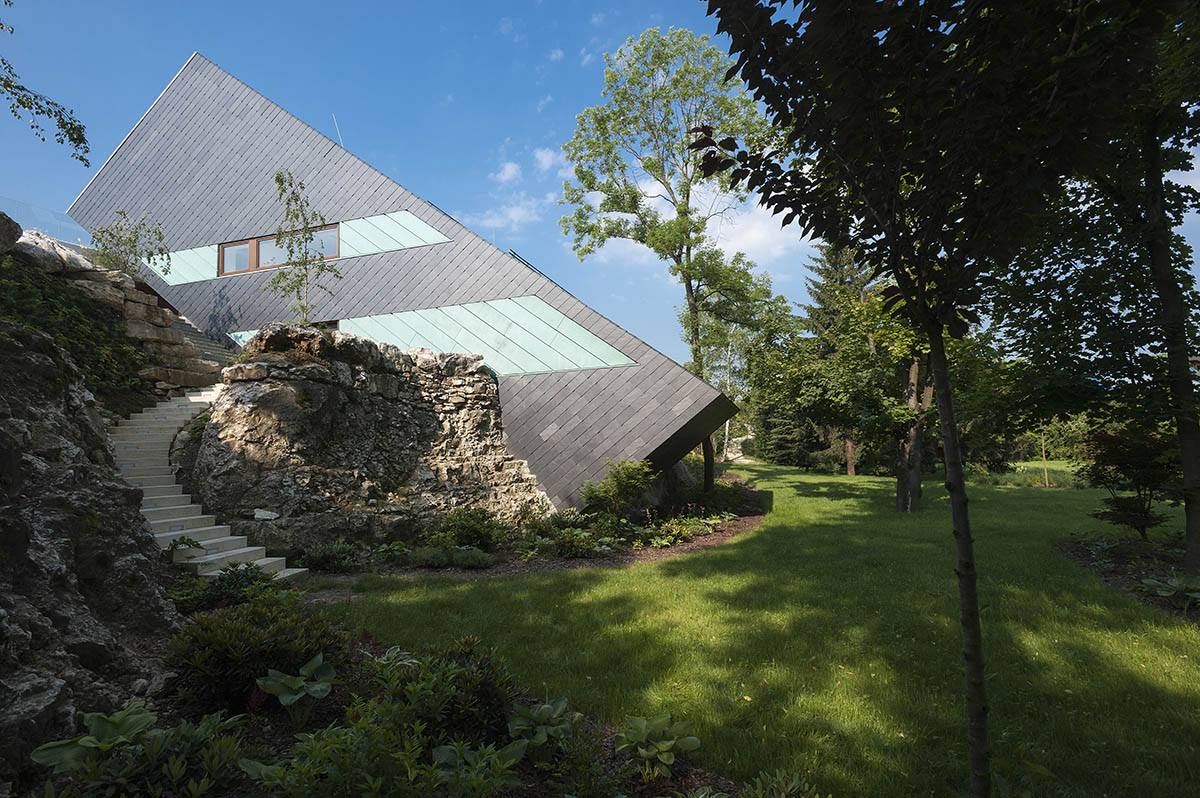 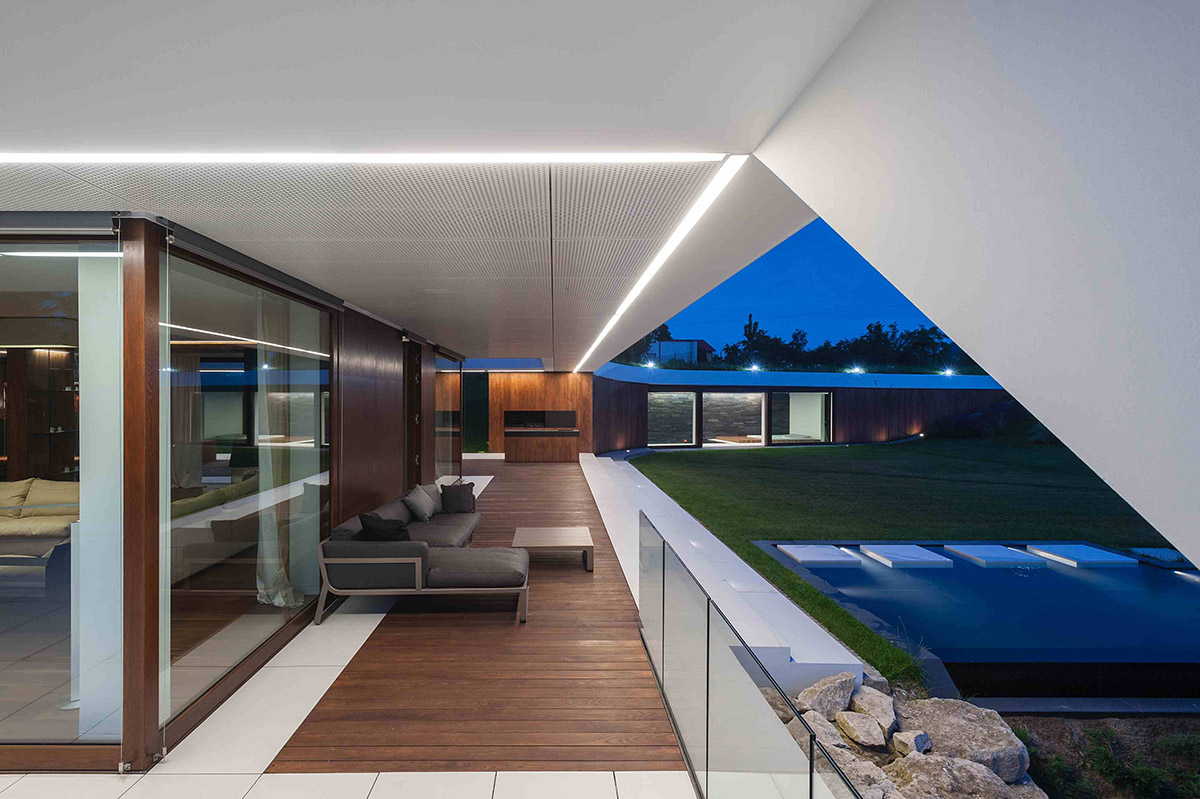 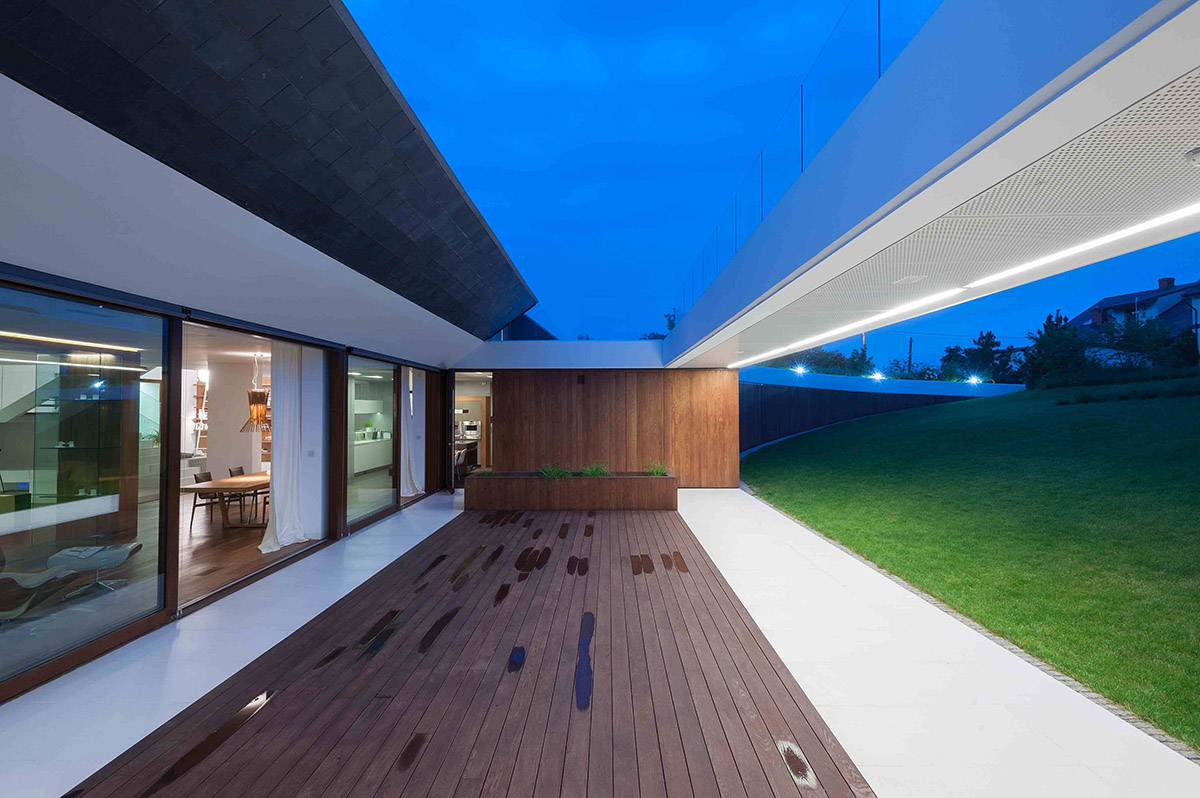 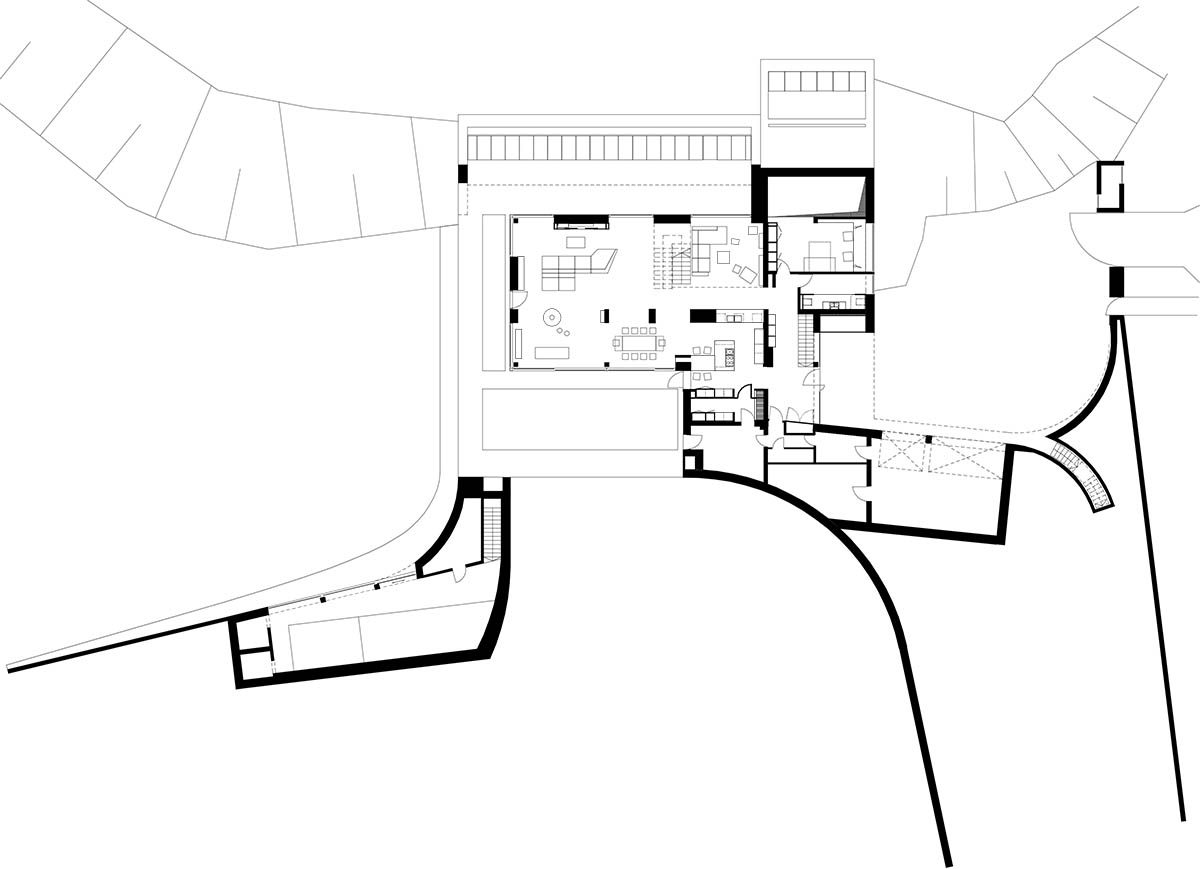 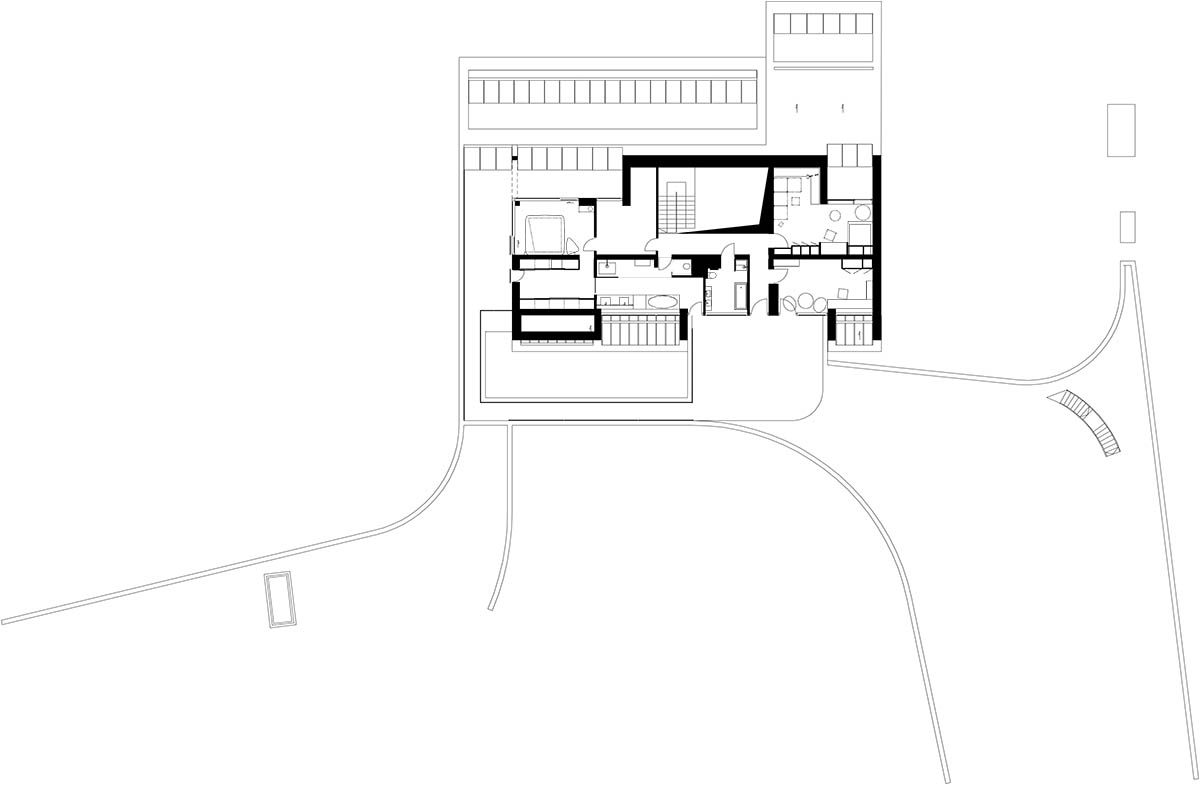