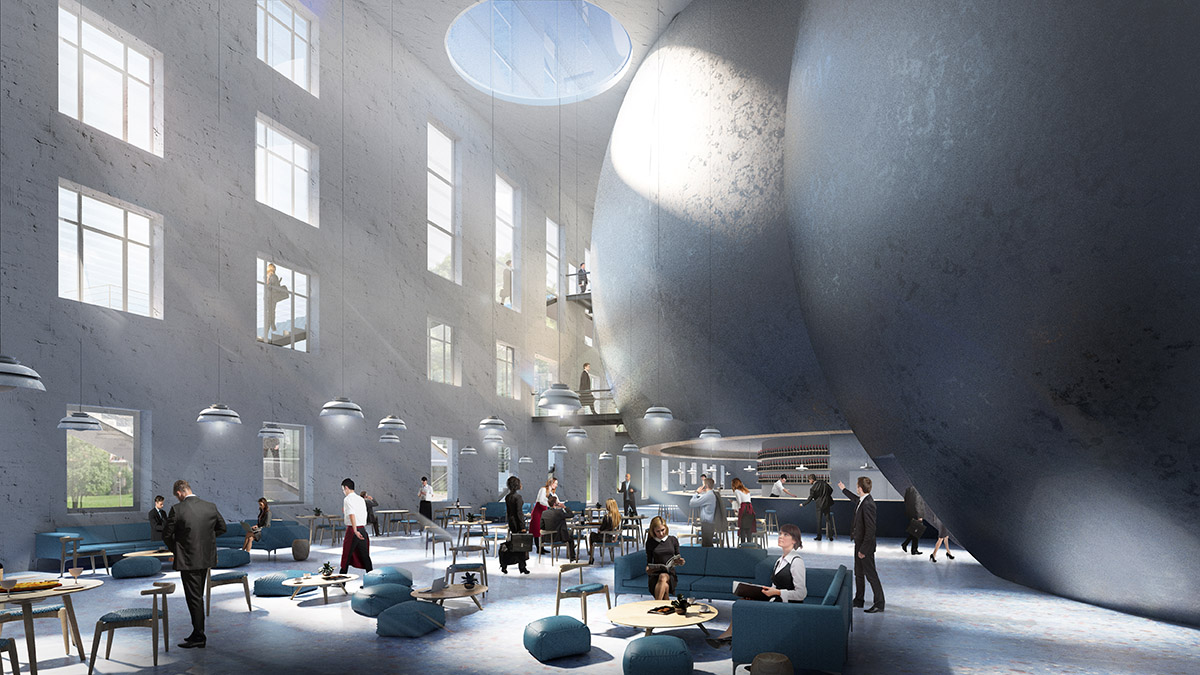 Naza Arquitectura y Diseño has released its competition proposal for the Vilnius Concert Hall, Tautos Namai International Competition, which was held in 2019. The competition was aiming to find the best architectural and planning solutions for the National Concert Hall and the surrounding area, taking into account the urban and natural conditions of the venue.

The competition asked participants to find an exceptional, outstanding, original design in terms of artistic expression and architectural concept for the National Vilnius Concert Hall in Lithuania in 2019.

The Concert Hall, located in Tauras Hill is an exceptional area known for its historical past, nature and cultural heritage. Trade Unions Palace and the northern slopes of Tauras Hill are examples of this.

The objective for building the new National Concert Hall is to create a new landmark for the city that preserves its historic importance. For this reason, it has been decided to protect the four facades of the old existing building, as part of the interior distribution and form a new external façade of translucent glass.In this way, a double skin is created in which the facilities are arranged. Complementary to the amenities, the Grand Hall is located in the footprint of the old building creating an unprecedented view. The new building will create an open and bright foyer from which the hall will be accessed, simultaneously retaining the unique character of the existing façade.

Bike lanes are adapted to the new layout included in the Project Proposals for the Refurbishment of the Territory of Tauras Hill. Indoor parking for bikes is planned to be located next to the northern façade.

The proposal keeps the new pedestrian pathways suitable for persons with reduced mobility. This is also included in the Project Proposal for the Refurbishment of the Territory of Tauras Hill. Furthermore, a lift for reduced mobility persons has been planned adapting the connection with the access floor to the building. 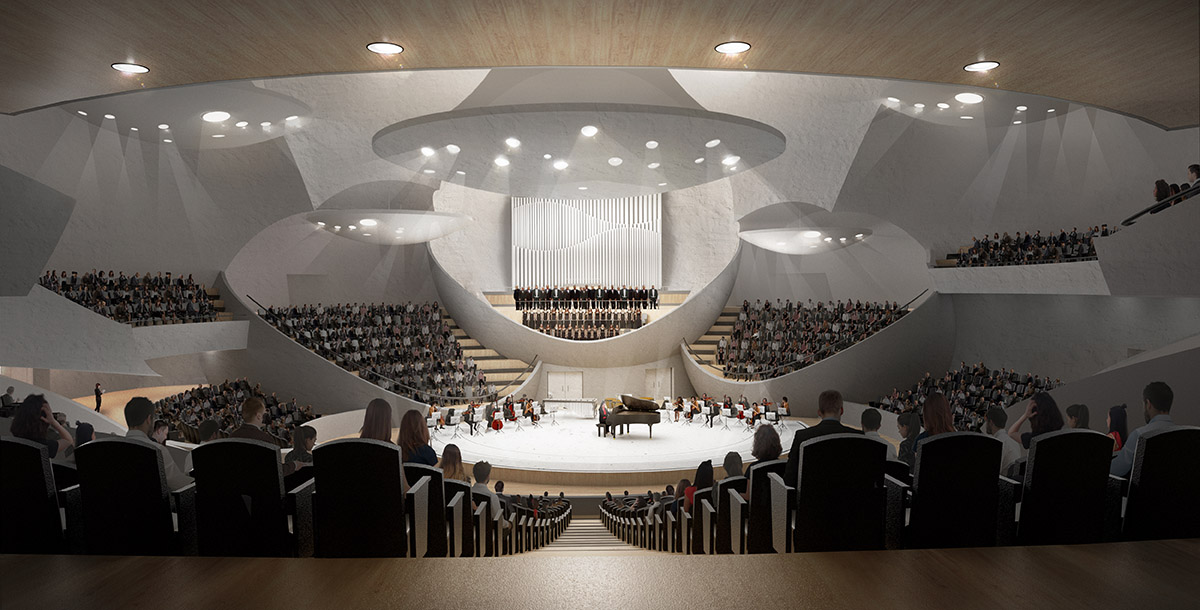 The main public transport stops have been studied to allow access to the building, prioritizing the connections due to the natural conditions of the site and the surroundings.

It is essential to provide an access road to the site which facilitates the free flow of pedestrian and vehicular traffic. For this, taxi access and user arrival to the building have been proposed, allowing only for down routes and prohibiting the parking on the west facade, so pedestrian connections to the building are not interrupted.

Goods vehicles, staff, TV trucks and artist buses are proposed to access the Concert Hall from Tauras road, by means of bur­ied roads that give access to the private parking and the loading / unloading area. This road will be one-way with the exit connecting to Mykolaičio-Putino Street, so the pedestrian paths are not in­terrupted. 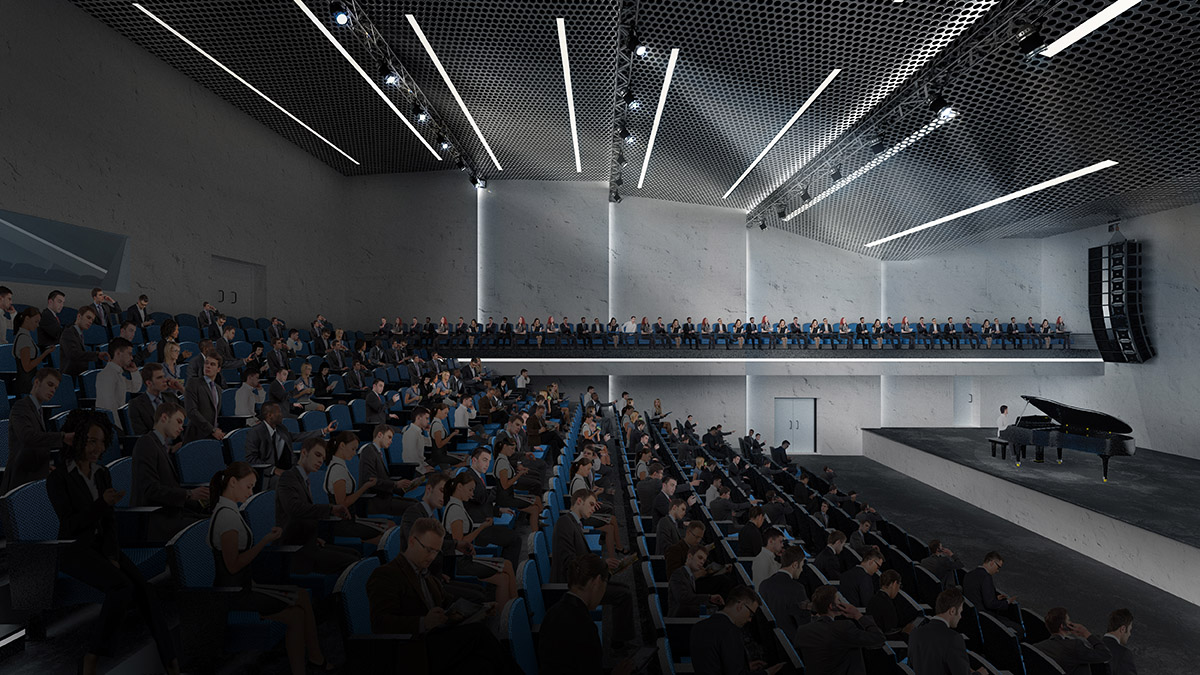 From the outside of the National Concert Hall you will not be able to see the full scale of the Great Hall until you walk through the original façade of the Trade Union Culture House. In the main hall, there is a world of detail: the straight lines of the old façade contrast with the spherical shapes of the main hall. These shapes are covered in reflective metallic sheeting. In the foyer, a fantasy world of reflections will be created.

The configuration of the Great Hall is vineyard style. A total of 9 spheres form the entire room at various heights and sizes. 1812 seats are configured around a central point. The intersection of the spheres, covered in white wood in the interior, contrast with materials and warm colours on the floor and the armchairs. 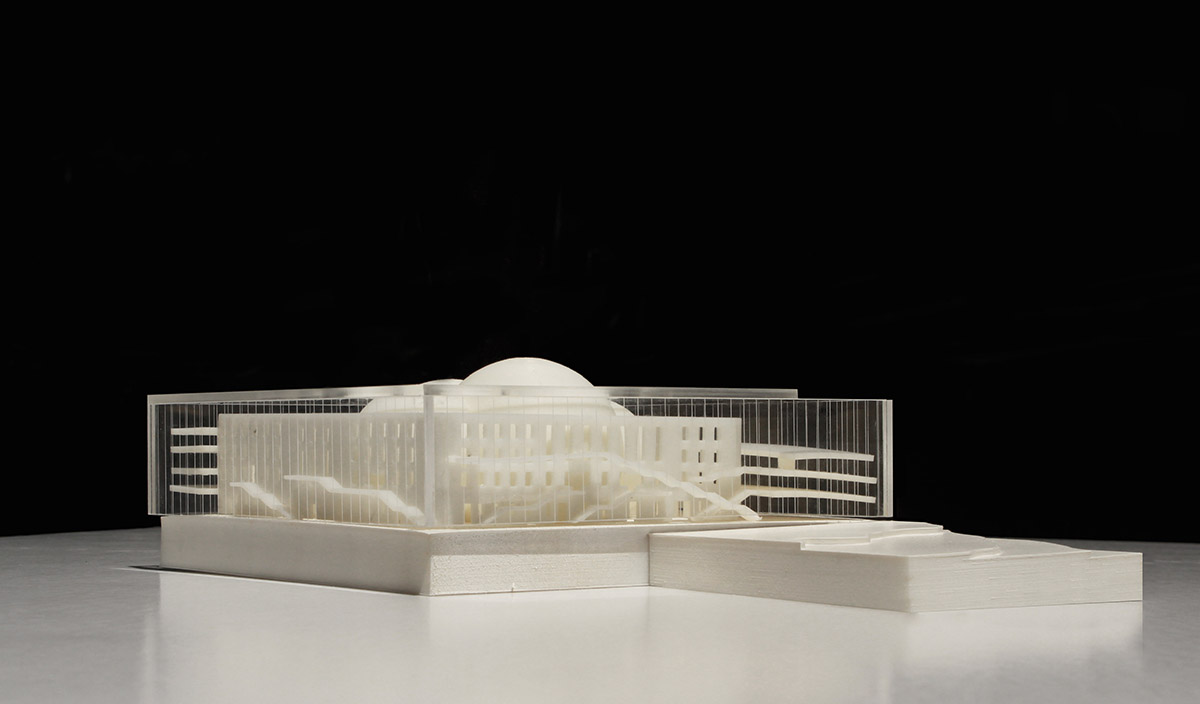 The managment area is located in the upper floor of the new building and inside the ancillary functions block, in order to achive the necessary privacy. It´s connected to the parking with some lifts situated in the groundfloor.

The rehearsal rooms are placed in the ancillary functions block, close to the main and small hall, and they are comunicated directly with the loading bay by lifts for people and instruments. They are separeted by the foyer, the old wall and a corridor to control the sound. They are divided in two differents levels.

The strategic position of the small hall, situated close to the main entrance but separeted of the main hall foyer, allows distributing the users in the building.  However, it is connected with the ancillary functions block and with the underground level by a service lift. 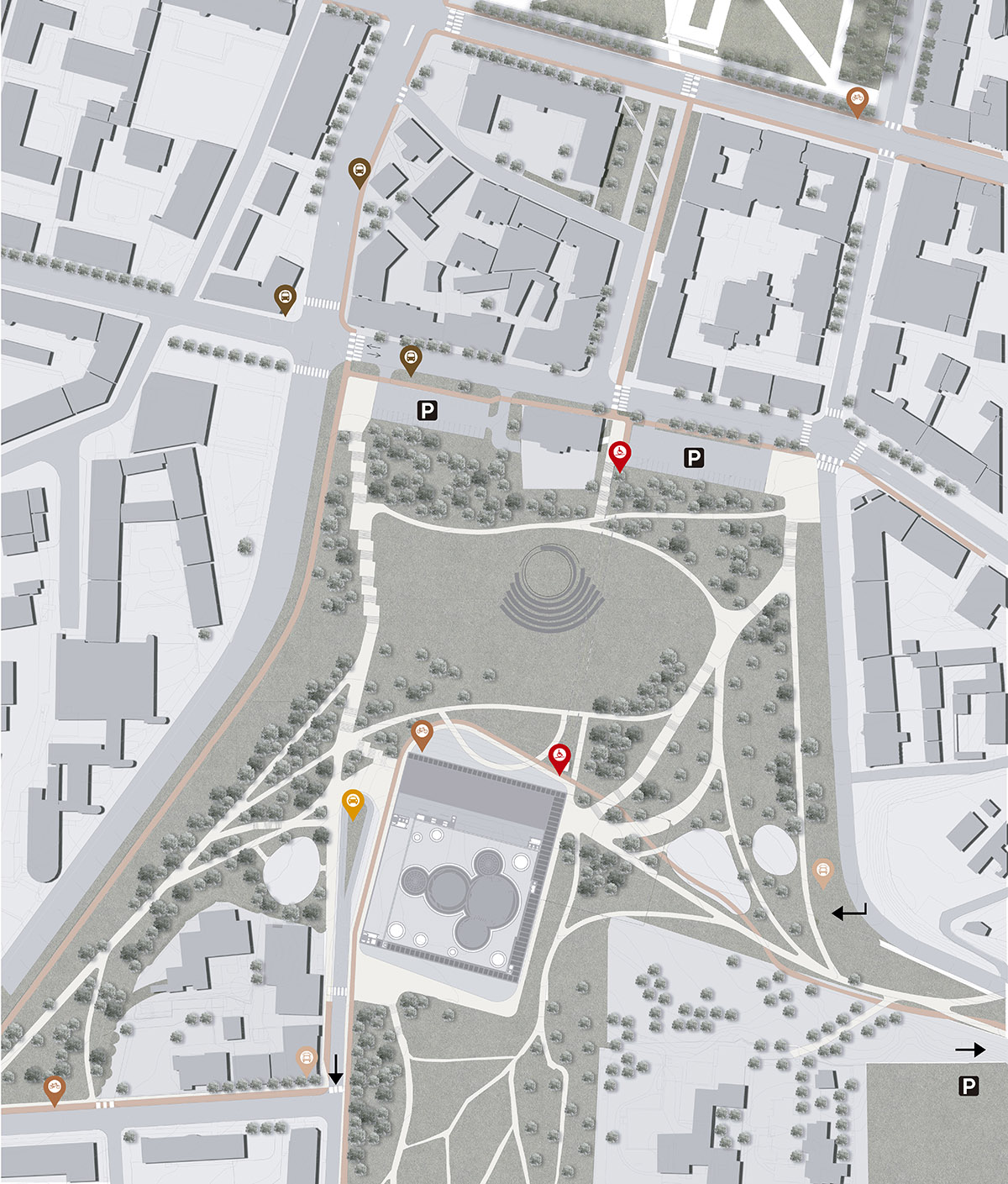 The public functions block is divided in three differents levels. In the groundfloor level the service programme for the main and small hall are situated and in the first floor the exibition and commercial space are located.

The restaurant and its auxiliary programmes are located in the upper level of the public functions block and they are communicated directly with the entrance. It has access to the outside terrace on the roof of the building.

The main priority has been the creation of a Concert Hall, which manifests itself at first instance in the form of challenging concave geometries, that achieves the highest possible acoustic performance. Duringthedesignprocess, a refinement of shape and layout of the hall has been undertaken by focusing on lateral efficiency, reverberation time but especially the prevention of the focusing effect (echoes) associated with spherical geometry.

Within the hall, intricate finishes have been used to model the sound by specifically aligned deflecting surfaces, semi-hidden behind spaced wooden slats that break the spherical shapes acoustically, creating strong reflections from many directions and subsequently preventing echoes. Furthermore, balcony fronts have been placed in a way that takes advantage of spherical convex shapes, increasing diffusion through the hall and blending sound quality and pushing the boundaries of the live concert experience.

The location of the choir is being placed behind the orchestra. This space often could be used for choirs and additional performers as well as for audiences. Location of the choir has been chosen so the sound emanating from here is naturally amplified to the audience.

Semi-hidden deflecting surfaces create the diffusion needed to increase the uniformity of sound distribution and ensure that the decay of sound in the hall takes place without excessive fluctuations due to the concave inner shape of the spheres. These deflecting shapes are hidden behind spaced (50%) wooden slats so that smooth concave sphere shapes are preserved from the audience´s view. 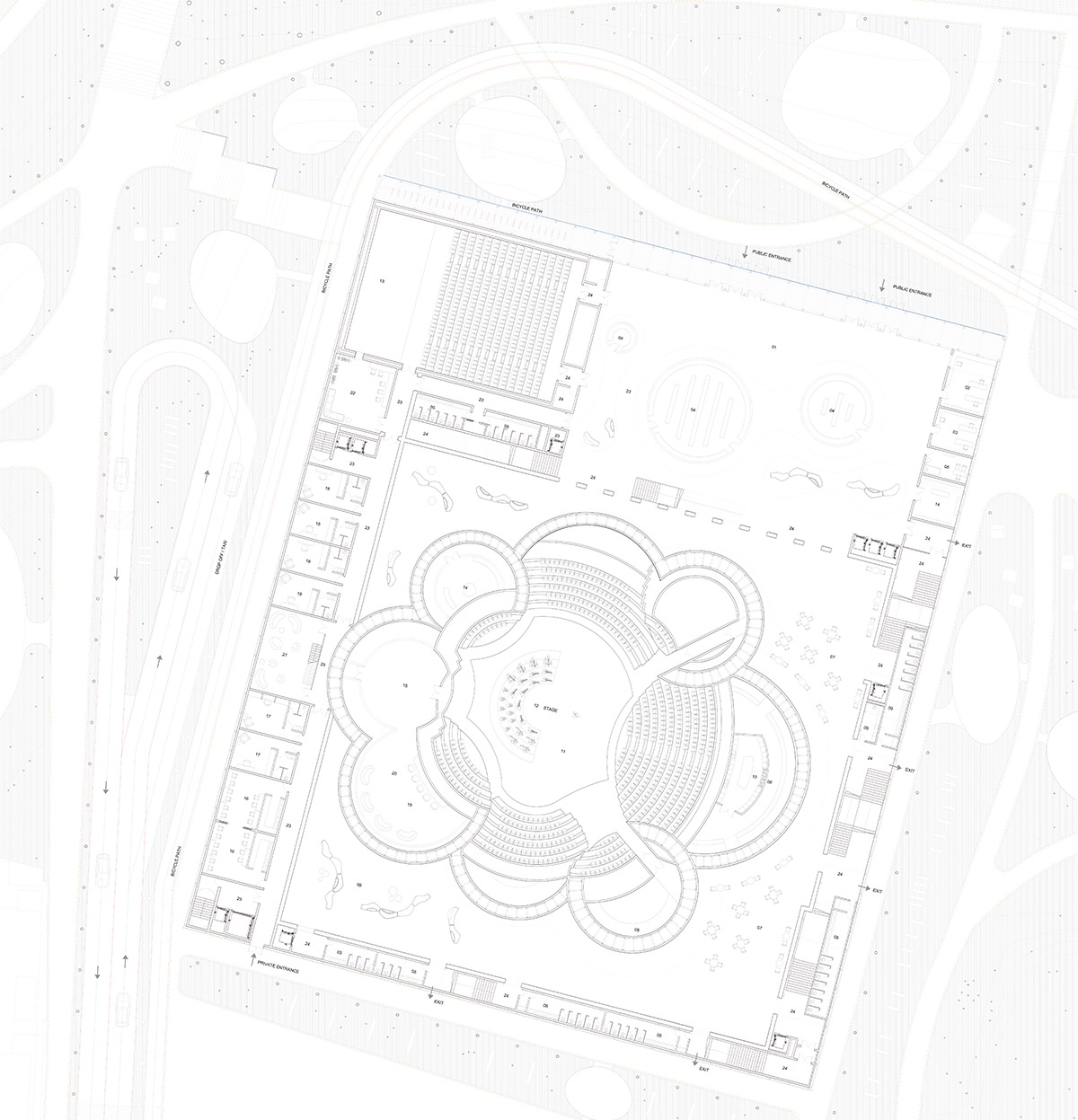 Numerical simulation by using CATT-Acoustic software has helped to contribute significantly to the interior acoustic characteristics of the Grand Concert Hall. High acoustically-absorptive seats will be installed to equal the equivalent occupied audience absorption. This will ensure acoustic conditions are maintained in the event of partial occupancy. Acoustic curtains have also been installed on motorized curtain tracks along the side walls of the concert hall, in the additional coupled sphere volumes.

They can be entirely hidden in curtain boxes located on five corners of the hall. When deployed, these curtains allow for a lower reverberation time for amplified events and brass band concerts. A vertically foldable rehearsal curtain around the balcony fronts at stage level has also be installed in a curtain box integrated. When deployed during rehearsals, it is also used to simulate the acoustic absorption of a full audience. Reverberation time in rehearsing rooms are within a range of 0.4 to 0.7seconds for Classical Music and 0.2 to 0.3 seconds for amplified music. Suitable reverberation times have been achieved by placing absorbent interior finishes in the walls and ceilings. 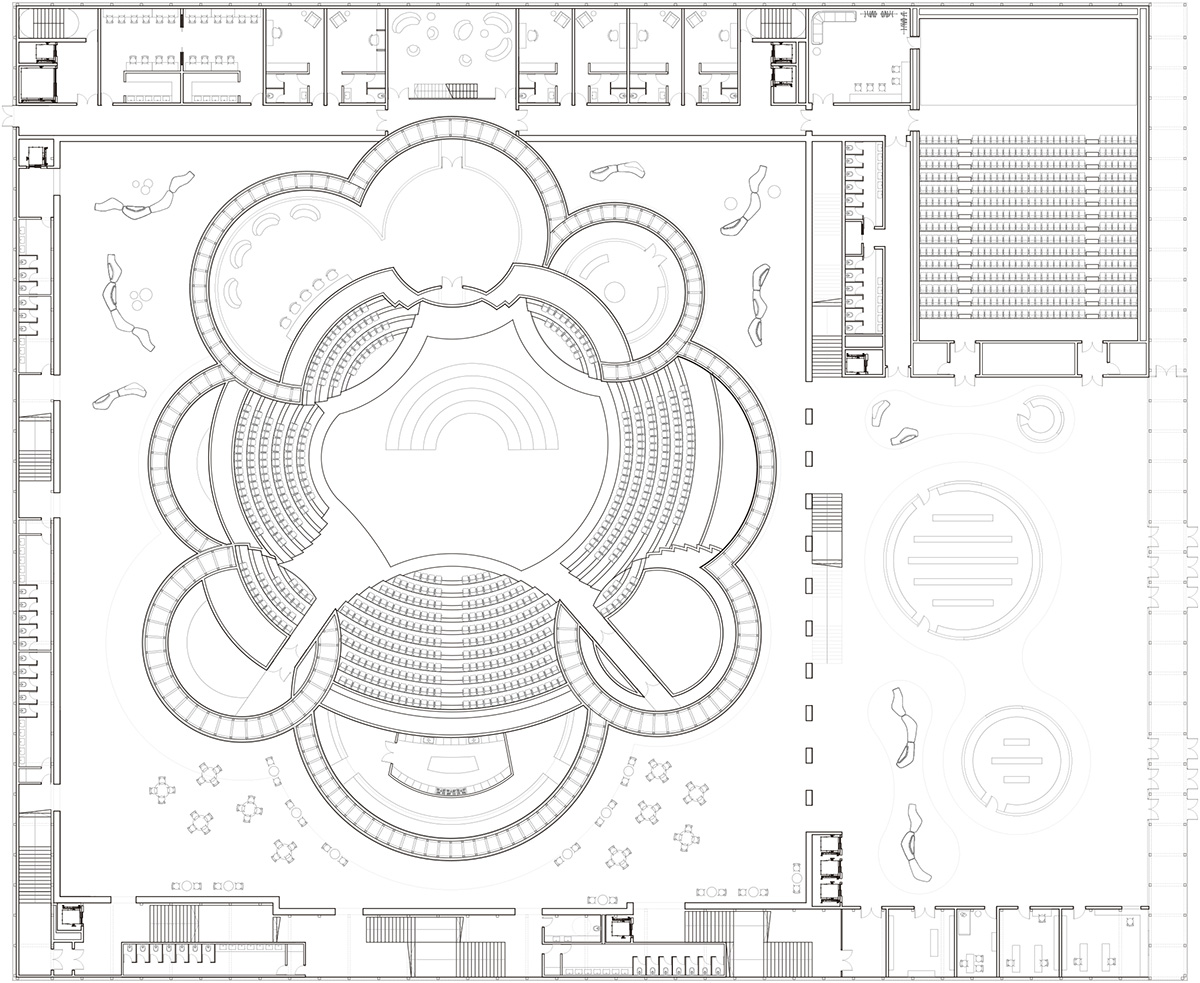 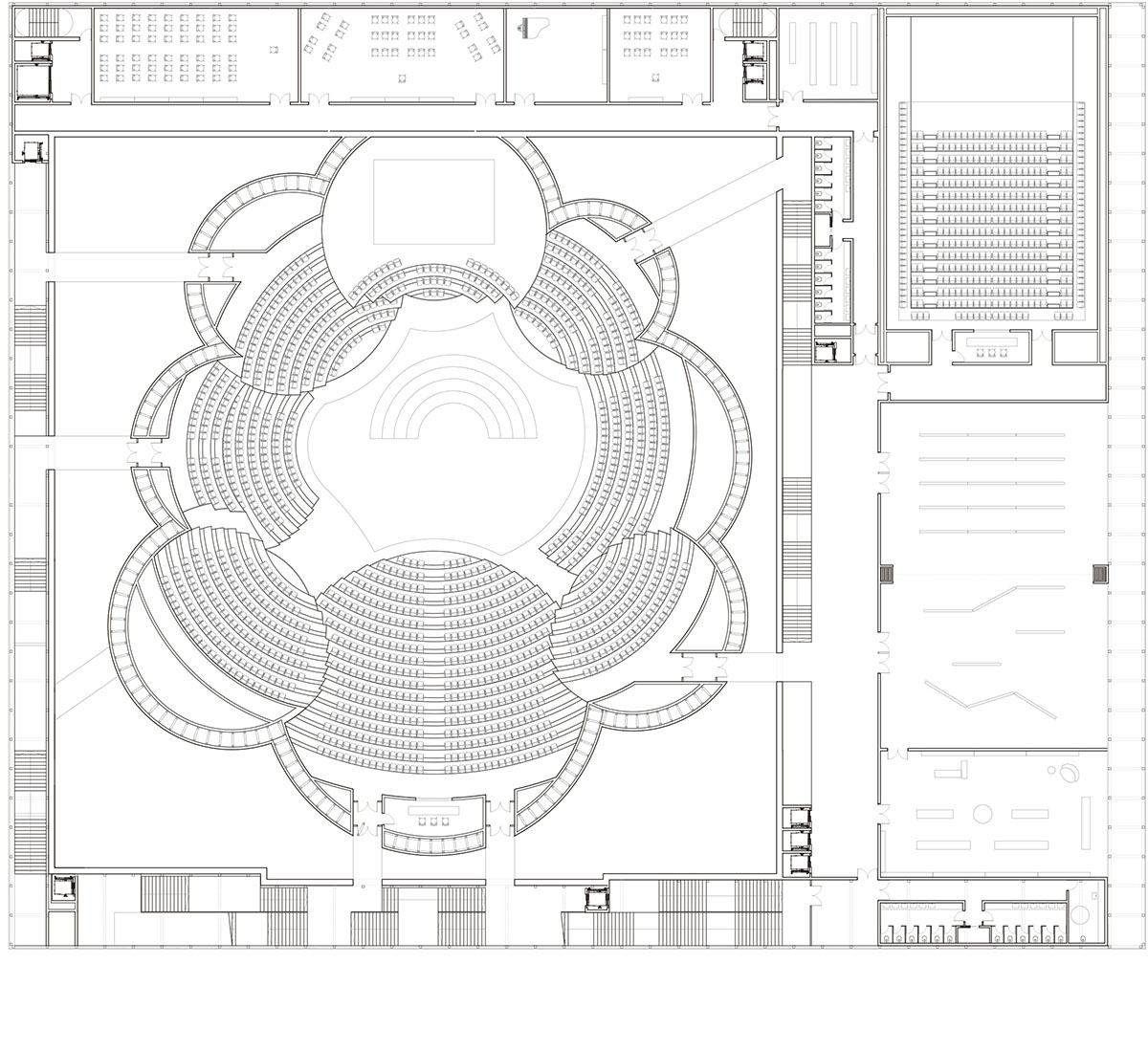 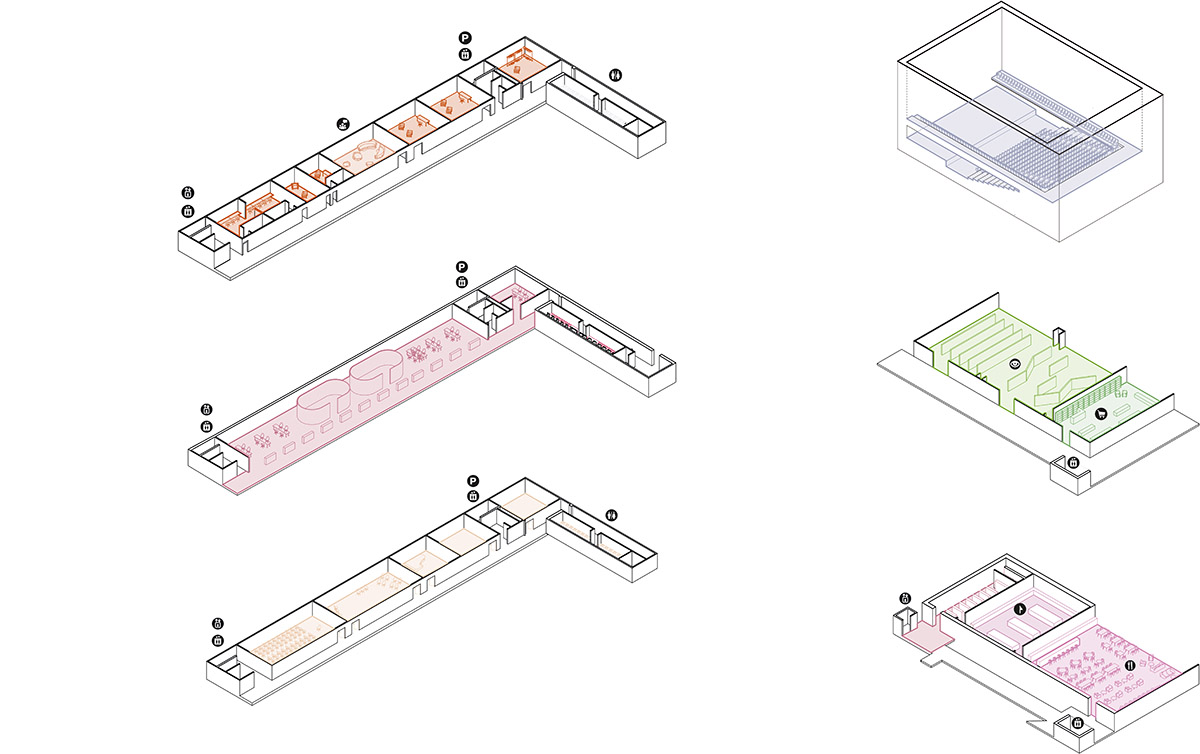 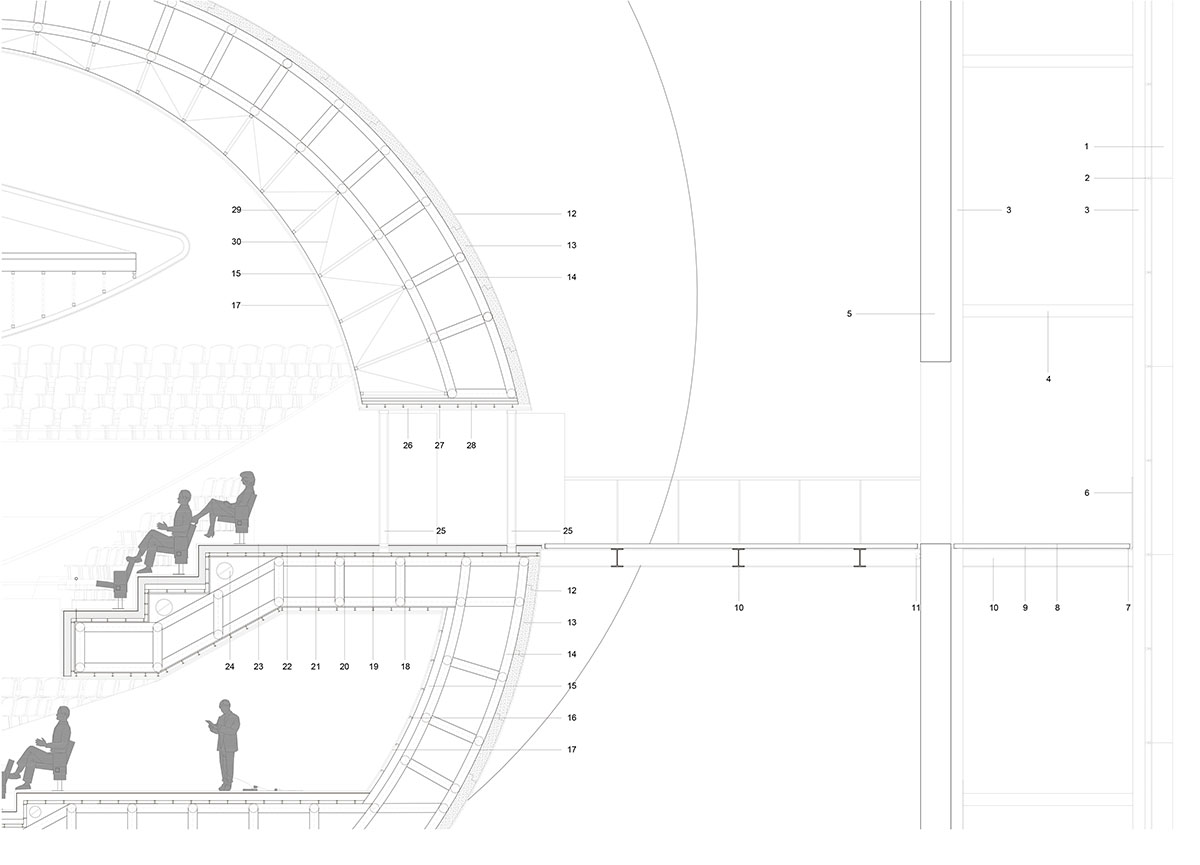 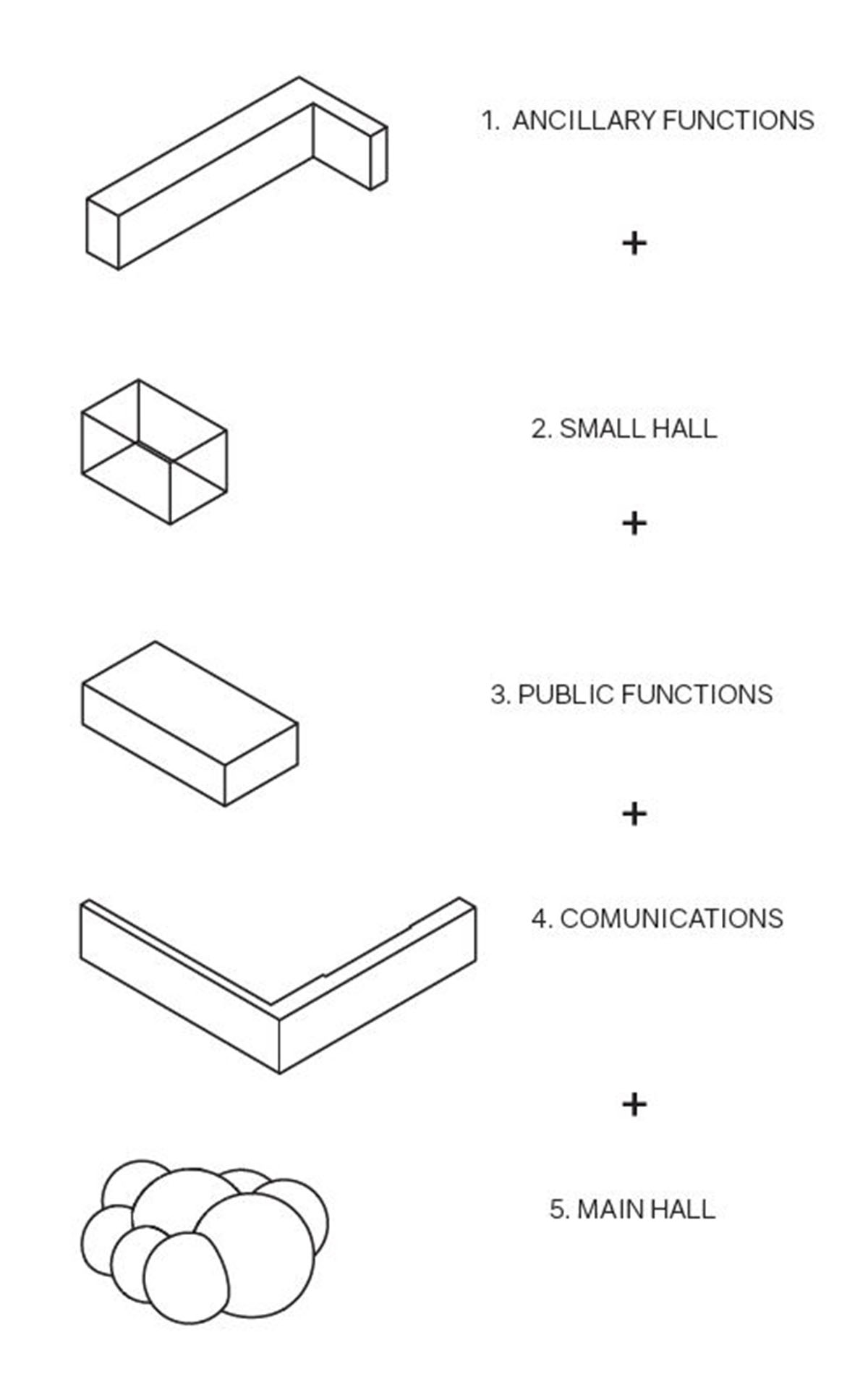