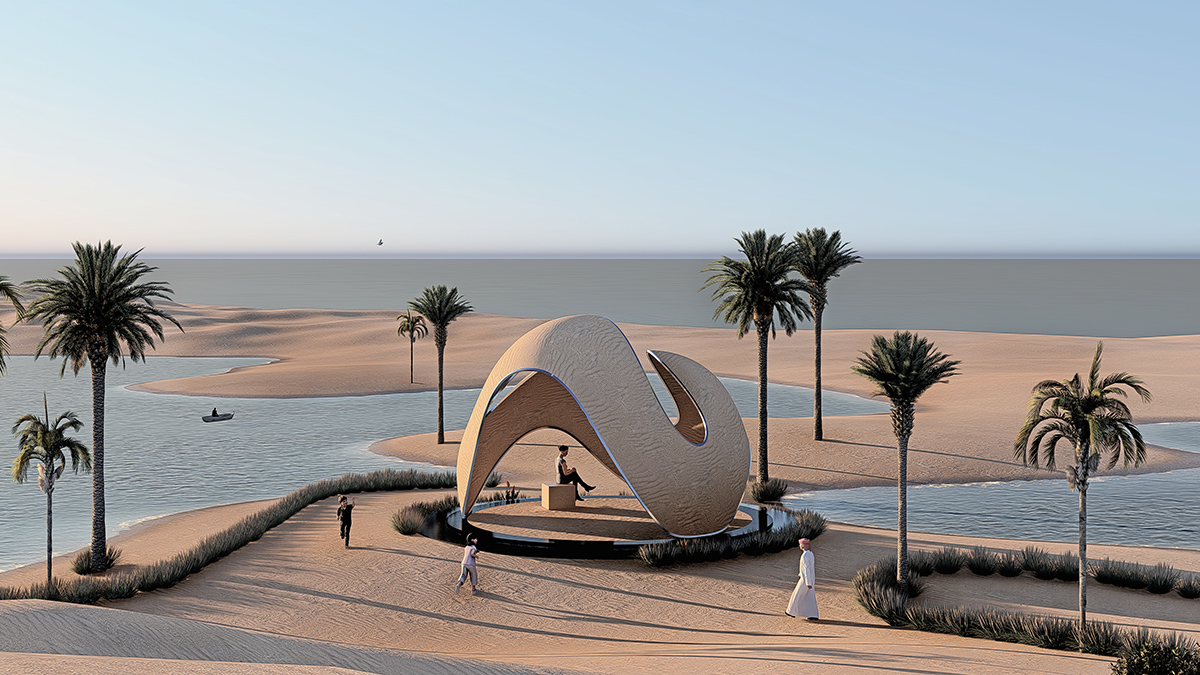 In recent years, there has been a significant shift in construction methods. Many research establishments are investigating the application of 3D printing technology in construction and they have reached spectacular advances in the field. Although these technologies might not be widely available in developing countries, there has been notable enthusiasm among architects and local authorities for realizing 3D printed buildings in Iran. Darak Village, a spectacular tourist destination near Chabahar in the province of Sistan and Baluchestan, is one of the pioneers to realize a small scale 3D printed building for people by A Architects Office. The lead architects, Amir Armani Asl and Kiana Ghader, provided the following description of the project, which is named "Sandy", and the concepts behind it: 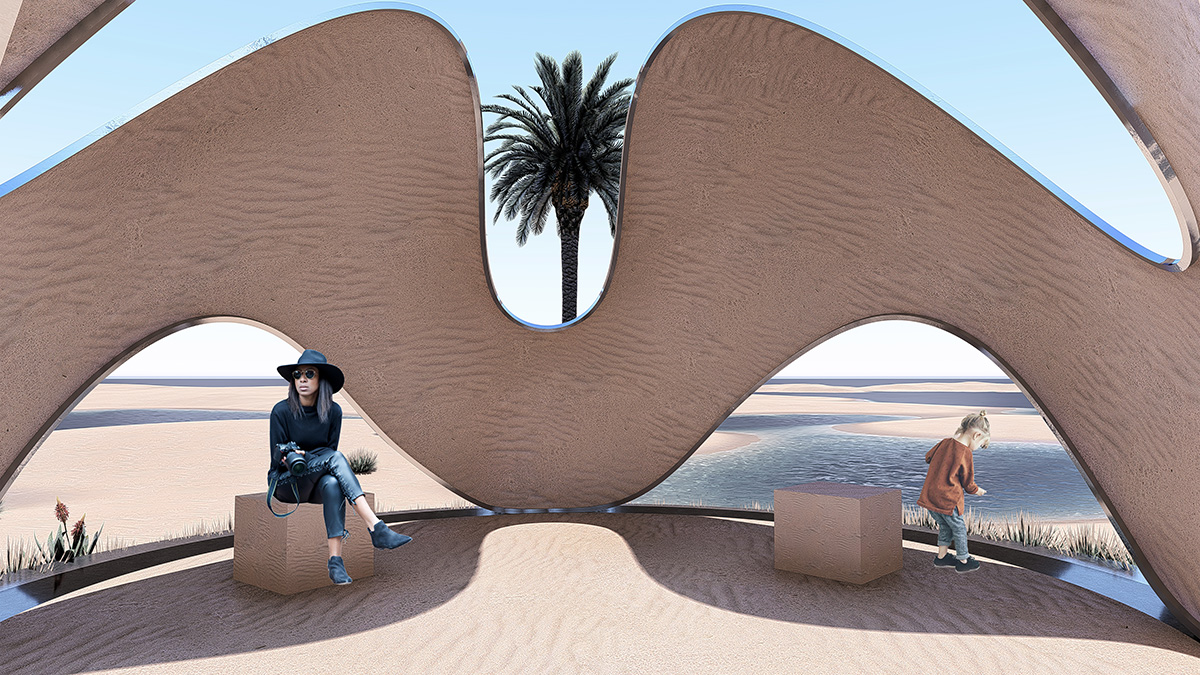 Relevant organizations, which aimed to promote social activities of the area among residents and tourists who visit the southern regions of Iran every year, invited a number of architectural offices in a limited call for designing a social space and an architectural element. A Architects Office's design proposal was selected as the preferred design. The project is presented based on scientific research and manufacturing techniques using advanced digital tools and techniques.

The project is a reflection of the architecture and technology of construction based on the knowledge and identity of the native architecture of those areas near Chabahar so that visitors and tourists who visit the southern regions of Iran each year are impressed by the progress and quality of social spaces. The research team of the office, who considered the employer's requirements and provided practical and forward-looking suggestions to increase the knowledge and level of the international presence of the region, recommended building an interactive and social pavilion based on the history of the native architecture and culture of residents. 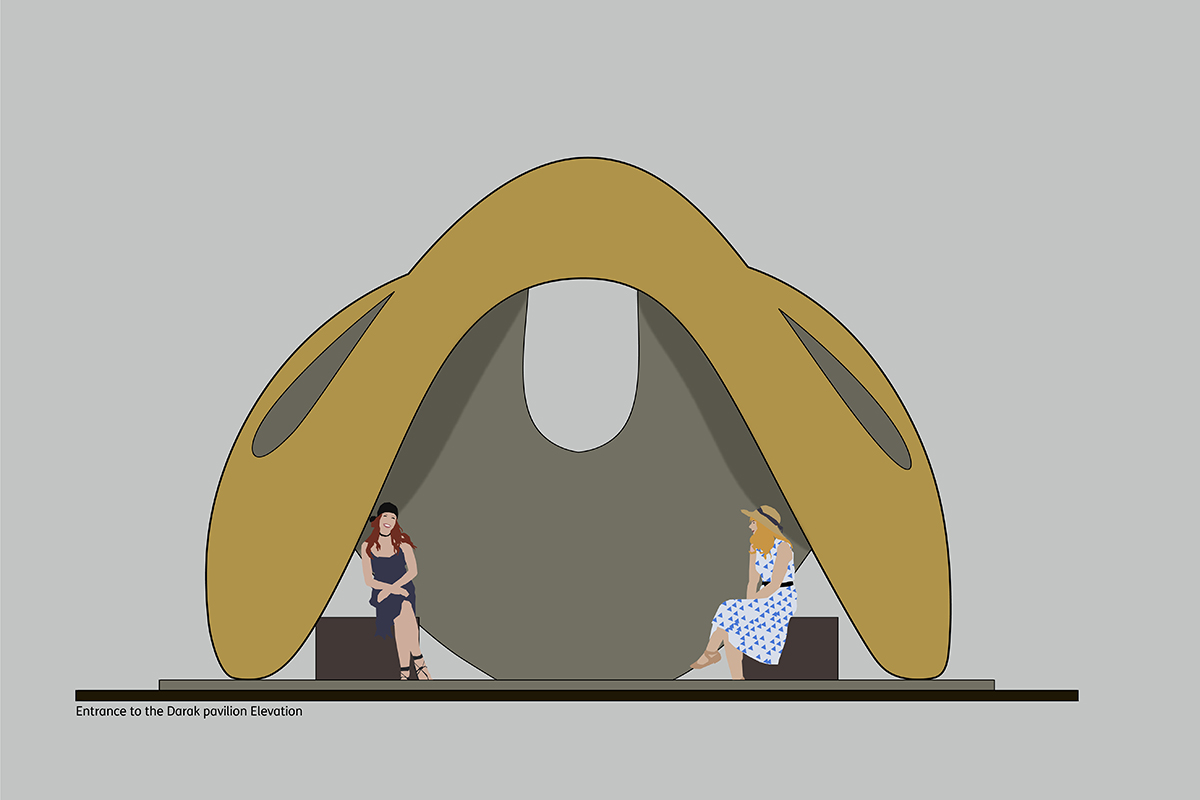 The proposal focused on ensuring that no interference or destruction is brought to the designed environment since modern architecture has taken on the role of destructiveness rather than protection. At the same time, the project has been designed to build on the project's strengths and highlight the topology, morphology, form, and native material of the project which is located between a sandy beach and desert. This will make visitors feel the close connection between architecture and nature. The project also aims to connect closely with the past architecture of the region while also looks at the future and the role it plays in advancing design and construction in the area.

Finally, A Architects Office submitted a proposal to review the cost of construction, innovative construction techniques, visual appeal in day and night, aligning the design with past architectural identity and a realistic look at the future, creating a variety of visitor visibility and designing the role of linkage between the social and cultural atmosphere were taken into consideration. Construction has been scheduled for 2021 according to the suggested timeline, needs, and required team of experts. 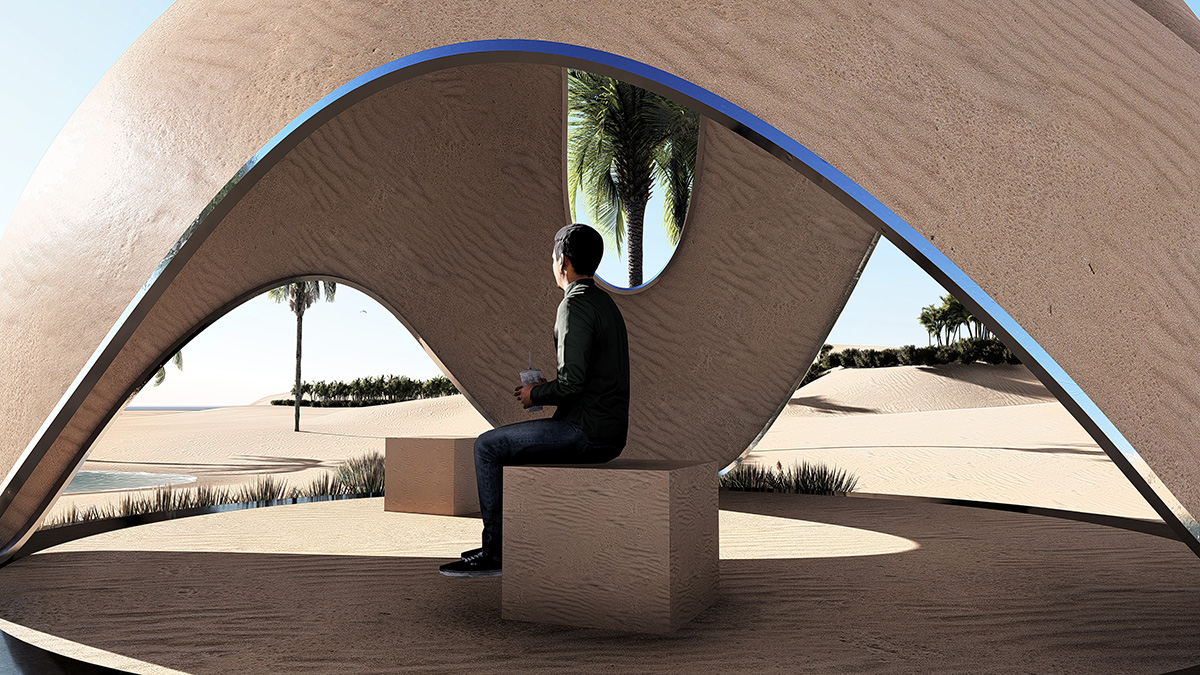 This space is intended to be a pavilion for resting and community gatherings of both villagers and tourists. The village of Darak is 170 kilometers far from Chabahar. As you travel through this area of Iran, you reach a point where the sea surrounds the sand dunes of the desert, which has attracted visitors from all over the world. The topography of sand dunes in these areas adds spectacular attractions to this area. given this amazing sandy desert, our best design option is to be inspired by nature. 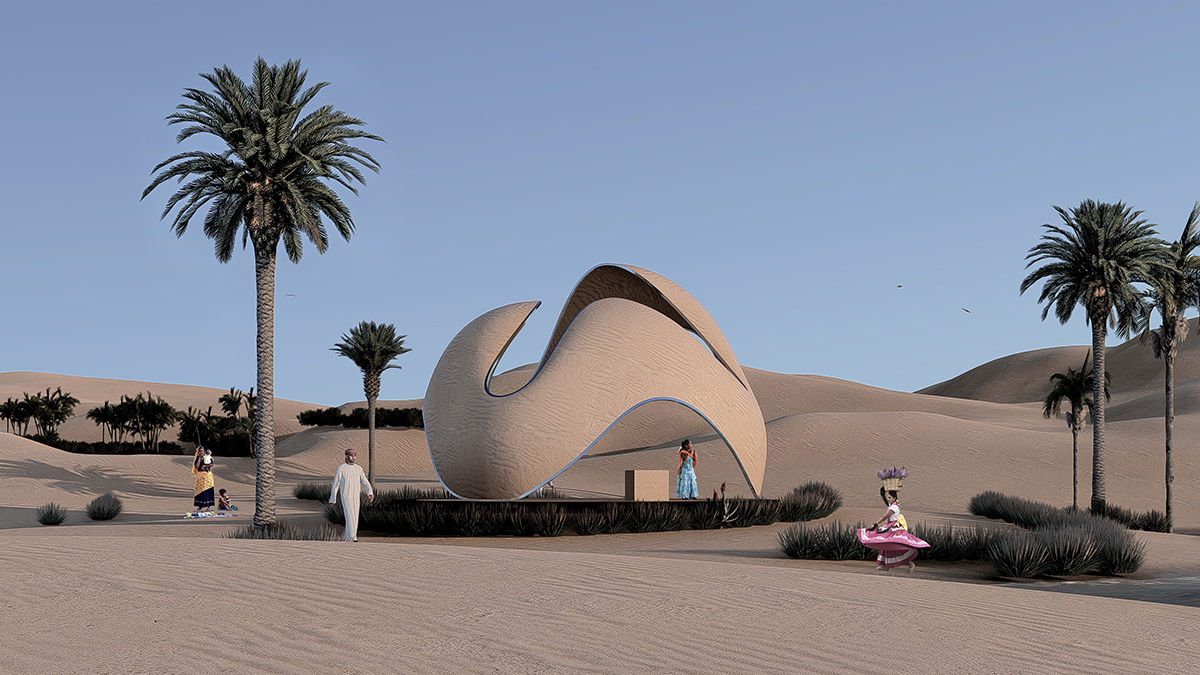 "We designed this Project considering the traditional architecture of the region, which is affected by the abundant sunlight and high temperatures during the day. Furthermore, we were inspired by the curvature and fluidity of sand dunes in addition to the traditional construction methods of the fictile embowed houses," said the team.

"Our design team has utilized an innovative construction method by using 3D printing, which can use endemic materials, such as clay and sand, with a layer-by-layer method and create the form without any harm or disruption to the environment and the natural surrounding. We integrated the design of a dome-shaped shell with vaulted openings for stability. The plan with dimensions of 18 by 18 square meters (including the perimeter of the design) is designed in a circular platform, which is 10m high, for stability and strength." 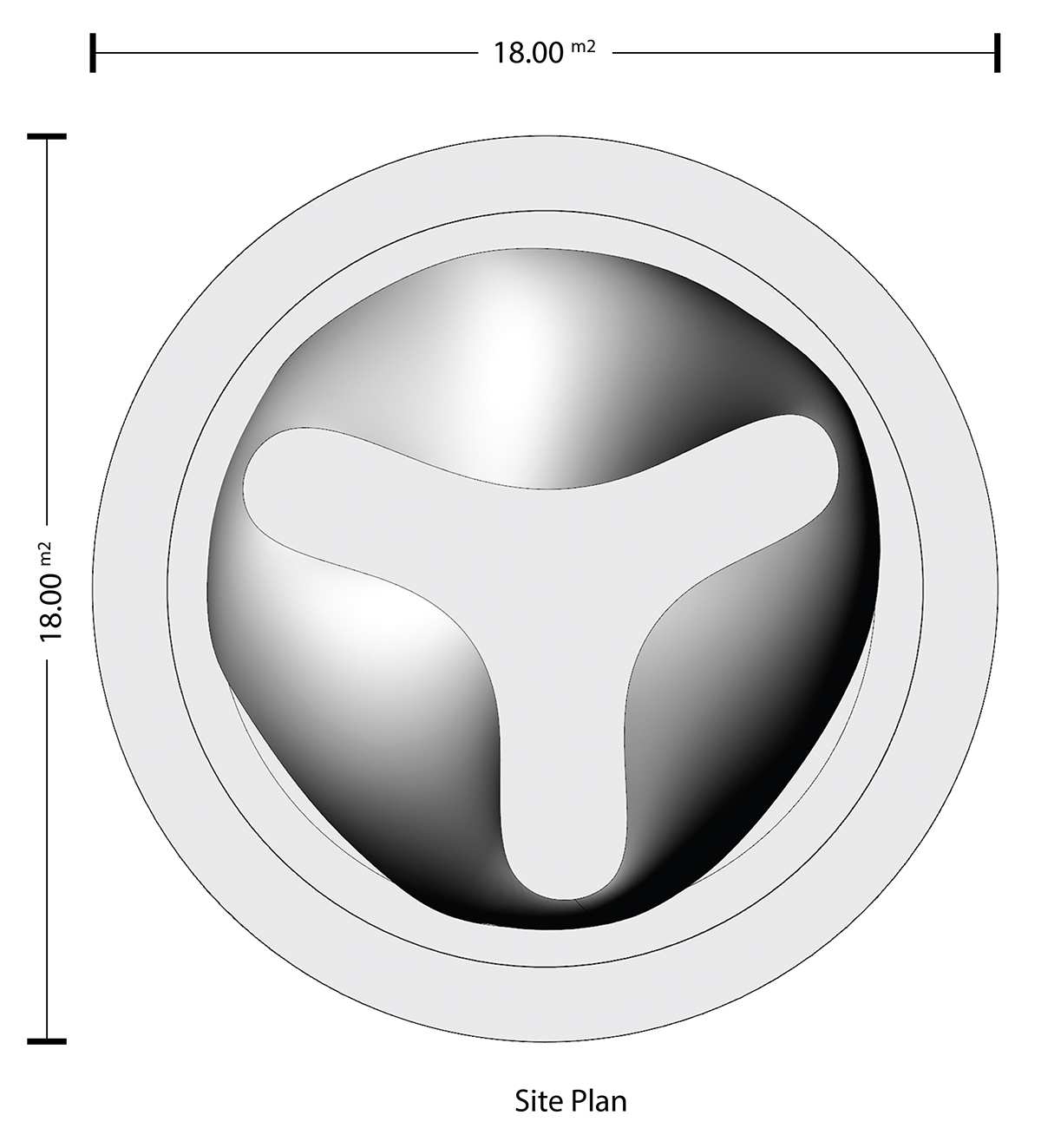 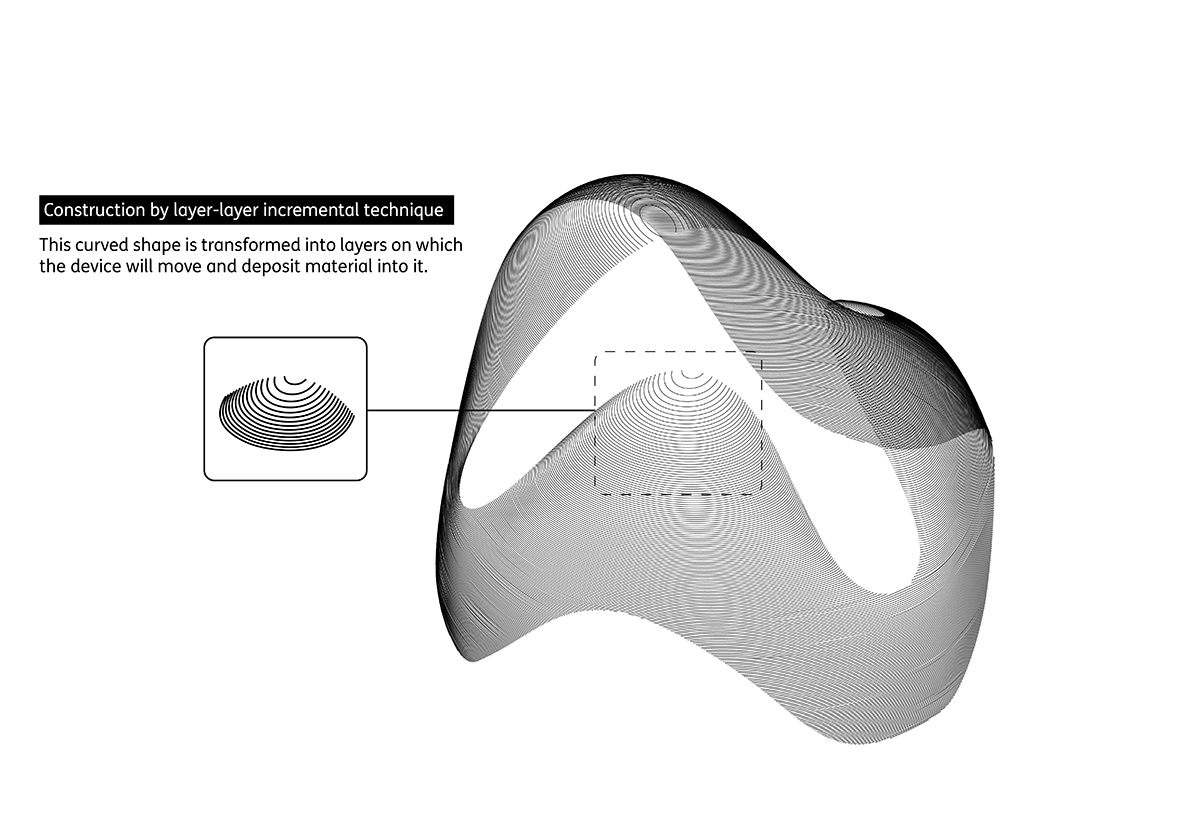 This curved shape is transformed into layers on which the device will move and deposit material into it; bringing robotics to the construction site to manufacture the future. Through combining technological advances in robotics (cable robot and drones), natural materials, and CAD/CAM software, the aim of the project, which will be presented at Construmat 2021 In the village of Darak, is to bring automation to the construction site and allow the production of high-performance buildings and their monitoring in real-time during the construction. 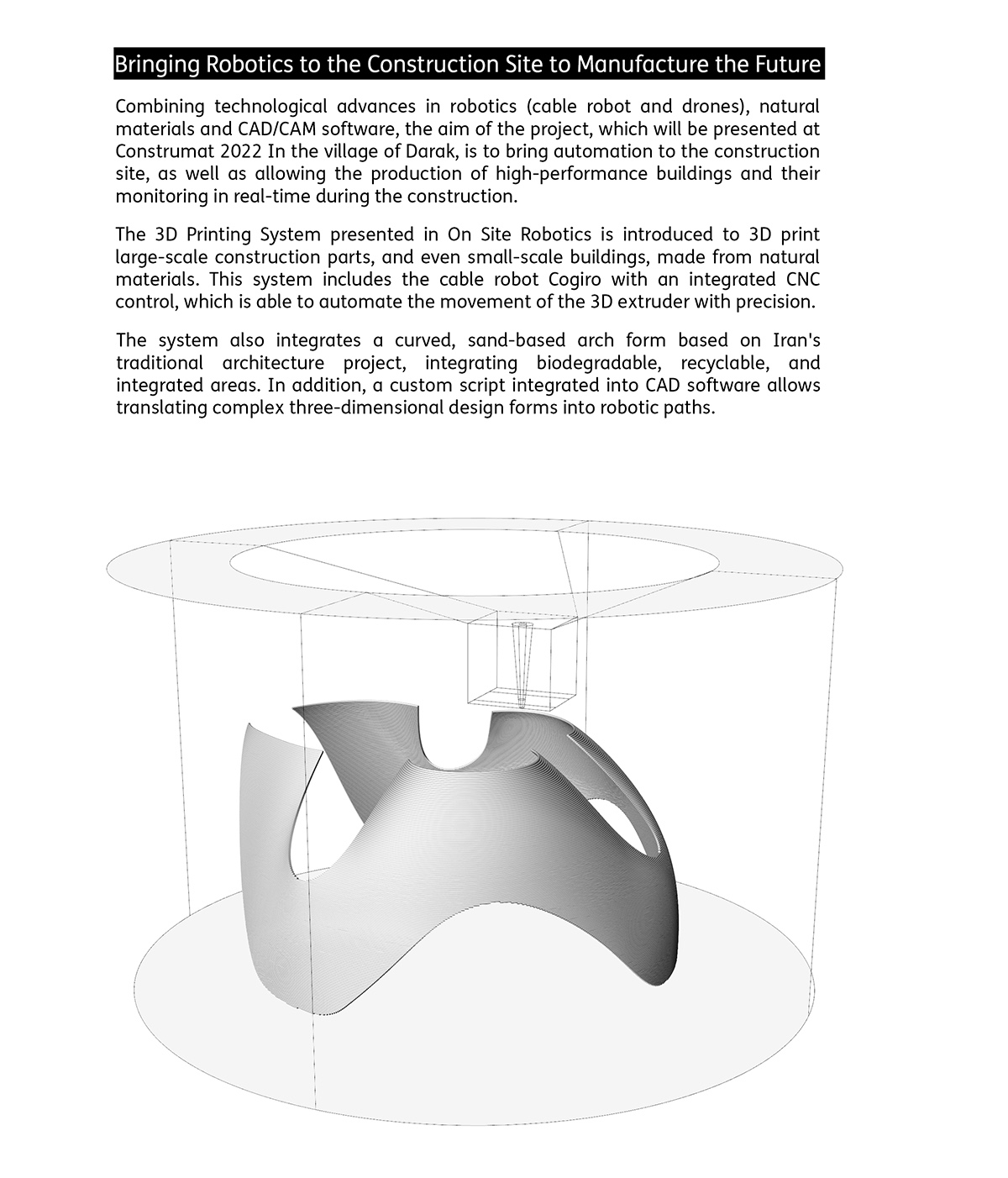 The 3D Printing System presented in On-Site Robotics is used in 3D printed large-scale construction projects and even small-scale buildings that were made from natural materials. This system includes the cable robot Cogiro with an integrated CNC control which is able to automate the movement of the 3D extruder with precision. 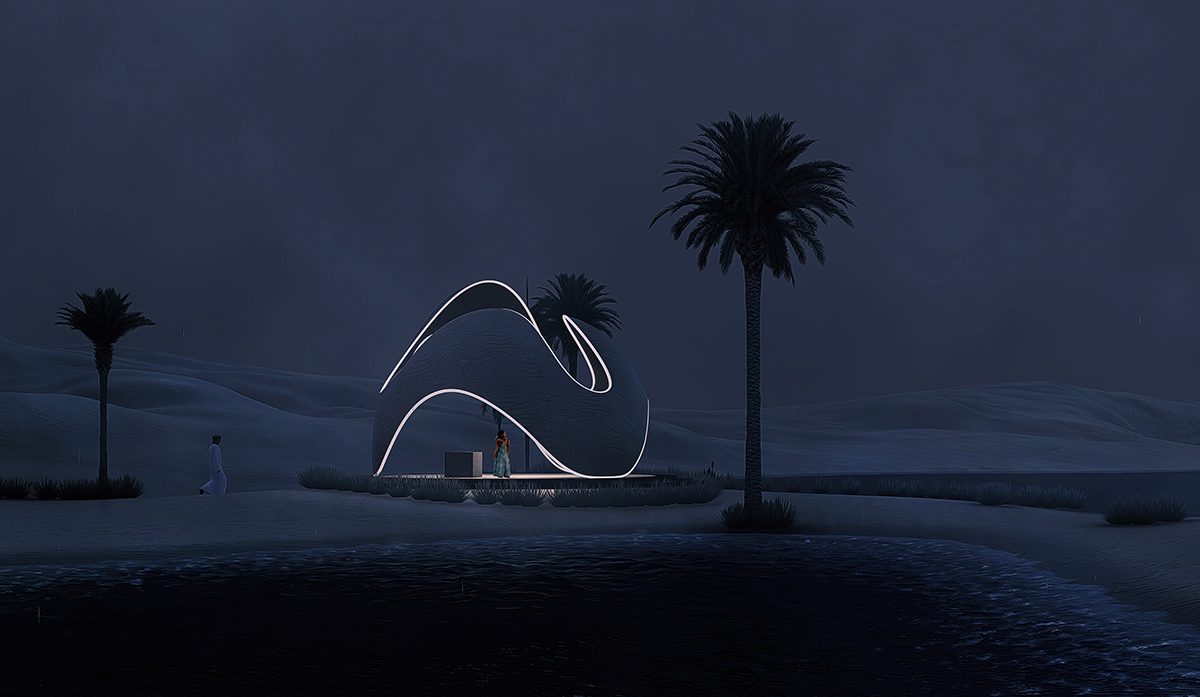 In addition, a custom script is integrated into CAD software that allows translating complex three-dimensional design forms into robotic paths. The project focuses on the behavior of the soil for 3D printing when mixed with other ingredients (such as sand) for a better understanding of the material and potential composites.

All images © A Architects Office

> via A Architects Office