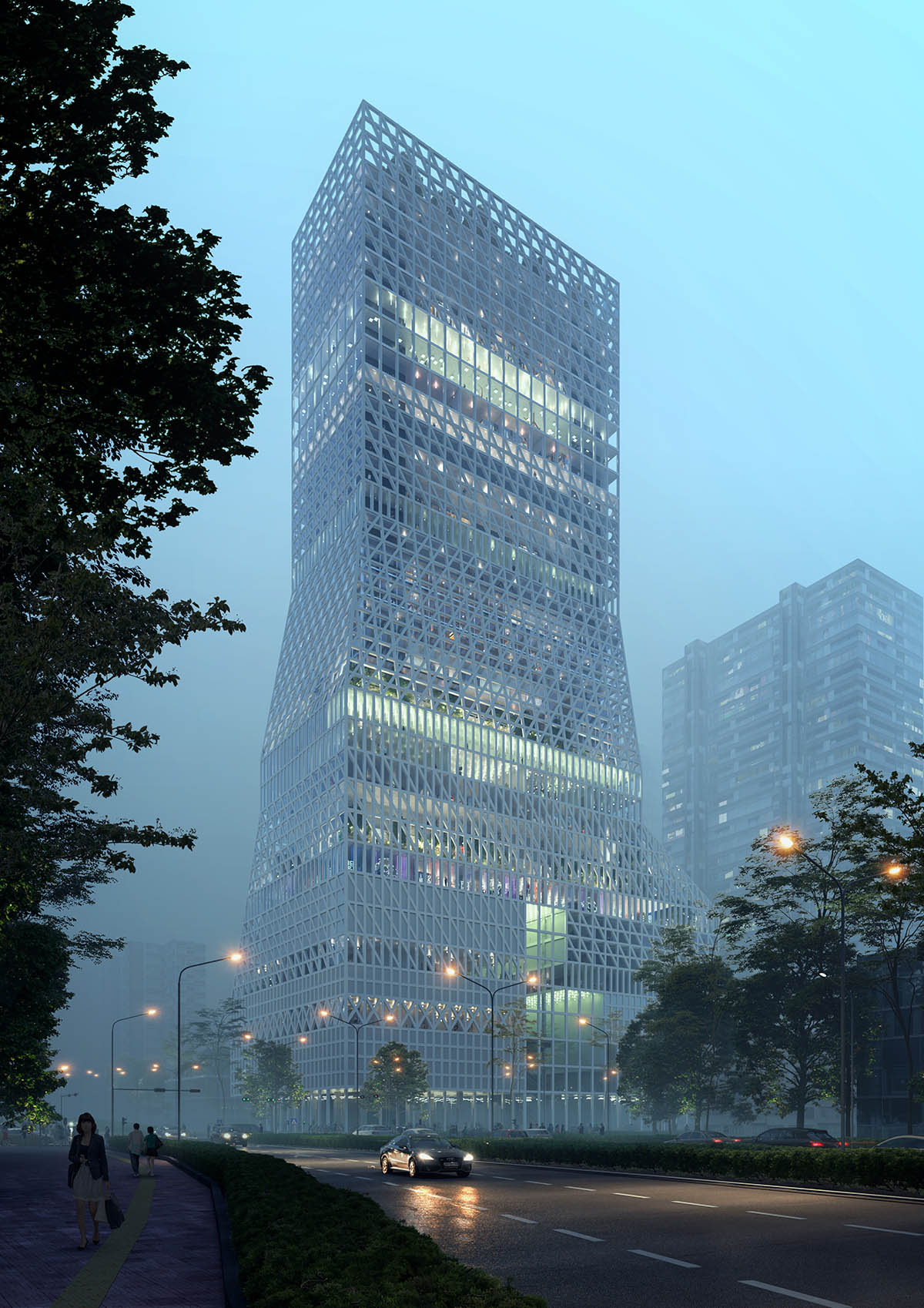 Mecanoo has won a competition to design a new mixed-use tower in Shenzhen, China. The new tower, called Futian Civic Cultural Centre, will be built in Futian, one of the oldest and densest districts of Shenzhen.

The design scheme responds to the urban regeneration efforts, aiming to breathe new life into this urban centre, which lacks urban quality and is crowded with residential and commercial high-rises. 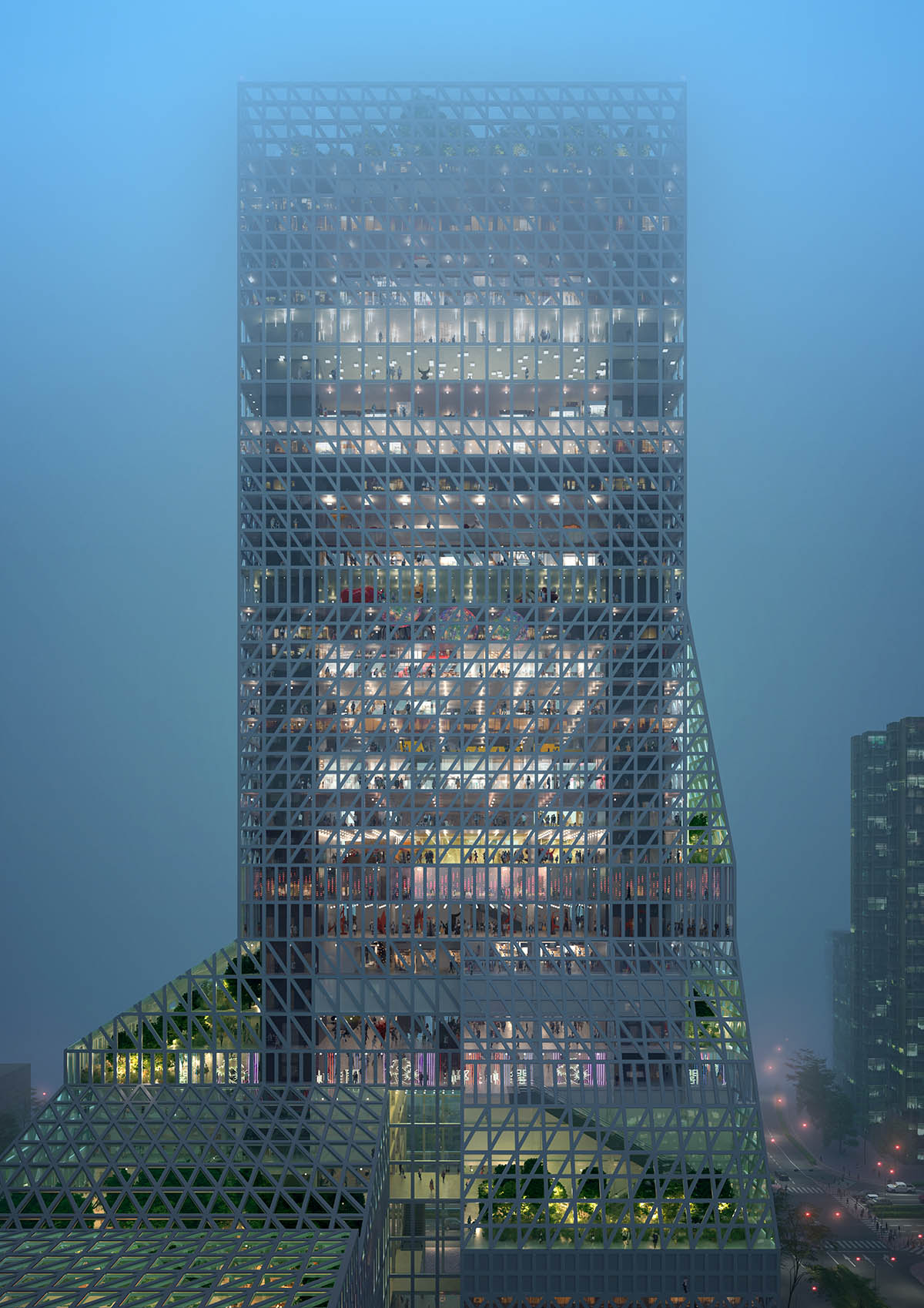 The new Civic Cultural Centre plays a major role in this effort and will house cultural programme and social spaces for stimulating urban activity. Public life in Shenzhen, as in other subtropical cities, thrives in semi-open spaces. The firm's proposal is therefore a building that breathes: open to daylight and natural cooling breezes, and filled with greenery. 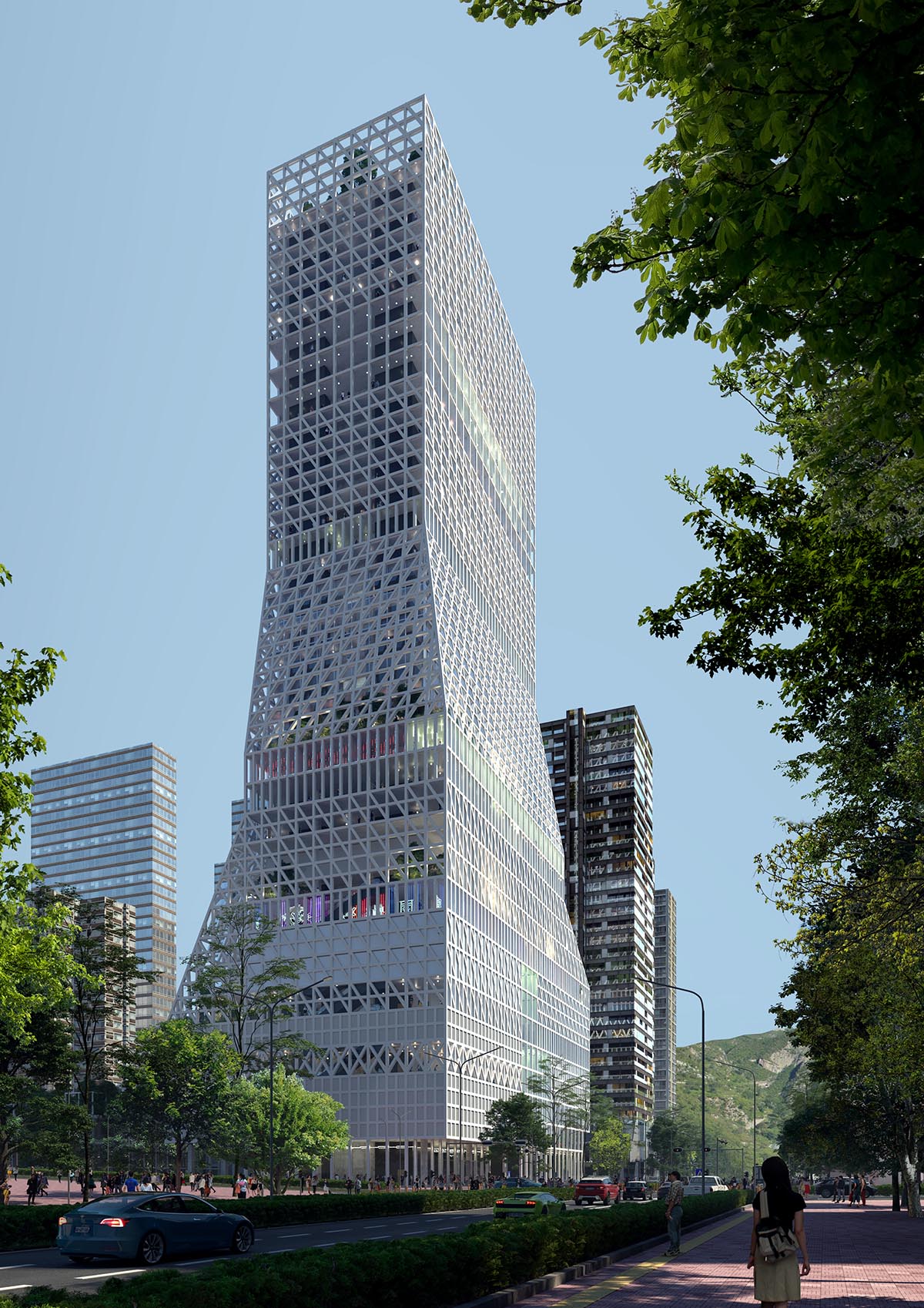 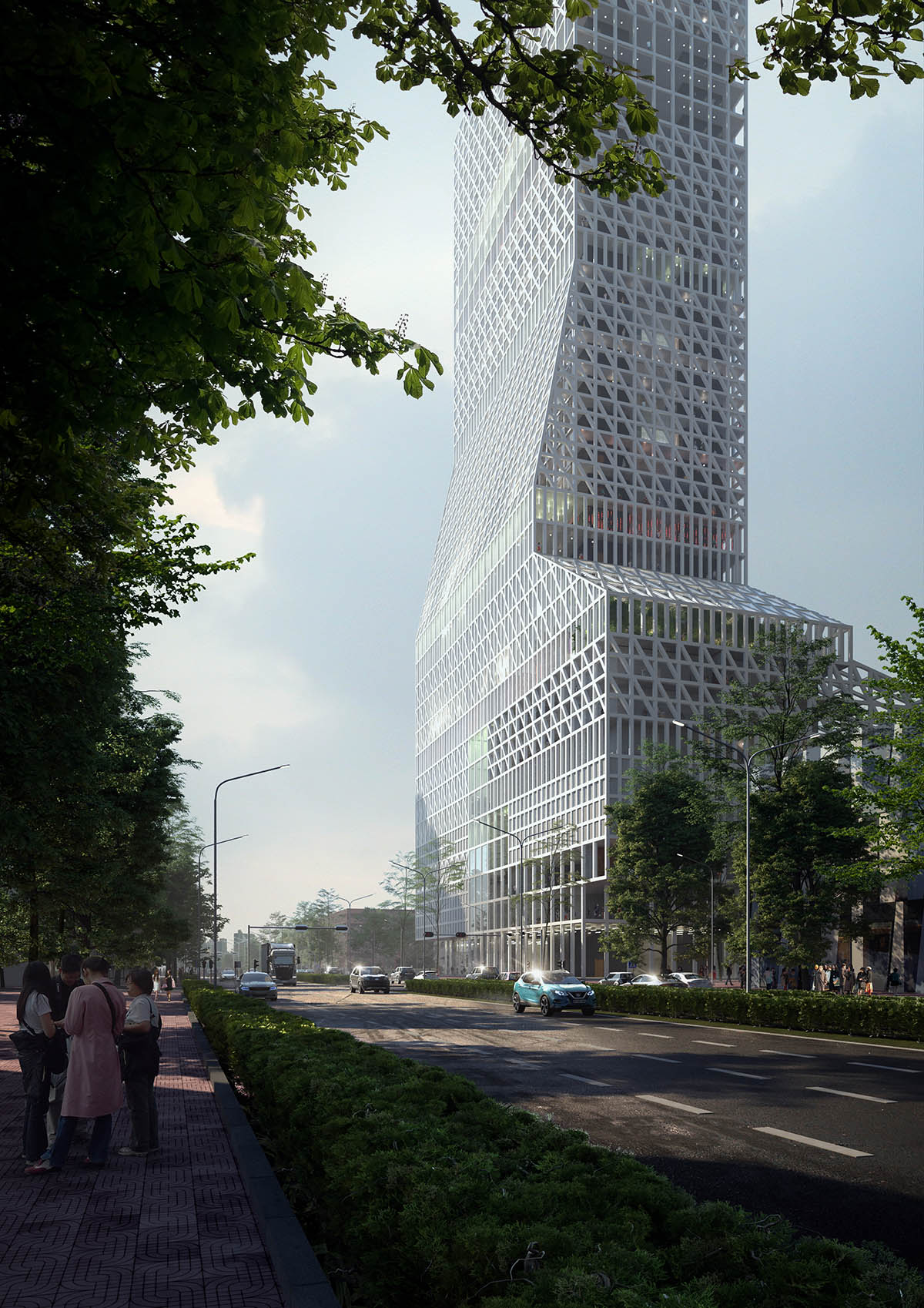 "The ground floor is thus designed to be as open as possible, despite the confined urban plot. A south-facing public square and a wide semi-interior east-west pedestrian passage provide pedestrian links across the site," said Mecanoo.

"Inside, the ground floor is lively and open, with retail functions and a fully glazed facade that can be entered on all sides. This open public interior directly connects with the theatre lobby, which is the main urban catalyst of the cultural centre." 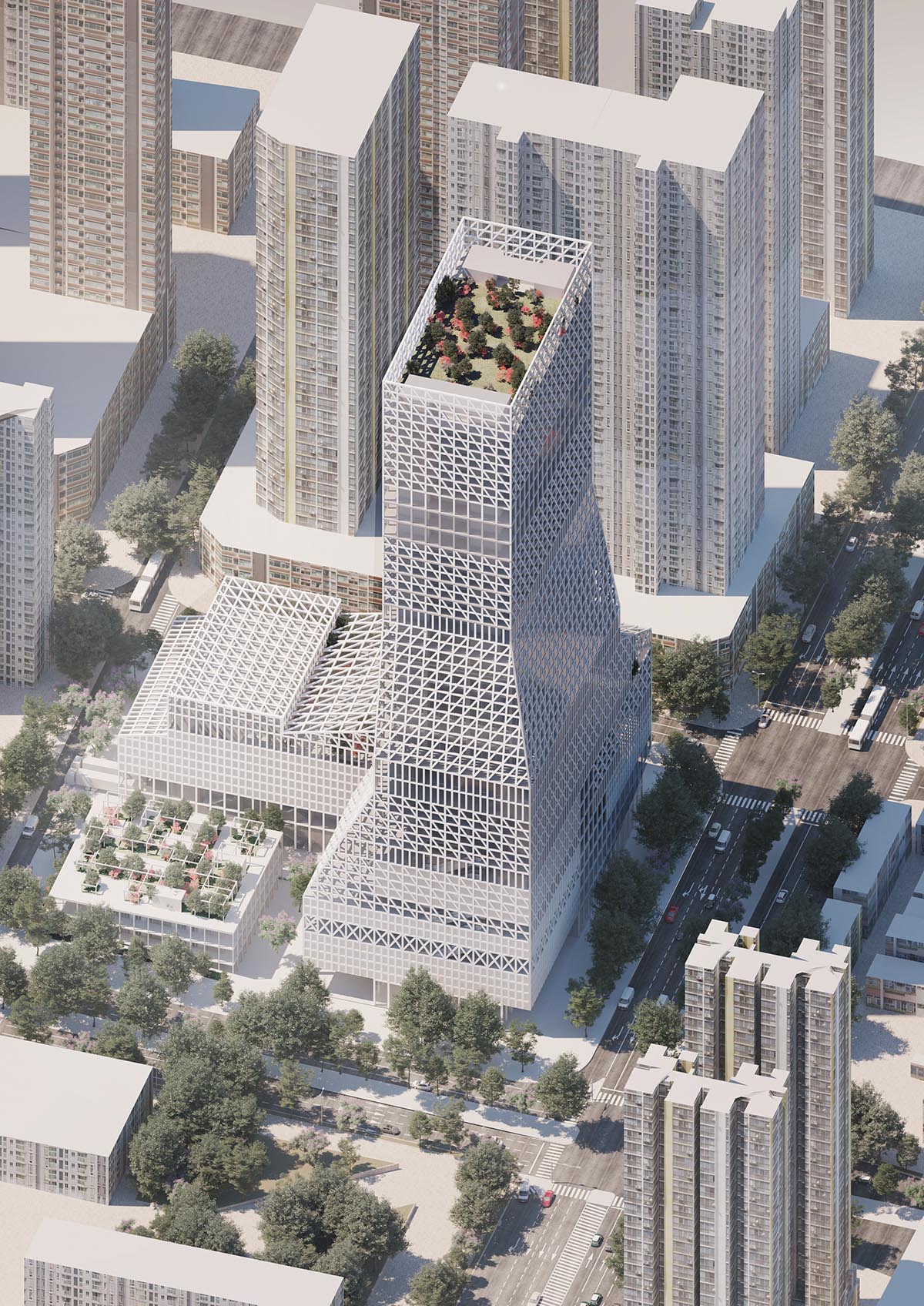 The permeable ground floor, together with the two bordering main roads and metro station within 200m, ensures that the building is well-connected.

To serve Futian’s high population density, a large amount of cultural programme was to be built on the tight 10,610-square-metre plot: 62,000 square meters of above-ground functional spaces in total, including three theatres, a library and exhibition halls. 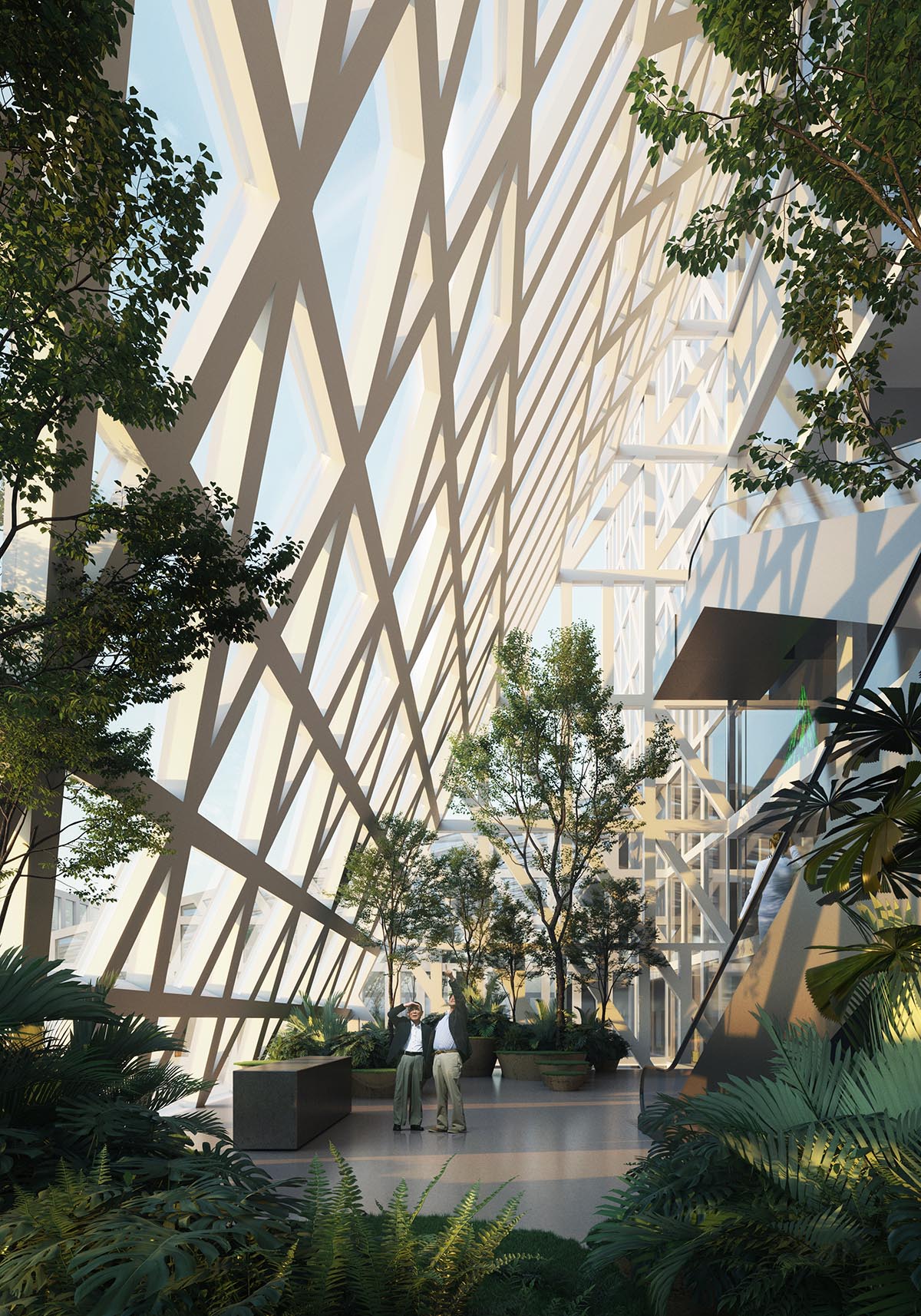 The brief also included a kindergarten on a separate sub-plot. This spatial puzzle was solved by arranging the various functions within a 150-metre tower sitting on an L-shaped base. The theatres are not placed directly under the high rise, thereby avoiding undesirable structural complexity and allowing them to be designed with optimal functionality. 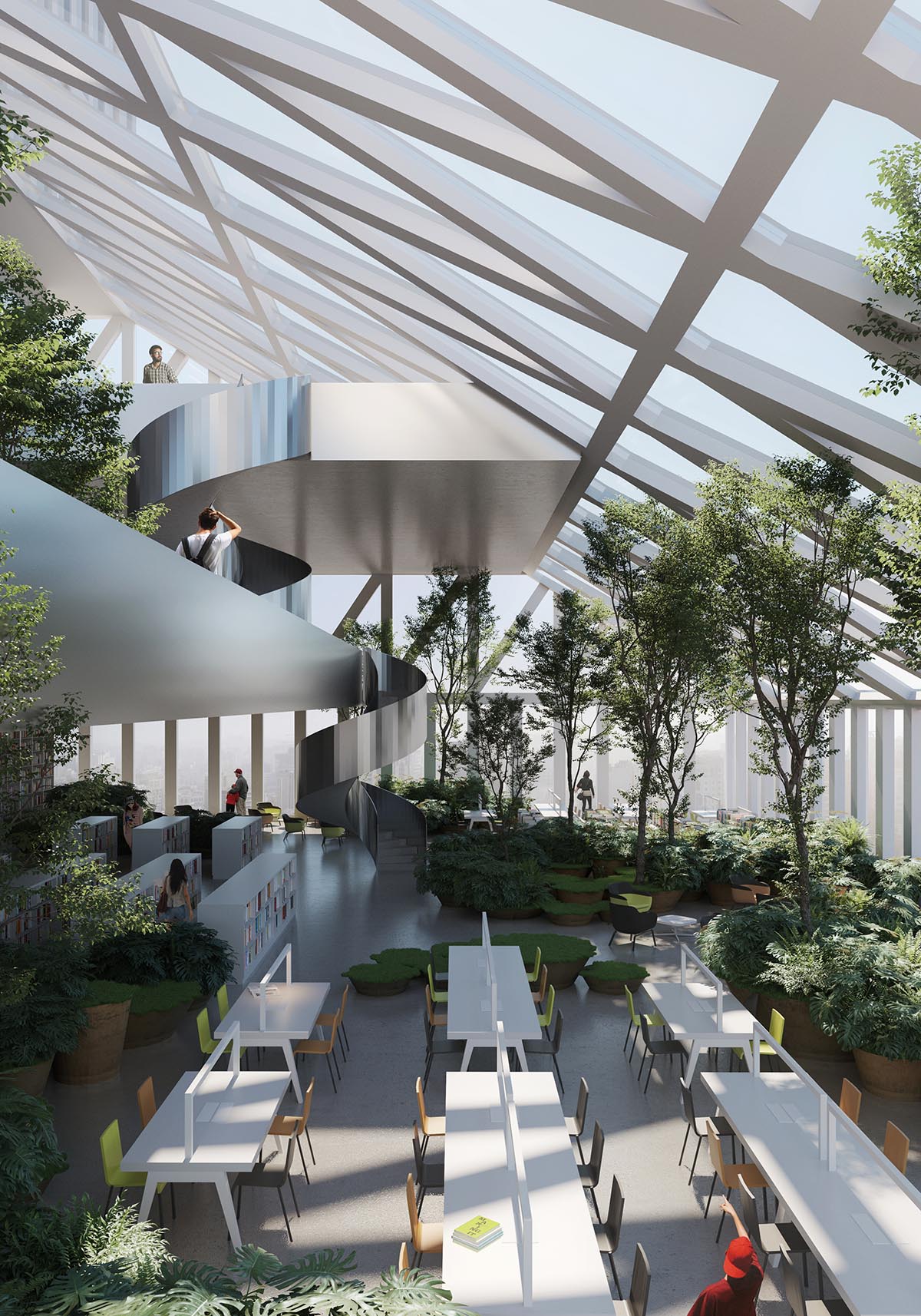 To give the cultural centre a strong, singular appearance, the building is wrapped in a uniform triangulated grid facade that flares outwards to incorporate the theatres. Scaling downwards towards the edges, the flared volume smoothly transitions between the 150m tower and the smaller scale of the kindergarten. 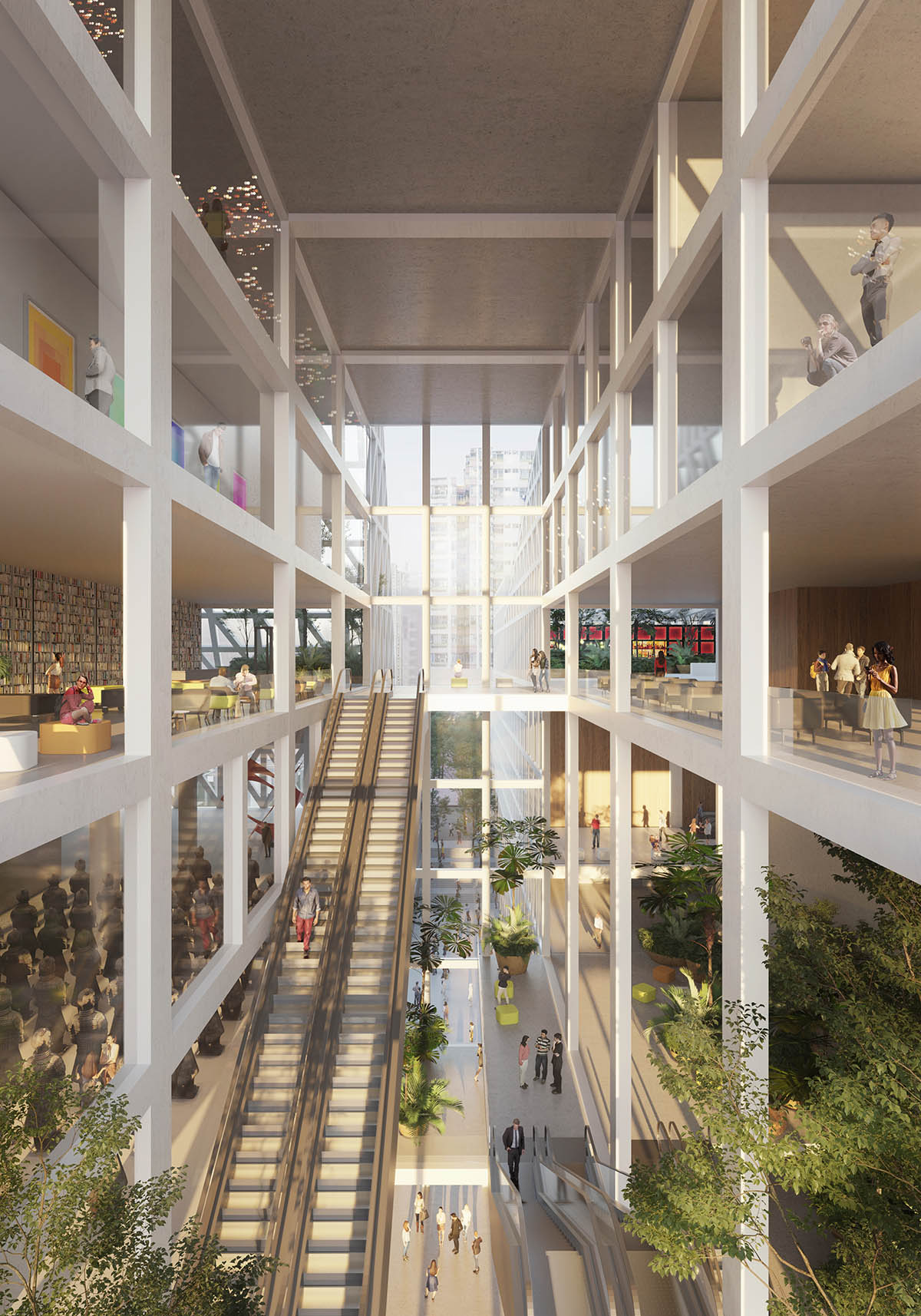 The Cultural Centre draws ground floor public activity to the top of the tower via efficient elevators and long escalators that connect a series of green atria and terraces. Large, openable planted atria include a roof cafe and open exhibition space above the theatre, an exhibition garden lobby and a library garden. 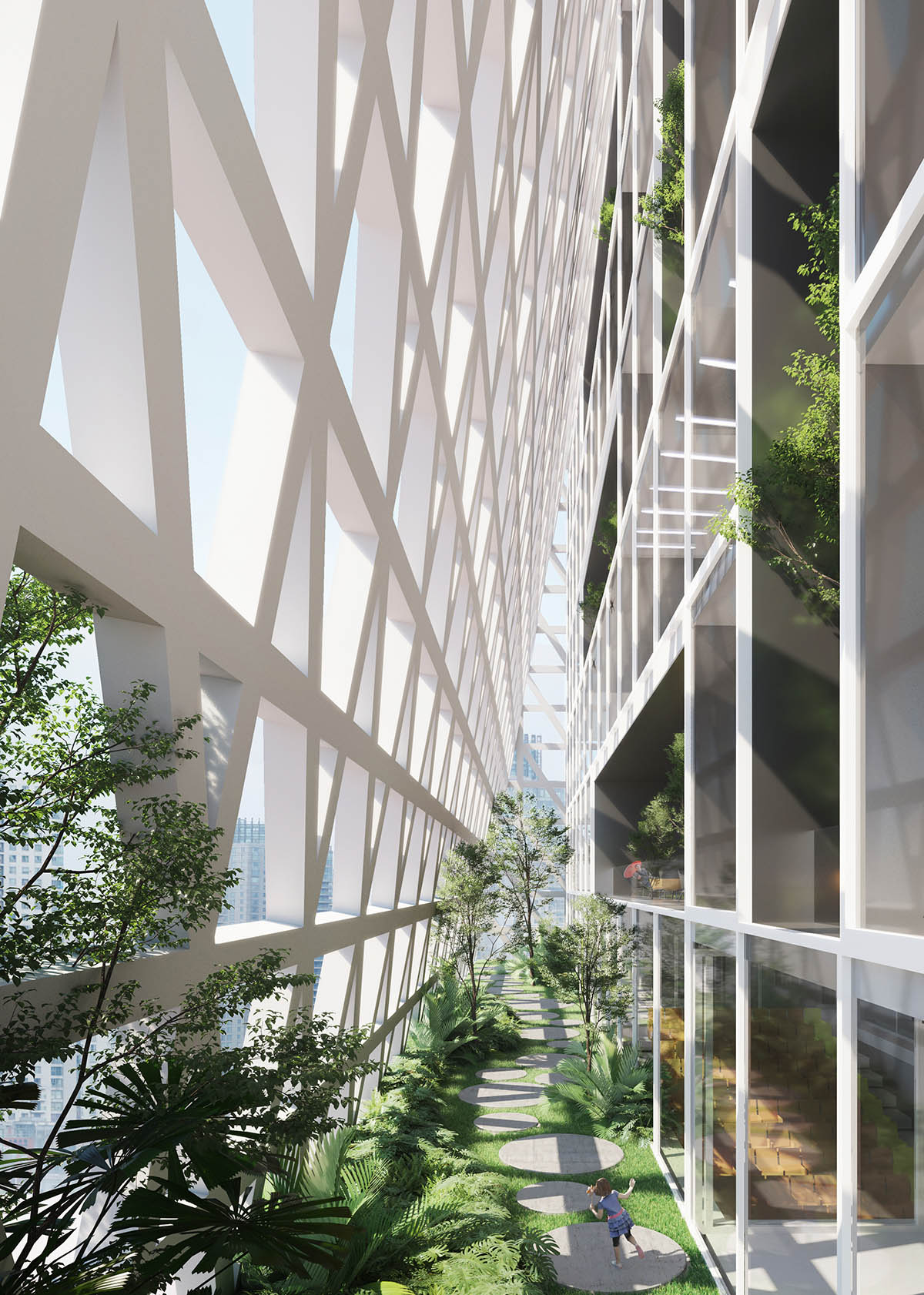 Urban greenery and sky gardens provide shade, reduce the urban heat island effect and cool the public spaces. They also provide a transition space between indoor and outdoor, public and private functions. The network of atria acts as blood vessels that pump life into the building, making the journey of moving vertically into a lively urban experience. 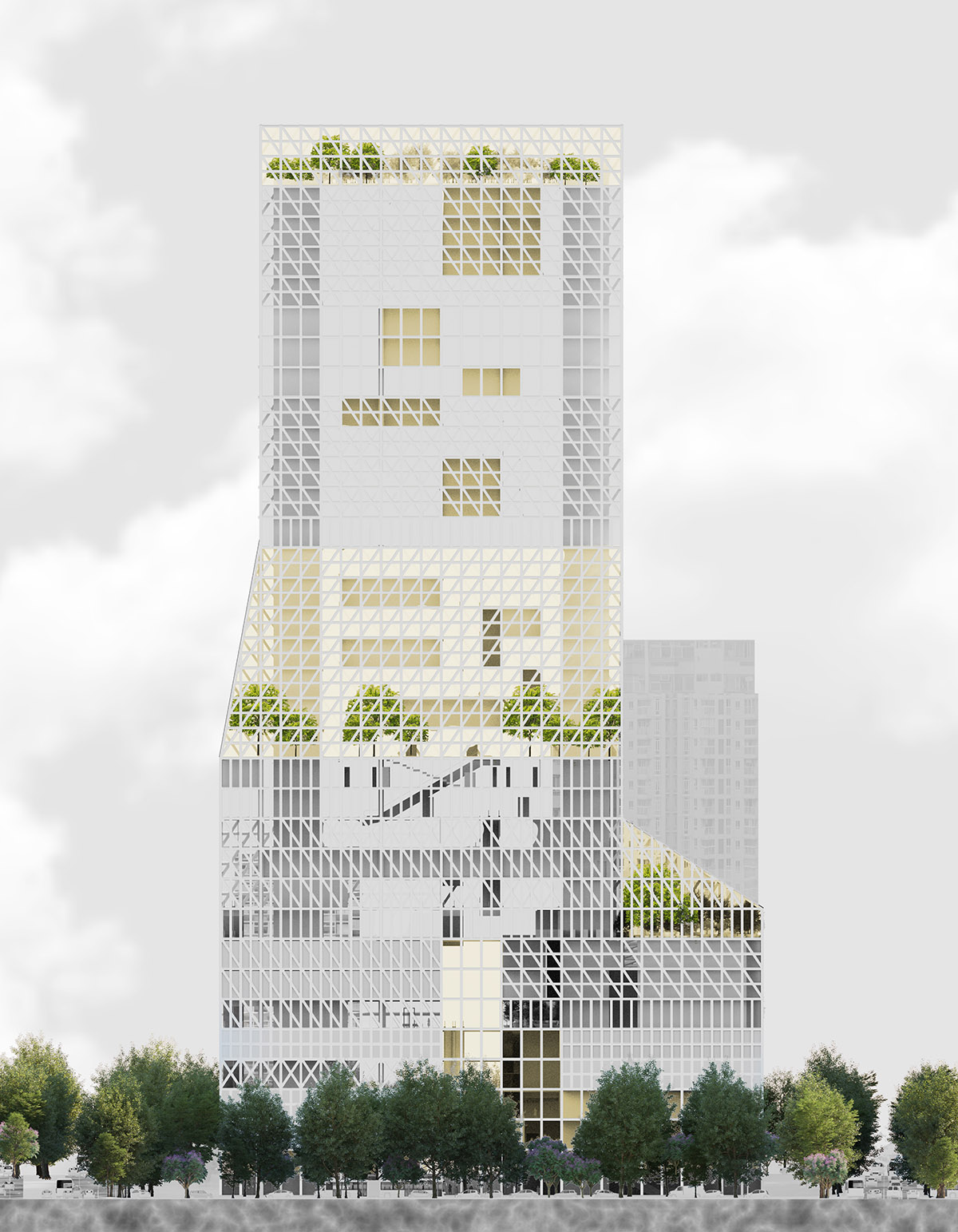 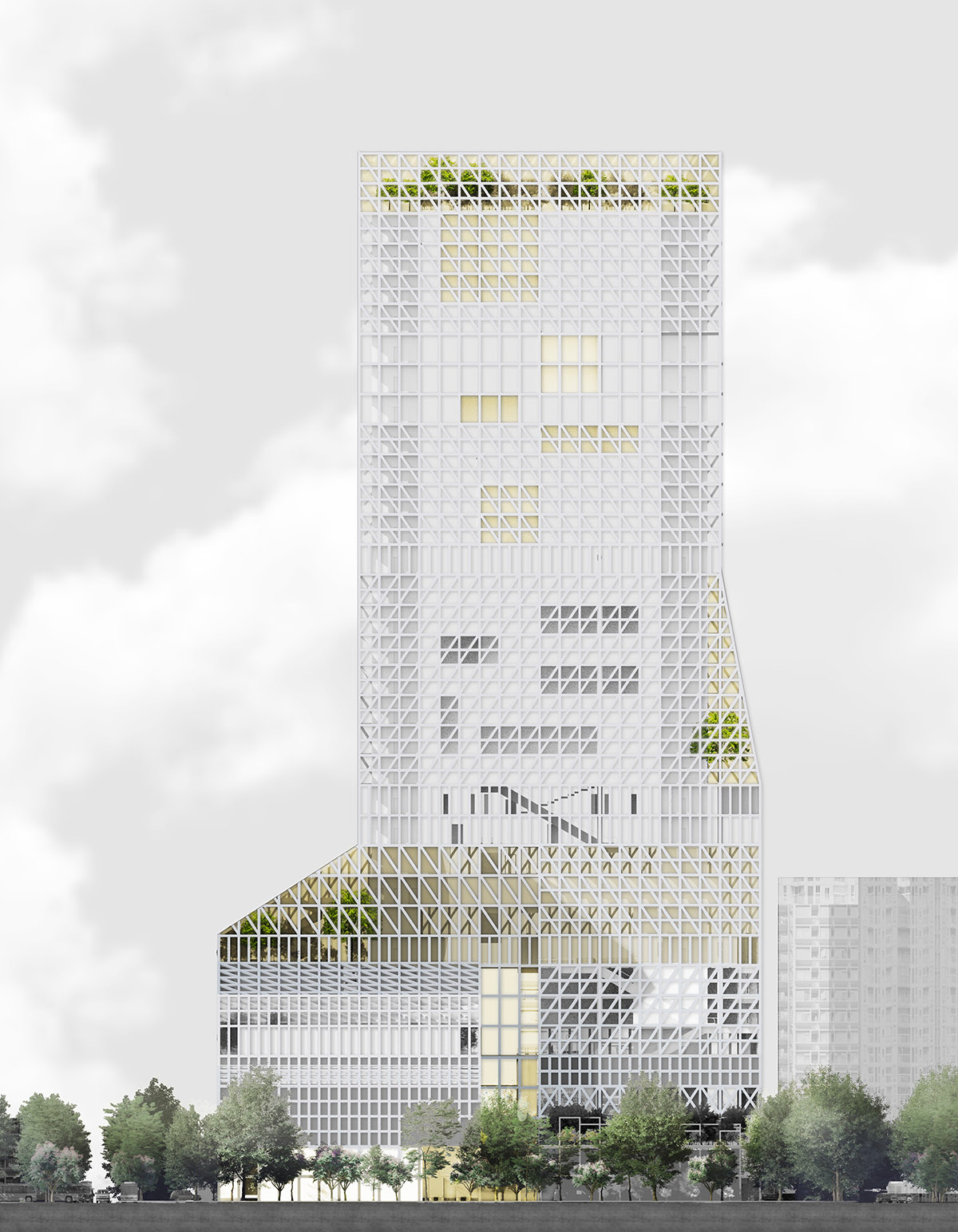 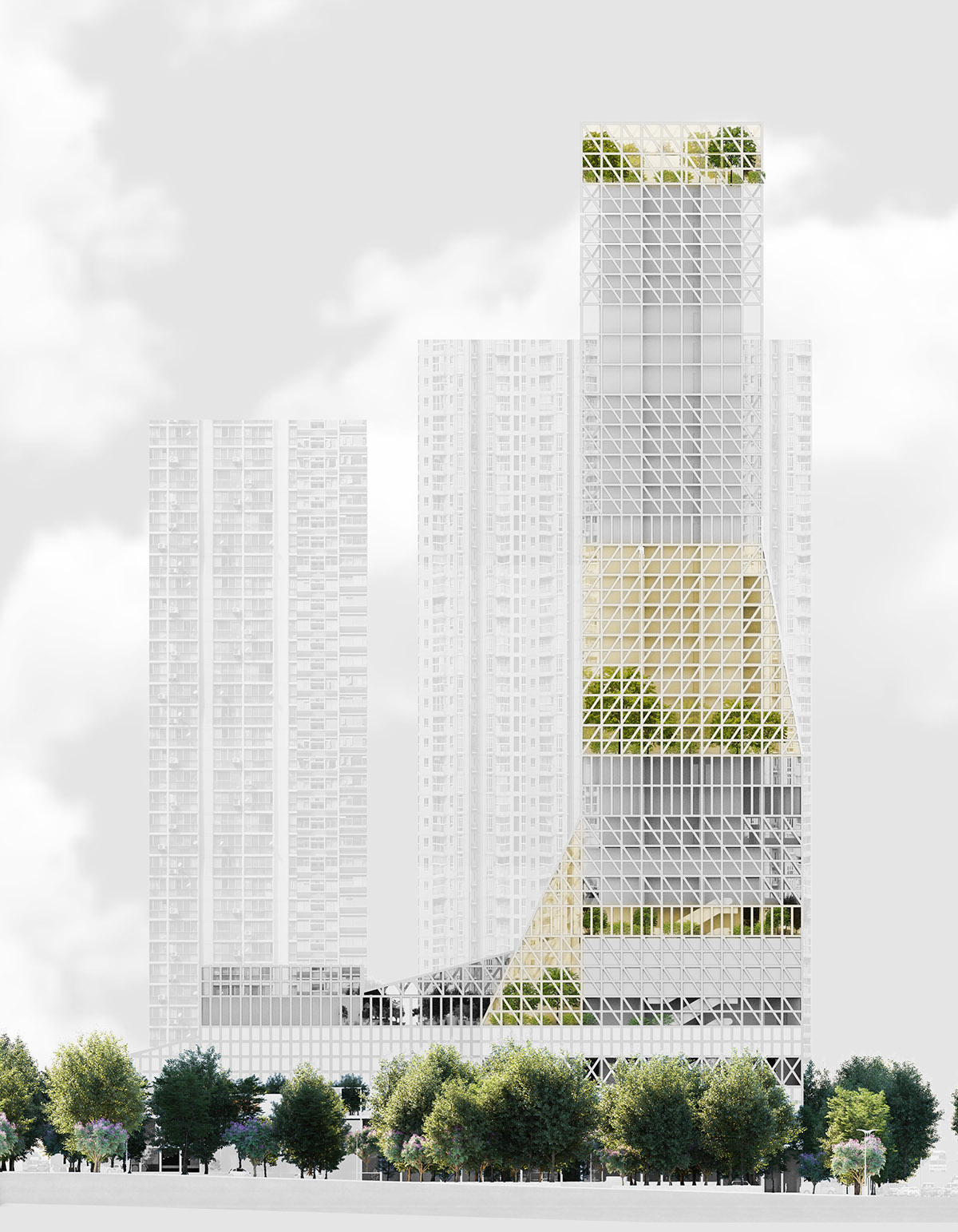 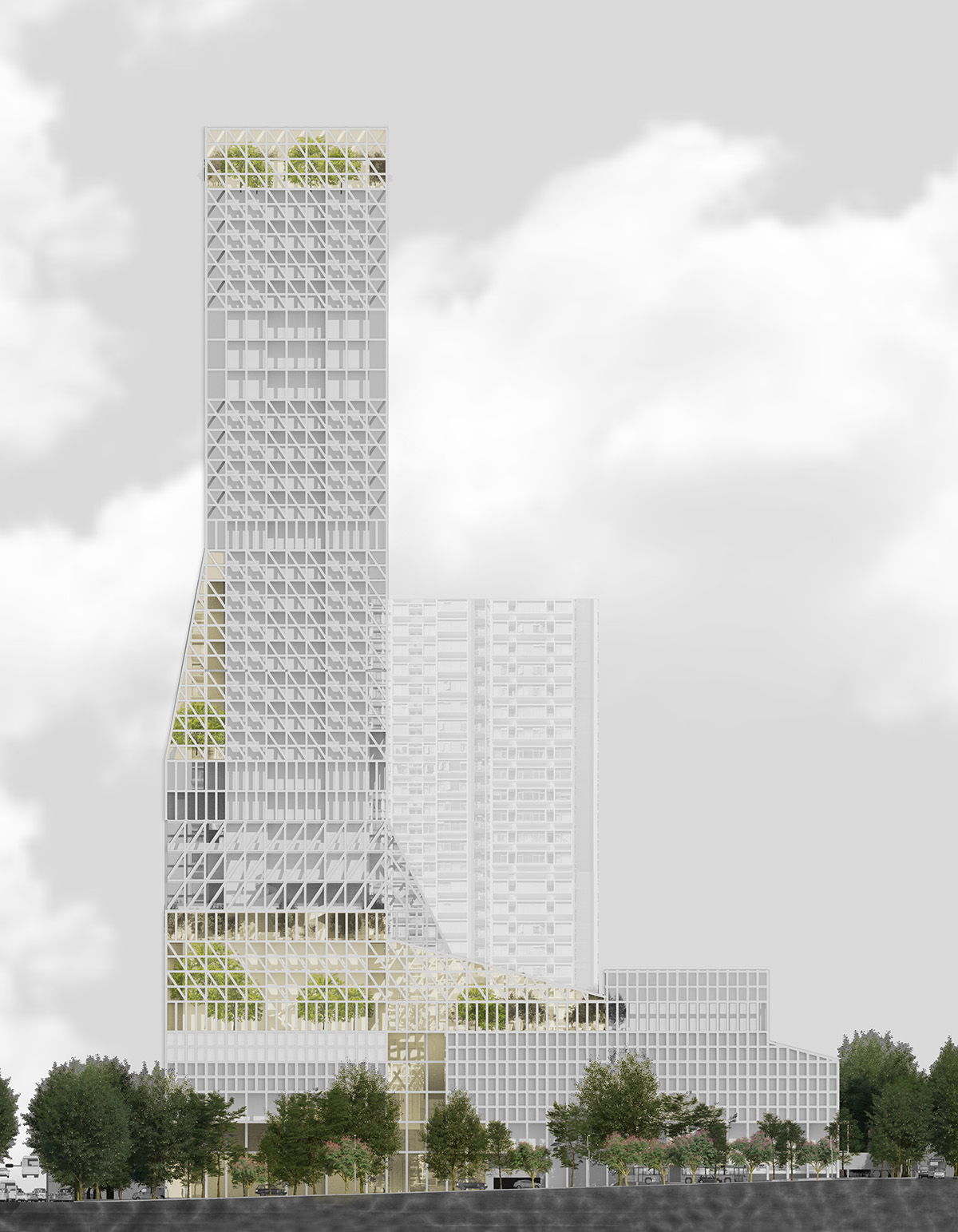 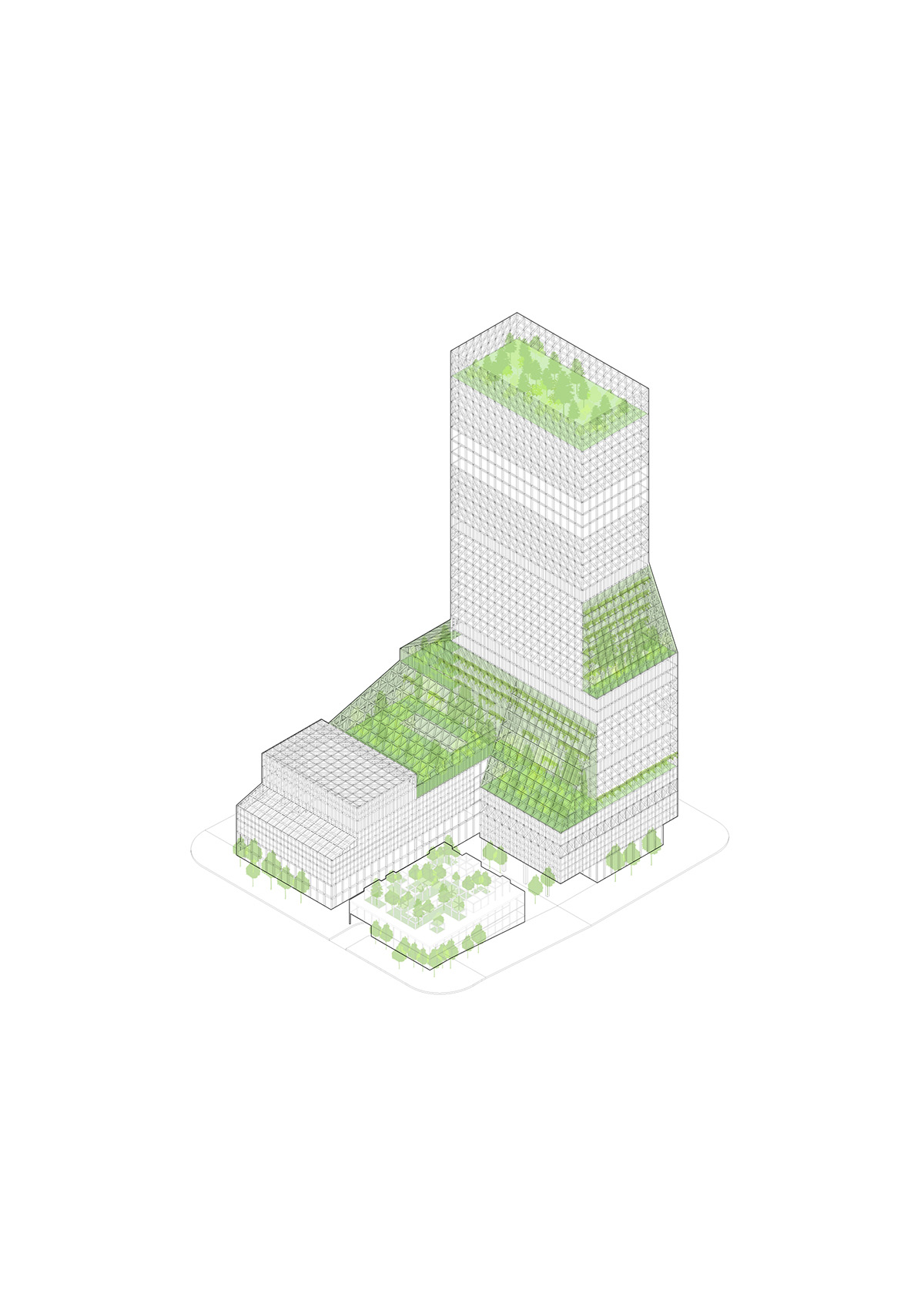 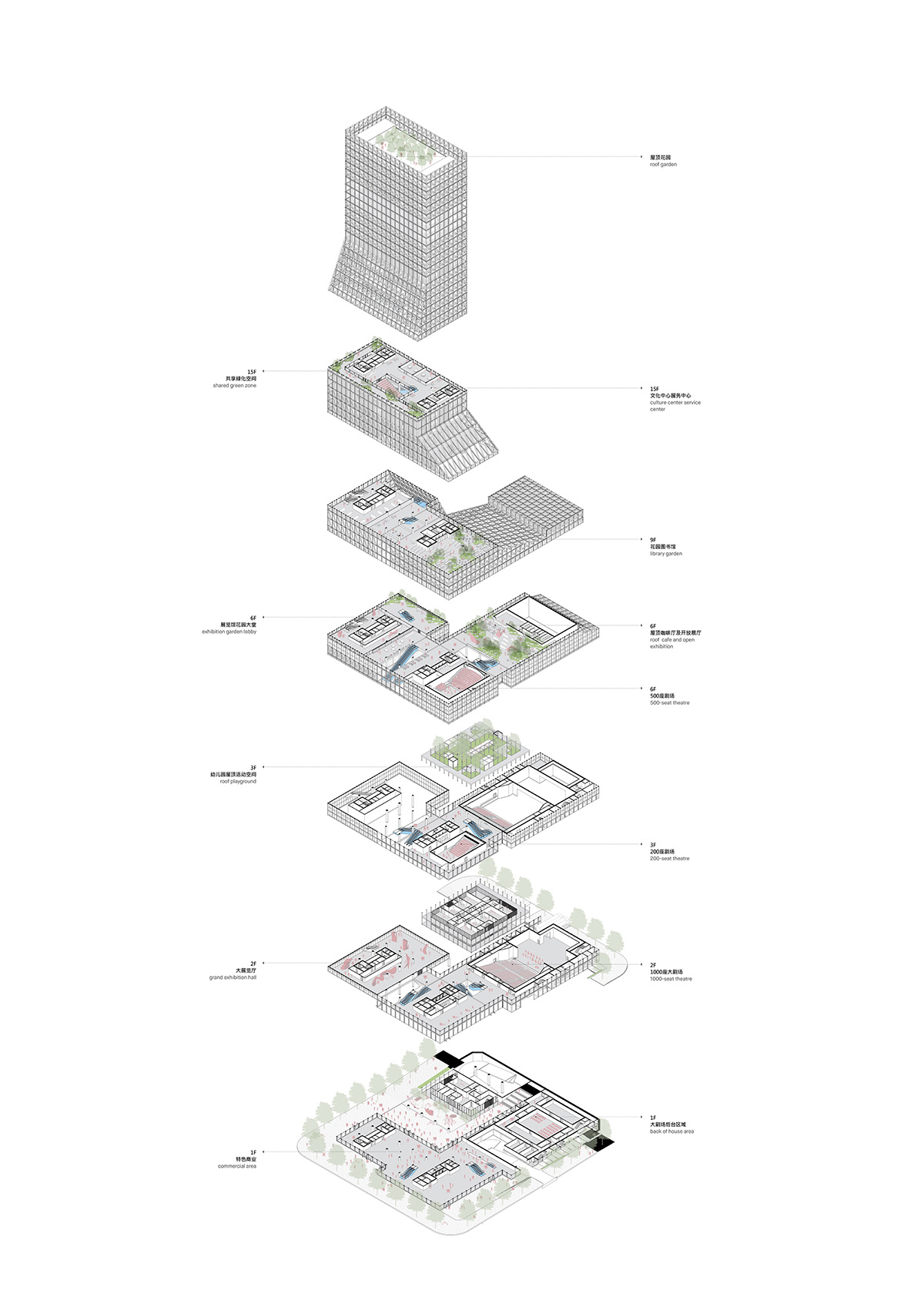