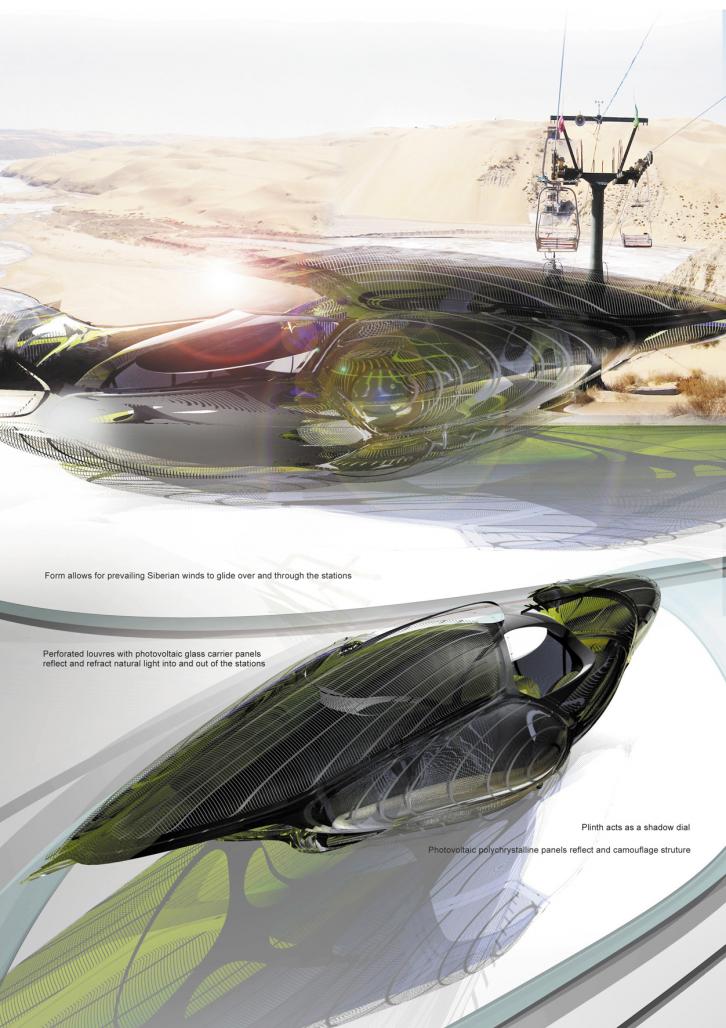 The project is for the design of 2 cable car stations along the edge of the Gobi desert, starting from Ordos city the trail leads into the deserts sand dunes, a major tourist attraction. The form optimises the use of dichroic and holographic film in glass cladding, which helps to adapt to the specific site conditions and their extreme temperatures and reflectivity, while articulating a coherent overall formal architectural language. Two contrasting elements ‘Reflecting sky & Shadow’ generate each station’s design criteria, influencing a series of reflected and projected spatial experiences both physical and projected light displays. A lightweight organic roof structure floats on top of a concrete plinth. The artificial landscape functions as a relief in which various movements and circulations are inscribed. The Roof Shell’s fluid shapes and organic contours mimic the nature of the ever changing sand dunes, like its environment the structure is never seen in the same way twice. It shimmers and abstracts as well as camouflages itself within its context, its presence and characteristic always determined by the natural sunlight and its intensity. New production methods like CNC milling and thermoforming guarantee a very precise and automatic translation of the computer generated design into the built structure. The resulting aesthetics might be reminiscent of streamlined Industrial Design pieces (Car Bodies, Aeroplane Wings, Yachts etc.). Each station has its context, its topography, its projected light spaces, its movements. The track’s inclination and ratios are dominant technical parameters. A high degree of flexibility enables the shell structures to adjust to these various parameters while still responding directly to the natural light levels which have determined its form. The concept of lightness is explored. Large cantilevers and small touch down areas underline a floating appearance of the dichroic illusion stations.
The form allows for air to circulate and cool the interior, the plinth prevents conduction of heat from the immediate environment. The structure is lifted from the ground permitting a breeze to move through the pre-cast concrete primary structure. The structure accommodates different types of cladding modules, which can be replaced according to season, during the winter months the Siberian winds form sheets of ice, the photovoltaic polychrystalline panels keep the stations from freezing allowing for the winds to carry through it not only sand but prevent ice from settling within the structure. The structure acts as an atrium, perforated temporary louvres shelter from the sand and direct sun whilst the Thermoplus energy high yield glass acts as an all season insulating glass, providing thermal insulation against both cold and excessive heat.

Whilst the overall form allows for the prevailing Siberian winter winds to glide over it it is important to test materials within a formal constraint in order to understand the materials affects on light reflection and refraction particularly when working with the environment and sustainability. The form has developed using a computer software which uses the dynamics and physics of a specific environment such as the Ordos desert in order to understand through simulation and caustics how light is scattered and can be controlled in turn predicting how exactly the form can influence and respond to its environment. An important mechanical test rather than purely a formal gesture.