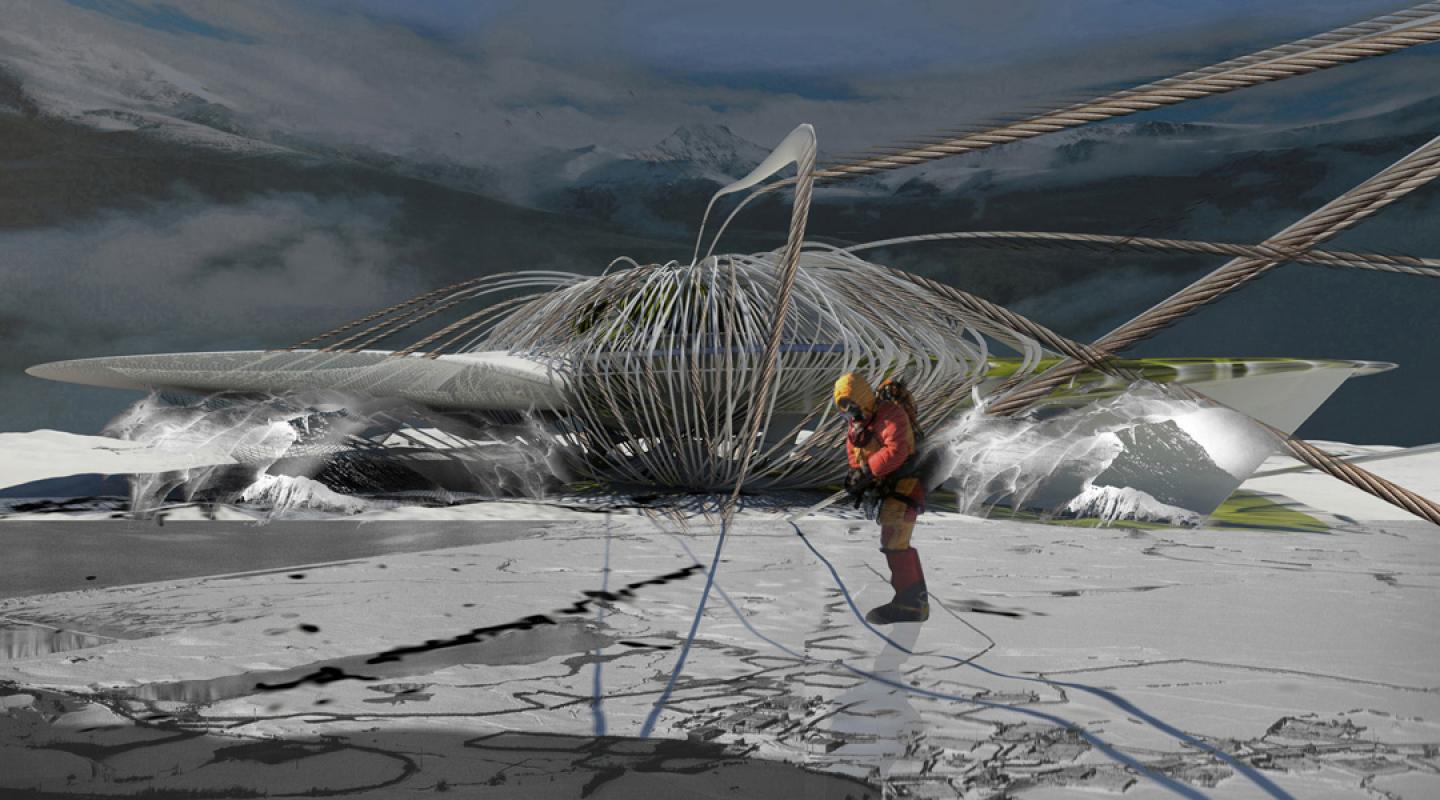 The hut offers a snowdrift frame made from weighted carbon fibre mesh, this contoured landscape mimics the surrounding vertiginous precipices and landscapes, the carbon fibre snowscape creates an artificial snow cave which can be burrowed/excavated into and around enabling climbers to inhabit the structure in a similar way to a snow cave. The composite carbon frame catches the snowdrift using snow as an insulating material, as it is a mesh structure pockets of rooms can be carved into the build up of snow as well as air vents to help with air circulation,it is possible to further insulate the structure by digging a small pit deeper into one part of the cave floor to provide a place for the coldest air to gather, away from the occupants, the entrance may be partially blocked with chunks of snow to deflect wind and retain heat.
Multiple layers of Silicium applied to the carbon fibre mesh produce an electric current from direct natural light, photovoltaics can be used to store this energy which is forced through the electrical resistance wire embedded within the mesh, creating heat energy and then cooling the structure to create an icy surface trapping snow for added insulation, and melting it away as necessary, which in the process contributes to strengthening & insulating the structure. A wooden frame, sits within the artificial snow cave, suspends an elevation of climbing ropes creating a more flexible space which can be canvased if necessary, inspired by the snow lotus whose leaves are covered with dense white woolly hairs minimising frost damage at night and preventing ultraviolet light damage from the intense high altitude sunlight, with this principal in mind the rope structure sways attempting to prevent freezing, it is clamped to the wooden frame in sections and can be added to. The artificial snow cave landscape mesh is self supporting, it rests on the undulating parts of the contoured carbon fibre mesh. The structure is to be a part of the trekking experience as it is similar in nature to emergency shelters which can be excavated according to needs and party size.
Cell like modules within the rope structure contain sleeping quarters, holographic filters applied to the carbon roof panels control temperature and direct light into and throughout the sleeping modules and into the artificial snow cave below. Green photovoltaic panels control light and produce energy stored in the carbon fibre snow cave mesh. The snow cave provides shelter at temperatures of 0C even if the outside temperature drops to -50 C; constructed by excavating snow so that the entrance tunnel enters below the main space to retain warm air, in this case within the snowscape mesh emerging into the wooden framed rope shelter. Construction is simplified by building it on a steep slope and digging slightly upwards and horizontally into the slope. The roof is domed to prevent dripping on the occupants and because it is made from mesh it is easier to clear ventilation holes avoiding suffocation. A narrow entrance tunnel leads into the main chamber which consists of a flat area with elevated sleeping platforms excavated from snow.