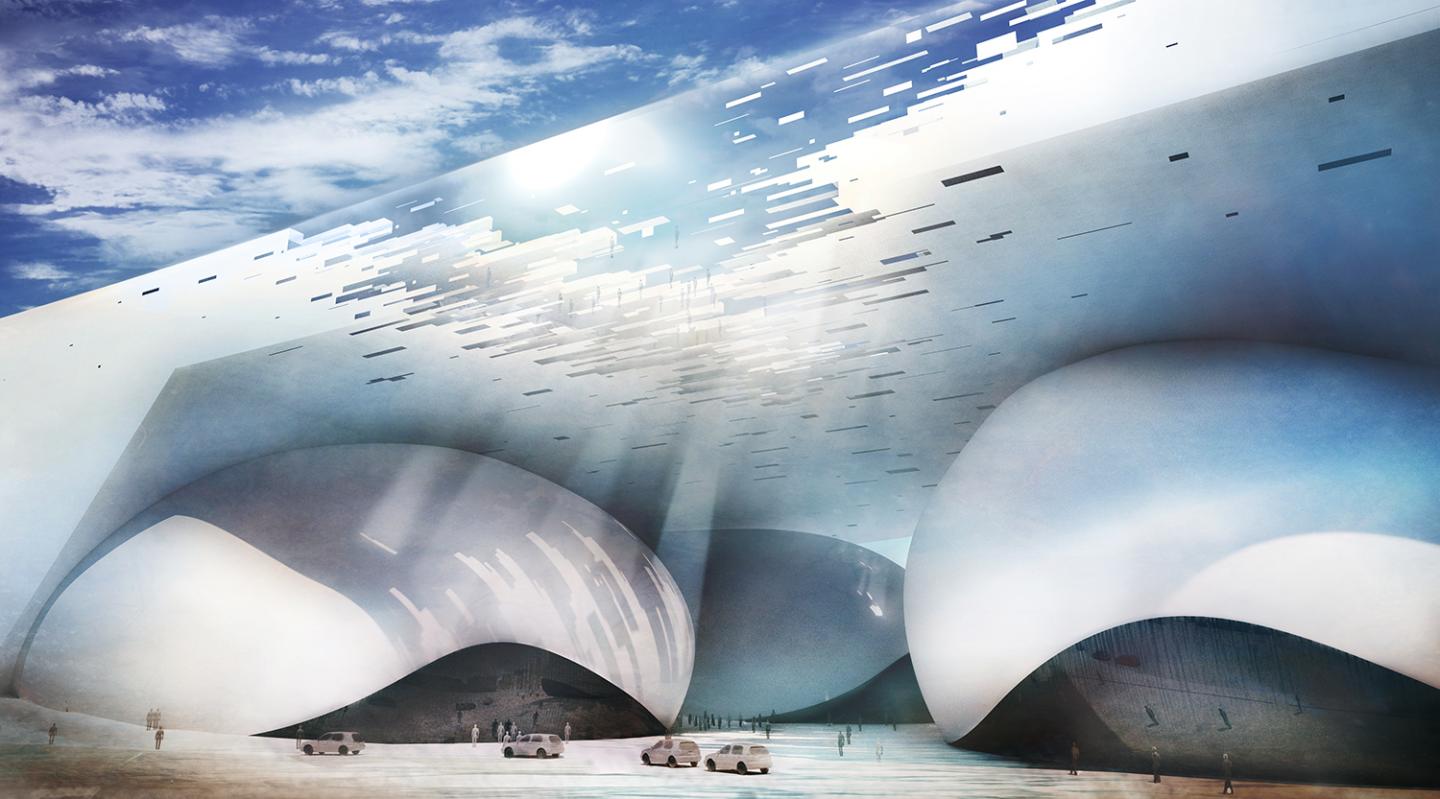 The evolutionary growth of a city leaves traces that remain as ghost-like surface images of what once was. These palimpsests created by the shuffling, rebuilding, and remodeling of space inform us of the realities of the past. Such shadows exist in the modern Taipei, a city that has a distinctive quality at night, where the darkness represents ambiguity and spaces are no longer perceived as rational entities. Public and private dissolve into one another and the shapes and forms of the city take on another life. This is best illustrated in the celebrated Shilin night market, which has become an indispensable focal point or recreation and entertainment for Taipei.

The 19th century floodplain of the Keelung River remains as an indelible mark on the streets and neighbourhoods of Taipei. The symbolism of the river and its importance in the development of the city, as a source of trade, wealth and influence, is celebrated in the three distinct forms of the new arts centre. Washed and eroded by water and sand, they appear as pebbles deposited randomly on the old river bed. The canopy roof that sails above acts as a surface to diffuse and refract the sunlight, creating an effect similar to dappled light washing over a body of water. Here the smallest of the pebbles punctures and supports the surface of the roof as a restaurant with views across the city.

Approaching the site, the streets dissolve into a series of broad channels, heterogeneous spaces that appear as if formed by the flow of water. This simple grouping of forms is the setting for the three principal spaces: the Grand Theatre, its companion Proscenium Playhouse, and the Multiform Theatre. Each is entered through individual foyers located off of the major open air event space at their centre. All of the major spaces are visible from here, including the principal stair that guides visitors to the elevators banks that transport them up to the roof. The roof acts as a fragment of the city, made up of a series of public event spaces and outdoor gardens. Here a range of additional functions have been introduced to intensify the activity at this high level. On the west elevation, the roof dissolves into a transparent surface, where the late afternoon sun penetrates down to the ground.

The arrangement of forms retains the ground level as a genuinely open people’s space where the theatres are seen as being part of the public domain. The three major auditoria can be appreciated by those not attending performances, as the glass foyers spill into the public space while they give a glimpse of the inside. Concert and theatre goers have the choice of entering the auditoria directly or travelling up to the roof, where the public event spaces, libraries and gardens are grouped together as a complex mesh of uses.

This major public building is integrated into the fabric of the city in a novel way. The city is seen as a tiered structure where the principal elements of the public building are merged and blurred to allow an unexpected degree of access. Large areas of the building are open to the public and public areas are juxtaposed to create synergies between the different uses. Libraries, shops and restaurants all profit from their proximity and free relationship to each other. The formality associated with a major cultural institution of this type is avoided and the concept of theatrical event is revised. Viewed from across the city, the new performing arts center is an emblem for Taipei as it enters a new age.