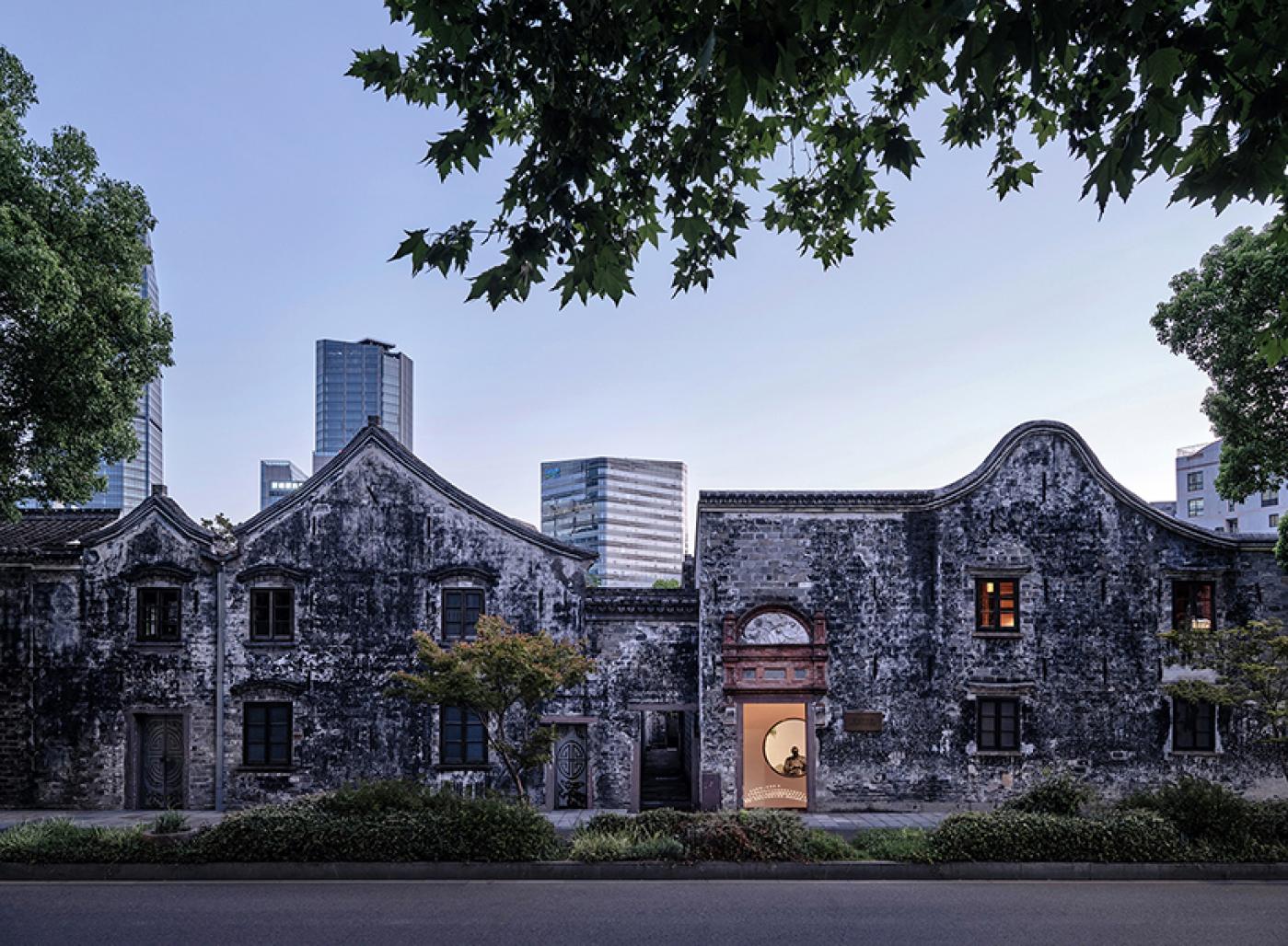 The more sensitively-restored a building, the more authentically we may witness the past lives of those who occupied it.
—Peter Zumthor, "Thinking Architecture"

July 30, 2004 - Dongsheng Chen waited anxiously to board his plane. On behalf of himself and his classmates, he was anxious to visit Mr. Dong Fureng, who was seriously ill in the United States.
In August 2021, Wuhan University received the largest donation in its history: 1 billion yuan, from alumni Dongsheng Chen of Taikang Insurance Group. In the same year, WIT Design & Research completed a most notable project: the restoration of the former residence of Dong Fureng into a memorial museum, commissioned by the Dong Fureng Foundation, with Dongsheng Chen is the main promoter of this project. Chen was giving back to his alma mater, and expressing gratitude to his teacher. For us, the general public, the gesture demonstrates the impact economists and entrepreneurs can make on our society.

The Pioneer of China's Ownership Reform
Defender of private economy

Dong Fureng’s outstanding contribution to the development of China's economic theory and reform that led to its opening up has already been memorialized by modern history. His virtues of realism, innovation, and unswerving dedication serve as an exemplar to students and future generations, with some of his students having already blended successfully into the core force of China's contemporary economic development and the entrepreneurial class.
On Ningbo’s first cement road, Xinma Road, a century old and a harbinger of the city’s precipitous rise, one finds Dong Fureng's former residence. Compared with the surrounding high-rise buildings, this place looks quiet and timeless. The blue tiles and white walls are mottled by the passing years, bespeaking a unique gentleness and elegance.
Dong Fureng, known as the "Greatest Economics Master of a Generation", advocated the separation of government and enterprises, and blew the first clarion call for the reform of the state-owned economy.
As a teacher, he preached, taught, and encouraged disciples of the Dong family to uphold business ideals and promote economic growth. He also cultivated business leaders such as Dongsheng Chen, Yuan Tian, Zhenhua Mao, and Luming Ai, who did much to advance the tide of China’s market economy. As a scholar, Dong was awarded an officer-level academic medal by the French government.
This is one of the most salient aspects of the construction of The Dong Fureng House Museum, with a far-reaching significance lying within: as the "Former Residence Museum" influences more and more fields, the standard of "being remembered by history" becomes more and more multidimensional.
"When I was studying abroad, I saw a large number of former residences and museums of notable historical figures, and truly felt the progress of civilization. We very much hope that through this project, the world can experience a similar respect for the advance of economics,” says WIT Design & Research’s Zhenhua Luo.
Q: What was the original intention of building The Dong Fureng House Museum?
A: This former residence is the house of Mr. Dong Furen's grandmother. He was born here in July 1927 and spent his youth here.
When Taikang Life Insurance’s Ningbo Branch opened on April 17, 2001, I especially invited Mr. Dong to participate in our opening ceremony, and also accompanied him in finding this old house. Several different families had occupied the place by then, and the current occupants no longer knew such a luminary had been a past owner of the house. Only a stone plaque bearing the inscription "Zhao, surnamed Jiqiang" (Dong's grandmother’s surname), faintly visible in front of the door, bore witness to traces of the teacher's life spent in that dwelling.
I took a since-treasured group photo with Mr. Dong in front of that stone tablet. After Mr. Dong passed away, I visited the old house several times. In 2017, Mr. Dong’s daughter, academician Dong Xinnian, and her husband, academician Wang Xiaofan, returned to China. On a special trip to accompany them in visiting the place, I came up with the idea of turning the building into a narrative memorial space.
Today we commemorate him by restoring his old residence in order to educate our future generations, and encourage them to be as determined as Mr. Dong in serving and making contributions to their country.

Q: What is the most precious piece of knowledge that Teacher Dong imparted to you?
A: Entrepreneurs must demonstrate Mr. Dong's spirit of "staying virtuous and becoming a great leader".
Dong passed away on July 30, 2004, at the age of 77. About 3 months before his death, he wrote his last article, "Stay Safe" which was published in The Financial Times.
"Cultivating one’s virtue in order to be great" was also the topic of his application essay for Wuhan University in 1946. His economic life began and ended with this thesis. He emphasized that everyone must maintain their integrity, cultivate an authentic ideology and morality, while rigorously obeying the system, laws, and social mores.
“Cultivating one’s virtue in order to be great” was also the dominant theme of Mr. Dong's life. Now it is a spiritual treasure he bequeaths to this country, this era, and all our descendants. The best way to commemorate Mr. Dong is to safeguard this spiritual achievement, and pass it on. I often say that entrepreneurs are the backbone of a nation and a country. To become role models for society, and to feed it with constant positive energy, it is essential to "cultivate one’s virtue in order to be great."

Q: How can contemporary entrepreneurs cultivate their virtue for the greater good?
A：The value of an enterprise is in fact determined by the entrepreneur’s values.
The first step for an entrepreneur to cultivate his virtue is self-discipline, which means respecting one’s profession, its market, rules, and laws. The second is to respect the governance structure of your company, and avoid dictating or flouting that structure. Third, the more powerful a founder is, the more constraints he must place on his behavior, by keeping a cool head and being humble. That entails allowing small and medium-sized shareholders, as well as members of the board of directors and management, to express their will.

He led his followers to a profound understanding of the economic world. Thus, they will always be his disciples.

"Receiving the wisdom of both the West and the East, a pillar of the country, maintaining the integrity of a true leader, and a role model for all. Dong Fureng is a burning torch, illuminating the way forward for his disciples,” said Xiankang Dou, former president of Wuhan University, at the museum’s opening ceremony.

/ Commemoration·Growth
Year after year, a stream of visitors and memories
A picture symbolizing the soul refreshed graces the entrance screen: the small courtyard is framed by white, while a sculpture of Mr. Dong sitting and reading waits to be discovered behind a bamboo thicket. Words shaped as sea waves on the screen relate the site’s historical background, as well as the trend of economic thought as the tides of the turbulent 20th century began to surge.
The form aesthetics of the old residence are ingenious, preserving the listed brick-wood house while deftly portraying the hallmarks of Dong FuReng's life, his legacy to all who knew him, and the practical introduction of academic salons. We believe that passing on his ideas will carry them forward, to evolve and remain useful to future generations.

/ Meditation
Eternal peace in a moment of silence
The lobby features laser-projection shows, while the minimal language engenders a narrative aesthetic. PROL lighting design uses hidden lighting to invite exploration, through the active interplay of light and thought, truly appropriate for the residence of a great teacher; such an original use of light is meant to evoke a vicarious emotional resonance in visitors, while awakening individual memories.
The story and surviving artifacts of Mr. Dong's life unfold in the south corridor, measuring 27㎡. The simple camphorwood used in the exhibition frames add warmth, open frames of warm, pure red, bestowing upon the space a touch of fashionable modernity.
In addition, almost all displays are exhibited carefully, minimizing chances of harm to or loss of these cultural relics. The minimalism helps lend a spring-like quietude that refreshes both body and mind, a depth that envelops the entire space with a hazy poetry.
In 2007, the Bank of England put the portrait of Adam Smith, the father of classical liberal economics, on the £20 note. This year marks the third anniversary of the death of Mr. Dong Fureng, who made similarly outstanding contributions to the theoretical research and legislative practice of economics.

/ East-West
Art not only meets the requirements of beauty
But also the requirements of thought
The design of the arched gallery leading to the communication area on the second floor is based on the classical arches of Western architecture, while echoing the traditional forms of Chinese architecture, symbolizing Mr. Dong's Western educational background, followed by his 20th-century economic and academic achievements that blended the legacy of East and West.
This project deals first with the relationship between space, history and nature, forming a harmonious foundation for addressing personal relationships. Only in this way can the transition from old to new cultures be made smooth, filling in the missing memories on history’s timeline.
"Instead of being new and different for its own sake, we have striven to accomplish an authentic aesthetic that does not rely on complicated forms to compel," says Zhenhua Luo.
Commemorative places form cornerstones for both society and the human heart, growing out of the past to serve the people of today and the future. Therefore, such spaces are important for helping people find where they came from, and see where they are going.

/ The Stars
A place illuminated by light can be called a place of faith.
In 2014, the disciples of the Dong system collected and published "The Great Dao Zhizhen: An Anthology Commemorating Mr. Dong Furen", a collection of articles memorializing the teacher. and propounding his work.
Today, 64 doctoral students have sealed the objects, photos or manuscripts they most want to preserve and share in the same number of light-emitting boxes which, combined with resin technology, create an aesthetic of dialogue with Dong Fureng and his work.

/ A Torch
Solid, radiant
Design is the visual expression of inner life
The second floor is themed as an academic forum, a salon, unfolding before the central installation titled "The Grace of Dripping Water". A renovated study and the forum area are located to its left and right.
The words of Mr. Dong and his students hang under the beam, suffusing the forum with their meaning. Although none may ever again receive his teaching directly, those passionate about his work can still gather here to debate with vigor, and feel the master’s grace.
A particularly warm scene is comprised by two old armchairs, which the designer brought from Mr.Dong's former office, cleaned and restored together with several other old items to recreate the original atmosphere of the 17㎡ study.
Here, a sincere warmth replaces solemnity, inviting people to forget the intervening century, transforming scenery into sentiment, deploying objects as clear notes in the indescribable rhythm of emotions.

/ The designer says
In order to minimize damage, the first floor of the listed brick-wood building has been elevated by a light but sturdy historically-accurate, nail-free timber structure to make the structure moisture proof and hide the piping, while the AC hoods have been designed to resemble furniture. The elevated structure can be removed in the future, and the original floor renovated.
Young people walking on Xinma Road of an evening, the lights of the former residence playing upon them, a scene both commonplace and extraordinary.