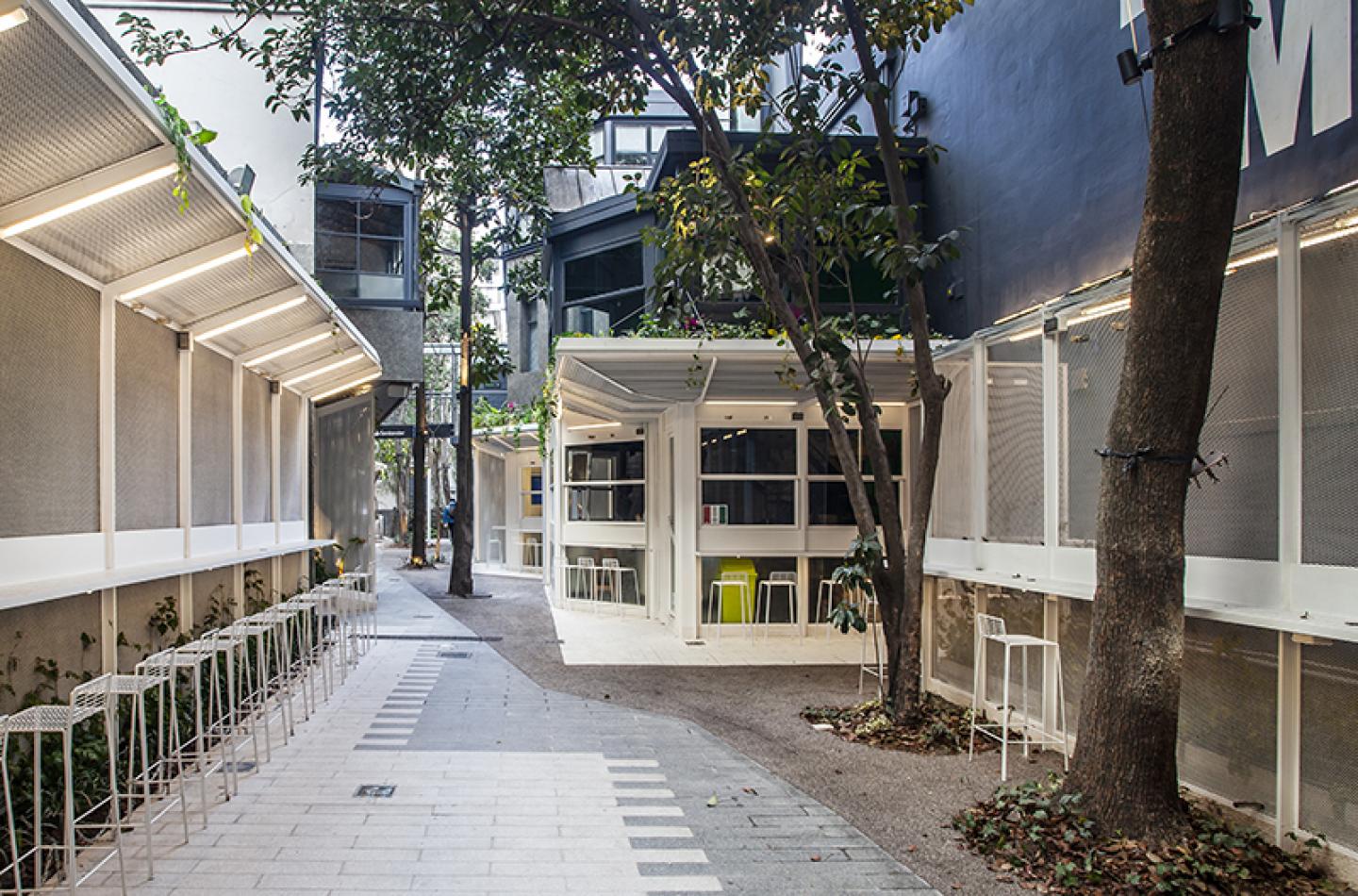 The Paseo la Plaza has always captivated us locals for its enigmatic urban space, whose language empathizes with the collective imaginary of the heterogeneous nature of a city, especially one like Buenos Aires.
As its name suggests, the prevailing emptiness, air and vegetation literally illustrate the identity of the square. Its alleys of cobblestones surround the theaters where each building has an identity that clearly emulates an old village. It is in this unique attribute so valued by the consumer where we analyze how we can integrate a new identity. An identity that should keep "Paseo la Plaza: The Square" as the main protagonist and "Manduca Market" as its necessarily integrated market.
This careful integration between both environments is translated into an element that we define with the name of " metal strip", one which constitutes the very identity of the market. It is a communication platform in itself and it conveys a contemporary, dynamic and integrated language throughout the entire length of its development. The Manduca plaza within the promenade also makes it a sustainable vegetation proposal.
The strategy has been to maintain the heterogeneity of its buildings in its tectonic and formal aspects while also homogenizing its volumes. To this end, we implemented dark tones so that the building that defines the new use as a market is differentiated not only by its light tones, but also by its tectonics.
The "Paseo de la plaza" walled building type, and the new building called "metal strip" is light and made of metal sheets. This piece rises from the ground level between vegetated flower beds, containing 10 facades of commercial premises designed as windows of the old sidewalk bars. Its furniture in front of the windows is resolved through the same language. Under the same porche language we have defined areas of common use for the complex's diners, as if it were a natural continuation of the construction system itself.
We proposed white flooring at the fronts of the venues as if they were their own sidewalks. Next, gray and then black generate a gradient towards a central organic figure that emulates a stream, unifying the green landscaped areas along the promenade. Its diagonal arrangement links the common areas on both sides of the market.
The large garden areas located around the tower perimeter have been intervened, allowing for use within them via a transitable and absorbent paving. There we placed new, cement-made organic figures to accompany the shapes of the garden areas filled with new native species.
On the first level we set up common picnic tables in front of the main theater room. This area is covered by two large tightened fabrics, under which a sort of garlands illuminates with a kermis-like code.
The first floor of the Manduca promenade was adapted with a restroom for the disabled, as well as a service elevator connecting the basements and first floors of half of the commercial premises.