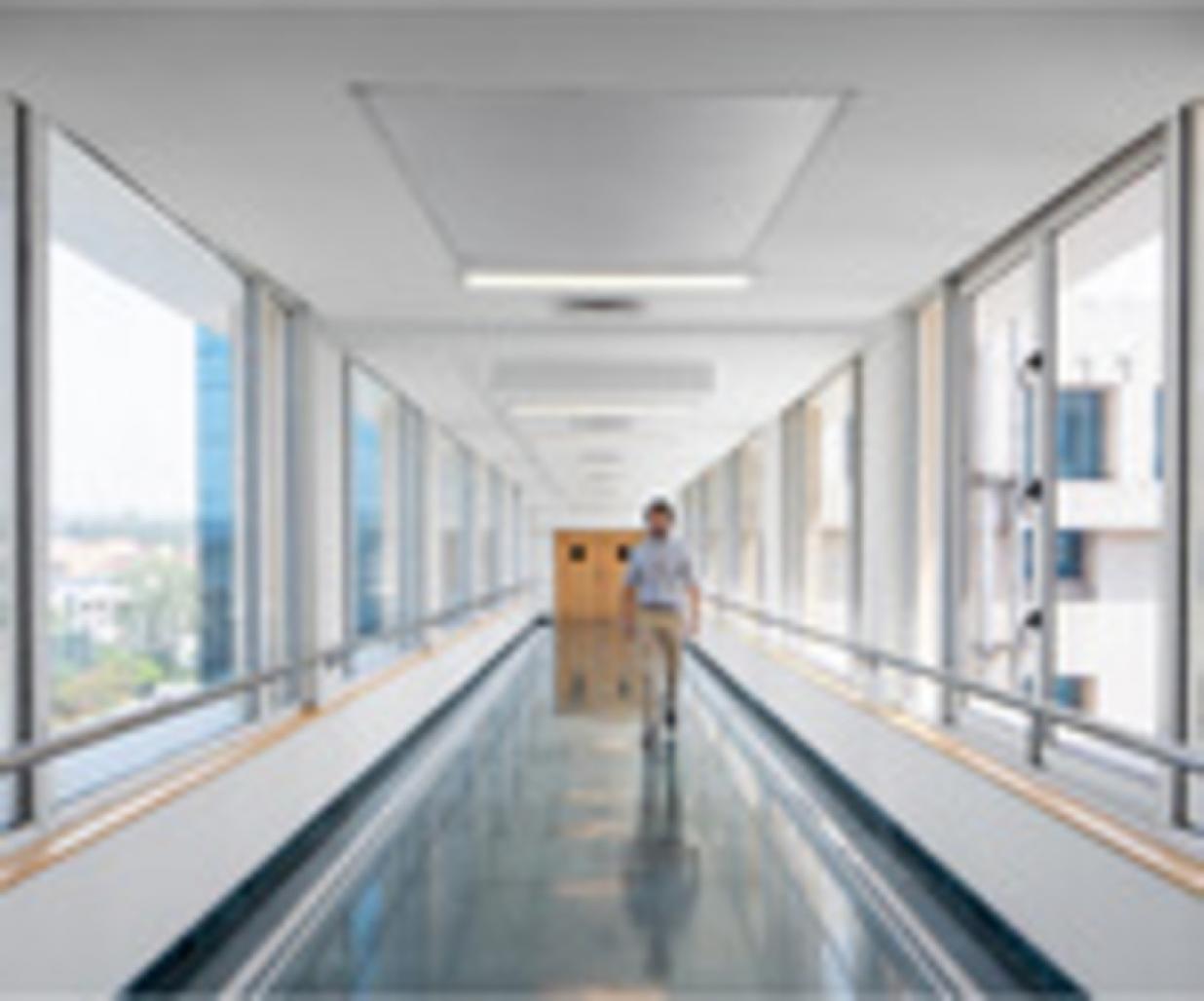 The most recent addition to Max Healthcare’s line up of Super Specialty Hospitals is the imposing new mixed-use facility at Vaishali, Uttar Pradesh. The new hospital, primarily oncology-focused, renders a seamless functional extension of the existing block, along with a highly responsive healing environment. Its location in a highly dense neighborhood, and within a very competitive healthcare hub of East Delhi, made it critical for us as designers to push the boundaries of patient care and satisfaction through design, to allow the new hospital to emerge as a beacon of contemporary healthcare in India. The new facility’s planning and interior rely heavily on principles of ‘Evidence-Based Design’ for more robust outcomes in response to its every planning move.

The two-and-a-half-acre tight-fitting rectangular site foresaw the construction of its first block, back in 2008 with about 200 beds and one basement pedestal for the future block. The basement housed two structural shells for its LINACs and some support services spilling out of its initial block. Even though the masterplan provided us with the extents for the new block’s envelope, it, however, also posed several design challenges such as insufficient parking space on-site to augment the anticipated built-up area. The existence of only one basement level dissolved any possibility of taking the parking garage below grade. This Led the planning team lead by Maninder Kaur and Mohanbir Singh to consider the possibility of a mixed-use tower with parking floors at the bottom followed by hospital floors above. This approach made it possible for the client to utilize the maximum possible FSI and add over 150 beds in about 145,000 Square feet of built-up area.

Design response and application of EBD

The new building’s footprint aligns 40 feet North from the existing block, making its South Façade almost completely deprived of natural light due to the existing block’s shading. This allowed us to zone out the South façade for circulation cores leaving the entire East, West, and North façade open for daylight penetration. On the planning front, the ground level houses the entrance lobby with an examination pod and some support services, followed by five floors of a parking garage. The actual hospital, however, begins from level six onwards which is entirely out-patient pods, followed by two floors of in-patient rooms. The top floors house the critical care units and operation theatres as it gives us a more flexible headroom to augment its Air Handling Units and Hepa-Filters. Another interesting characteristic of this hospital is the seamless connectivity of each level to the existing hospital, through ramped bridge connections, allowing the two isolated blocks to function as a coherent healthcare facility from a circulation and connectivity standpoint.


Max Vaishali also employs ‘Evidence-Based Design’ which is essentially the use of validated design moves to achieve better outcomes for a variety of healthcare design aspects. A notable instance of EBD in this hospital is the use of identical ‘examination pods’ in its ambulatory floor wherein standardized pods, each containing 5 exam room, one consultation room, and some support services, have been replicated to promote simpler way-finding for the patients and a much more streamlined staff operation, due to standardized location of every utility inside the pod.

A dialogue on the exterior, extending into the interior

The façade design attempts to exhibit the internal program externally. The parking floors are clad with white cardio graphic louvers, followed by a unitized curtain wall for the ambulatory floors and large punched windows for the in-patient floors above. The color palette mostly includes whites, beiges, and browns, also known as ‘Earth colors’ which is another aspect driven by EBD wherein researchers have found these colors to stimulate healing much more in comparison to other colors. This palette extends seamlessly to its interior with Max Healthcare’s patented green upholstery, creating an interesting contrast. The thoughtfully laid out floor plan secures abundant daylight to almost every programmed area inside the building. Additionally, every single departmental zone along with the waiting areas are adorned with large paintings, in vibrant colors and textures to uplift the spatial and visual ambiance of the facility and ultimately enhance the patient experience as much as possible.

Creative Designer Architects [CDA] is a multi-disciplinary practice based out of New Delhi. CDA primarily specializes in contemporary Healthcare architecture,
and the design of highly sustainable and responsive healing environments. Its work attempts to generate value in design and ideate a model that strikes an equilibrium amongst various stakeholders, including the built environment. CDA's highly versatile portfolio of over 120 completed projects boasts an elaborate line up of 65 odd healthcare facilities and a range of inspiring residential, commercial, and interior works.