Since we think that water is only ours, we build dams for drinking water, agriculture and energy. But these dams that we have built for benefit turn to us as damage. While water affects everything such as green, nature, agriculture, people, animals, and climate; dams affect water.

WHAT WE HAVE TO BE AWARE OF

The diversity of plants and animals in the area where the water is collected is die out. All kinds of agricultural lands, forest areas, historical and cultural assets in the region are flooded. The climate of the region changes and becomes temperate. There is a serious increase in humidity. Changes occur in the diversity of plants and animals in the region. The deltas of the river are died out. Salinization occurs in the soil. (Salted soil cannot be recycled to agriculture.) Dams even cause expensive fruits to come to our table.

Nobody realizes that these are the effects of the dam!

Today there are almost 6000 large dams around the world. And just one-third of the world’s longest rivers remain free-flowing. Over 1600 dams have been removed from US river in the last 100 years… For natural balance, from now on we need to begin to understand the damages of dams and let rivers flow.

We need to celebrate every single one of these dam removals. Every single dam removals project is very important. Because every single project is the result of partnership, collaboration, gathering and resistance.
This desire to bring back something very special. Whether it’s fisheries or clean water or all the things that rivers give us. If we can give rivers some room to do their thing that will lead to a healthier system for not only the river but for people too.

I developed a scenario through all these on Balçova Dam which is our project field.

Unable to bear all these damages of the dams, rights defenders, activists and the public start an uprising against the government. The Balçova Dam, which was built as a result of certain interests such as making more money and political concerns in the capitalist system and is currently not in use, is invaded by activists. Unable to withstand all these insistence and resistance of the activists, the government has to give the control of the Balçova Dam to the activists. They make this dam a symbolic triumph.

The first thing to do is to let the river flow. In this direction, the first big explosion takes place. Part of the dam is blown up and the river can now flow freely. After the first big explosion, a needed area of organization is created.
The next step is to drill the dam wall and the activists build the thinking wall. (As we remember from the Gezi Park Resistance in Istanbul, everywhere was full of graffiti.) People want to tell someone something. They want to attract some people and organize and make the resistance successful.

Afterwards, small explosions occur in addition to the big bang, new holes are formed to allow the flow of the river and cracks occur in the wall.

It has now become a place where the public, slogans, books and artists can move freely. Activists and insurgents have started to create their own libraries, their own working spaces. There has been a public screen where the people can write and exhibit their thoughts, and the people have now become insurgents and have created areas of organization.

All these movements have attracted the attention of the whole world, and this place has now become a symbol, a base of resistance...

PROBLEM DEFINITION
Students are asked to develop an architectural design project questioning the relation between the water and future of the city in İzmir. Can we develop a critical reaction against water problems through architecture? The subject was handled by creating a scenario by me. According to scenario; Balçova Dam which is our one of the field is invaded by activists and let them the river free.

FREE THE RIVERS by Hasan Güler in Turkey won the WA Award Cycle 35. Please find below the WA Award poster for this project. 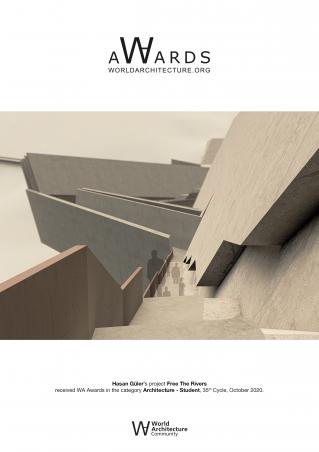