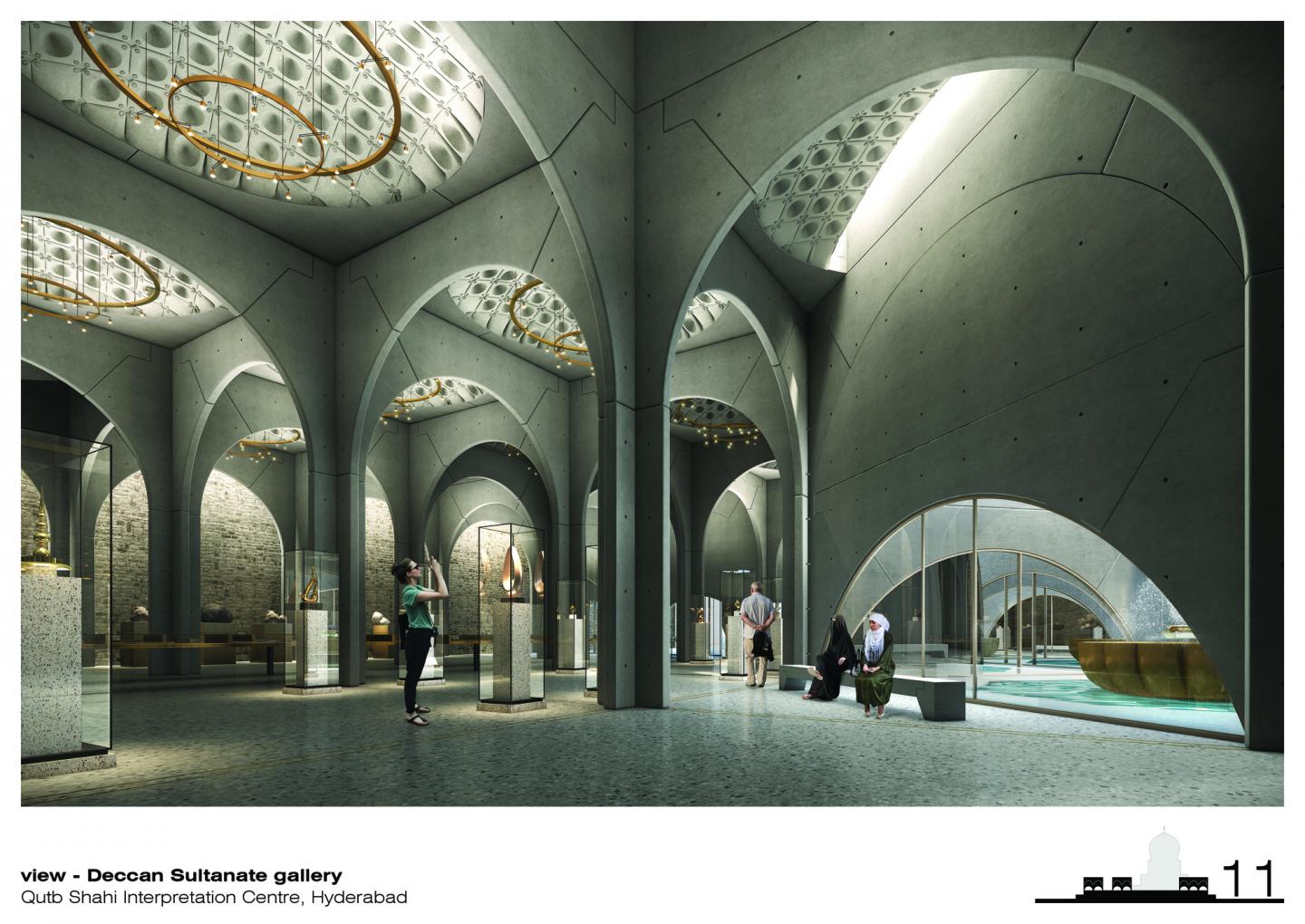 The Historical Context
Analysis
The vision of the proposed interpretation centre/museum is inspired by the experience of the monuments in the Quli Qutb Shahi Archaeological Park and the Golconda Fort, which emote a timeless quality through an interplay of geometry-structure, space-light, material-texture, scale-rhythm, and solid-void.
Medieval, and particularly, Islamic architecture have evolved over centuries an architectural grammar, based on development and refinement of modular systems of arches, tessellations and domes. Diverse building types were constructed traditionally, exploring iterations of an adequate module in response to a specific use, i.e. the Hamam, a linear building type or the tomb, a singular square based typology, universal in their nature. These archetypes in their techniques of form and efficacies, invaluable and inspirational, are integrated conceptually into the project.
The proposal deliberates on the impossibility of understanding the rich arc of historical value and essence of the given site and aims at reframing a fraction of its context by embodying the unique order of the existing architectural style.
It is an articulation of continuity and aims to present the values of an embedded process within the design of an independent yet interconnected, architectonic expression.

The Building System
Architectonic
The proposal attempts to contemporize this very planning & construction ethos, however reduces the overall weight as well construction time, by making use of presently available materials, precast technologies/techniques and engineering skills.
The derived framework made of detail precast RCC is considered for flexibility and a light imprint on the site.
Iterations of structurally and cost-effective singular module of 7.0m x7.0m, using compression-based building system of stacked precast columns, column segments, arched beams, shallow domes and green roof remain consistent with the diverse building programme, i.e. the multipurpose hall, restaurant, the ‘Finial Gallery’ and the ‘Model Gallery’, etc.
The module is presented as a device of exploration of histories, of organisation of planes, and of construction and materiality. By the virtue of its replicability, it adds up to a benefit of variety yet retains cohesiveness in the architectural vocabulary. Perceptually, a matrix of pavilions and punctuations is created in the enclosure that emphasises on the symbolic, the visual continuity with the context, but more importantly, a fundamental and functional harmony. On different levels, it characterises and occupies the enclosure differently – almost, as if the earth is carved or sculpted out in levels to accommodate the programme.
All single and double height modules have reinforced exposed concrete shallow domes, subdivided by multiple units of smaller structural domes in line with the overall load distribution.
This variation in surface introduces granularity to the otherwise smooth surface and creates an acoustical effect of diffusion that dominates over any convergent focusing from the overall dome shape and adds an ornament to the underlying structure and experience of space.

Design Principle
Synthesis
As the type and quantities of display are not known at this stage of planning, flexibility and adaptability of spaces are prioritised primarily to formulate an overall design strategy, which could be developed by a curatorial team at a later stage of planning, or incrementally on completion of project.
Thus, the museum design is focused largely on the interiority and the experience it generates. It is set in symmetry, largely abiding to predominant axes addressing specific uses. An index of layers is recessed into the ground, which work with visuality, perception, light, and spatial encounters. It is submerged into the ground and only double height spaces which are large, naturally lit, yet protected from rains, are seen as an extension to the otherwise subterranean exhibition spaces (Zone 2), along with the large embanked earth blocks, containing the existing protected trees, whilst giving identity to the proposed galleries i.e. Qutb Shahi, Model and Deccan Sultanate. Successively, the form provides the adequate heights for the larger artefact, i.e. Finial, large scale Architecture Models, etc.
The strategy of submerging buildings into the ground in hot climate zones distinctively favours/develops three efficiencies: it ensures reduction of energy consumption due to otherwise heat gain through large exposed surfaces, it moderates the quantum and quality of daylight, which generally is detrimental to the artefact, and it reduces the cost of construction by minimizing glazing areas. To sustain this approach further, earth cooling, a notably viable climate conditioning system for a public project and cost-effective since excavation has to be undertaken for development of the Lower ground floor (Lvl.-7.60m) or radiant cooling, are proposed along with efficient routing of services, ducting, cables and pipes below the compression based foundations, inspired by traditional methods applied in “Hamams”.
Ancillary supporting functions in Zone 1 developed as stacked single storey module, i.e. lecture/film halls, offices, service areas, washrooms, storages are organised as a necklace around Zone 2, servicing the galleries, the multipurpose hall as well the children’s areas. The latter are abutting the large active entrance court strategically, envisioned for future vernissage, children’s activity and performances with the broad staircase also facilitating seating for large gatherings. These allow for an independent functioning and regulate the noise to prevent any disturbance to the museum’s visitors.
A continuous ‘light incision’ along the threshold between Zone 1 & 2, illuminates the surfaces of local natural stone cladded enclosures and exposed structural concrete work and achieves the intended atmosphere of moving within an excavated ancient site.
The circulation spine – prominent paths and ramps, conceived as a part of the grand “promenade” through the galleries, are tied up with the visitors’ tour through the Heritage Park and through their continuity, provide a connectivity to the Restaurant, OAT and a small monument adjacent to the Centre and meander back to the entrance/exit
The anatomy of the entire complex is carrying forward experiences that inspired us to design of this complex, the Qutb Shahi Heritage Park, and which we started with.
The attempt is to build a narrative of an identity – of the making of a history, of an identity in transition and of belonging.

Qutb Shahi Interpretation Centre by matra in India won the WA Award Cycle 33. Please find below the WA Award poster for this project. 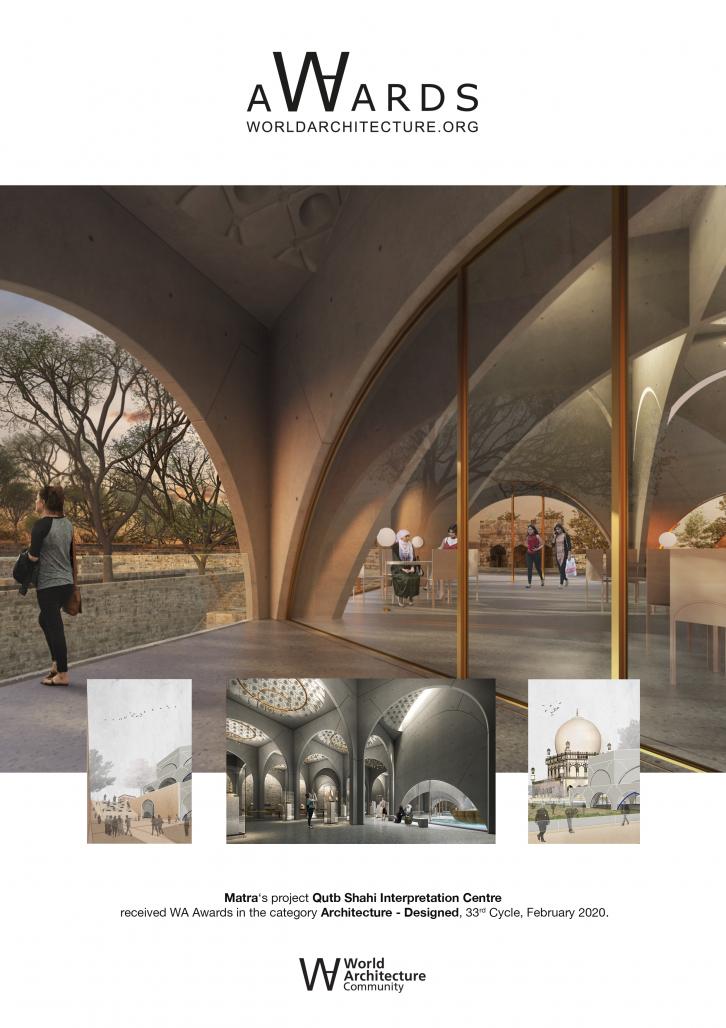