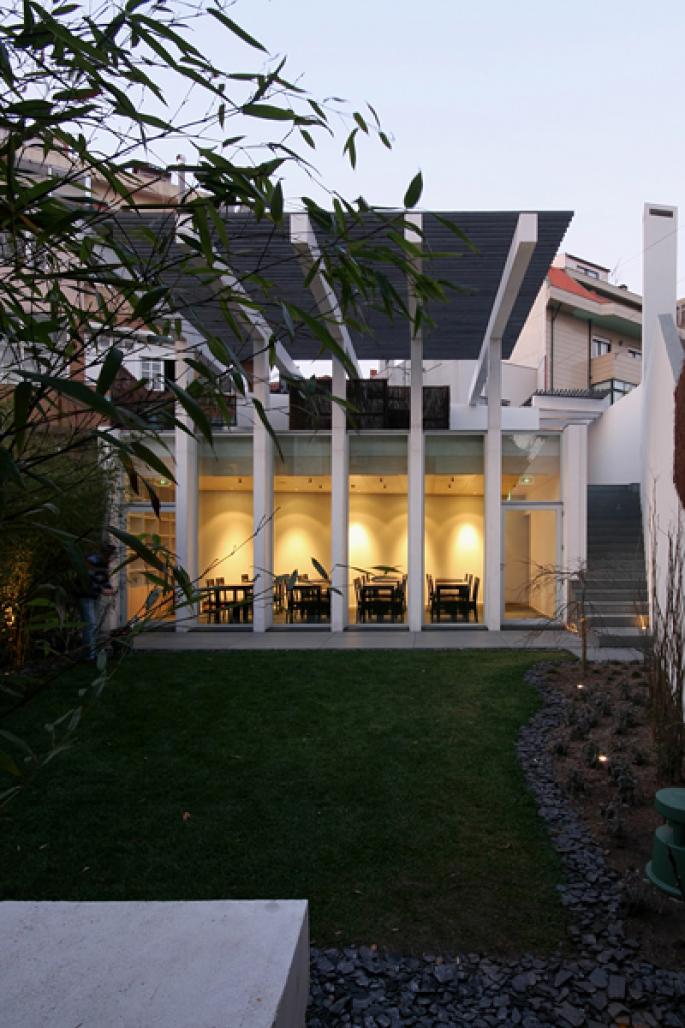 This work is located in the granite peak of Antas in the south side facing the valley of Campanhã. The toponymy evokes that in this place megalithic funerary monuments (Dolmens) will have existed, but this is one of the areas of Oporto city that more suffered with the successive transformations of the last decades, as, to point out, the construction of the new Dragon Stadium, inserted in the Detail Plan of Antas (1999-2003) designed by Risco, and the construction of the road junction of Via de Cintura Interna/ Antas, which occurred in the 80s of the XX century. This last process resulted in the demolition of the northern half of the Vasques de Mesquita Street and in the southern half only a part where the work is located resisted.

In the early 50s, it was here that the enthusiastic supporters of Futebol Clube do Porto met, to watch (from outside) the games offered in the former Stadium of Antas, now demolished, an authorship of the architect Francisco Oldemiro Carneiro. From this period there is also a house, designed by the same architect, at an early stage of review of the Modern, which is very rooted in the rocky outcrop, with the covering inverted roofs and surrounded by indigenous vegetation.

The Spirit of the Place was taken into account in the difficult union that can be established between the recent memory and the ancestral memory: the first, related to the game (natural bench facing a field where sporting events occur) and the second, which refers to the evocation of the missing megalithic dolmens (created by a gallery access, camera and flagstone of coverage on balance, supported on vertical bearers). Of this delicate union was born the intervention in the lot, that although depending on the street, it is mainly manifested in the relationship that looks to establish with the interior of the block, where there is good sunlight, varied vegetation and the garden of the surrounding house, previously referred to, through which you can see the landscape, cut by a staircase launched on the emptiness, in a diagonal line, that livens up the entire garden and the movement in the outer space. In this context, and regarding the dissonance introduced with the program, it was tried to respect the domestic tranquillity of the block and to evoke the current memory and the ancestral spiritual memory.

In an initial purpose of a functional restoration of the entire lot, the work includes the rehabilitation and the extension of an urban building of two levels, built in the first half of the twentieth century, as well as the landscape reordering of the garden. The interior of the existing building, in the ground-floor, was renewed for a restaurant and a new building was designed to a tea house, located in the plot where there was a dependency attached, demolished in the meantime. From the existent unevenness, equivalent to a floor, two links had been created, between the covered area, and the outer space, one in the outside, through the courtyard, and the other internal, through a gallery covered in the basement, where there is a garden enclosed by a hedge of bamboo.

The ground-floor is organized with an articulation between the adjacent dinning room of the restaurant, near the street, and the counter service area, closest to the yard that communicates with the garden. The area of movement, corresponding to the extension of the existing building, has an interior staircase that ensures abundant light in the basement gallery and the functional and spatial articulation between the two floors.

The new building of the house of tea, designed with a device in white concrete and black slate of Valongo, intends both, to evoke the memory of ancestral Dolmens and the bench towards the great game, manifesting itself in wide balance coverage across the light. This device is formally converted into a pergola that produces shade in the glazing and, in conjunction with and the building structure of the house of tea, fills the void of the lower volumetries, minimizes the impact of higher buildings nearby and creates a protected environment the might favour the stillness and contemplation.