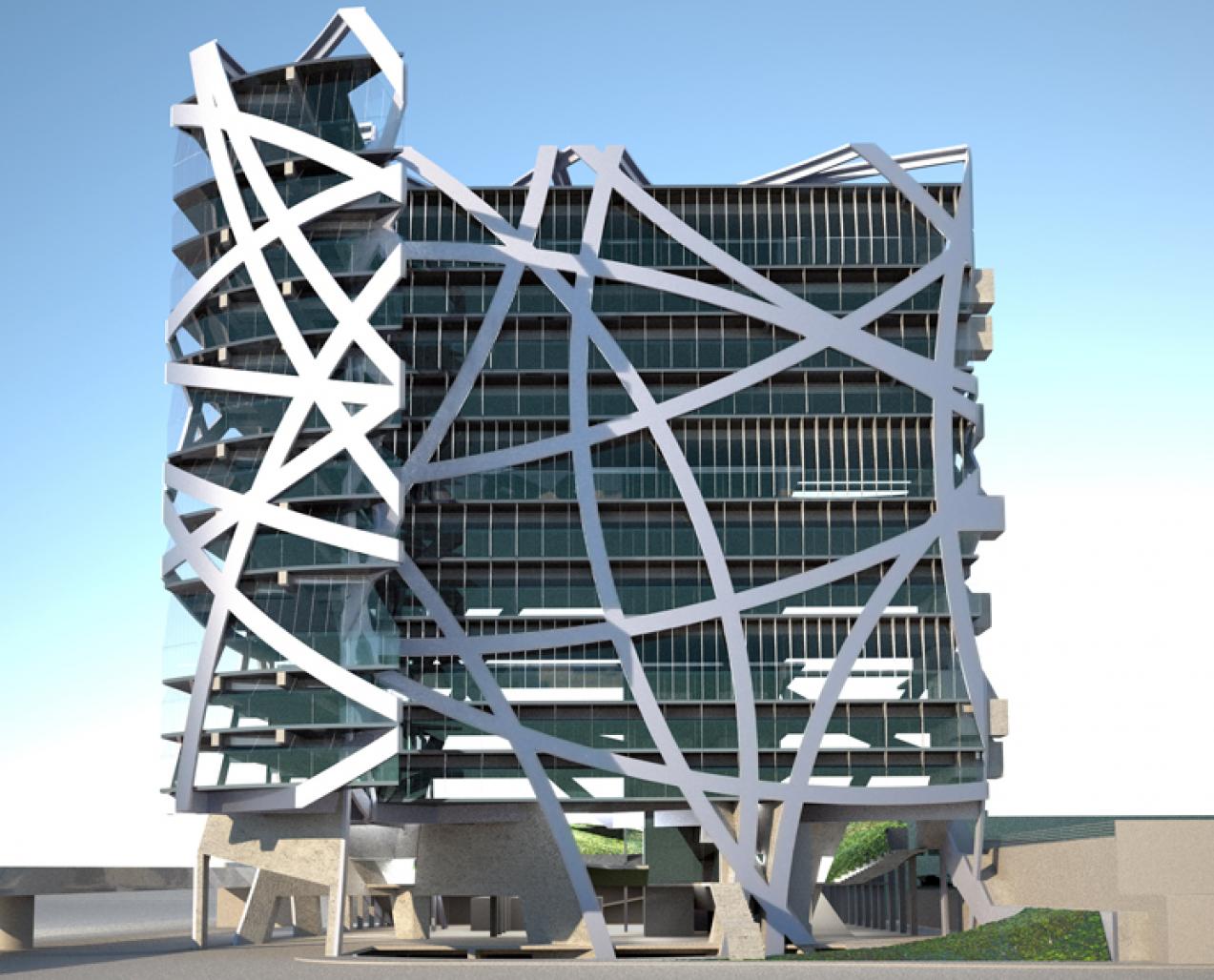 The Box is an intervention, an addition which modifies the organization and structure of an existing warehouse on National Boulevard in Culver City. The Box has three conceptual parts. The first is a cylindrical reception area located on the ground floor of the existing warehouse building, extending vertically to intersect the one-story, truss supported roof. The solid roof over the portion of the original truss roof structure, encircled within the cylinder, is removed and replaced with glass. The cylinder is positioned near a new front door from National Boulevard, and the space in and around the cylinder becomes a reception area. Behind a new wall just inside the cylinder in the reception space, a new, exterior stair leads to a second level roof deck, supported on the original truss system below, and suspended over the cylinder where the original roof was removed. The space between the new deck and the cylindrical incision in the roof is glazed, bringing natural light to the reception area. Up two additional turns of the exterior stair, halfway between levels two and three, the stairway becomes internal, and connects with an interior stair which leads up into the third floor Box itself.

The Box is a private, third floor conference space with corner roof/wall windows raised to eye level, preventing views of the local neighborhood streets, and allowing views only of the sky and the tops of the trees across the street in the park.

The Box is a hybridized version of the conventional, orthogonal box shape. The traditional geometric precept becomes an amended object which transforms the box to a still recognizable but not quite regular box shape.

The three-sided clerestory windows in the northwest and southeast corners that join the two Box walls and roof are themselves box analogues, positioned on opposite corners of the conference space, opening the corners to views of the neighboring trees and sky. The two three-sided clerestories, when added together, form a theoretical glass box.

The Box - reception, deck, and conference room - is one material and one color, an almost black cement plaster both inside and out. Roof, interior and exterior walls, and ceilings are a consistent, smooth, steel-troweled surface. No material distinctions are made from roof to wall and none are made from the inside surface to the outside surface of the building.

The Box itself is lifted on steel legs which lean to form the conference room floor support beams. The beams are positioned as two planes that cross as an X in plan, with a spherical cut-out in the webs of the two beams in order to provide clearance for occupants on the open second floor desk below the Box and above the reception space. The Box appears to roll on a steel sphere.