How can ancient cities benefit from the UNESCO world heritage badge and simultaneously avoid becoming a ‘Walt Disney’ for tourists? 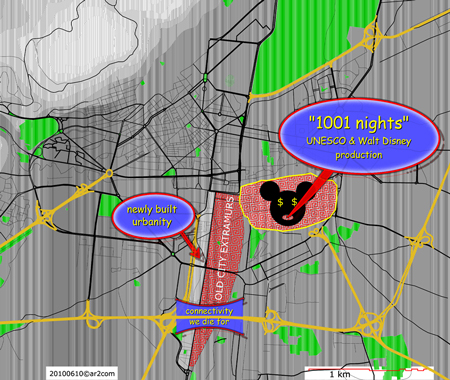 There are fears that the UNESCO world heritage badge is being used to start a marketing campaign, based merely on capitalist standards. The common requirement for a rapid return on investment (ROI), however, leads to rapid development and rules out slow-growing and steady sustainability – and deprives local people of having a say during the city’s ‘rehabilitation’. In fact, here we don’t deal with rehabilitation but with reconstruction similar to a set stage fit to serve photo sessions by tourists.
Figure 1: ‘Damascus Barcode’
As to the Walt Disney reference, this was the general concern in an urban design studio at PAR. To simplify the theoretical task we chose the following UNESCO sites: Damascus, Syria, for the winter term 2008 / 2009 and Sana’a, Yemen, for the winter term 2009 / 2010 (still in progress). Understanding is the main base for a sustainable design in foreign cultures: learners – teachers, designers – researchers, locals – professionals, and so on are all communicating directly using all possible web 2.0 achievements. The students learnt how to access research communities and the local Damascene community to work out relevant propositions, which place(d) themselves in between ‘urban acupuncture’ and ‘slow urbanism’.
Our final presentation in Damascus proved this working method ideal and effective.