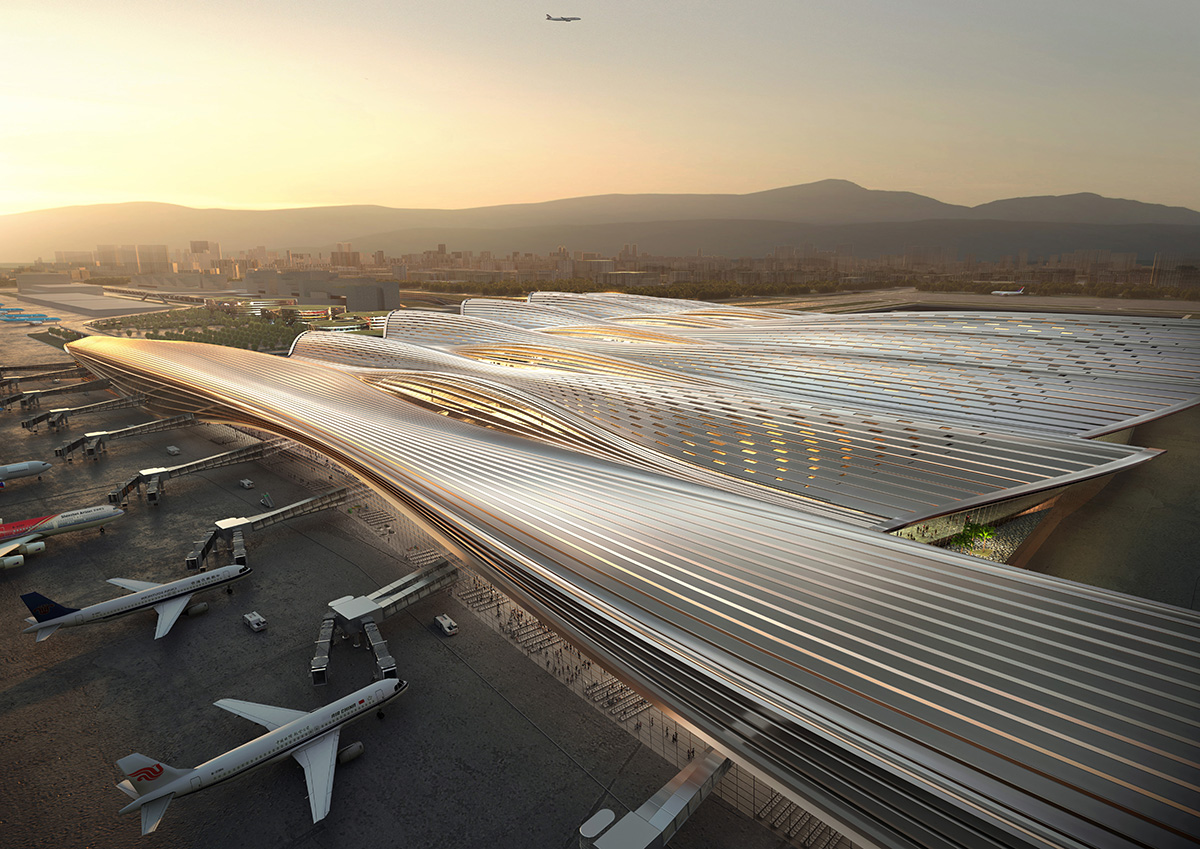 The competition was organised by Shenzhen Airport Co. Ltd and selected the team of Rogers Stirk Harbour + Partners and CNADRI as the winning design.

The structure is designed with undulating roofs that are linked to each other and the roofs feature streamlined openings for air flow.

The team will work with infrastructure consulting firm AECOM and Railway 2 on the project, the new terminal will be developed as an extension of Shenzhen Bao'an International Airport and have connections to new transport infrastructure.

"The design concept has at its heart a 10,000 sq m central garden space, the size of 40 tennis courts. The garden acts as the front door to Shenzhen connecting and integrating ground and air travel," said Andrew Tyley, Partner, RSHP.

As RSHP explained, "the terminal will be at the centre of a new ‘airport city’ and will be a landmark portal through which thousands of people pass every day."

Described as "a state-of-the-art terminal" for Shenzhen, the building will have a particular focus on passenger experience in terms of wellbeing and sustainability.

"Reflecting this forward-facing dynamic city and region, it will become part of the lexicon of next generation airports," according to RSHP.

The entire frontage to the terminal is conceived as "a city scape" rather than a traditional front door to the terminal. Stemming from the interior central garden, the building will offer a network of landscaped pathways leading to the airside and landside as well as transportation connections within the terminal.

The architects transformed the traditional relationship of the forecourt of the terminal into a new city orientated environment. The design scheme prioritises these internal movements and connections into streets and avenues where buses and trains provide service to a kerb street.

"I am always impressed by how architecturally engaged our clients in China are with the whole design process. I like to think that our success is because we are great listeners and that our projects not only provide our clients with what they need but do so in surprising and exciting ways," said Simon Smithson, Partner, RSHP.

"We have worked in China for three decades and are delighted to have won this prestigious competition to design a new terminal at Bao’an Airport. This is an airport that celebrates the hellos and goodbyes in a natural environment at its heart. These are the emotional moments that, despite the ever-increasing speed of our daily lives, remain important to us as individuals. It is a building where passengers’ wellbeing and pleasure are at the heart of the design," said Ivan Harbour, Senior Partner, RSHP.

The building will focus on a number of key sustainable design principles within the building's compact form. The building provides an optimal surface area to volume ratio in order to maximise the use of natural light whilst controlling solar gain.

The project will include extensive vegetation, displacement ventilation, low water consumption including rainwater harvesting and a significant proportion of off-site prefabrication.

RSHP stated that they will implement these strategies as well as designing an efficient plan, equipment layout and the promotion of integrated public transport connections will all serve to minimize the building’s energy consumption in use.

"It has been an honour to work with such a strong team, successfully sharing design ideas and decisions, resulting in the most satisfying teamwork experience with overseas practices. We would very much like to thank RSHP for all their trust and support. T4’s design, with so many original innovative ideas, will definitely be a new benchmark for all future terminals," said Bingwen Ren, Principal, CNADRI.