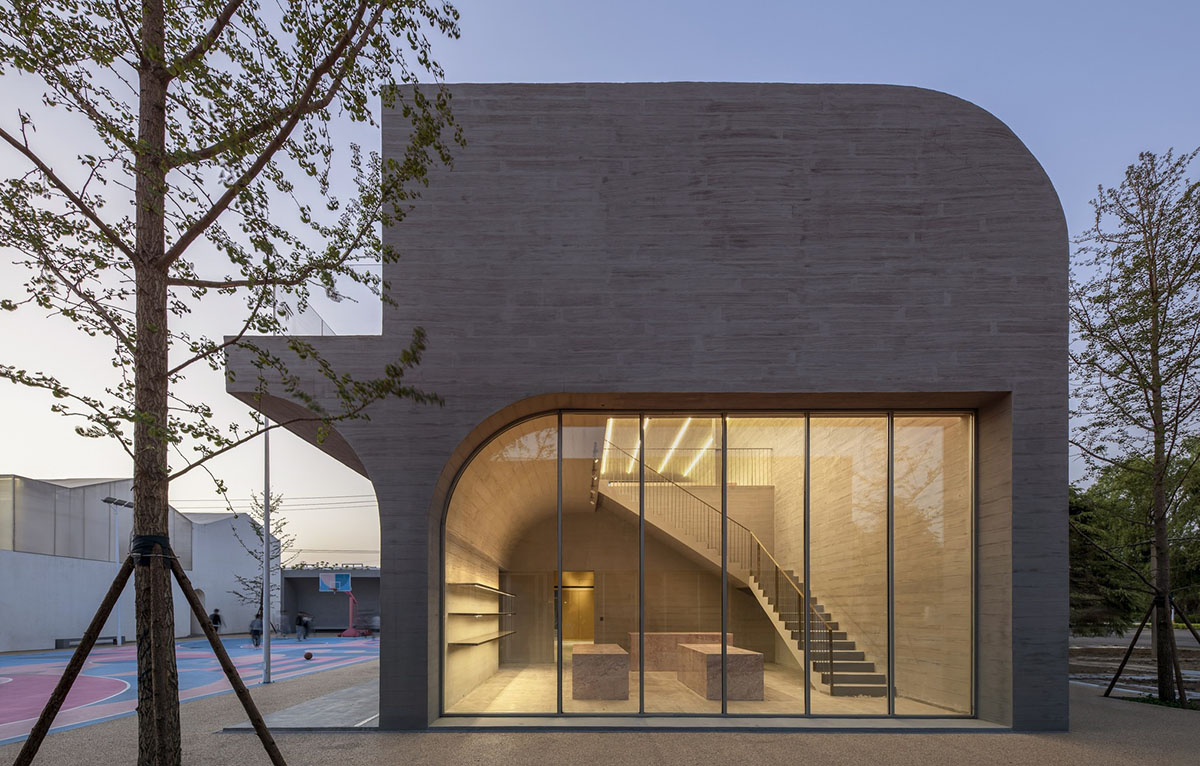 Named The Qinchang Village Town Hall, the 892-square-metre complex is comprised of low-profile three buildings that complement each other in a harmony. At the center of the complex there is a basketball court that activates the center. 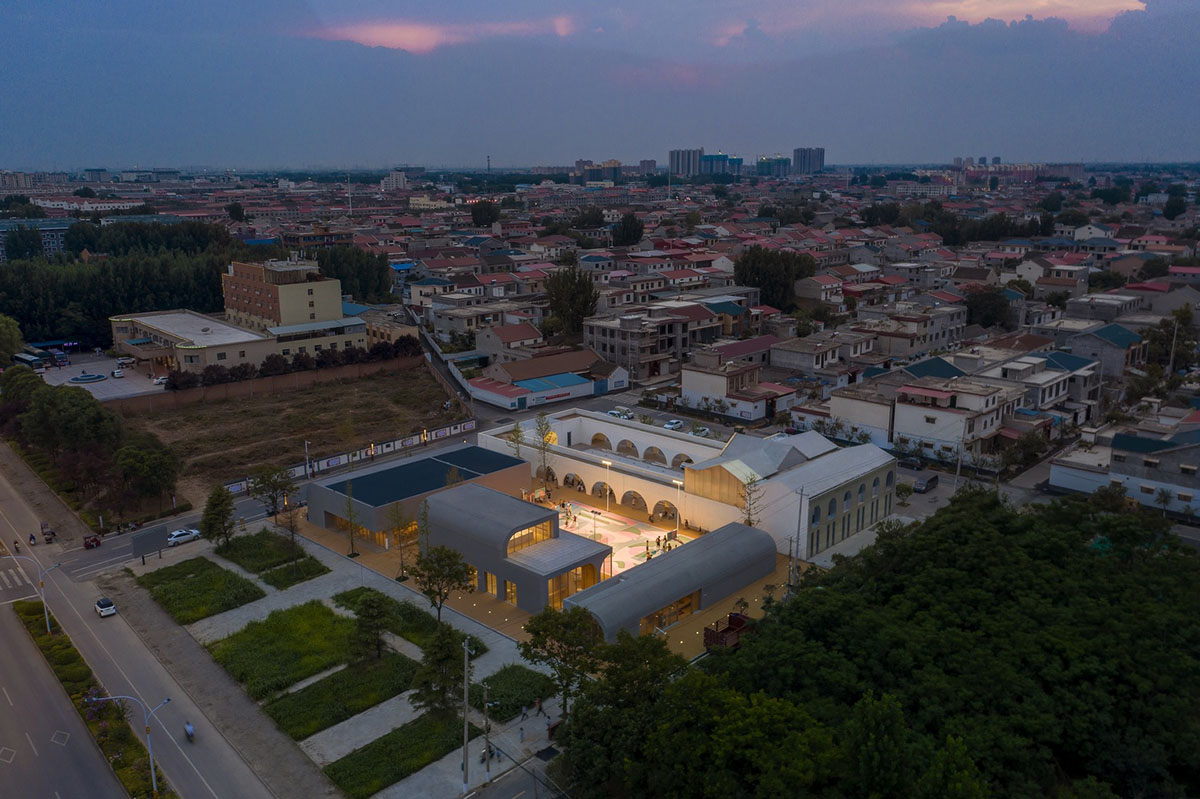 While Phase I on the west side accommodates mostly non-profit community services programs and ceremonial spaces, the east side complex accommodates small local businesses as well as cultural and recreational programs, including a shop selling local farm produce and handicrafts souvenirs, a small café, a restaurant, a gallery as well as a children’s library. 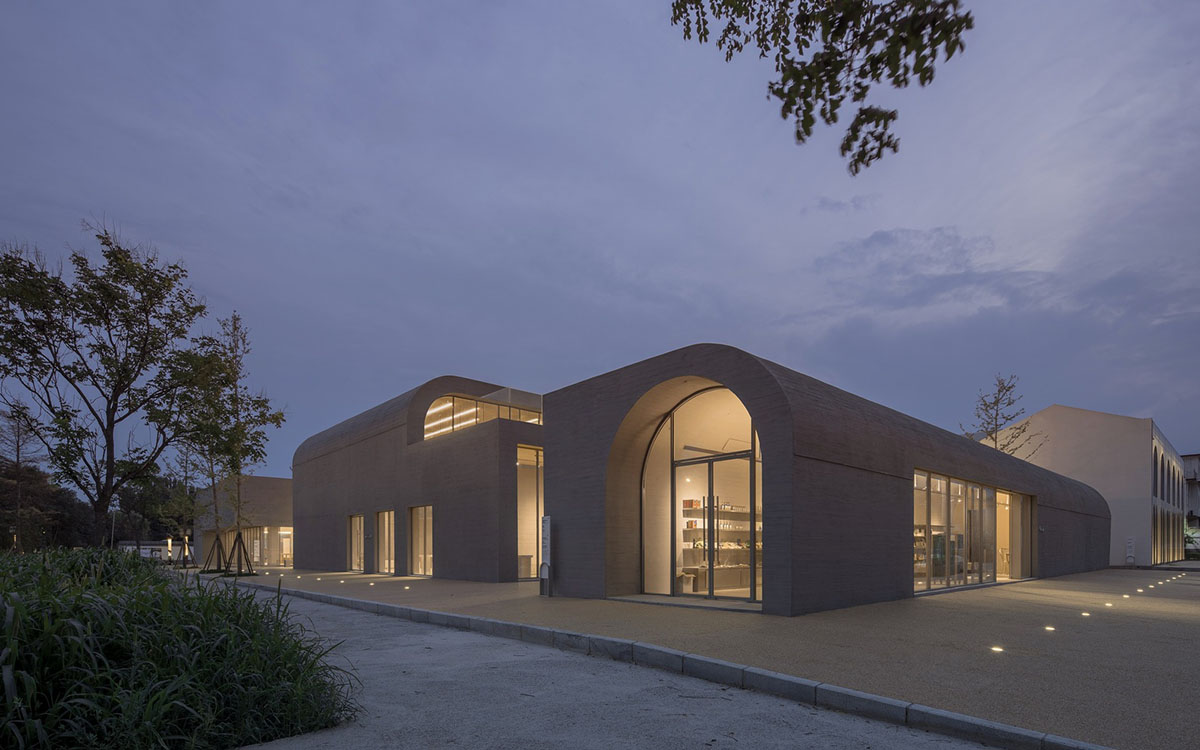 The space in the complex is both a medium and a "generator" to create potential employment and start-up business opportunities for the villagers, exploring an “innovative and sustainable" model of the economic and cultural revitalization of the rural communities.

The firm arranges a layout on the east side that adopts a courtyard-centered configuration strategy from the west.

On the other hand, opposite to the symmetrical and ceremonial layout of the west plot, the ambiance of the Town Hall on the east side was aimed to be more intimate, earthly, and effortless.

In the overall language of the project, the architects divided the massing into three volumes which are composed of one/two-story small-scale buildings. The complex was created as an asymmetrical layout and are set out at the three sides of the site so that they define the street interface. 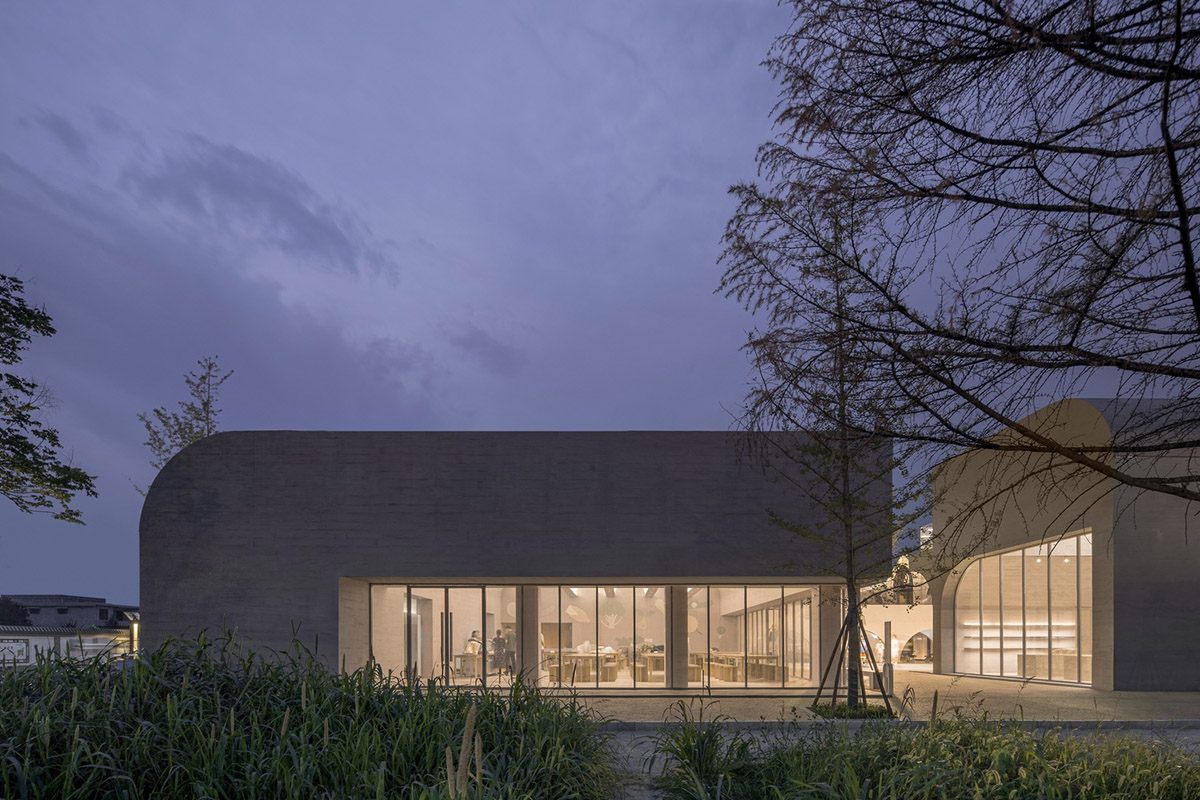 Restaurant at the Southeast Corner

A central courtyard is naturally formed by these three individual buildings and it interacts with the west side cloister-style one, continuing and reinforcing the porosity and accessibility from the west: openings in-between all of the individual buildings allows villagers to access or pass-through the site conveniently. Entrances to the courtyard between buildings

The central multi-functional open space also provides villagers of all ages with a place for social and recreational activities, which complements, balances, and enriches the tranquil, ceremonial ambience of the West Courtyard.

The single-story restaurant is designed as the largest massing which is situated at the southeast corner of the campus, remaining closest to the village main street. 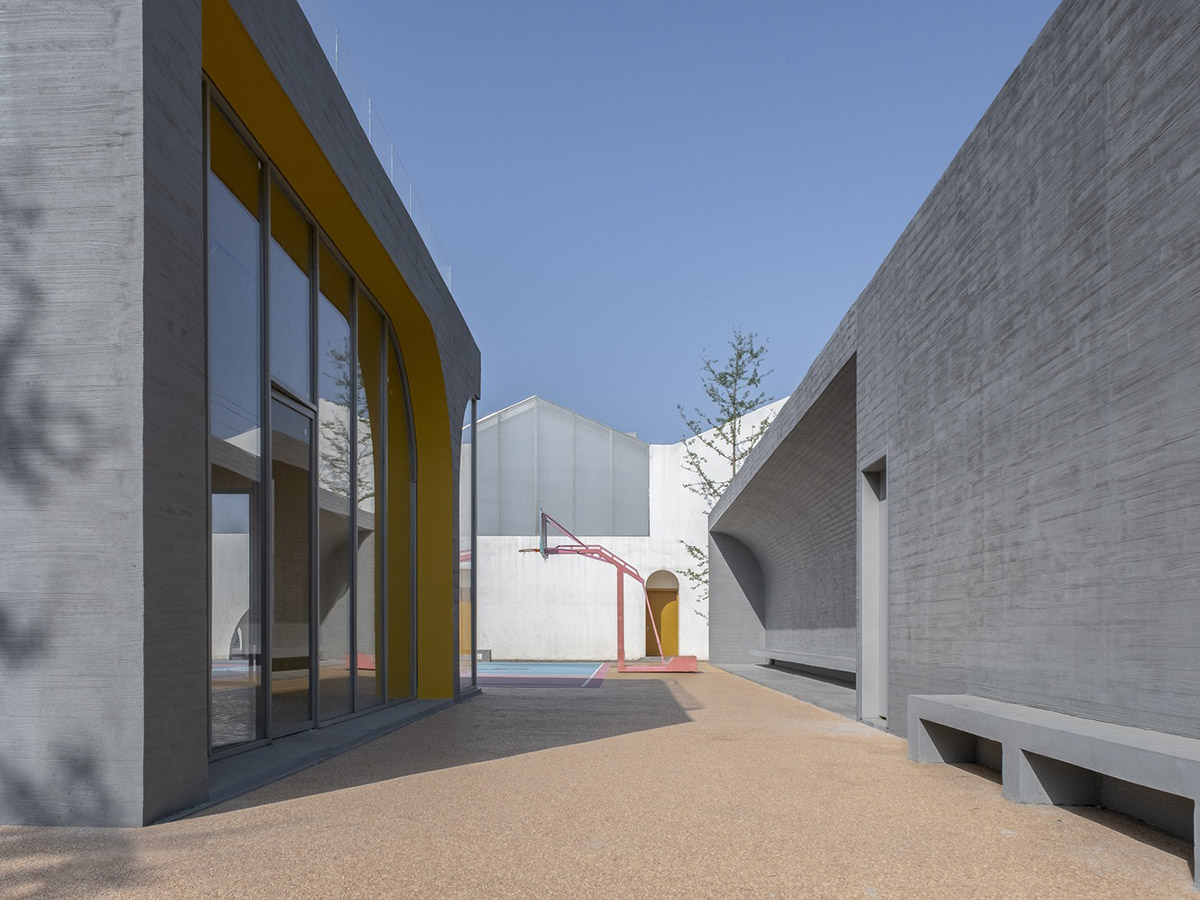 Entrances to the courtyard between buildings

"Normally it is the village canteen that serves both villagers as well as tourists, while on special occasions, it can host large-scale events such as traditional wedding and birthday banquets," said Studio 10.

"The two-story building on the east side has a small gallery that opens up to both the street side and the courtyard, a library/reading room where children can scan QR code through the smart system to borrow books, as well as a café where tourists/villagers can take a break or hang out." 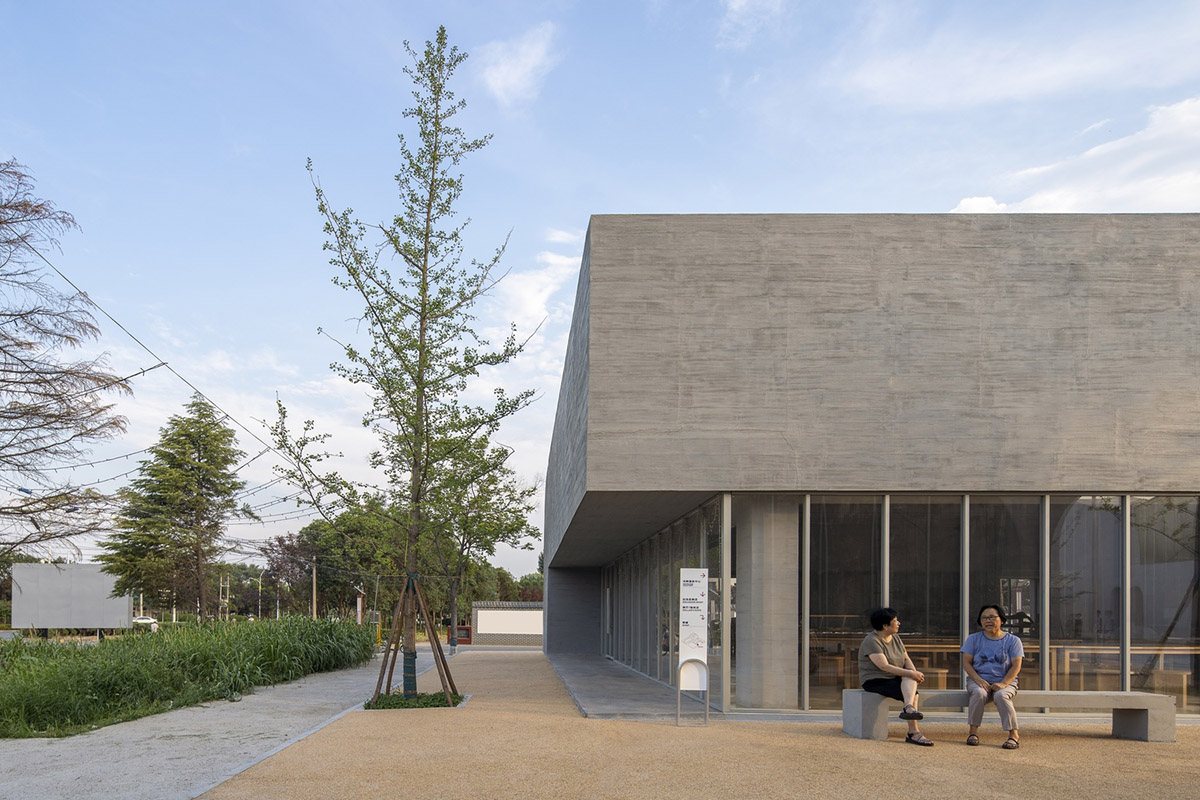 Restaurant of the largest massing defining the southeast corner

On the north side, the firm designed a bar-shaped single-story building that serves as a store for showcasing and selling local farm produce as well as handicrafts made by villagers.

The store is directly placed at the south façade of the building and facing the courtyard, a covered arched porch with benches can serve both as spectator seating area for basketball games as well as be transformed into a natural stage backdrop for large-scale outdoor public events held in the courtyard. 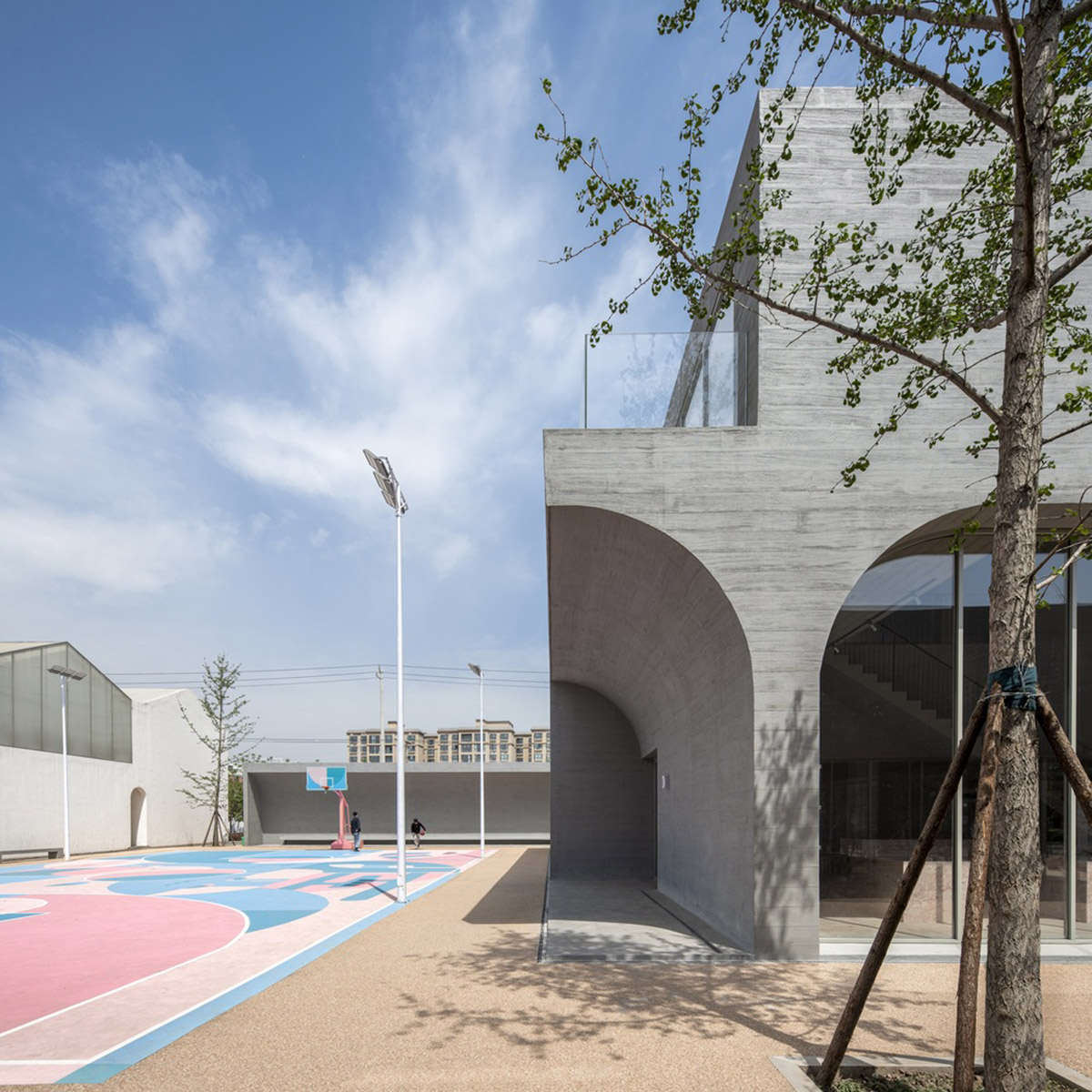 "When surveying in Xiuwu, we found that all public basketball courts, regardless of their conditions, were highly appealing to villagers, especially teenagers; in fact, the basketball courts in the villages are almost always occupied except for during extreme weathers," added the studio.

"Therefore, we suggested to the client to add the basketball court in the courtyard at early stage of design. Even before final project completion, the basketball court has become extremely popular among young villagers. The benches in the arched porch as well as the rooftops of the western archway and eastern gallery building naturally form spectator areas, providing vantage points for villagers to watch basketball games." 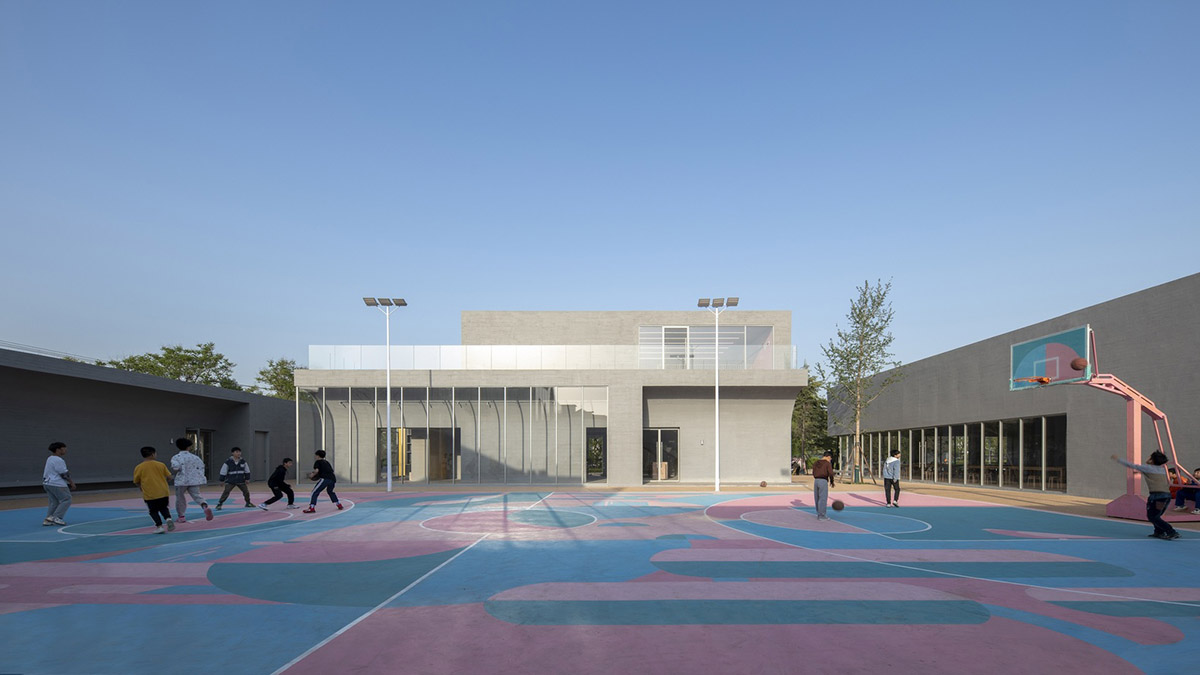 "In addition, this basketball court painted with pattern created by the graphic designer has also become one of the most important outdoor public gathering and event spaces in the village."

"In addition to hosting wedding and birthday ceremonies, it can also be transformed into spill out space for the restaurant, accommodating traditional outdoor wedding and birthday banquets for the seniors, where all villagers can dine at the same time," added the firm. 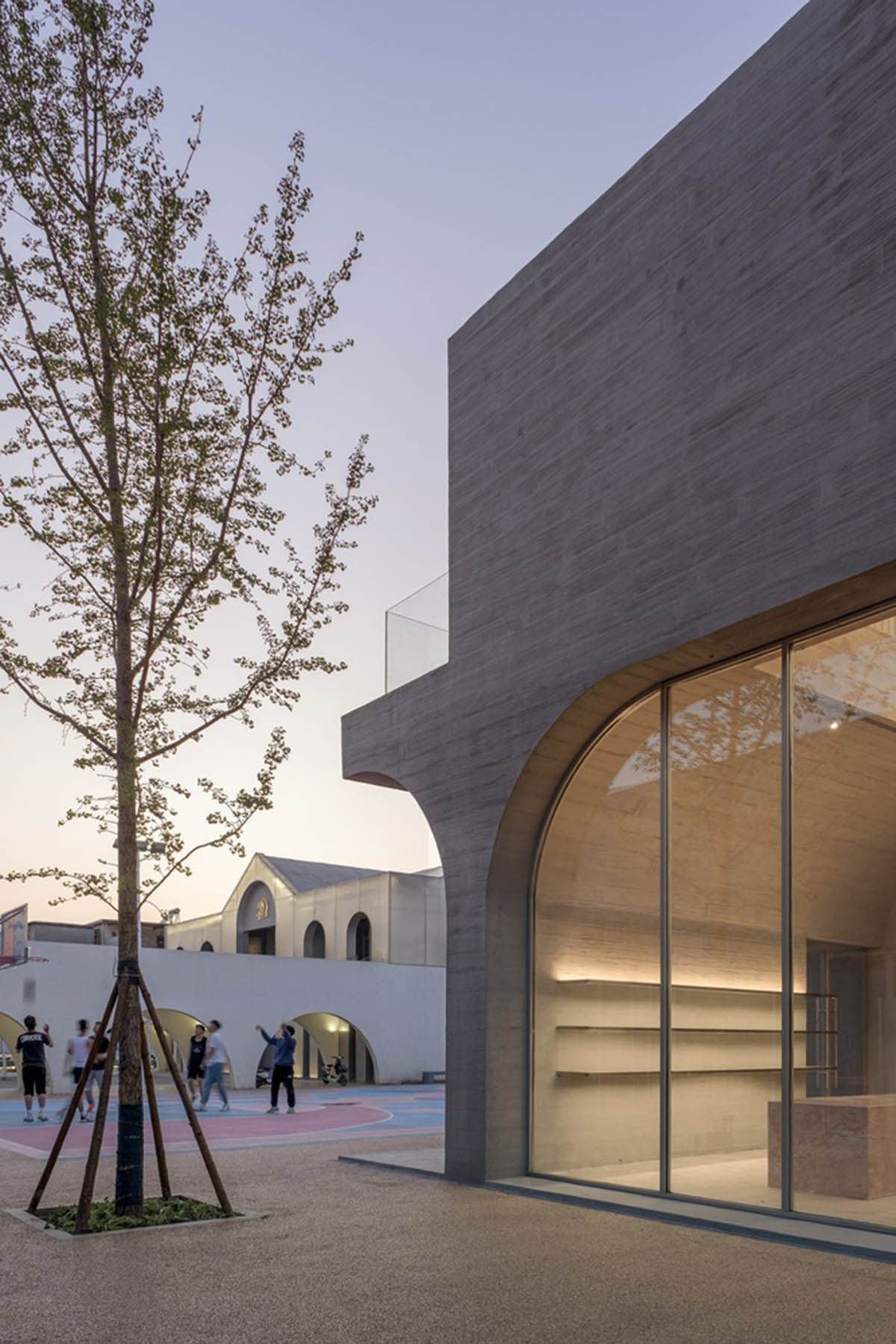 Extended porosity from the west site cloister throughout the courtyard

The building is made of by using cast-in-place concrete structure. Corresponding to the CPC Community center on the west side, the Qinchang Village Town Hall features a distinctive geometry and motif of arches, since these motifs are typical component in the local traditional semi-underground dwellings. 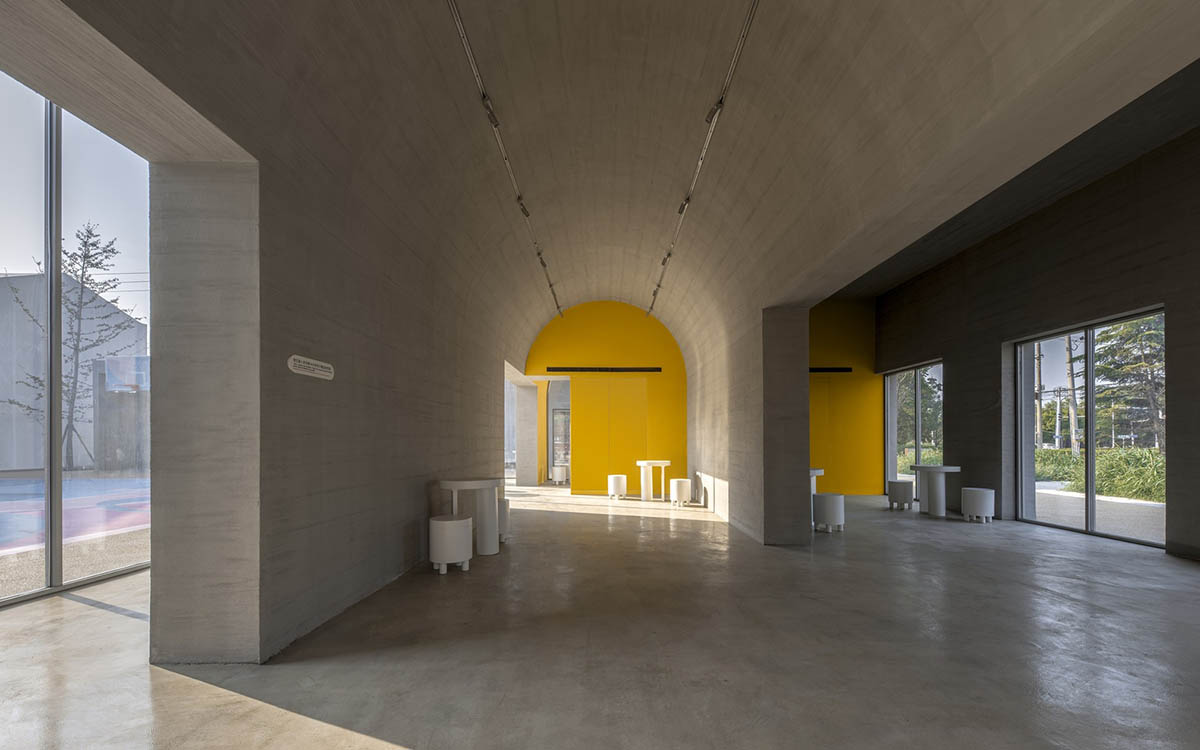 Based on the geometric prototype and modules previously set up in the west side, the architects abstracted and evolved arches from planar ones into vaults, catering to various spatial and programmatic needs of the Town Hall. 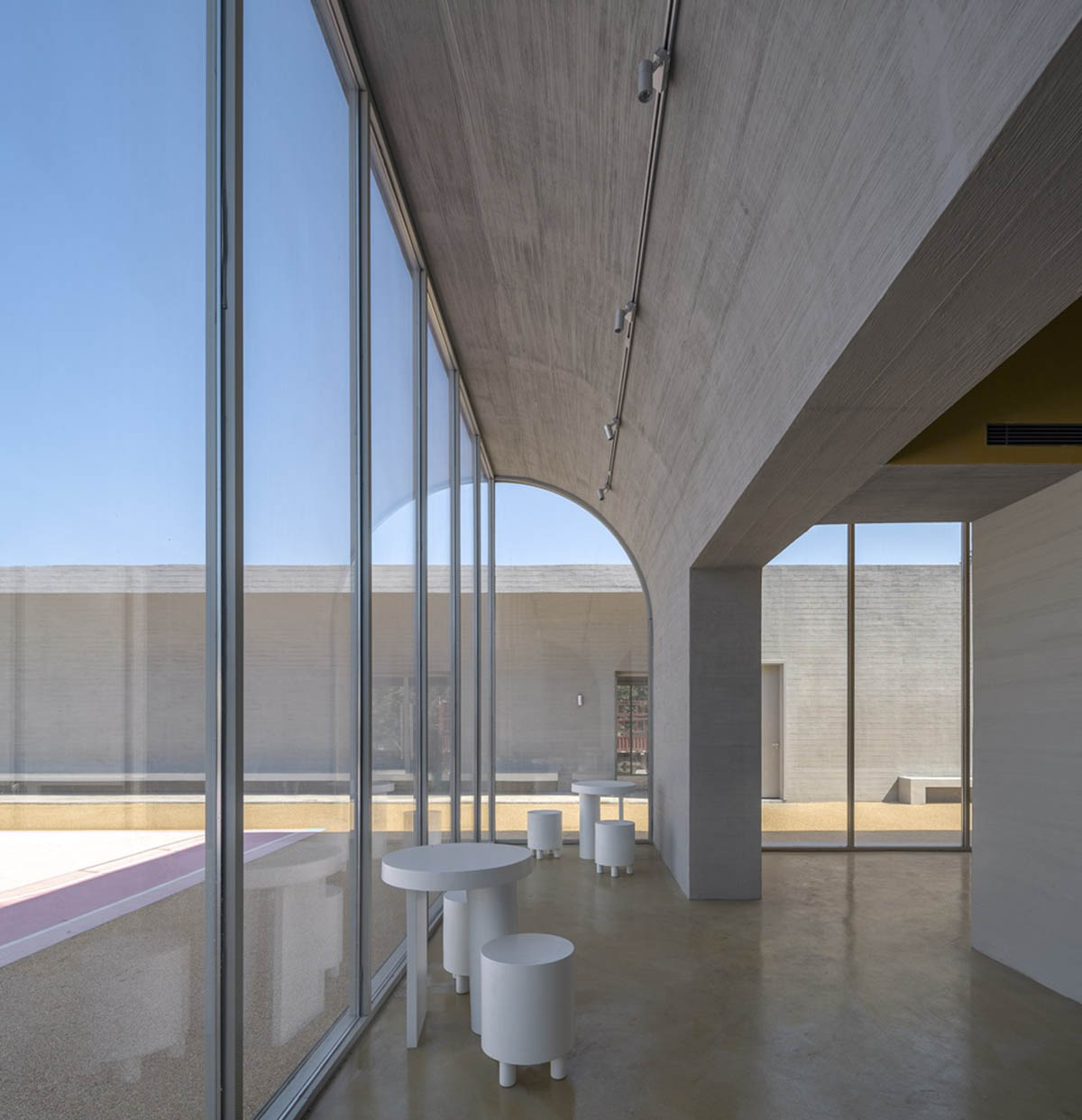 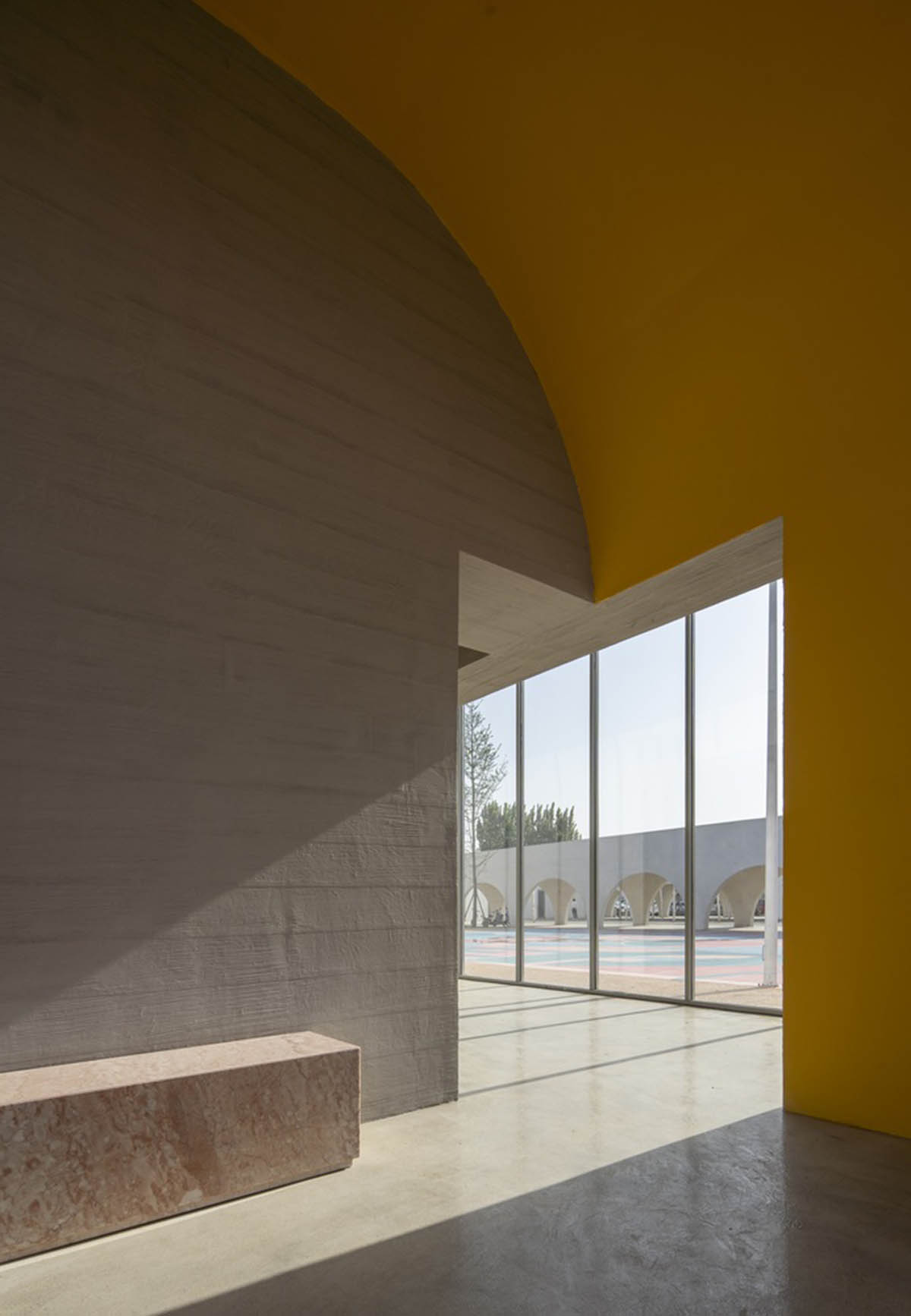 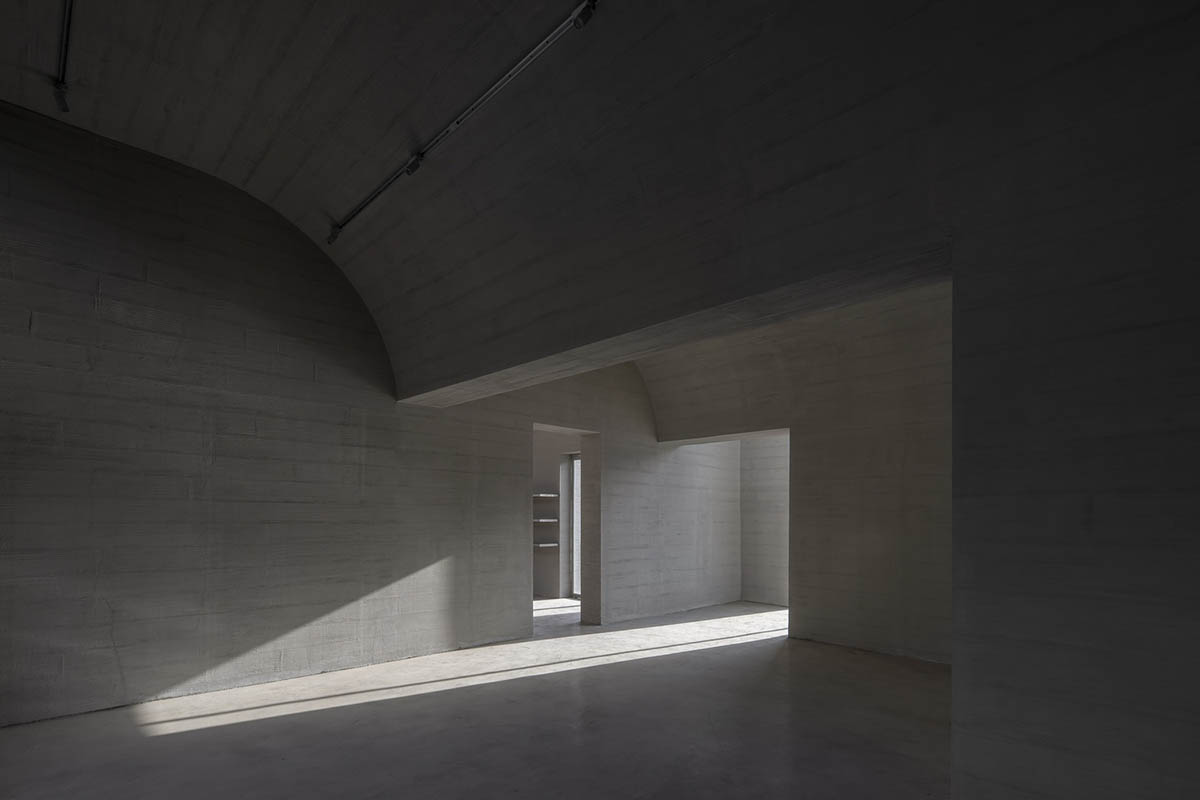 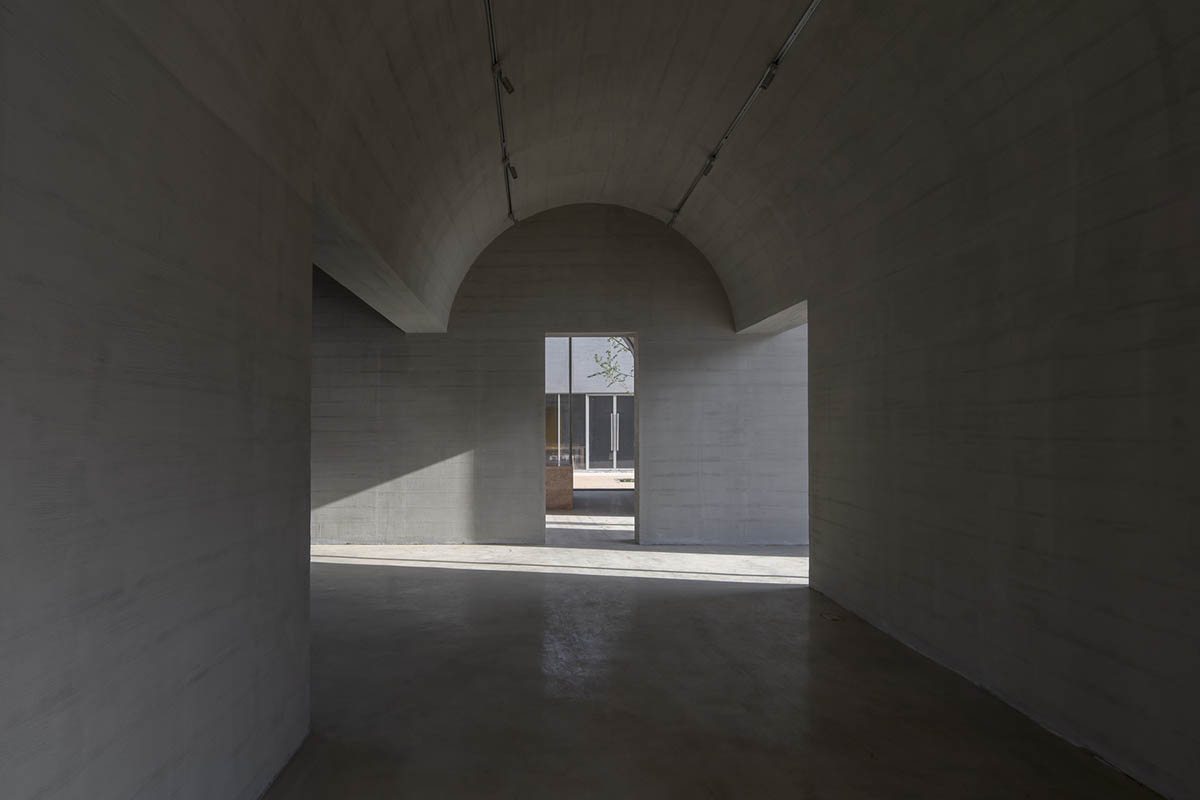 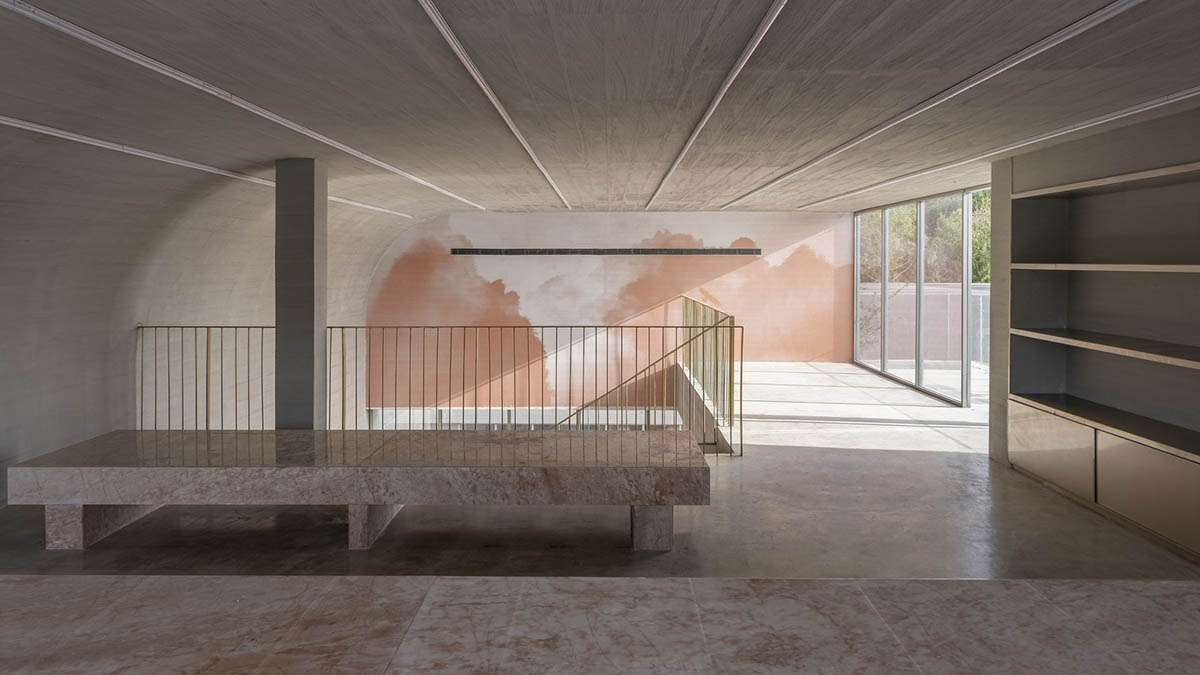 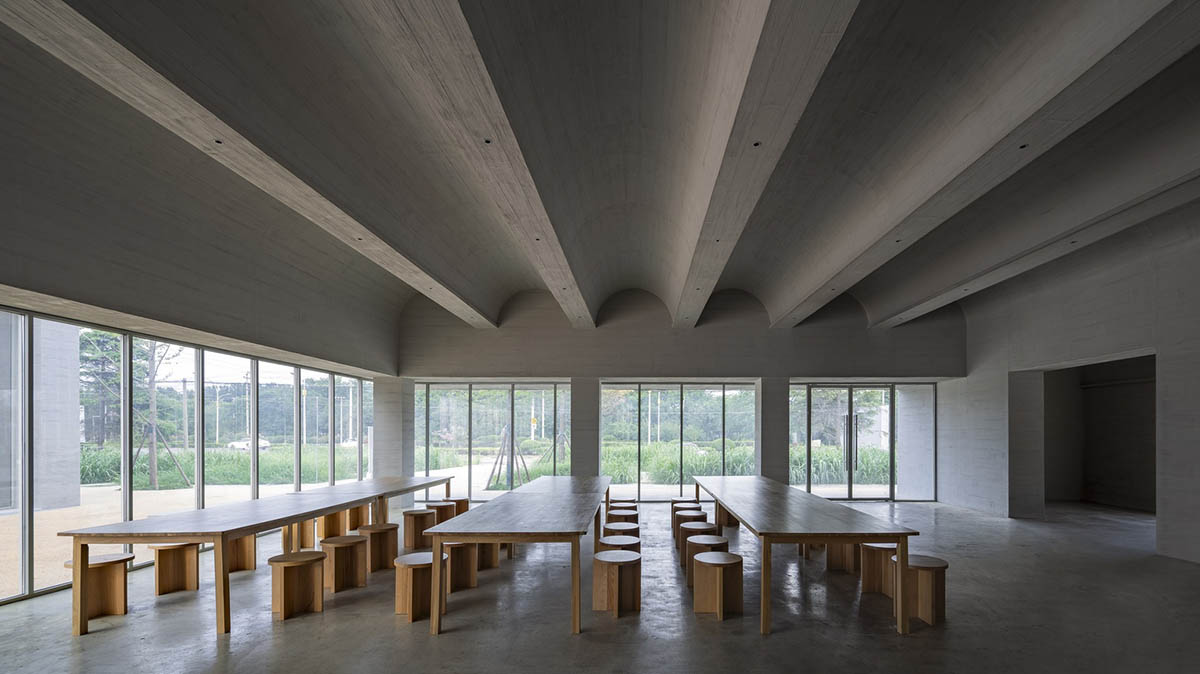 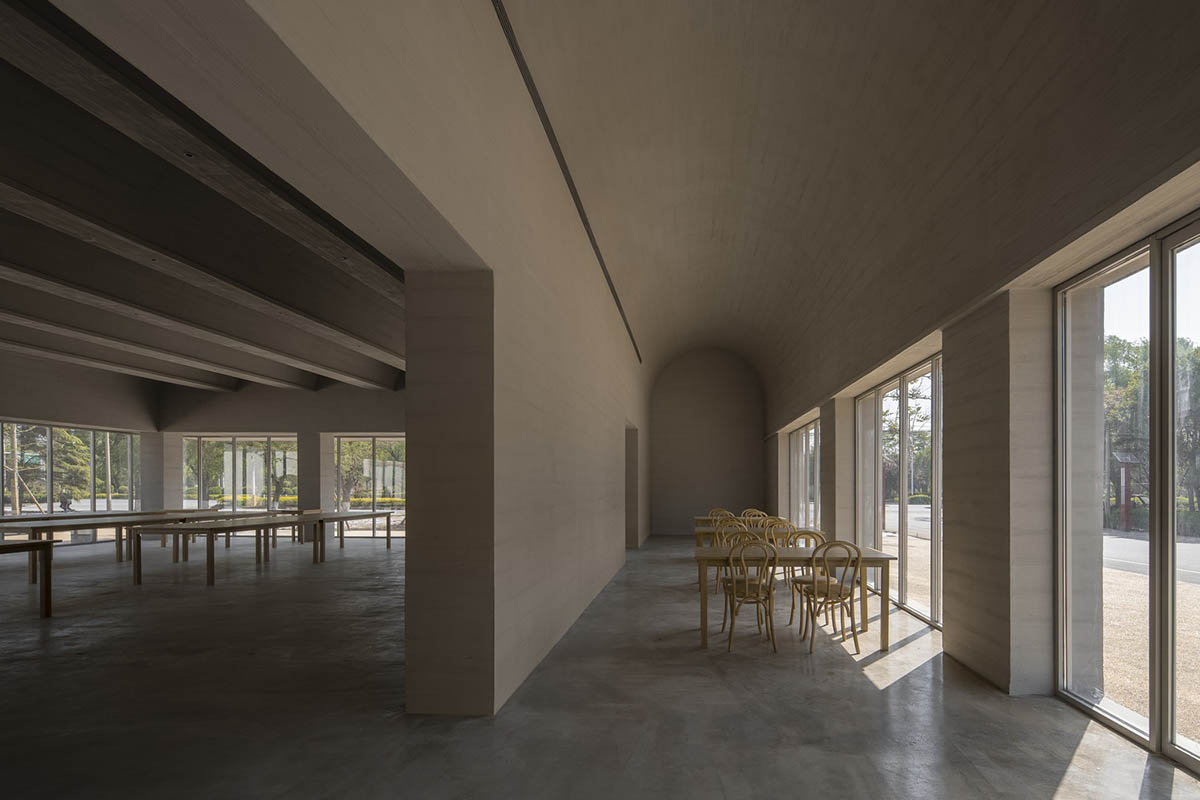 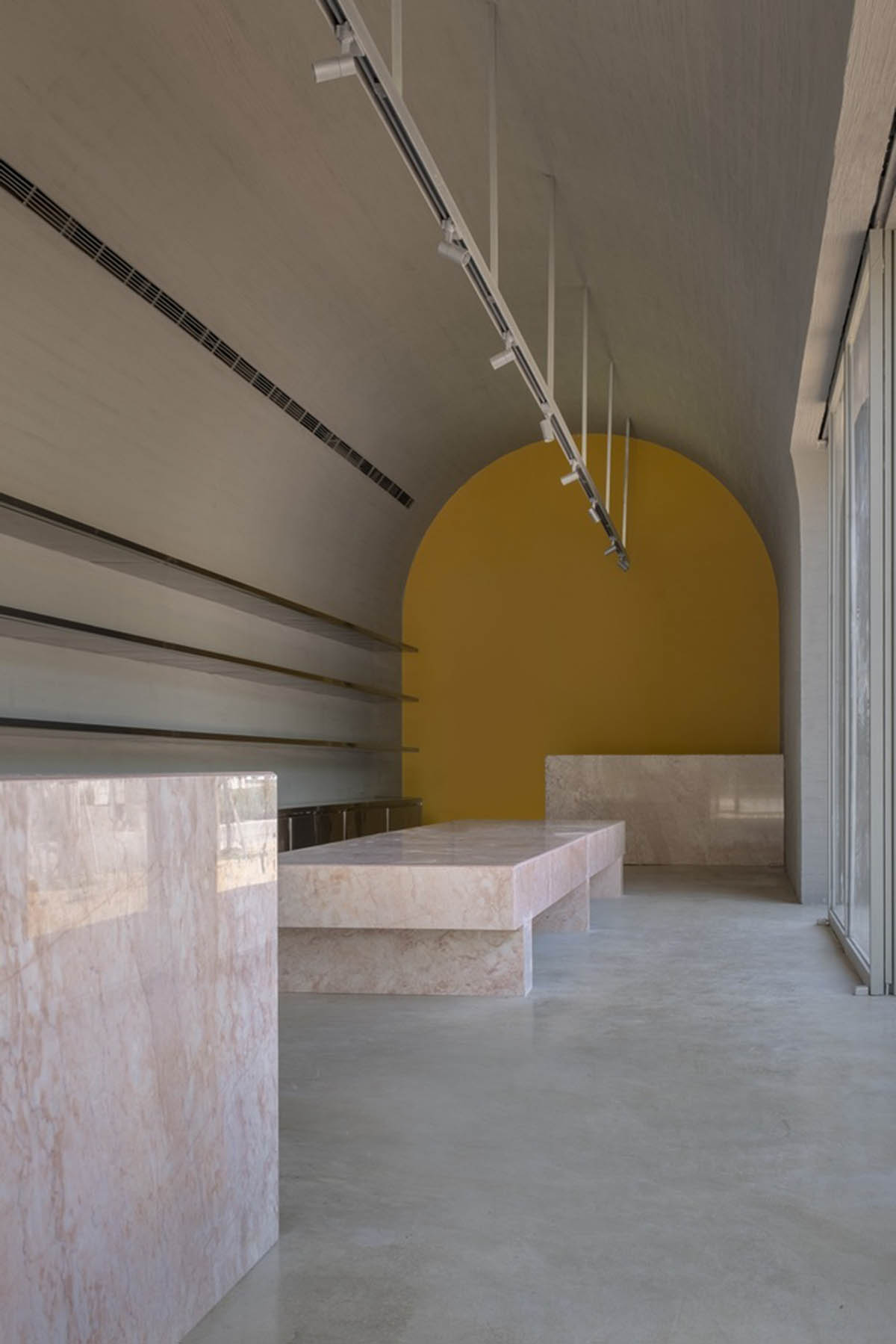 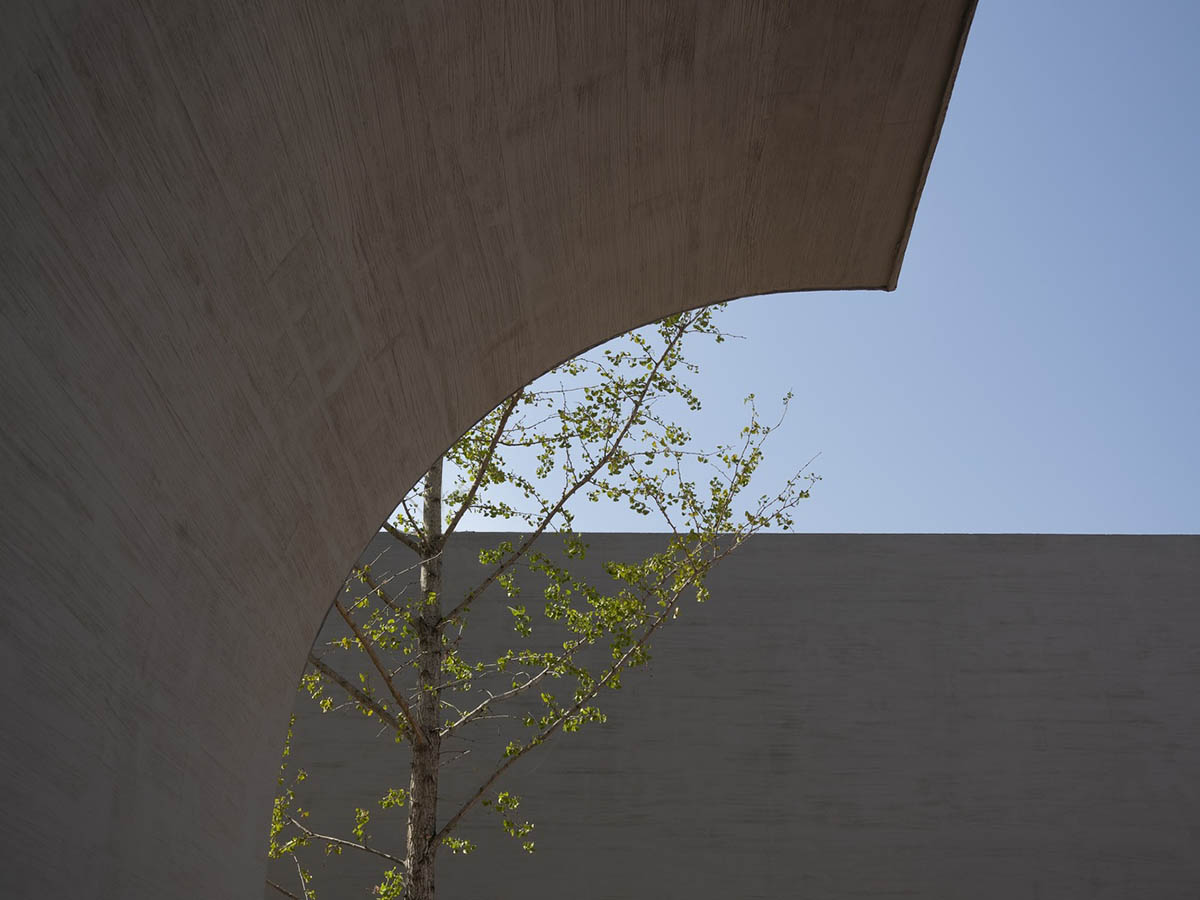 The geometry motif of arches extracted from local traditional residentials 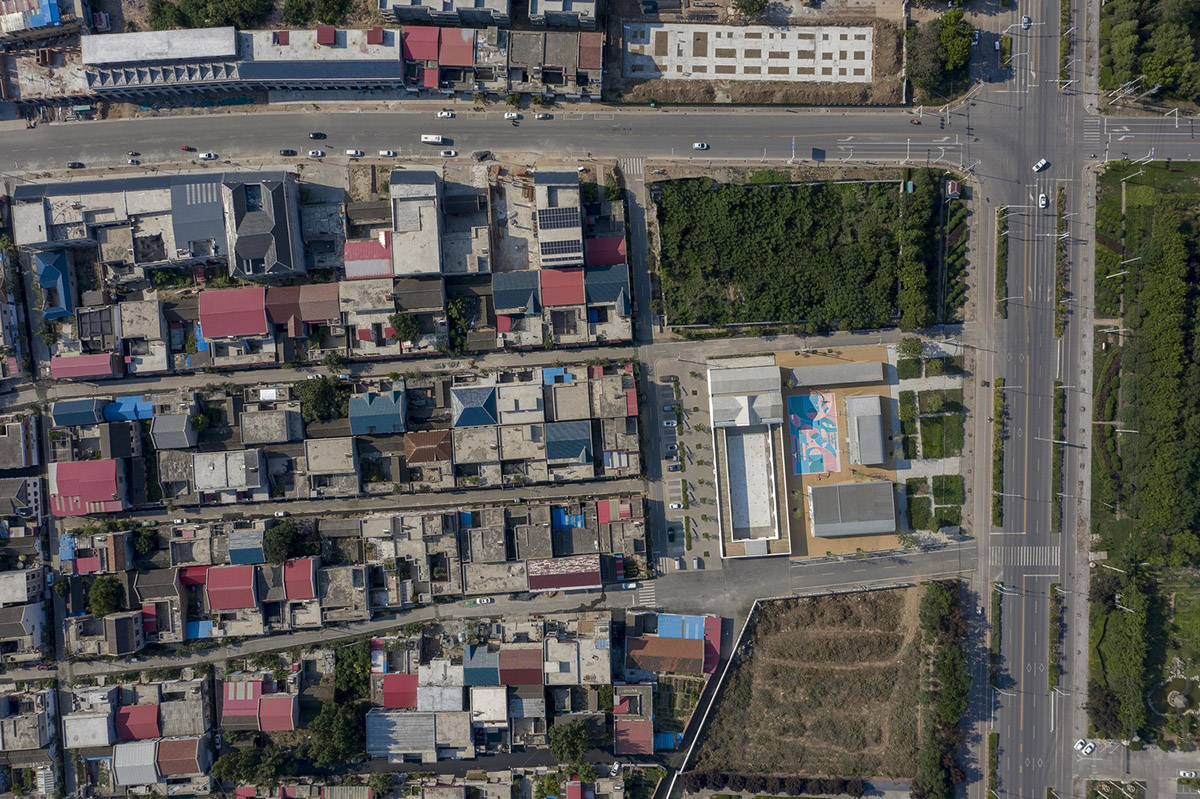