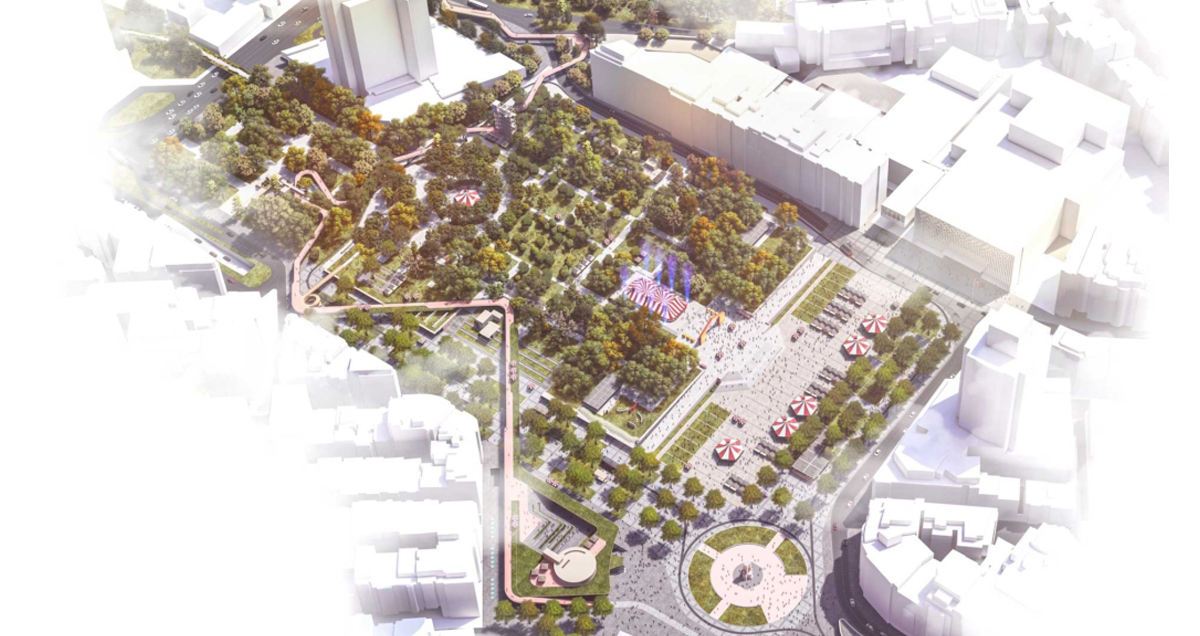 Taksim Square is the most significant square in the city of Istanbul and Turkey as a whole. Considering its location, it has been the center of countless historical events making it a landmark of touristic importance. Therefore, its urban transformation throughout its life is no surprise nor are the plans to re-design it. The latest has been an open call competition commissioned by the Istanbul Metropolitan Municipality. A total of 146 projects have been submitted and in September 2020 the top 3 runners were announced. To conclude the winner, a public vote has been conducted for a month and in November 2020 the project designed by Taksim Collective has been chosen as the winner with 86,597 votes. 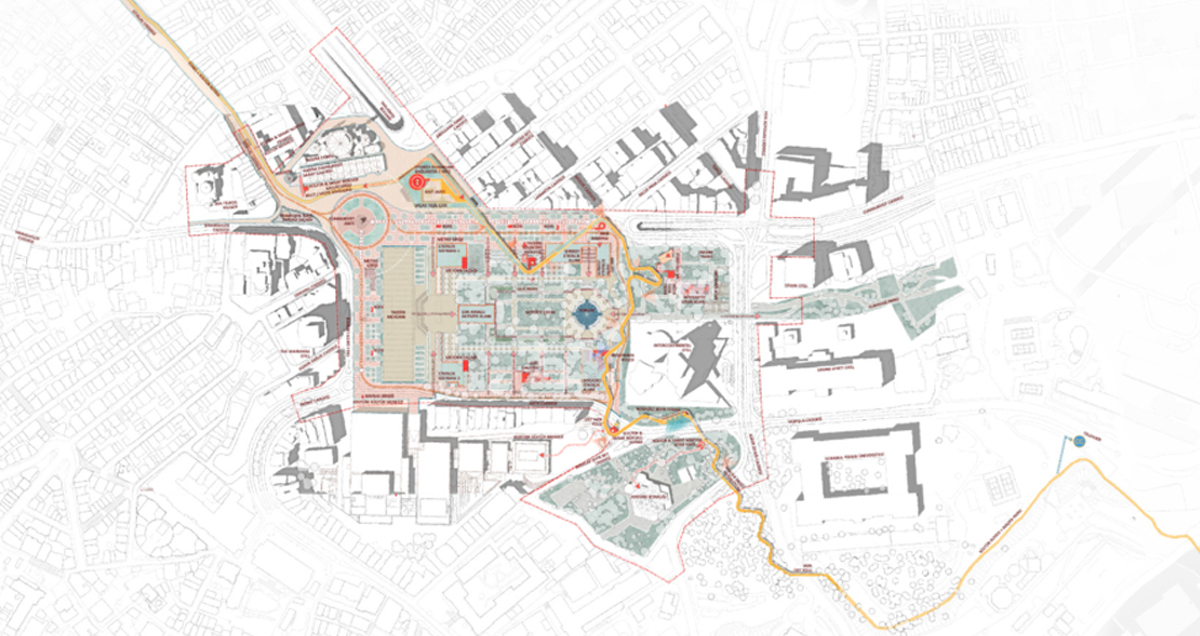 The urban project has engulfed various guiding principles while designing the square such as public interactions and needs, design flexibility, and rehabilitation of ineffective or dead zones. Because of the several failed previous projects, another principle was to integrate the ‘time layers’ of the square, rather than erasing the past, it embraced it and added to it. This principle is based on the belief that an effective public space requires time and nurturing for it to reach its ultimate state.

The design has been divided into several zones each having a specific function, some flexible while others are fixed, hosting temporary/ permanent activities, cultural spots, retails, etc. Bringing the ‘lost’ area in a more organized manner that's yet not rigid.

Even though there is still a grid design, the divisions and axis are rather an overall organic sensation that will come toile even more once the user experience is brought to life. 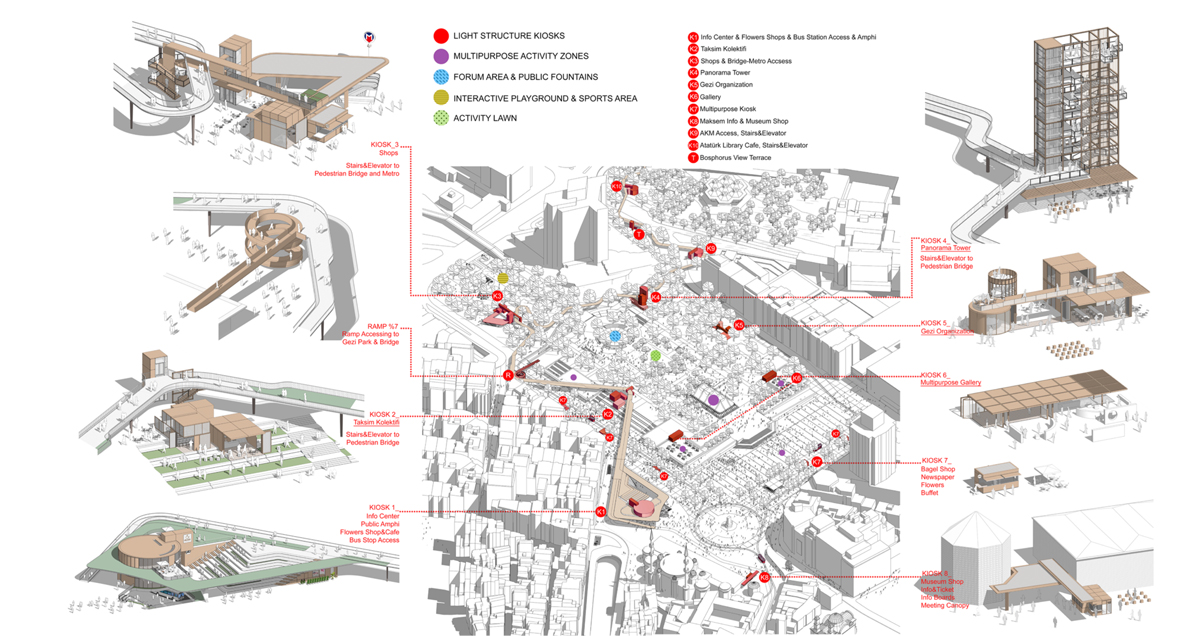 The project extends to several points that have specific functions within its spatial framework;

- Gezi Park: The current functions of Gezi Park will be saved and re-arranged to emphasize the potential that was lost in the previous/current state. The park will function as an ‘inner park’ surrounded by an outer green zone defining the spatial axis of the project. Underneath the existing park commercial shops and a pavilion is constructed which is descending to the underground level connecting to the metro line and the bus stops. The main goal is giving a function to Gezi park - a cultural activity park. Unlike the current Gezi Park which is a plain vast space with trees and concrete floors, the proposed space is a carefully divided and integrated activity zones including a basketball court, picnic zone, amphitheater, festival, and concert space (when needed), playground for children, and so on.

- The Republic Monument: The current space in the square and around it has not been intentionally built but rather developed organically over time into a focal point, the designers decided to keep it flexible just as it is. On the other hand, the square needs to direct the pedestrians towards Istiklal Avenue, hence the designers felt the need to enhance the monument's function as a meeting point for people and provided a canopy.

-Talimhane Street: Considering the history of the commercial area which is currently considered as a ‘dead zone’ the design offers the rehabilitation of this area by integrating it back to the square via a semi-open space that consists of a large canopy and an amphitheater. 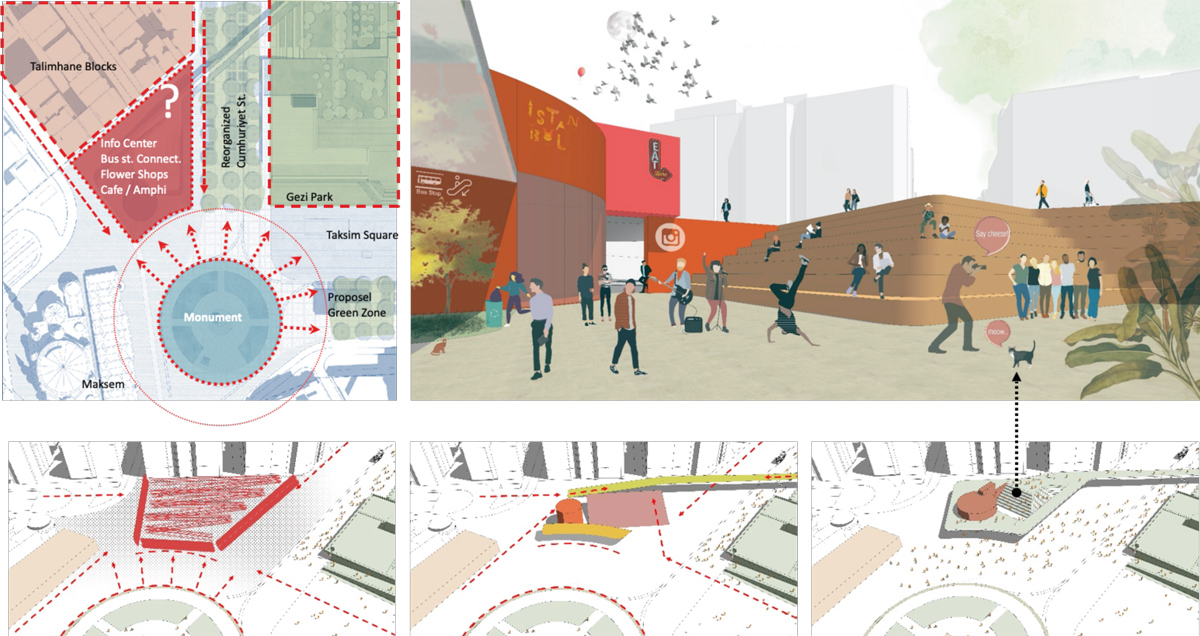 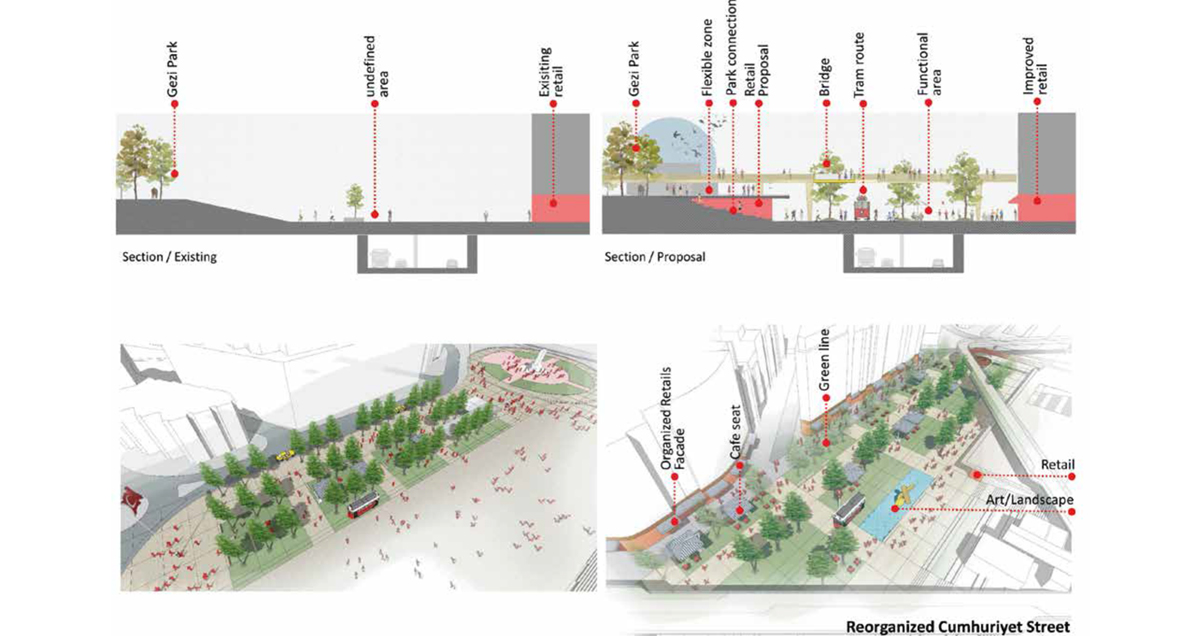 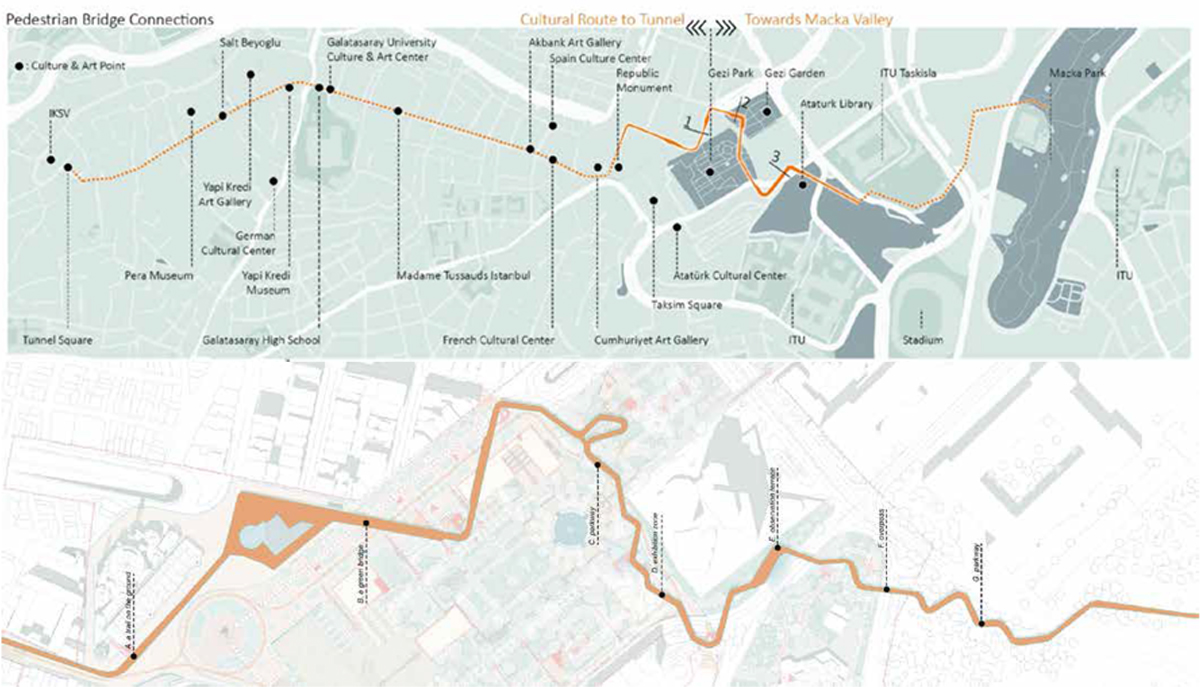 Taking into account the vast area that the project covers, a light-structured bridge is proposed which connects the Sishane area to Macka Park. It will be a promenade not only for the pedestrians who will have a view of the Bosphorus but, also a jogging and bicycle lane which the area of Taksim is lacking.

Concurrently, the Nostalgic tram line has been reserved and extended with a new lane all around Gezi Park. The current 2 underground bus stops are lacking light and organization as well as direction. A large gallery on the Cumhuriyet Street level is proposed for more natural light and easy access. This in turn will make the bus stops more welcoming to use. Another proposal in connection to transportation is to move the airport shuttles to another street, reducing the current traffic jam it creates.

Landscape, lighting as well as disabled-friendly design have all been adapted according to international and local environmental safety standards.

The landscape was divided into 3 elements; softscape, hardscape, and site fixtures.

Softscape: Conserving most of the existing trees, the added greenery is consisting of adaptive and native plants, which will reduce the maintenance needs and water supply.

Hardscape: Conserving the soil, trees, and the quality of the materials used for paving is the main concern of this element. Some of the existing pavements are renewed while others are reused depending on their condition. This helps the project economically since it is following the sustainability principle.

Site Fixtures: Two water fixtures are proposed which are controlled depending on the function and the need since the location of the fixtures is flexible. The water is filtered and reused. Rainwater harvesting concepts and bioswale systems are also integrated. Urban furniture also falls under this element and is divided into formal and informal categories. Steps, stairs, and walling will act as informal while benches will act as formal elements.

The illumination is designed to avoid light pollution and reduce energy consumption by using smart lighting control systems. Smart lighting control is also beneficial since the project has seasonal activities. Wi-Fi points are incorporated in the smart design as well. The several pavilions designed along the project will have a centerpiece lighting design allowing the space to function as a navigation focal point to orient the pedestrians while the lit canopies break the monotony of the pathway lighting.

Public space is designed for the needs of all therefore, easy access for the disabled has been taken into account where several access points throughout the project have been integrated using the required standards.

The current emblem of the square is ‘randomness and lost space’ which has not been used to its full potential even though several attempts have been made to enhance it. Taksim Square will be the transit and meeting point while Gezi Park will be a recreational area,  a combination of active and passive spaces that will hopefully bring the public space to its ultimate state.

You can read more information about the project on this page.

All the images and references have been provided by Taksim Collective.