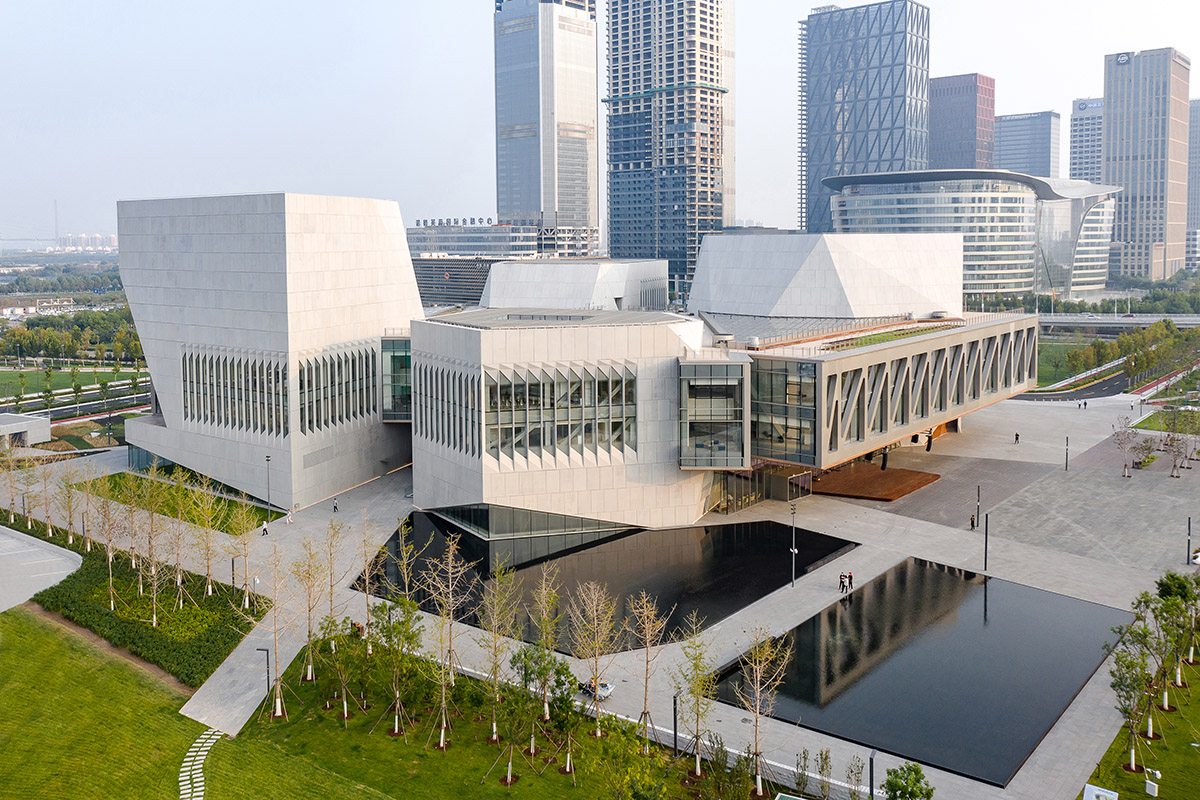 The Tianjin Juilliard School (TJS) is a center for performance, practice, research, and interactive exhibitions, with communal spaces that are designed to welcome the public into the creative process and performance of music. TJS is the first performing arts institution in China to confer a U.S.-accredited Master of Music (MM) degree.

Located in the Yujiapu Financial District, the 32,500-square-metre (350,000 square-foot) building was designed by Diller Scofidio + Renfro, the same firm responsible for the 2009 expansion of Juilliard’s iconic New York home. 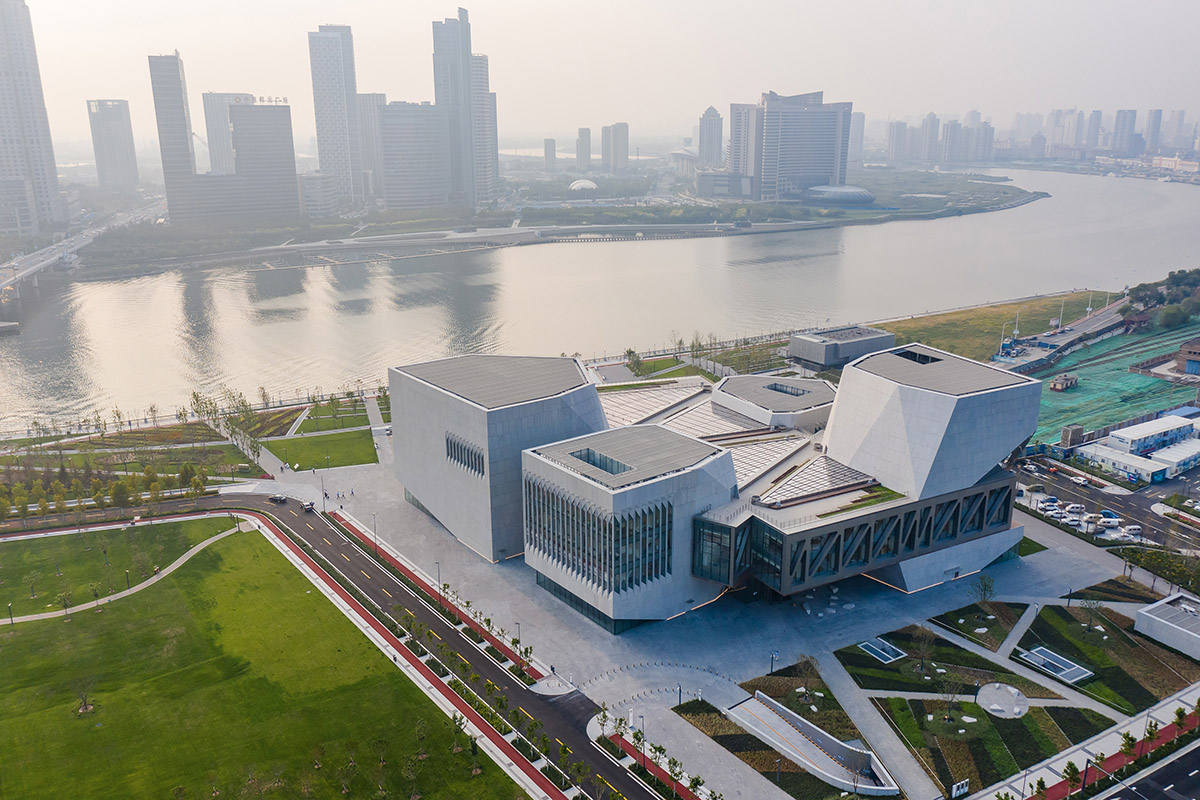 The school utilizes leading edge telecommunication and video conferencing technologies to ensure a high degree of  connectivity and collaboration between students and faculty at Tianjin Julliard School and The Juilliard School in New York. The Juilliard Imagination space, for example, is a digitally connected exhibition space, capable of hosting  livestreamed concerts between both Juilliard facilities. 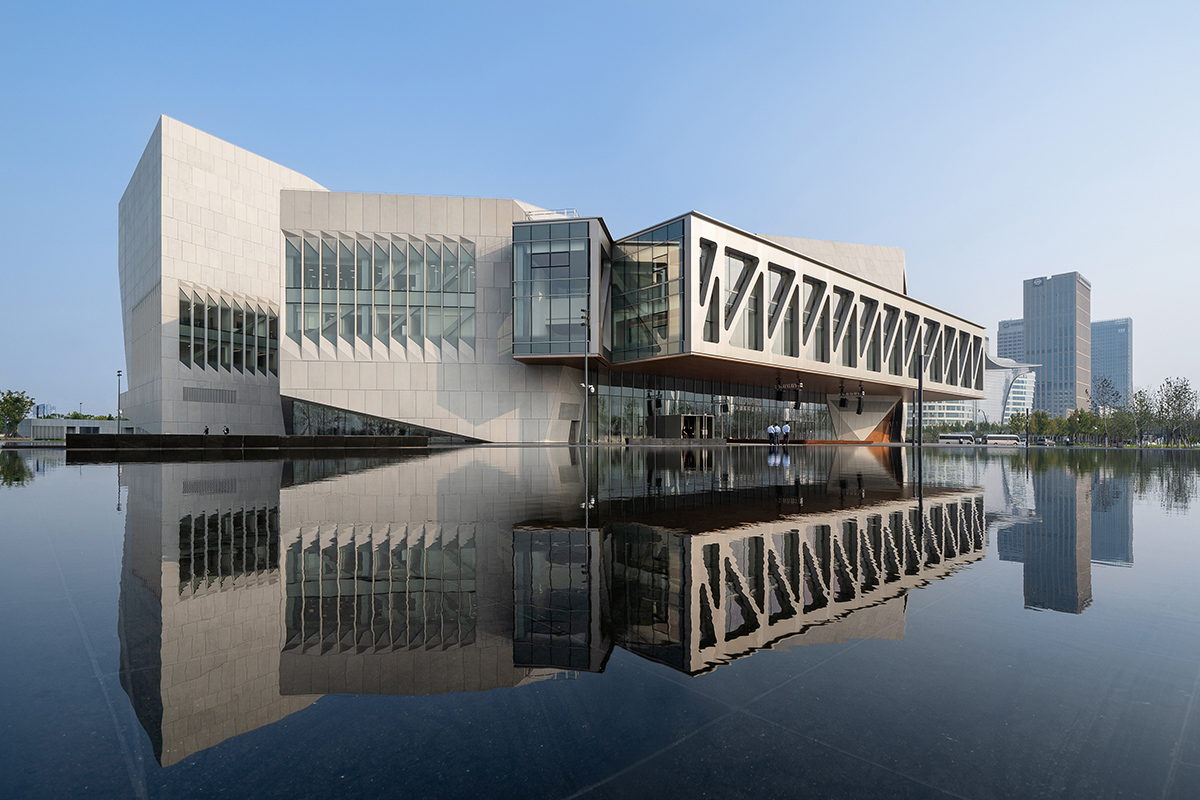 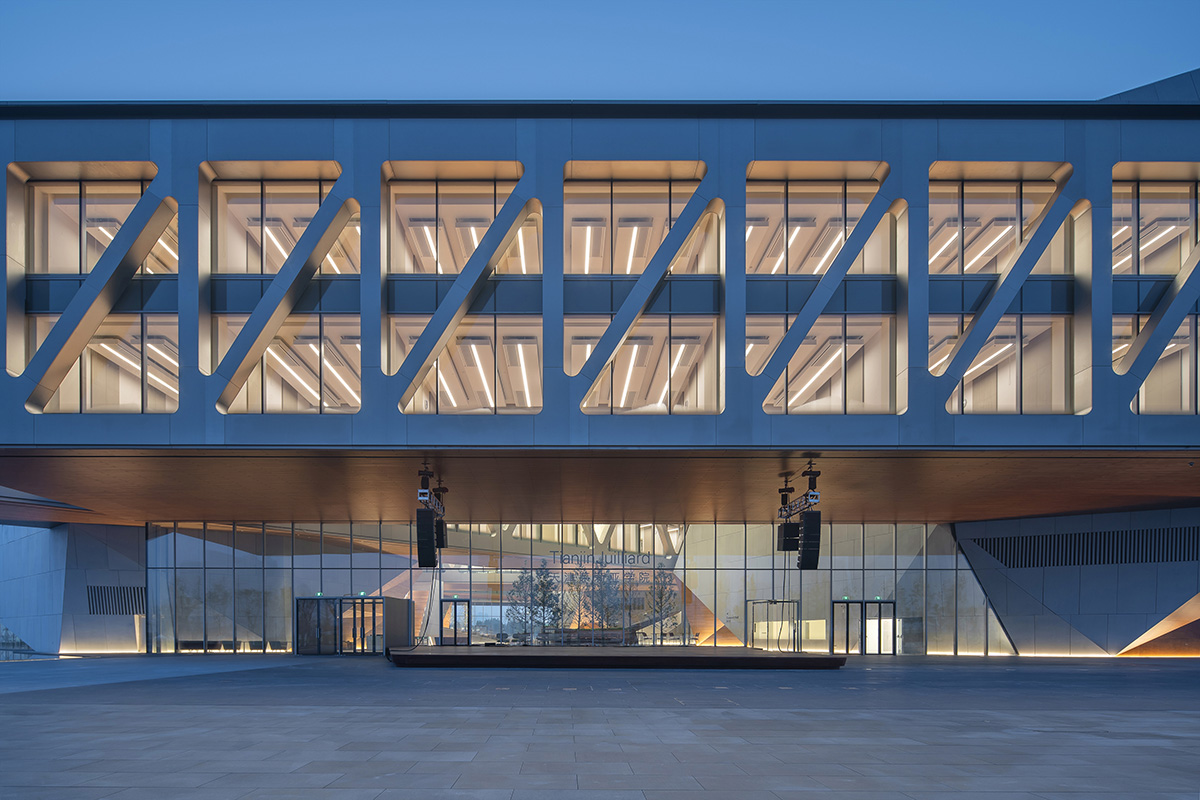 DS+R Partner-in-Charge, Charles Renfro said, "Our design for the new Tianjin Juilliard School takes much of its DNA  from Juilliard's New York campus, which we completed in 2009. Both projects seek to increase engagement with the  public through openness and transparency; offer informal spaces for students to mix and gather; and provide teaching and performance spaces with world-class acoustics. In Tianjin, the ground floor lobby acts as a continuation of the  surrounding park, accessible through multiple entries open to the public."

"We lowered the stages of the primary  performance venues one level below grade so the halls could share loading, back of house and support spaces without  interrupting the lobby. All of the teaching and practice spaces occupy five glass-clad bridges that span between the  performance pavilions, bringing daylight and views to and from these education spaces while broadcasting the  activities of the school to the general public. As both an educational tool and a performance vessel, the building acts a  finely tuned and highly crafted instrument in and of itself." 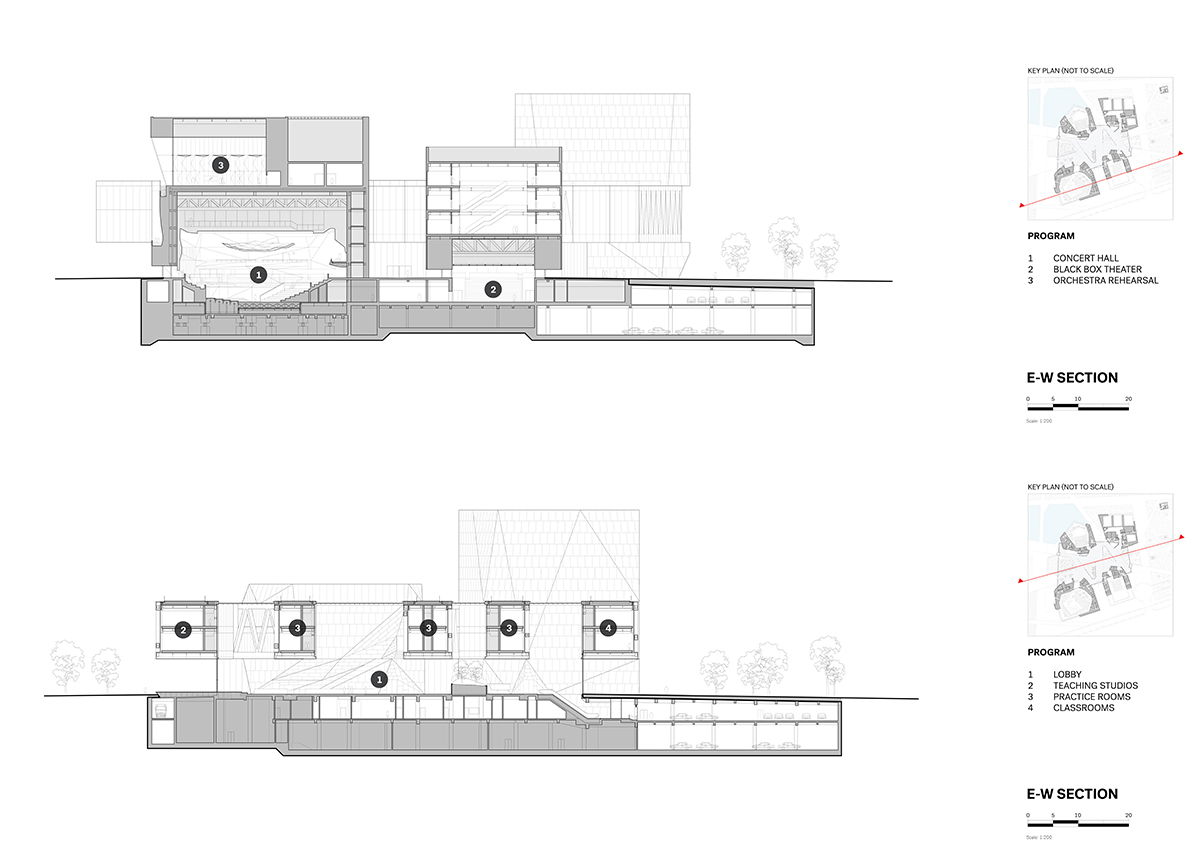 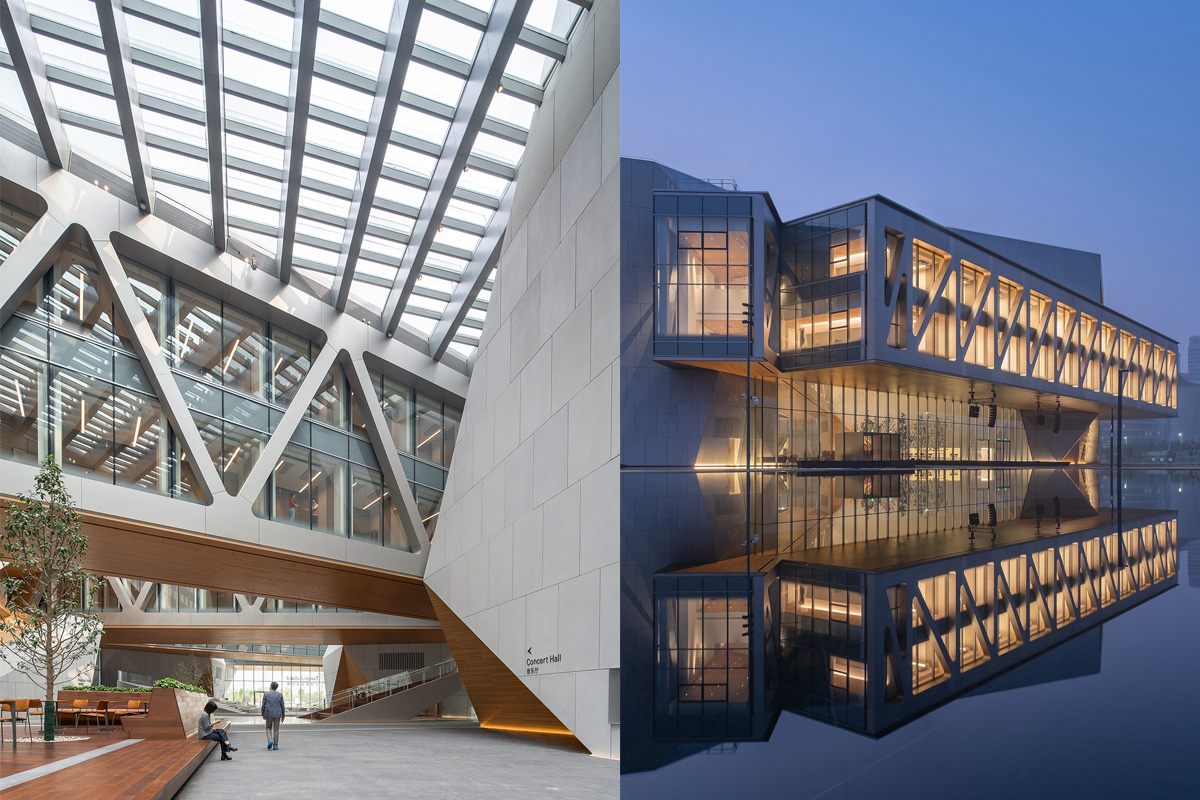 The four pavilions serve as cornerstones for the campus, with glass bridges spanning a generous, column free space that extends the surrounding park into the building. The five windowed bridges house two levels of instructional spaces including 12 classrooms, 23 teaching studios, and 86 practice rooms of diverse sizes that can be viewed from the lobby below. Where the bridges intersect, students can gather in intimate, double height lounges with panoramic views of the city or the Hai River.

Arup engineers sought to integrate the distinct main spaces and their connecting bridges into a single structure, free of movement joints. From a structural perspective, the result was essentially a single building, as opposed to a more conventional solution of a series of smaller buildings and bridges in close proximity. Eliminating movement joints enabled an uncompromised expression of exterior finish materials as well as improved weather protection of the exterior envelope. In addition, leveraging the full extent of the project as a single structure offered maximum efficiency against wind and seismic action. 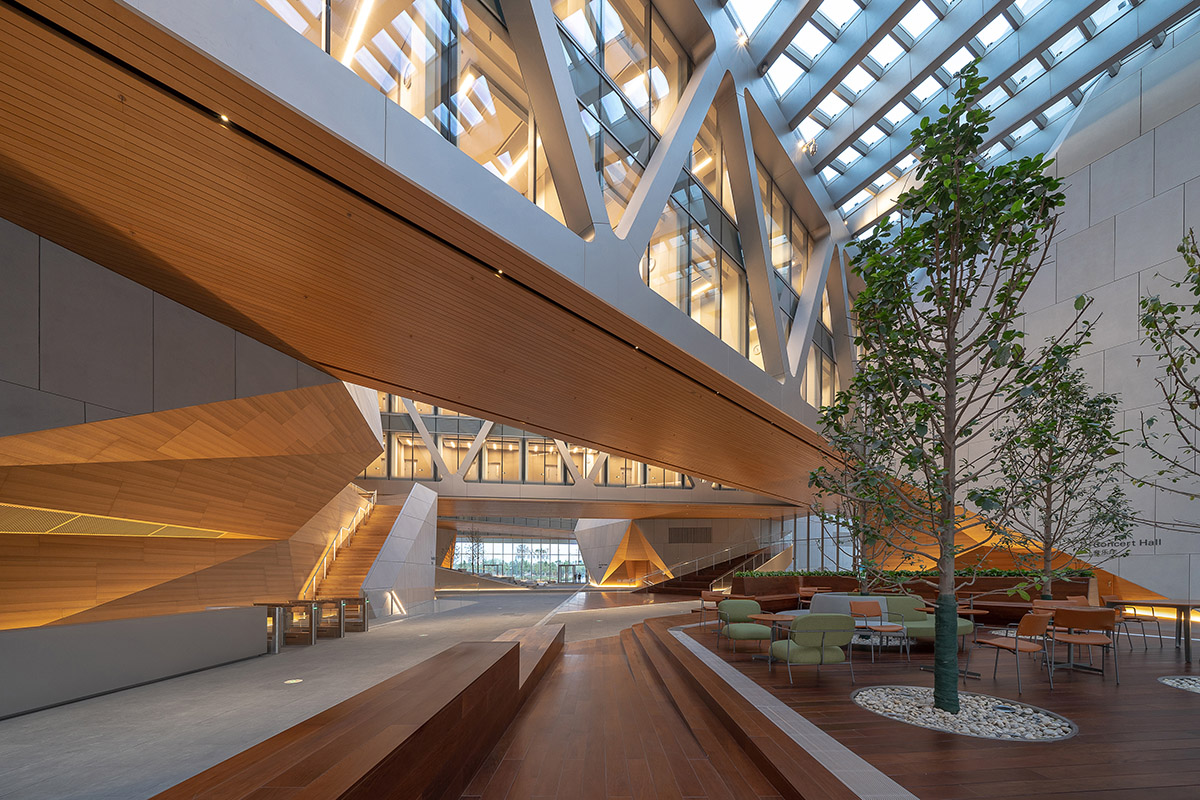 Designed in collaboration with Jaffe Holden, the same acoustician for Juilliard’s New York campus, TJS was built to meet the high demands for world-class acoustics and sound isolation, without compromising the building’s openness and transparency. TJS achieves the highest level of acoustic performance in all measurable acoustic criteria, including NC-15 background noise levels which is near the threshold of human hearing.

Many of the same strategic material, surface and space configuration proven successful in Juilliard New York were also implemented in Tianjin. The common strategies used in both campuses include box-in-box isolation and adjustable acoustic banners, as well as the same specifications for seating in the performance halls and the same custom steel acoustic doors in the practice and teaching areas. The concert hall is acoustically isolated on giant springs and an acoustic resonant chamber under the stage enhances the sound of cello and bass.

Distinctive diffusion cones identical to those found on the upstage wall and side walls of Alice Tully Hall were also used in the TJS concert hall to disperse sound and reduce the harshness of tone. In the Orchestral Rehearsal space, flipping wood wall panels also utilized in Juilliard New York allow the room to be fine-tuned for any performance or rehearsal. 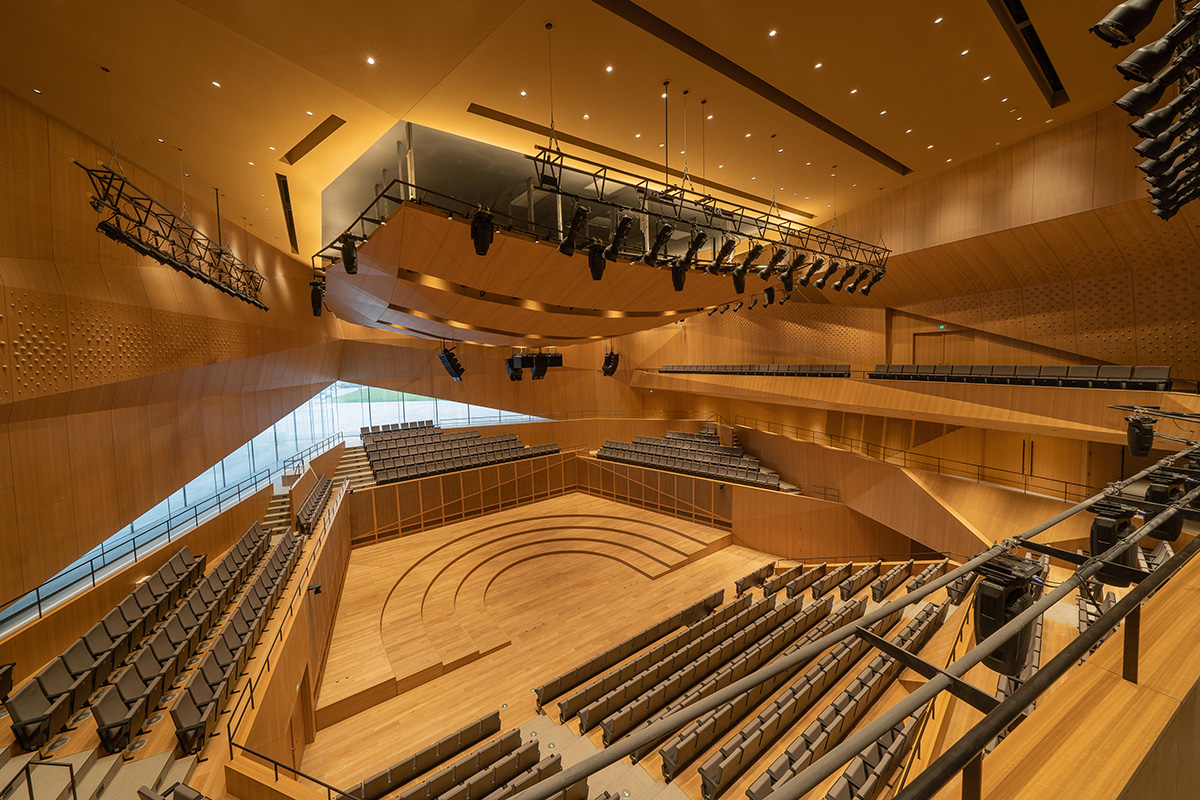 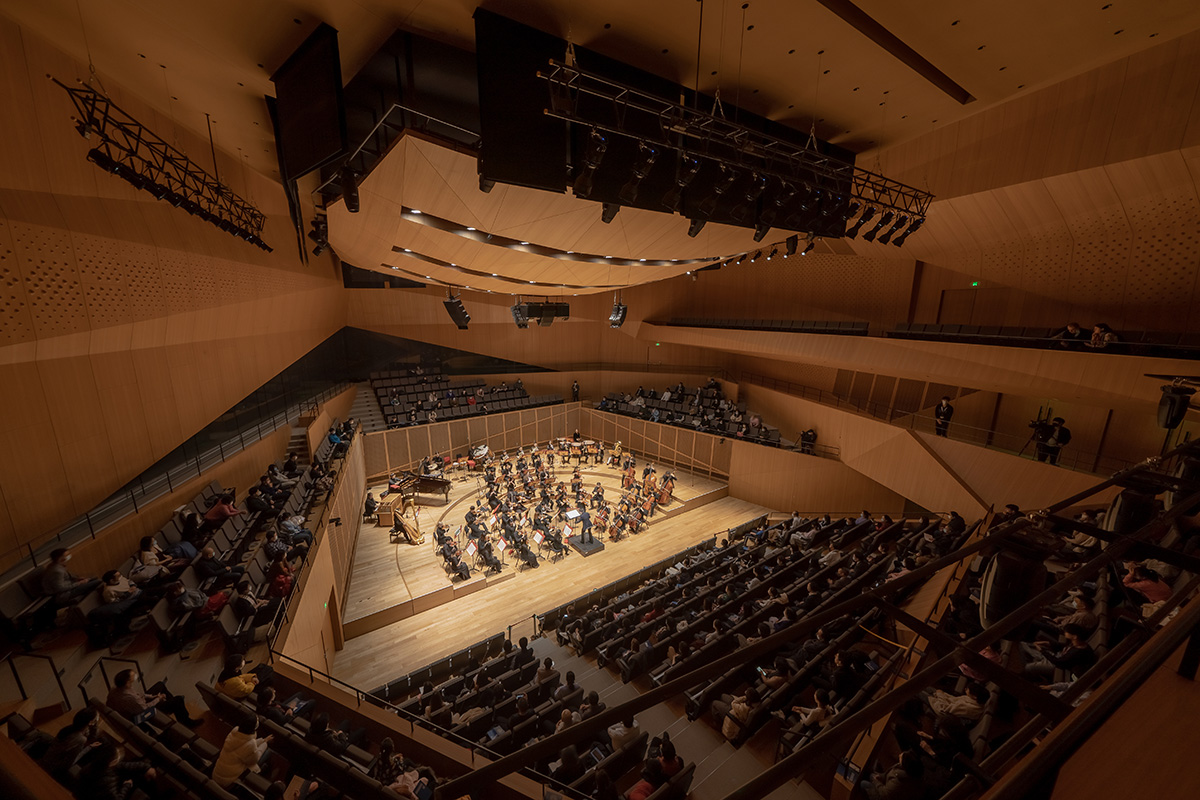 In order to foster both a visual and aural connection between visitors in the lobby and students in the practice rooms, the glazing of the bridges was engineered to let moderate sound from the practice rooms pass into the lobby, while lobby sound is hushed when penetrating the sound-absorptive practice spaces. The lobby acoustics are tempered with slatted-wood acoustic soffits under all the bridges, micro-perforated wood wall panels at each performance hall entrance, and upper wall acoustic plaster panels. 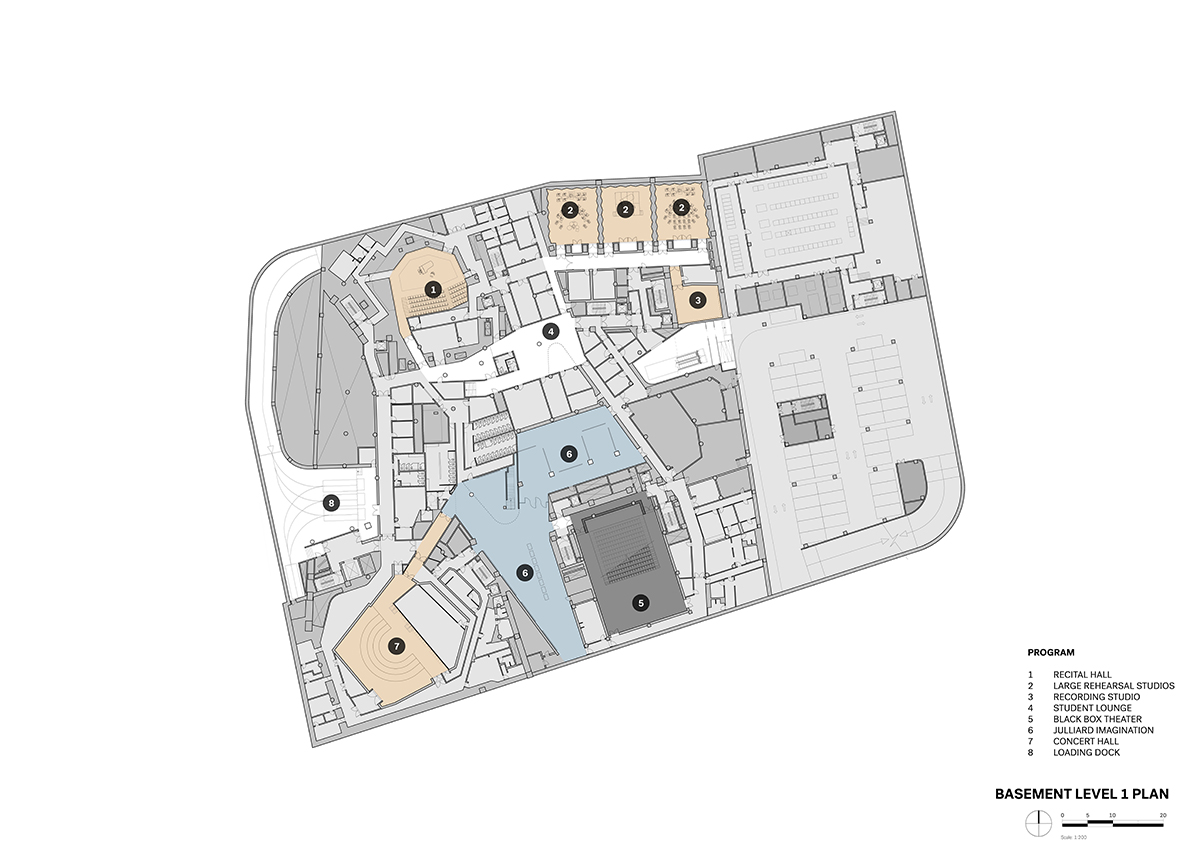 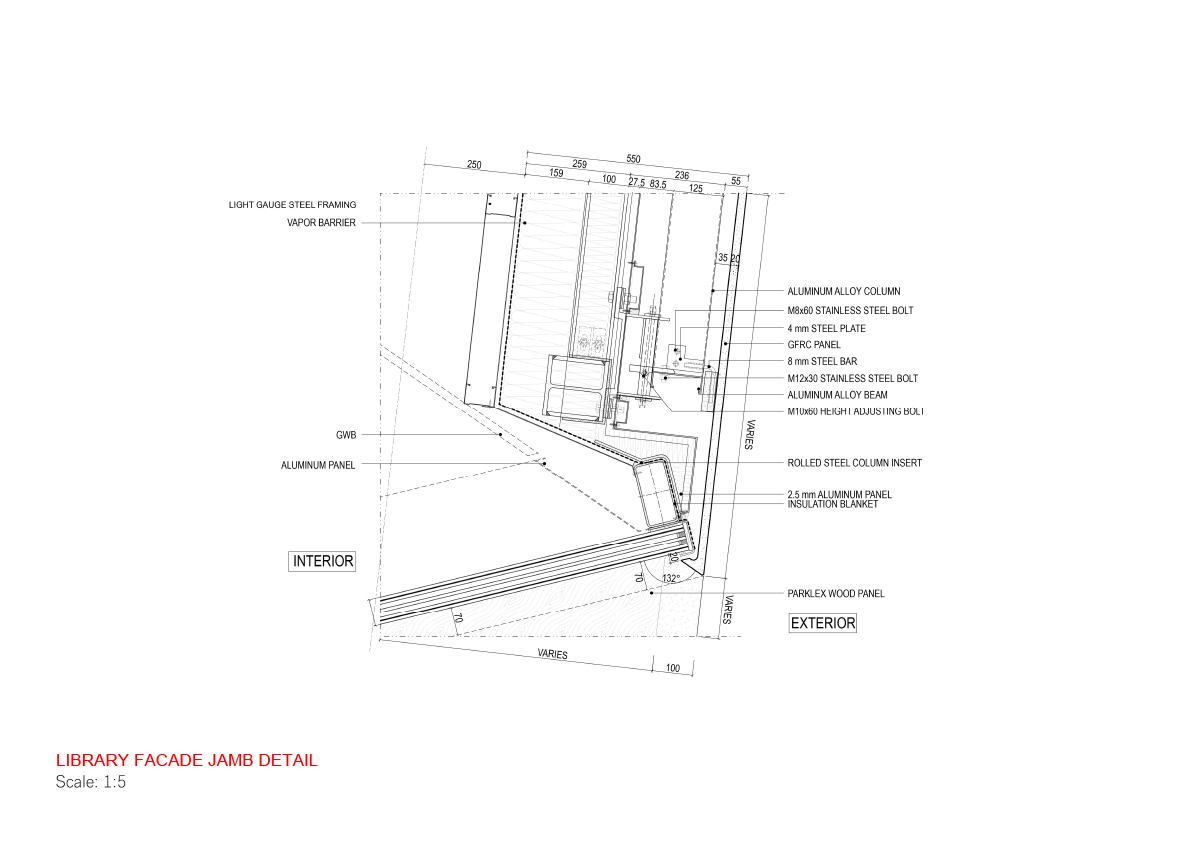 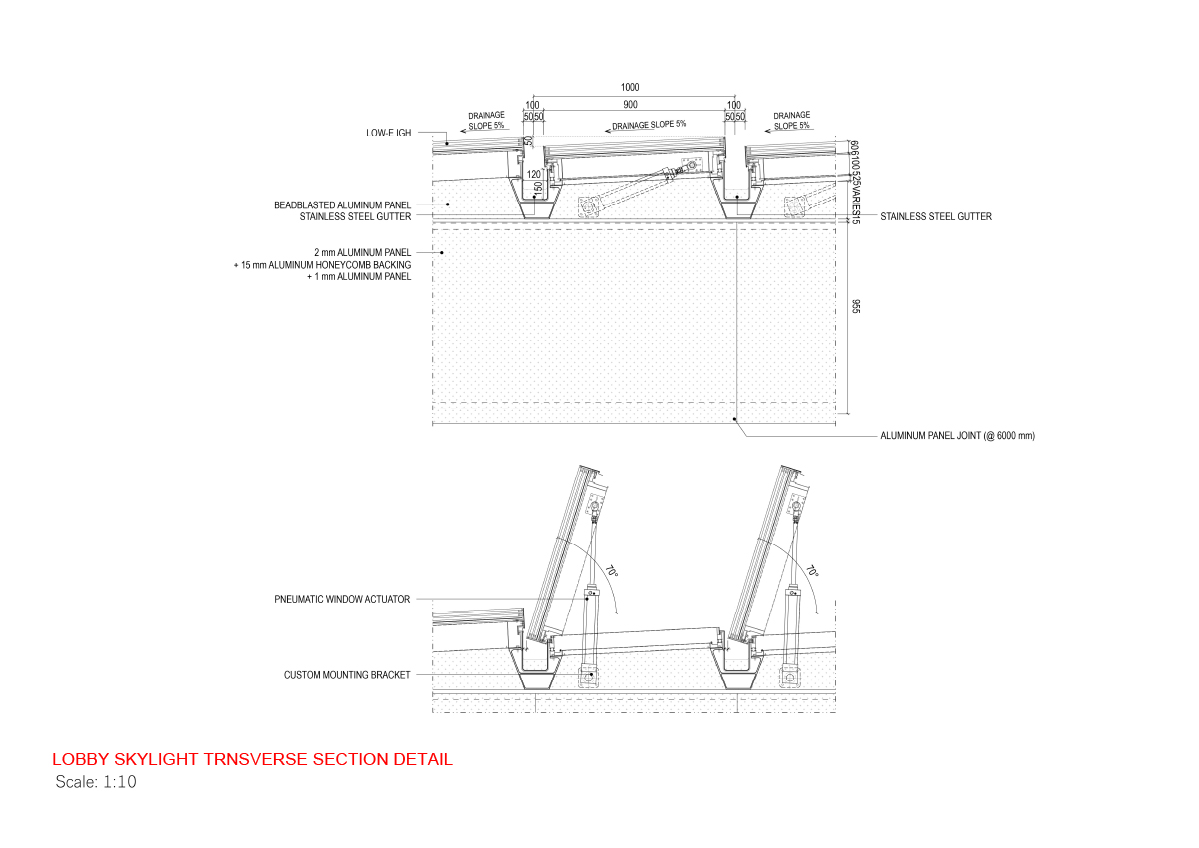 Founded in 1981, Diller Scofidio + Renfro (DS+R) is a New York-based, interdisciplinary design studio. With a focus on cultural and civic projects, DS+R’s  work addresses the changing role of institutions and the future of cities.

DS+R completed two of the largest architecture and planning initiatives in New York City’s recent history: the High Line and the transformation of the Lincoln Center for Performing Arts. In 2019, the studio completed two significant cultural  projects in New York: The Shed and the renovation and expansion of MoMA.