Winners have been announced for the 2021 Kaira Looro Competition's "Women’s House" in southern Senegal, Africa.

The objective of this year’s edition of the Kaira Looro international architecture competition was to design a women’s house created to promote gender equality as a determining factor for development in rural Africa.

Participants from all over the world submitted their architectural proposals, based on innovative and sustainable design and destined to accommodate awareness-raising activities and training initiatives aimed at developing the village, in the name of equality.

The competition is organised by the non-profit organization Balouo Salo, the humanitarian organization engaged in charitable projects in Africa. The organization said that "all proceeds (obtained from the participation fees) will be donated to the construction of the winning project in a village in southern Senegal, where the organisation itself operates."

World Architecture Community is official media partner of this year's competition and is sharing the results of the competition with details.

"Rural development, a reduction in discrimination and the creation of a sustainable environment all depend on the hard work which every member of society invests, both directly and indirectly, in the collective. Gender equality is crucial to the construction of an equitable society in which everyone can make a fundamental contribution to sustainable development," said the competition.

"Equality is not only a fundamental human right, but a necessary condition for a prosperous world. That’s why it’s number five on the list of “Sustainable Development Goals” established by the United Nations: eliminate all forms of discrimination and violence, safeguard the rights of all genders, and provide social protection services, thus guaranteeing female participation at all levels of decision making."

The architecture requested by the competition was a symbolic and ecological 300 square meter space inspired by local traditions, that can be self-constructed with the benefitting community itself. A space in which associations and members of society can meet and discuss the topics of equality and human rights, guaranteeing involvement and emancipation of the female community in favor of the region’s social, economic, and political development.

The project area is in southern Senegal, where Balouo Salo has been active since 2014 with the creation of various infrastructural projects that have facilitated access to potable water, encouraged education, and promoted sustainability and human rights. This is one of the least developed areas in Senegal: the poverty rate is approximately 90%; sanitary conditions are among the worst in the country with only 8% of the population having access to filtered water; and 70% of the population lives in homes without access to electricity.

The organization announced the 30 winning projects, which include 1st place, 2nd place, 3rd place, 2 honourable mentions nominated by the president of the jury, Kengo Kuma, and by the Balouo Salo Organization, 5 special mentions, and 20 finalists.

The winning team will receive a cash prize of €5.000 and an internship at the prestigious Kengo Kuma & Associates architectural firm in Tokyo, Japan.

The winning project will be built by the Balouo Salo humanitarian organization as a charity project in a small village in southern Senegal to promote equality and combat discrimination and violence, encouraging emancipation of the female community in a rural context in Sub-Saharan Africa.

The winner of the 2021 edition is Juan Pablo Lopez Isabella from Uruguay. The second prize was won by a team from Portugal made up of David Gonçalves, João Dias, Gonçalo, Santos, Pedro Gomes, Daniel Simões.

The third place, however, comes from Italy with a team made up of Annachiara Trabacchin, Elena Paccagnella, Gloria Aiolfi, Alberto Martini.

Two honourable mentions were nominated, one selected by Kengo Kuma and the other by the Balouo Salo Organization, the teams come respectively from Vietnam and Poland. As is the event’s custom, this year too all of the proceeds from enrolment fees will be donated to the Balouo Salo humanitarian organization.

Specifically, this year’s funds will be used to build the winning project, which will be inserted within a broader humanitarian project that, in addition to construction of the structure, includes training, awareness-raising activities, and community organization in order to promote topics related to equal opportunity policies and the fight against discrimination.

Participation in this year’s edition was exceptional, with over 1000 entries from all over the world, most of which from: Italy, Poland, Brazil, Greece, France, Colombia, China and Mexico. More than 150 teams of various nationalities participated.

Scroll down to see the 2021 Kaira Looro Competition's "Women’s House" with their short project descriptions below: 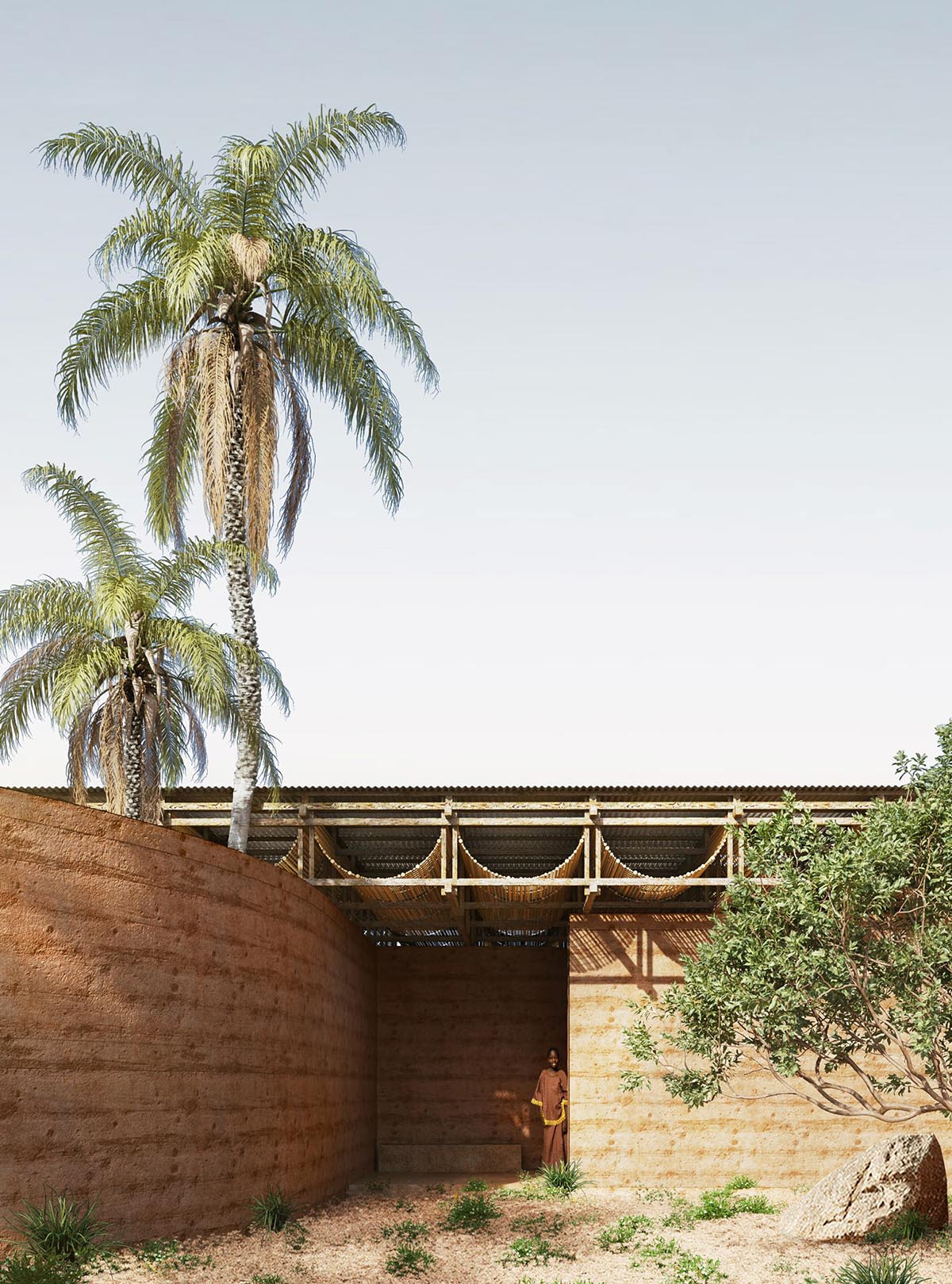 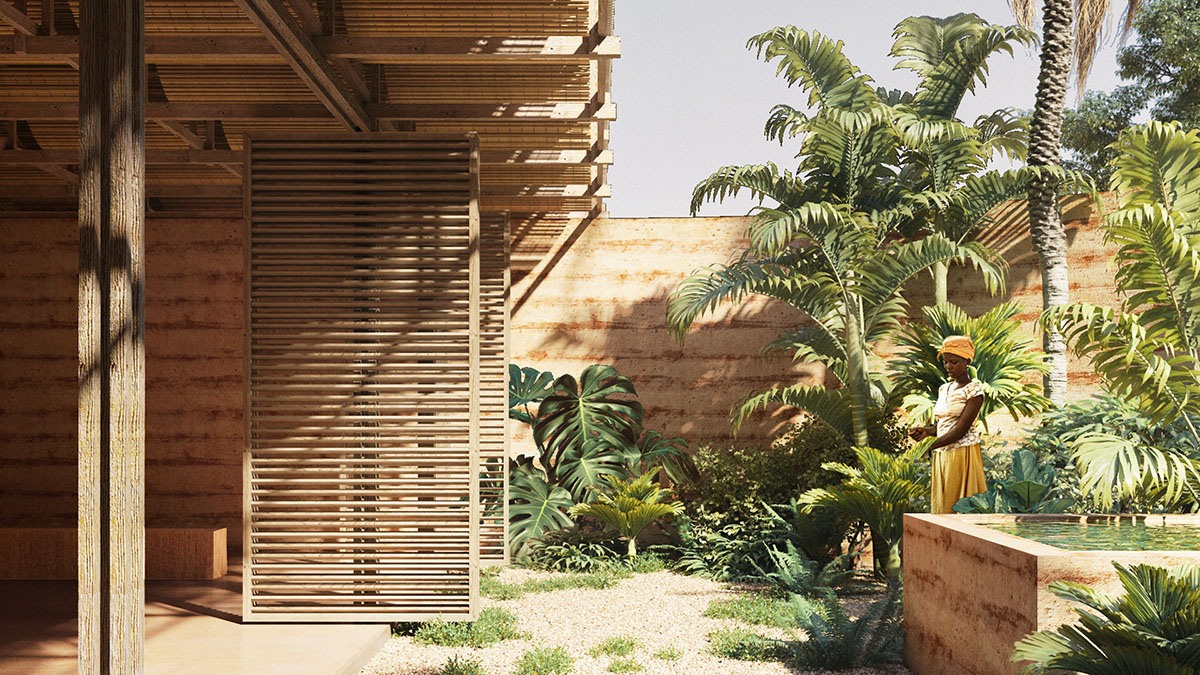 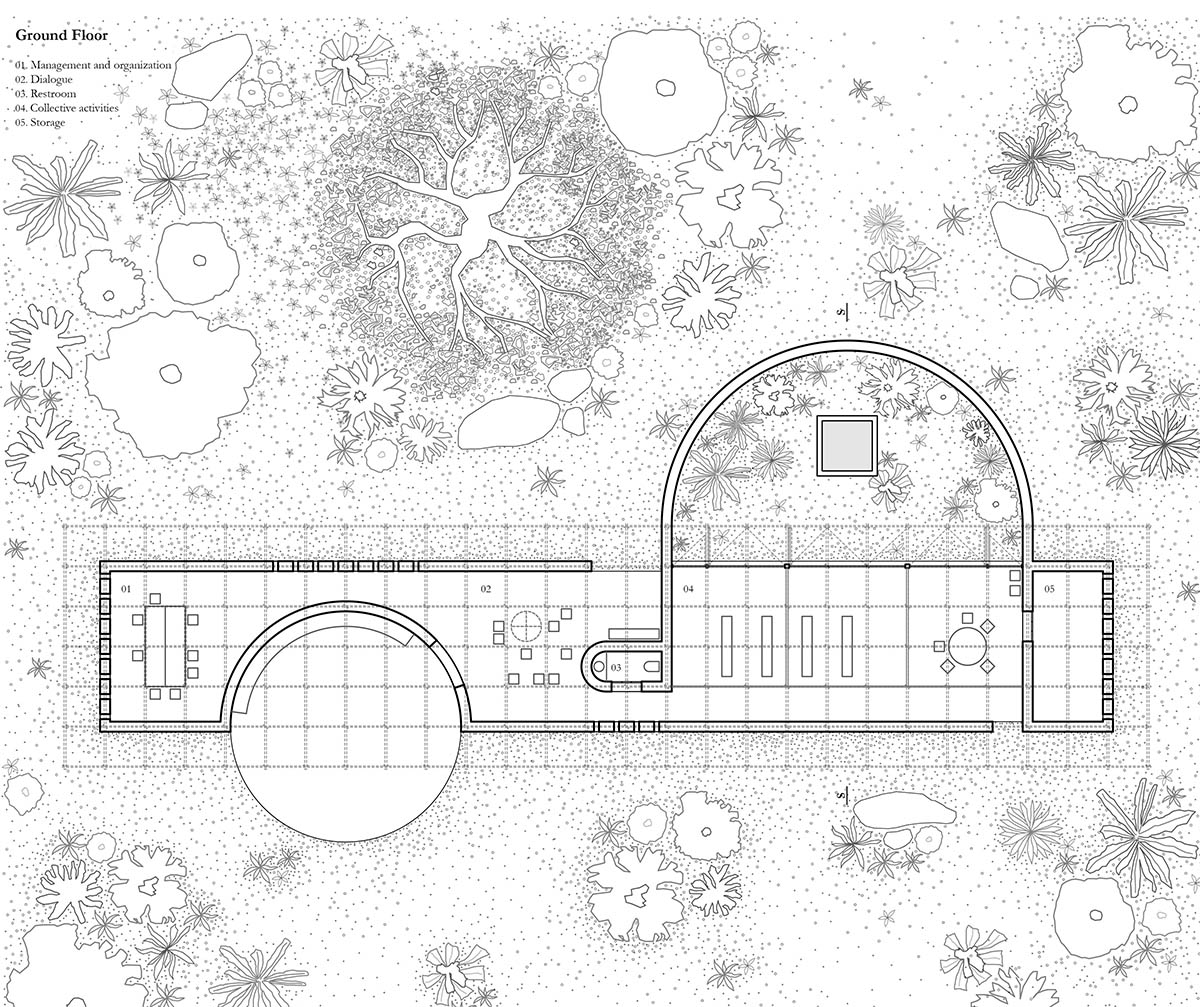 "In the villages of Southern Senegal architecture is closer to earth. Fences are made of sticks, dwellings predominantly made of straw and adobe, are the setting for a simple and sensitive life whose existence is immersed in a prodigious nature. Above this tropical landscape, framed by the Tannaf Valley and dotted by the presence of robust and tenacious local trees, lies the Women's House. Located in the village of Baghére, on the plot of land attached to the local municipality in front of the road, with a flat and sandy terrain, with acacia and mango trees in the background, an enclosure is planned to hold awareness, training activities, and promote the growth of the region under the sign of equality." Read more. 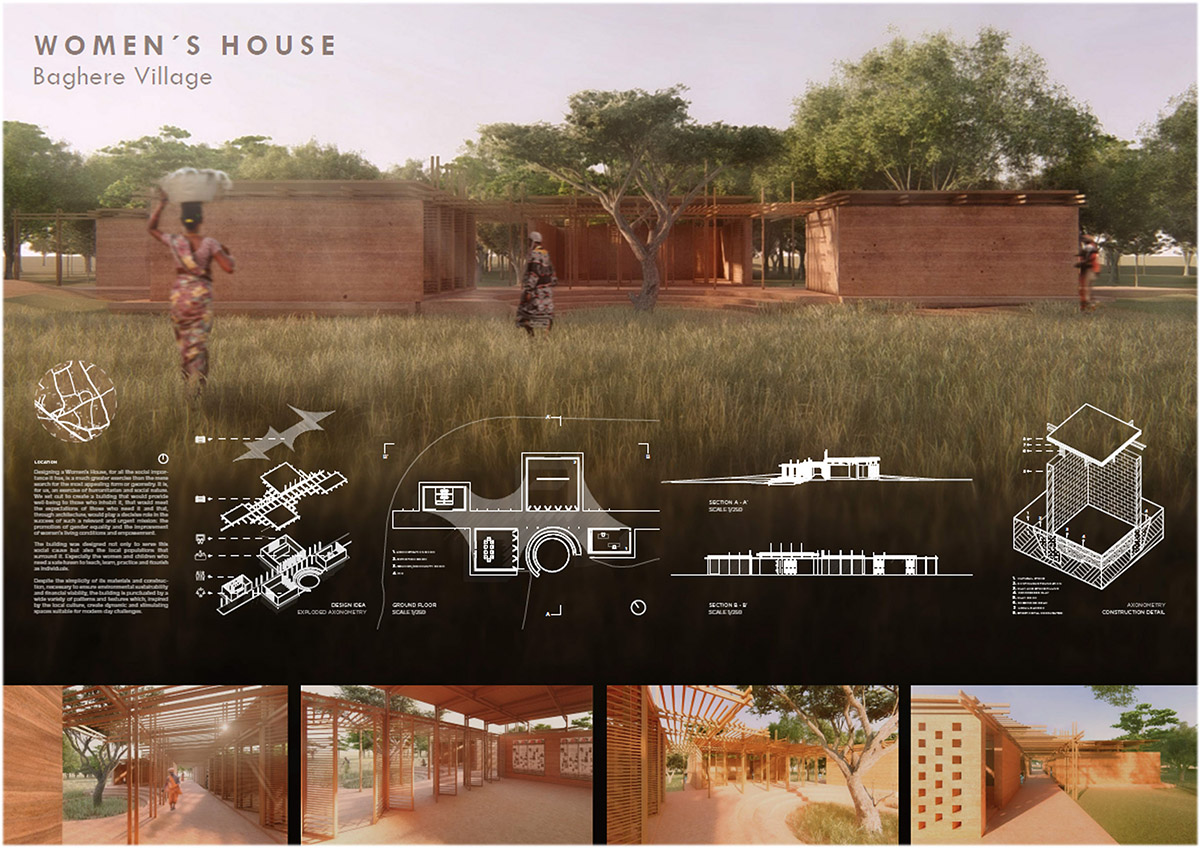 "Designing a Women’s House, for all the social importance it has, is a much greater exercise than the mere search for the most appealing form or geometry. It is, for us, an exercise of humanitarian and social nature. We set out to create a building that would provide well-being to those who inhabit it, that would meet the expectations of those who need it and that, through architecture, would play a decisive role in the success of such a relevant and urgent mission: the promotion of gender equality and the improvement of women's living conditions and empowerment. To achieve this, the search for the right design began by understanding how we wanted the building to be perceived from the outside and how we wanted it to be experienced and felt once inside." Read more. 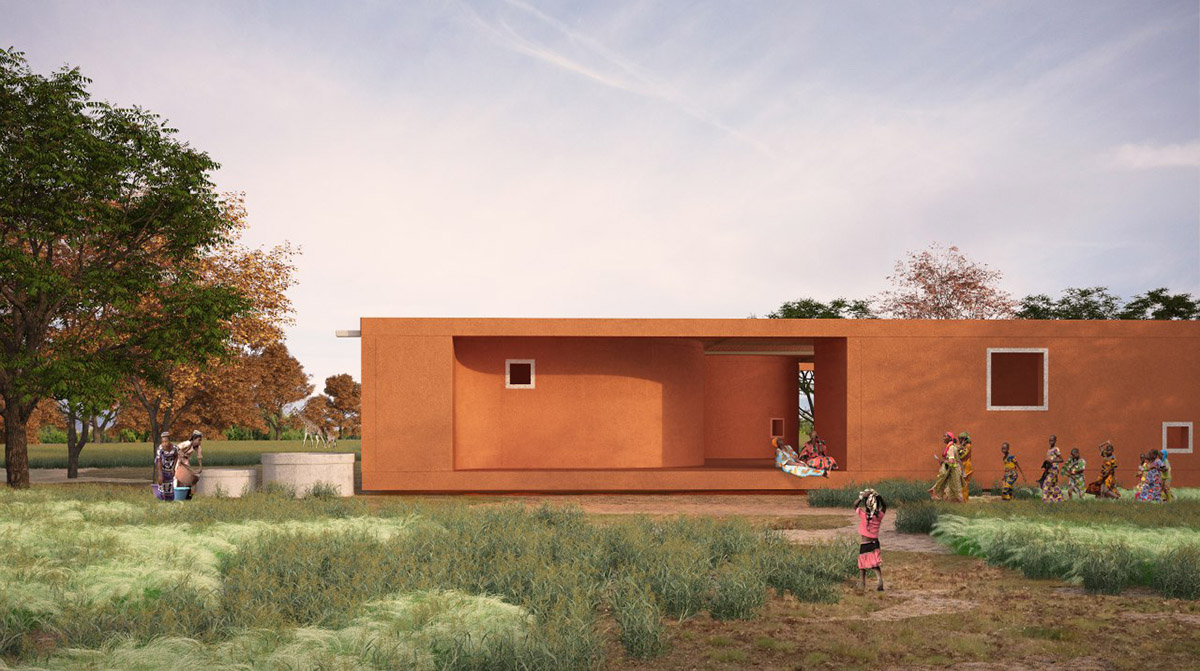 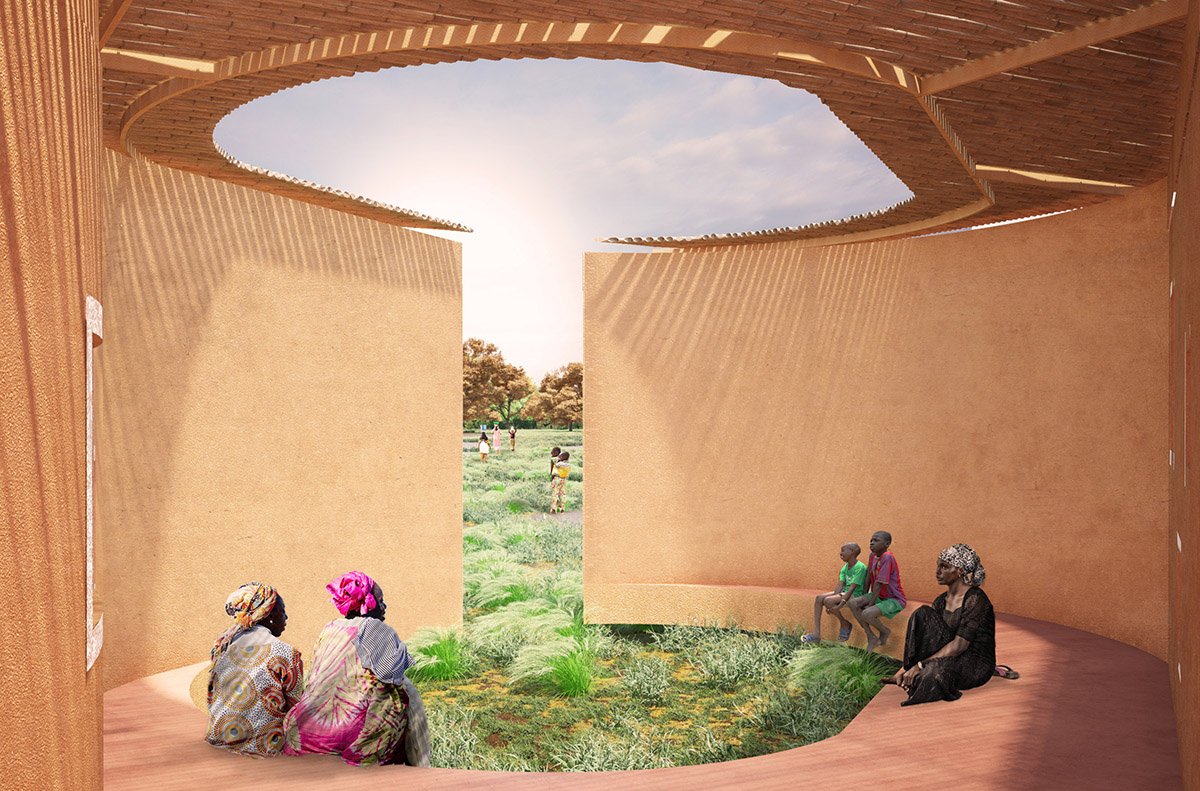 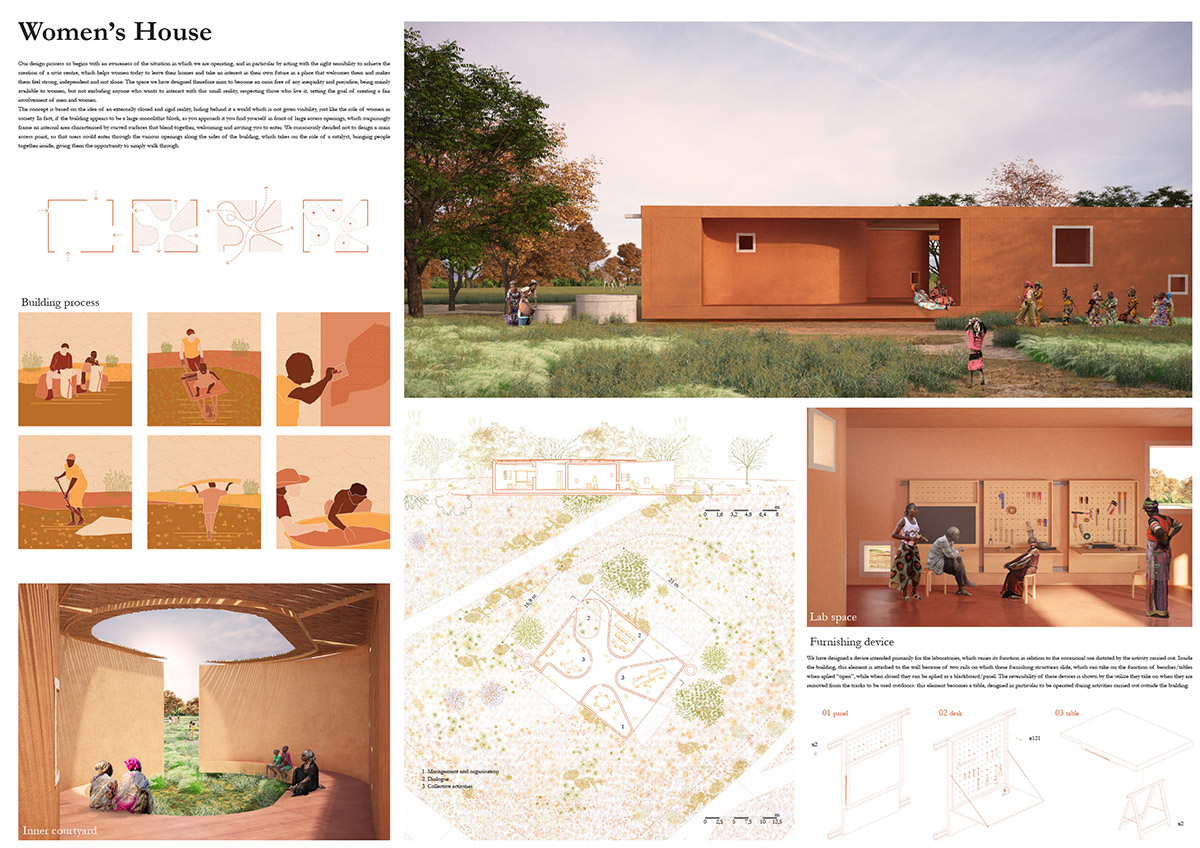 "In Senegal, the figure of the woman is historically linked to the activities of the home, even if today, despite the domestic aspect being the main domain in which the figure of the woman is included, at least 36% of women are in the labour market, without their participation being recognised as equal to that of men. The affirmation of women's role outside the home is at the basis of the cultural revolution that the whole world is facing, more or less easily, but as a first step towards solving the undeniable Gender Gap that still hasn't been totally eliminated by any country in the world. Our design process so begins with an awareness of the situation in which we are operating, and in particular by acting with the right sensibility to achieve the creation of a civic centre, which helps women today to leave their homes and take an interest in their own future in a place that welcomes them and makes them feel strong, independent and not alone." Read more. 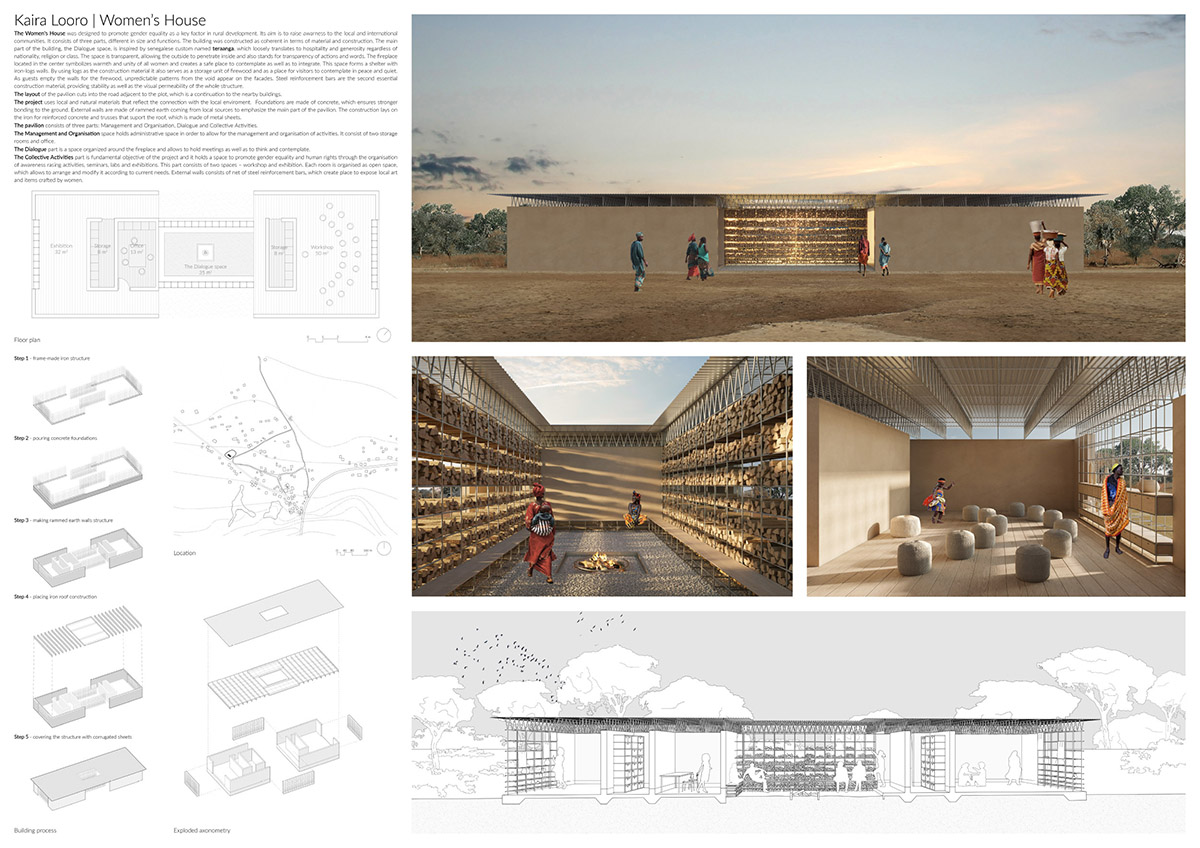 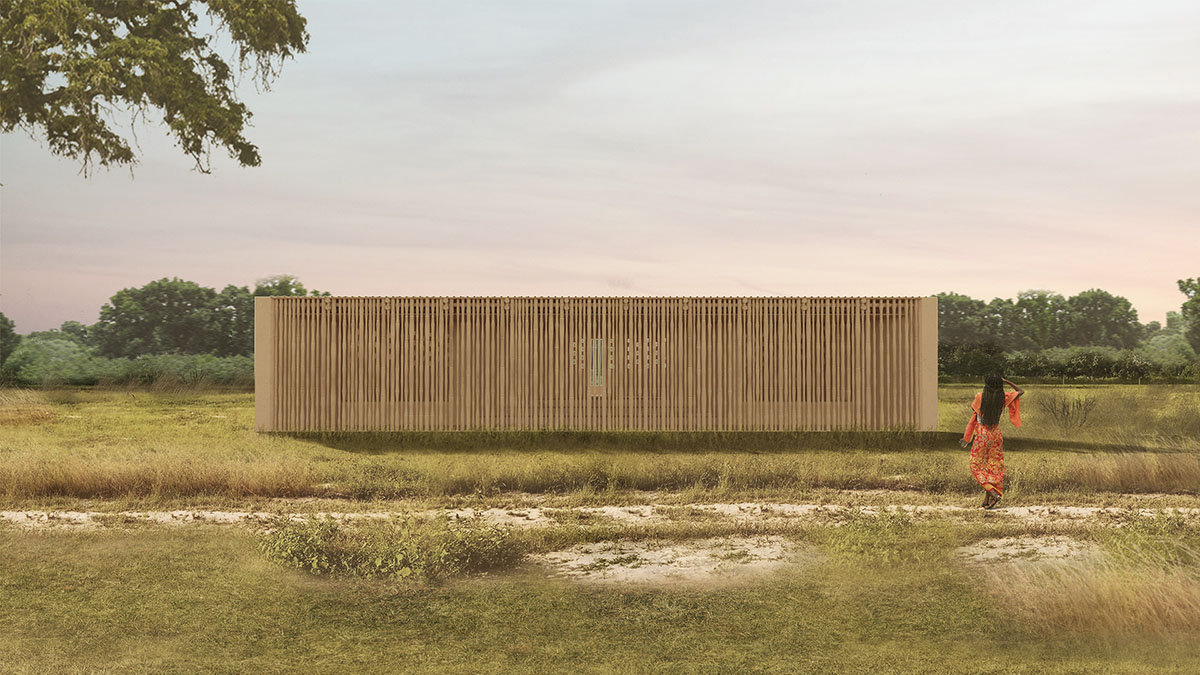