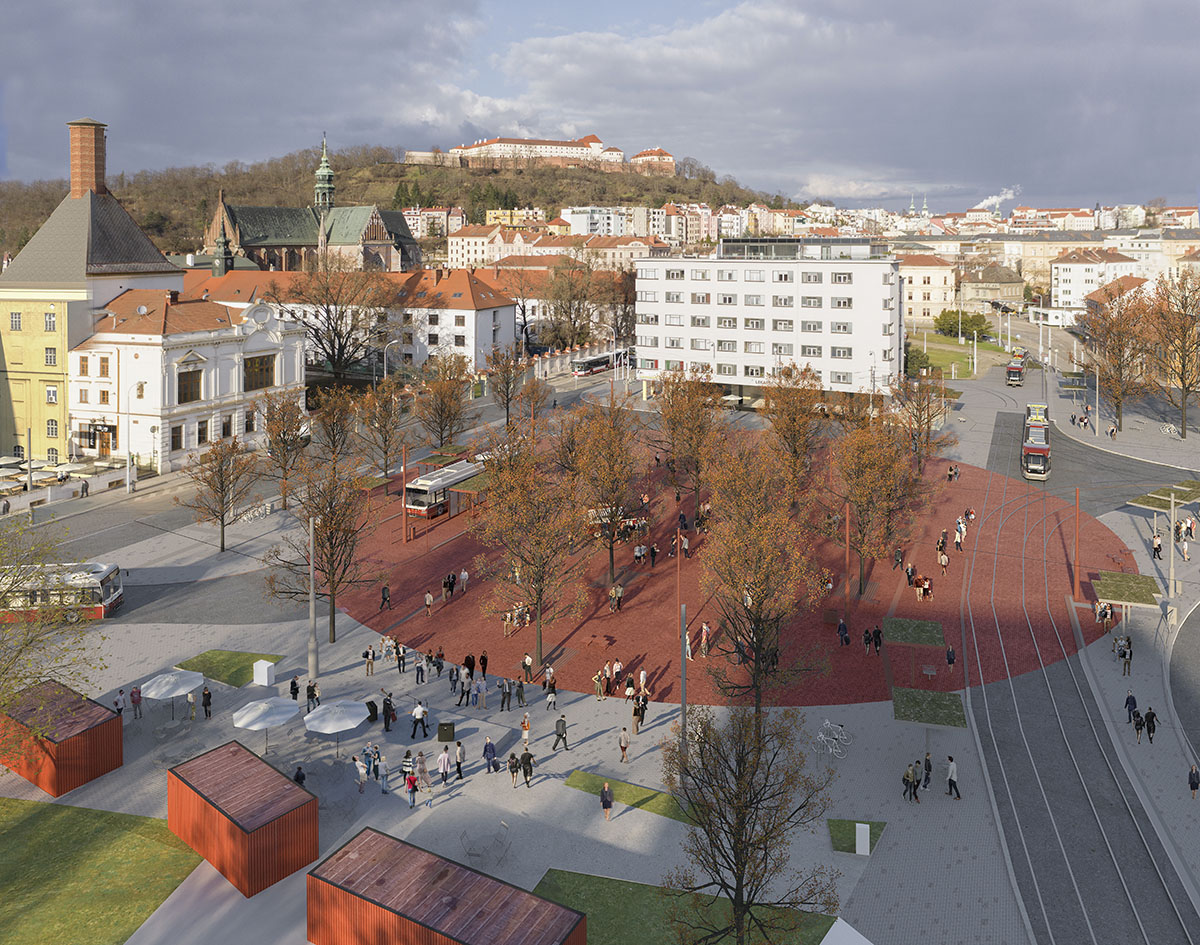 CHYBIK + KRISTOF and dílna have unveiled design for the transformation of a historic Mendel Square into a vibrant public, cultural and transportation hub in Brno, Czech Republic.

Developed as part of a large revival plan for the city, the new design pays homage to Brno’s rich cultural past - the new plans demonstrate CHYBIK + KRISTOF’s abiding engagement in preserving architectural heritage.

The new design scheme will be realized in collaboration with local landscape architect Zdenek Sendler and transportation engineering firm PK Ossendorf as the first phase of a larger revival plan for this focal part of the city.

The team transform the existing, decaying transportation hub into a vibrant public space, celebrating Brno’s cultural patrimony while rethinking the site as a functional entity adapted to contemporary social needs. 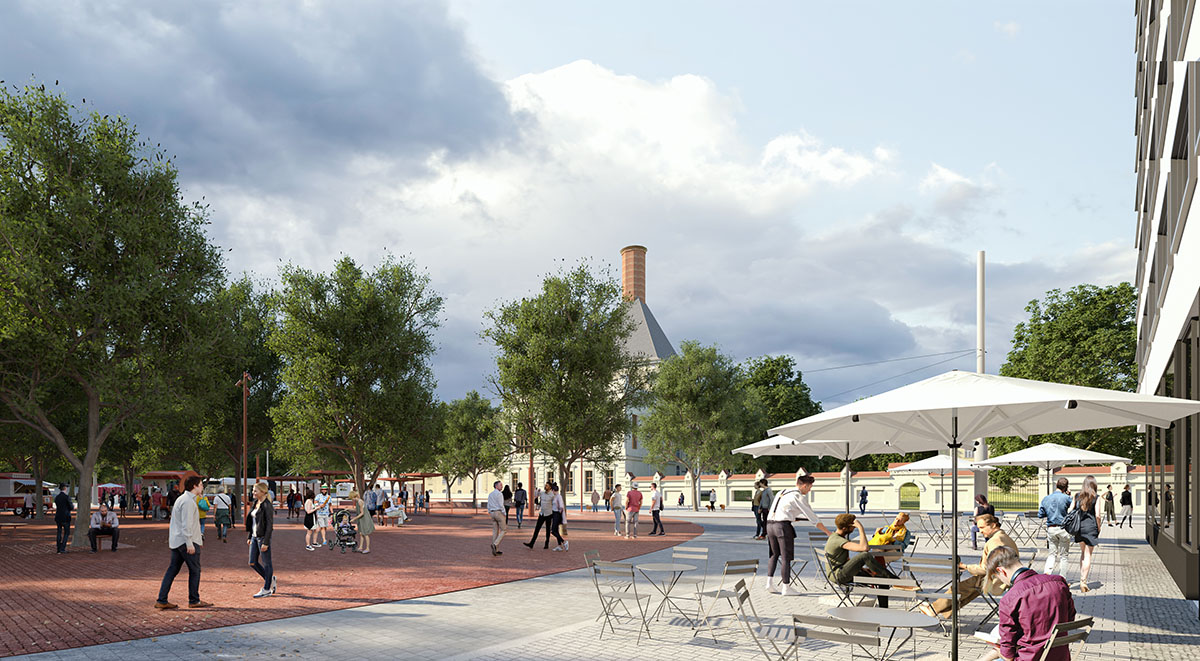 Mirroring much of Brno’s millennial architectural patrimony, Mendel Square has long foregone its historical significance to become one of the city’s primary transportation hubs, increasingly sidelined by its inhabitants as it fell to gradual deterioration.

CHYBIK + KRISTOF's design scheme pays a homage to the area’s multilayered history, the proposal engages with distinct periods of its past, reflected in the surrounding monuments, all-the-while placing the square as the marker of a new chapter in Brno’s historical and sociocultural narrative.

In the design process, the studio devised a comprehensive analysis from the area’s social dynamics, thus they turned Mendel Square into a a user-centered public space: accessible and functional. 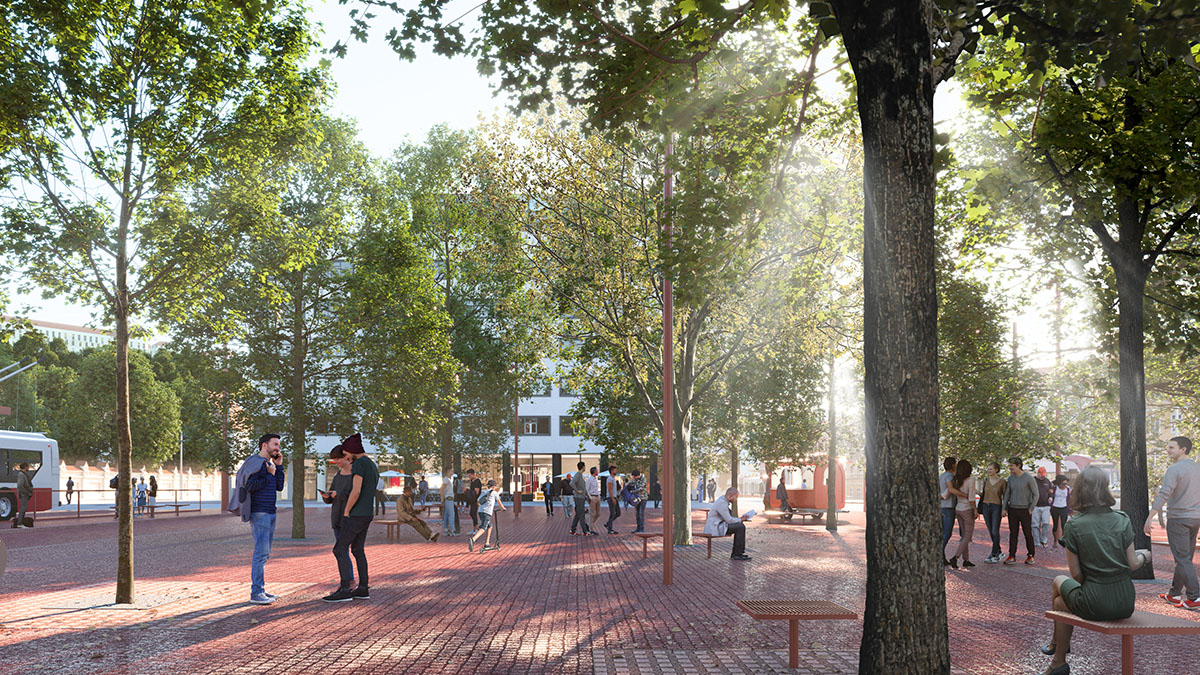 The transformation of the square was first initiated by Brno’s chief architect Michal Sedlacek in 2018. After an in-depth study of the area, Sedlacek and his team proposed a series of adjustments for a comprehensive reconstruction, which, following a local public competition, was awarded to dílna.

Working with local authorities and practitioners, including landscape specialist Zdenek Sendler and transportation engineering firm PK Ossendorf, CHYBIK + KRISTOF and dílna propose a multifaceted platform responsive to public needs, supplementing the transportation hub with a sociocultural dimension that has come to characterize many of the studio’s innovative and versatile designs.

Adopting a holistic social and technical approach, they reconnect it with the city and its inhabitants, affirming its ties with the past while ensuring its relevance for contemporary, and future, living. 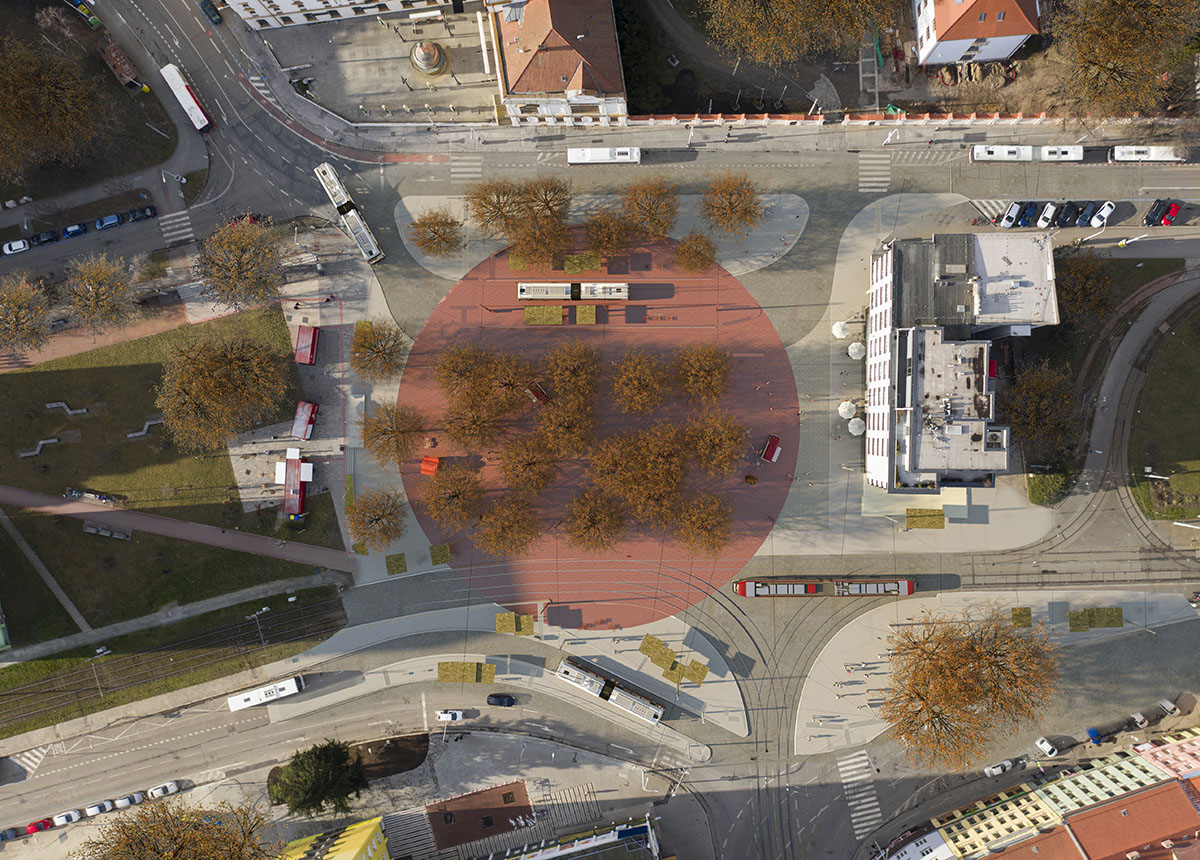 Mendel Square is located in the heart of Stare Brno, the oldest part of the town, Mendel Square finds itself at a cultural crossroads for the area. Looking out onto the 14th-century Basilica of Assumption of Our Lady, considered one of the Moravian region’s jewels of Gothic architecture, the square is bordered by the centennial Starobrno brewery and adjoining city walls, leading to the city’s towering Spilberk Castle.

Drawing on the history and scientific legacy of the site, CHYBIK + KRISTOF and dílna extend their revival of the original greenhouse to that of the eponymous neighboring square. Originally used as a public park, the square was damaged by air raids during the Second World War.

Rebuilt in the 1960s, shunned by the decades-long Communist regime, it became used for multimodal transport, adding onto its atypical typology composed of a 1930s Modernist solitaire building, Post-Modern structures from the 1970s, neoclassical city blocks, and forgotten landmarks. Soon losing its historical value, it was left subject to gradual and irrecoverable decay. 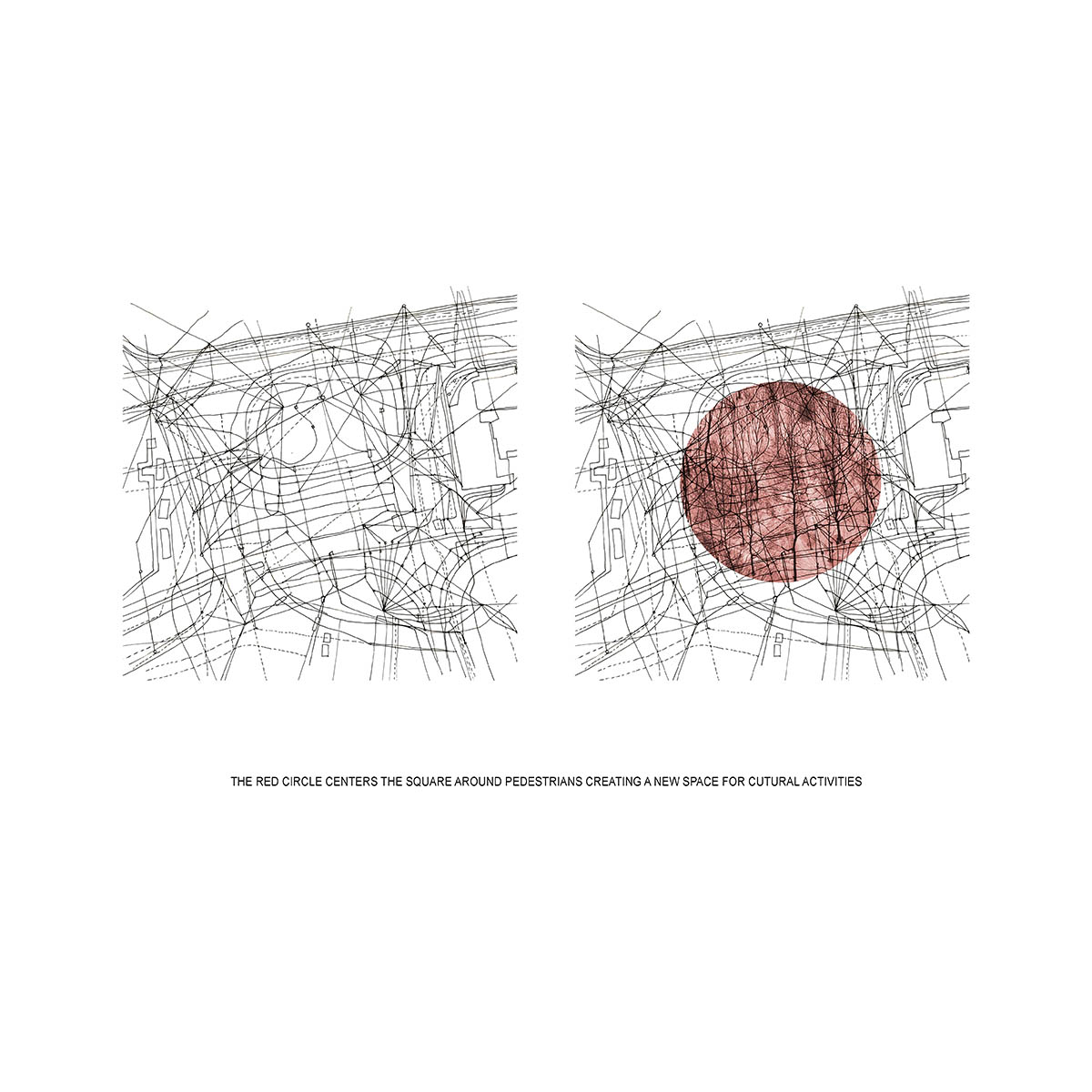 The read circle centers the square around pedestrians creating a new space for cultural activities.

"This site plays a central role for the area and for the interactions within it. Rather than opting for a typical four-sided structure, we unify all functions in a core, inclusive paved circle that redefines the space."

"Not only is it more intelligible, but it also considers the needs of all possible users – locals and foreigners, passengers and visitors, young and old generations alike," they added.

The team reorganizes the areas allotted to public transport and the residual green space from the previous layout, CHYBIK + KRISTOF and dílna revive and foster thriving social capital.

Creating a vast circular area, the square is conceived entirely barrier-free, accessible from all sides and visible from all angles. The architects use exclusively sustainable, reusable materials, they design new stops that ensure the fluid transition from tram and trolleybuses to municipal and regional bus lines.

By creating a walkable, inclusive space, the dynamic of the square moves from a place dominated by public transport and cars to a safe center for pedestrians, in turn redefining the flow for the rest of the square. The new design scheme fosters recreational use and cultural observation of the city’s assets as the focal point for their design. The team installs urban furniture in a modular layout, with movable benches that allows for various arrangements of the space.

Calling back to Brno’s signature aesthetics, the paved circle’s red tints reflect that of the bricks that adorn the neighboring Basilica and monastery, surrounded by grey tiles that evoke the dominant granite color in the rest of the city. And, honoring this pillar in the city’s cultural history, they elevate a new statue of Gregor Mendel at the very heart of the square. 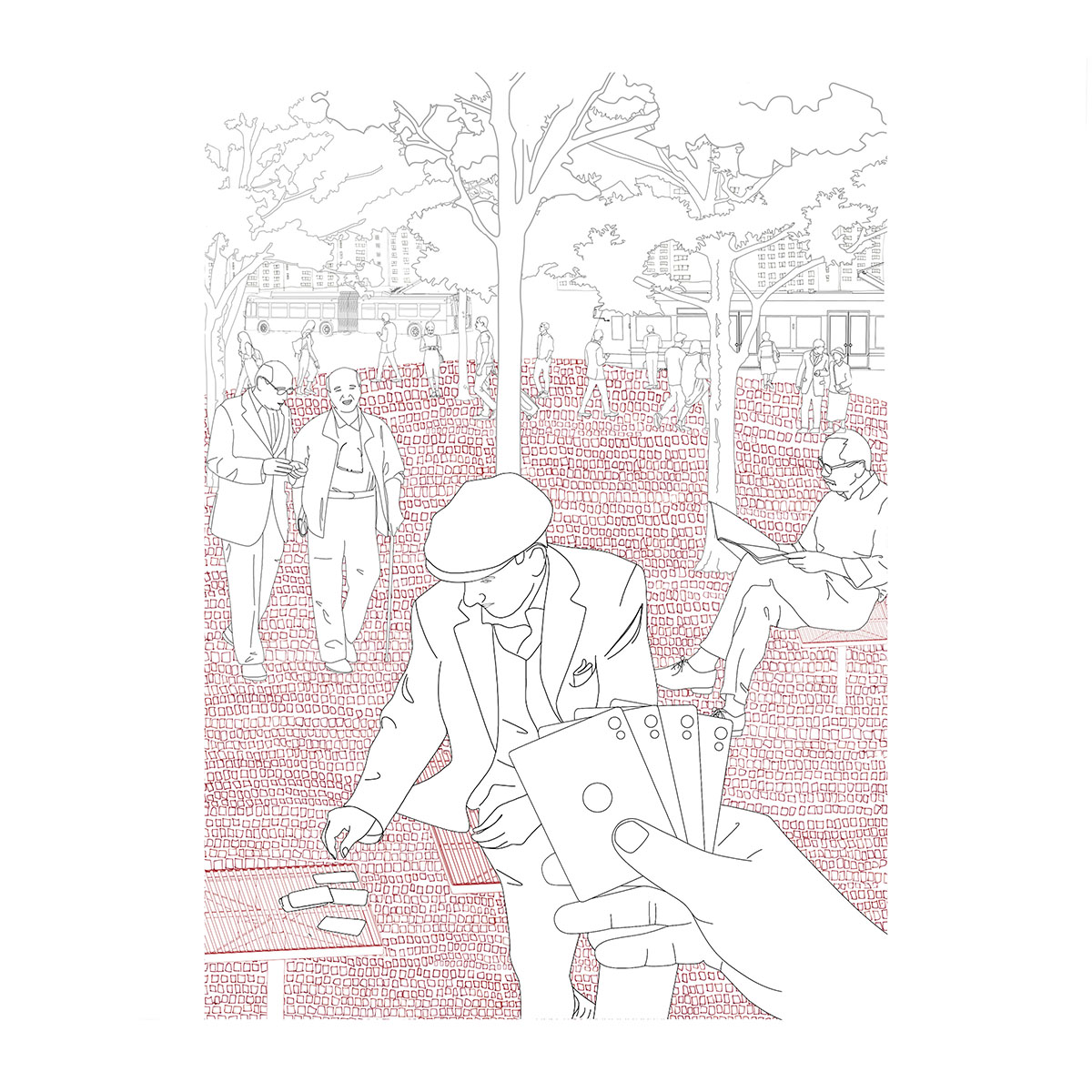 Their nature-friendly design, like that of the revived Mendel Greenhouse, references the scientist’s contributions. Erecting specifically bred tree species that retain more water while providing shade, they envision the square as the new lungs of the city, revisiting the greenhouse’s regulative properties and sustainable scheme. A water reservoir below the pavement ensures the flow between the roots, hereby supporting this new green community. Fusing transportation and cultural functions, CHYBIK + KRISTOF and dílna’s multifaceted design gives prominence to the notion of fluidity: within the square, and as it relates to the rest of the city.

Led in conjunction with the revival of the neighboring Mendel Greenhouse, Mendel Square is expected to be completed in July 2022 to coincide with the 200th anniversary of Gregor Mendel’s birth. 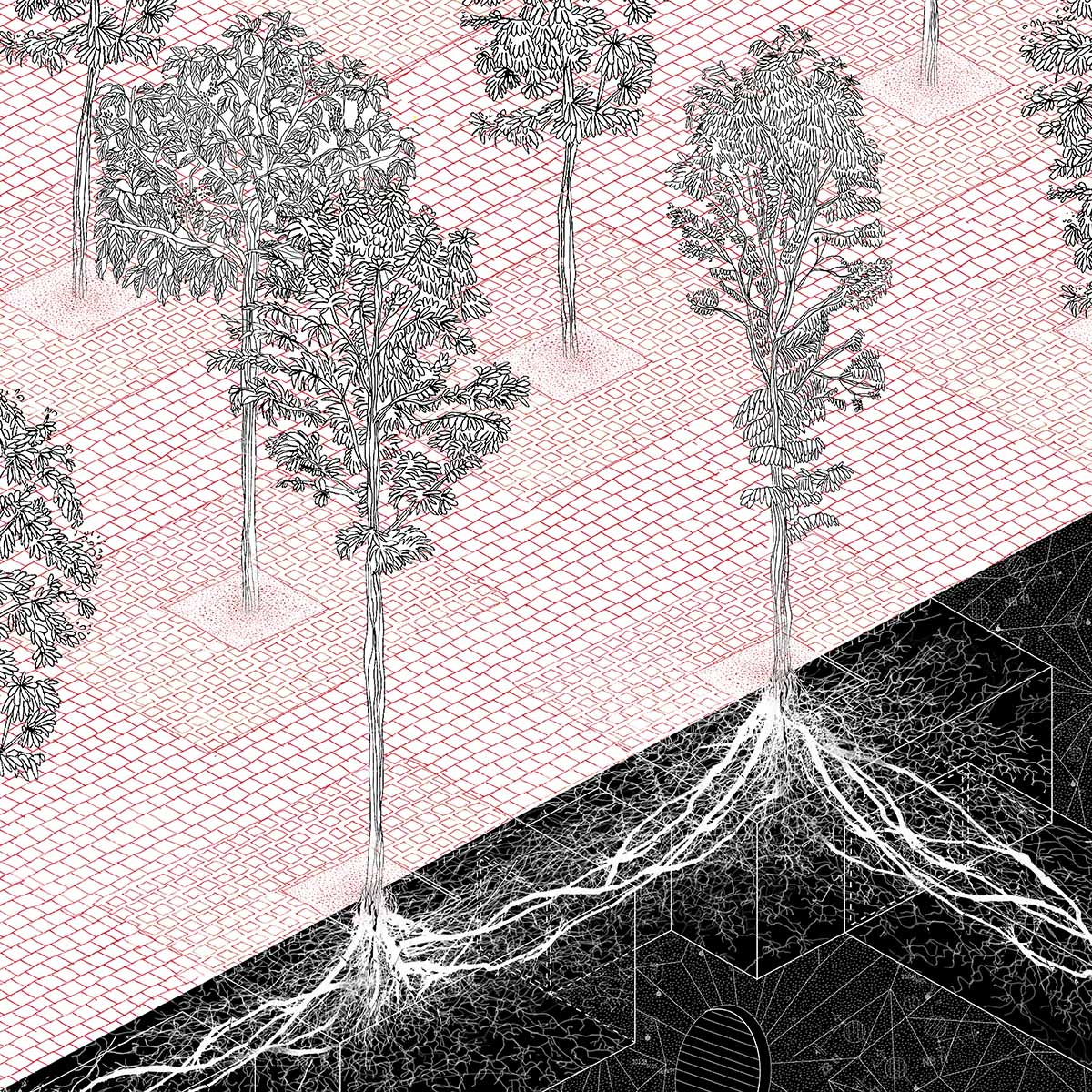 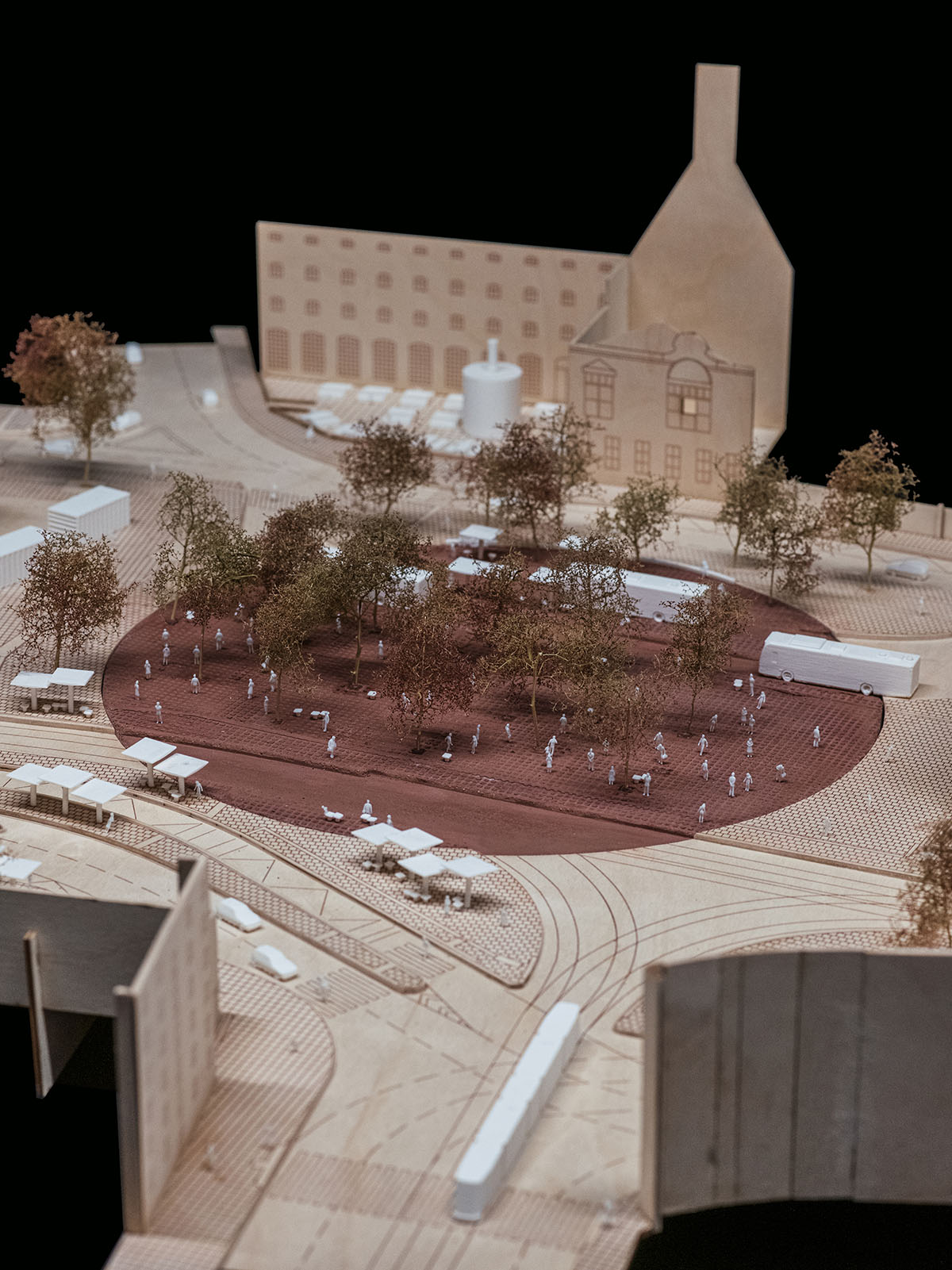 CHYBIK + KRISTOF previously completed the renovation of brutalist Zvonarka Central Bus Terminal in Brno. The firm is currently working on the design of a 19th Century Greenhouse in Brno.

CHYBIK + KRISTOF was founded by Ondřej Chybík and Michal Krištof in 2010.

All images courtesy of CHYBIK + KRISTOF.