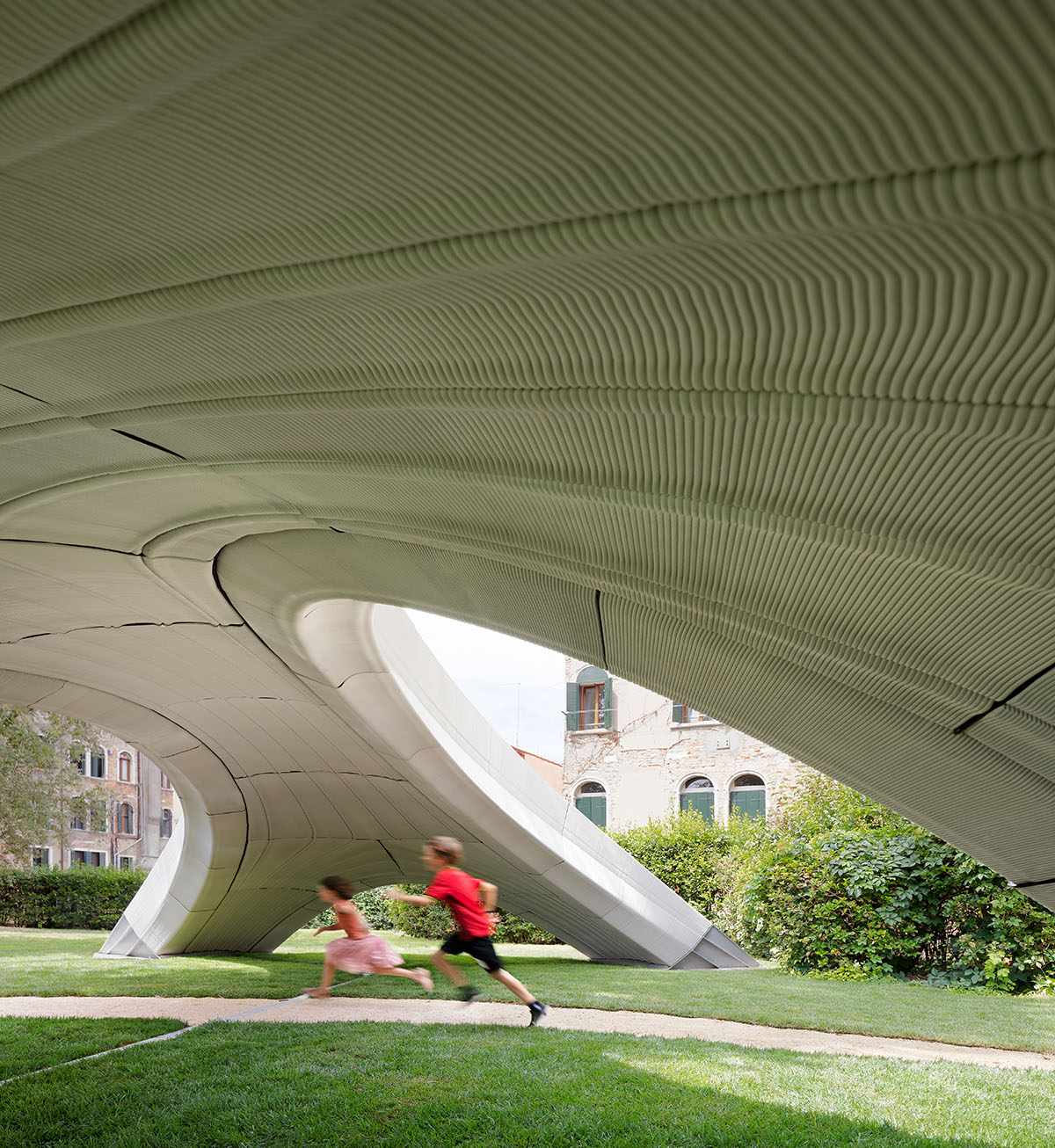 Zaha Hadid Architects together with the Block Research Group (BRG) at ETH Zurich and Zaha Hadid Architects Computation and Design Group (ZHACODE), in collaboration with incremental3D (in3D) and Holcim have completed an arched masonry footbridge at the Giardini della Marinaressa in Venice, Italy.

The project, named Striatus, is exhibited during the 2021 Venice Architecture Biennale until November 2021 and was developed as "the first of its kind", measuring by 16 x 12 metre footbridge.

The design of the bridge proposes a new language for concrete in terms of its structurally-informed, fabrication technique, ecologically responsible and precisely placed to build more with less. 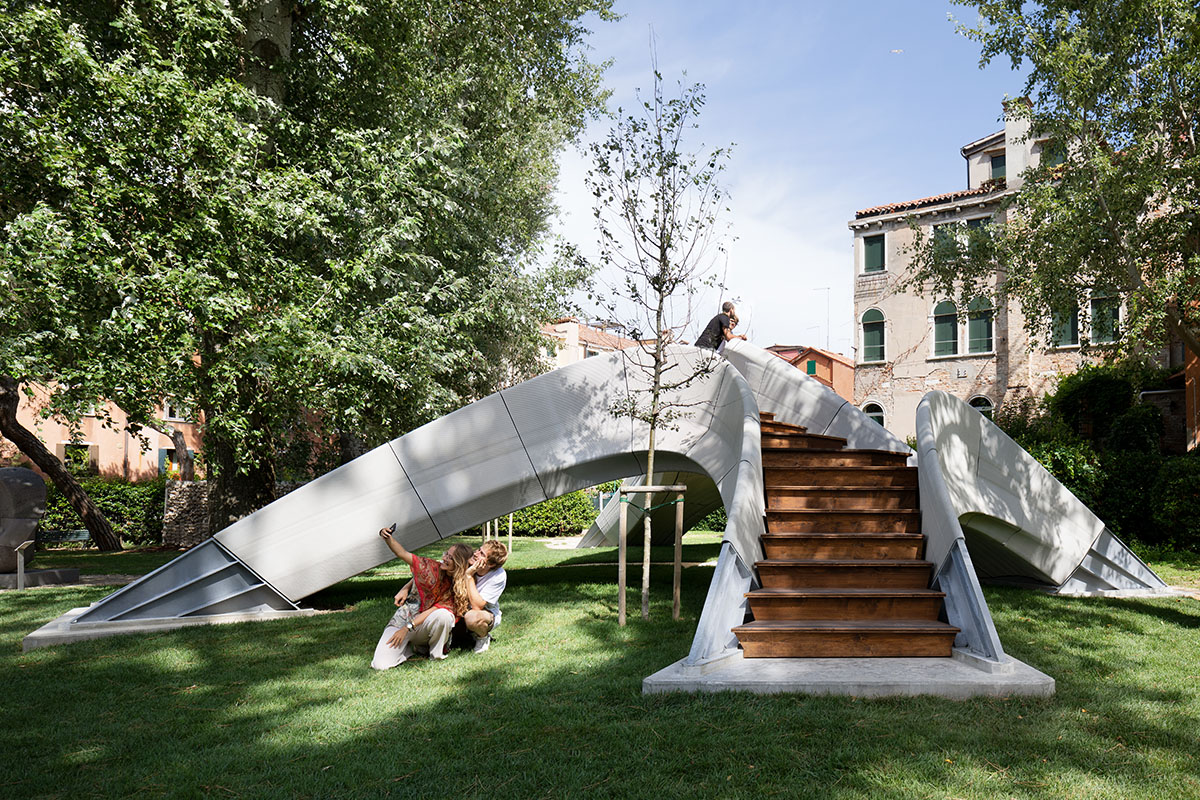 As ZHA explains, the name “Striatus” reflects its structural logic and fabrication process. "Concrete is precisely printed in layers orthogonal to the main structural forces to create a “striated” compression-only structure that requires no mortar or reinforcement," the firm adds.

As this construction does not need mortar, the blocks can be dismantled and reassembled at a different location. If the construction is no longer needed, the materials can simply be separated and recycled.

3D printing can be used to build load-bearing concrete structures that require significantly less material and no steel reinforcement or mortar. ETH architects and engineers from the Block Research Group in collaboration with Zaha Hadid Architects and other partners from industry showed how this works with a footbridge in Venice. 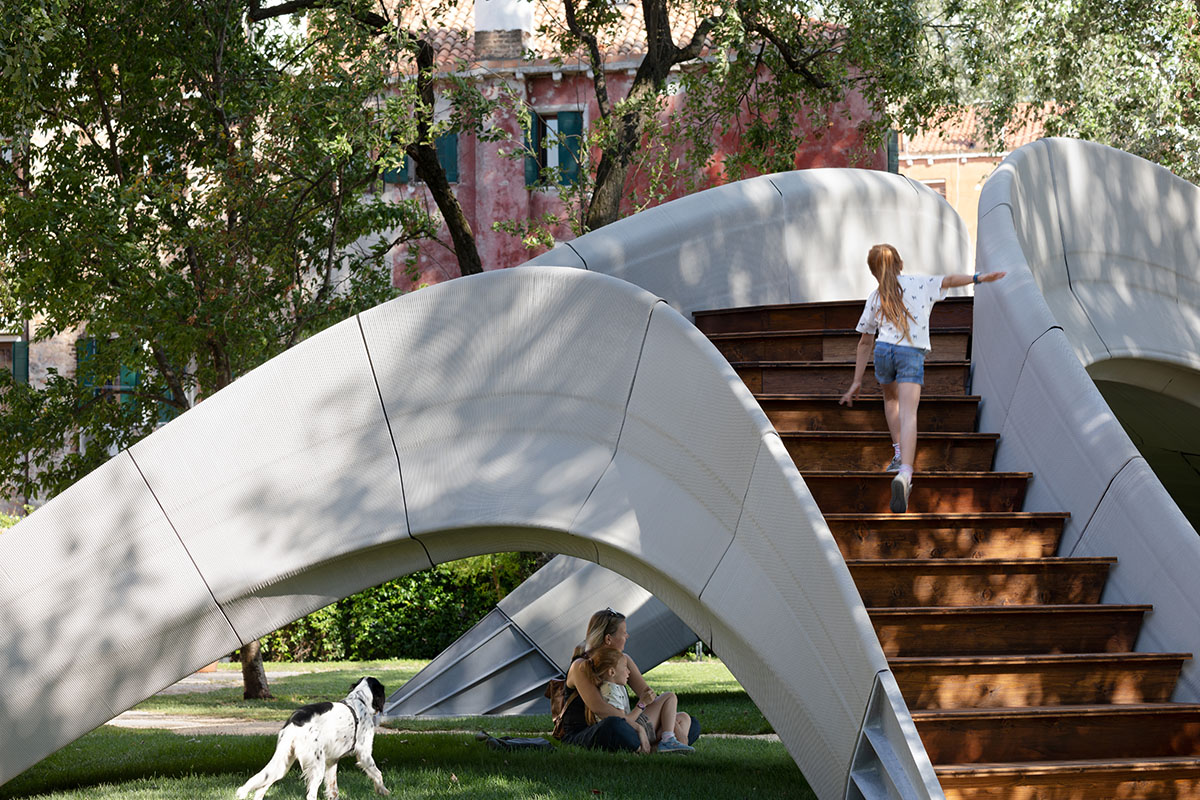 Millions of new buildings all over the world are being constructed with reinforced concrete, even though this type of construction generates large amounts of CO2 emissions. The steel used for the reinforcement and the cement for the concrete are especially problematic in this regard. ETH researchers have now presented a way to reduce both, in a real project.

Zaha Hadid Architects and ZHACODE teamed up with the Block Research Group to build a 12-by-16-metre arched footbridge in a park in Venice – entirely without reinforcement.

As the team used an additive process, so the construction is dubbed “Striatus” which was built with concrete blocks that form an arch much like traditional masonry bridges. 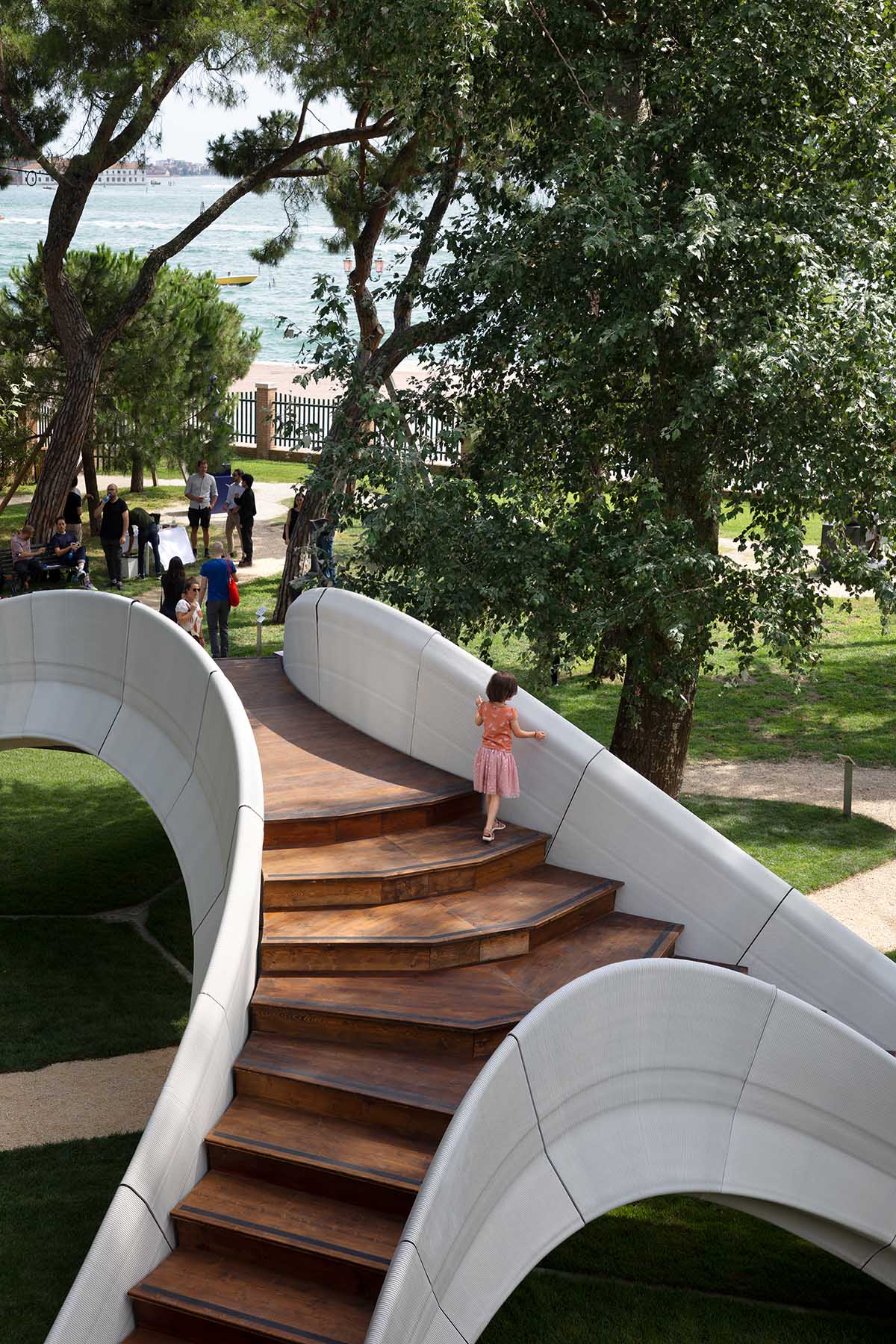 As the team highlights, this compression-only structure allows the forces to travel to the footings, which are tied together on the ground. The dry-assembled construction is stable due to its geometry only. The bridge was printed in specific angles

What is completely new is the type of 3D-printed concrete, which the researchers developed together with the company Incremental3D.

The concrete is not applied horizontally in the usual way but instead at specific angles such that they are orthogonal to the flow of compressive forces. This keeps the printed layers in the blocks nicely pressed together, without the need for reinforcement or post-tensioning.

The special concrete ink for the 3D printer was developed by the company Holcim precisely for this purpose.

"This precise method of 3D concrete printing allows us to combine the principles of traditional vaulted construction with digital concrete fabrication to use material only where it is structurally necessary without producing waste," said ETH professor Philippe Block. 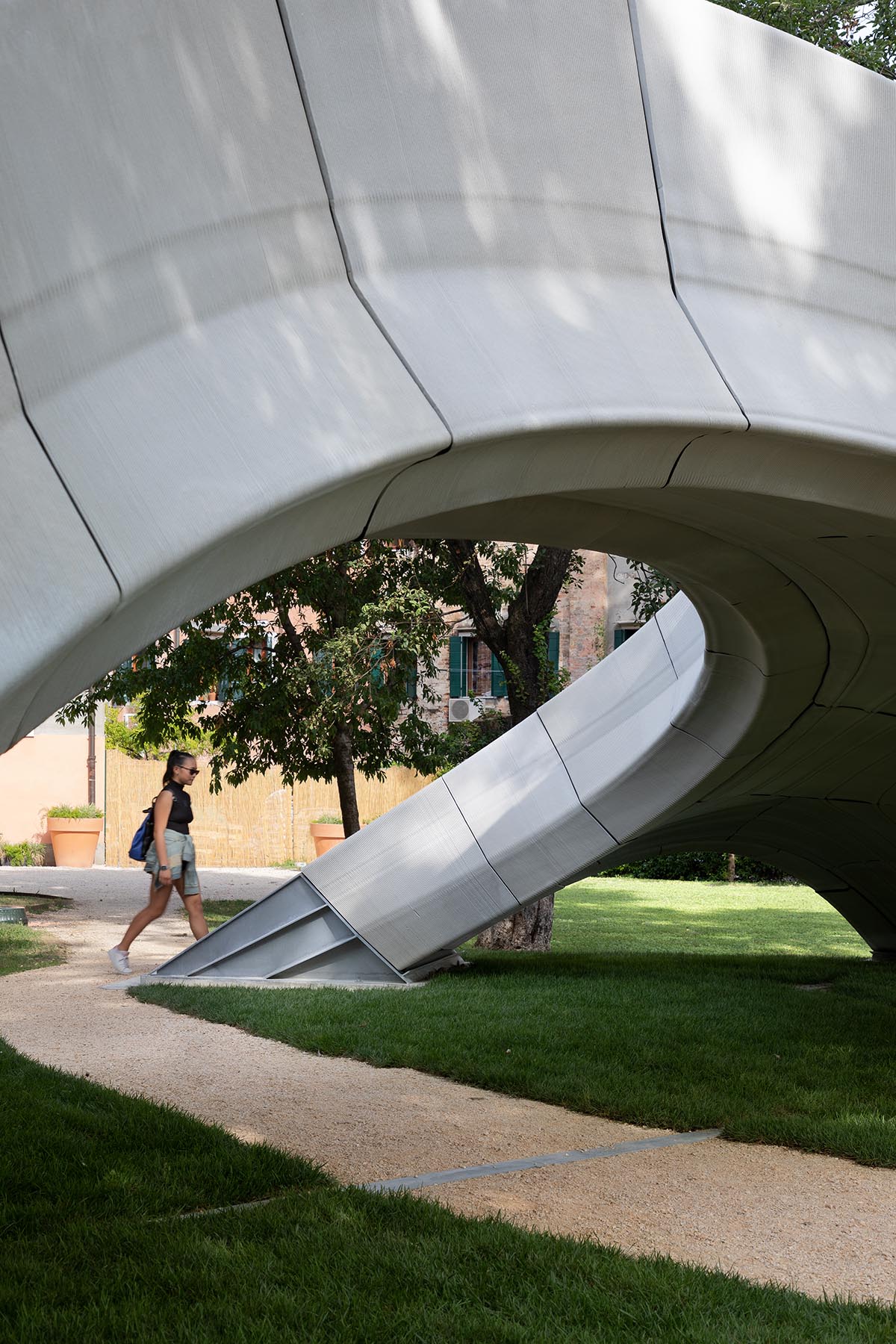 Strength is provided through geometry

Striatus is an unreinforced concrete structure that achieves strength through geometry. Concrete can be considered an artificial stone that performs best in compression. In arched and vaulted structures, material can be placed precisely so that forces can travel to the supports in pure compression. Strength is created through geometry, rather than an inefficient accumulation of materials as in conventional concrete beams and flat floor slabs. This presents opportunities to significantly reduce the amount of material needed to span space as well as the possibility to build with lower-strength, less-polluting alternatives.

Striatus’ bifurcating deck geometry responds to its site conditions. The funicular shape of its structural arches has been defined by limit analysis techniques and equilibrium methods, such as thrust network analysis, originally developed for the structural assessment of historic masonry vaults; its crescent profile encompasses the thrust lines that trace compressive forces through the structure for all loading cases. Steel tension ties absorb the horizontal thrust of the arches. Neoprene pads placed in between the dry-assembled blocks avoid stress concentrations and control the friction properties of the interfaces, echoing the use of lead sheets or soft mortar in historical masonry construction.

In plan, the boundaries of the structure form deep arches that transfer horizontal loads (for example, from visitors leaning against the balustrades) to the supports in pure compression. Advanced discrete element modelling (DEM) was used to refine and optimise the blocks’ stereotomy and to check stability of the entire assembly under extreme loading cases or differential settlements of the supports.

The bridge’s 53 3DCP voussoirs have been produced using non-parallel print layers that are orthogonal to the dominant flow of forces. This avoids delamination between the print layers as they are held together in compression. The additive manufacturing process ensures the structural depth of the components can be achieved without producing blocks with a solid section, hence reducing the amount of material needed compared to subtractive fabrication methods or casting.

Striatus follows masonry structural logic on two levels. As a whole, the bridge behaves as a series of leaning unreinforced voussoir arches, with discretisations orthogonal to the dominant flow of compressive forces, following the same structural principles as arched Roman bridges in stone. Locally, on the level of the voussoir, the 3DCP layers behave as traditional brick masonry evident in the inclined rows of bricks within Nubian or Mexican vaulting. 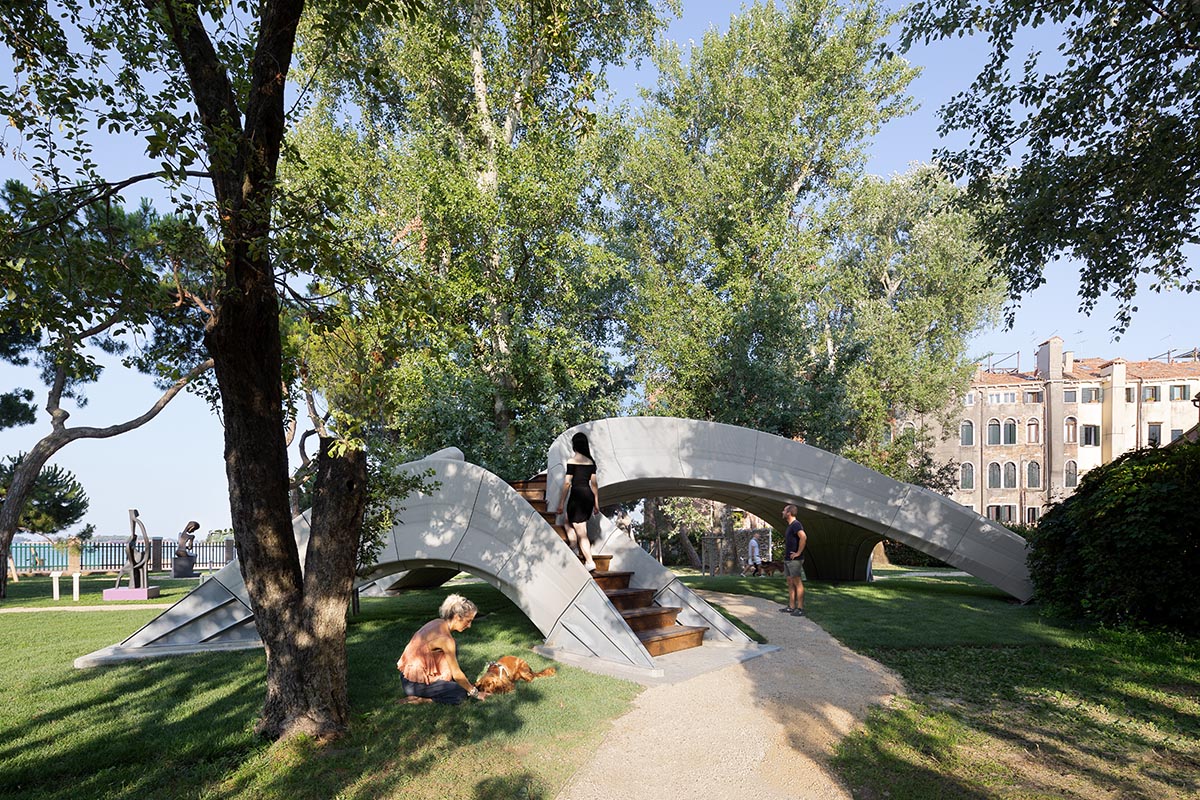 The design follows the principles of circular design. As ZHA explains, Striatus places material only where needed, significantly reducing its environmental footprint.

Built without reinforcement and using dry assembly without binders, Striatus can be installed, dismantled, reassembled and repurposed repeatedly; demonstrating how the three R’s of sustainability (Reduce, Reuse, Recycle) can be applied to concrete structures.

"The precise manufacturing of the blocks was enabled by well-defined data exchange between the various domain-specific software toolchains involved in the process."

"This co-development approach was facilitated through the use of COMPAS, an open-source computational framework for collaboration and research in the AEC industry, which enabled the fluent interaction among the key players of the project, working together in five different countries, under a very tight schedule and budget, at a time in which travelling was not possible," the firm added. 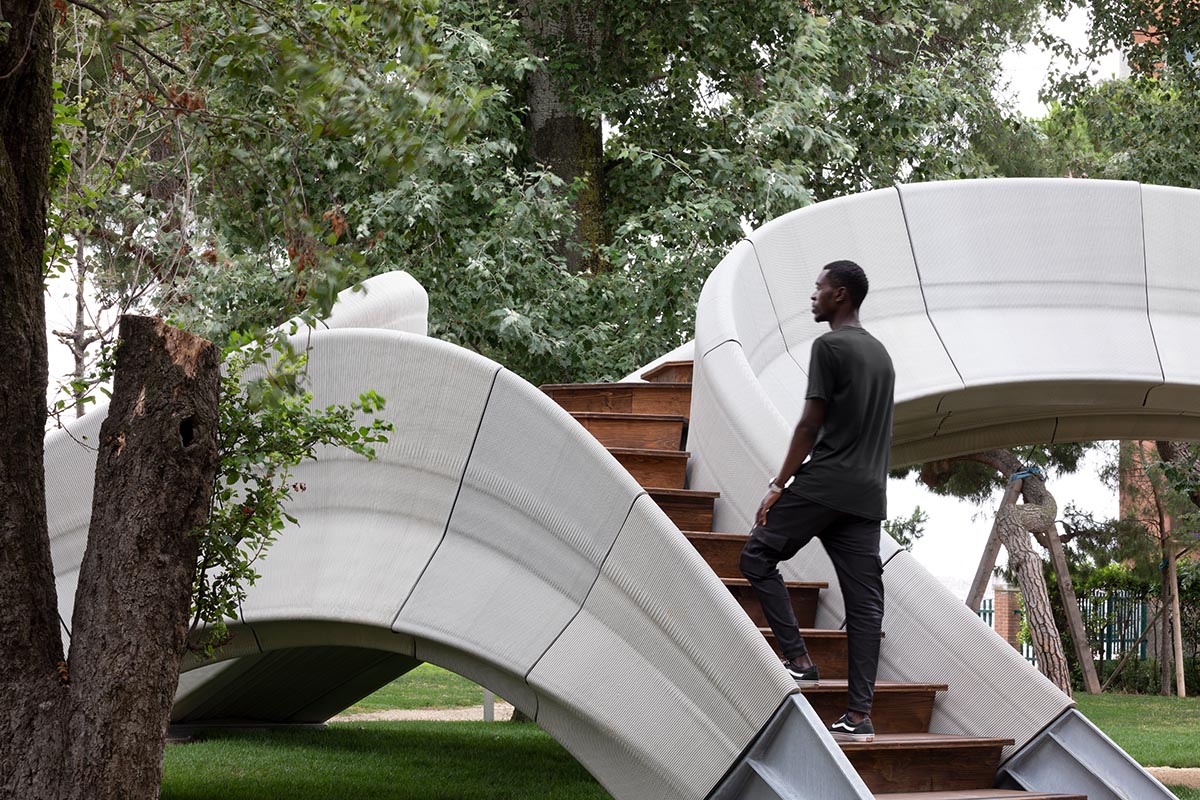 Zaha Hadid Architects added that when the structure is compared to typical reinforced-concrete flat floor slabs, this new floor system uses only 30% of the volume of concrete and just 10% of the amount of steel.

"The very low stresses within the funicular structure also enable the use of low-embodied-carbon concrete that incorporates high percentages of recycled construction waste," ZHA continued. 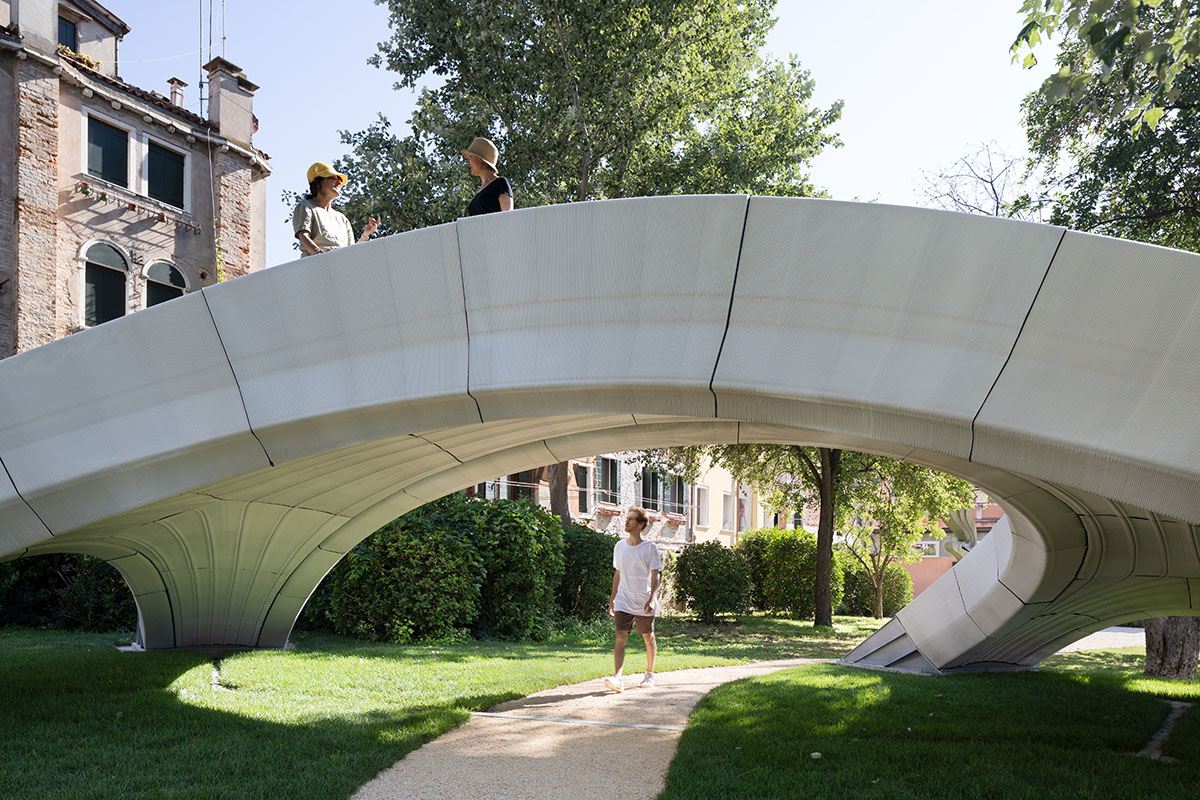 "Prefabricated and dry-assembled, and therefore fully demountable and reusable, this floor system is easily and cleanly recyclable at end-of-life."

"With an estimated 300 billion square metres of floor area to be constructed worldwide over the next 30 years, and floors comprising more than 40% of the weight of most high-rise buildings (10+ storeys), introducing the principles demonstrated by Striatus would truly disrupt the construction industry — transforming how we design and construct our built environment to address the defining challenges of our era," ZHA added. 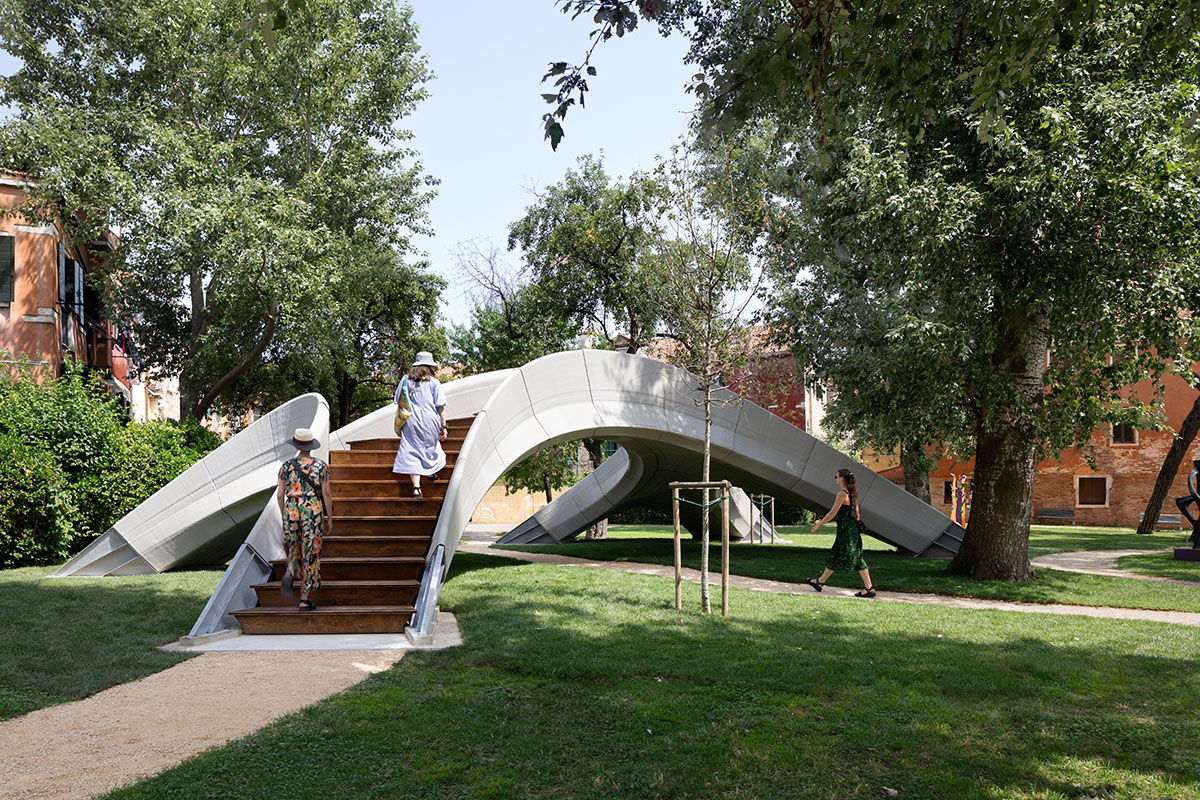 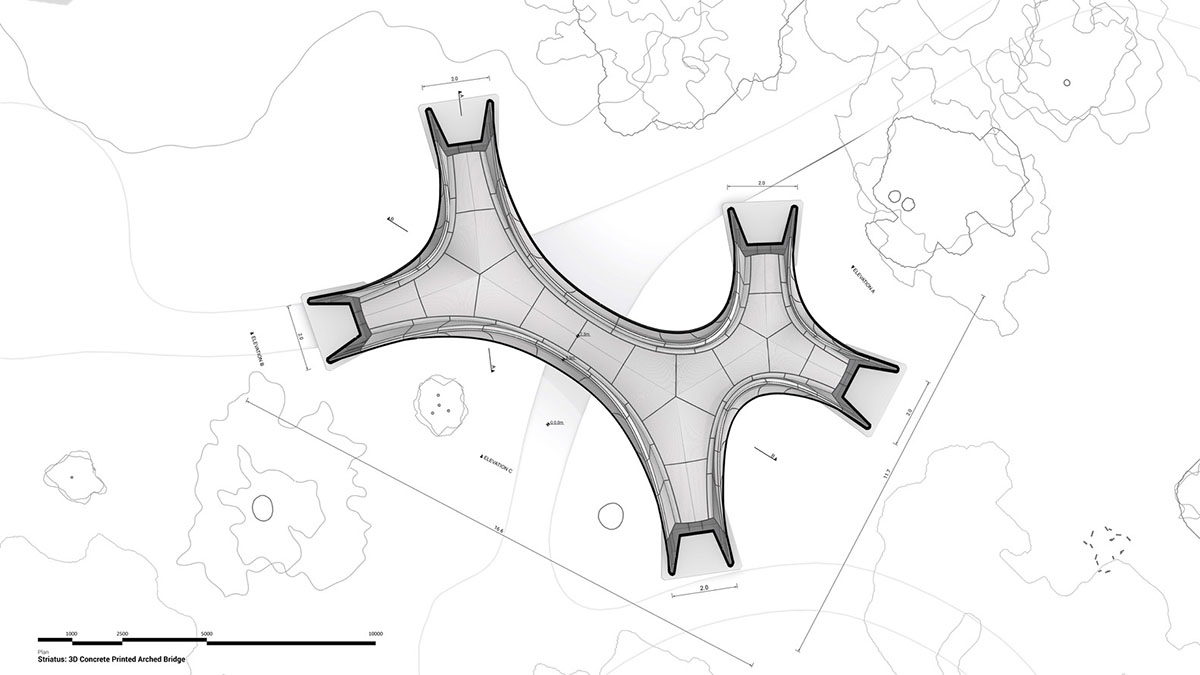 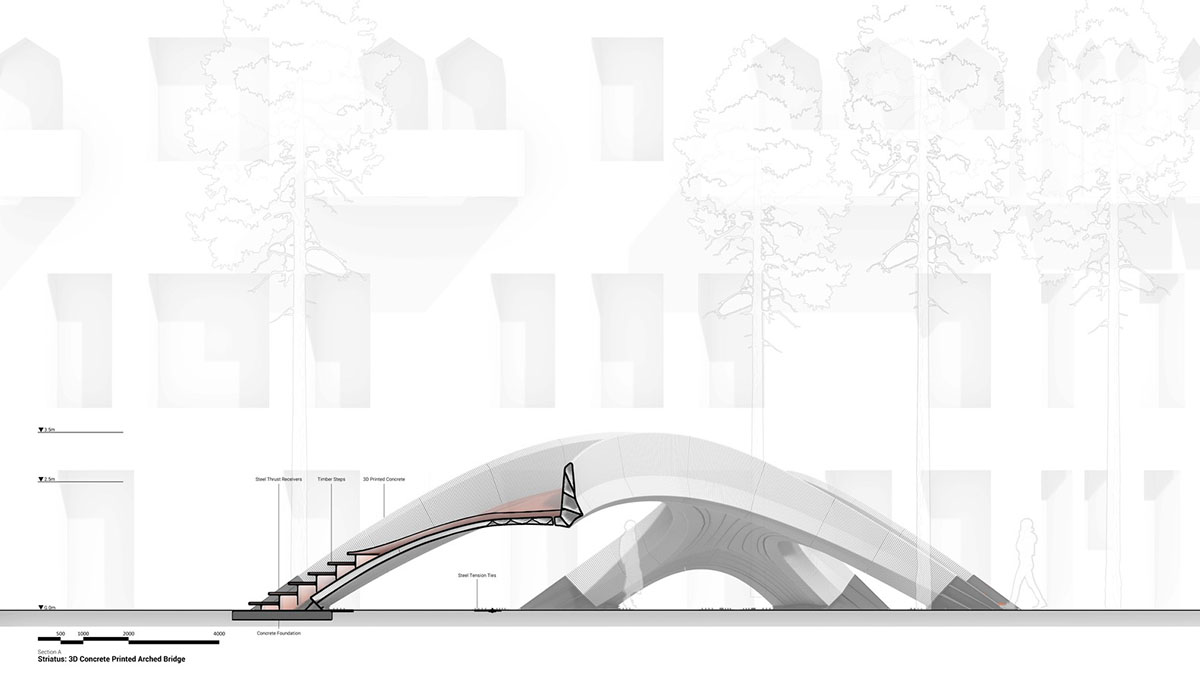 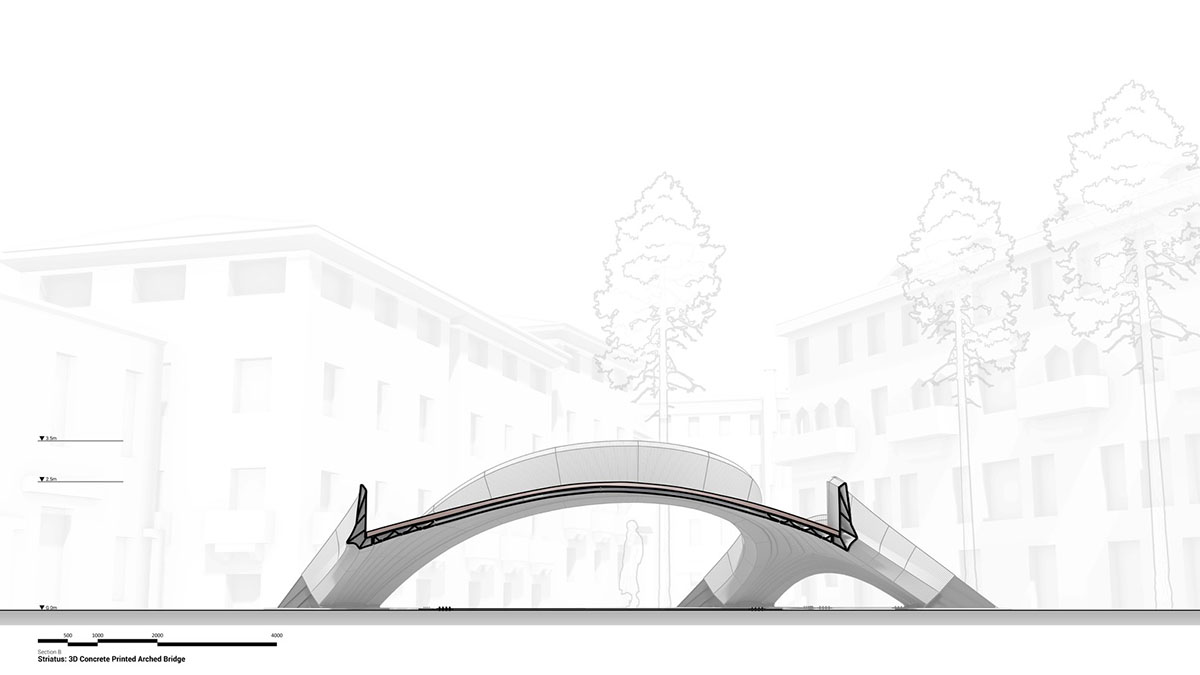 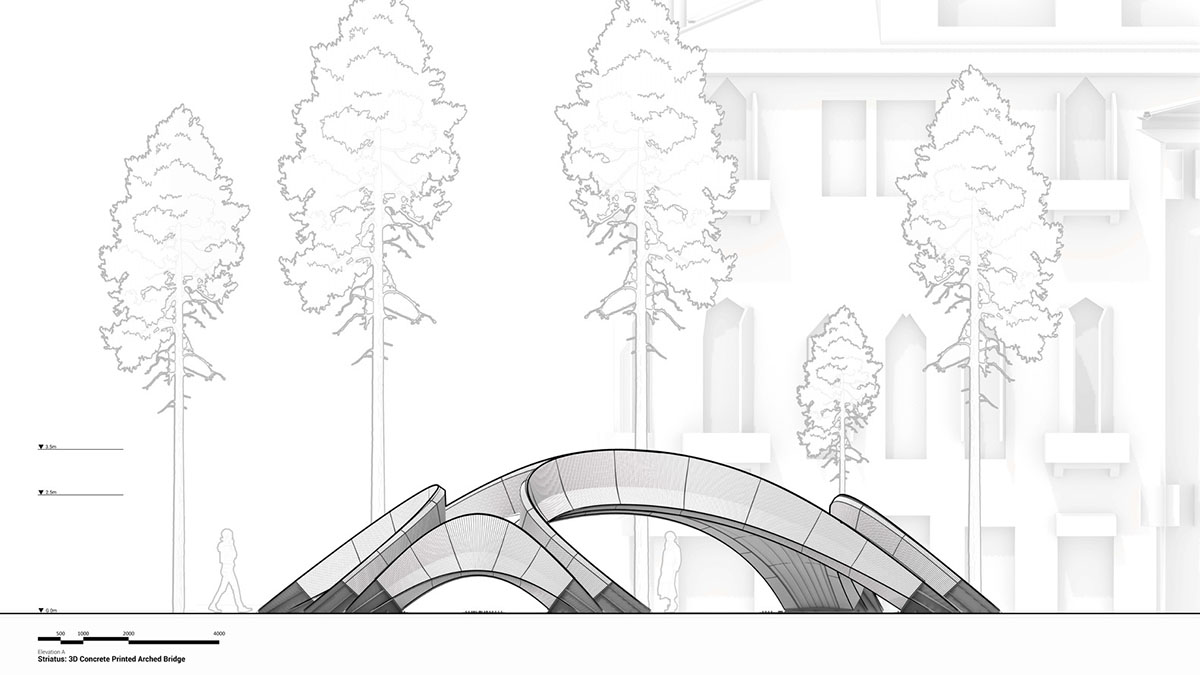 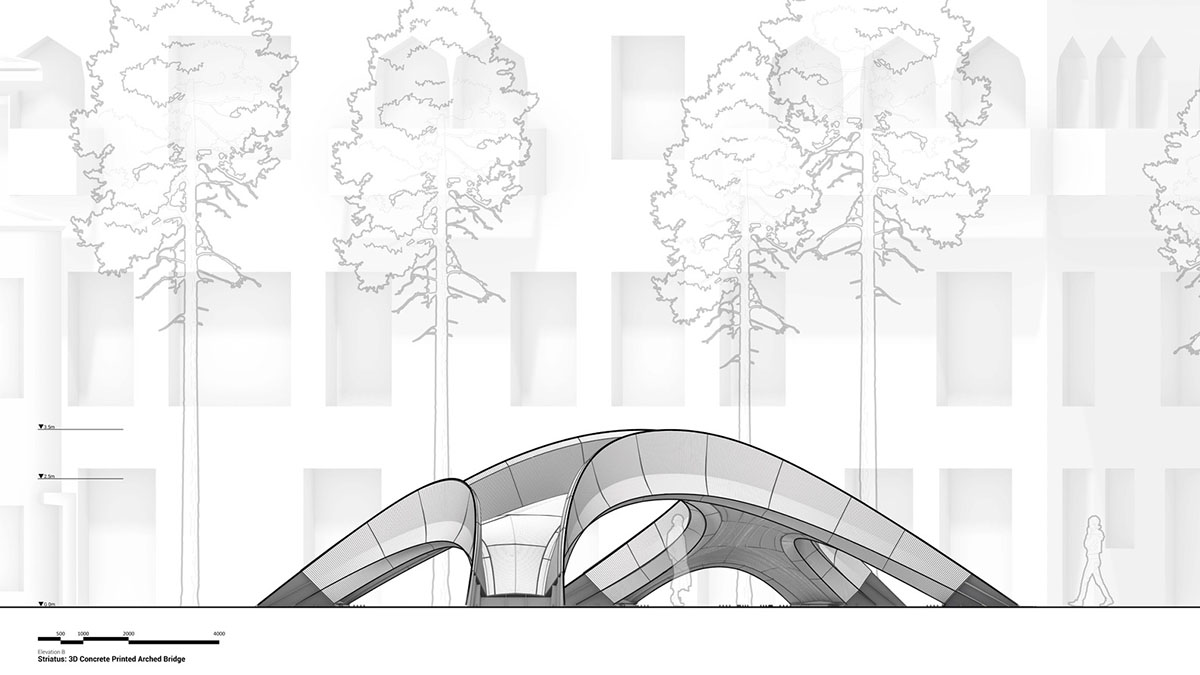 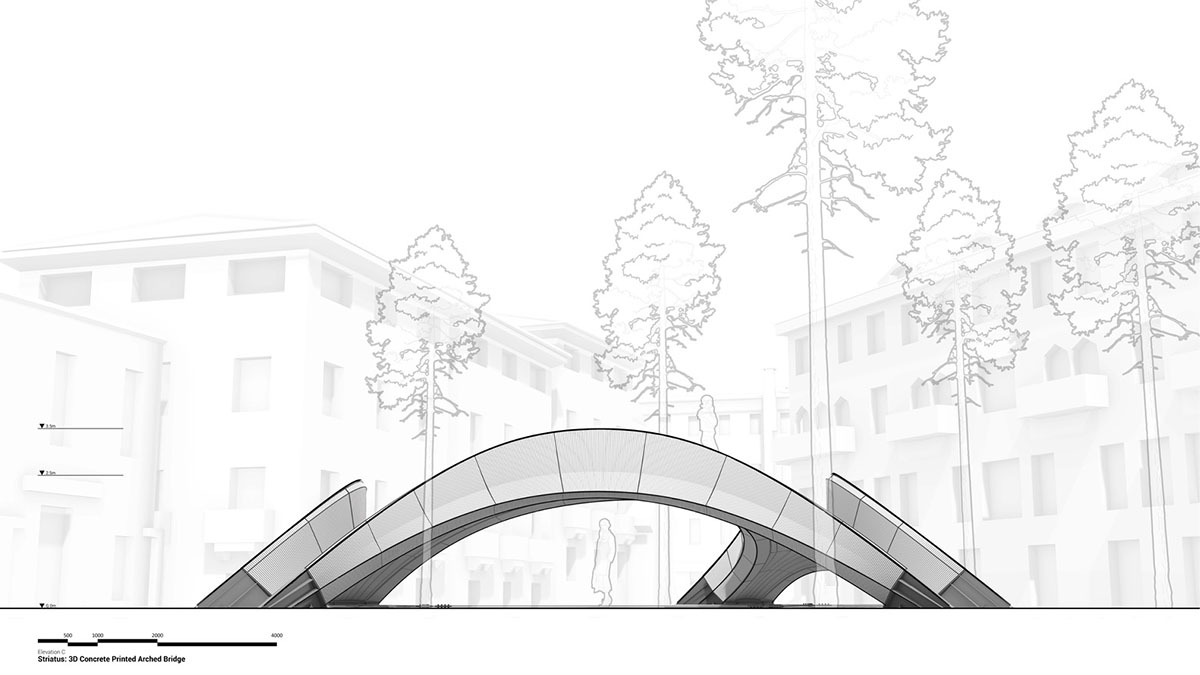