Limitations and Creativity in Designing Building Facades in Iran 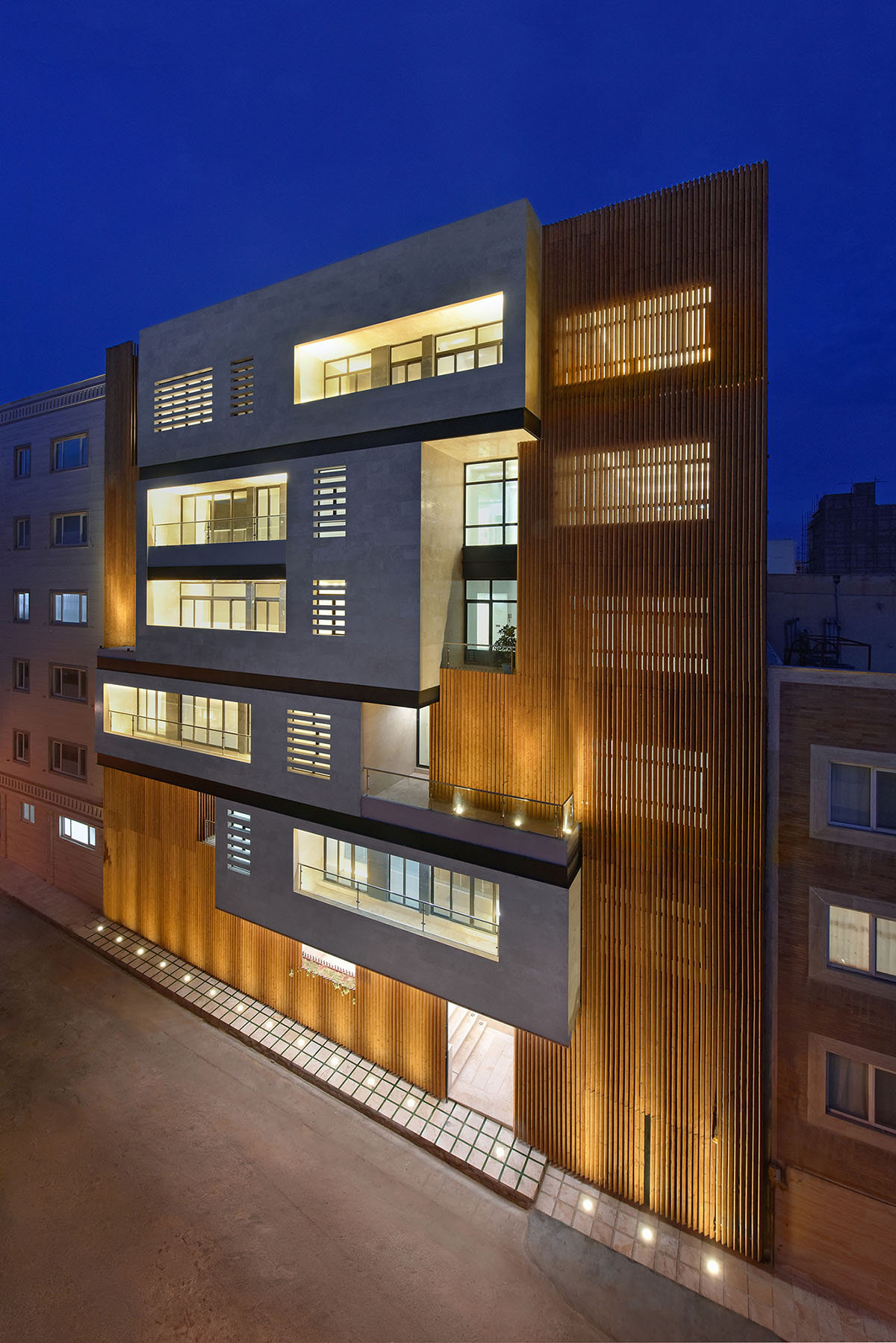 The buildings that are formed in the urban context and body in regard to the criteria and regulations of municipality have different challenges and limitations in Iran. According to these limitations and rules, most of building facades typically have a same facade dictated and certain plans that prevent any creativity, dynamism and spatial quality within and out of the project, as well as the connection between the interior and exterior of the building is not created. Considering the rules, establishing an acceptable biological quality project in this context requires a change in attitude towards municipality criteria.

The mentioned rules and limitations can be changed according to the city and also the usage of the building. The residential, official and commercial buildings have different rules.

But if we want to search and study the quality of creativity with details, we have to focus on one of these usage which again because of these limitations has no variety; “The Residential Buildings”.

Sometimes, like many other countries and their municipalities, some solutions can be found to break some of these rules, but the economy and wealth can not always create creativity!

Among these residential buildings which we can be seen in any part of cities, sometimes we can find the creative ones which have been designed by young creative architects which keep the creativity beside limitations.

Salariyeh is one of these residential buildings that has been formed in the city of Qom and aggregation two lands together. According to the rules and regulations of the municipality of Qom city, the central portion of the building allow to use the consular to a depth of 120 cm and at least the maximum allowable length of the console from the neighbors on one side of two meters and the other four meters. 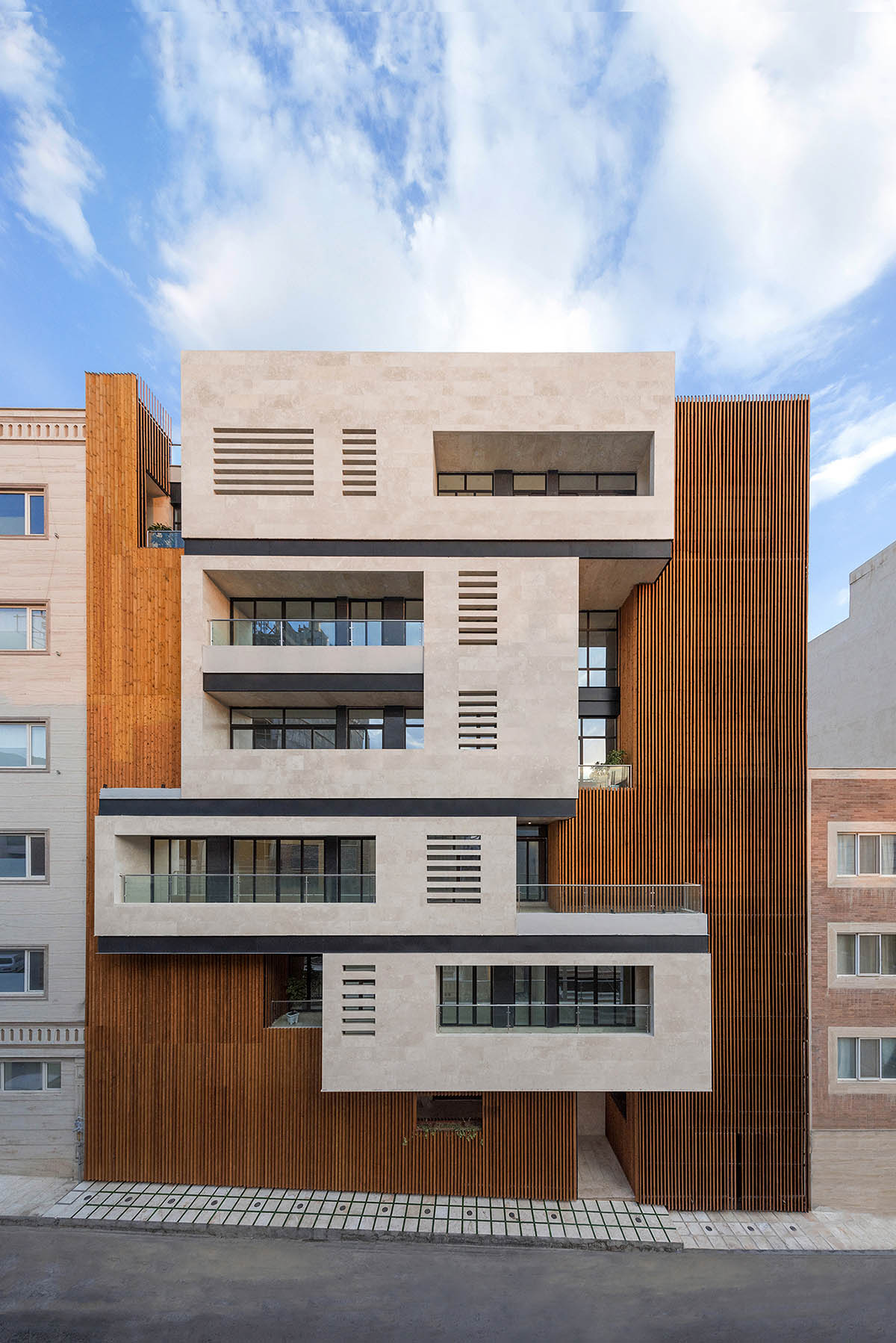 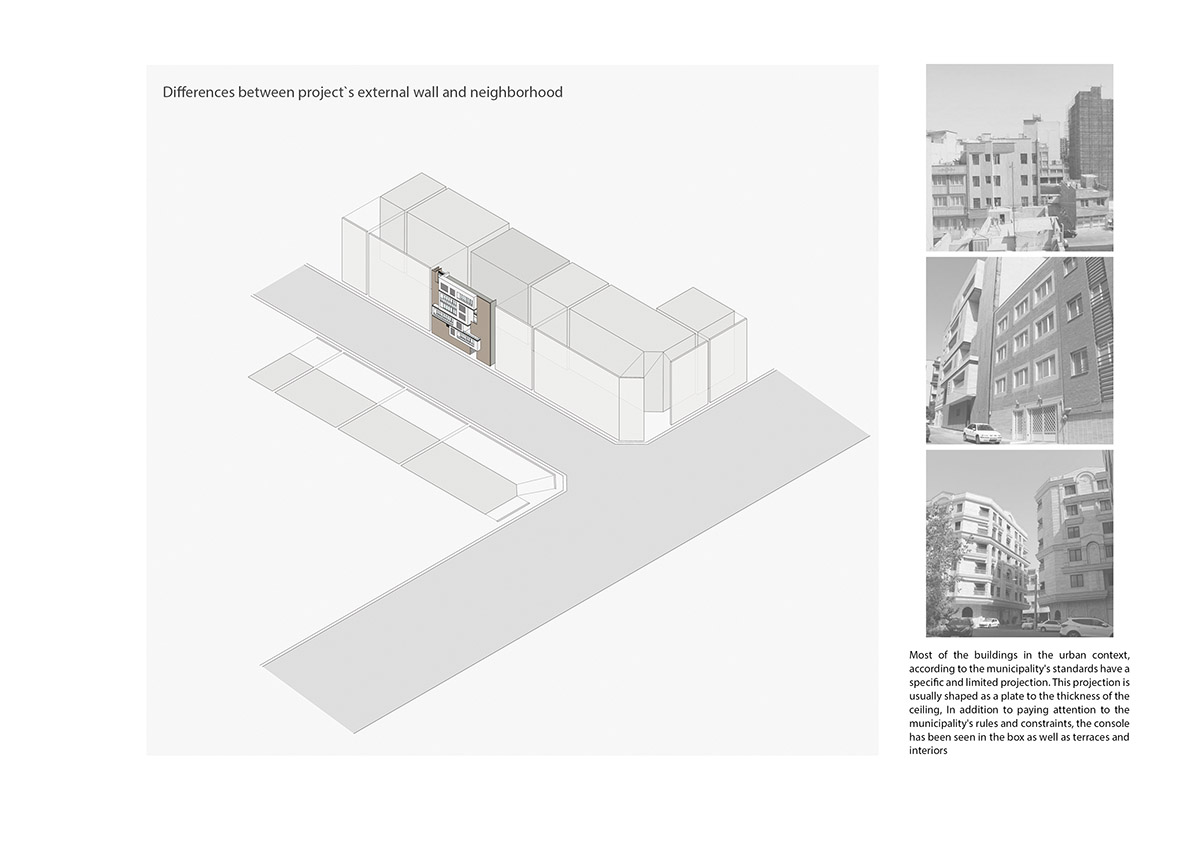 The Neighbors and City Rules

In this article, we will study the quality of creativity in our case study, Salariyeh Residential Building by Heram Architects (Morteza Alinia Moghadam-Hamid Babaei), to see how this young architectural group have tried to solve the municipality of city and do the their best in creativity.

The project is located in the city of Qom. According to the importance of religious and geographical importance, growth and development, this city is faced with many challenges. Formation of collective settlements is one of the inevitable consequences of growth in this city. In parallel,  religious beliefs play an important role in urban decision making and neighborhood relationships. The issue of "privacy" and "lack of visibility from the exterior into the building" is very popular and one of the main challenges of design.  In this project, it is tried to look at other issues from the angle, so that instead of installing thick and multi-layer curtains from the inside to prevent them from seeing out and restricting the entrance of light to the house, by creating a design in addition to responding to the creation of privacy for the house and the lack of direct view from outside to the inside, it can also provide the maximum amount of light entering. In regard to this project from aggregation two lands has been formed, it had a larger scale and a larger number of classes than the neighboring context and the neighborhoods around them. The high width of the building, the number of residential units and the large number of openings on the exterior walls were the main concerns and challenges facing the project. 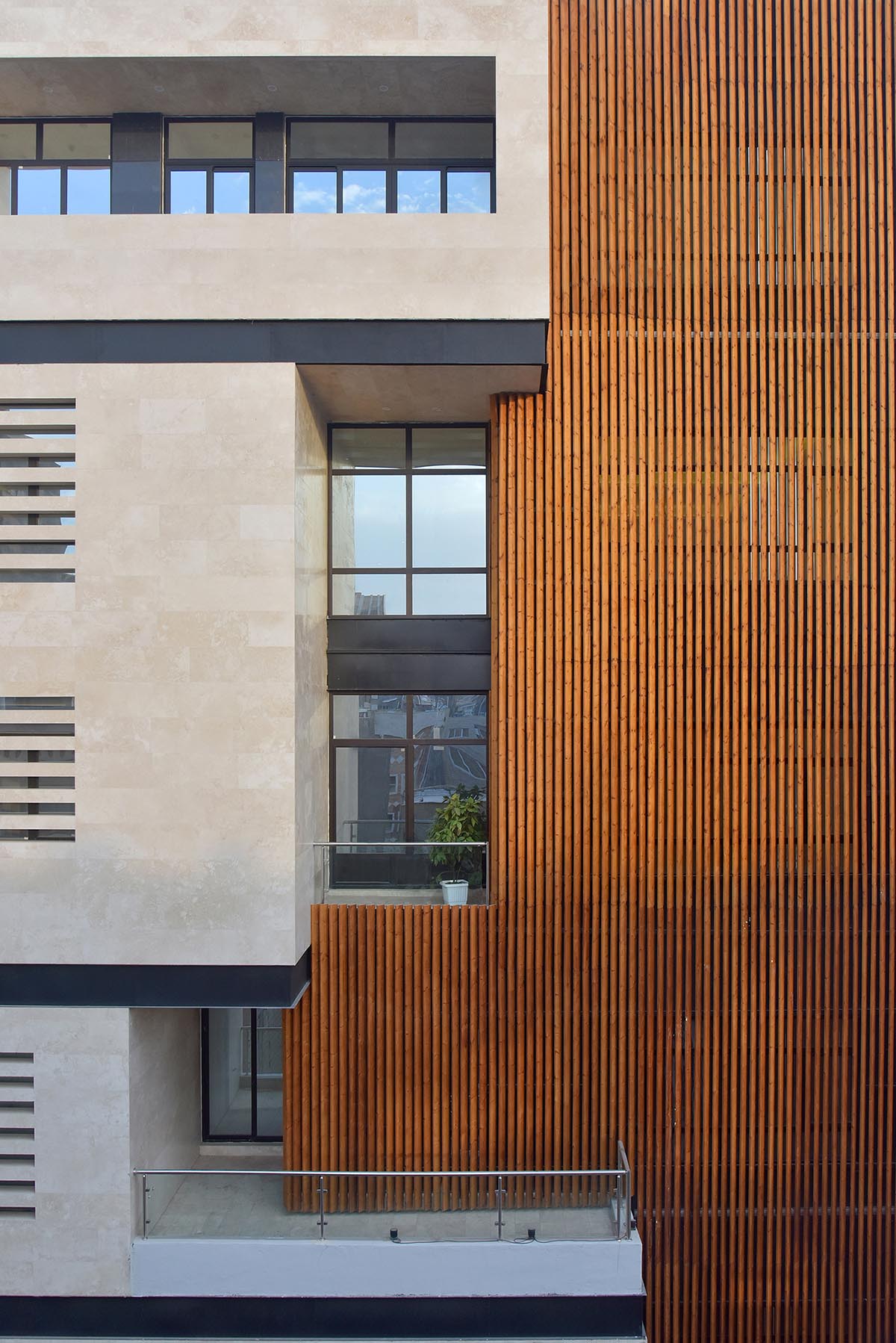 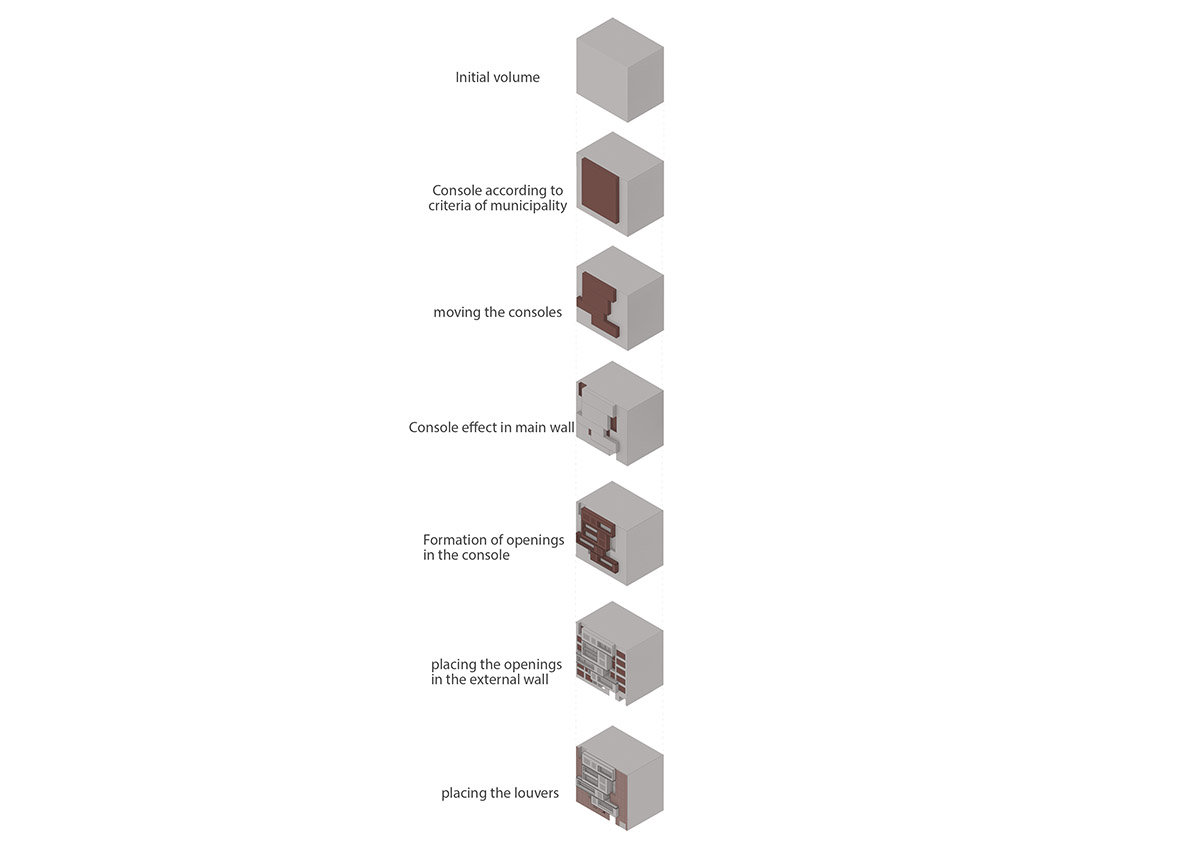 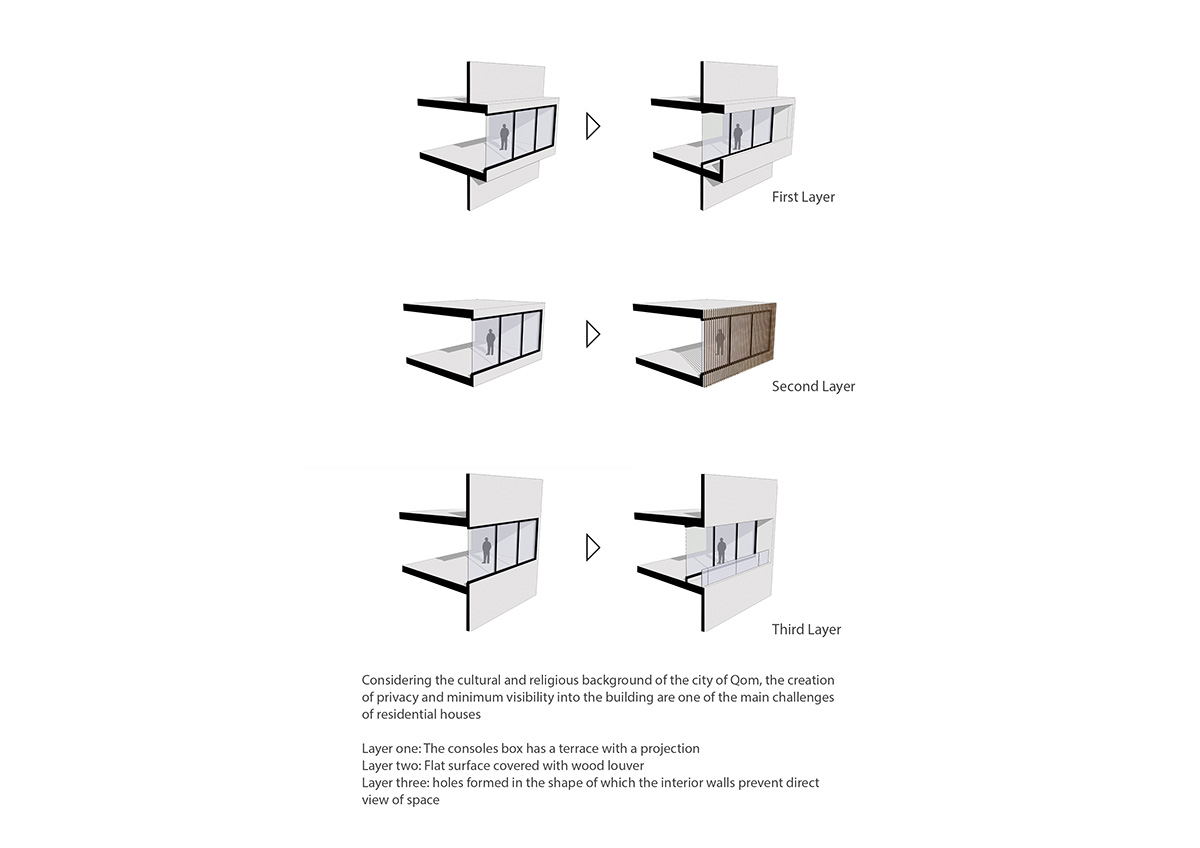 Solutions for Regulations of Municipality in Salariyeh Project

According to the short interview that WAC reporter, Dr. Javad Eiraji, had with Morteza Alinia Moghaddam, CEO and architect in Heram Architects, he says:

"In the beginning, to change the attitude toward the city's laws, the console that is usually made as plates before the facade is formed in these context, we have seen boxes that will form the terraces of each unit. Terraces that are individually and with completely privacy placed together, Consoles are thus converted into boxes that slide on the floor and create terraces by displacing. After forming its effect, the console places its effect on the main wall and creates holes at the point of contact with the surface of the facade. These holes form the other units of terraces on the same floor. In this way, we have salient terraces on each floor, which are formed individually in regard to privacy."

"With the formation of consoles in each floor of the main building, from a same facade, it became volumetric with a depth of three layers". 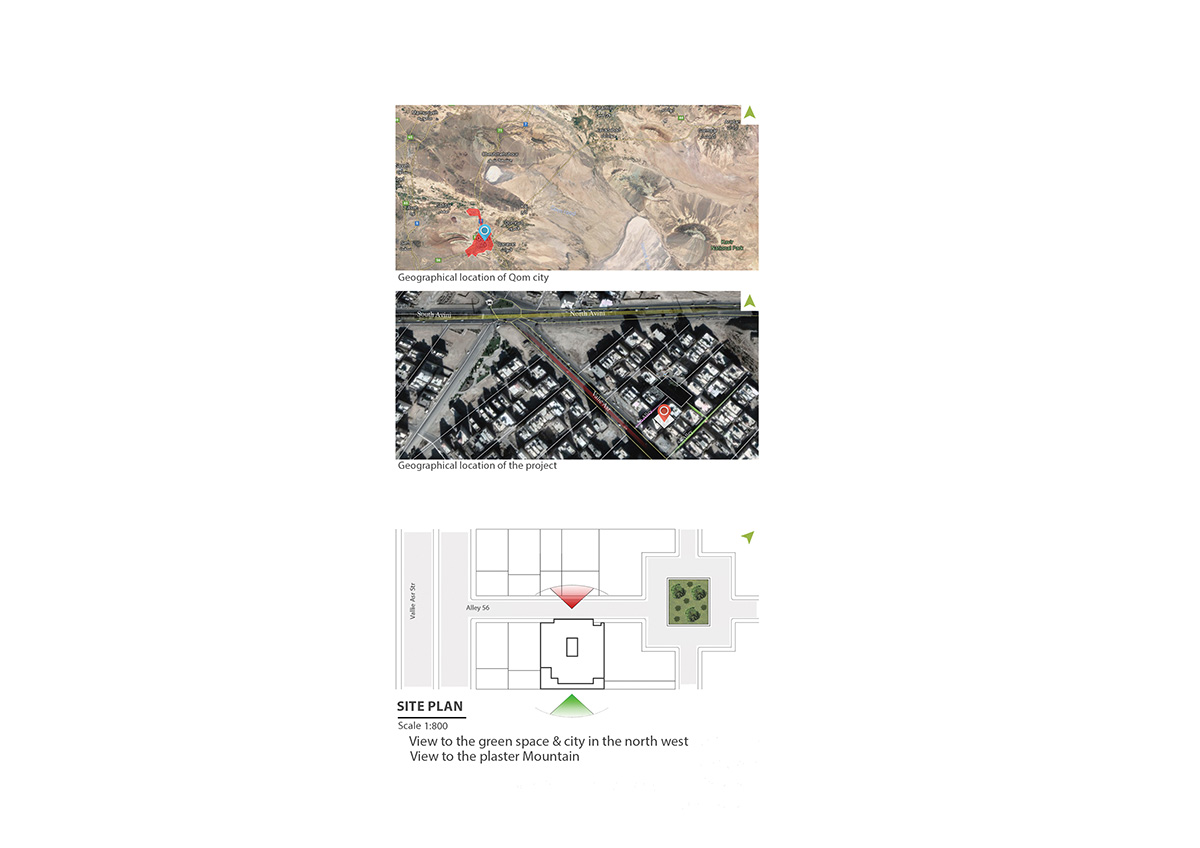 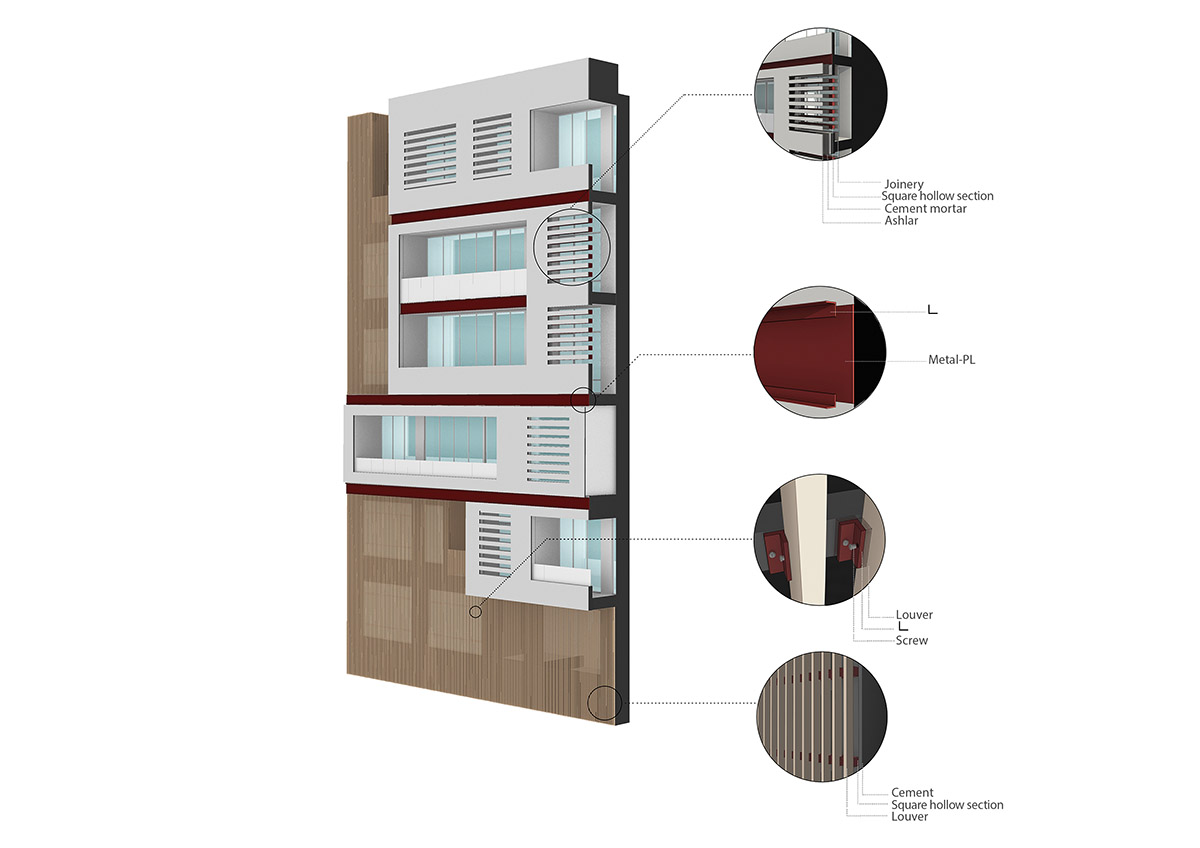 Solutions for Regulations of Municipality in Salariyeh Project

He continues: "The first layer of the level of console salient that forms the terraces, the second layer (the main wall of the building) is the flat facade, and the third layer is the holes formed by the impact of the console collisions on the main wall and the terrace is another on the same floor.

"By creating these three layers, the exterior and flat walls of the project have become a dynamic, deep-form formulation that is responsive to all internal functions of the building. (Lighting, privacy, terraces, plan and ...)."

"The effect of these three layers on interior plan has resulted in the location of the guest room, the living room, as well as the terraces in connection with the main wall, and the effect created different spatial qualities due to the needs of spaces."

"After the formation of the facade layers, due to the large number of openings and the creation of privacy and controlled visibility on the flat surface, the skin of the wooden layers was formed, in addition to preventing visual disturbances, causing continuity in the facade and defining the quality of the entrance of light and vision."

By forming the project, in addition to responding to internal functions, a different  approach to municipality standards and the integration of the project, the project is able to answer the issue of direct vision from exterior to the interior and privacy, Thus, in each of the three layers forming the outer wall, the facade problem is formed by a mediator, and no openings are opened directly in the exterior wall.

The design stages of the slow-moving project were formed as a research within a specific context. The formation of console systems and how to deal with them (which was a challenge to urban criteria), as well as the depth of the project, came up with other layers of issues and potential of the project. Layers that have been influenced by progress in the design process, social, cultural, structural, and even project implementation details. In this way, the design of the urban wall of the project was considered as a wall that incorporates internal functions, plans, privacy, and criteria, and in an interactive dialogue, it has its impact interior and exterior of the building.

Finally, the project represented itself as an integrated form in urban uniform context which has an independent identity relative to the surrounding context. 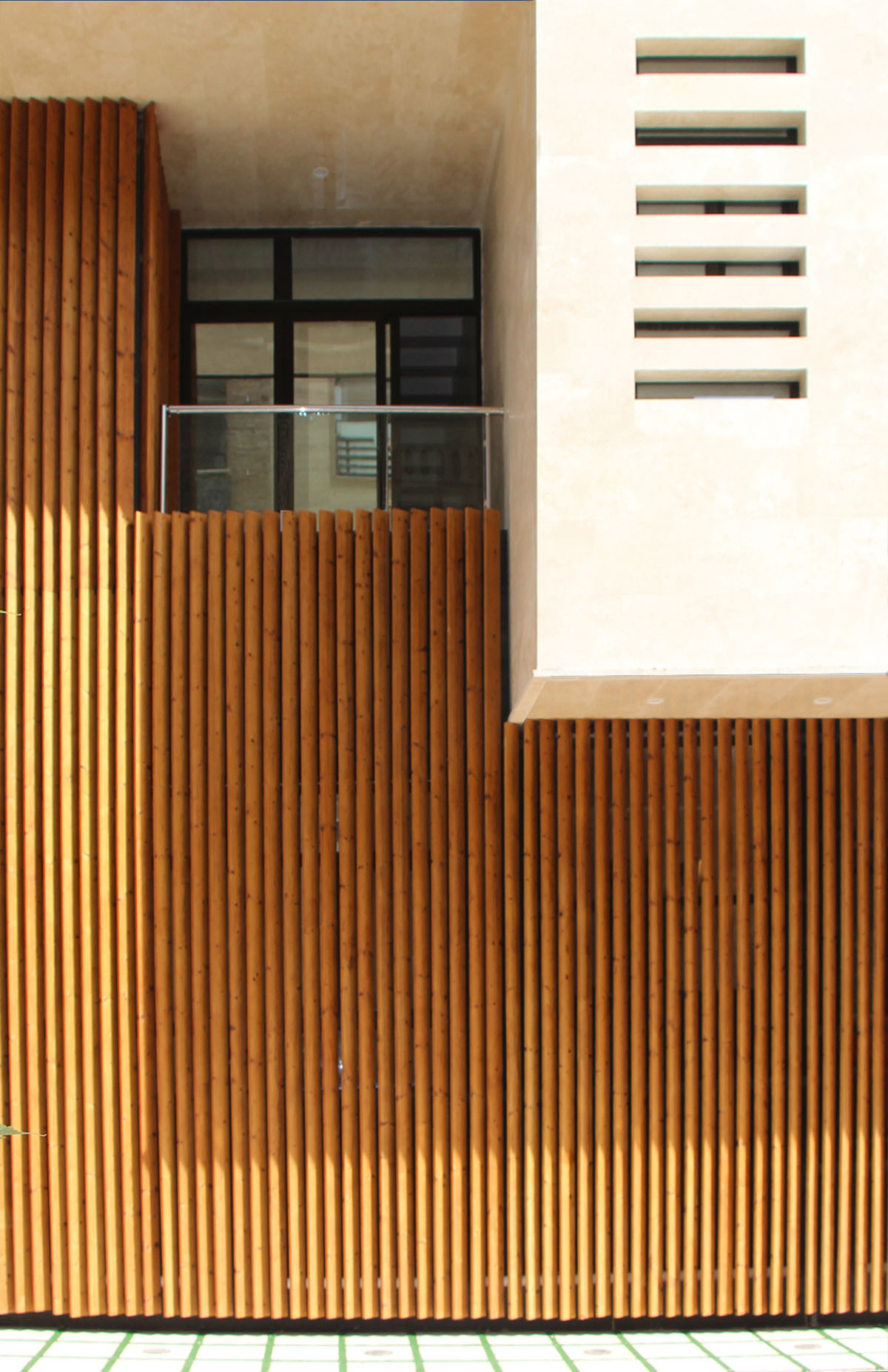 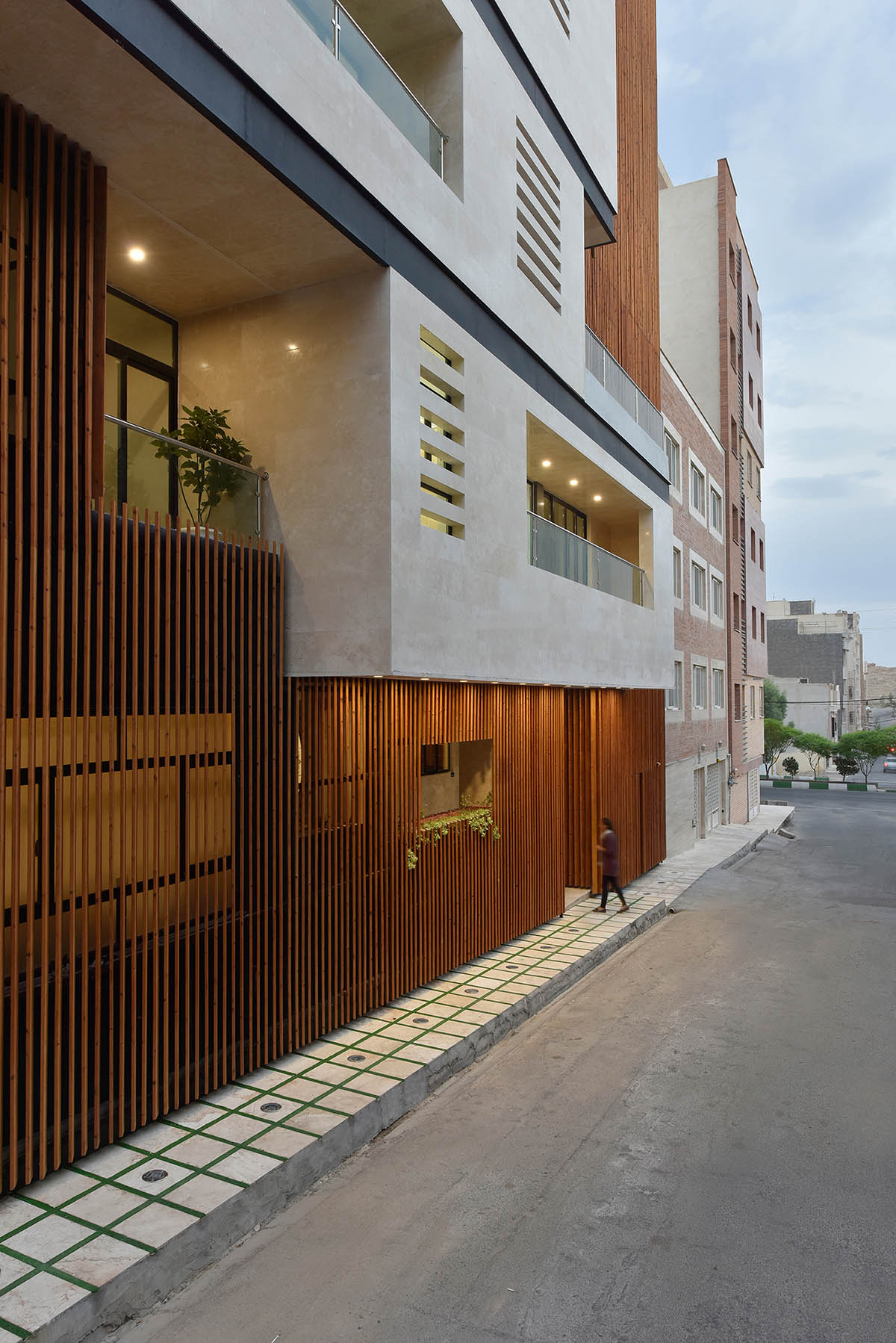 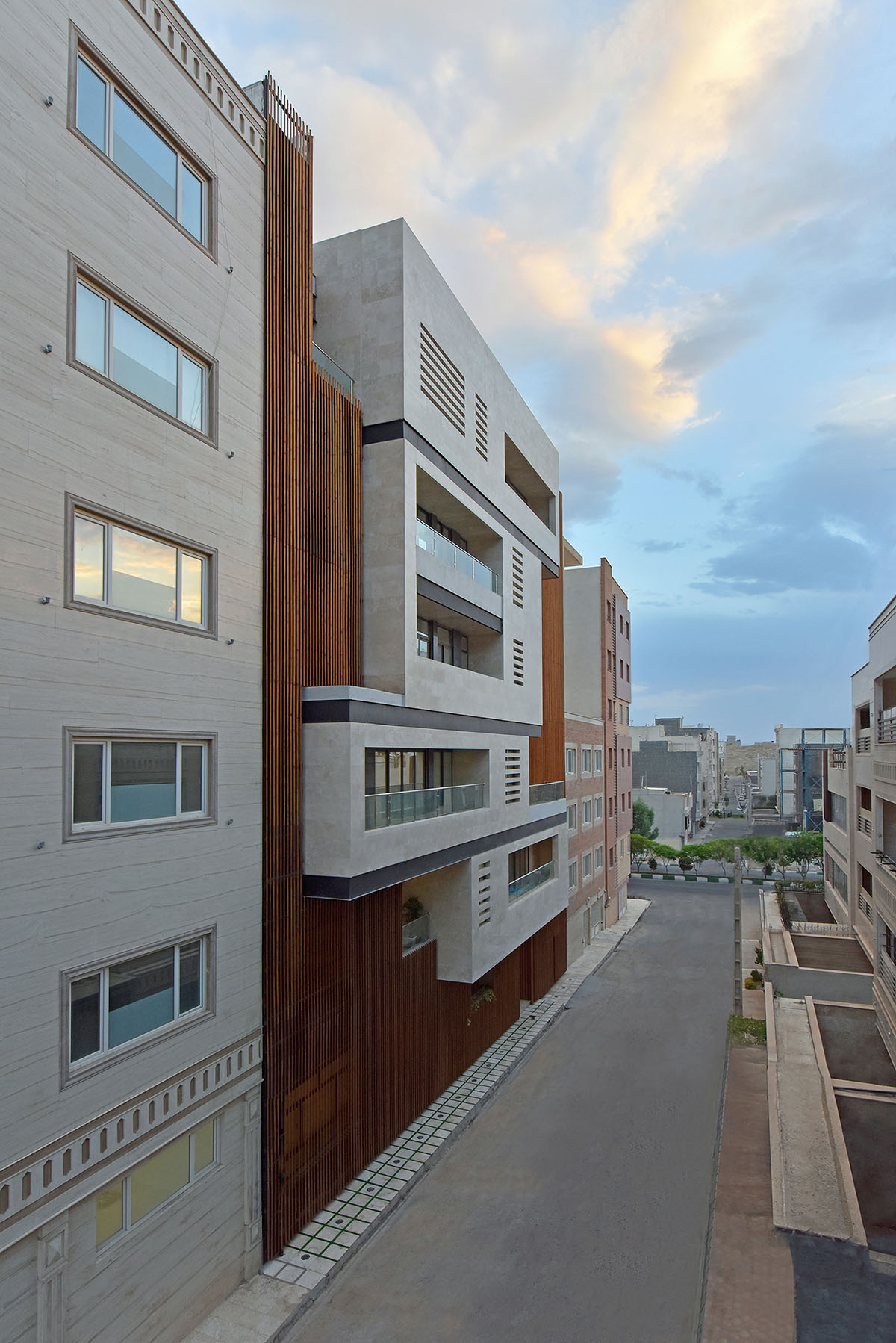 All the information that we could get from our case study, Salariyeh Residential Building, show that even though the limitations, rules and laws of municipality of city can cause repetitious forms and facades in buildings, but sometimes planning to have creative reactions and using updated and suitable materials and compositions can create new ideas and concepts in design and this is the solution that many young architects are trying to do and shake the rules in these days in contemporary architecture of Iran.