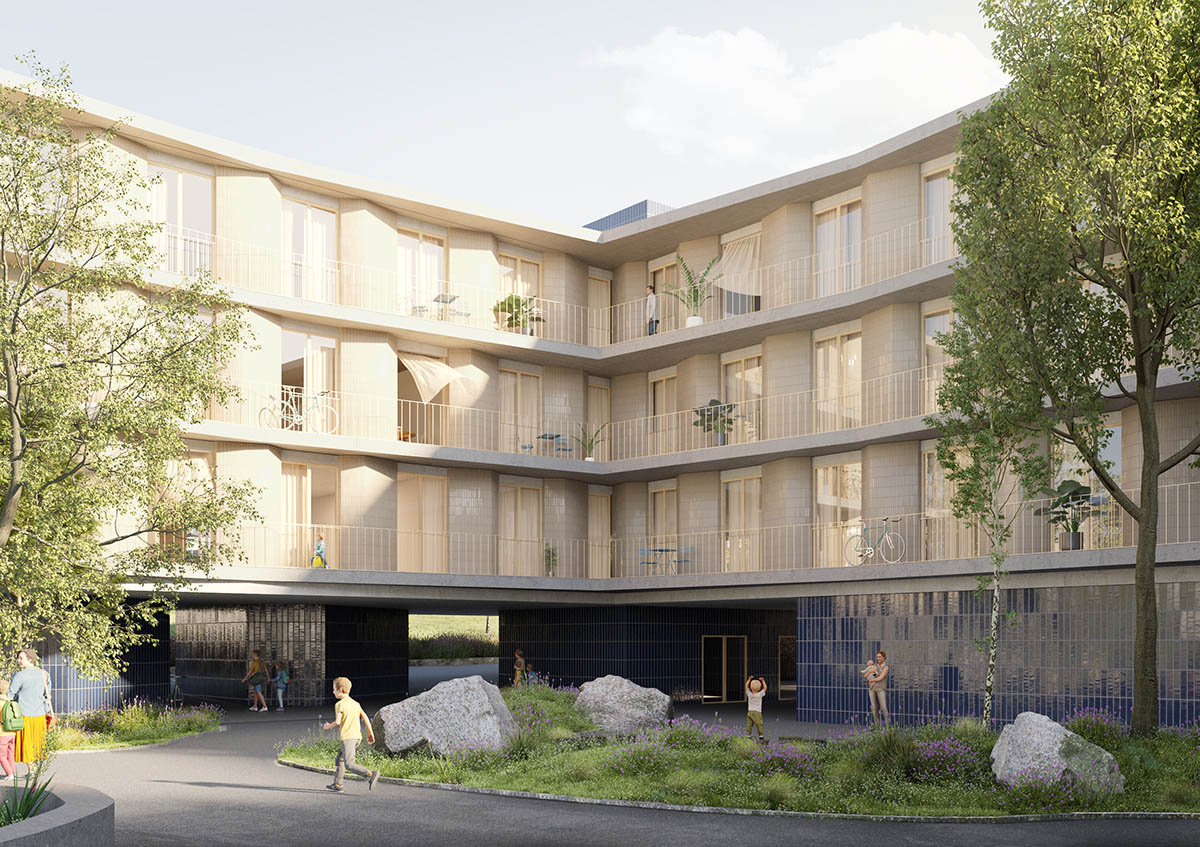 The Porto architecture office MASS Lab has won the first and second prize and also an honourable mention in a competition to design affordable housing in Almada, Portugal. 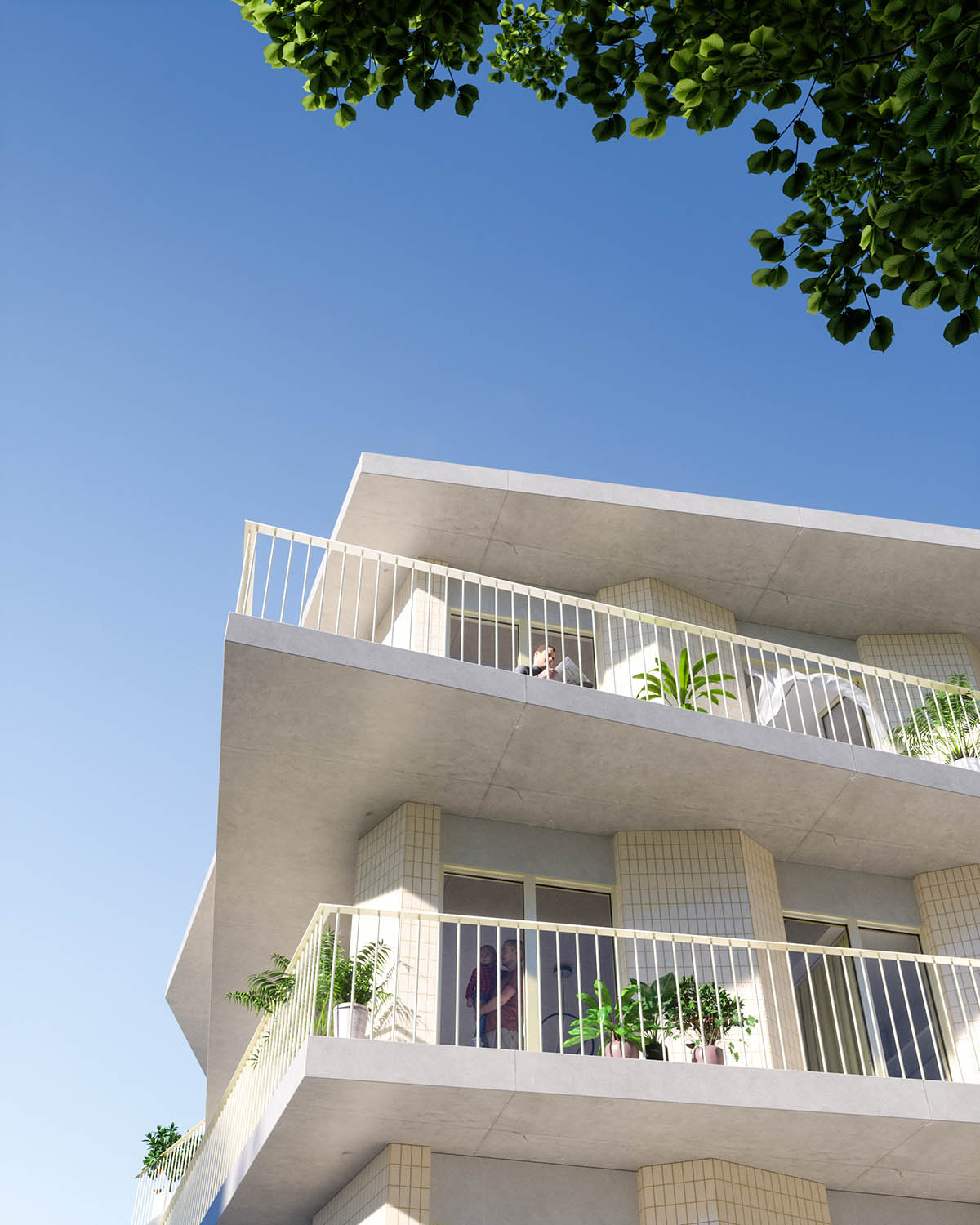 With a gesture capable of contaminating the context, the proposal is not only reduced to the filling of the drawer with a volume, the proposal translated itself into an integrating approach to the urban fabric and the nearby surroundings.

The jury highlighted "the investment and the audacity" of the intervention, since not only was the architectural object designed, but also "a seductive design proposal for the adjacent park and square" was presented. The jury distinguished the proposal from the others given the "remarkable cohesion demonstrated in its response to the competition program and which resulted in a building of very high architectural quality". 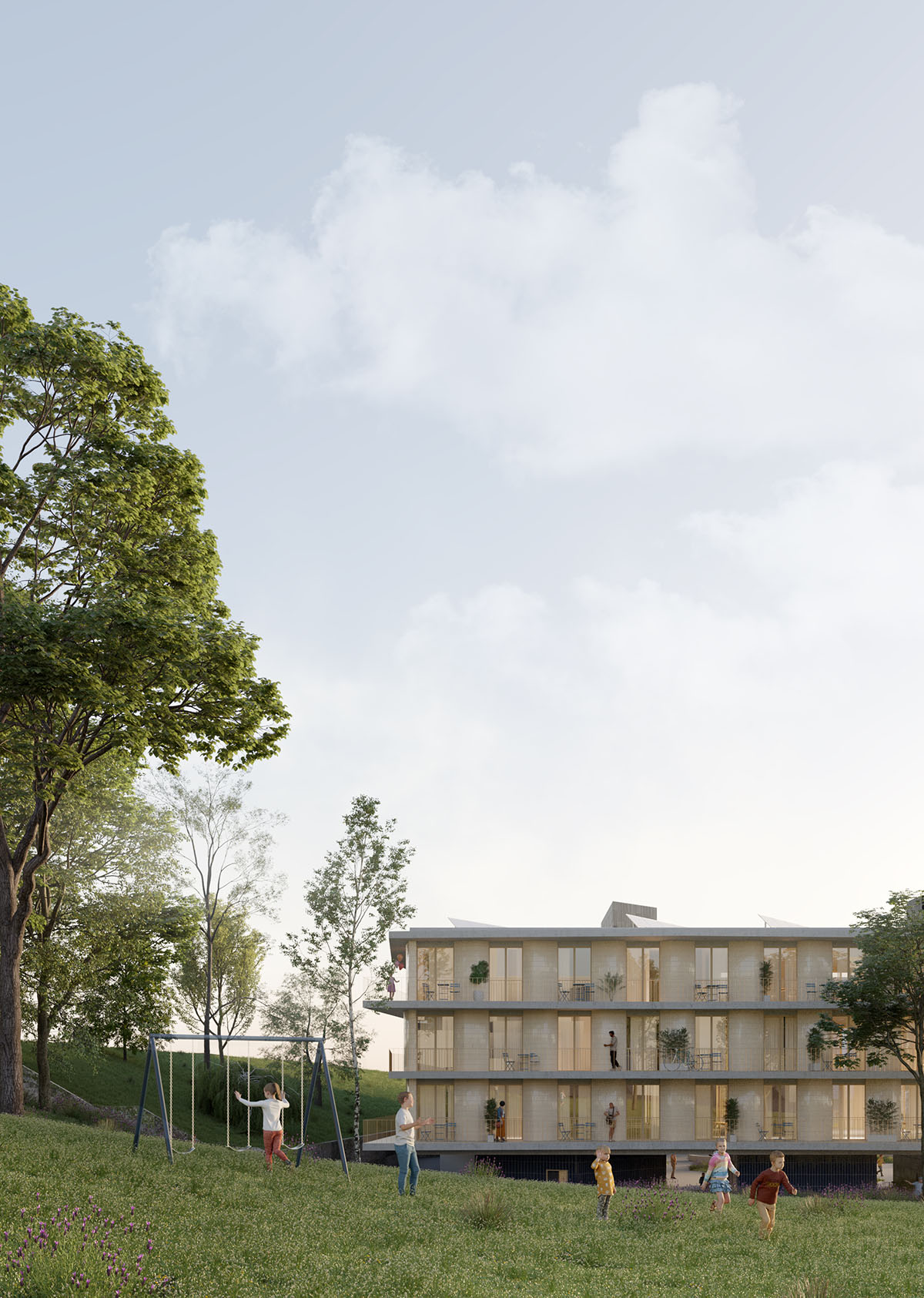 Located in a corner, between buildings, a park and a square, the main goal of the project was to clear the first floor so that there would be no barriers from an urban point of view, making the volumes under the building become part of the everyday life of all who pass by.

As the building is at the convergence of two slopes, it is important that it is formally available to react and make its surroundings react, moving in all its layers, joining all the pieces of the first floor, and breaking on the upper floors. 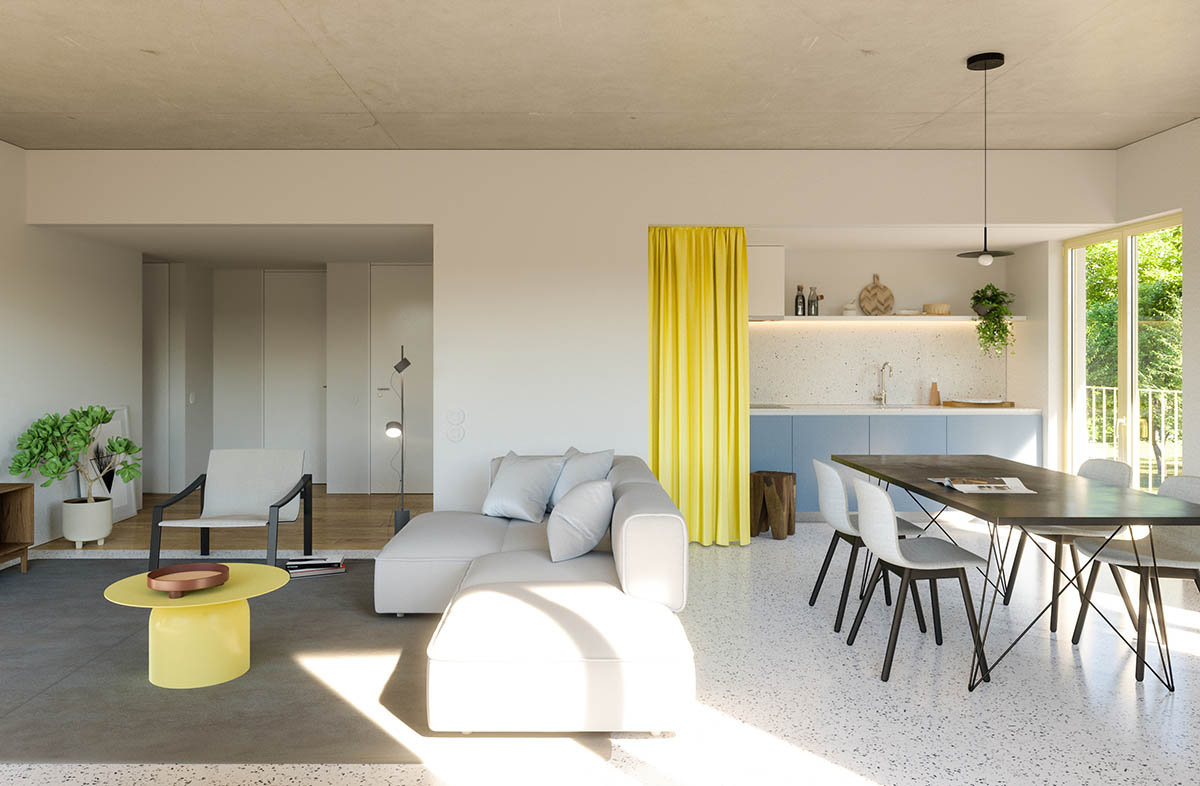 The building twists and turns, lining the hill, and mimics the movement of its curves, denying a static condition. If inside the house we have our personal refuge, it is in the square that we seek to dynamize not only the experience of the building's residents but to promote a redesign of the surroundings by connecting the square to a new green park, through an unblocked first floor under the building, which opens to direct the flow of users.

Using prefabricated concrete panels covered with tiles, the façade module is successively mirrored, reflecting light differently along its outline, vibrating. The balconies, also pre-fab pieces, move in and out of the façade, changing in each of the apartments. 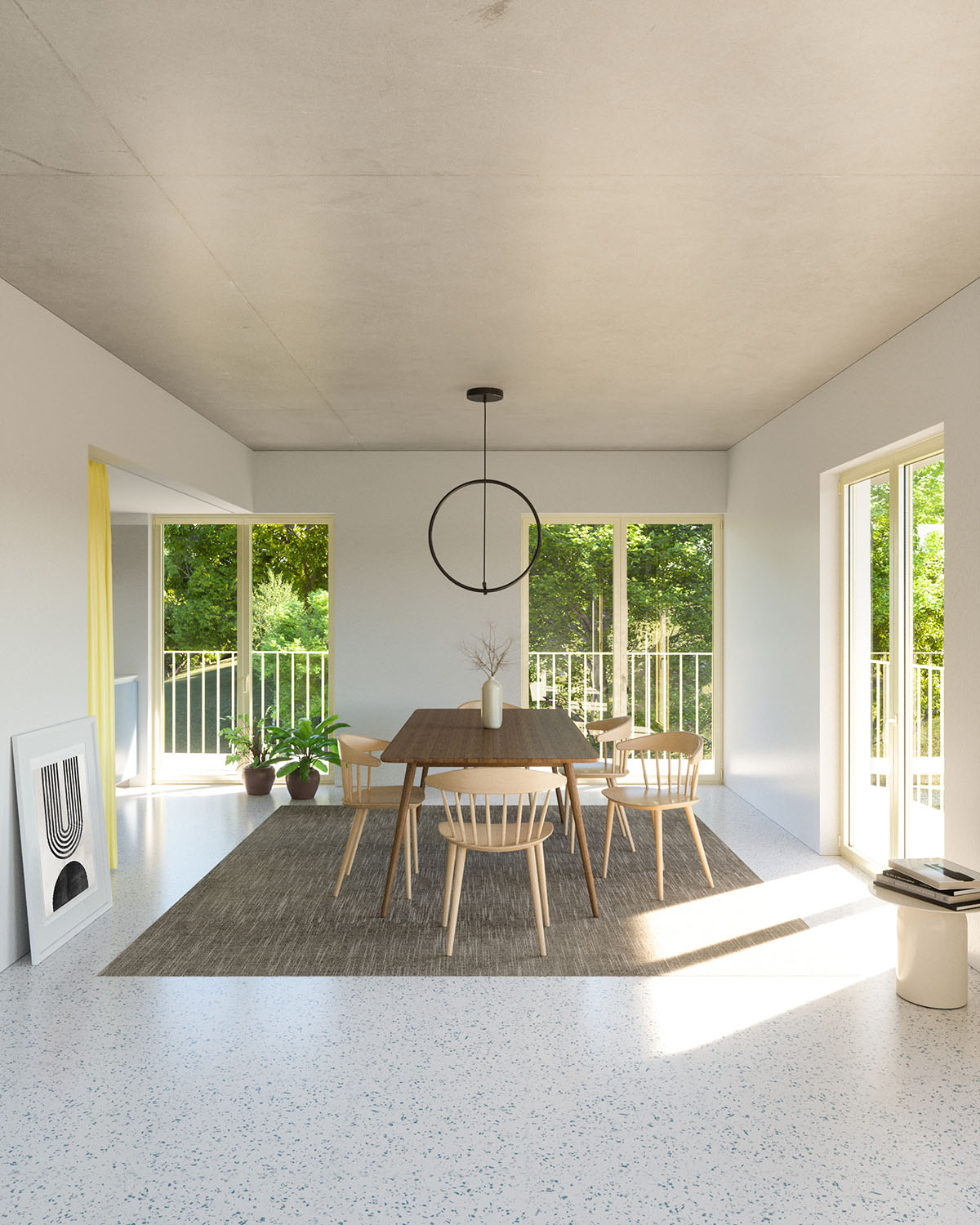 The way the two materials, concrete and tile, reflect, and the changing colour of the podium, give the building the ability to sweeten itself and merge into the residents' activities. Not settling into monotony, the building demanded movement. The apartments contradict this desire for movement, and there is a rigidity of design, regulated by the relationship of emptiness, which leaves room for occupation, and where the rooms are not only delimited in the private but also mediate the collective experience. The proposal stood out "for its bold approach" to the problem, where the jury valued the "degree of innovation in the development of the project, risking unconventional solutions" for the housing model. 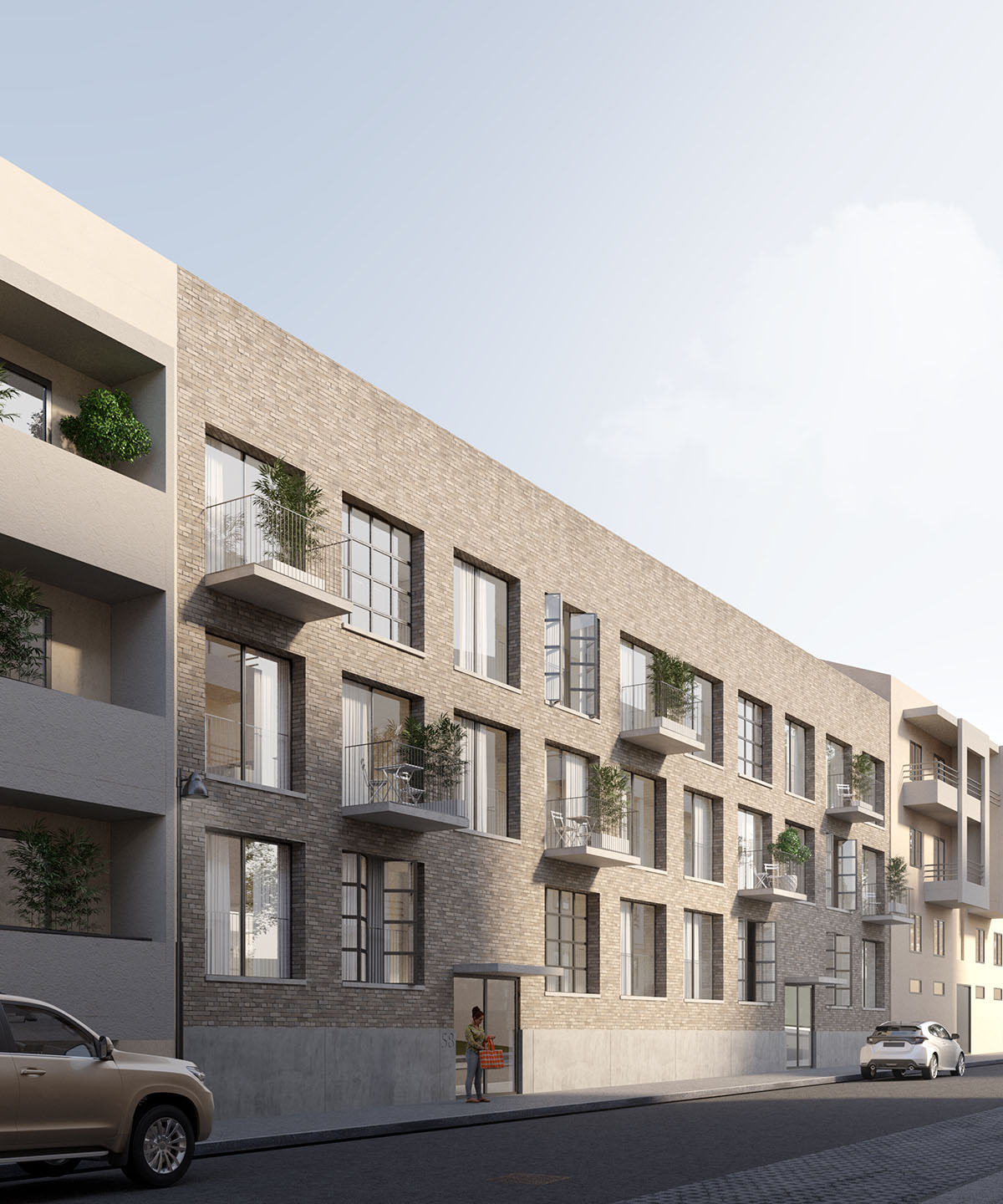 The intervention area is located in Quinta da Caneira, in Sobreda, inserted between two pre-existing buildings, in a mostly residential area, establishing a relationship at low elevation, to the south, with Rua Romeu Correia and at high elevation, to the north, with Rua Almerinda Correia. The immediate surroundings enjoy a cohesive network of infrastructures, including road and rail access, public transport such as buses, shopping and leisure areas. 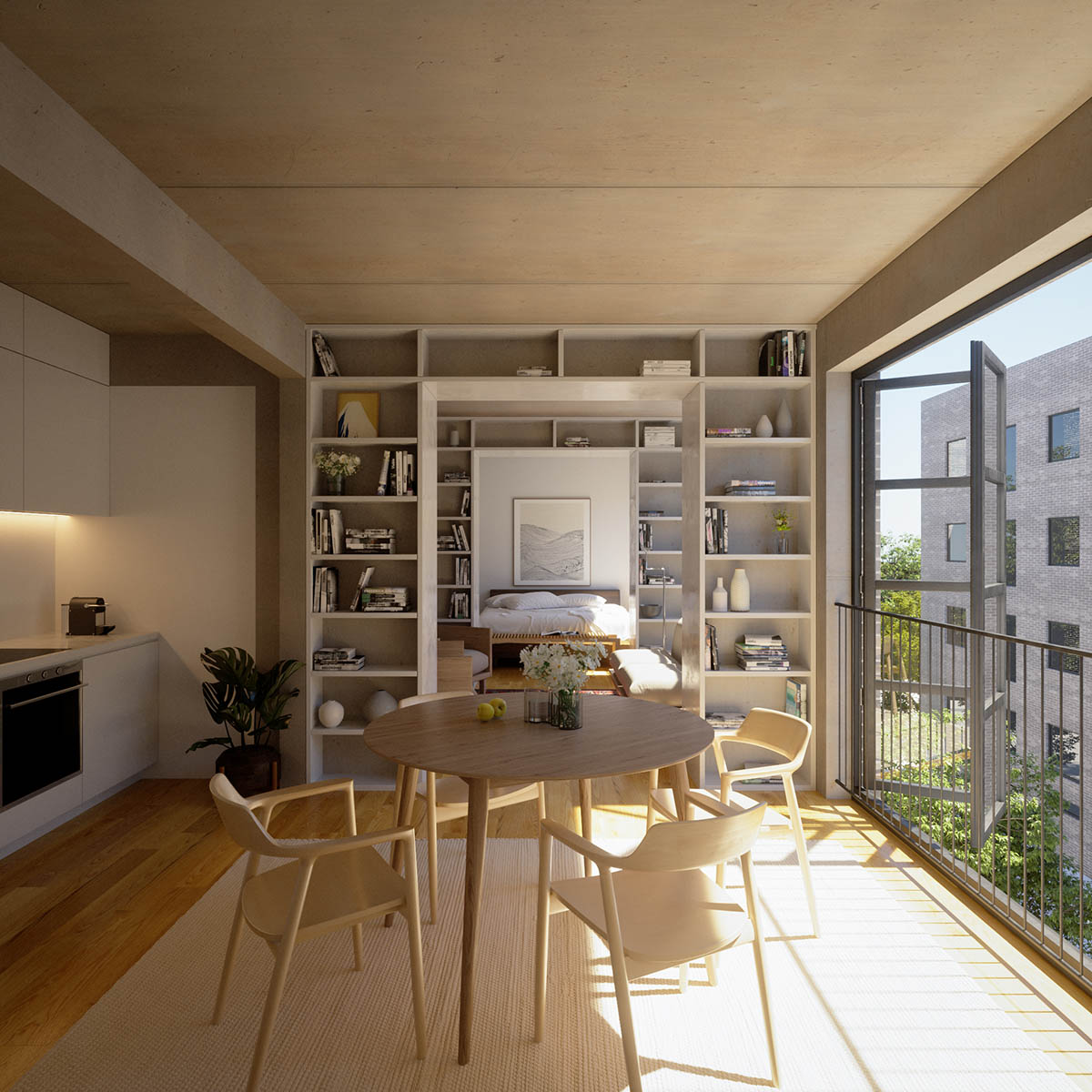 In Almada's urban morphology it is evident that the growth in the peripheries is directly related to population migration and the consequent construction of housing and commercial complexes. In order to mitigate/dilute the discrepancy between the peripheries and the city center, the proposal should ensure the creation of alternative programs and spaces that encompass local communities, without segregating them from each other. The affordable rental program allows for the support of low-income social groups, improving the city's housing standards. Thus, the redesign requested in this competition should not be reduced to simply adding a built volume in the designated area, but should contribute as a gesture that will contaminate the whole context, who occupies it in the present and who will integrate it in the future. 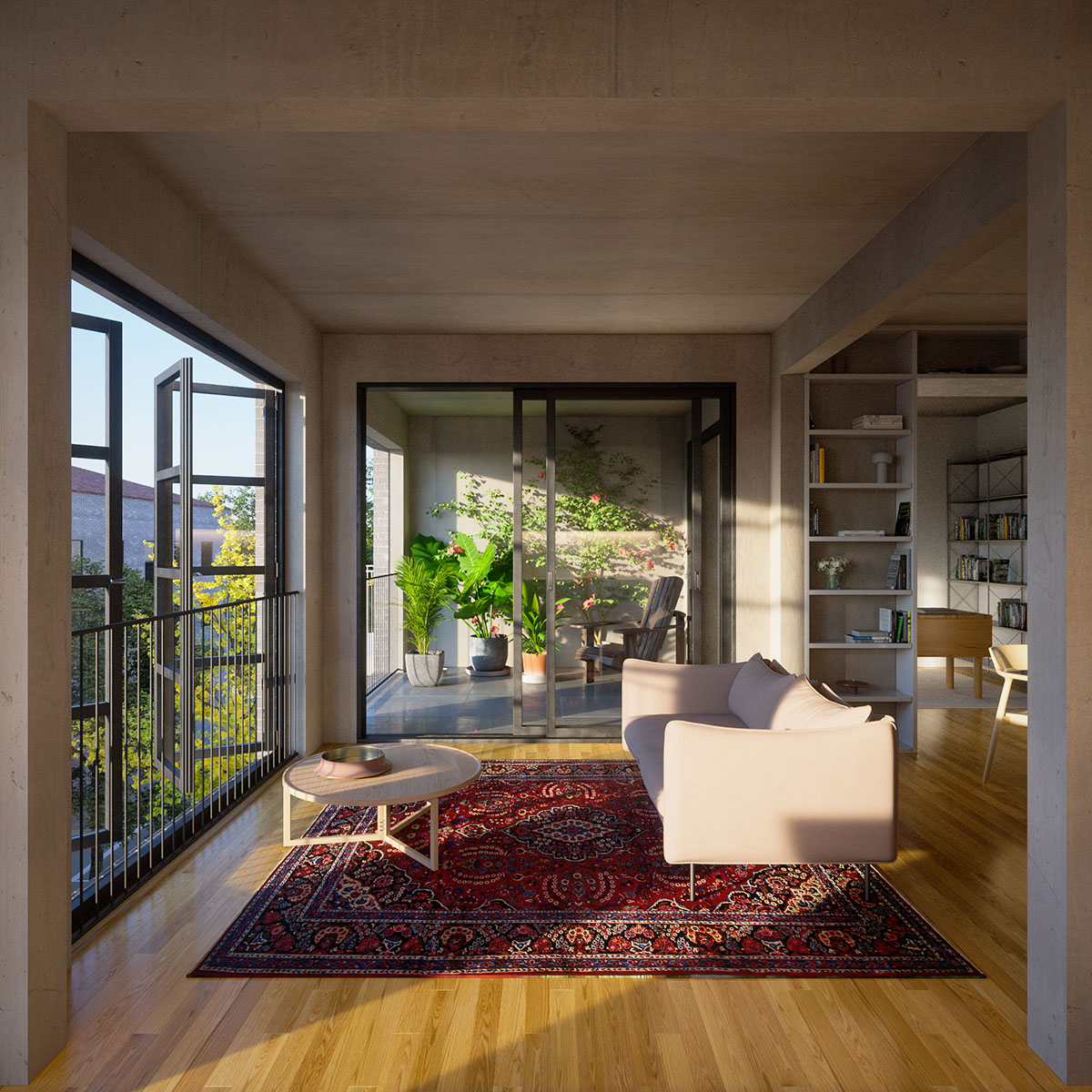 The logic of the building develops through the use of a single minimal volumetric unit (3,20x3,20m) that replicates, and unfolds in a way that conforms space and multiplies uses. The space between the two existing buildings is then occupied by a prefabricated structure that rationalizes this void. A rhythm of ten units is articulated to the surroundings. 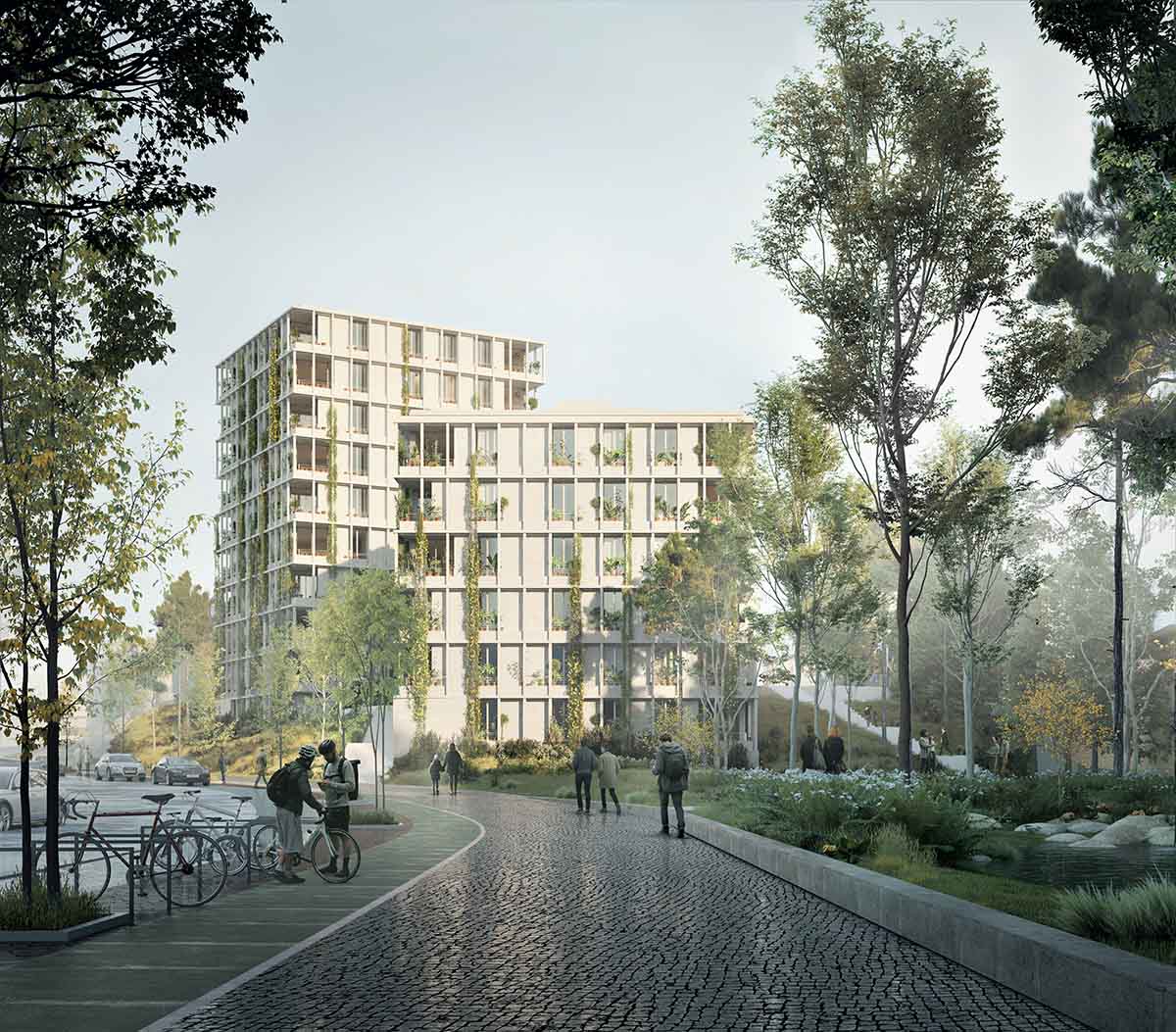 The proposal awarded with the honourable mention is based on an urban design that promotes a quality urban image.

The jury emphasizes that despite not respecting the previously approved allotment permit, the two proposed towers "solve well the implantation of the buildings in a terrain with such a difficult topography". 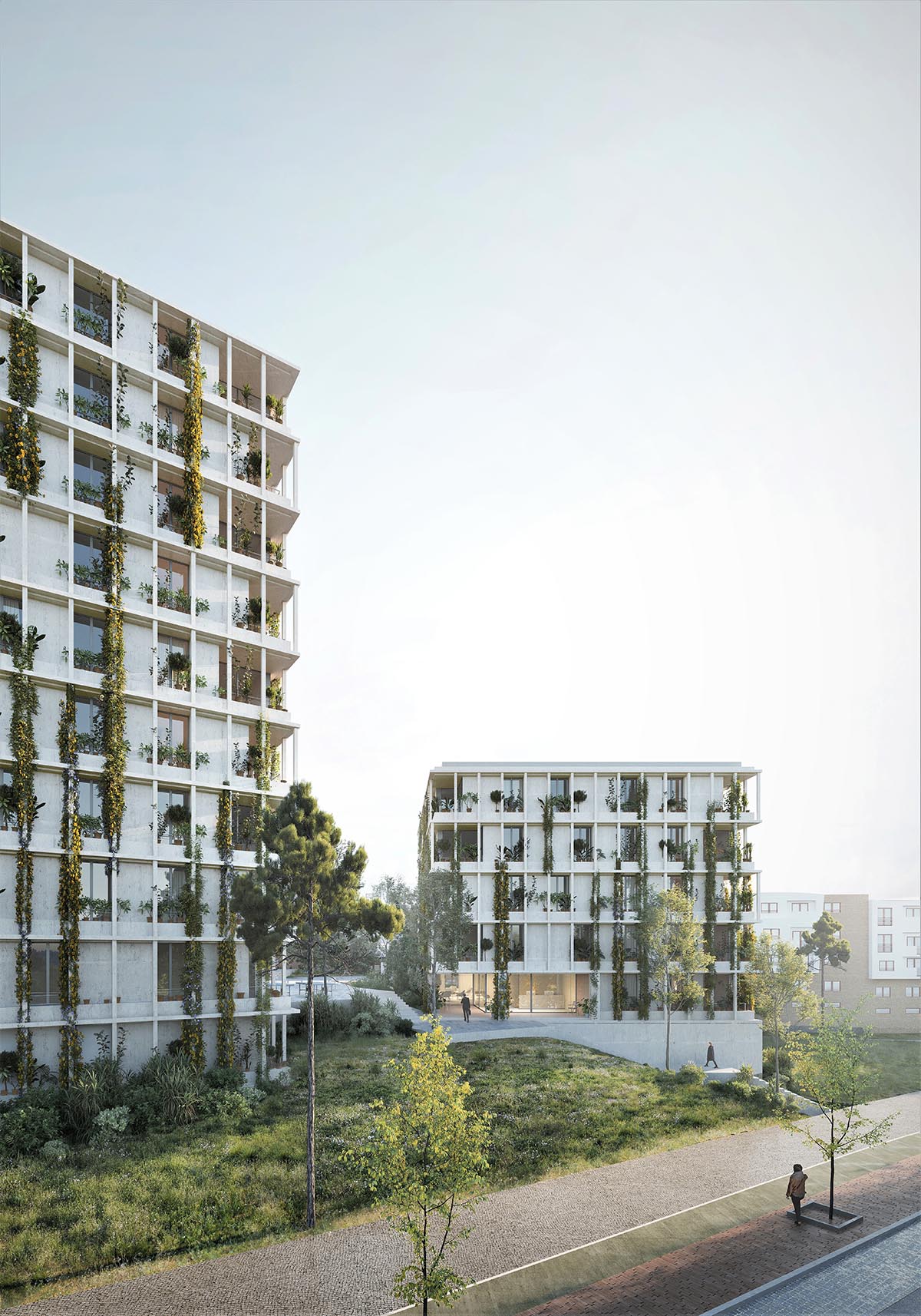 MASS Lab is an internationally awarded design studio, engaged in the fields of architecture, landscape, urban design, and comprehensive planning.