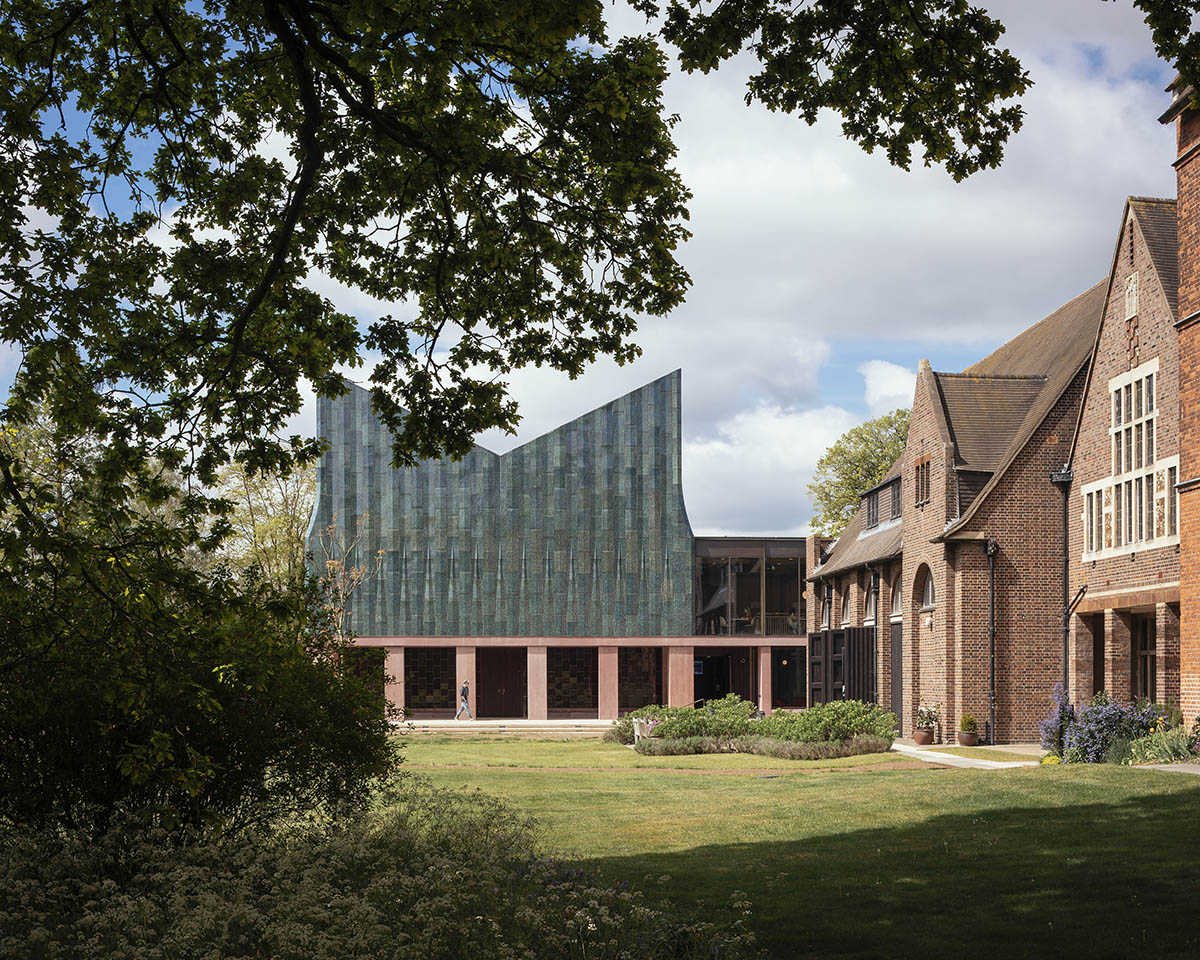 London-based architecture practice Feilden Fowles has designed a dining hall wrapped in green faience tiles at the University of Cambridge's Homerton College, presenting a crown-like appearance with its striking appearance.

Situated on a 3,000-square-metre site, the new building comprises a dining hall, buttery, kitchens and associated staff amenities. The building takes cues from its adjacent buildings such as the Arts and Crafts style Ibberson Building, built in 1914 and Victorian Gothic Revival buildings. 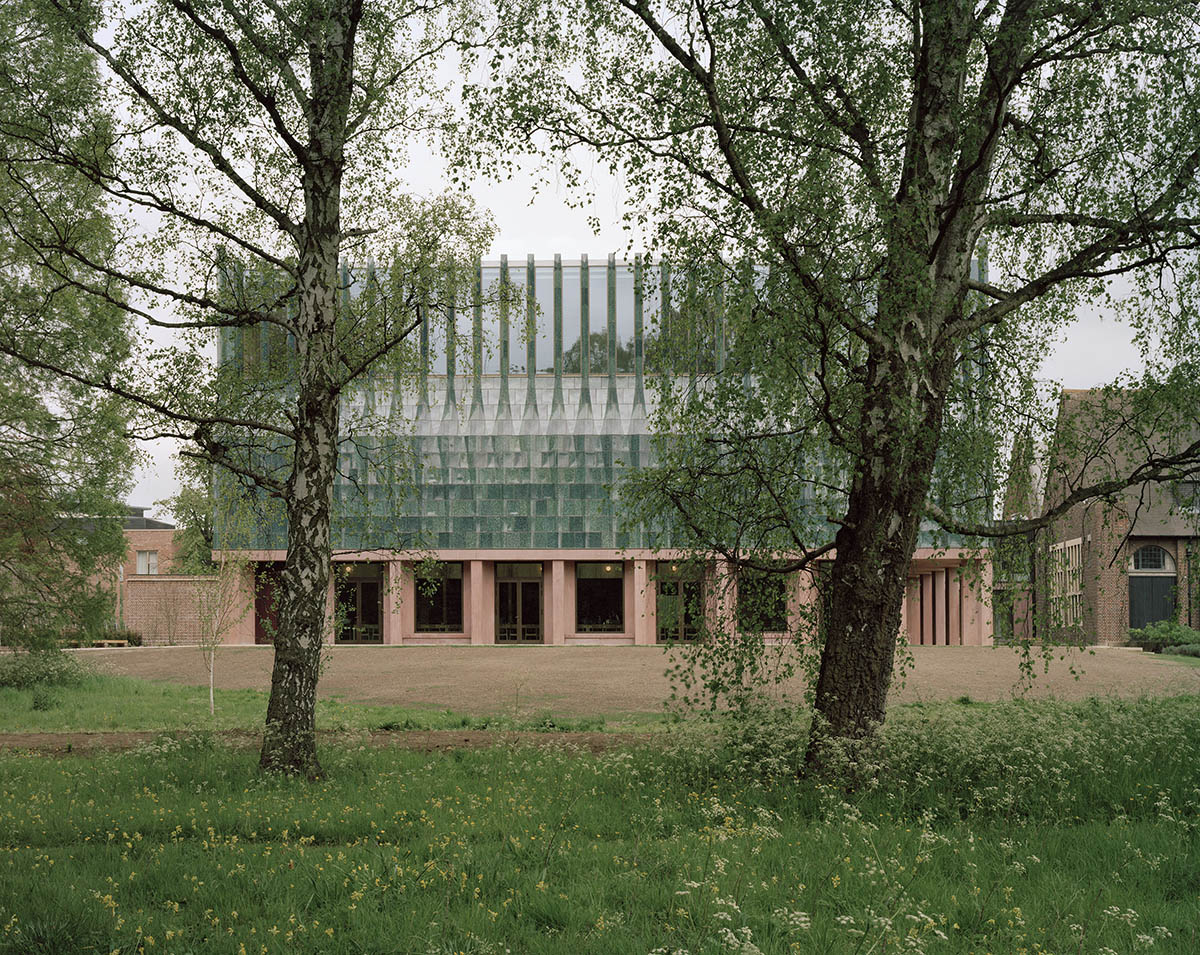 "Homerton College sits to the south of the city of Cambridge. Its core buildings were constructed in the 1870s for Cavendish College, with Homerton College moving to the site in 1894 from its original home on Homerton High Street in East London," said Feilden Fowles.

"Founded in 1768 by a group of dissenting academics, it has retained its free-thinking roots."

"Formerly a teacher training college, Homerton became a full College of the University of Cambridge in 2010, and now, as Cambridge’s largest College by student number, offers all the subjects taught by the University," the studio added. 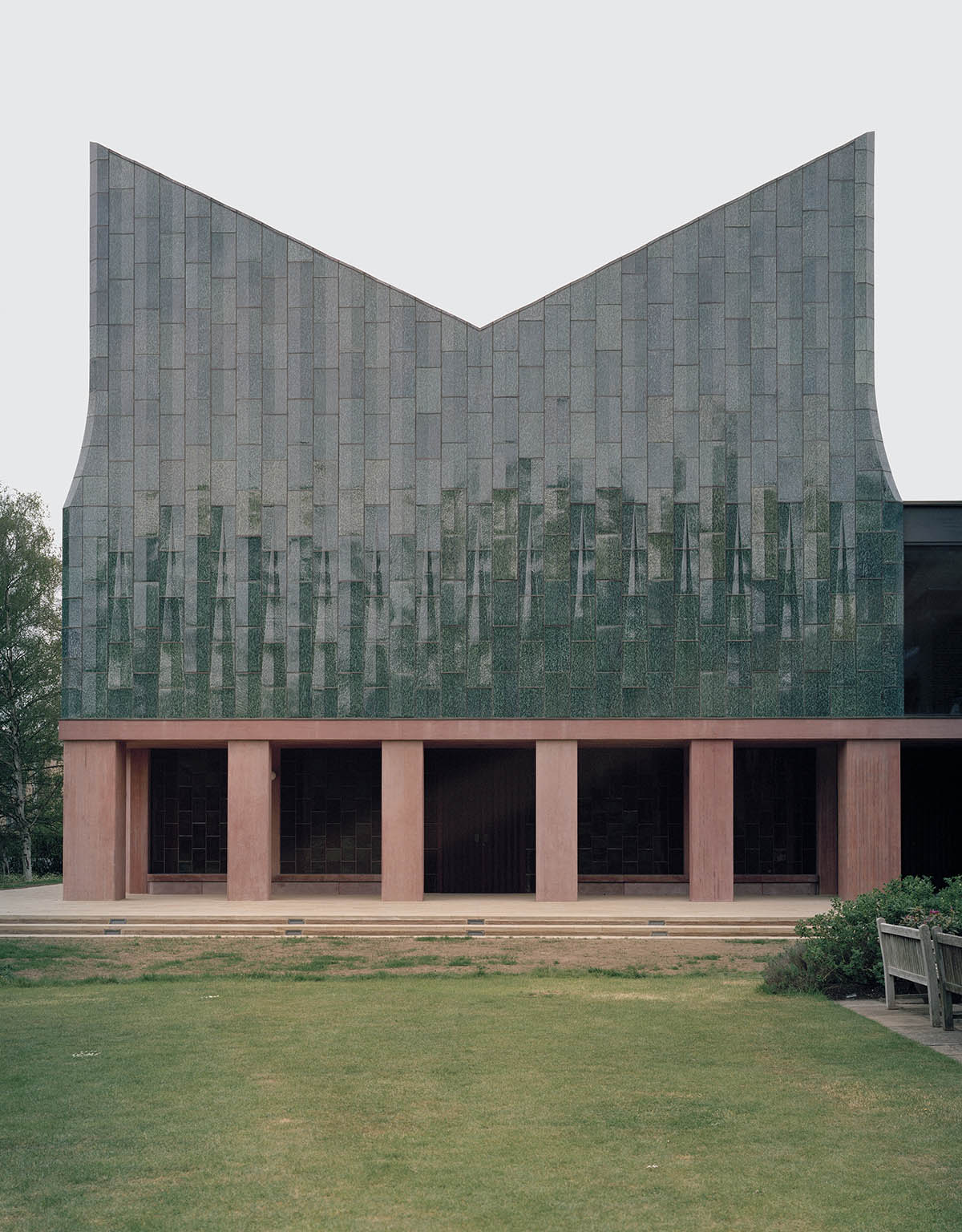 The College has expanded to inhabit a greater proportion of its significant 10- hectare mature grounds, which encompass a large lawn and gardens, an orchard and sports pitches.

Feilden Fowles-designed new hall is located to the northwest of the estate, as explained in a project description by the studio, the new hall is becoming an important social cornerstone to the College campus, and completing the historic northern range of buildings.

The studio conceived the dining hall as an open and generous building in the round. Due to its sharp material approach, the building stands as alone sculptural building where people can flow underneath.

According to the studio, the building addresses the challenge of relating to its four very different aspects: "embracing the College grounds to the south and east, meeting the Grade II-listed Ibberson Building, addressing the street, and improving connections to graduate student residences and parking facilities to the west."

"By doing so, the building creates a range of informal social spaces around its perimeter – from the courtyards and cloisters, to generous thresholds with seating hewn into the façade – inviting chance encounters and moments of interaction for staff and students alike," added the office.

Due to the growing numbers of the College, Homerton required a new catering and dining facilities to be able to also balance the functional and the celebratory demands of the brief. 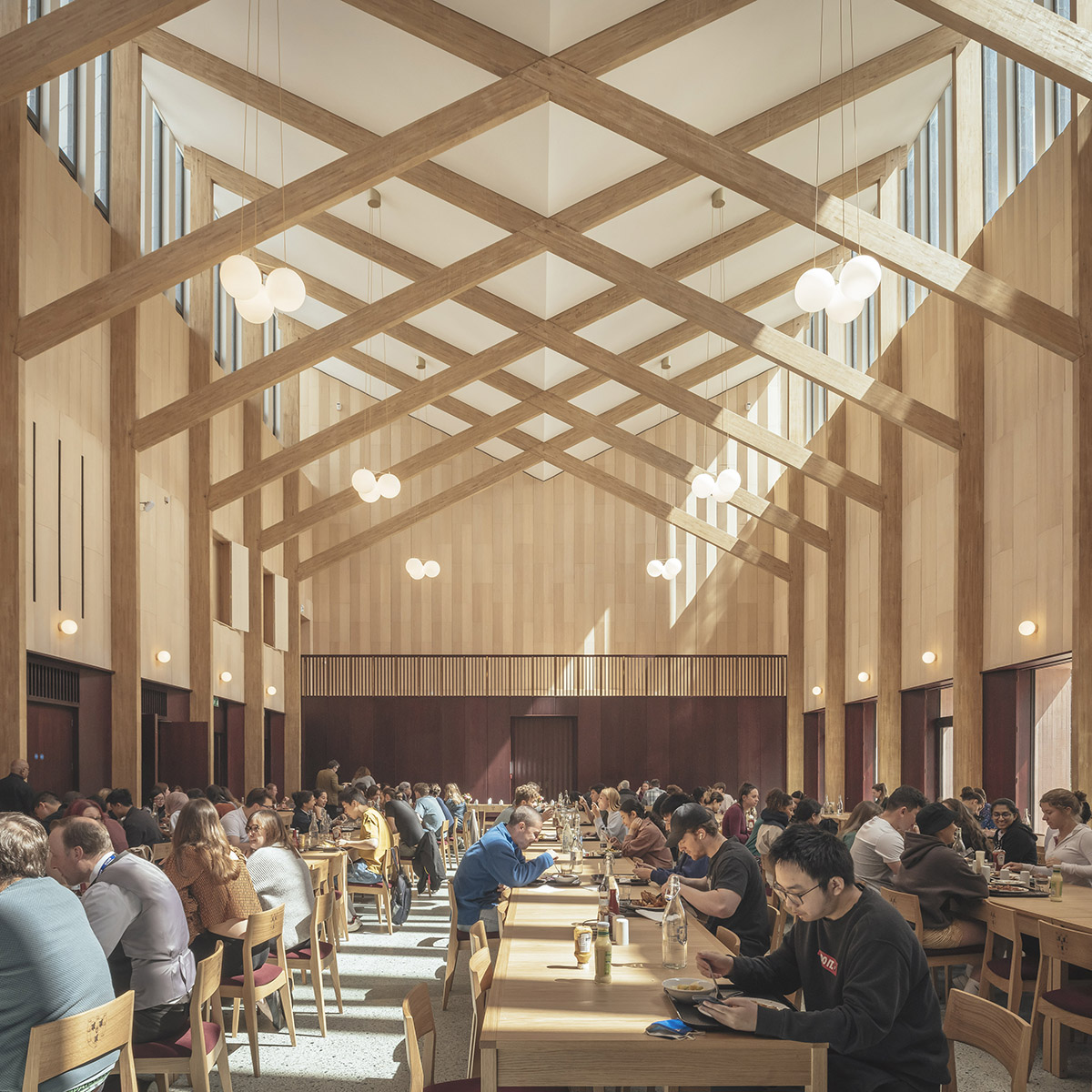 The studio envisioned a new building that can act both as a dining hall that is bright, airy and efficient in the daytime, transforming into a dramatic evening setting reflecting the traditional ceremonial role of the hall.

"While many historic dining halls are solid at ground level and often dark as a result, the new dining hall has an open and inviting base embracing its southern aspect, with views out towards mature trees and an area of ancient meadow," said the studio. 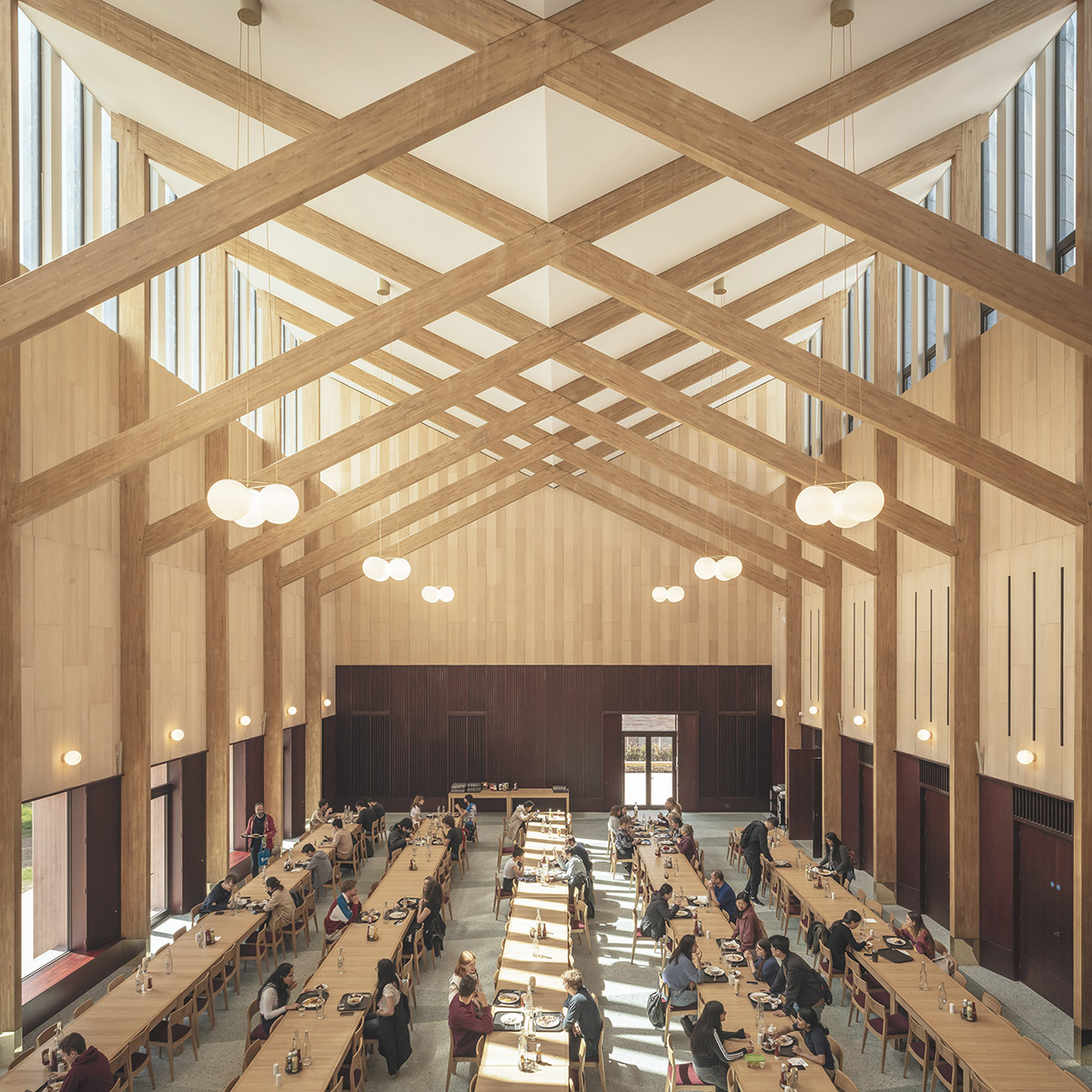 "Creating the dining hall at Homerton College has been an extraordinary journey for the many involved. The design of the hall is symbolic of Homerton’s progressive character and bold ambitions, yet simultaneously in conversation with the rich architectural heritage of Cambridge," said Edmund Fowles, Director, Feilden Fowles.

"There are echoes of the marching buttresses of King’s College Chapel, references to the Victorian Gothic Revival of Homerton’s Cavendish College buildings, and motifs of the neighbouring Arts and Crafts Ibberson Building."

"They combine as a marker of today’s architectural thinking, an embodiment of low-tech principles, an Arts and Crafts of the 21st century."

"We hope this generous new hall will welcome and nourish Homerton’s community, hosting vibrant conversations over a meal for decades to come," added Fowles. 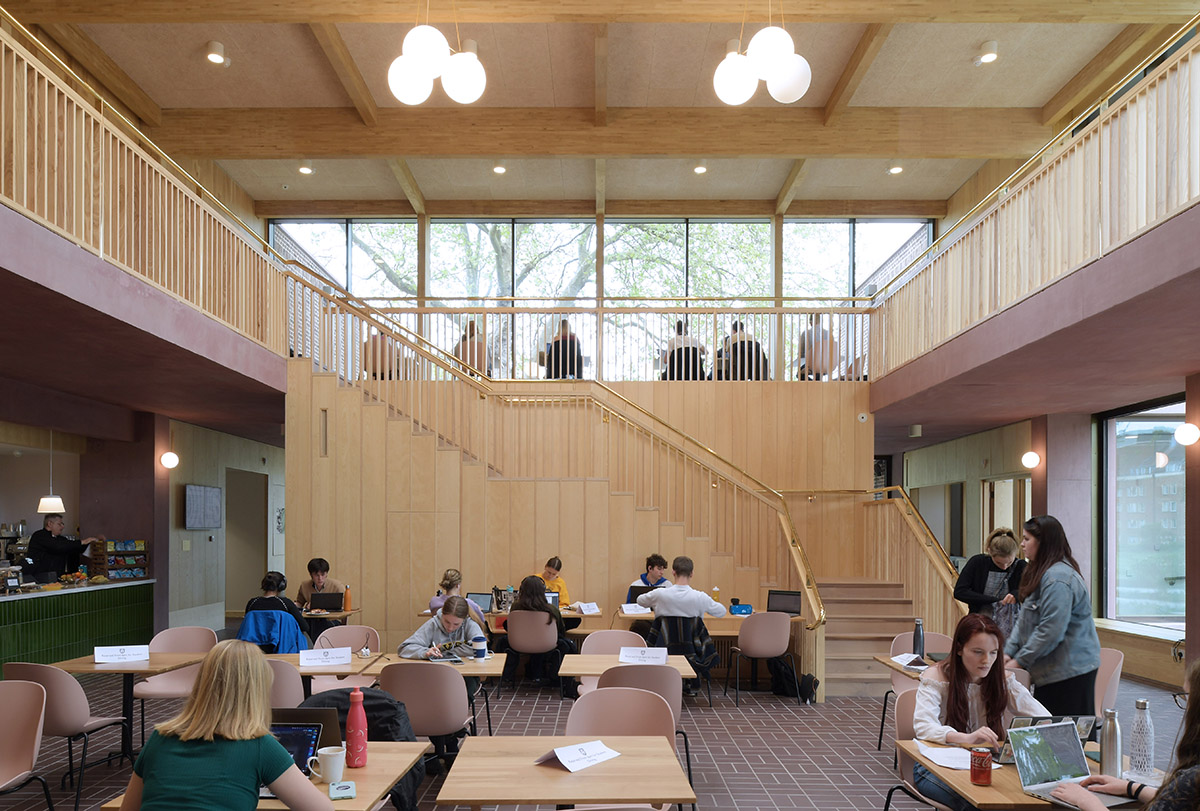 Accommodating up to 336 people, the hall provides daily dining for students, staff and visitors. It also hosts formal and commemorative dinners throughout the year.

The new buttery seats up to 60, functioning as a more informal café throughout the day, and affording students an alternative setting for socialising and quiet study space on the balcony.

To create this sculptural building, the studio draws inspirations from the Arts and Crafts tradition by combining low-tech forms of design. 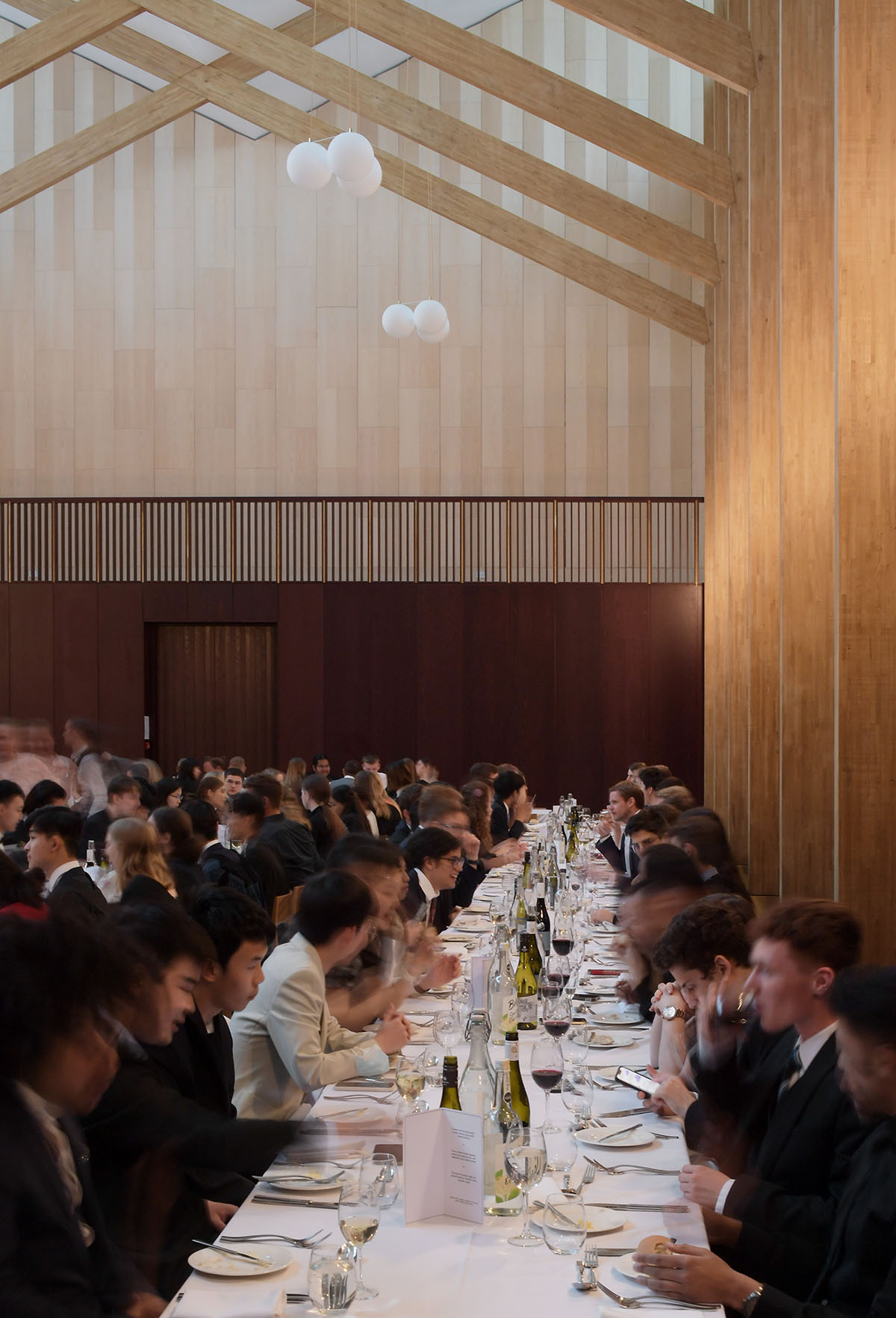 The new dining hall forms its distinctive language with undulating mantle of green faience, a traditional form of handcrafted glazed ceramic tile originating in Italy, but popular in the UK from the 1860s, and found on many Victorian public buildings.

The studio used 3,200 tiles to reveal high-level clerestory glazing that is illuminated from the interior at night. It gives the building a glowing presence when viewed across the grounds.

For the design of façade, Feilden Fowles worked closely with Darwen Terracotta, one of the UK’s few remaining architectural ceramics fabricators, to carefully test and develop the glazes. The relief of the faience echoes formal motifs of the Gothic Revival Great Hall built in 1889 and its elegant spire, as the studio emphasized.

The final colours and textures complement the College’s existing material palette, consisting largely of red brick with sandstone details and moments of embellishment such as the lead and green oxidised copper flèche crowning the Great Hall.

Guests access to the building via two principal entrances: the College entrance, which is on axis with the Great Hall and Griffin Bar, and a public entrance from Harrison Drive – into the buttery, the heart of the building and a communal gathering space that forms an anteroom to the primary space, the dining hall.

The interiors of the hall are much more attractive and interesting and need to be discovered in detail.

The structure is made of a sweet chestnut glulam timber frame and butterfly trusses, which evokes traditional collegiate halls. On the other hand, a typical pitched roof is reinterpreted as a valley-shaped modern roof.

While the timber frame was fabricated offsite, the structure was installed by a family team using traditional handcrafted carpentry joints fastened with oak dowels between the columns and beams.

"The architecture celebrates the integrity and inherent beauty of materials and craftsmanship, where ornamentation is a product of the natural beauty and imperfection of the handmade," said Feilden Fowles.

"It also embraces new methods of construction and engineering technologies of today, such as the use of parametric modelling to develop the faience façade – an Arts and Crafts of the 21st century," the studio continued. 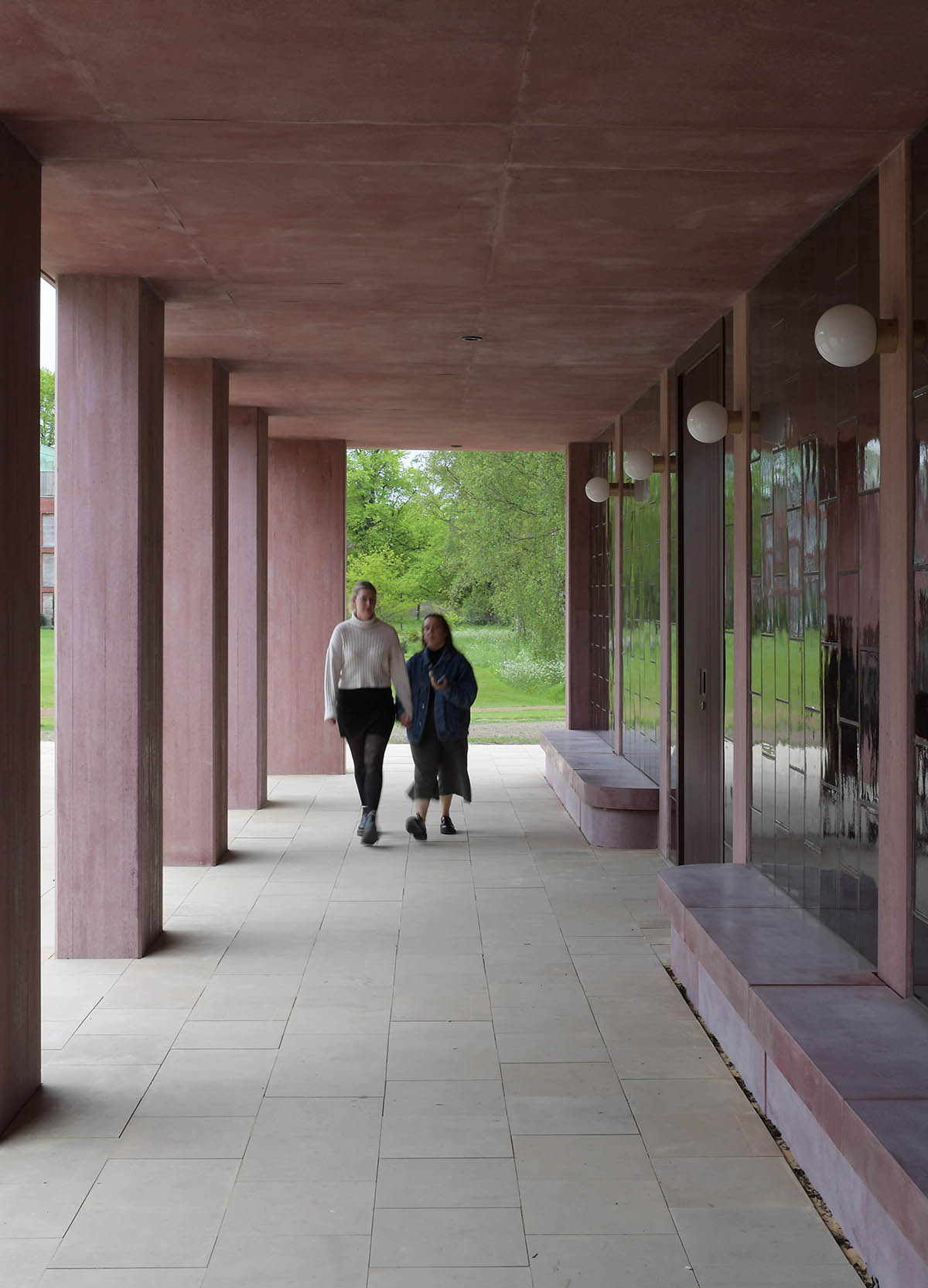 "Our new dining hall is a beautiful beacon"

"Our new dining hall is a beautiful beacon which from the outside speaks to our ambition and values, and on the inside provides space for our students, Fellows, staff and guests to have conversations, debates, music, theatre and of course, fine dining, all under this magical roof," said Lord Simon Woolley, Principal of Homerton College.

The studio paid much attention to sustainability and environmental impacts of the project. According to the studio, the building has been designed and detailed robustly for a minimum 100-year lifespan.

The team worked with sustainability consultants of London-based firm Max Fordham and created a bespoke sustainability matrix, applying no fewer than 22 targets that exceed best practice.

The all-electric building is passively ventilated and uses a ground source heat pump that reduces CO2 emissions from heating and hot water by approximately 40 per cent.

The ground floor is defined by a pigmented in-situ concrete plinth, using 50 per cent GGBS (Ground Granulated Blast-furnace Slag) cement replacement. Columns are designed on a 3m x 3m module which lends a quiet, rational order to the plan.

The columns wrapping the base of the hall continue their rhythm internally to define other key public areas; the buttery, reception and servery. The kitchens and staff facilities are placed on the back side of the house, which are linked to the front of house with highly functional circulation and servicing connections.

The brick exteriors of the back of house buildings address Harrison Drive and are animated with Flemish brick bond and creasing tile details, again making reference to the nearby Ibberson Building. 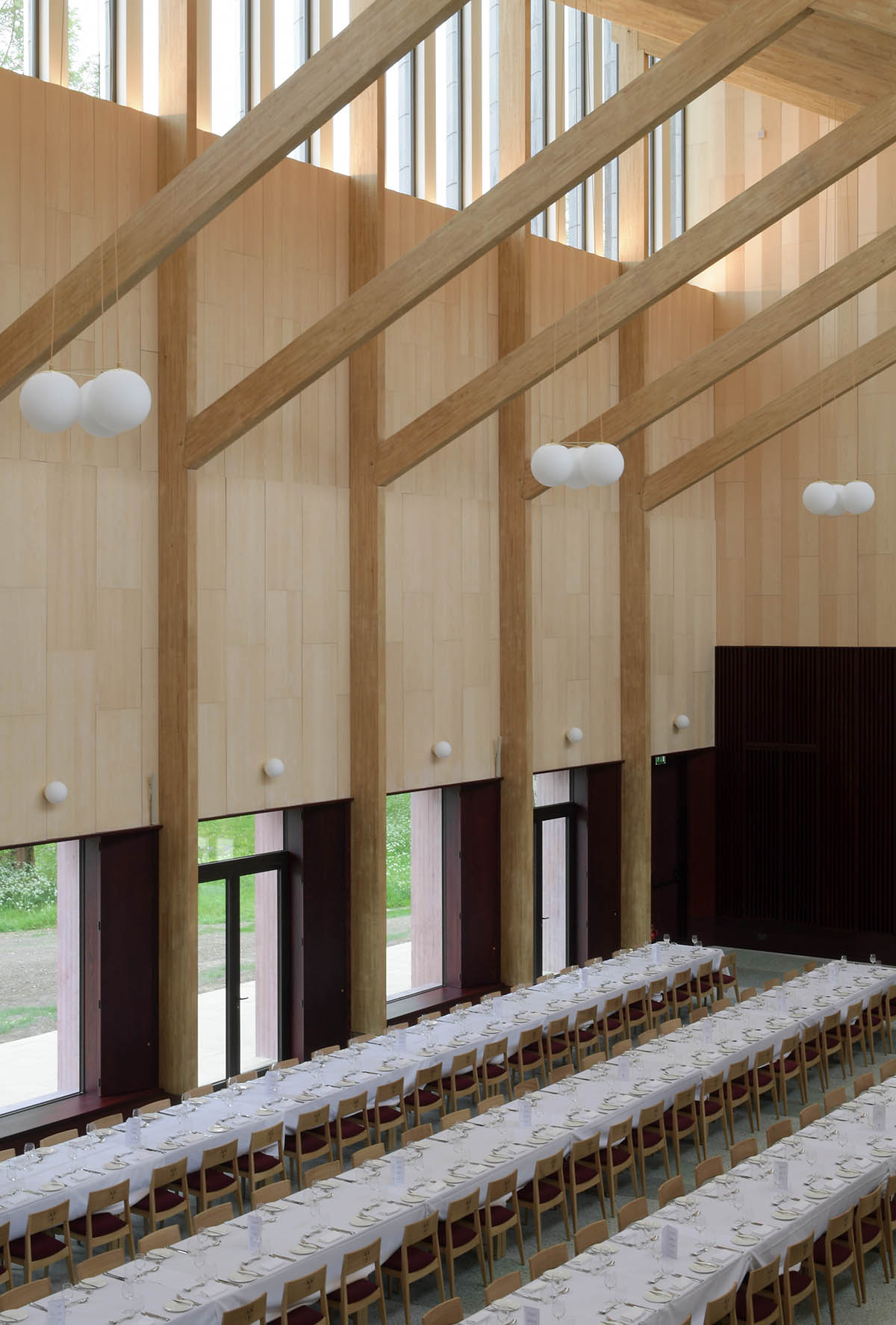 By offsetting the volumes of the kitchen and hall, creating abundant daylight and views out, the new catering facilities offer high levels of staff welfare, supporting a welcoming and efficient catering operation. In contrast to the College's previous dark and narrow servery, the new servery space is generous and naturally lit with views to a newly formed western courtyard.

Hand craftsmanship is highlighted in ‘Golden Apples of the Sun’, a site-specific artwork for the dining hall by Shezad Dawood.

The piece comprises three parts: a series of hand- sculpted brick headers on the Harrison Drive elevation marks the entrance; a seven-metre wide ceramic landscape based on the College's apple orchard has been created for the new reception area; and a short film combines footage of the campus orchard through the seasons with images from the making of the artwork and from the North Devon source of the clay. Like the building, the work responds to Homerton College’s unique history and context. 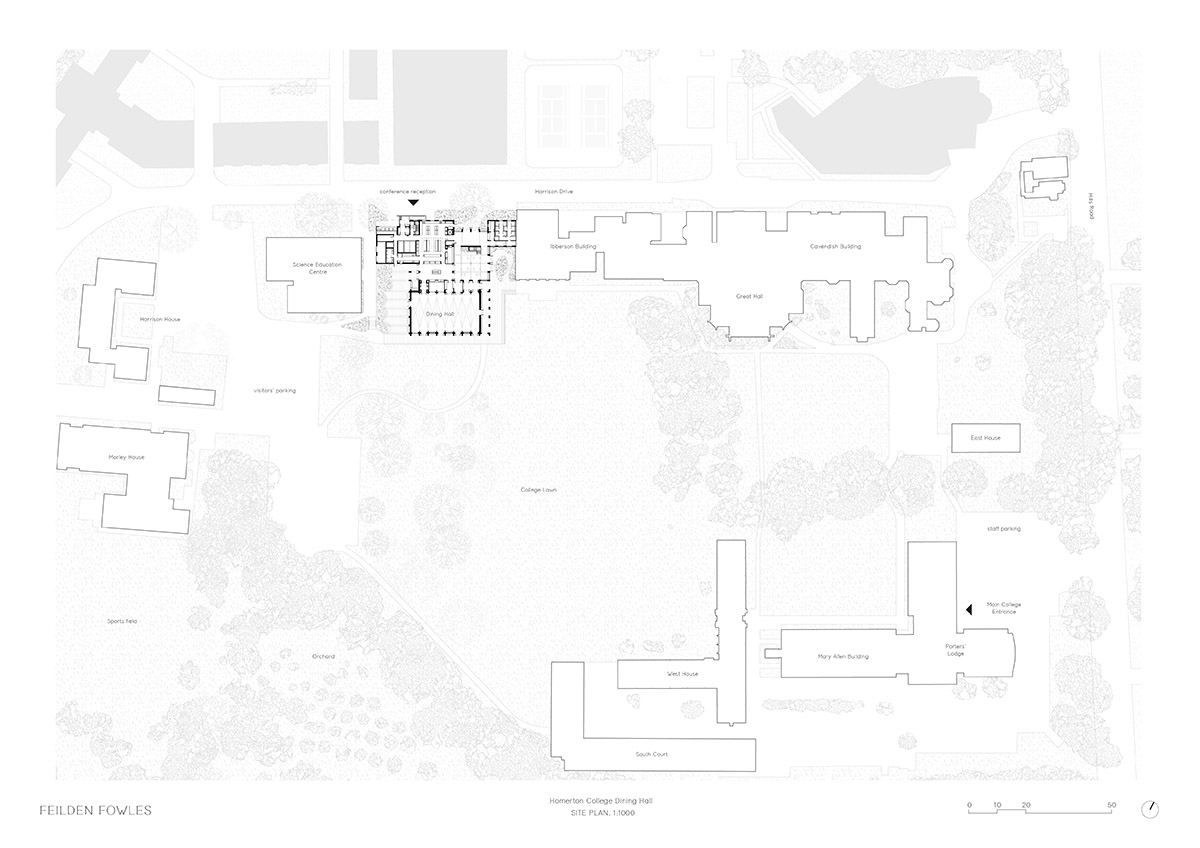 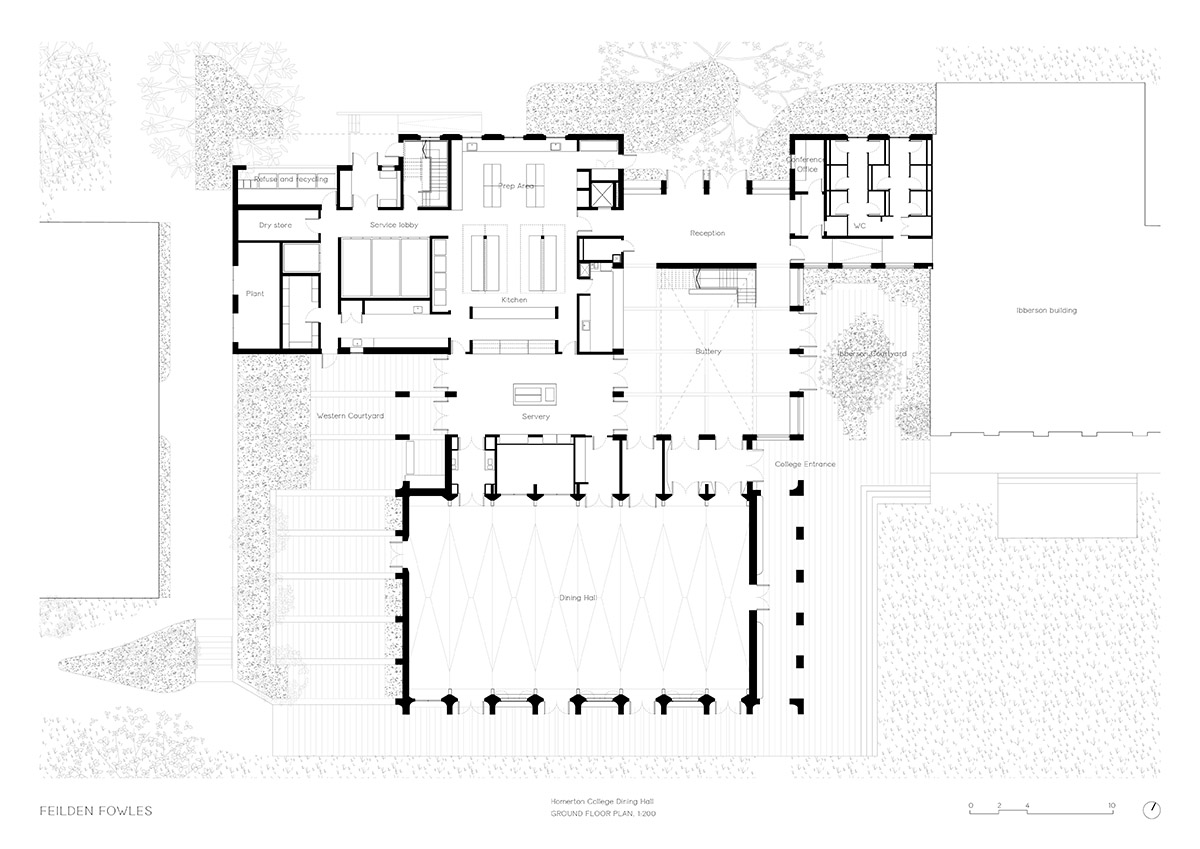 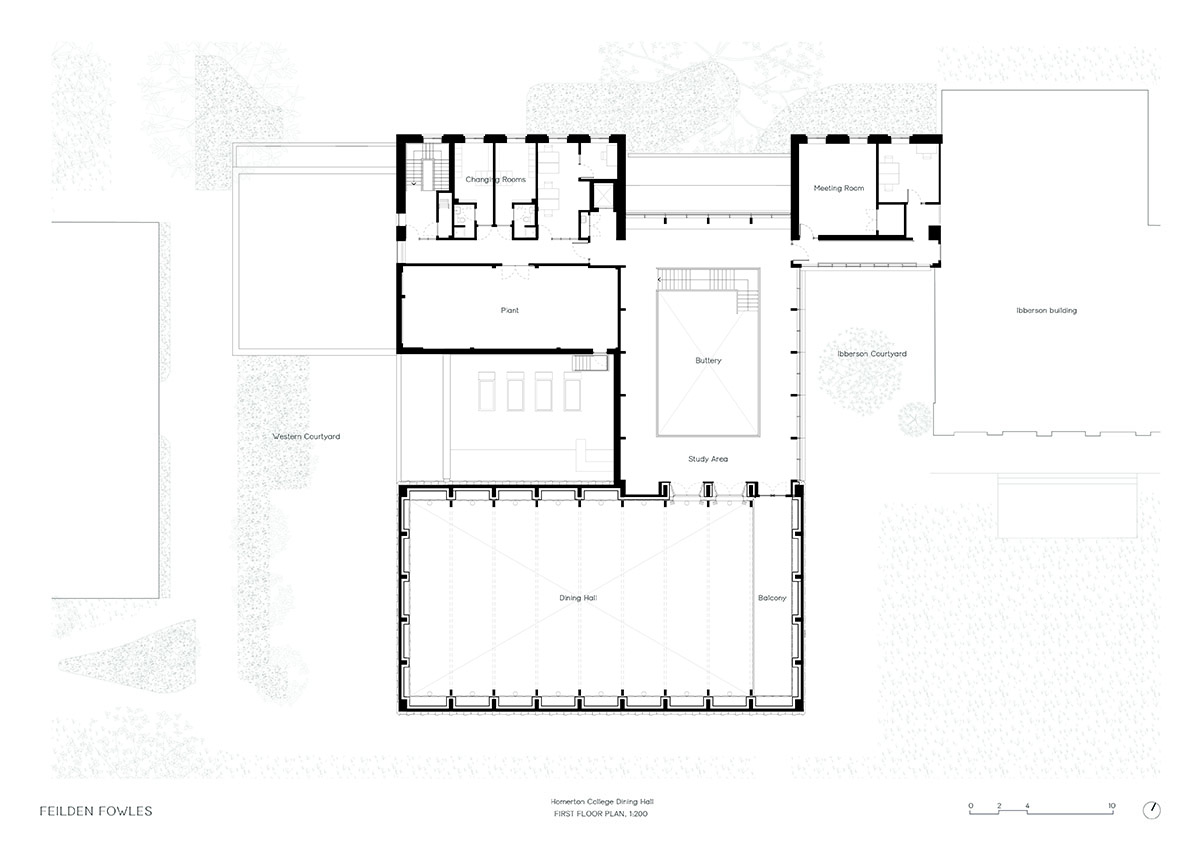 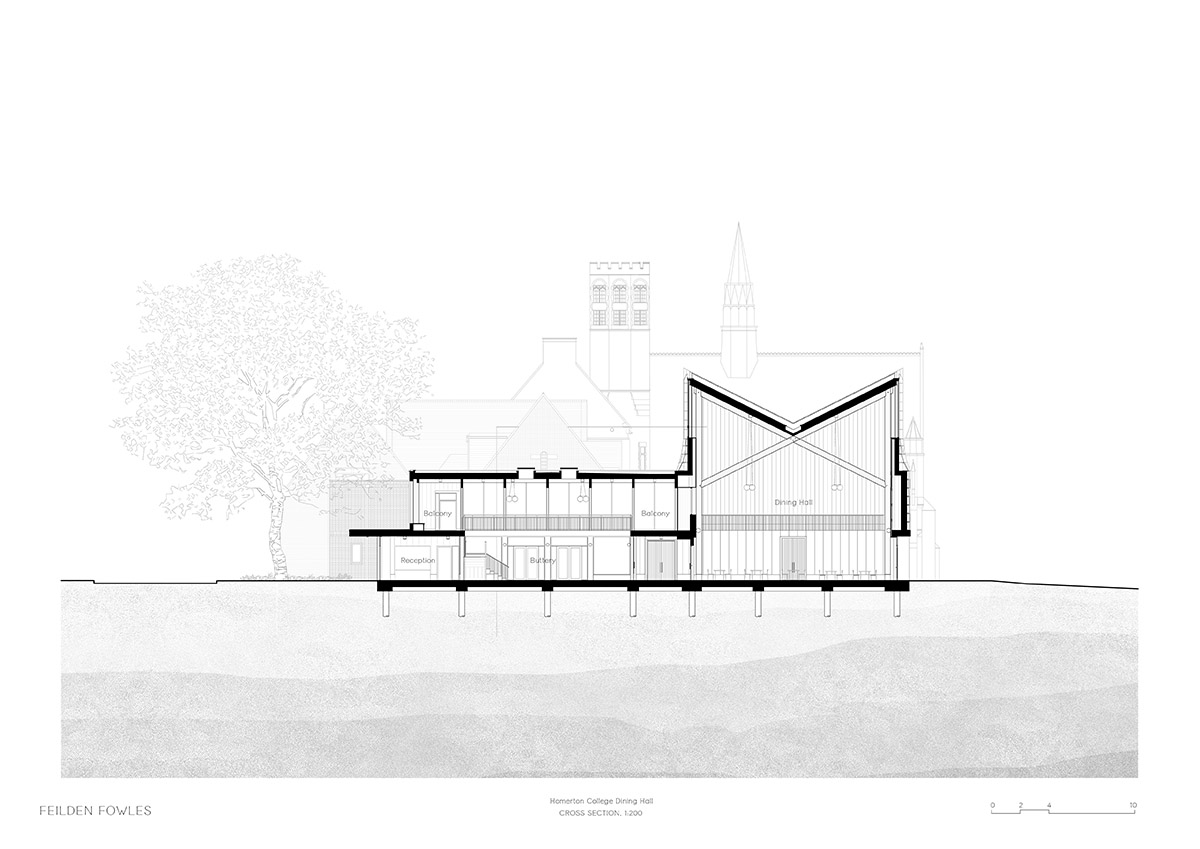 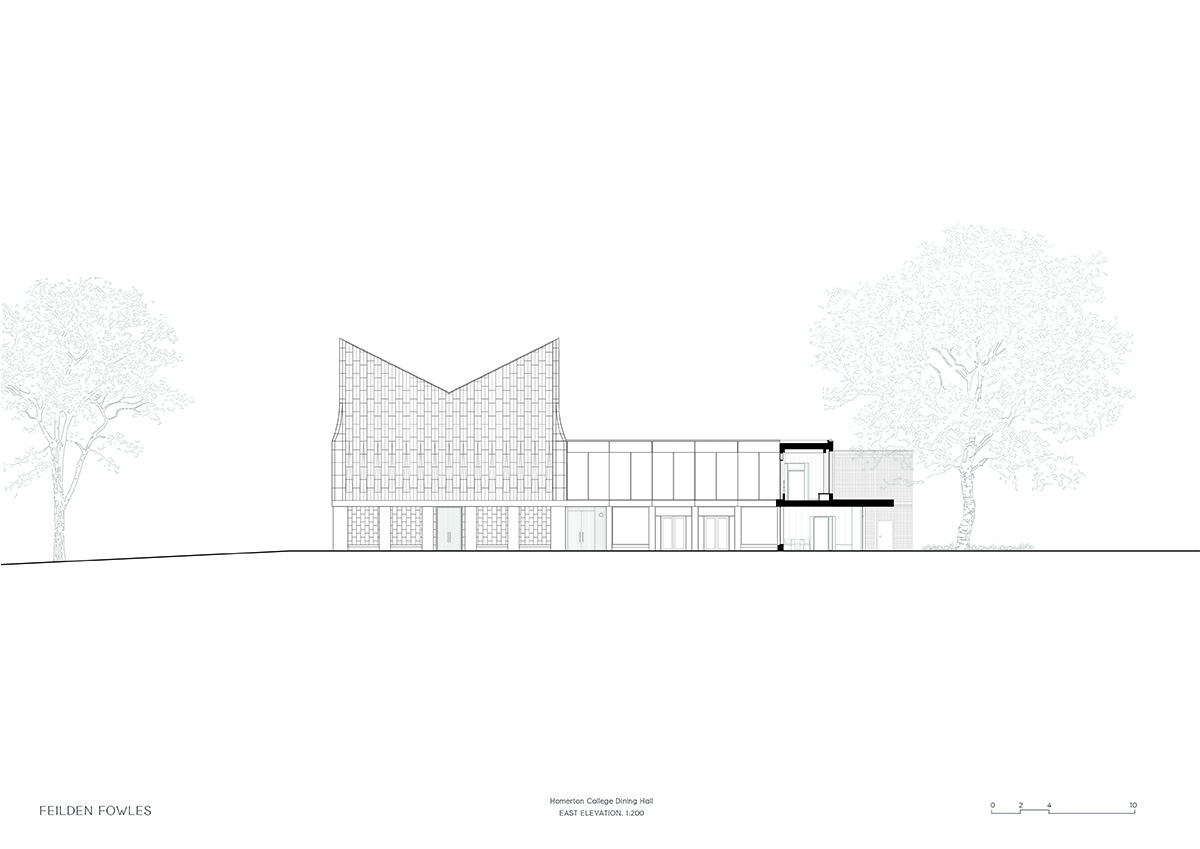 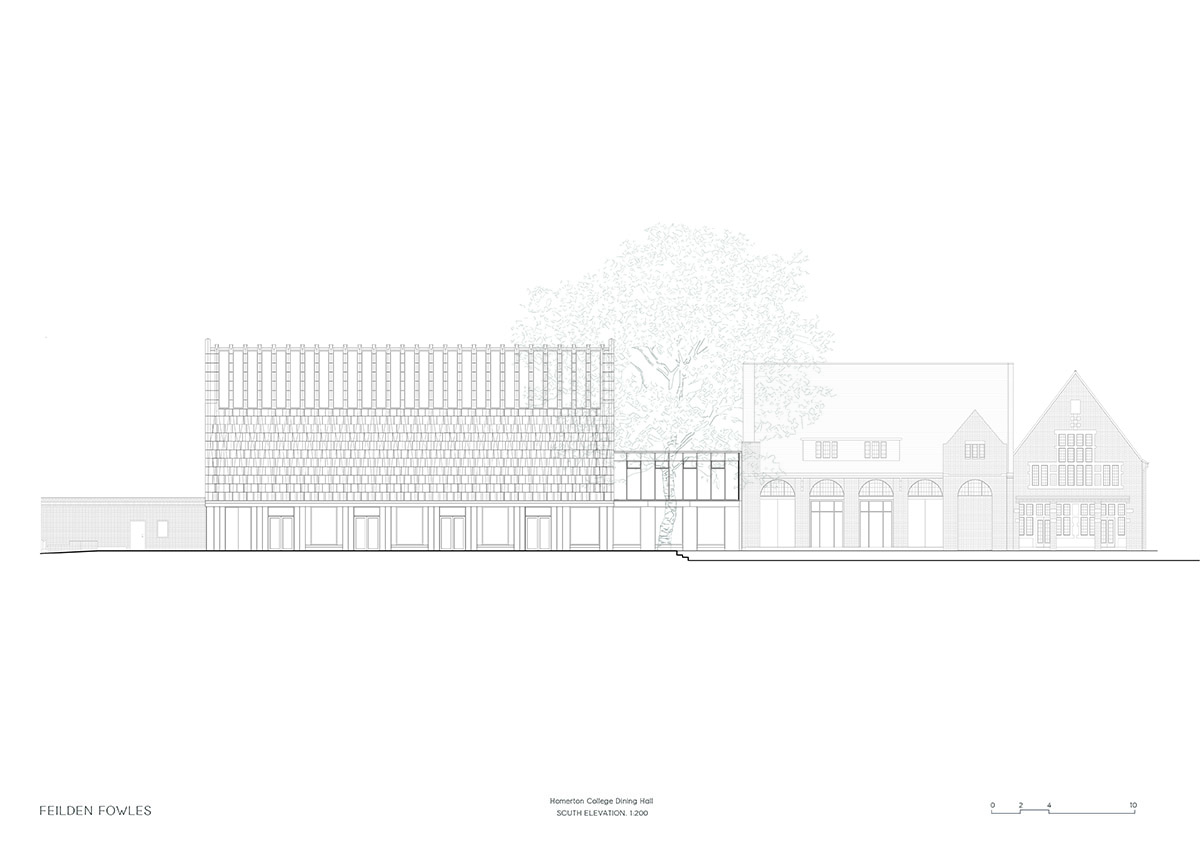